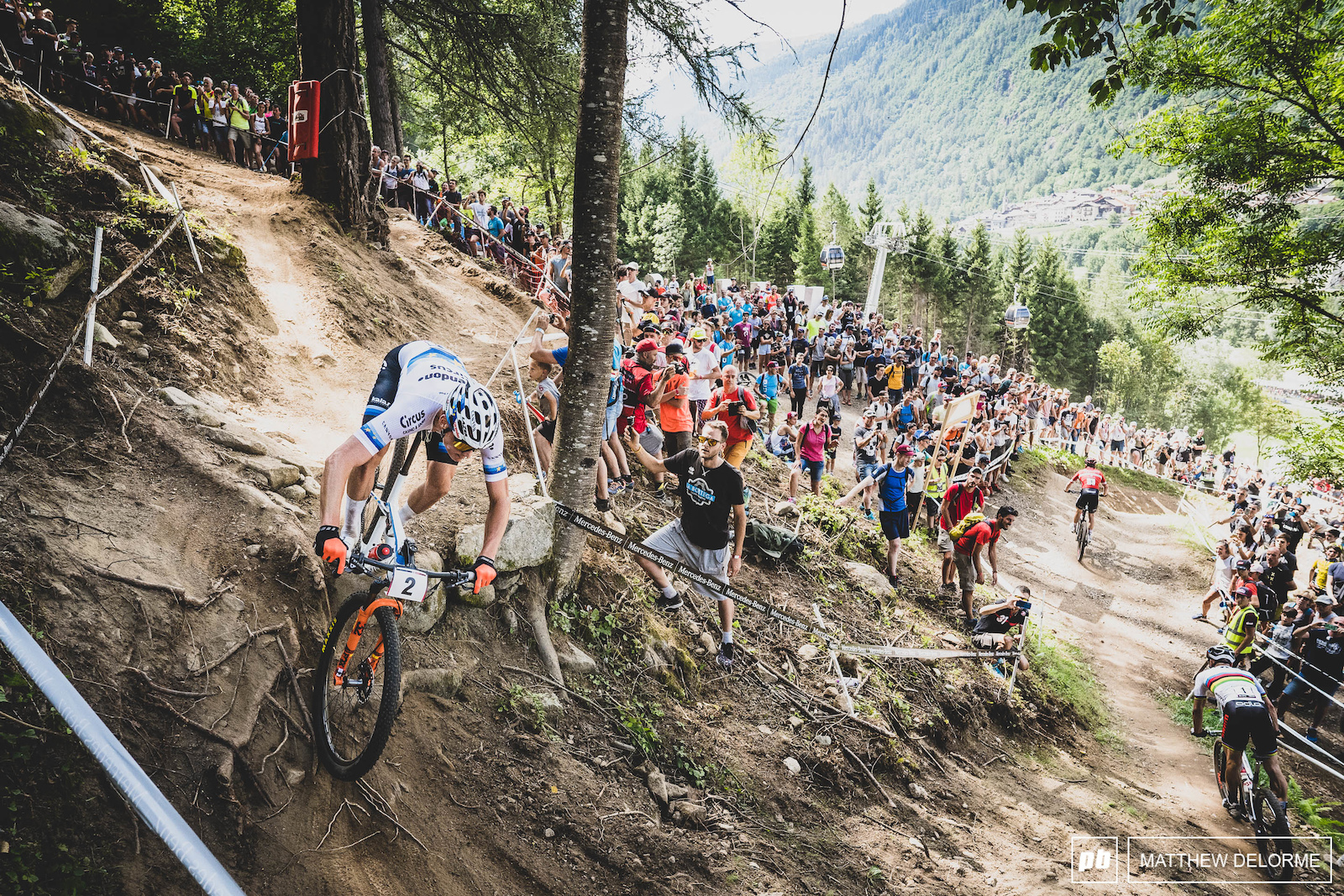 After some incredible World Cup and Olympic racing, it is now time for the world's best to fight it out for the coveted Rainbow stripes.

So what can we expect to see from the World Champs in Val Di Sole? The week of racing will see the first XCC Short Track World Championships alongside the standard Junior, U23 and Elite XC racing. Loana Lecomte has dominated the World Cup racing this year, but she will be back in the U23 category this week. Loana will be hoping to retain her U23 title from last year. Loana's absence from the Elite racing will let some of the other riders rise to the top, but after her incredible Olympic performance, everyone's eyes will be on Jolanda Neff for the top spot this week. In the Men's racing, Thomas Pidcock and Mathieu Van Der Poel are not racing this week in Val Di Sole, meaning we are most likely in for some big moves and potentially surprising results. Although going on his current form, the biggest favourite is Mathias Flueckiger.


The DH course has seen some changes for this year's World Champs and while we haven't seen anything from the XC course yet, we wouldn't be surprised if they have made some changes there as well. Here is a closer look at the Val di Sole course from the last time we saw XC racing there in 2019.


What Happened at the 2020 World Champs

Riders faced horrific conditions at World Champs last year, the biggest challenge was staying upright. In the Elite Women's racing, Pauline Ferrand Prevot led from the start and dominated the race with a massive three-minute winning margin. Second and third place went to Eva Lechner and Rebecca McConnell respectively after an exciting sprint to the line.

The Elite Men's race saw Jordan Sarrou fight his way to the front of the race to take his first Elite World Championship title as Mathias Flueckiger crossed the line in second and Titouan Carod 55 seconds back in third place.


What Happened at the Last Val Di Sole World Cup

Last time we were at Val di Sole for an XC World Cup in 2019, we saw some incredible racing on a flat out and dusty course. Pauline Ferrand Prevot just managed to pull ahead of Jolanda Neff in a race to the line as she won by just a second. Jenny Rissveds came closest to the top two, 1:01 back from Pauline. For the Elite Men, it was Mathieu Van Der Poel who dominated the men's field with a win of over 18 seconds against Mathias Flueckiger. Nino Schurter closed out the top three, 53 seconds off the pace.

The Elite Women faced some very tough conditions in Les Gets with persistent rain and sticky mud. Loana Lecomte once again dominated the race with the lead from the early laps to the finish line. Jenny Rissveds managed to secure a second-place finish after a big crash at the start of the race and some trouble with the conditions. Evie Richards was a rider looking very confident on the tricky course, attacking on the descents and pushing hard for a third-place result. World Champion Pauline Ferrand Prevot once again didn't have an answer for Loana Lecomte, finishing fourth.

There was another dominant rider in the Elite Men's racing as Mathias Flueckiger controlled the speed from the start and looked at home in the wet conditions. Ondrej Cink tried his best over the seven laps to close in on Mathias with some huge efforts up the climbs, but in the end, he had to settle for second place, 25 seconds back. World Champion Jordan Sarrou battled with Alan Hatherly the whole race, but a mistake from the South African on the final section of the track gave Sarrou a third-place finish.

Weather Forecast
The forecast for this week is looking pretty good, although even just a bit of rain the day before the race and in the afternoon on race day for Elites could make the course more difficult for the riders.

Weather forecast as of Monday, August 23. Live updates from AccuWeather. 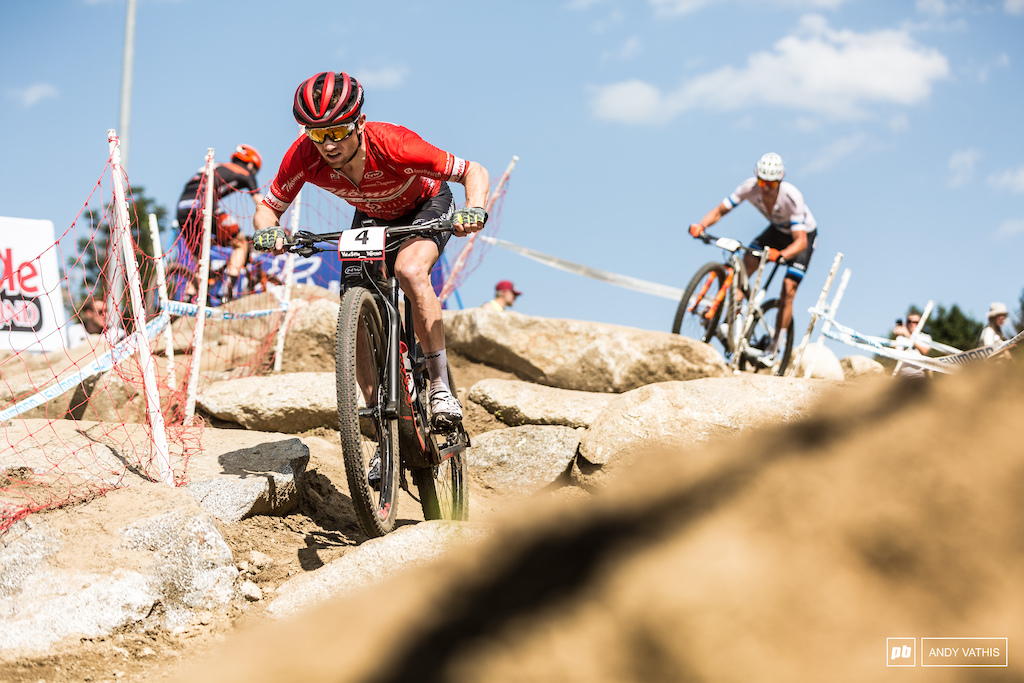 
Note: All times are local and subject to change by the UCI/event organiser. 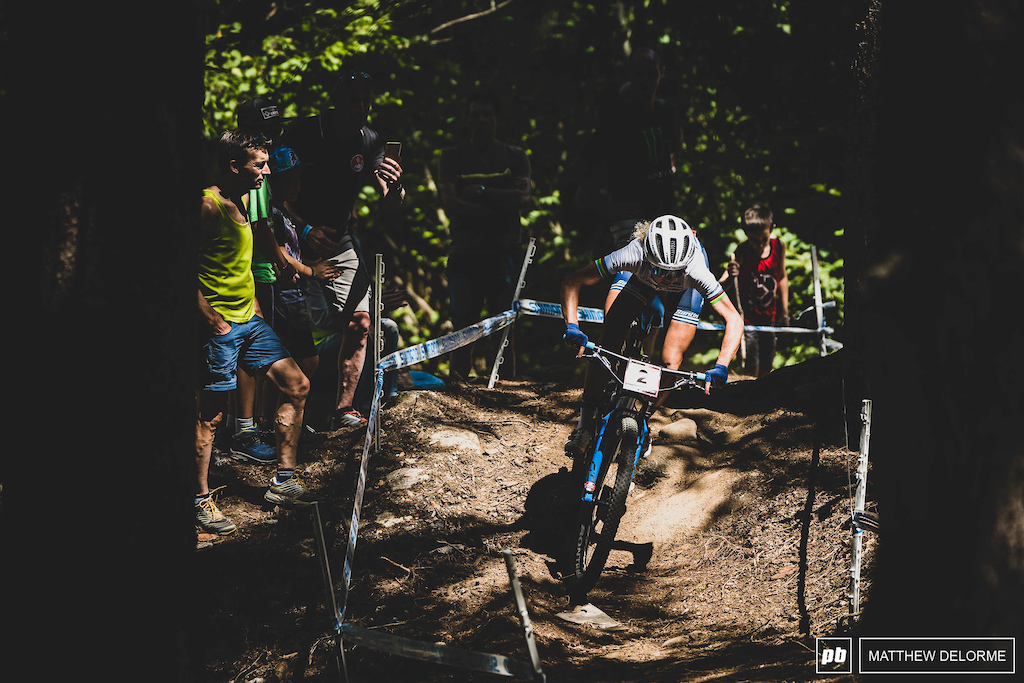 Pinkbike will be providing you with the best daily coverage from our team of photographers in Val di Sole this week. Tune in to Pinkbike to catch photo epics, results, news and tech.

Pinkbike Predictions
"Mathieu Van Der Poel and Tom Pidock aren't competing in the MTB World Championships, so we're placing our bets on Mathias Flueckiger to take his first Elite title. Mathias has been on top form this year and while he may not have taken the gold medal in Tokyo, he still walked away with a silver medal. Another top rider this year has been Ondrej Cink who has been closely battling Mathias Flueckiger at a couple of races this year. Cink had to pull out of the Tokyo Olympics race after a flat tire, but we think he will be back and looking for a first World Champion title. Closing out our predictions is Nino Schurter. Nino has been off the pace this year, but he does look to be getting closer to the top of the results and with eight wins at the past 12 World Championships, he is impossible to write off this week.

As for the women, the clear choice is the new Olympic Gold medalist Jolanda Neff who put down an incredible performance in Tokyo to pull a 1:11 lead on Sina Frei. Loana Lecomte will be racing in the U23 race this week so we think Jolanda has a great chance of building on her Olympic victory with the Rainbow stripes. Pauline Ferrand Prevot is another rider who could have a season-best performance this week as she comes off winning the European Championships and will be looking to hold the World Champion title after two back to back wins. Lastly, we think Sina Frei could be a contender this weekend after taking a silver medal at the Olympics."

DBone95 (Aug 23, 2021 at 18:46)
I just wanted to say a heart felt THANK YOU Pink Bike for your XC coverage. You are really doing a great job and I know I'm not alone in appreciating it. My wife and I are going to Snowshoe and I can't wait!

jspier (Aug 23, 2021 at 19:24)
Looks like it's time to do some more electronic travel thanks to the VPN I set up after last year's very helpful and coincidentally timed article on Pinkbike. If anyone needs me, I'll be in Vietnam - www.pinkbike.com/news/how-to-watch-the-2021-mountain-bike-world-championships-from-val-di-sole.html

coverage is a lot better than it used to be...

gcrider (Aug 23, 2021 at 18:17)
Interesting that Neither Victor Koretzsky or Nino Schurter entered in XCC
Will this help their chances given only 45hrs recovery for the others for XCO ??

Augustus-G (Aug 23, 2021 at 22:34)
It's too bad you can't watch the Team Relay anymore. Really fun to watch. I think the last that was freely available was the 2018 WC's. It hope it comes back but I'm afraid it's Wishful Thinking at best. I think Jenny Rissved's name needs to be added to that World Champions list. I'd also be gassed to see little Sina win it too.

bohemi (Aug 24, 2021 at 4:41)
From val di sole : track is a lot different from the precedent round there, it's steeper for the climb and more technical.

handynzl (Aug 23, 2021 at 23:26)
@notsofastoverfifty: Yeah nah, mate. Sky TV with the two numpties from the Olympics calling the races. Think they were bad for XC race, waaaay worse in DH

gcrider (Aug 24, 2021 at 2:24)
Did the VPN thing a couple of years ago. But redbull was unwatchable due to it freezing all the time. Better luck this year I hope @handynzl:

magnusc (Aug 24, 2021 at 5:21)
I almost fell asleep during that course preview. So much gravel and grass and almost all tech stuff is just rolling down hill.