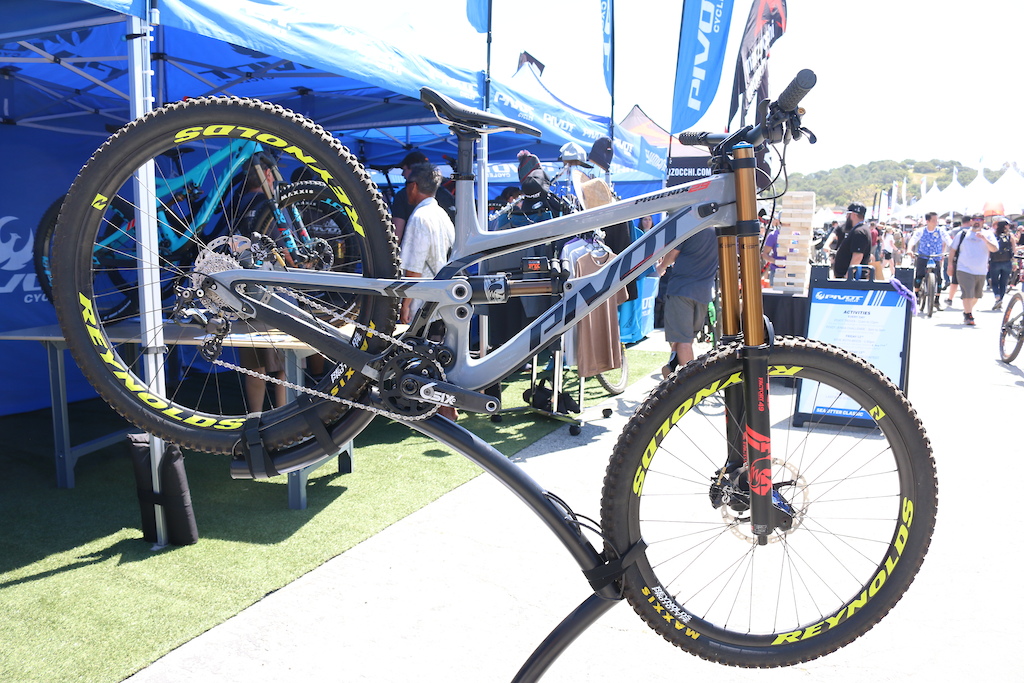 Pivot's Rupert Chapman was spotted at Crankworx Roturua on an aluminum prototype 29er downhill bike only a few weeks back, and now they've shown up at Sea Otter with a carbon fiber version that Bernard Kerr has been riding. This one isn't production - that's still a ways out - but it sure looks like its ready to go.

The suspension is still a dual-link layout from Dave Weagle, of course, but the shock is driven by a short link that's tucked up into the middle of the seat tube rather than a yoke that wraps around the frame. There's also a set of offset inserts at the upper link that can be rotated to adjust the new bike's geometry, although there's no word on if that's just to tune the proto's geometry or if it'll make it to production. It's probably light as hell, too; the last Pivot downhill bike we had in for testing weighed just 34lb! 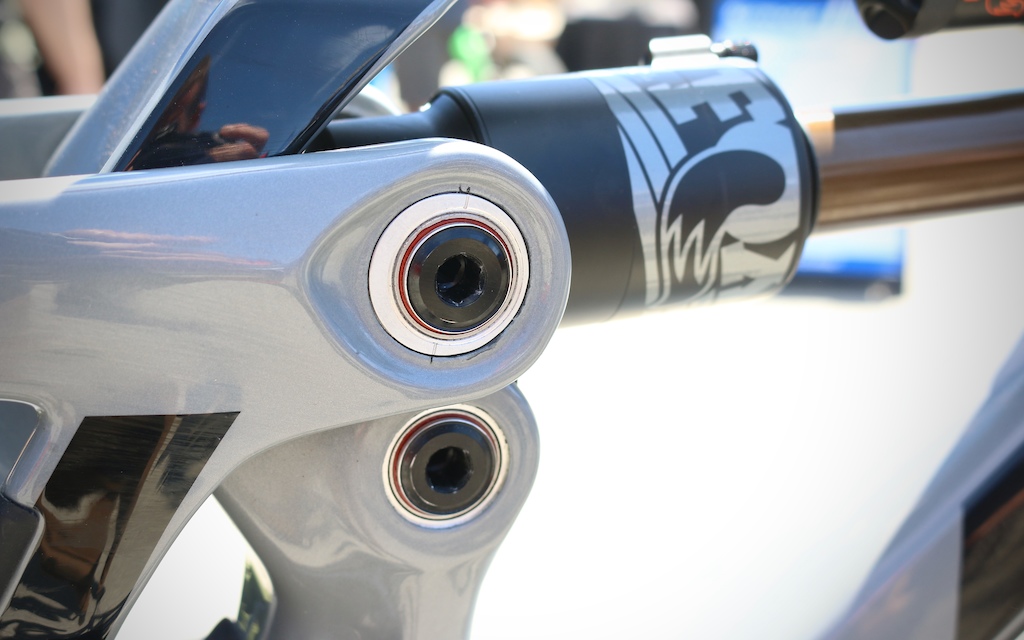 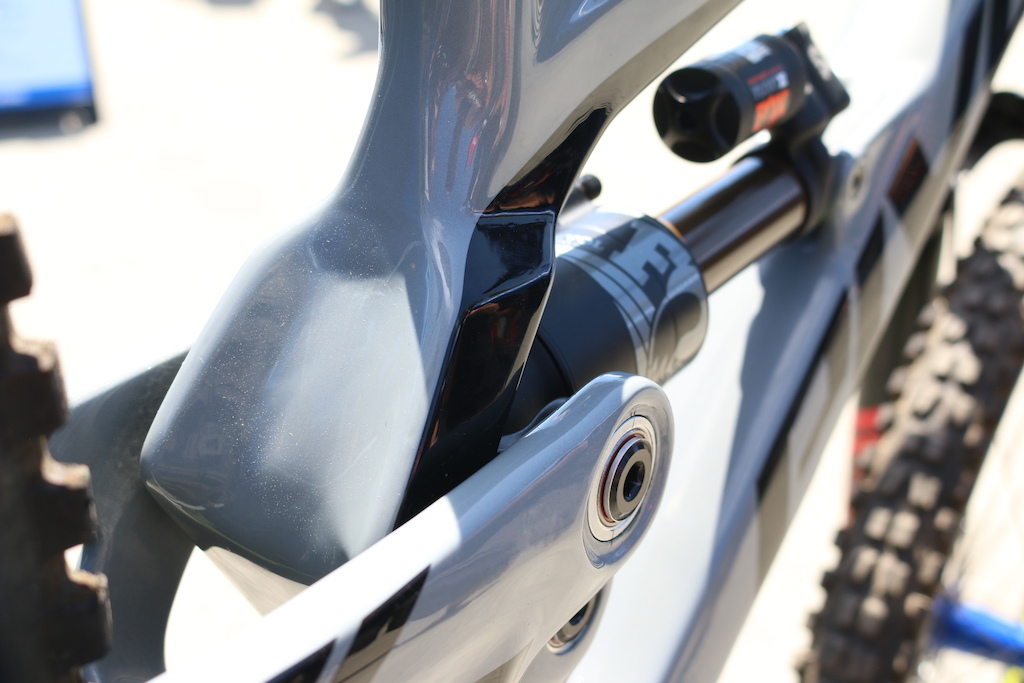 Details include a set of geometry-adjusting inserts (left) and a shapely backside to the seat tube for added tire clearance (right). 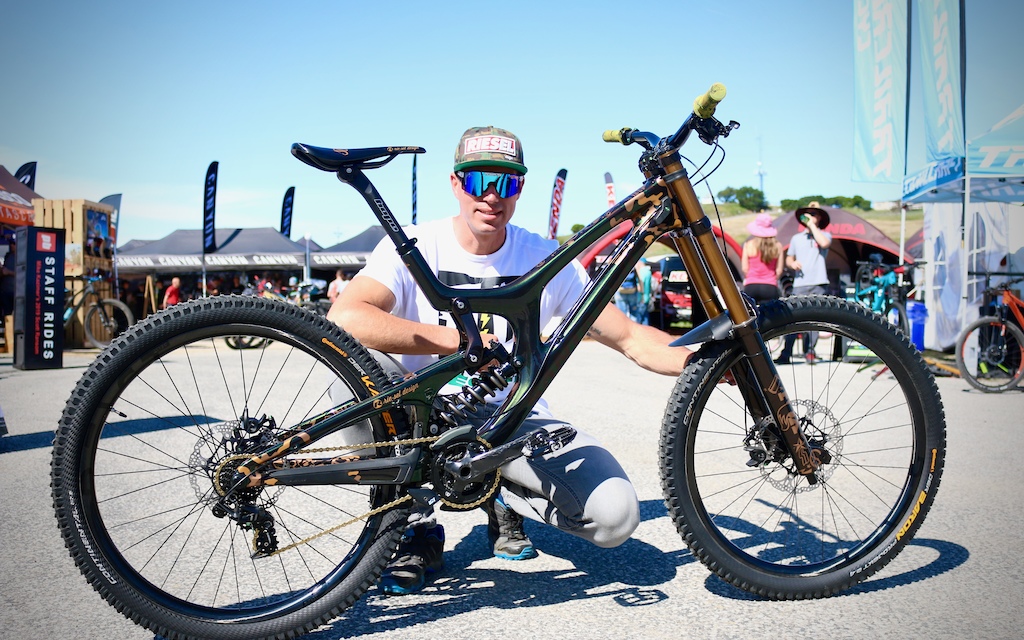 Rie:sel Design was rolling around Sea Otter with this custom painted V10 that had everyone reaching for their cameras.

Speaking of downhill bikes, this 2016 Santa Cruz V10 was done up by Rie:sel Design with a custom paint job that might be green, blue, or brown depending on the light and what angle you're looking at it from. Both the Fox 40 and carbon Stuhl seat received the same treatment as well.

Rie:sel has a catalog full of colorful frame protection, too, but it was the Hopp carbon fiber air cap and damper adjustment dial that caught my eye. They're probably a smidge lighter than the stock alloy knobs but let's be honest with ourselves for once and admit that it's not really about that, is it? Of course not. Hopp is a German company that offers very light, very expensive carbon hop-up parts to save grams from a bunch of different places on your bike. 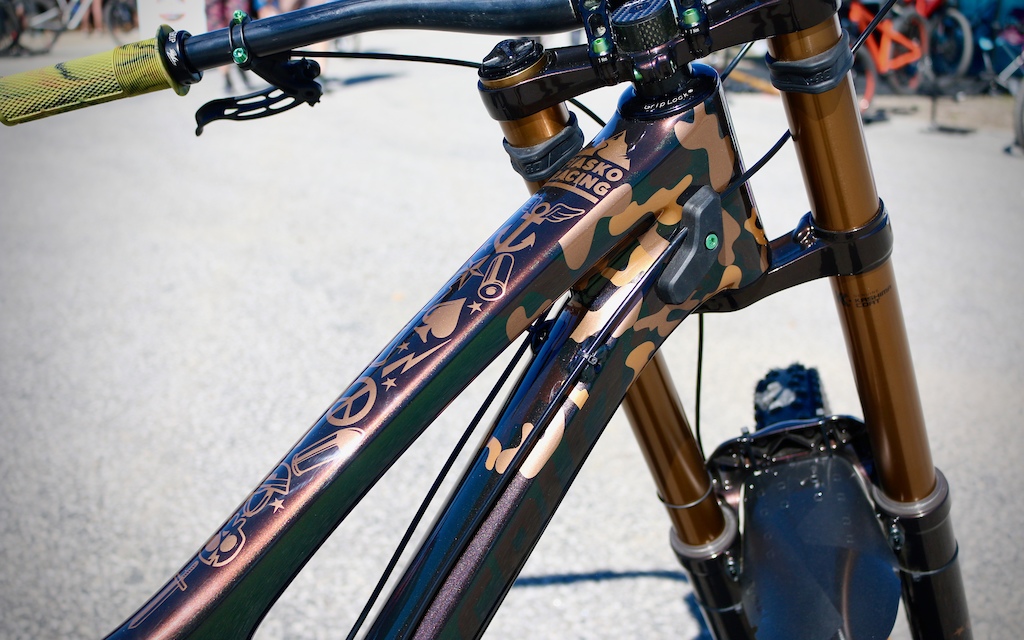 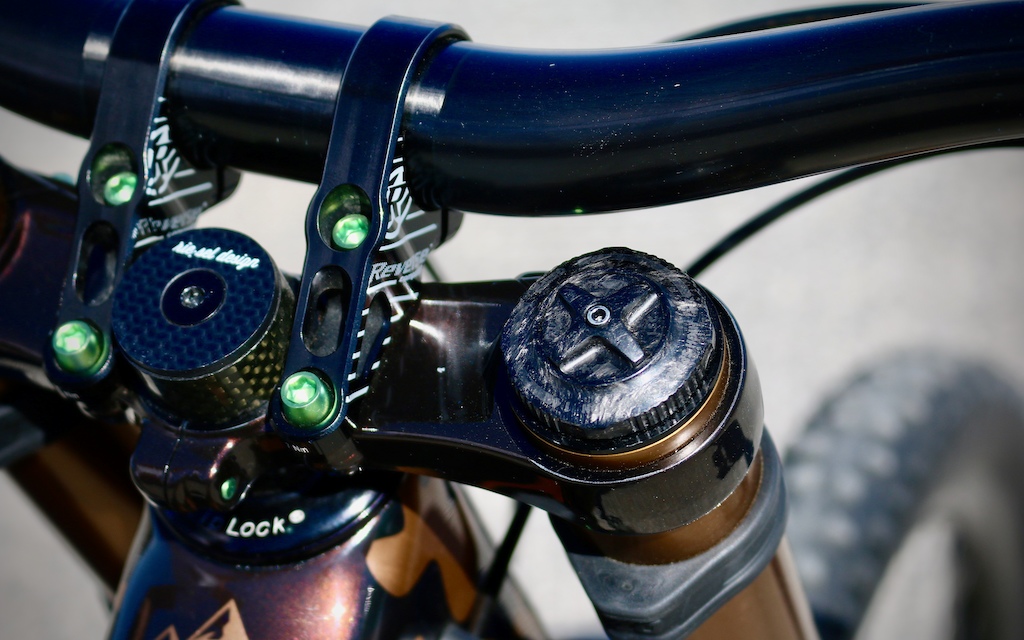 Custom paint and carbon dials might be the zenith of bike dorkery. I want both. 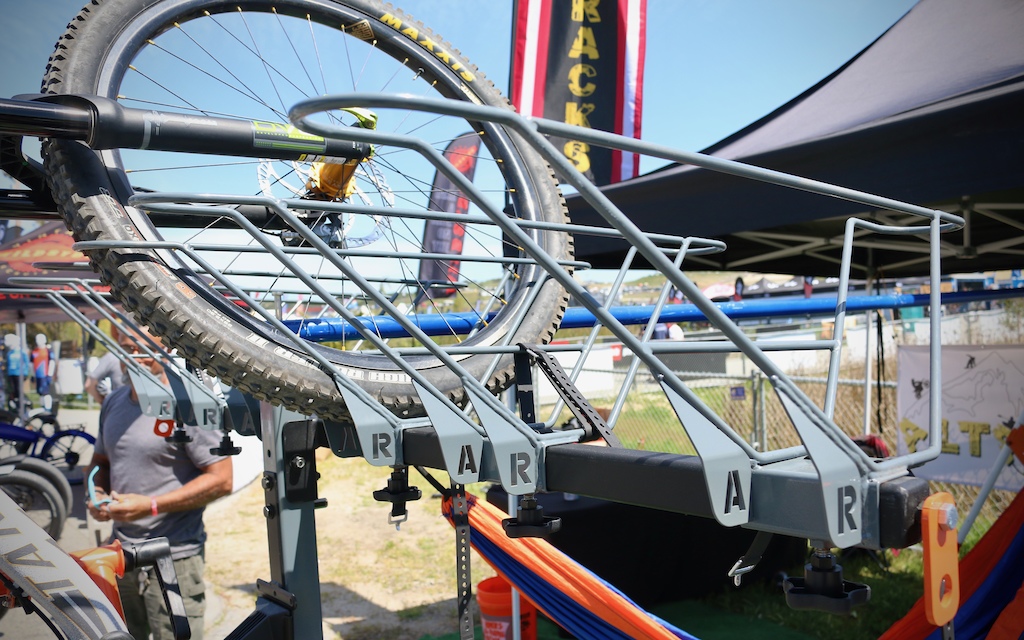 Alta Rack builds its sturdy carriers in Utah, and you can choose from four or six-bike models.

The goal of the Alta Rack is to make sure that the only part of your bike that's touching it is the tires. Instead of frame or tire-grabbing arms, the front wheel slots into a basket and the rear is strapped down to the lower crossbar. There are other racks that take the same approach, but the Alta has a few features that are worth checking out, especially the adjustable trays.

A dial on the underside of each tray can be backed off to let you move each one side to side, so there shouldn't ever be any bad touching between bikes, and the trays come in a few different sizes that'll play nice with wheels from 20" to 29" in diameter and all tire widths. 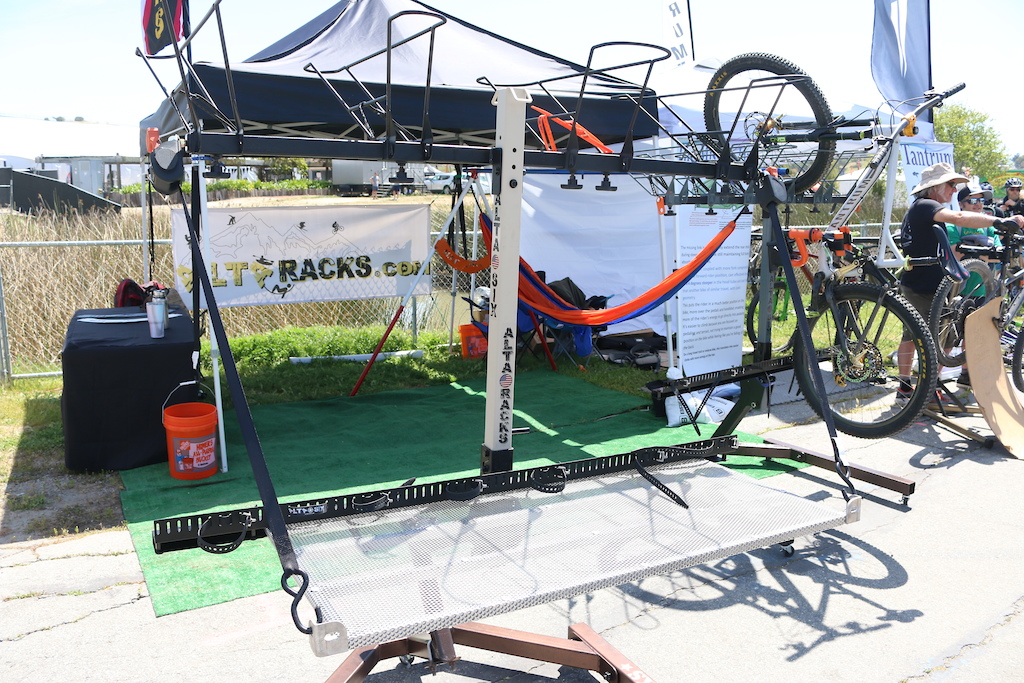 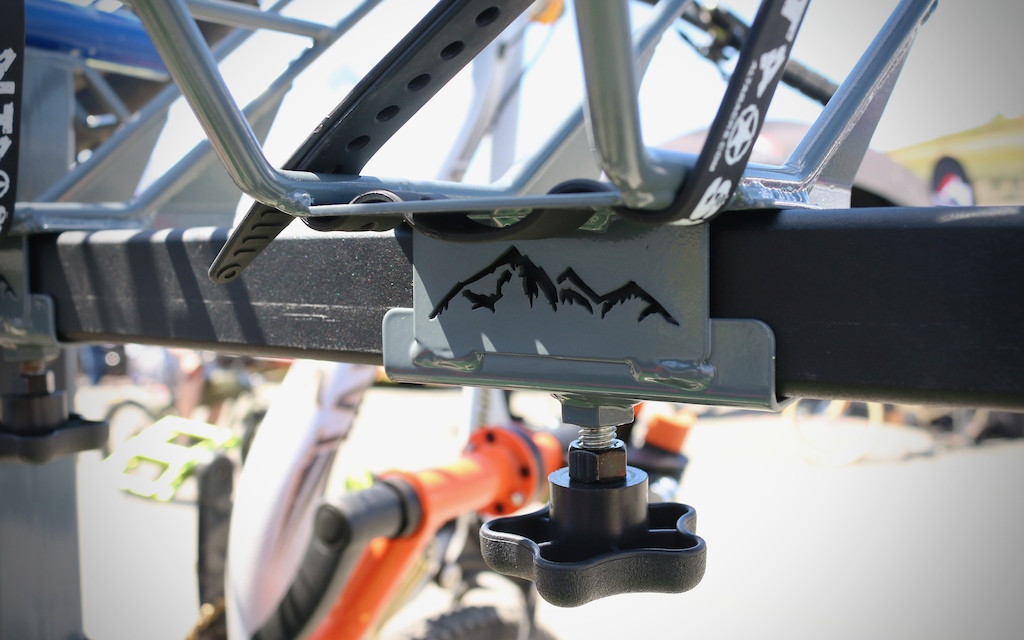 You can even get a fold-down table that's supported by straps, and the trays are adjustable from side to side for the most clearance possible.

The thing looks burly, too, with large square steel tubes, huge hardware, and hitch that's angled upward for extra ground clearance. Optional bolt-ons include a repair stand that slots into an adapter on the rack's face, and a fold-down storage tray/table that's supported by two tie-downs. Each rack is manufactured in Utah, and the four-bike version pictured here goes for $985 USD. If you have more friends than me, you can pick up the six-bike model for an extra $200 USD.

heavyp (Apr 14, 2019 at 2:17)
First look of the prototype Pivot when you guys released an article on the 18/03/19 showing it in a video and did photos of the bikes in NZ in another article, not really a first look more like Click Bait once again

sewer-rat (Apr 14, 2019 at 4:44)
@tobiusmaximum: I think my sarcasm was lost in text, in short anything can be expensive however you look at it

AnimationNathan (Apr 15, 2019 at 8:33)
North Shore Racks are cheaper, in price and other ways.... But I've heard Yakima is also making a version of something like this for cheaper as well.

drunknride (Apr 15, 2019 at 10:03)
@Happypanda1337: You are insane. 4 hrs welding? Did you see the welds? Apparently made in Utah means the welder is my 3 year old daughter stabbing play doh snakes in the junctions.

Happypanda1337 (Apr 15, 2019 at 12:37)
@drunknride: yea, you know it takes time to tac up the structure, right? And it’s pretty safe to assume that’s aluminum. Not that many takes twice as long to weld aluminum than carbon steel. Highly doubt the kids who designed this were smart enough to put tabs in the sheet metal for weldments locations. Also you think welding is precise? I’ve seen many of the welders at my company f*ck up, 4 hours is low ball. Like I said they can charge more that $1200. You go to any job shop that hand well they’ll probably charge you $1500 for the whole job.

drunknride (Apr 15, 2019 at 14:06)
@Happypanda1337: Not trying to be a dick but you obviously know nothing about welding. It is steel. I have been a production welder and an independent welder/fabricator for almost 20 years. I know junk when I see it.

Naw the wheel trays are a big improvement over NS as far as versatility goes.

IamZOSO (Apr 14, 2019 at 10:54)
@ripcraft: For a roadbike yes but who cares about that?
NS carry's any kind of mtb with a fork. I bent the splines just a bit so it would accomadate my fatty.

KillingtonVT (Apr 14, 2019 at 15:49)
Yeah - Cody has been at it for quite a long time, has great CS and constantly is evolving the racks. Shame these guys blatantly ripped off his design.
www.pinkbike.com/news/recon-gen-2-r5-shuttle-rack-review-2017.html

whattheheel Plus (Apr 15, 2019 at 13:18)
@KillingtonVT: You know that Cody guy is from South Dakota?? East river at that!! Gross!! But he also makes some of the best racks in the game and he and I go back like our hairlines. That a long way back!!

CraineBrain (Apr 14, 2019 at 0:53)
@dimitree you speaking from experience or just talking ????!? I bought my phoenix used off pinkbike and used it hard for a season with only a couple nicks here and there but it held up great and actually just sold it to a friend for close to what i paid for it, so they have great resell value and they have a 10 year warranty. Was hard to let it go, but looking forward to the 29 model to come. Pivot is a solid company worth investing your hard earned $$$ plus they look sexy as f.

chillrider199 (Apr 14, 2019 at 1:17)
Youll be able to find a lot of people complaining about them cracking all over the place. Even pivot updated the model and it still did the same thing after they acknowledge that stuff was breaking. If your a hard rider then things can undergo serious stress.

From 2016 until now they are flawless. Amazing bikes

chillrider199 (Apr 14, 2019 at 12:18)
@norfiril: Yeah. It seems like its mixed reviews. There are tons of scientific variables as to why they could be breaking. But another part of me feels like its just luck of the draw as to who has the good frames maybe?

larryssman7 (Apr 14, 2019 at 17:58)
The recon rack is absolute garbage so hopefully this "imitator" can at least stay together for a few months.

Inspire (Apr 14, 2019 at 10:18)
Recon FTW! Owned our 5 pack for a yr and have been super stoked with it. NS6 prior and Thule T2/Kuat's as well. Great to see Cody continually innovating and making Improvements to his racks. The Alta dude came off as a prick when he was up at Wydaho 2 yrs ago poaching the expo event in the parking lot

vinay (Apr 14, 2019 at 12:08)
@lognar: It's been a cycle. At the beginning of the century it was four and six pot calipers (or two piston floating caliper) for DH, then they went down to two opposing and bigger pistons as these could apply the same amount of power. It's more recent that they went for four pistons again for modulation. Though obviously modulation isn't for DH riders exclusively. Big braking power is (as it is for trials riders). But two pistons can get you that too. I think these are Hope brakes.

stunnanumma1 (Apr 14, 2019 at 5:18)
Betting that pivot changing the yoke is a result of what I considered to be their bike's only really negative. The yoke design allowed for a small gap between the seat tube and the rear triangle. The gap was there to allow the s. Tube to squash when the rear shock engaged. Occasionally, pebbles stuck in that gap. That affected the full use of a great suspension model (the dw is the best Imo) and also scratched the frame.

On a further note: I just learned this phone auto changes "gap" to "Gap." I wonder how much the Gap paid Android for that to happen.

who-duh-thunk-it, what are you new or something?

And please, look at more V10's, this was barely worth looking at.

definitely not worth that!!! Buy a NSR for well over a couple hundred less and it’s in Canadian dollars

zyoungson (Apr 14, 2019 at 1:34)
looks like a greg minnaar bike from a few years ago when he was running tiny frame sizes

pinnityafairy (Apr 20, 2019 at 7:23)
Looks like a recycled Sherpa paint job
Below threshold threads are hidden

dimitree (Apr 13, 2019 at 23:52)
Hope the Pivot Phoenix is better than the prior models that couldn't stand up to downhill tracks...they cracked everywhere. Junk.