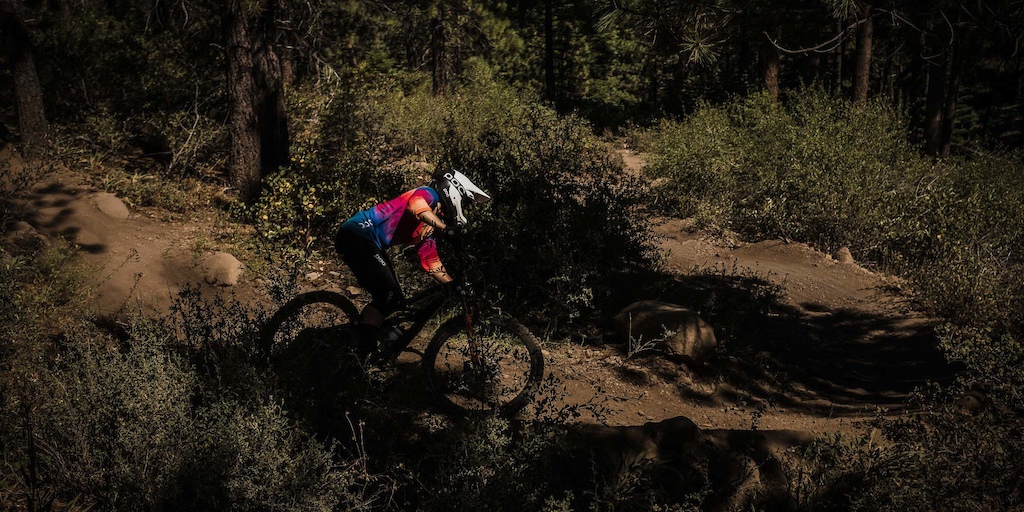 If you found yourself trail side at any of the Enduro World Series races in recent times, you would find it hard to miss a strange new shout of encouragement rising above the cacophony of ‘allez allez’, ‘vai vai’ and ‘yeah boi!’. The mysteriously sounding ‘Gowaan’, with its roots deep in the vibrant UK mountain bike scene, is now as likely to be heard in Santa Cruz as it is in Sheffield.

Its global spread may simply be a result of social media and an ever-shrinking global village, but it is equally likely that it’s rise has mirrored that of Ibis Enduro team rider, Bex Baraona, who epitomizes the shout’s energy and positivity more than most, and who has long been using it as a force for good.

“It started simply as a group of us riding and posting videos on our social media accounts. Bike edits don’t always show the simplicity and fun of messing about on bikes, and we started to encourage each other to try new things, even if it led to a fail, with shouts of ‘Go on girl’. But with our Northern English accents and slightly excited tone, it quickly became ‘Gowaan gal!’ and the genie was out of the bottle.”

It has become more than a shout of encouragement and thanks to Bex and her friends it is now a vehicle for bringing more girls to mountain biking. #gowaangals and its respective Instagram account are now a constant source of inspiration, opening up the sport to many more.

“What started purely as a bit of fun, quickly became something bigger. We knew that there was a need for more female specific riding opportunities and our goal with ‘Gowaan gal’ has been to give more back to the community, especially by building up enough funds to support female riders when they start racing.”

Next for the Gowaan Gals is the inaugural Gowaan Gals Festival. Taking place at Farmer John’s MTB Park in Marple, UK in September 2019, the festival builds on how Gowaan Gals came to be. It promises to give a supportive environment for trying new things; where more women can experience the sport and develop as riders.

Being part of the community and helping others is a trait that runs as deep as the mining seams of her native peak district in the UK. Helping her father re-build their 300 year-old smallholding was a big project but it also led the inspiration to study civil engineering. Likewise, the farm and it’s proximity to nature, motorbikes and the outdoors led to a life on a bike. 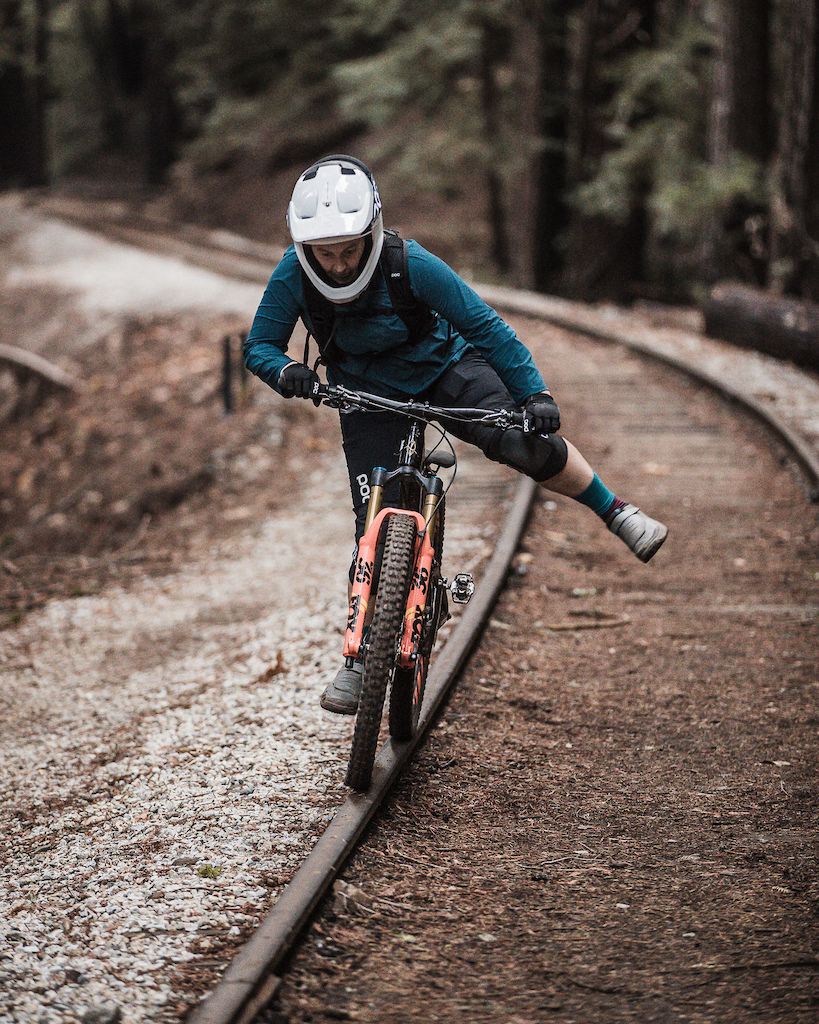 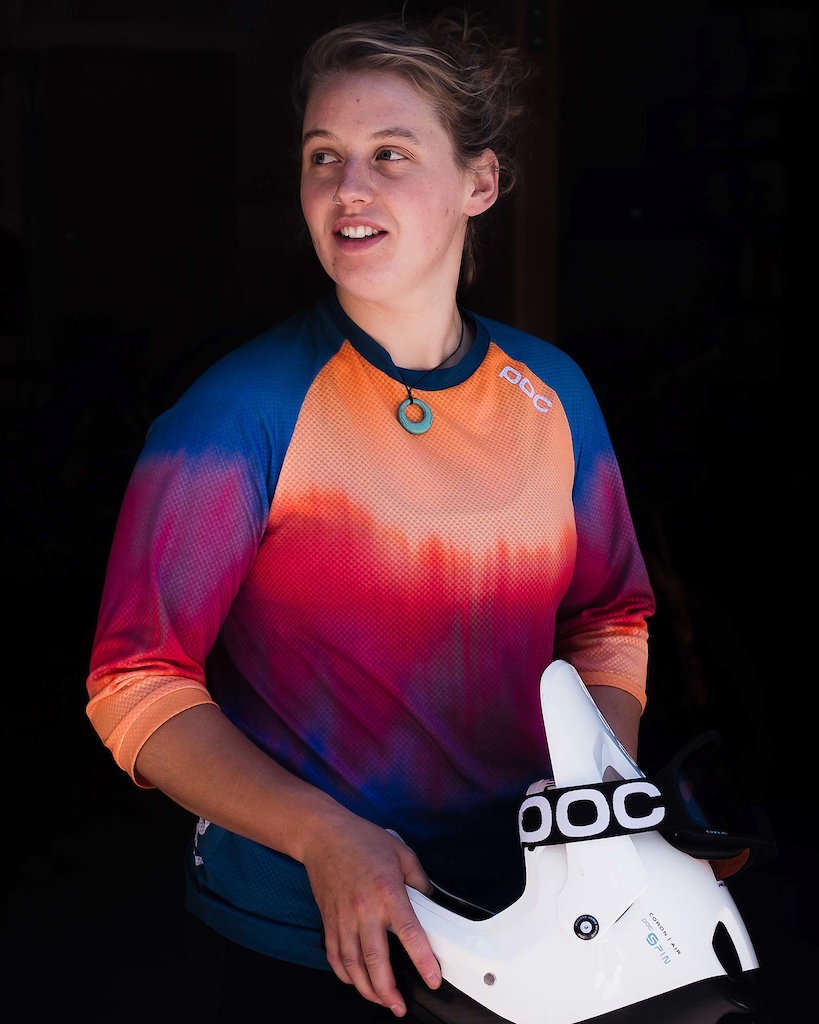 Portrait of an enduro racer
“We headed off on a family holiday to Fort William in Scotland, where we realized it was possible to take a lift up and ride a bike down the mountain. We had no idea it was the World Cup downhill course though! With enough padding to run into a wall, and the less than supple suspension on our used rental bikes, we managed to get down. It took us about an hour, but from that day on I was hooked on bikes and would regularly ‘borrow’ my brother’s bike to go racing and add to my consistent collection of weekly crashes.”

A world-class assortment of bruises characterized the early years of racing, but it also left a different mark; the idea to travel the world racing the EWS. As a privateer rider in charge of funding, travel, training, finding the bike, cooking the food, bike set up and then racing against professional riders with mechanics and team backing, the odds were naturally not stacked in her favor. Add on top of this a full-time civil engineering University course, and it’s easy to see that Bex was not blessed with spare time, but it all quickly paid off. 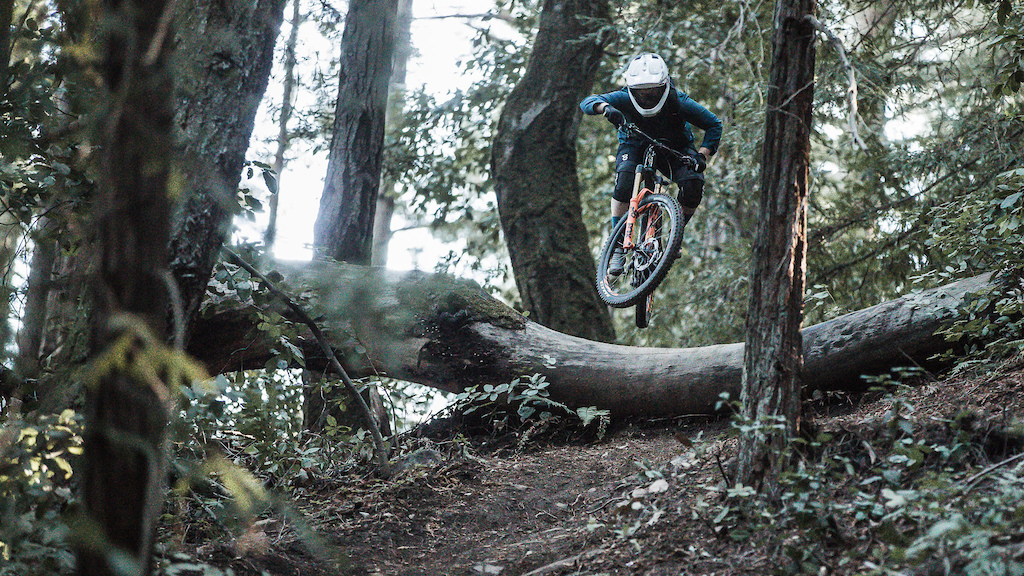 Making the most of nature's playground
“I was pleased with my racing in the first year of the EWS as I finished seventh overall and even though it didn’t lead to a pro contract, I decided to try another year. But that season highlighted that a privateer’s life would never let you compete on a truly level playing field. I decided that without a pro ride I would sit out the next season and consider my options; still to ride as much as possible and certainly to avoid a nine to five!”

A year of reflection, and any notion of a nine to five, never came to pass as very (very) late in the season – partly due to a wayward e-mail address – an offer to hook up with the small, but perfectly formed, Ibis Enduro racing team came in. Now in the second season with Ibis, the change of support and a leveling of the playing field has let Bex’s talent shine through, evident in a podium finish in the first EWS race of the season in Rotorua. 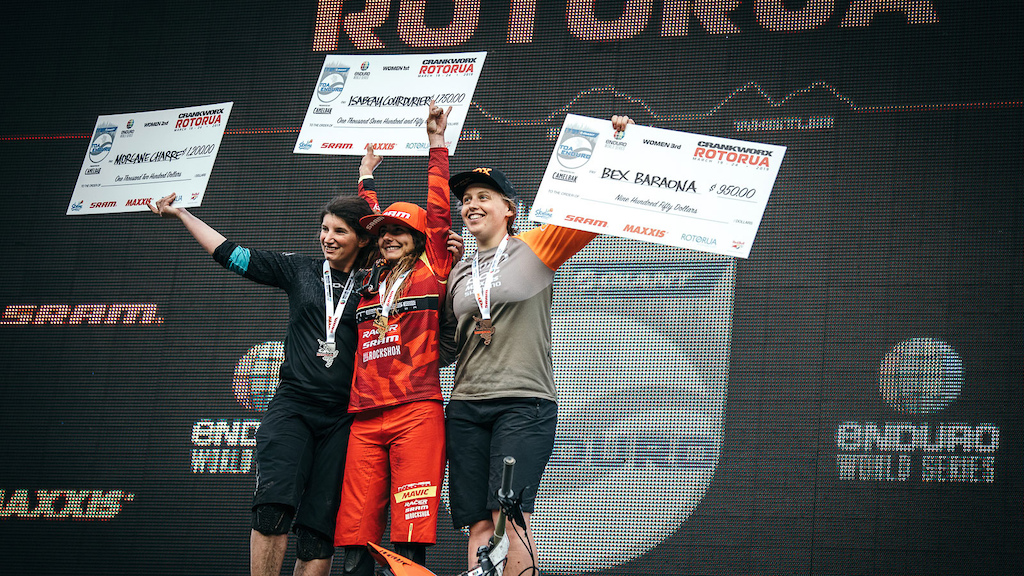 The Podium- round1 of the 2019 EWS
“As a privateer you are so used to doing absolutely everything yourself that the first year with Ibis was strange, especially being able to let go and allow others to take care of everything. It took me a while to adjust, but now I can feel all the benefits. In particular coaching in the off-season has helped massively, so I can get the fueling strategy right and ensure that my mind and body are all aligned. I used to ride aggressively, which was successful, but it also involved plenty of risk and falls. With the teams support, I have been able to adapt that aggressive riding, keeping all the good bits and adding flow, speed and consistency. And that feels good!” 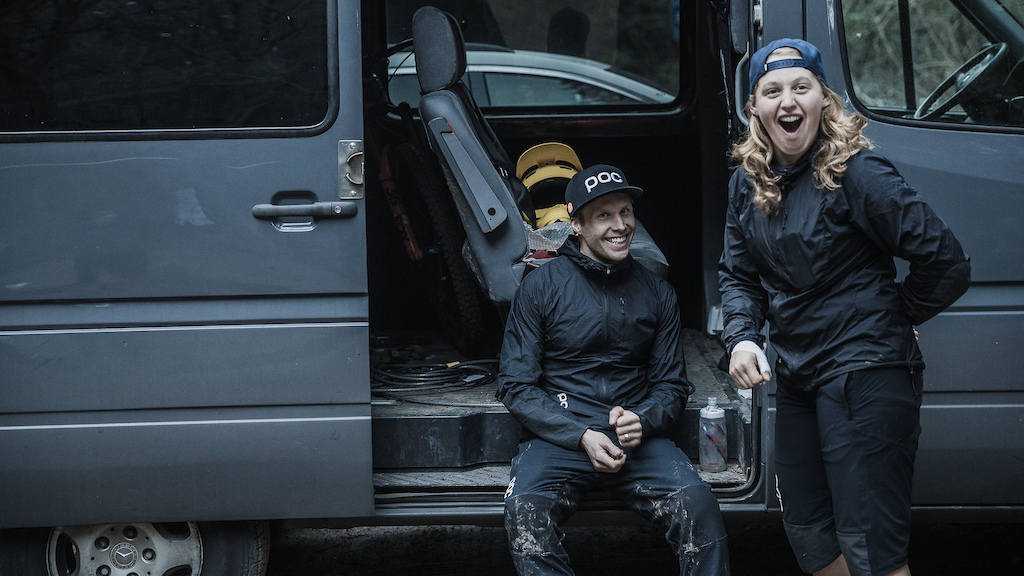 Robin Wallner leads the practice jokes
Not a fan of the limelight her racing results and way of helping others have nonetheless raised her profile on the global bike stage and the future seems bright. Her dedication, openness, energy, skills, camaraderie and overall positivity stands out as the very epitome of what’s good in mountain biking and it’s easy to join the shouts of encouragement as she flies down the trail! 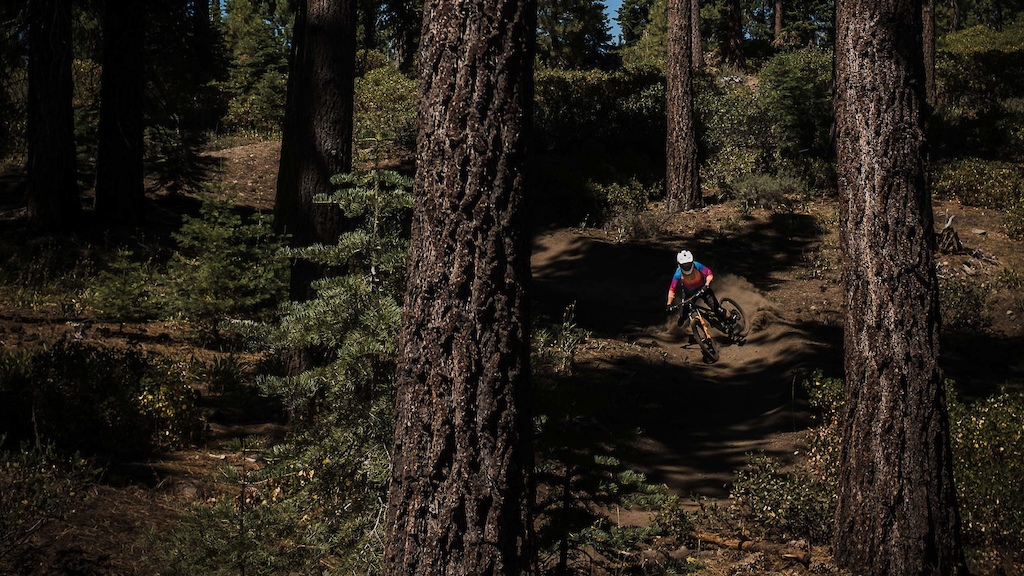 PROUD TO SUPPORT THE GOWAAN GALS
This sport we love is one that should be accessible for all. We’ve teamed up with Gowaan Gals Martha Gill and Bex Baraona to create this limited edition Gowaan MTB jersey. 10% of the proceeds from the sales will go to the Gowaan Gals to aid their work to get more women riding. 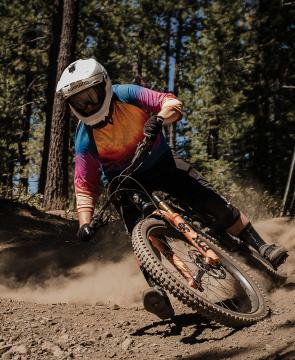 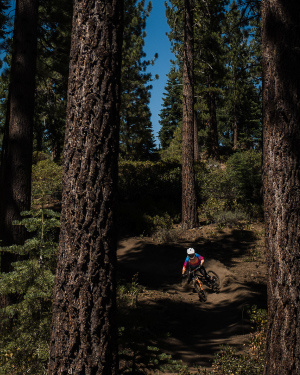 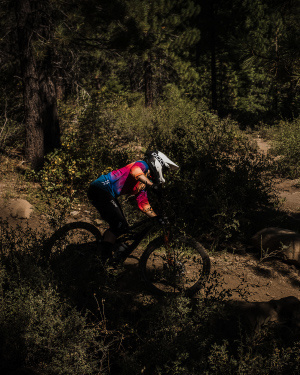