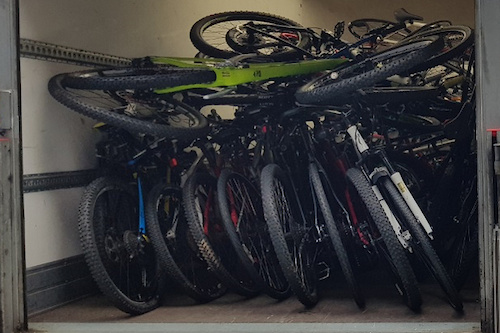 Police were investigating a single theft that happened outside a railway station in West Yorkshire and that led them to the property in Copster Hill where 101 stolen bikes were recovered. 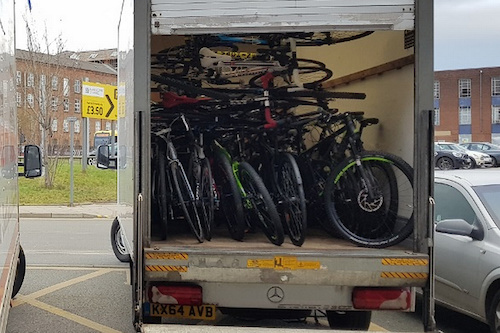 Police required six van loads to recover all the bikes that were stuffed in bedrooms and the garden at the property. They are currently working through the serial numbers of the bikes and hoping to reunite them with owners. Fingers crossed they are able to recover some of the lost Oranges, Rocky Mountains or other stolen bikes we've reported on in the past few months.

A 42-year-old man was arrested on suspicion of fraud by false representation and the handling of stolen goods. He has been released under investigation while inquiries continue.

HFturbo (Feb 21, 2019 at 11:29)
101 bikes recovered, however looks like none will be able to be identified due to lack of any visable paintwork left after police handling

metaam (Feb 21, 2019 at 11:44)
'We've recovered your bike, so any insurance money you received will have to be repaid.' 'The paintwork and stanchions didn't look like that when it got nicked.' 'Aah, that might be something to do with the way we transported it back to the station Sir, nevermind.'

vanillapodfan (Feb 21, 2019 at 7:45)
I've had a couple of bikes nicked over the years, one being a Chromag Stylus that went around a year and a half ago, is there any way of finding out what was recovered so I can see if mine is there?

Dropthedebt (Feb 21, 2019 at 8:36)
Contact Oldham police and give them a description of the bike you had stolen along with the serial number and any distinctive features. If you have any pictures, they may help the Police identify your bike. If you have done this at the time of theft, keep your fingers crossed that your bike could be in the haul. It's not a usual thing to let you view stolen property to see if yours may be there.

nojzilla (Feb 21, 2019 at 8:46)
Great news, I hope his sentence reflects the amount of worth there but, more than likely a slap on the wrist

nojzilla (Feb 21, 2019 at 21:31)
@llarrggee: true story.
I once saw a guy going into a back garden with a blantently stolen bike. Found the owner through FB an LBS told them where this guy lived.
Turns out
He was robbing the house I saw him goin in! Saw him a few weeks later an followed him, rang the Police an the bikes owner. Police catch him in the act of stealing parts off bikes in a lock up at a block of flats.
I identify him as the guy I saw going into the house that was robbed.
Police search his home an find items also stolen from the garage he stole the bike from...

ROOTminus1 (Feb 22, 2019 at 3:33)
Under our justice system the person of interest would likely be granted leniency for getting bikes off the road, or some other motorist-centric BS

robhowells87 (Feb 21, 2019 at 7:49)
As Above, @vanillapodfan .I had 2 bikes taken just after Christmas and id like to know if theirs anyway of viewing what has been seized.

haroman666 (Feb 21, 2019 at 8:25)
I would expect getting in contact with the police authority handling the case would be the best first step.

Oldham is also in Texas..