Portland: Where the Trail Ends

Join Pinkbike  Login
Portland is often labelled "America's Bike City." Unfortunately, to enjoy it one needs to trade in their mountain bike for skinny tires and drop bars. To the best of my knowledge there is not a single, legal dirt jump in all of Portland. There is about 5 miles of singletrack total, and none of it could be considered intermediate or advanced from a technical standpoint. There is one pumptrack. There is a 5,157 acre urban forest on the West side of Portland, and it contains 1/3 of a mile of legal singletrack. You read that right, 1/3 of one mile. It's no wonder many move here and ask, "Where the hell is the mountain biking?"

The Northwest Trail Alliance (local IMBA chapter) is doing everything it can to improve mountain biking for all levels and types of riders. Yesterday they kicked off an online petition to the City Council, asking them to finally take the first steps to possibly earning the title "America's Best Bike City." In a little over a day they have gathered almost 600 signatures, but they need more help. Please consider taking 30 seconds to add your name to the petition here 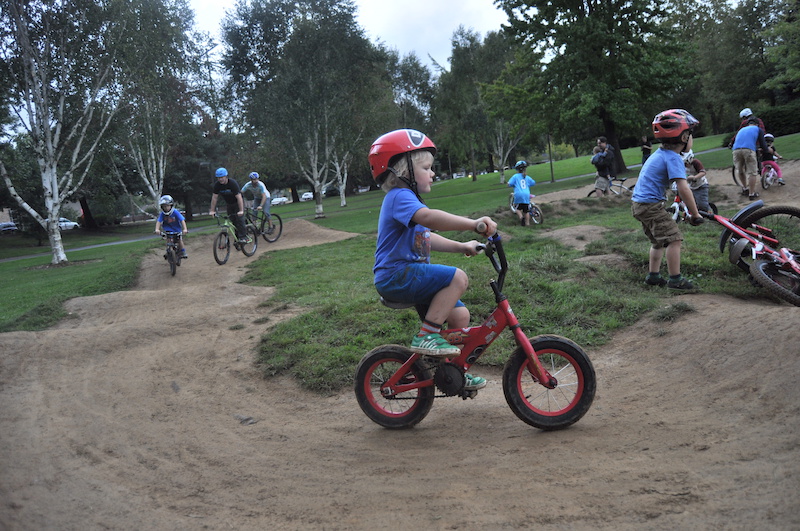 The Northwest Trail Alliance (NWTA) launched the petition to demonstrate support for a citywide recreational cycling Master Plan. This winter, Portland Commissioner Amanda Fritz halted all progress on development of a particular trail in Forest Park – a project that got started when Commissioner Nick Fish oversaw Portland Parks & Recreation. The news came unexpectedly, and at the dismay of supporters who thought they were seeing progress after over a decade of advocacy. “We are disappointed in the outcome of the Forest Park project, but we still want drive apositive conversation,” says Kelsey Cardwell, president of NWTA. “We’d like to send a message that there’s a demonstrated need, and that there’s a lot of us who are willing to speak up and contribute to the process.” Fritz believes we need a recreational cycling Master Plan and staff to drive the process. NWTA supports this, but wants to see increased urgency and on-the-ground action in the meantime in order to meet the needs of Portland cyclists. NWTA can offer a wealth of local and national resources and expertise that could be utilized to meet both short-term and long-term goals.

Off-road cycling has seen a spike in participation in the past decade, and Portland is out-of-step with surrounding communities and the increased demand. Sandy Ridge, a trail system an hour outside of Portland, will see between 80,000 and 90,000 visitors in 2014, up from 32,000 in 2012, according to the Bureau of Land Management (BLM). With the growth of recreational cycling, NWTA has seen increased support from all land managers within their region (e.g. Metro, Oregon Parks, BLM, Forest Service, Port of Cascade Locks, private landowners, various cities and counties) except for the City of Portland. “It makes sense economically speaking. It makes sense from a health perspective, and ultimately this process will reduce user conflict and illegal riding. We are excited about the idea of working with diverse user groups to reach a plan we can all get on board with.” Northwest Trail Alliance calls on all outdoor recreationalists to support this petition and spread the word. The end goal is to get more people outside, enjoying and exercising in the vibrant natural spaces that Portland has to offer.

thrasher2 (Nov 27, 2014 at 1:07)
Portland has a lot of nicknames: The City of Roses, Rip City, Stumptown, Bridge City, P-Town, PDX, Beervana, etc. But "America's Bike City" is not fitting. Trail use groups have a firm anti-MTB stance because of the perceived negative impact that bikes have on the forest (and selfishness). However 90,000 people driving gas guzzlers out to Sandy Ridge is perfectly acceptable. By the way, 90,000 riders this year, and those woods are still healthy.

Good work NWTA. Sandy Ridge is a blast and should be used as a model of Mountain Biker and Government cooperation everywhere.

duffong (Nov 28, 2014 at 11:00)
Compared to how many moto trails are out there, mtb looks like a radical fringe group - we look like a bunch of Guy Fawkes mask wearing anarchists armed with molotov cocktails.

foreverforum260 (Nov 27, 2014 at 2:43)
Very well written! The truth about "America's Bike Capital." Maybe should be "America's fixie (or road) bike capital." Part of the thing that annoys me is that Forest Park is the largest park located with in city boundaries in the United States (maybe World?? Not sure) and there are some fire lanes and a little single track, but nothing else to ride. The close goods are actually here in Vancouver, WA. There are too many environmentalists in Portland that see all the down falls, overplay them and fail to see very many of the positives that can come from this.

Please take a few moments to e-sign this petition!

gratefuldmb (Nov 26, 2014 at 19:13)
All over our state are great riding areas the have brought numerous positives. The population center of Oregon needs this, we need this. Long live One Ghost!

seanyboy760 (Nov 27, 2014 at 14:10)
Everyone please sign it! It would greatly help, there is so much untapped potential for building and riding here in Portland! We just need the city to get on board and this petition is a great stride.