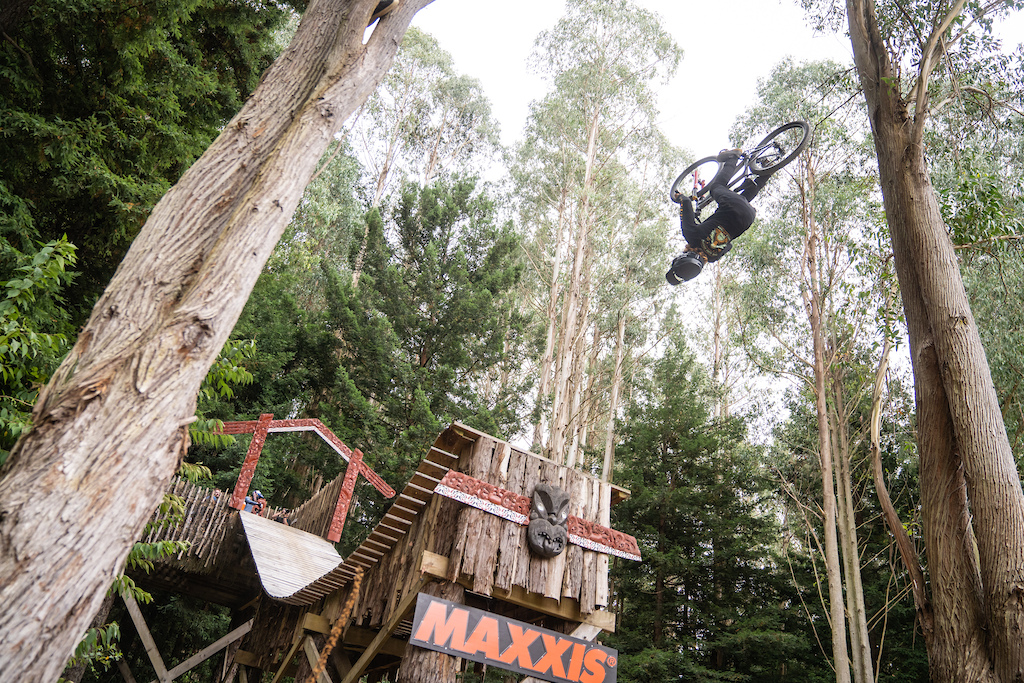 Paul Couderc in practice in Rotorua, 2020. Photo: Kike Abelleira
November 1-7, the final stop of the Crankworx World Tour will launch from Rotorua.

Here’s who and what’s coming, and the stories that are starting to take shape.

Maxxis Slopestyle in Memory of McGazza
2021’s Slopestyle contest in Rotorua will bring together a mix of those who’re new to the game, those who know the game and are pushing for the top, and the one who’s changing the game.

Recent newcomer to Crankworx competition Griffin Paulson will be getting his first crack at the Rotorua course, while Paul Couderc is hoping to get his first taste of finals in Rotorua. He was on the start list for the event in 2020 but was injured in practice.

Two riders in the field have competed in this event every year since in began in 2015: Tomas Lemoine and Nicholi Rogatkin.

Lemoine earned his top Crankworx Slopestyle result at this level of competition to date on this course in 2019, coming in 2nd.

Rogatkin brings with him the strongest track record: of his six results in Rotorua, three have been 2nd place finishes, and one a 1st.

And while Emil Johansson has only competed on the course twice (2017 and 2020) he’s podiumed both times (3rd and 1st). And his current track record speaks for itself: a win in Rotorua would make it his sixth Crankworx Slopestyle win in a row, earn him the overall 2021 Slopestyle World Championship title, as well as the Triple Crown of Slopestyle. 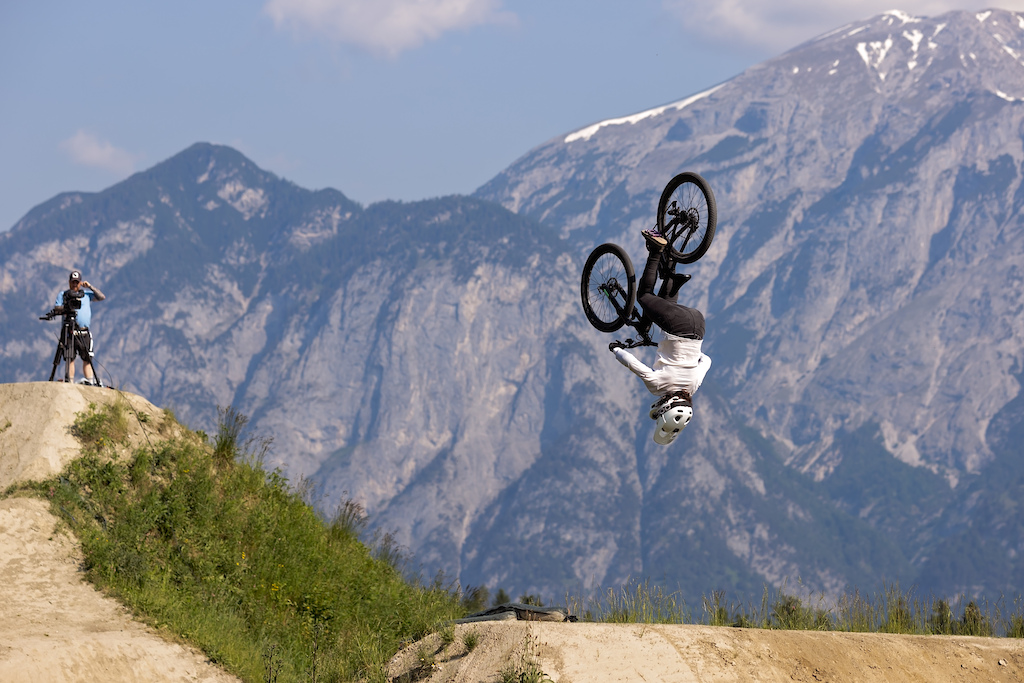 Robin Goomes in Innsbruck in June. Photo: Clint Trahan
CLIF Speed & Style presented by Mons Royale
The game has changed for Speed & Style at Crankworx in 2021. Why? The women have changed the game.

This year, progression has been on for the women of freeride. So much so that when they threw down at Speed & Style at Crankworx Innsbruck earlier this year, they blew the trick list out of the water.


Watch for Robin Goomes, who recorded the first backflip in Crankworx competition in Innsbruck and who’ll be competing on home turf, and Caroline Buchanan, who pulled off the first front flip at Audi Nines earlier this year.

On the men’s side, Tomas Lemoine and his fellow Slope rider Tim Bringer will sure be ones to watch. They’ve both got a deep bag of tricks and have proven they’ve got the speed to push for the top. The event in Rotorua is also one that’s provided a platform that’s launched local stars. 2018 saw Joe Simpson take 2nd in the event, while 2019 saw Billy Meaclam rise to the top at take the W. 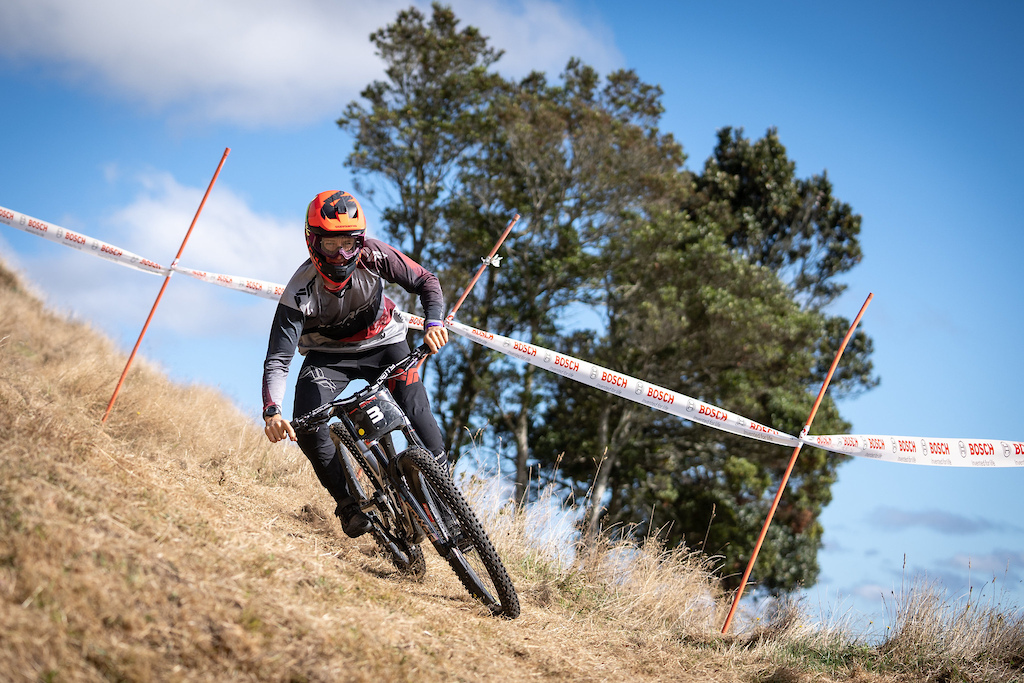 Sam Blenkinsop at the top of the Mount Ngongotaha track in 2020. Photo: Kike Abelleira
Crankworx Rotorua Downhill presented by Gull
Consistency and the Kiwi advantage are likely to be the deciding factors in this year’s downhill race in Rotorua, if results from the past six years are any indication.

Three of New Zealand’s top elite male downhill racers have competed the most consistently on the Mount Ngongotaha track at Crankworx. Sam Blenkinsop, George Brannigan and Brook Macdonald are all on the start list in 2021. Each has placed consistently in the top five, with Blenki taking the win in 2018 and The Bulldog in 2019. Brannigan has a 2nd place finish (2016) and two 3rds (2019 and 2020).

On the women’s side, Casey Brown has been the Queen of consistency. She’s competed in the event every year but one, placing in the top 10 every time, including two 3rd place finishes (2016 and 2017).

What awaits them? A few small changes have been made to the track that hosted World Champs in 2006 (won by Sam Hill), sure to keep riders on their toes as they battle their way down. 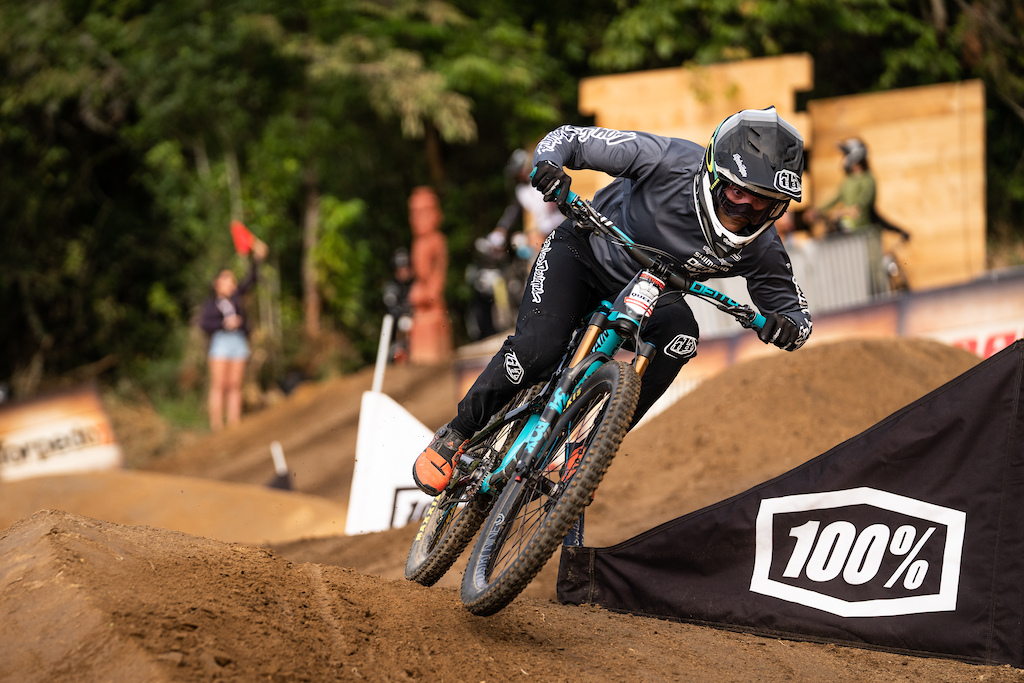 Vaea Verbeeck, charging for Queen points in Dual Slalom. Photo: Kike Abelleira
Specialized Dual Slalom Rotorua
Speed and skill will be on come Dual Slalom day in Rotorua, in this discipline that brings together the best of the best from across disciplines. Dual Slalom challenges racers to go back to basics, put the pedal to the medal, and do it all flawlessly, and the track in Rotorua is no exception.

It features five berms and rollers, two tabletops and one spine over 450 meter.


All eyes will be on Bas van Steenbergen and Vaea Verbeeck. Both are renowned for their Slalom prowess, are coming in hot after Crankworx B.C., each with a win in the first Dual Slalom of Crankworx B.C., and each in the lead for King and Queen of Crankworx, respectively. Van Steenbergen came in second in the Rotorua race in 2020, while Verbeeck came in third.

Others to watch for will be Matt Walker, who came in third in 2020 in front of the hometown Kiwi crown, and Kialani Hines, who’s coming off a Slalom win at the Sea Otter Classic in California. 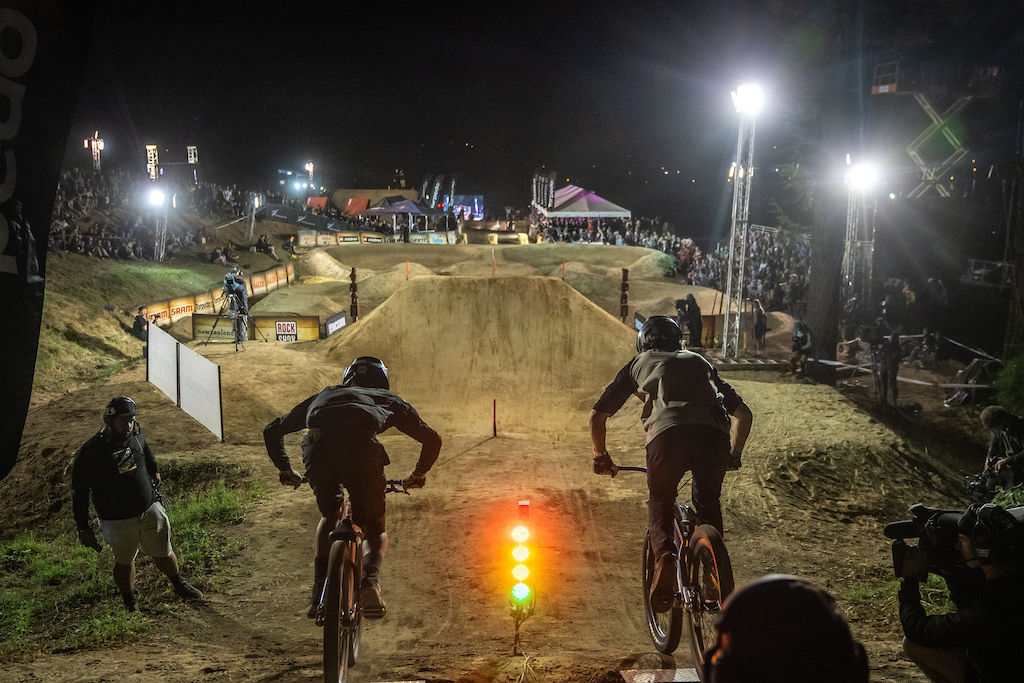 The Rotorua Pump Track, under the lights in 2020. Photo: Kike Abelleira
RockShox Rotorua Pump Track Challenge presented by Torpedo7
Rotorua’s thriving BMX scene has brought disruption and excitement to the Pump Track time and time again. The venue has seen young local stars like Connor Mahuika and Keegan Wright rise to meet the challenge of the world’s best riders.

This year, a stacked field is set to light up the night in Rotorua including Caroline Buchanan, Harriet Burbidge-Smith, Kialani Hines, Tomas Lemoine, Billy Meaclam, and Tuhoto Ariki-Pene. 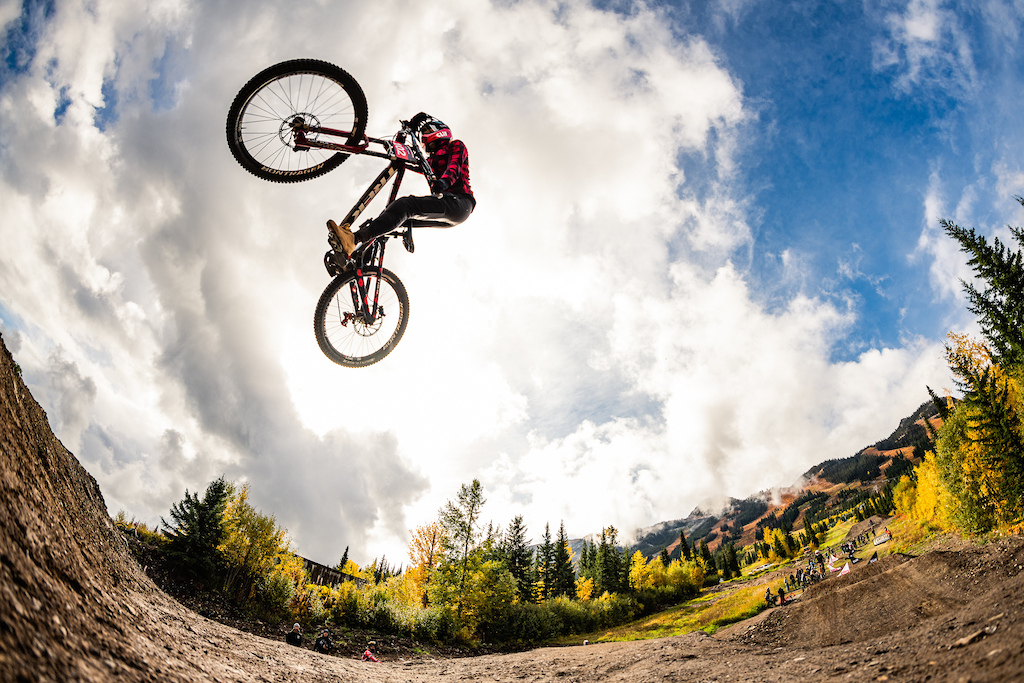 The Whip-Offs objectives are simple: get sideways, have fun. It’s freeride at its loosest, and the deep rider list speaks to how much riders love this event.

The stage is set. The players are locked in. T-minus three sleeps ‘til go time on the final stop of the 2021 Crankworx World Tour.

Live coverage of Crankworx Rotorua will be on Red Bull TV and right here on Pinkbike.

CamLamson (Oct 28, 2021 at 13:01)
Honestly all I want is to see Rheeder competing in slopestyle again. Either way it’ll be interesting to see if Emil can throw down for the 6th time or If Rogatkim can put together a banger run and wow everyone. Stoked to see Griffen Paulson competing again his second run in BC was insane. Can’t wait to see what goes down

themadcarver (Oct 29, 2021 at 6:45)
I find it strange that Anthony Messere gets such little coverage on pink bike.

leon-forfar (Oct 29, 2021 at 12:29)
He's got to make content for PB to be able to cover him. He did put out a rad edit a couple of months back that PB featured on the front page: www.pinkbike.com/news/video-anthony-messere-rediscovers-his-mojo-in-resurgence.html

To get back, you need to go into an online waiting lounge, get assigned a random number, then if you are lucky and your number is lower than the number of MIQ spots (usually between 2,000-3,000 ea time), you get a place if you can line it up with an airline seat.

While 70 foreign bike riders is the proverbial drop in the bucket, this is F**cked up

jugoslav (Oct 28, 2021 at 22:30)
@AlanT-NZ: I've been finding this fascinating as a observer, particularly wondering how Crankworx got in and SailGP's Christchurch event for example did not. SailGP is a one entity series backed by Larry Ellison and run by kiwi Russel Coutts and was born out of the ashes of the US loss of America's cup in 2017 so it's a reasonably big deal, arguably bigger on paper than the Rotorua event. The AC and surrounding nonsense is evidently politically complicated in NZ but it was wild that Crankworx got in and SailGP didn't. I was wondering if Crankworx had regional government friends in high places.

dirtbeard (Oct 29, 2021 at 2:13)
@jugoslav: crankworx would employee a tone of indigenous people in the hub of iconic Maori culture hotpools showcasing Maori culture to the world. Sail gp would be a bunch of Uber rich white guys taking up miq spots to race boats no one can afford and drink champagne and pose with 10k handbags which while that might be quiet lucrative maybe not the best look in a pandemic

kidsrideshotgun (Oct 29, 2021 at 18:46)
Such a great bunch of local riders. Can't wait to watch Ellie Chew in particular in the speed and style, will be interesting to see if her BMX skills cross over onto the MTB.
Below threshold threads are hidden

chriskneeland (Nov 4, 2021 at 4:06)
@leolentz: Then you should probably watch BMX where people have been doing his tricks with better style for years. MTB is about bigger gnarlier tricks that can't be done on the small bikes. Rogatkin is the only one who understands the assignment.
Post a Comment