Privateer Adds the E-161 to Their Lineup 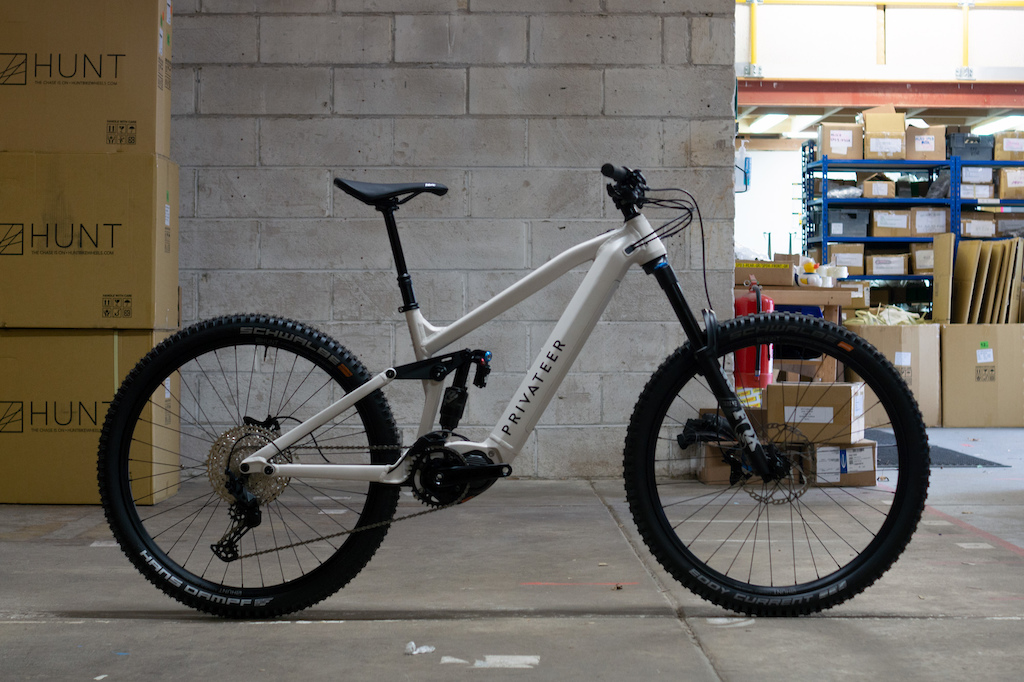 Building on their 161, Privateer are adding the E-161 to their upcoming bike list.

The request apparently came from a conversation with Privateer's racer Matt Stuttard, before even the regular 161 was finished. He wanted a training tool that almost mimicked the 161 but with the ability to get back to the top quicker to be able to cram more runs into the short winter training days.

The E-161 takes a lot from the regular 161, like its suspension layout, silhouette and pretty aggressive geometry and then adds the new Shimano EP8 drive system with a 630Wh battery for that extra assistance. 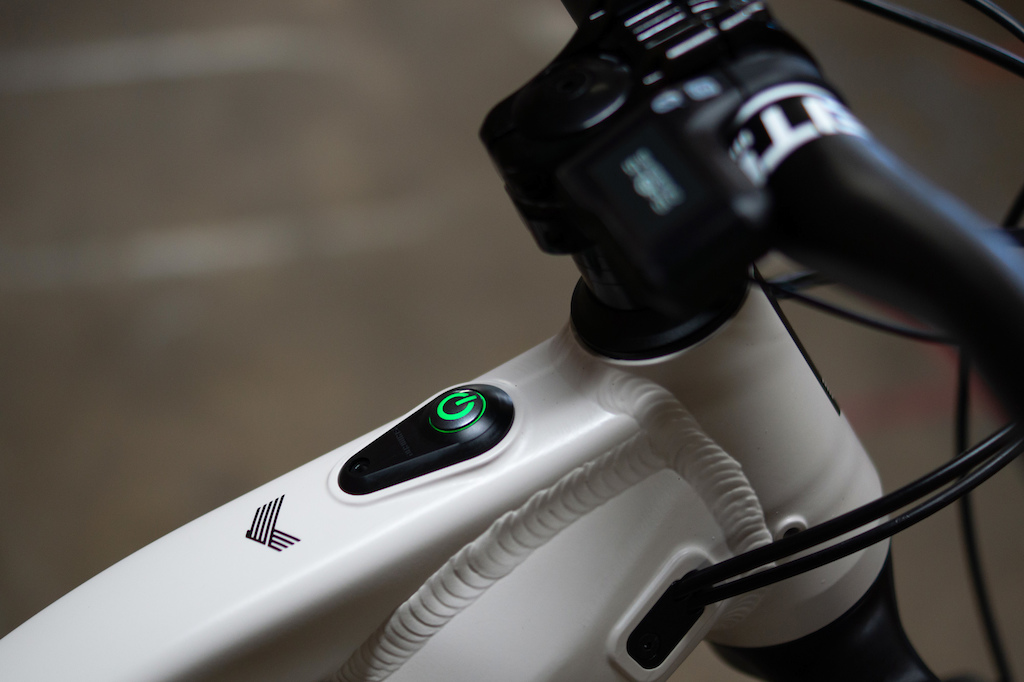 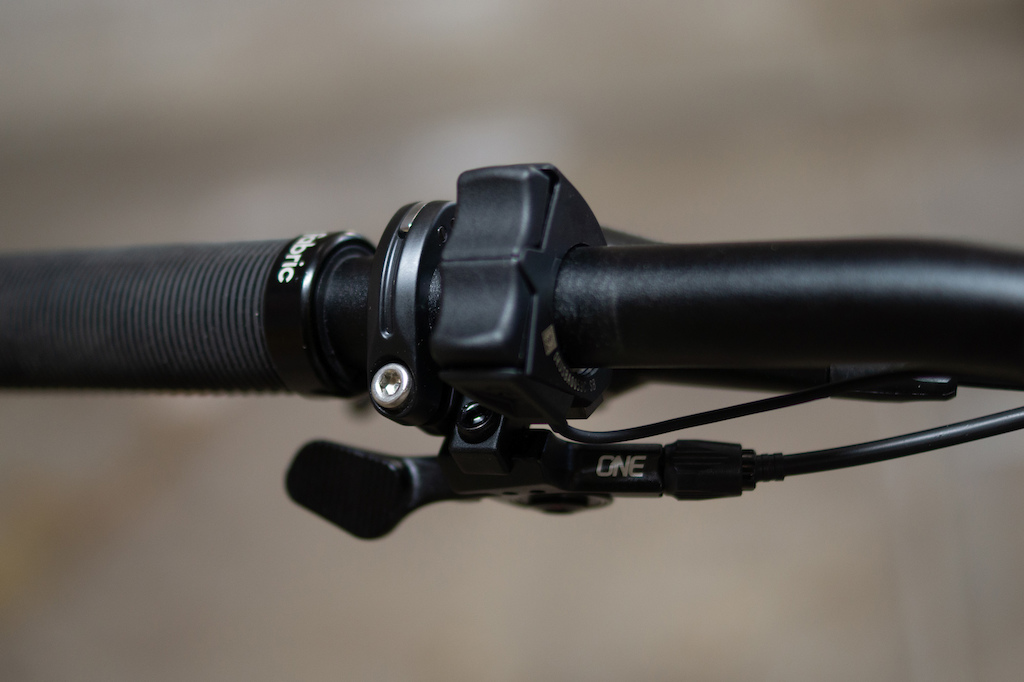 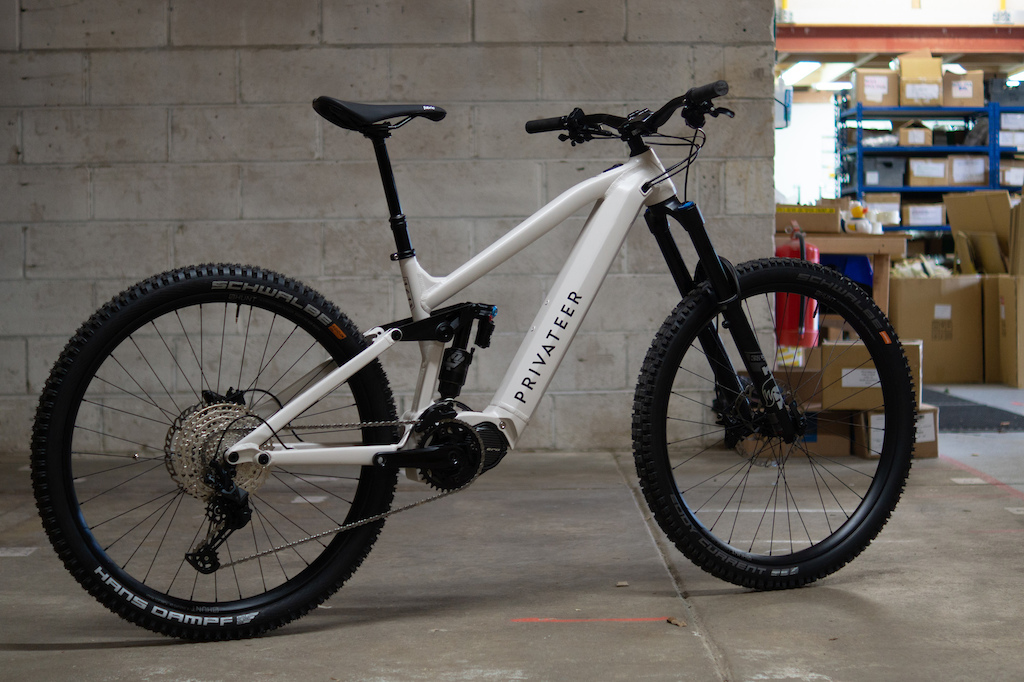 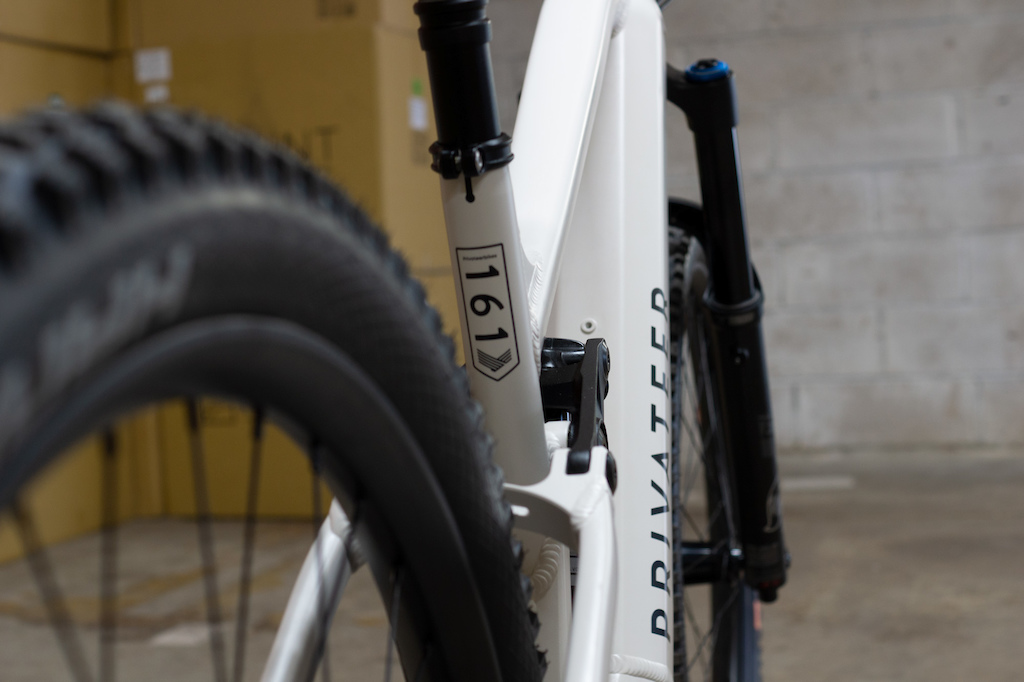 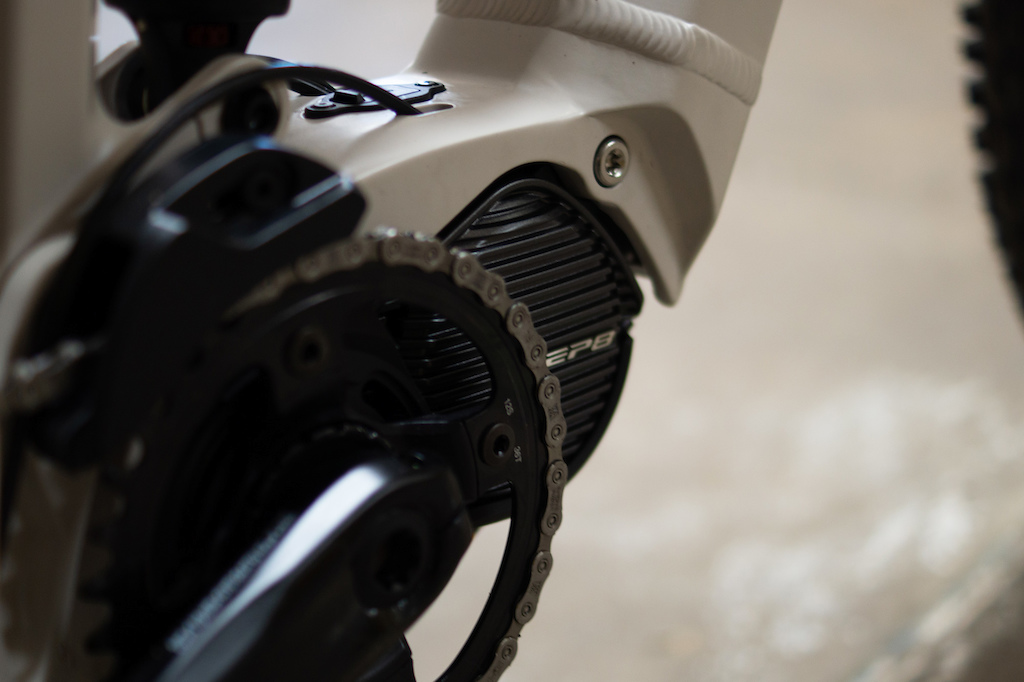 The E-161 takes a lot of inspiration from the regular 161, following the same layout and aggressive intentions, just with some added help for the way back up to do another lap.
At this stage it's a bit further back in the development timeline compared to their other bikes, with the bike only recently being taken for its first spin. But the details we have already say that it's got a 64° head angle, a reach range of 445 to 515mm and has an effective seat tube angle of 78.7°, that being a little slacker than the 161, which Mike Kazimer commented to perhaps be on the limit of too steep.

The E-161 is going to be ridden more over the coming season, by both the guys at Privateer and under their athletes such as Matt Stuttard, Chloe Taylor and Matt Simminds, before it'll be ready for sale. They're aiming at complete bikes only around the £5,000 mark, or roughly €5,590 or $6,660 with the current exchange rates.

More information about the technical details, spec, pricing and availability will surface in the coming months. When it does, we'll be sure to keep you updated.

anchoricex (Aug 31, 2020 at 11:43)
When I visited coast gravity park I was kind of amazed at how much they beat the shit out of their shuttle truck. That thing was on life support going up those steep fire roads with the trailer loaded with people/bikes. I know the truck is an inanimate object but dear lord I felt bad for it.

nordland071285 (Aug 31, 2020 at 13:58)
what if a shuttle truck was more eco friendly? im sure it would be feasible to produce a shuttle truck thats better for the environment than all the ebikes it would have taken up the mountain

nordland071285 (Aug 31, 2020 at 15:00)
Why the downvotes with no reply? Are you thinking a shuttle will never be as eco friendly as individual ebikes?
In the same way as a bus carrying 20 people is more eco friendly than 20 cars on the road.

I admit current shuttle vehicle options need work to catch up, but I see it as possible

anchoricex (Aug 31, 2020 at 15:01)
@nordland071285: I honestly feel like the cybertruck would make a killer shuttle vehicle, and the numbers being advertised seem pretty promising. Guess we'll see how that thing holds up when it's in the hands of consumers.

But I'm sure they will become much much less costly when they become more common.. The cyber truck has all the expensive features like 'unbreakable' glass (lol).. Whereas an eco friendly vehicle for shuttling bikes could have the simplicity of a transit van providing it has an engine clean enough to rival the culminated effects of the ebikes its shuttling.
I dont ride shuttle enough to consider ebike as a cleaner option to my cycling habits..but for the guys regularly taking shuttles on their acoustic bikes, the choice to switch to ebike is probably logical and cleaner.. Unless those shuttles are still running, but with fewer bikes!

anchoricex (Aug 31, 2020 at 17:17)
@nordland071285: Yeah we're just now on the cusp of venturing into EV's that tow heavy loads so it's going to take some time, but the paradigm shift should hopefully result in more alternatives in the space and I think over the next decade we'll see the price of EV's start to come down drastically.

nordland071285 (Aug 31, 2020 at 18:26)
@streetkvnt-kvlt: haha yeah my friend converted his car to bio something..stank of chips and door handles were disarmingly greasy
He also went well out of his way to get the stuff, but hey..Good intentions, and presumably he continued using it because it worked out cheaper or cleaner than the alternatives.
Electric wasn't really a affordable option when he did the conversion

bg-EVIL (Aug 31, 2020 at 23:39)
@nordland071285: but what to do if there are no "real" roads up to the top where you can use the shuttle truck? in my area we mostly have small and private fireroads f.e. - not everybody is living next to a bikepark, a good infrastructure is key for a shuttle. and yes you calculation with 20 cars etc. is correct, but not to forget that the bus also needs a good workload, otherwise it is not profitable (economically and ecologically).

mountainsofsussex (Sep 1, 2020 at 2:11)
@nordland071285: as with all these things, "it depends"... If nobody bought ebikes (with the associated emissions during manufacture) and the e-shuttle replaced them, then the shuttle would be cleaner than everyone using ebikes just there. However the ebikes get used elsewhere, and the e-shuttle has to carry its own weight up the hill, so it probably doesn't win against ebikes. But if it's used all day, it almost certainly wins against diesel shuttles. The key with anything battery powered is that it's got to be used to pay off its emissions during manufacture - you're better off with a two-stroke of its sat in the shed 360 days per year!

mountainsofsussex (Sep 1, 2020 at 6:14)
@rojo-1: have you ever looked at the power rating on the side of a chair lift station? Makes me feel very guilty about my holiday when it says 750kW! Admittedly, shuttle trucks to carry that many skiers to the top of the mountain would be waaaaay worse!

Rageingdh (Sep 1, 2020 at 8:24)
@anchoricex: Just think how good all those batteries are going to be for the environment as well.

You've quoted the most powerful chairlift available, which still only consumes the power of two Tesla P90D. I'd say that's pretty damn efficient considering it would be delivering at least 480 bikers per hour. That would be at least 30 large shuttle bus runs per hour, i.e. one bus every two minutes!

Chuckolicious (Sep 1, 2020 at 11:24)
@nordland071285: In 2005 I bought a brand new VW Golf TDI GLS. Took it straight to a conversion shop to install a Grease Car kit. Second tank, heated, running filtered used vegetable oil (chip oil to you lot). VW people hated me, said I was going to blow up and ruin such a nice new car. Collected oil from restaurants in my area who had to otherwise pay to have it hauled off. Settled and filtered it diligently in my garage multiple tank meth lab. Put over 350K miles on it, still mint condition, no stinky greasy shit, then sold it to my friend, who now has over 600k on it. He wasn't as anal retentive as I, so it looks like a used car rather than a garage baby, but still runs like a top. Was a really fun time, and happy to never do it again. I'm one of the first in line for the Cybertruck, and I almost ordered a custom Raptor. Back to your original thought, sure, Econoline style electric vans will come. Probably not for another 5 years at best, but they will.

Chuckolicious (Sep 1, 2020 at 11:26)
@mountainsofsussex: My local park, Thunder Mountain, is 100% powered by the giant industrial wind turbine they installed some years back, along with a substantial solar panel field. Pretty rad.

Chuckolicious (Sep 1, 2020 at 11:27)
@Rageingdh: Virtually 100% recyclable, and that's after second life being repurposed for uses like stationary storage. The cells used in these things are highly valued, and nobody is just tossing them.

mountainsofsussex (Sep 1, 2020 at 11:30)
@rojo-1: I'm just remembering what I saw written on the side of one I saw in France this year. And yeah, it's a lot better than a whole bunch of shuttle trucks. Though I wonder what the lifts use when they're not full - in PDS, many of the lifts are pretty empty, so might not be so different to a full shuttle truck...

boozed (Sep 1, 2020 at 16:15)
@streetkvnt-kvlt: If it smelled like that it might have been running recycled cooking oil rather than actual biodiesel.

Chuckolicious (Sep 1, 2020 at 16:23)
@boozed: Home made BD smells almost as much as the straight waste vegetable oil I used to burn. Commercial stuff has a general corn like scent.

boozed (Sep 2, 2020 at 1:09)
@Chuckolicious: Fair enough. A mate of mine used to make the stuff, maybe he was just meticulous about cleaning it.

ibishreddin (Aug 31, 2020 at 16:25) (Below Threshold)
Orange should make an ebike then if we want one that actually looks good

onlyDH (Aug 31, 2020 at 9:54)
Very cool. Now I just need to finalize my divorce so I can get into some big mountains to use something like this

withdignityifnotalacrity (Aug 31, 2020 at 9:39)
If all you're gonna do is winch and plummet, might as well get some help winching

Was expecting their next bike revealed to be a 141mm travel “normal” bike.

PrivateerBikes (Sep 1, 2020 at 1:15)
@Endurip Thanks! That really means a lot to us, just trying to make products that get us, and hopefully other riders, excited

ehansen007 (Sep 1, 2020 at 13:43)
Since we're talking about the shuttle or even maybe the lifts, MTB has become so popular with Covid, the lift lines have been ridiculously long. Like 20-40min long. I thought I'd try an experiment and avoid the lift pass. As a result, I was able to beat my friends back to the top on my Fantic 180 at Snow Summit and sit around 10 minutes waiting. I even had to go around the outside of the park on the jeep trails! I got 3 downs in and could have gotten 4. They only got 5 runs in all day and I felt like I still got a better, all around workout. The experiment was a success. I was tired as F too as the downhills were a great workout with a 50lb bike!

- Weight (loving my 161! but the frame weight is kinda ridiculous)
- BottleCage Mount position (at least on the P2 size its really hard to squeeze the bottle between damper and frame)
- Rear bolts. The creaking noise that Mike Kazimer described was present on mine too, quite early. At least initially mounting it with loctite and a bit more grease would be an upgrade
- dropout hangers upgrade: I'm on the second one and on both the deraillieur screw comes loose quite frequently in rougher terrain - fixed it with loctite, but there seem to be a little too much tolerances?
- a little more smallbump sensitivity in the rear

Varaxis (Aug 31, 2020 at 11:48)
I'm curious about how much the ebike parts add to the price. $1500? 2000? Kind of want to compare it to how much a carbon frame adds to the price over an alloy version of the same bike, and what exactly a buyer intends to get from the carbon upgrade.

aljoburr (Sep 1, 2020 at 8:00)
Looks like manufacturers will stop making MTB's & just make e-bike that can remove motor & battery to make it a regular bike?
[Reply]
Any one want to but a conversion kit?

PrivateerBikes (Sep 1, 2020 at 1:16)
@zyoungson Thanks for the feedback, we've been testing different shock options so hopefully have alternatives to offer riders soon.

Your bikes look fantastic! All the best