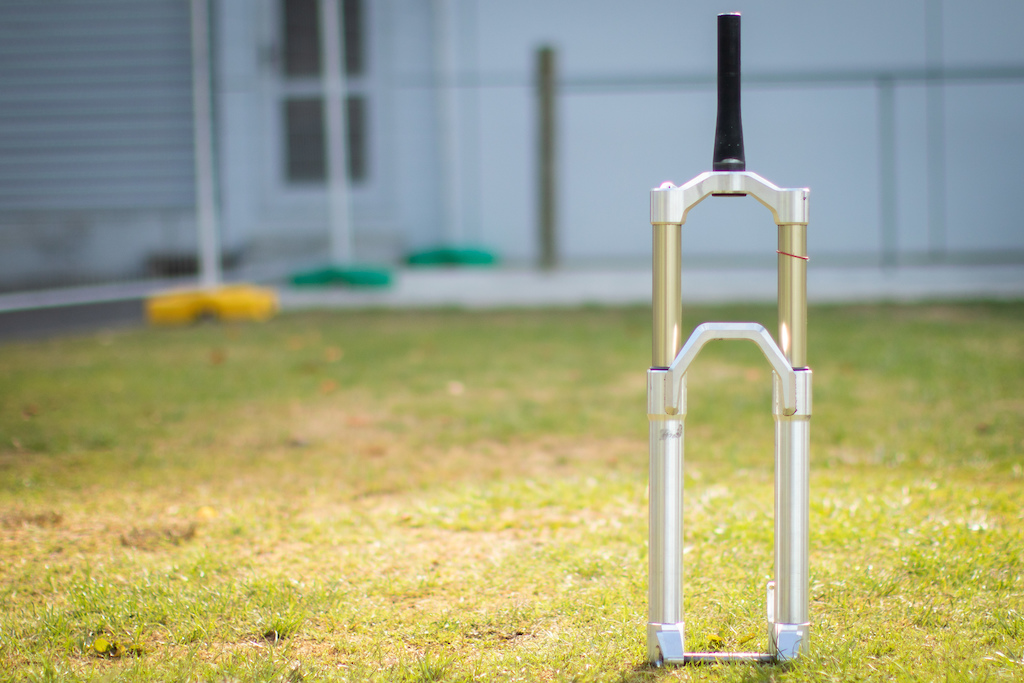 If you're looking for a fork that can double as a mirror, here it is. This very shiny and unlabelled prototype was spotted in the Crankworx Rotorua pits, with the only markings on it being "Prototype #3" written on the back of its machined crown. Judging by the beefy chassis and what appears to be at least 160mm of travel (or more), it's clearly intended for all-mountain and enduro use. Any guesses as to whose fork it could be?

The thread-on caps at the crown, as well as the adjuster at the bottom of the right leg, give it away as being from Intend Bicycle Components. The small, high-end German brand has previously only manufactured inverted suspension, like their Infinity DH fork. Stay tuned for more details as we get them. 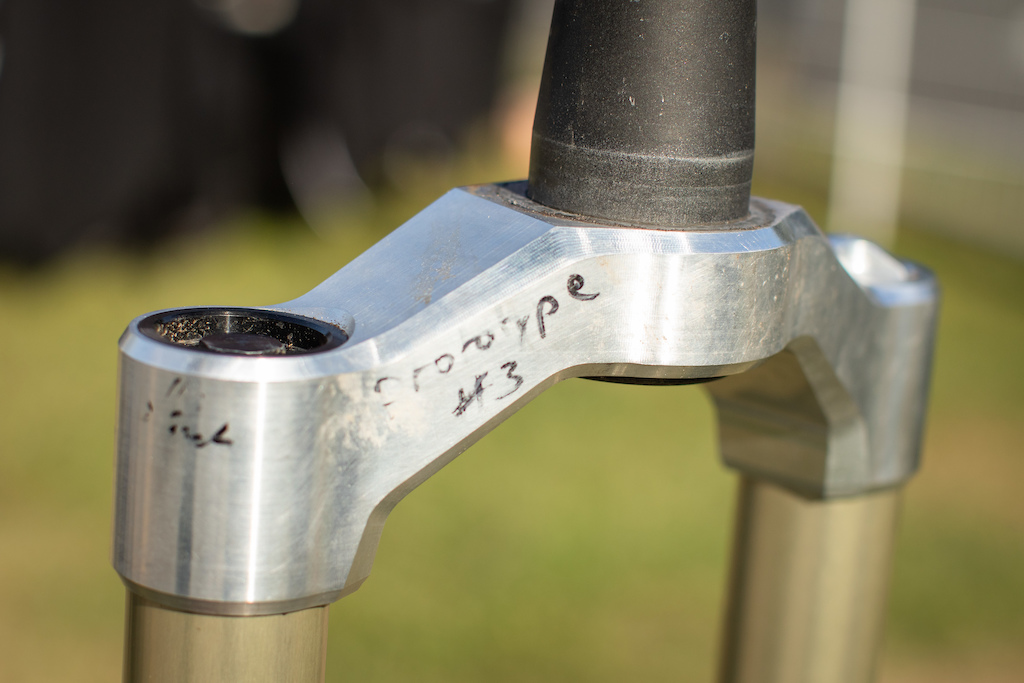 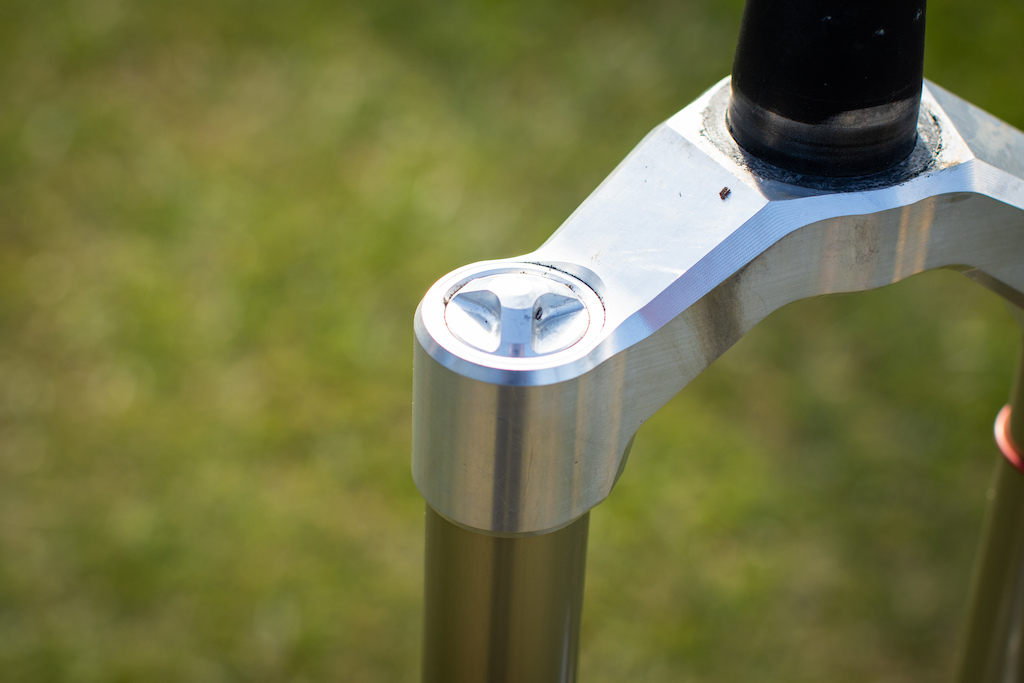 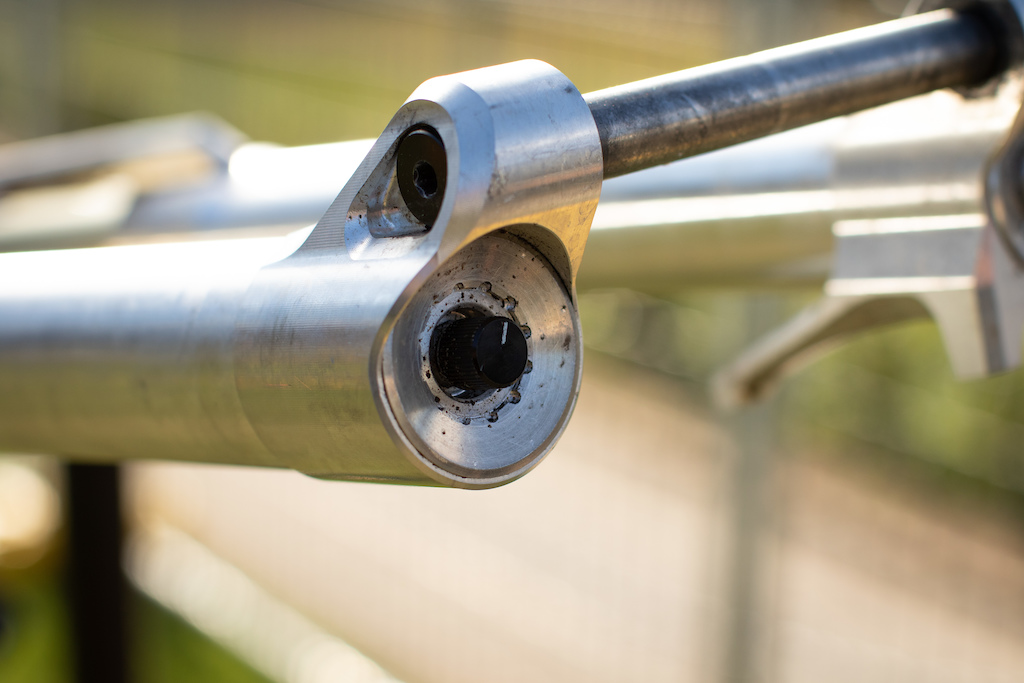 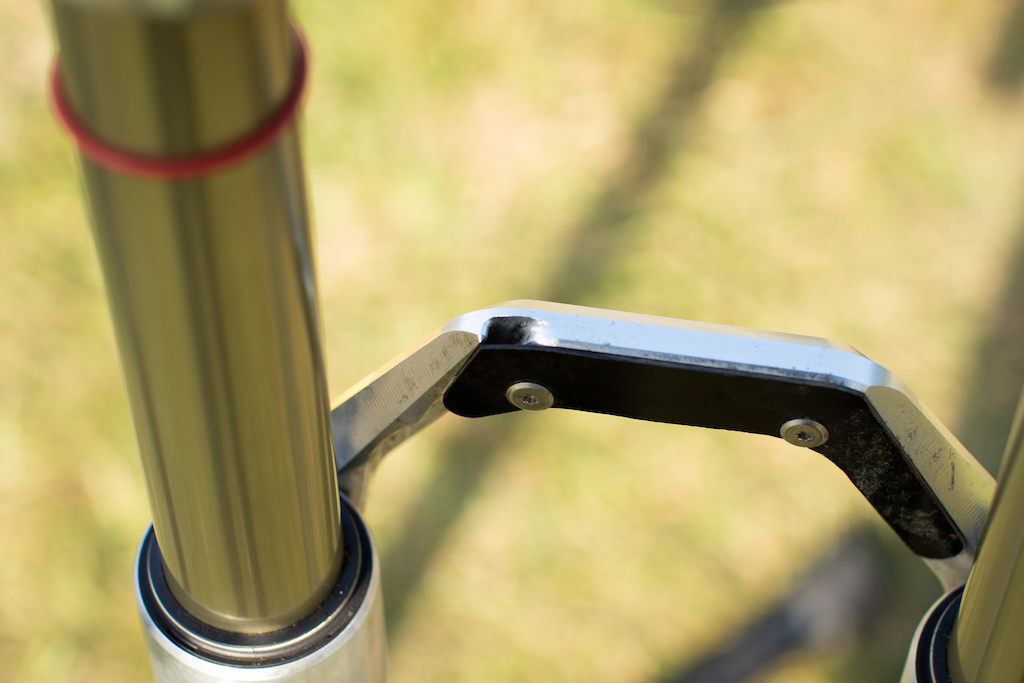 Posted In:
Reviews and Tech Forks


I'll wait for the EXT fork and if also too much, I'll wait for the new Rock Shox and Fox to see if there's a good coil fork otherwise I'll just add a pound on my lyrik with the Smashpot coil kit!

ibishreddin (Mar 7, 2020 at 15:03)
On a raw ripmo af with ti coil shock and some ee wings and a brown chrimag saddle. If you're going full Pagani huarya with it, use a Nicolai frame

banffowen (Mar 8, 2020 at 22:32)
@streetkvnt-kvlt: Using the name Totem these days could be construed as 'cultural appropriation' these days.
PC = politically correct.

streetkvnt-kvlt (Mar 9, 2020 at 1:46)
@seismicninja: I already knew what it was. Was asking about possible name related matters etc.

streetkvnt-kvlt (Mar 9, 2020 at 1:51)
@banffowen: by who exactly? And I thought PC meant 'Personal Computer' not politically correct.

And extreme shox is a Italian brand. It’s location is right next to Milan. I think they’ll delay to launch til late May - early summer.

streetkvnt-kvlt (Mar 9, 2020 at 16:04)
@banffowen: you want me to look at pictures of hippies?! Dear god man are you trying to make me see things that cannot be unseen!

Timo82 (Mar 13, 2020 at 14:03)
@Happypanda1337: Z1 has only like 4 spring rate, something like that... really not at the same level as push or vorsprung. I still really prefer vorsprung as it has hydro bottom out and is canadian so easier to get/tune/service/warranty and cheaper for me. EXT fork should feel like a coil fork but without the weight... well that's what they seems to say! I am waiting for price and weight actually...nobodys can tell me right now.


They said something like they continue to work as normal so everything's fine!? Pretty sure the fork is gonna be too much money for me but wanted a shock.... maybe I'll buy something else to start the season and buy it after, just to be sure!! :S

gemma8788 (Mar 6, 2020 at 14:47)
@bishopsmike: These pics show the routing better. www.mtb-news.de/news/gefraester-federgabel-prototyp Looks like it might be compatible. You'd think being able to run a mudguard is a must, and yet look at all the bikes without bottle mounts ; )

Trickstuff (Mar 6, 2020 at 12:05)
Haha. I Just Had Beers with Cornelius here in Freiburg, Germany. Really wish we were in Rotorua to promote a fork.

christiaan (Mar 6, 2020 at 14:38)
This is a trickstuff fork if I am not mistaken, maybe Cornelius helped develope it he used to work for Trickstuff, but do not think it is a Intend branded fork

reverend27 (Mar 6, 2020 at 17:37)
And being an owner of your best 2 piston brakes in the world the Piccola I shudder to think how much this will cost. And even greater shudder to think that I will find a way to own one.

OpeSorryAbootThat (Mar 6, 2020 at 12:00)
We don't know what this is or who made it, but we still managed to get an entire photoshoot with it!

maxyedor (Mar 6, 2020 at 12:19)
You guys were able to do a full photoshoot with it, but you couldn't even figure out how much travel it has, or get a definitive answer on who made it?

sino428 (Mar 6, 2020 at 14:20)
Not sure why that is so odd. If a company produces a prototype and sends it out under some riders at an event like crankworx its obviously going to be seen so there's no harm in letting PB take pictures. They aren't hiding the existence of the fork. But that doesn't mean they need to tell PB any details if they are still in the early stages of testing.

BlurredVision (Mar 6, 2020 at 13:04)
"was spotted in the Crankworx Rotorua pits"
Looks like it was just standing upright in someones back yard

Mondbiker (Mar 6, 2020 at 11:59)
Well, I´ve seen it mentioned as trickstuff prototype before, Kornelius used to work with them so it´s natural he could be involved. www.mtb-news.de/news/gefraester-federgabel-prototyp

Kainerm (Mar 7, 2020 at 21:41)
The Article says it was ridden by a Trickstuff employee, not that it is by Trickstuff. Important difference!

chezotron (Mar 6, 2020 at 12:41)
Shiny and alluring but ultimately not what you wanted. Sell on classifieds.

Timo82 (Mar 7, 2020 at 14:42)
Ugly?! Mmmmmm okayyyyyyyy.... I suppose you were waiting for a fork review with your joke already in your mind and just wrote it anyway because you were so proud.... even if it's the better looking fork we've ever seen! lol

The raw Manitou Mezzer was nice but they didn't even sold them.....only black for us! This one is just fuc*%/ insane!!

techride (Mar 6, 2020 at 15:31)
You mean like every other manufacturer out there? Nobody has a solid arch. Intend did the smart thing though and added a cap that keeps the webbing or lattice from filling up with crud, negating the weight savings.

Primoz (Mar 8, 2020 at 13:29)
I think this is bonded together, at least the two lower legs and the bridge connecting them. The edge between the parts is too pronounced and is dirty, which is not something you mould or cut. But it something that you glue or screw together. Since the screws aren't visible, I'm saying glue.

I'd say something similar for the dropouts (that way you can just use pipes for the main part of the lowers and lower the complexity).

Gluing together cut parts is a common thing in the prototype land before you get castings so we might see the final product be much different to this.

listeryu (Mar 6, 2020 at 23:36)
it is definitly coming and looks very much different then the fork on the picture

Cornelius, can you please not make that groove for the cable? Do it on the plate instead, please.

frank77 (Mar 12, 2020 at 5:21)
I saw some picture in EXT instagram and seems very different from this. This seems a prototype made by Intend for someone else, maybe just for cheching the internals?

BoneDog (Mar 6, 2020 at 11:46)
Back to the inverted vs traditional suspension fork battle! let the thread begin!

JuliusZhuang (Mar 7, 2020 at 20:58)
I always think there's some Connections between intend and Trickstuff

Marininmaine (Mar 6, 2020 at 16:51)
not a huge fan of the un-labled raw look. if they put some branding on it it would have potential to look tight af

getonyourbike (Mar 6, 2020 at 11:50)
Definite no. They've posted loads of shots of parts of it and it's way further along than that. See their Insta: www.instagram.com/extremeshox/?utm_source=ig_embed