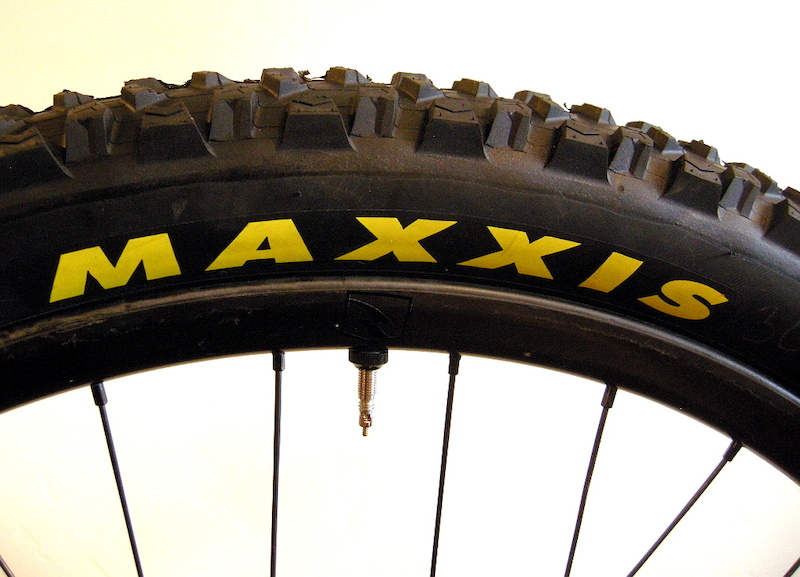 The new tire's edging blocks are pronounced - a given for Maxxis gravity tread, but siped with a V-groove to offer a more sensitive bite.

We saw some interesting looking downhill tires on a Pivot Phoenix on display at Dealer Camp in Park City, Utah. The 31-pound carbon DH bike was shod with unlabeled Maxxis 27.5-inch DH tires that featured an aggressive tread pattern which deviated from the tire maker’s tried and true Minion and High Roller designs. When asked, officials at Pivot had little or nothing to say. The tires were mounted tubeless and felt as if they used two-ply sidewalls. The rubber was quite soft and the tread was sticky to the fingernail test. 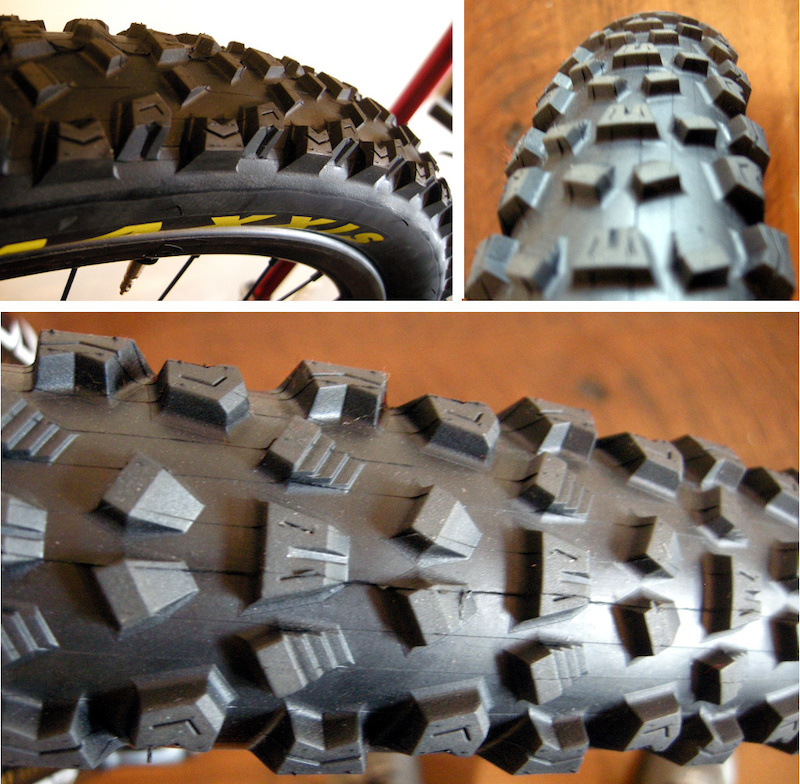 (Clockwise) Well-spaced, similar-sized tread blocks are positioned similar to the Schwalbe Hans Dampf, but the faces are angled to give the unnamed tire a faster roll. A more rounded profile is new for Maxxis's gravity range. Novel stair-step profiling on the transition blocks may be a nod to better braking while entering corners.

The tread pattern evoked a supercharged version of the Schwalbe Hans Dampf, with a similar pattern of large, angled blocks, but with lots of edge treatments and siping. The width appears to be a full, 2.4 inches, and we expect the weight to be on the lighter side, as the display bike was proudly hanging from a scale - an indication that Maxxis could be developing the new gravity tire for European enduro and fast DH venues. Pivot signed on this year with Maxxis for its race team and its production bicycles, so it is no surprise to see new rubber being tested by the brand. 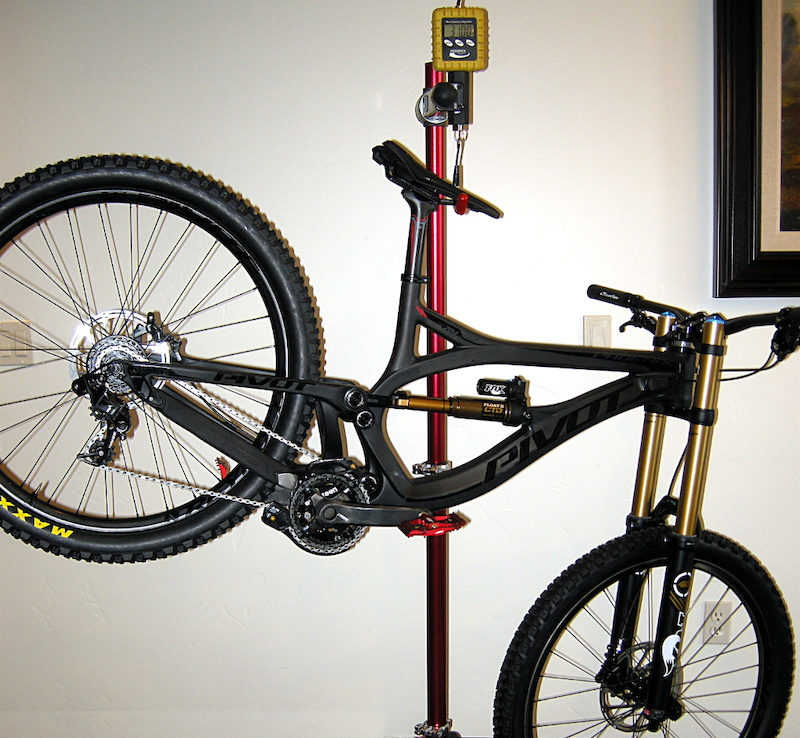 Pivot stated that they were confident that the unpainted carbon Phoenix could be whittled down below 30 pounds, while still being outfitted as a true DH racer, so we expect the new Maxxis tires to be on the lighter side of its DH range.

mentalhead (Jun 24, 2014 at 7:02)
26" is the most common tire choice so nobody is that mad to refuse the largest piece of the pie. Don't take the bike articles telling us that 26" are dying too seriously. The truth is that most people do ride 26" bikes and they will do it for a long, long time. 650B is king of innovation, modern word like "enduro", and everyone is exited to claim he is being part of the trend. Once 650B stops being a hit, you will be surprised how many people still rides their 26" wheeled bikes and buy new ones.

laynehip (Jun 24, 2014 at 7:08) (Below Threshold)
I disagree.
26 inch wheels are dead in every biking genre except for Downhill and DJ, and every month you see more 650b downhill stuff.
Soon you won’t be able to find a half decent 26 inch downhill bike. 26 inch bikes are dying. Sad but true.

bike from my lbs. Went in to the shop and checked the tire selection. Could not see ANY 26" tires so i asked the shopowner about them... He said: " no one really buys them anymore so we only got 27,5" and 29" tires from now on". What the F*CK!!?? I really dont go there so often anymore....

Rocky-Urban (Jun 24, 2014 at 7:11)
There is absolutely no way that 26" is dying. The size that I do see dying is 29" Eventually those will be phased out and guys riding 29ers will eventually be paying premium prices for tires and other 29er related parts. 650b looks like will be the new standard and a standard that will stay but 29er's are definitely dying out. Slowly but surely.

laynehip (Jun 24, 2014 at 7:30)
I think the disparity in tires at CRC is due mostly to the fact that 650b is fairly new and manufacturers probably have millions of 26” tire inventory they still need to sell.
At for the poll on Pinkbike, I think since it is mostly a DH dominated site (I have no numbers to back this up but a feeling, may be incorrect) so it fairly biased with a relatively small sample size.

kjl12 (Jun 24, 2014 at 8:39)
Most 26" riders aren't getting their stuff in shops anyways, we're the bargain hunters, OFC shops stop carrying what we're always bidding them down on when Amazon is out.

he said the bulk of their mountain bike range is 27.5 for 2015, with no 26" (even DH) and still doing 29" for the XC racing crowd that absolutely love / want the bigger wheel

bngofast (Jun 24, 2014 at 13:26)
What ^^^^^ he said. Santa Cruz... No 26 inch offerings anymore, Giant...virtually none, Specialized... no 26 inch trail offerings for 2015, and the list goes on. For the moment, the 26 inch wheel's fate is sealed and it will quickly become increasingly difficult to find a good selection of 26 inch parts. Who knows if it'll come back as the population of the mountain bike market changes but for now it's not really a question anymore... 26 for MOST purposes, is dead.

riiz (Jun 24, 2014 at 8:34)
I think it looks a lot like the On-One Chunky Monkey, which is a tire they produce in their factories for On-One. It is amazing tire, and cheap at $35 shipped with EXO sidewalls.

aidy (Jun 24, 2014 at 6:18)
Judging by that and the fact the new maxxis shorty looks loads like a muddy mary i think the sudden rise of schwalbe has made maxxis start to panic. They do seem very good at designing very similar tyre to others too. The high roller been a fine example.

DARKSTAR63 (Jun 24, 2014 at 6:27)
Yeah first thing I thought is that it looks like a Schwalbe tread. They have no doubt taken a chunk of Maxxis business and so an offering like this does not surprise me.

gavisasav (Jun 24, 2014 at 6:31)
yeah this tread immediately reminded me of the Hans-Dampf tire from Schwalbe.

deli-hustler (Jun 24, 2014 at 7:48)
I saw the first photo and thought Hans Dampf, then saw the other photo and was like oh that actually looks a bit new. Nice looking back tyre with a Shorty up front.

corvus1 (Jun 24, 2014 at 9:29)
Spot on. The round profile and knob placement makes it look like a ramped version of a Hans Dampf. Although the side knobs look a bit burlier than the HD

aidy (Jun 24, 2014 at 10:32)
Fair to say i'll be sticking with schwalbe. Maxxis used to be value tyres, now they've shot up in price. Not bad to say the minion has been on the fo since the late 90s or something

aidy (Jun 24, 2014 at 14:45)
Prices here between schwalbe and maxxis arent far apart if you shop around. Maxxis have doubled in price the last few years.

Matt76 (Jun 24, 2014 at 9:02)
Right I'm a little confused here. How the hell do pivot get a dh bike with dual crown forks and dual ply tyres to weight not much more than my trail bike with light weight forks, single ply tyres and light weight wheels single ring etc etc. Find it hard to believe.

erSindaco (Jun 24, 2014 at 7:20)
Seems a good race tire. But for a common use... I don't know! After a few days of using this tire those little teeth will become flat. They make such a complex project that will lose its characteristics in no time...I'm not convinced!

game (Jun 24, 2014 at 12:19)
Looks like it will be good for hardpack and dusty bikepark type conditions, nice round profile lots of tread and no tight spaces to pack up

Spark24 (Jun 25, 2014 at 5:13)
Whats the point in making a tire lighter when they should be making them stronger?... This is DH ffs.... Pointless saving weight on when the tire pinches on the first rock garden.... If your name is Aaron Gwin, this does not apply to you.

chrisk (Jun 24, 2014 at 7:57)
Maxxis is affiliated with CST and it's funny how much these look like the Rock Hawk. The Rock Hawk is only $19. Pinkbike should do a review on that and the BFT by CST.

CST and Maxxis are both brand names that Cheng Shin Rubber of Taiwan do business as.

dmadness (Jun 24, 2014 at 19:59)
looks sooooo much better than that shite kenda tire review from last week... maxxis knows whats up with tires, these look pretty good, would definatelly give this tire a try.

downhillrob2010 (Jun 24, 2014 at 9:34)
It's one of nicest performing shocks I've used in a while, never had any issue of heat fade or anything down extended runs, I suspect if your hitting wc speeds the story would be different, like a few years back when peaty was blowing up vivids and had to get custom shock mounts to allow a longer shock, but for most regular people the float x I can see being a good choice, especially on more pedalily tracks where flipping it in trail will give a little more support yet still feel lively and plush

Buggyr333 (Jun 24, 2014 at 8:49)
I wonder if they will actually measure out to anywhere close to their measured size. Unlike minions and high rollers. All the weight for none of the size!

Sorry, but Hans Dampf is a fail in wet conditions / light mud.

Vanguard (Jun 25, 2014 at 3:18)
Depends on what and where you ride and personal preference, of course. But I'm not the only one who's moved from Hans Dampf to Conti Barons for better grip on wet roots, wet conditions and light mud.

notthatfast (Jun 24, 2014 at 7:35)
Clearly tyres matter, I'm fairly fussy about mine, I'm not sure a prototype maxxis tread pattern warrants a whole news article and this level of excitement/analysis though!

fracasnoxteam (Jun 24, 2014 at 8:05)
oh no mistake, tyres are clearly important, I can't agree more. But always amazing to read people writing that one looks like an other one "except this micro details on the side". I'm riding minion larsen and a schalbe, don't remember wich one. Larsen is clearly different and easy to recognise, but for the others... but be sure I appreciate them!

notthatfast (Jun 24, 2014 at 8:32)
Actually I'm lying, i'm not very fussy. I'll buy a set of tyres that are meant to be good and keep them on my bike until they're worn out. Unless I'm racing or riding an uplift day and it's daft wet.
Post a Comment