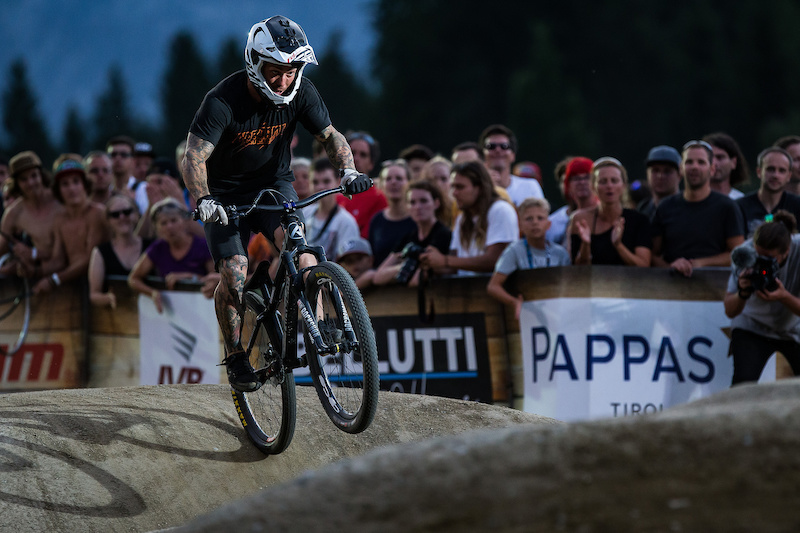 Charging on the Raiffeisen Club Pumptrack Challenge presented by RockShox in Innsbruck.

He's spent his year travelling the world, pushing his way onto podiums, and living the ride, all with his accomplished fiancé by his side. But Barry Nobles, the consummate professional and competitor, is hungry for more.

We talked to him ahead of the Giant Dual Slalom presented by 100% about his big year, The King of Crankworx, and what's next for mountain biking's most dynamic duo. 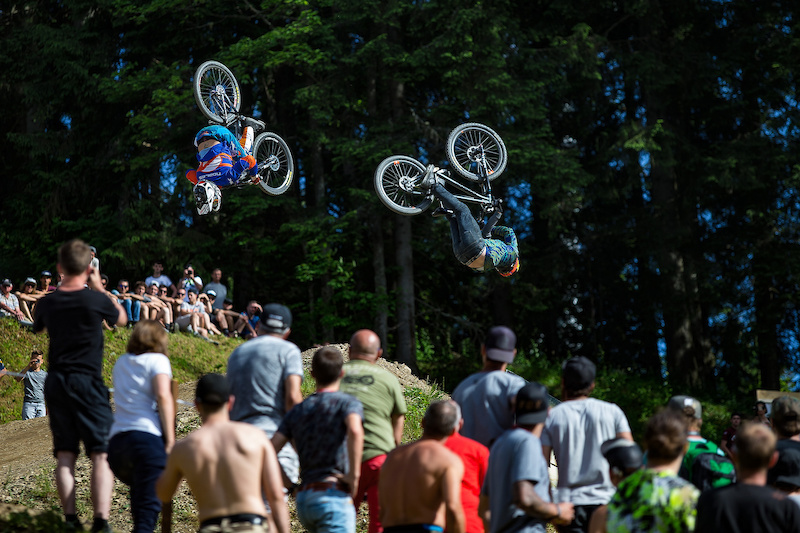 Competing in the Crankworx Les Gets Dual Speed and Style, 2017

What a year for you and for Caroline, and for the two of you as a couple. Hitting up all the Crankworx stops, competing in different disciplines and really pushing for those King and Queen titles, plus working on your Living the Ride project and really getting amongst it wherever you’ve been travelling. How are you managing? How do you keep on top of everything you’re doing?

We're both super competitive people, and we’ve done so much and it's been such a fun year, but it's also been one of the worst seasons I've had in a long time. Things haven't really gone my way. But it is what it is, and Caroline's been holding it down for the two of us. She's been absolutely killing it this year. It would have been cool to see her a little closer to the Queen of Crankworx title, but with her not having much downhill experience in the last couple years it definitely showed. So heading into Whistler she decided to put the downhill bike away and just focus on the events she knows she can do well at. So yeah, it’s been a good year, it's just the competition side has not been ideal. In everything else, we couldn’t have asked for a better one. These Crankworx events are absolutely amazing. 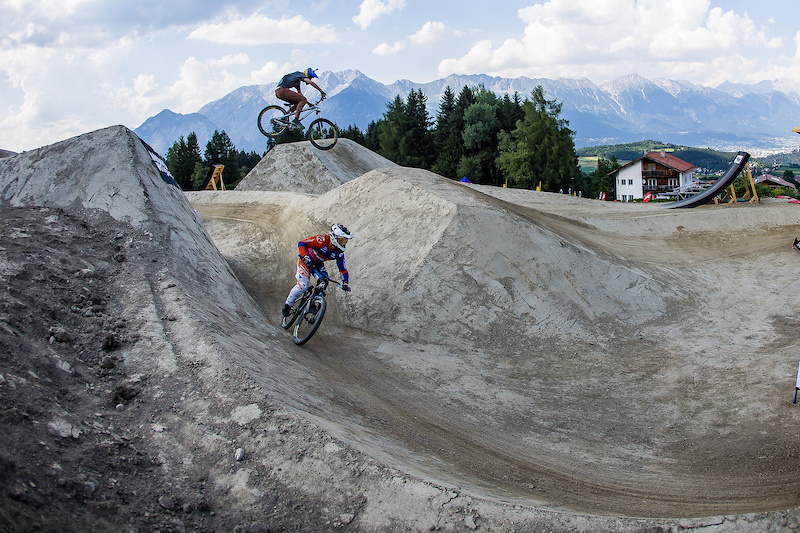 Seems as though, even if professionally it hasn’t all gone your way, personally it's been a pretty epic year.

Yes, absolutely. A lot of experiences we don't normally get to do. We kind of caught ourselves going to these events and not getting to see things outside of two wheels, so it's been fun actually dedicating time to see the sights and really experience the places we get to visit and compete in and be a bit of a normal person when we're not racing.


And still, while you say it hasn't been your best competition year, you still managed to take home two bronzes...


We're into the home stretch of Crankworx now, with our last stop of the year. What's on the schedule for you?

Dual Slalom today, so it's the last competition for both of us, then Sunday morning we fly out to Italy for the Four-Cross World Champs. After Dual Slalom its time to recover and just kick back. We’re actually jumping on a plane tomorrow and flying in a three-seater plane and doing a mountain tour around the area, so it'll be a good way to cap off Crankworx Whistler. 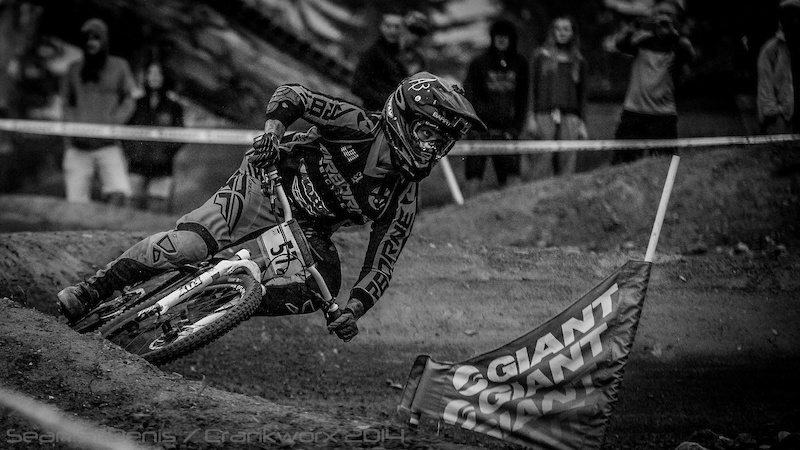 I'd say it’s just that head-to-head racing format. Four-Cross has always had a good showing because everybody can see it. Downhill is massive, but you don’t actually get to see the whole race, whereas Dual Slalom you see two dudes head-to-head all the way down the track. It's just like pumptrack racing but you have a whole other discipline of riders in there 'cause you have your pumptrack guys, then you have your downhill guys who can definitely hold their own on the dual slalom track. So I think that’s what it is. You get a mix of different riders


I was looking at the roster of people who compete at Sea Otter this year, and you see such a huge range. Today we've got guys like yourself, Gutierrez, Ropelato, Strait, van Steenbergen—all these riders from different disciplines. In a way, it's like this event is the great equalizer.


How big a factor is fatigue at Crankworx Whistler with practice, racing, sponsor obligations, parties, and for you, living the ride?

Crankworx Whistler’s the hardest one by far. You get here and you want to get on the lift, you want to go do runs, you want to do A-Line the first day. There's just so much here. So I think actually for me this year, coming into this event nursing an injury it actually allowed me to rest a lot more. This is the first time I'm still feeling pretty fresh at this point, 'cause I haven’t been blowing myself out. This year I've had three or four days where I'm just sitting around hanging out which has actually been incredible because you get to spend time with good people and eat good food, and not get totally caught up in the two-wheeled world like normal. So you definitely have to try to keep things balanced. I'm getting older now and there are so many things I'm learning this year that I should've done years ago, whether in my BMX career or now in mountain biking. Just with kind of balancing competition and recovery. I just can't help myself. I always want to get there and ride. I'm such a kid at heart and I just want to be on my bike, any chance. 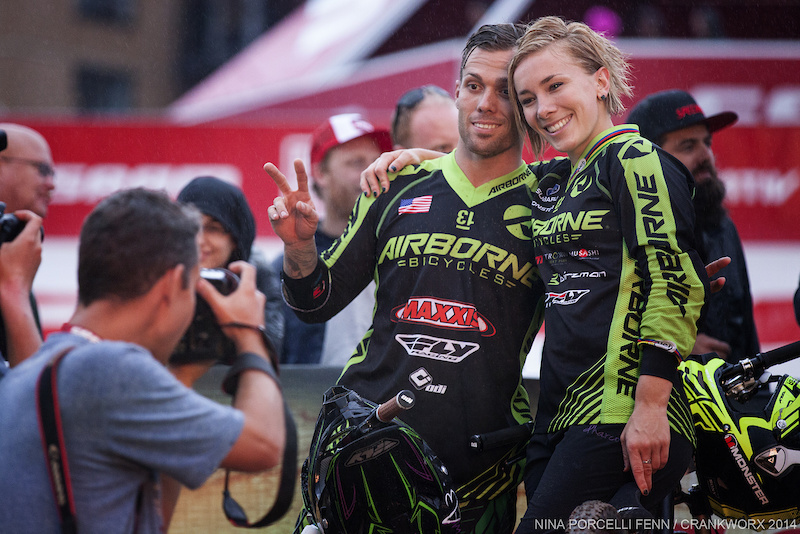 Plus, adding another layer to the mix, you are Caroline are like a two-person pit crew for yourselves.

Absolutely. The logistics behind the scenes are intense. I mean, we came to this event with seven bikes. I got back from pumptrack last night after Caroline won, and I wasn't super pumped because I didn’t make it to the final four, so I had to take my sour attitude and sit down in the parking deck of the hotel and get two bikes ready for dual slalom today. We ended up having to borrow parts off our slalom bikes to go on our pumptrack bikes, so I had to get them off and put them back. Then there's our trail bikes for A-Line and whatnot, and tire selection... the list goes on. So yeah, we’re a two-man show. I have to play mechanic and make sure our bikes are good to go, and Caroline handles our emails and stuff behind the computer. It's really tough, especially when you go to Europe and have to travel. It's one thing to load up the van and drive from Southern California to Whistler, but when you’re heading to an event like Crankworx in Europe and you need a pumptrack bike, a slalom bike, a trail bike... I mean that’s six bikes between two people. There are teams and bike brands out here that have mechanics and a team manager that take care of all that. We don’t have that. The perception of what a lot of people see is probably much different from what it's actually like behind closed doors. But we make it work.


2017 has been huge, with Living the Ride, competing in the full Crankworx World Tour, and everything else you guys have taken on. Have you had any thoughts or chats about what your 2018 is going to look like?

I'm not going anywhere while that King of Crankworx title is in my head. It's back to the drawing board in the off-season. Re-define a few things. I mean, I'd love to be out there on the slopestyle course, but that’s so far ahead nowadays. I'd rather just focus on Speed and Style and maybe work on smaller combo tricks instead of trying to learn big tricks that don’t score as much as you'd think. So yeah, I'll be here, and Caroline’s got a few BMX things. Plus, I haven’t stopped BMX, I still plan to do a couple races here and there. I think continuing to do BMX helps me to stay strong for Crankworx, whether it's getting a gate start or being strong on the pumptrack. So we’ll be here.

Watch Barry Nobles take on the Giant Dual Slalom presented by 100% tonight on crankworx.com or right here on Pinkbike: