"Described as a war zone, pinball alley, slop fest, hardest ride ever... The PMBA Enduro had one ambition in this horrible and hopefully unique year: To deliver a safe event. An enjoyable event. An Epic event. And did they ever!" 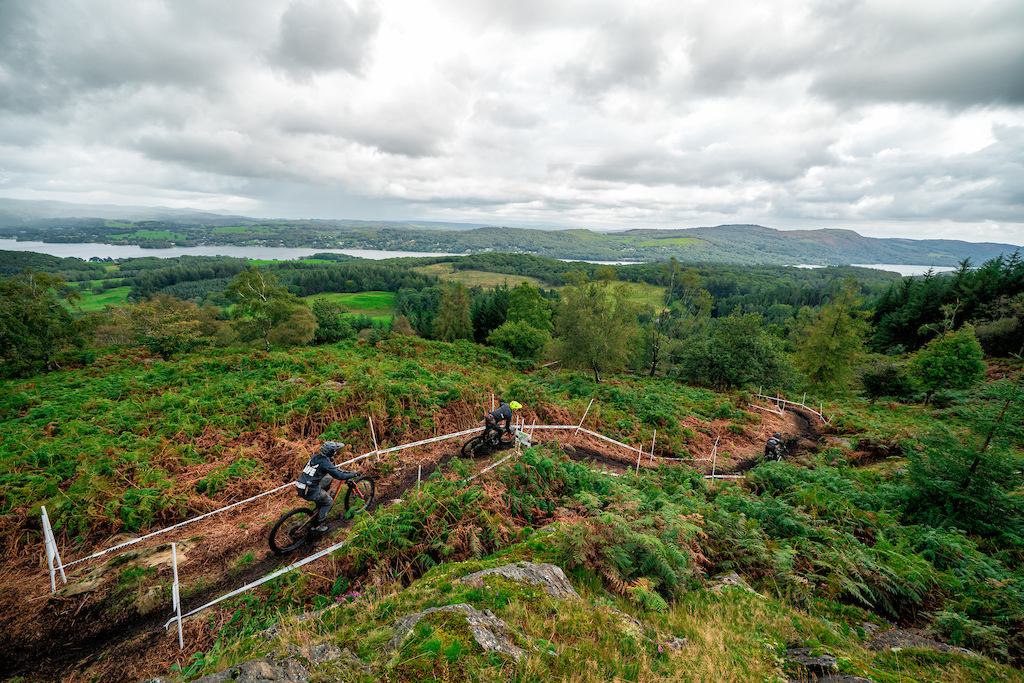 The Lakes, the views and one hell of a good challenge. Racing is back
Kev and his build team worked tirelessly to restore and enhance the Graythwaite trails to ensure that they were as hard and as gnarly as ever, with some new lines and features to add flow and tech. Then the gods of weather conspired to add an additional challenge for riders to really test their mettle. The stages were savage in places, but in a good way. Everything was rideable or at least slide-able. Riders measured themselves against what can only be described as the hardest event of the year and they all went home absolutely extatic (and exhausted) 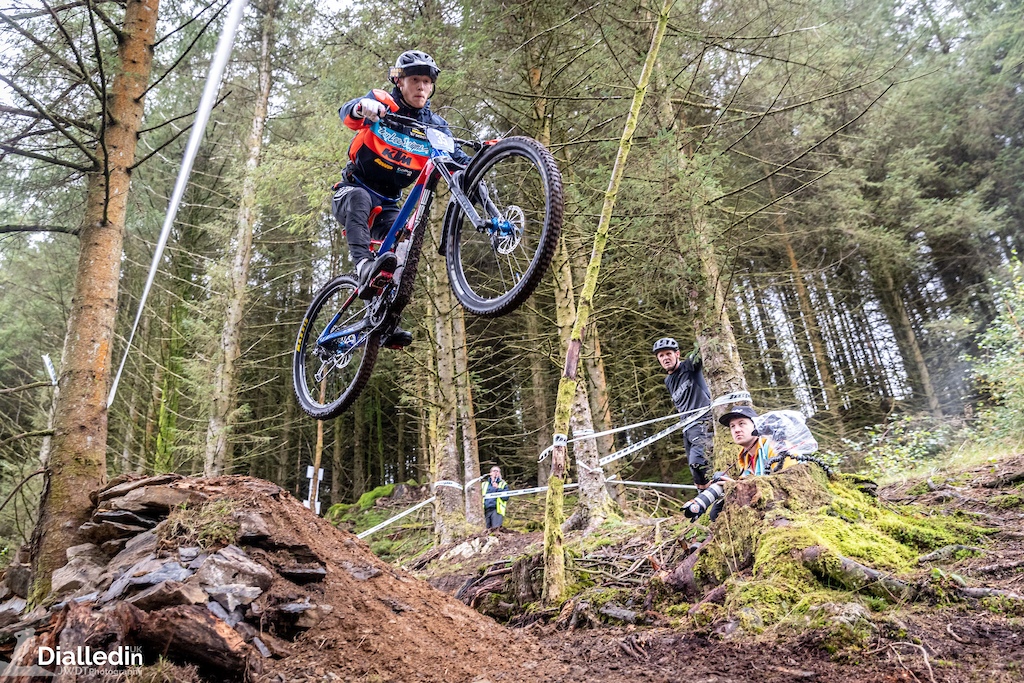 Practicing the new section on stage 1, a huge section of track purpose built for this years event
At the forefront of Kev Duckworth's (PMBA Enduro Series organiser) mind throughout this year has been how to run a safe, covid secure event, with minimal risk to riders health and of the event being cancelled. Hours of planning, assessing risk, negotiation and adapting had gone in even before the event was advertised. Kev engaged with the riders from the very beginning. He is an incredibly open organiser, choosing an open book approach to his thinking throughout the planning stage, engaging with riders and canvassing opinion as to whether he should and could run an event. If he built it, would they come? 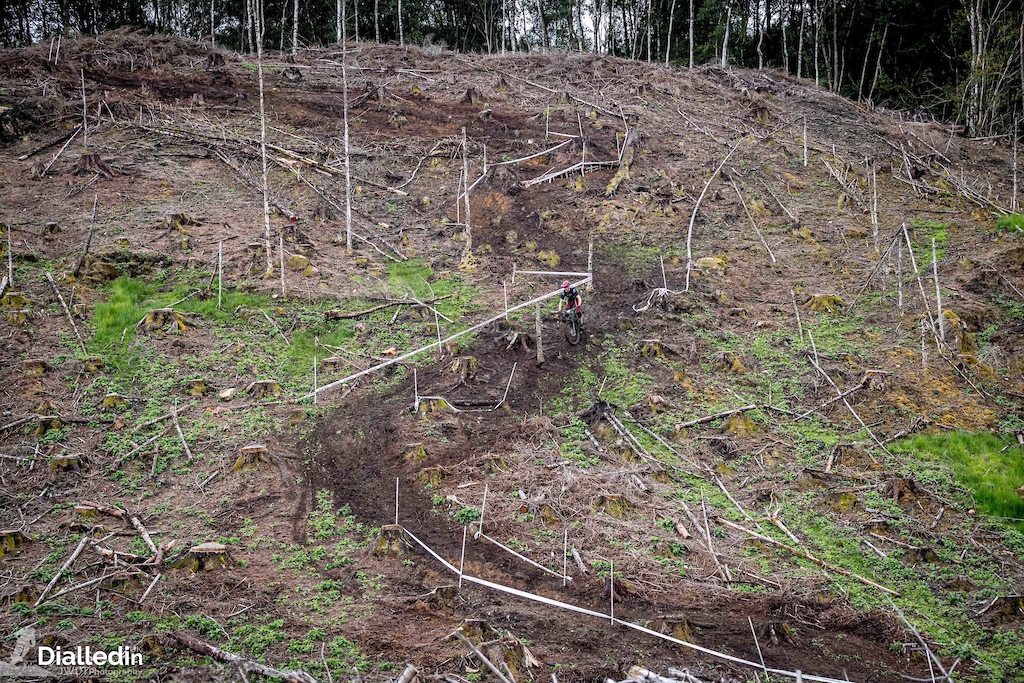 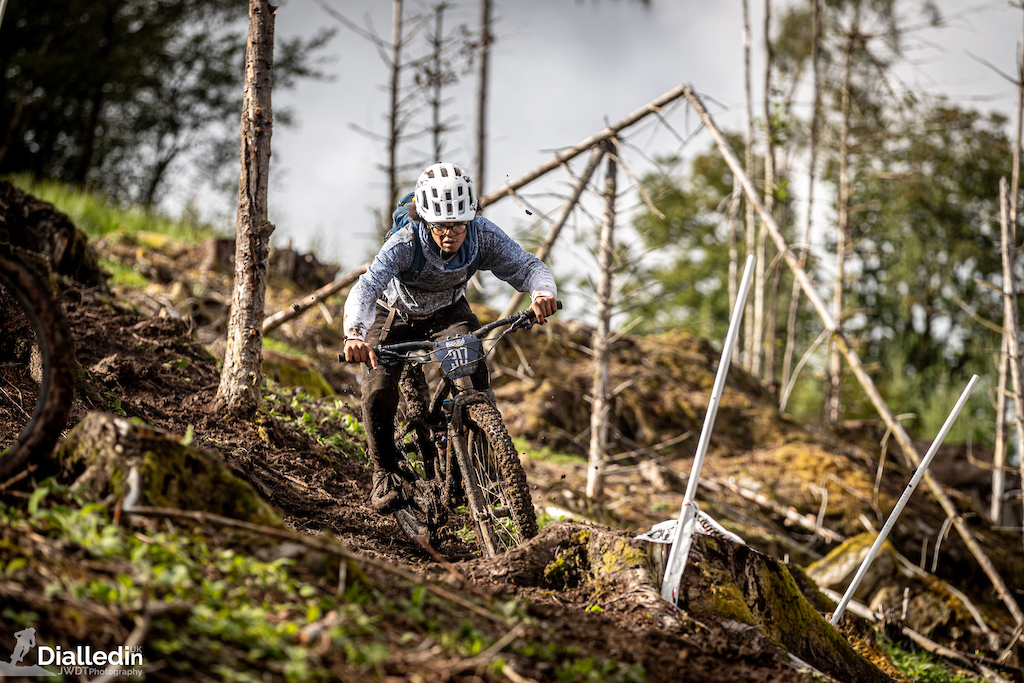 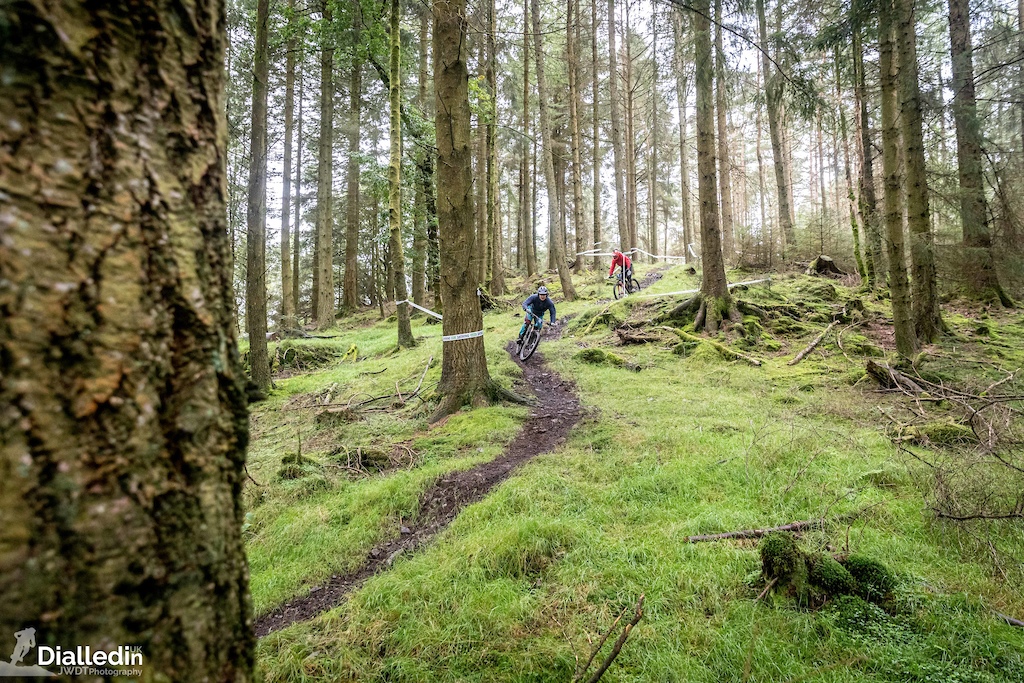 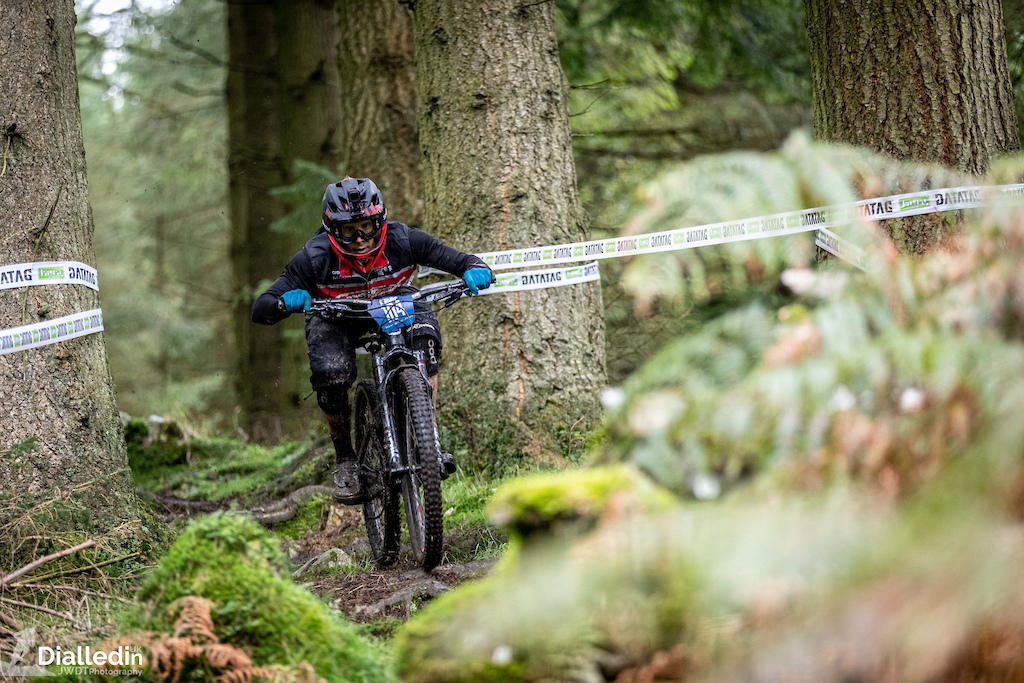 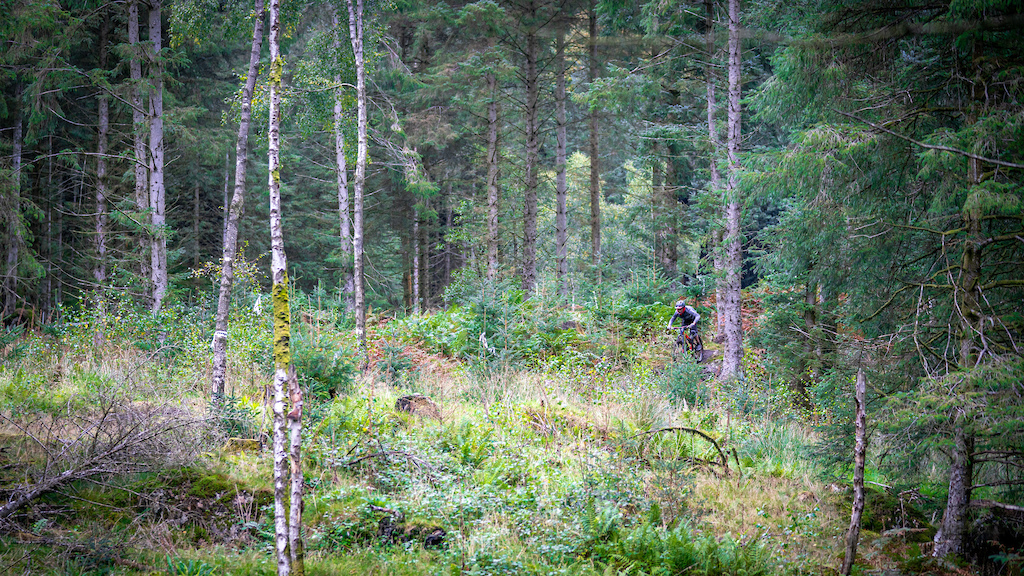 The beautiful woodlands of the Graythwaite Estate are a perfect setting for racing
Those hours of stress all culminated in the tack sharp point of the race weekend. Rider briefings were all clear on expectations of safety and rider responsibility. Marshal briefing notes were adapted around covid. Safety, safety, safety. Arriving at the arena to be greeted by a marshal again reminding us to be careful, stay safe and think of others. Signs and sanitiser everywhere. Kev was obviously stressed but calm with it, in the knowledge of a good team working with him that understood the requirements and all intent of getting the event over the line in style.

Before the event the feel on the usual facegram channels was strangely muted. Maybe a hesitancy, fearing cancellations. Other events had been cancelled. However, the vibe in the camping field was electric, riders had clearly missed the racing. A really good natured buzz with people realising that this was quite unique in 2020, a full weekend of racing. Speaking to riders there was one clear message: "I can't wait to get between the tapes". 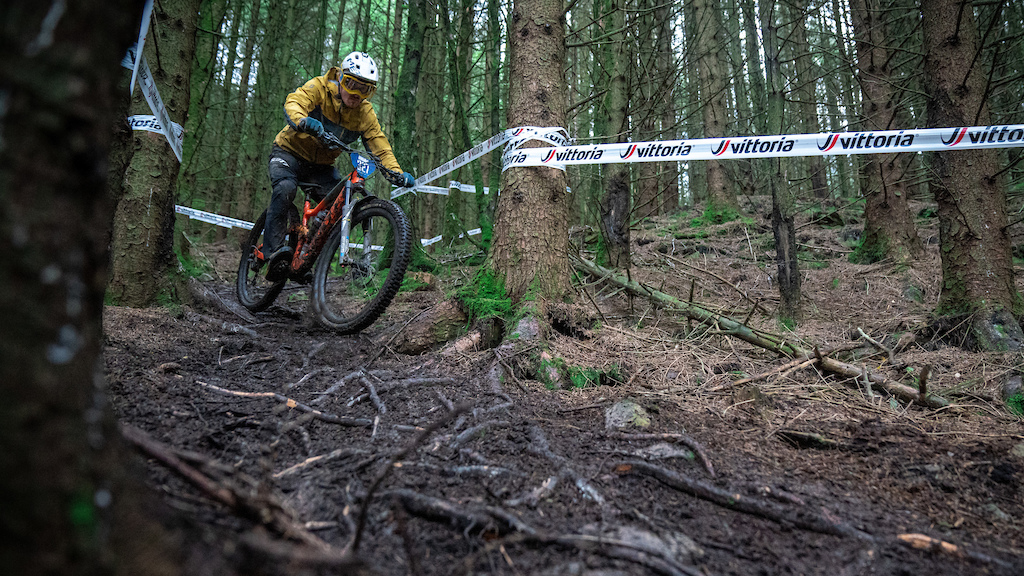 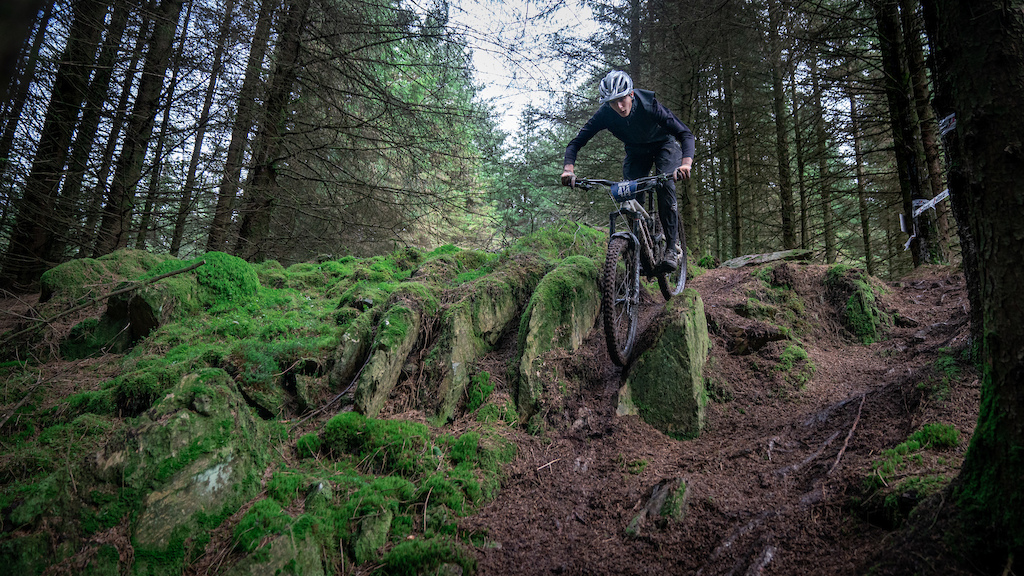 Roots and full gnarly tech were the order of the day
Saturday was given over to practice. For many, if not almost all, this was the first event of the year so many were taking it steady over Graythwaite's notoriously techie sections. These stages don't take prisoners at the best of times, and with intermittent rain the trails were changing by the hour. Whilst riders were allowed to have multiple goes at features marshals were proactively dispersing groups of riders that were gathering to session sections when numbers got too high. The trials were running well initially but were already cutting up by the time practice ended.


By the morning of the race, there had been more rain over night and the trails were slick with mud in places. Riders would have to be absolutely on it to pin these trails.

The Race
22 km of trails and transitions with 1000m of elevation to negotiate over 7 Stages. With the event capped at 500 riders and fully sold out, this was going to be a long day for all involved, riders and marshals. 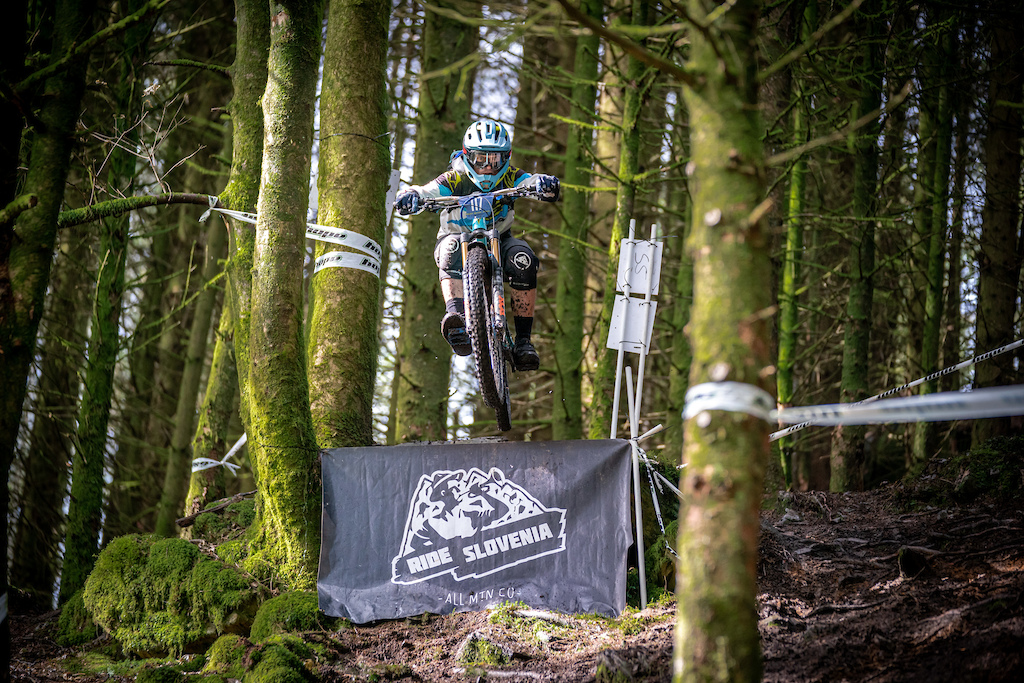 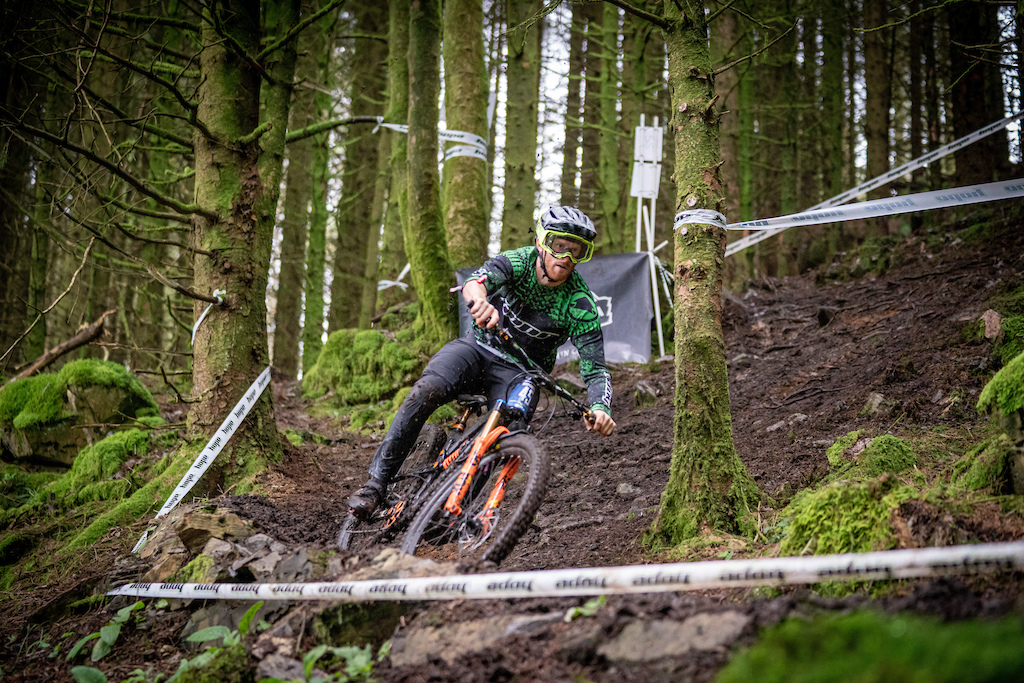 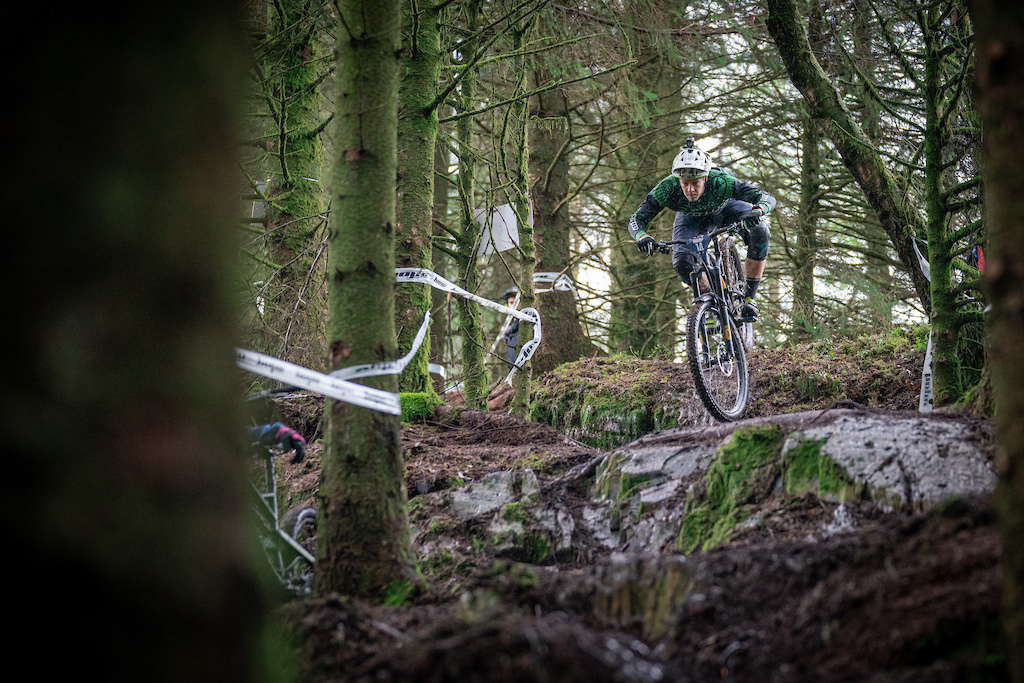 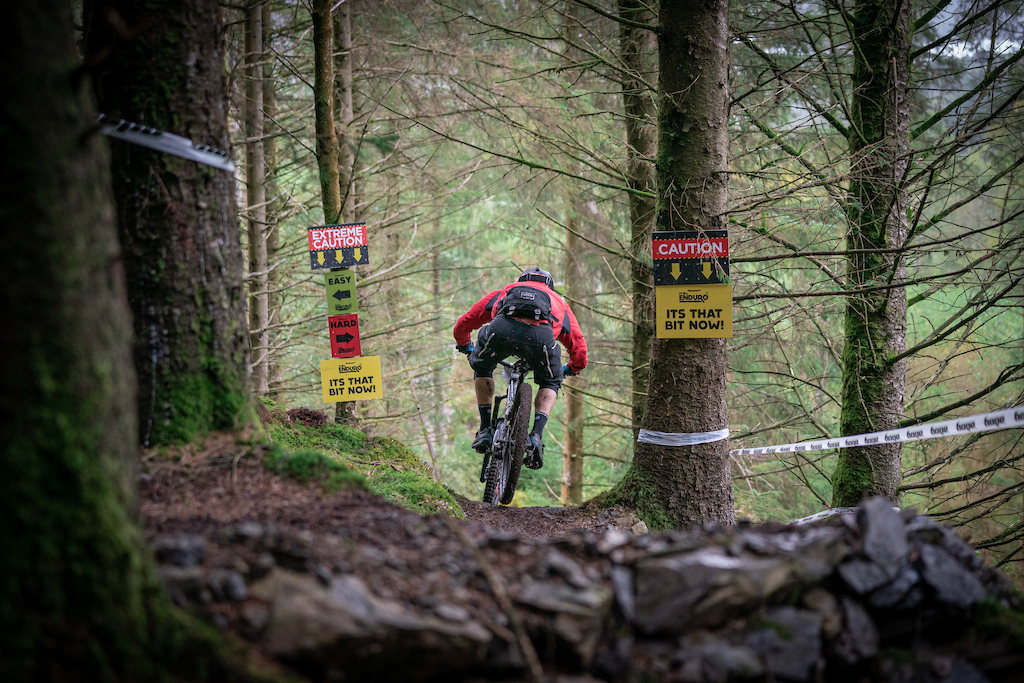 Stage 1 Graythwaite is always straight into the hardest tech. Bring your A Game
Graythwaite Stage 1 is quite possibly the hardest of the day. No easing you in, no gentle warm up. Your are straight into the woods and the gnar starts instantly. Relentless root, rock rolls, big senders and catch berms. If you were expecting a warm up, you've got one! If your lungs and legs aren't burning by the end you must have walked down.

Stages 2 and 3 continue the theme of dark pine forests, dense trees, low light racing. More roots, more tech, and some of the steepest trails outside of downhill racing. 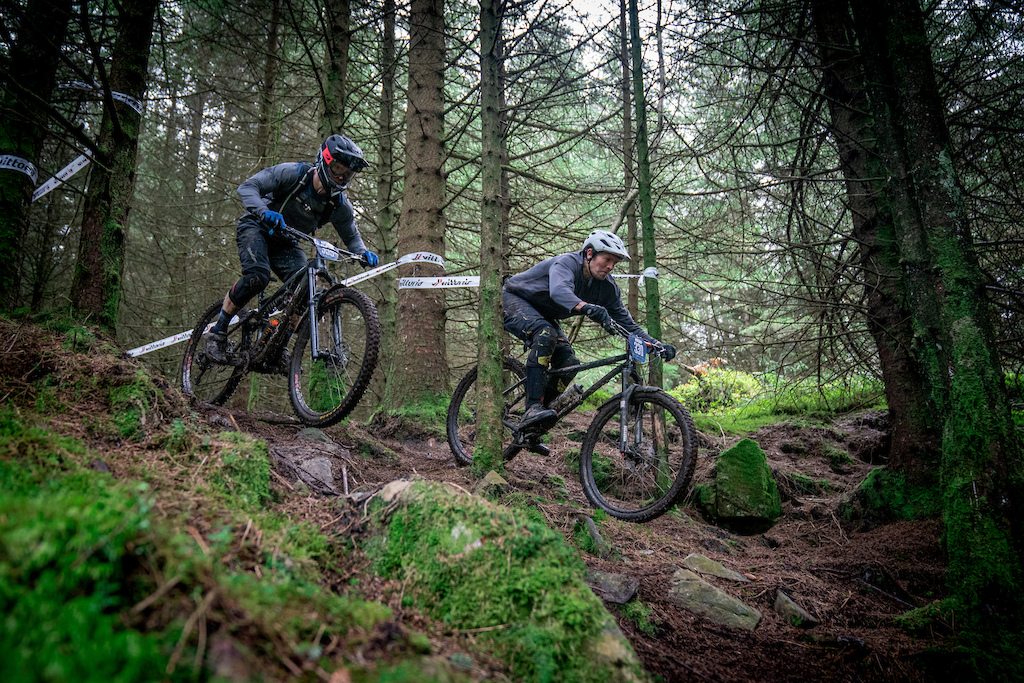 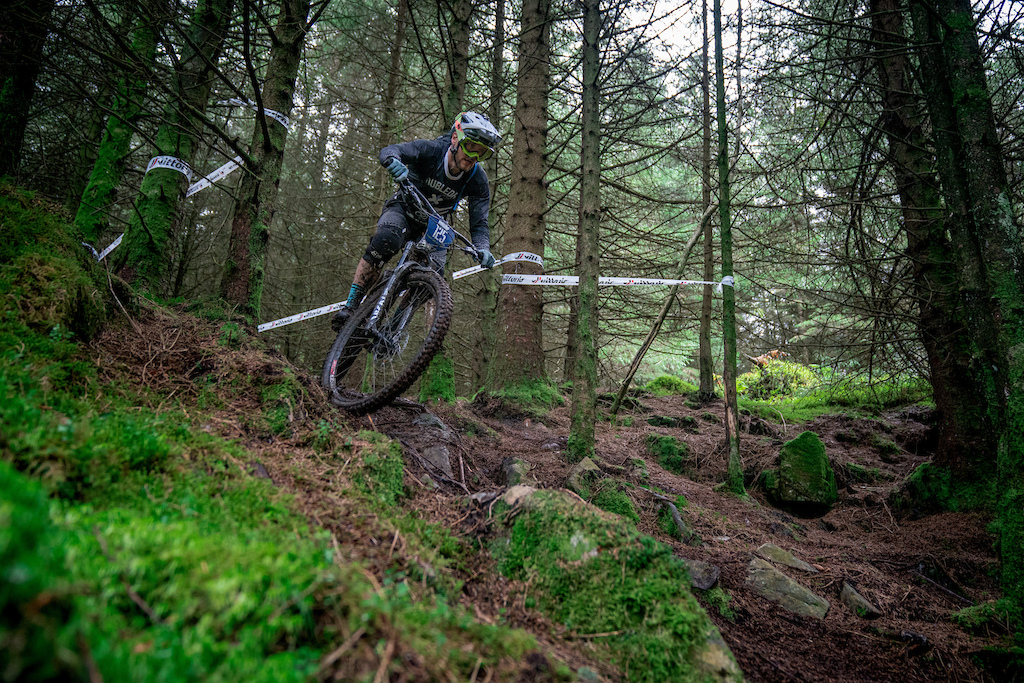 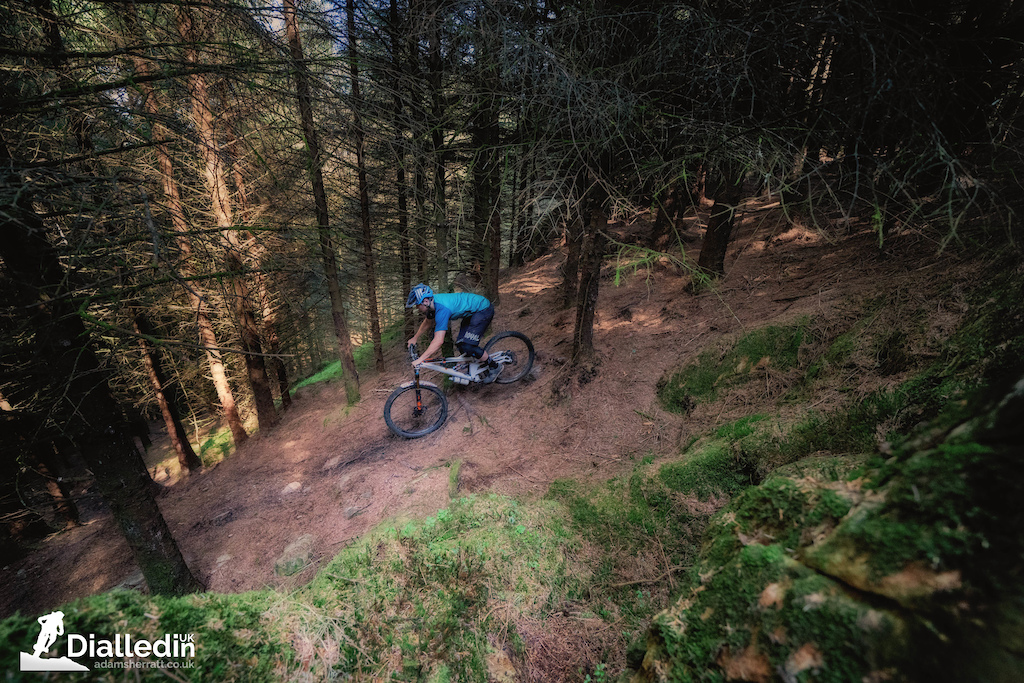 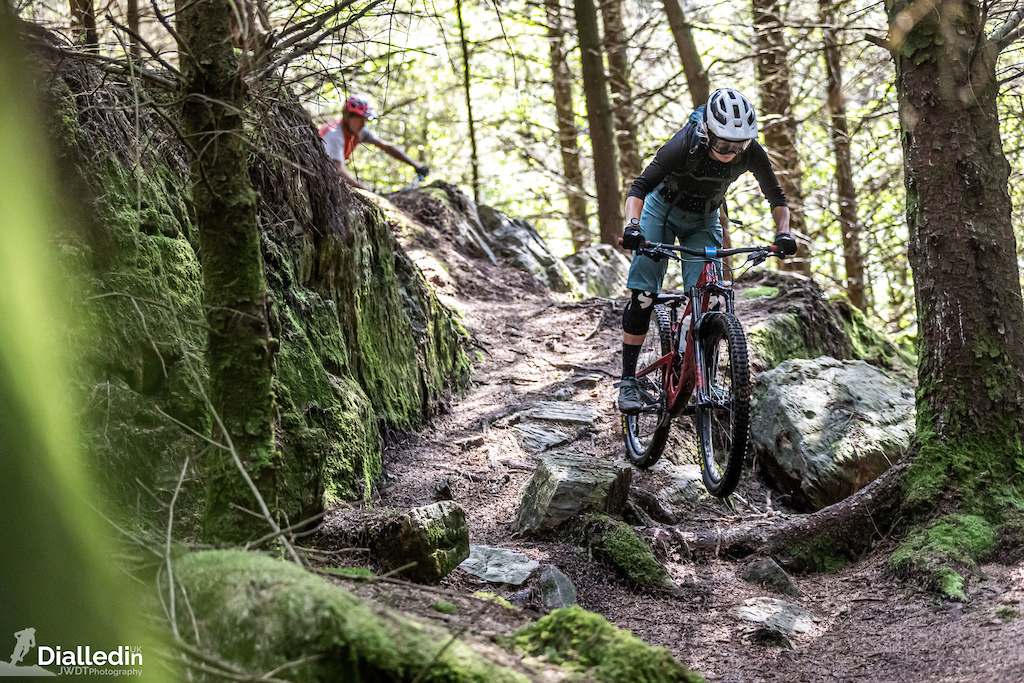 Stages 4 and 5 are into old woodlands, mainly larch and widely spaced into some of the best flow trails on offer...under normal conditions! The rain had brought the slop and the stages were greasy. What would normally have been flow and high speed was often a power game as riders were dragging through the mud. 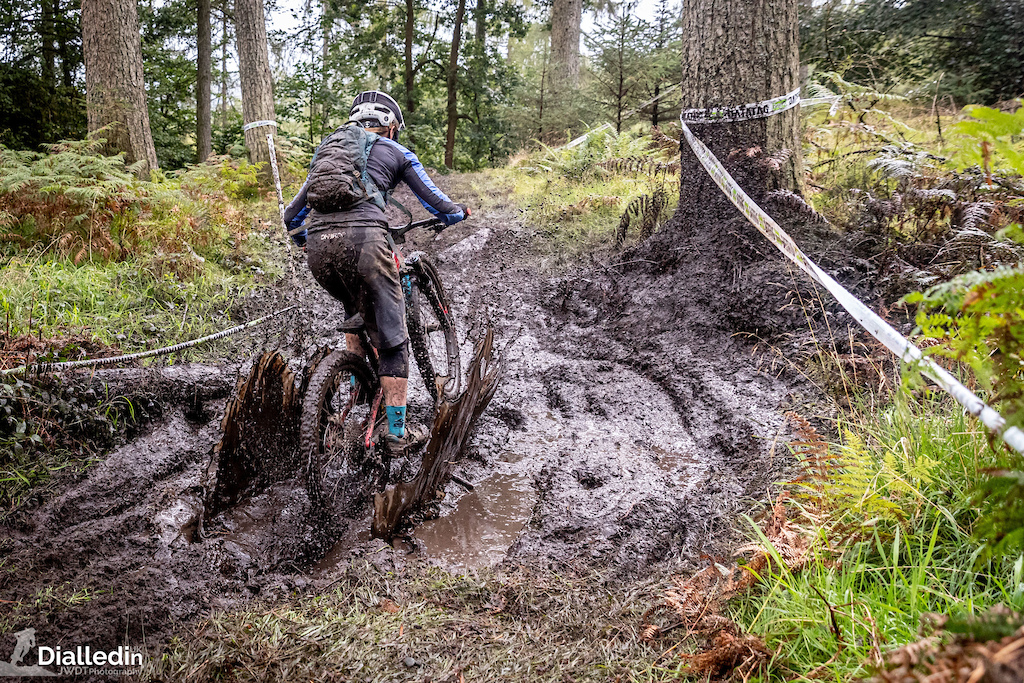 Polly Henderson (U21) took the fastest women's time of the day, slicing through the thick mud on stage 5 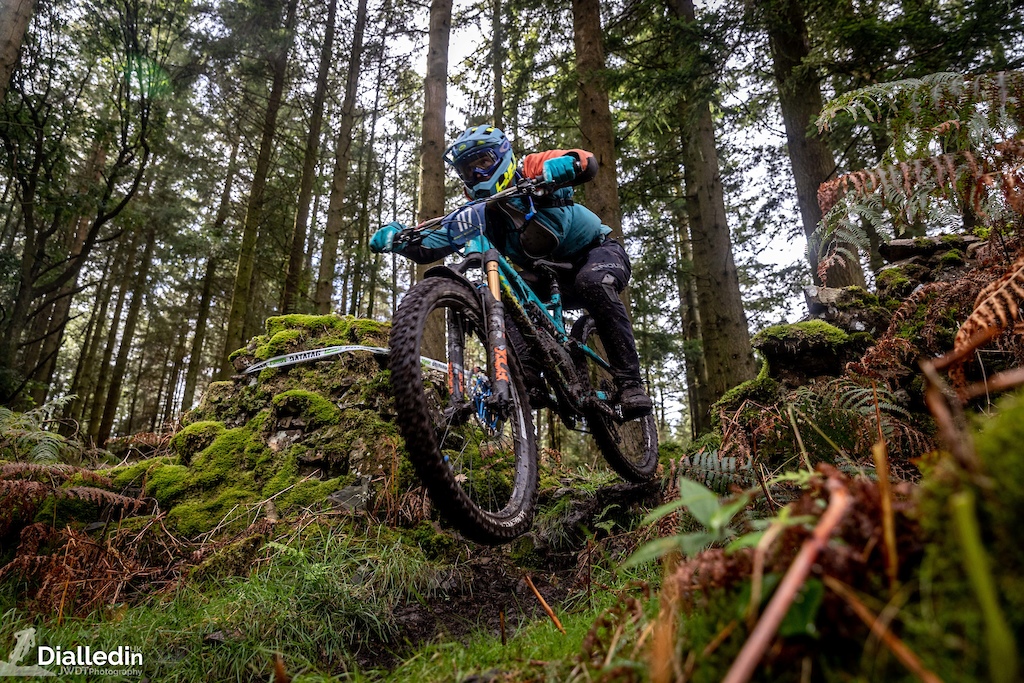 Kevin Doolan full gas through the wall gap
Stage 6 returns the tech-fest. This part of the course has always been part of an active felling part of the Graythwaite estate, and that felling has now extended to pretty much cover the whole stage. All of the freshly exposed loam was just waiting to soak up the rain, and turned to mud. The stage wound down through stumps and roots, incredibly hard riding. 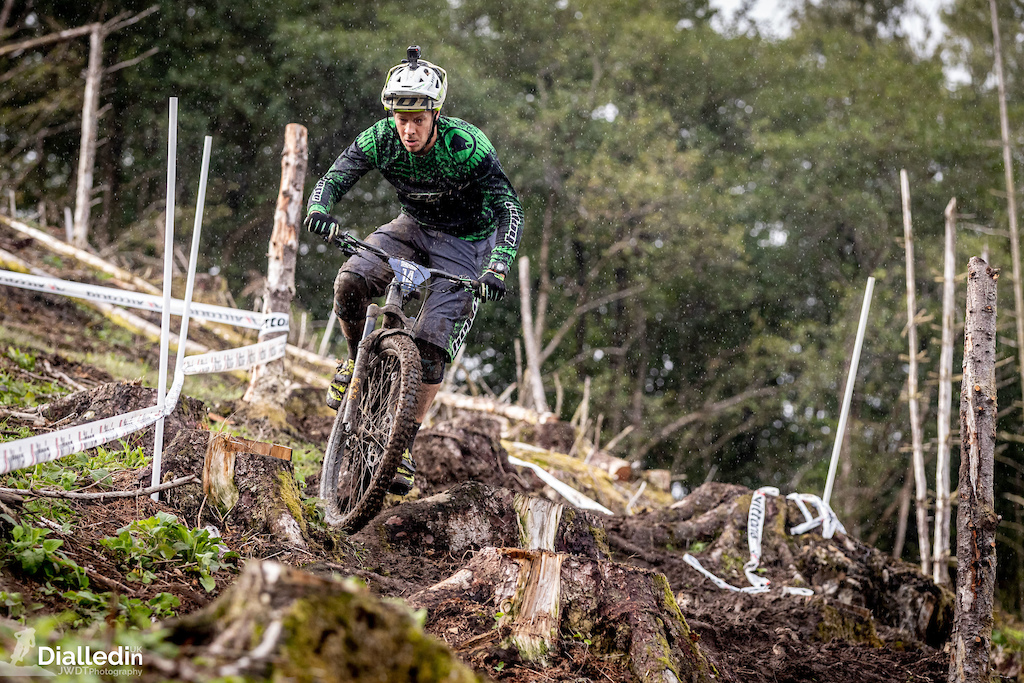 Ian Austermuhle picking a line through the roots
The final stage, stage 7 and the riders are almost home. But there is no let up in the level. This stage starts with flow, but finishes with tech. Carnage Corner was a mud flow, and then straight into the old B line in the woods. In these conditions this was certainly no B line, probably one of the hardest sections of the day, a rocky, rooty chute. Finally, out of the woods, over the root senders (which were like glass) and into the S bends. The finish line in sight and the racers can take stock and realise what they have just achieved. Talking to media colleagues and marshals, we all agree that this was some of the hardest conditions we have seen on a UK race for some time. Absolute kudos to anyone that had their feet on the pedals on stage 7, and real admiration for those still racing at that point. Fitness levels were incredible, riders clearly exhausted but still laughing, joking and smiling. 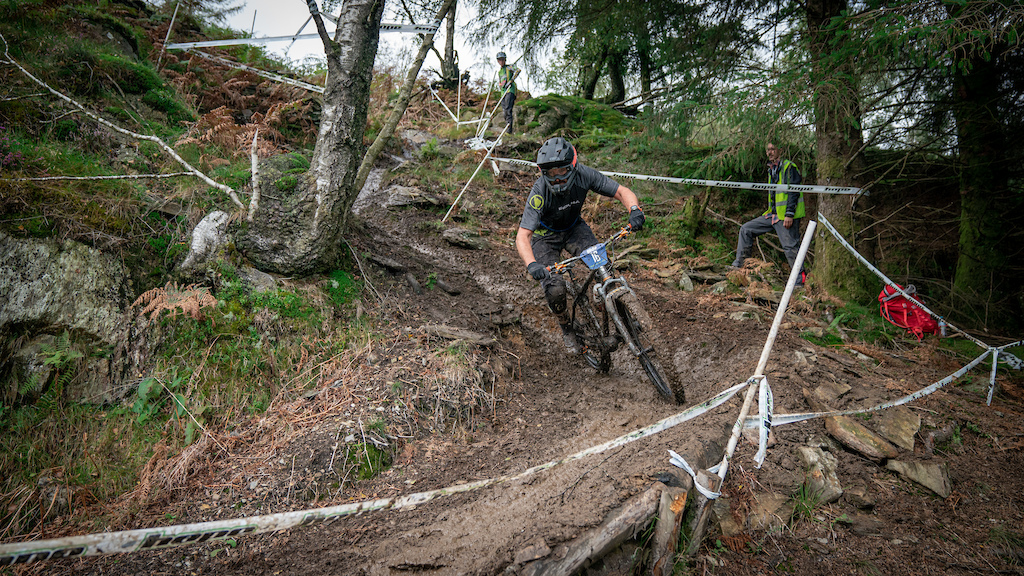 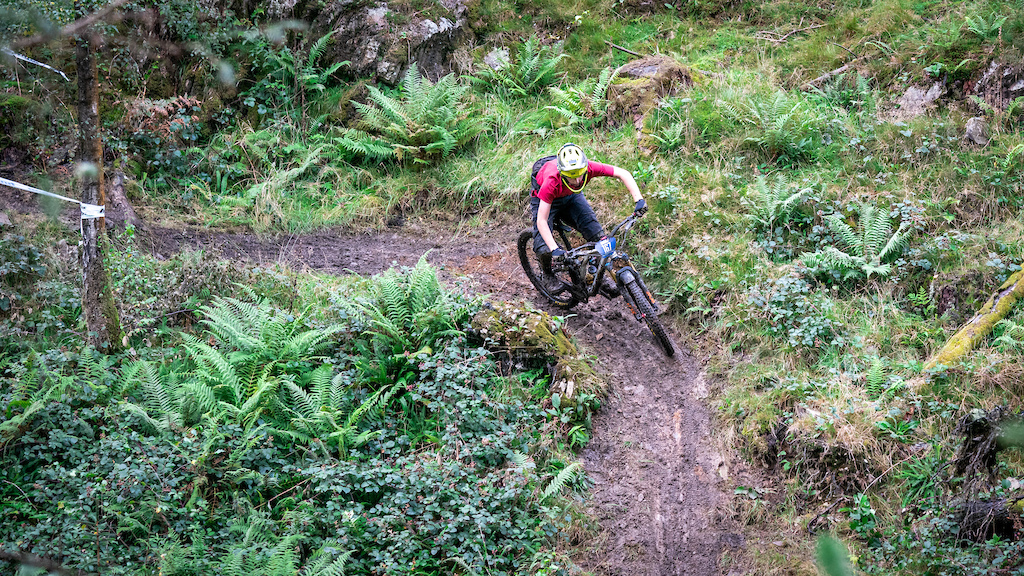 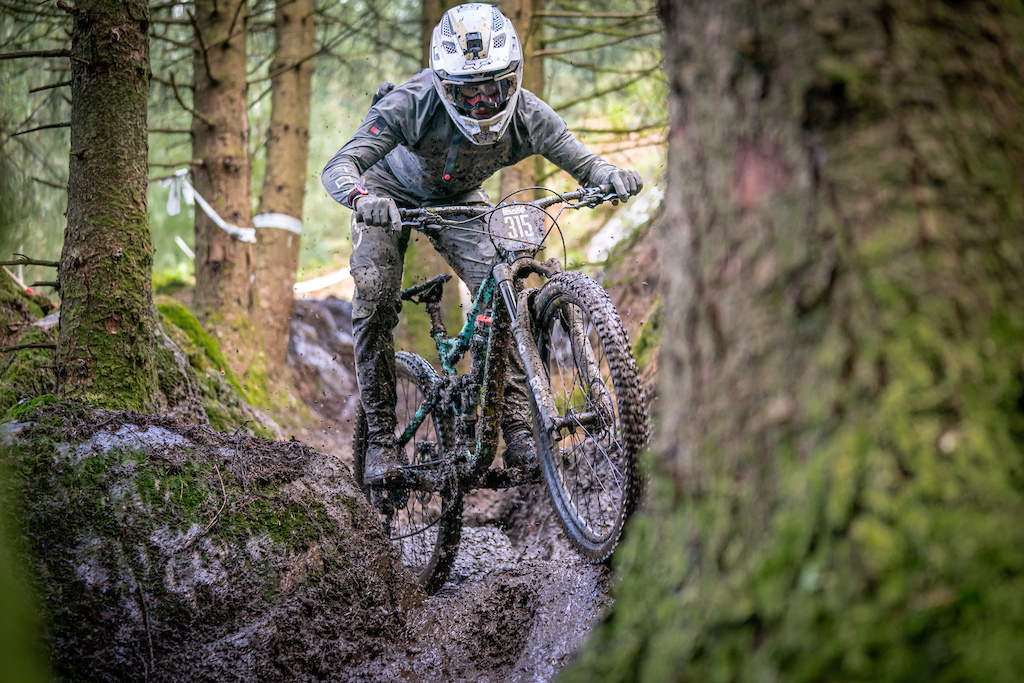 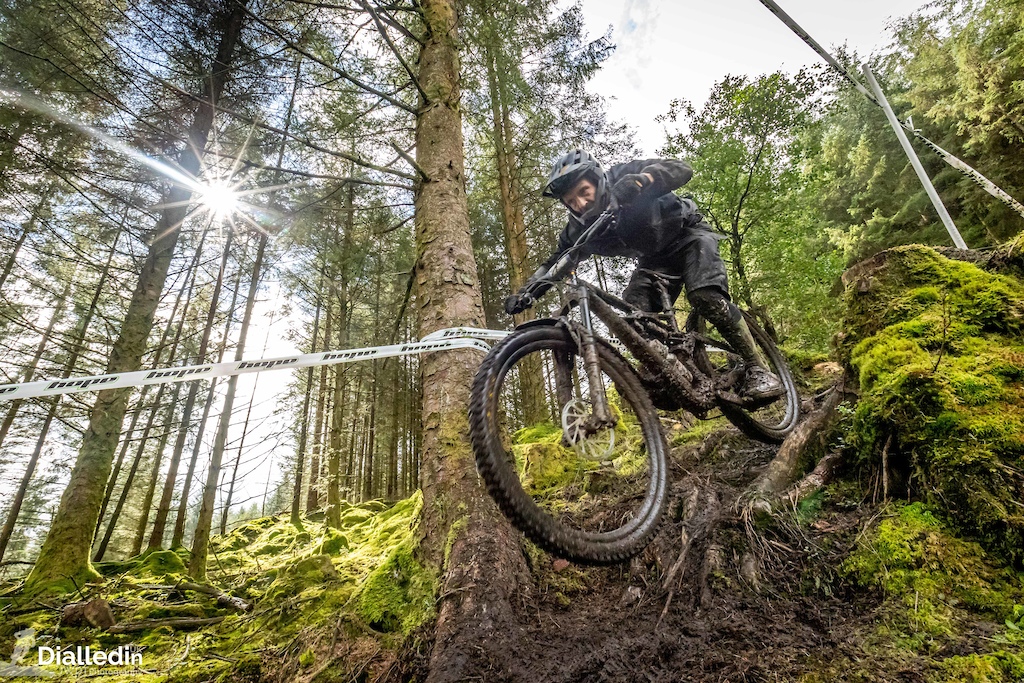 So with no podiums to prevent crowds gathering, what actually happened on the day. Who took the fastest time, did Ad Brayton defend his title? Keep reading to find out. 427 riders raced on the day.

So firstly to the men, over the seven stages the fastest man on the day was Reece Langhorn (30-39) in a staggering 13:09.02, next fastest was Ad Brayton (30-39) in 13:23.94 and third fastest and racing in vets for the first time was Ian Austermuhle in 13:29.29. None of these guys had raced since the last half of 2019, except Ad who had completed a downhill race at Hamsterley in January 2020. Literally 20 seconds separated these guys across the 7 stages. This was an outstanding battle for the fastest time. Ian Austermuhle absolutely destroyed the vets category (he says he's not 40 yet), which has always and always will remain a highly tough and competitive field. Looking at these top finishers, it was clearly a race for the more experienced racers. Honourable mentions should also go to Rob Young (30-39) in 13:34.27 and Alex Storr (U21) in 13:49.79. Baring in mind none of these guys had raced enduro in a year, that some some battle! I'd really love to mention all the other riders who got to the podiums this year, but to have a look at the full results please head over to roots and rain or Sportident 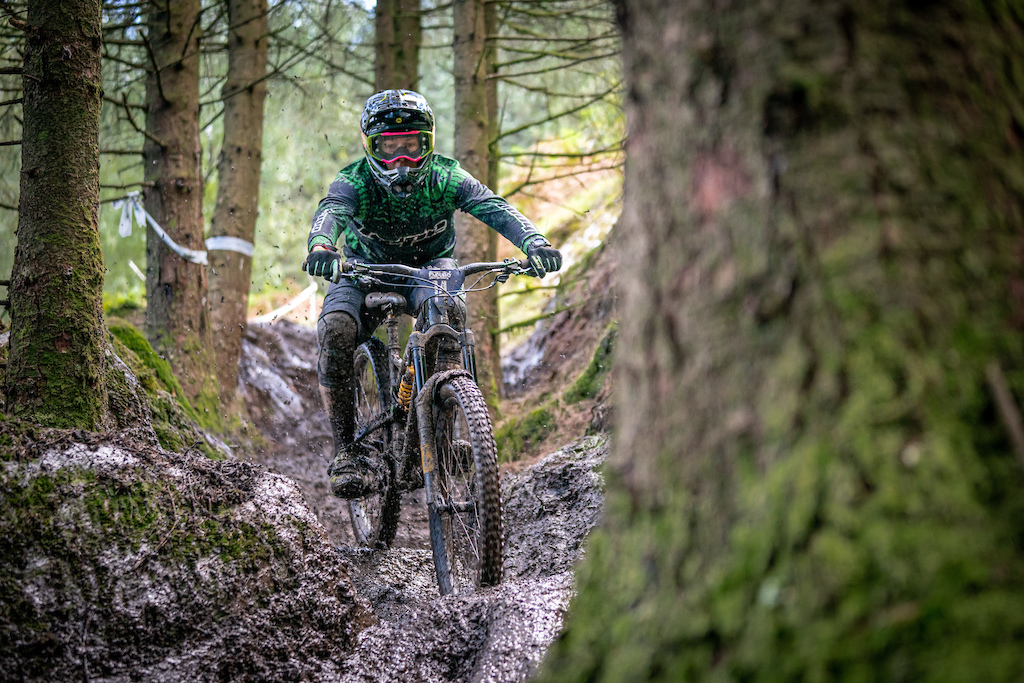 Ian Austermuhle (Vets) took the third fastest time of the day, winning Vets and on a new bike. Some lad!
The women's race was also an incredibly hard fought battle. With 22 women racing over the weekend the fastest of the day went to Polly Henderson (U21) in 18:07.41. Polly has an utterly mesmerising track record in the enduro racing scene, rarely has she never stood on the podium and has come 2nd and 3rd on the world stage during the EWS in 2019. But, hot on Polly's tail was young Leah Tulloch (U16) in 18:26.63, she's been racing barely 3 years and already she's pushing for top spots. She came first in her category by some margin, but looking at young Katy's (U16) stage times, Katy may have run in to trouble on stage 2 where she had to stop for a rest after crashing and hurting her finger. Katy was the youngest to race this weekend and it was her first proper enduro, having competed in the kids race at Kirroughtree and the Hopetech Women's Event in 2019. Third fastest of the day in the women's race went to Jess Stone (21-34) in 19:53.58. Again a very hard fought battle amongst the women, and another honourable mention to Phoebe Gale (U21) and Maxine Filby (35+), less than 5 minutes separated the top fastest women across the 7 stages, no races for any of you in near enough a year and in some of the conditions at Graythwaite ever. With talent like this, the future of women in the enduro scene looks to be very solid. Kudos! 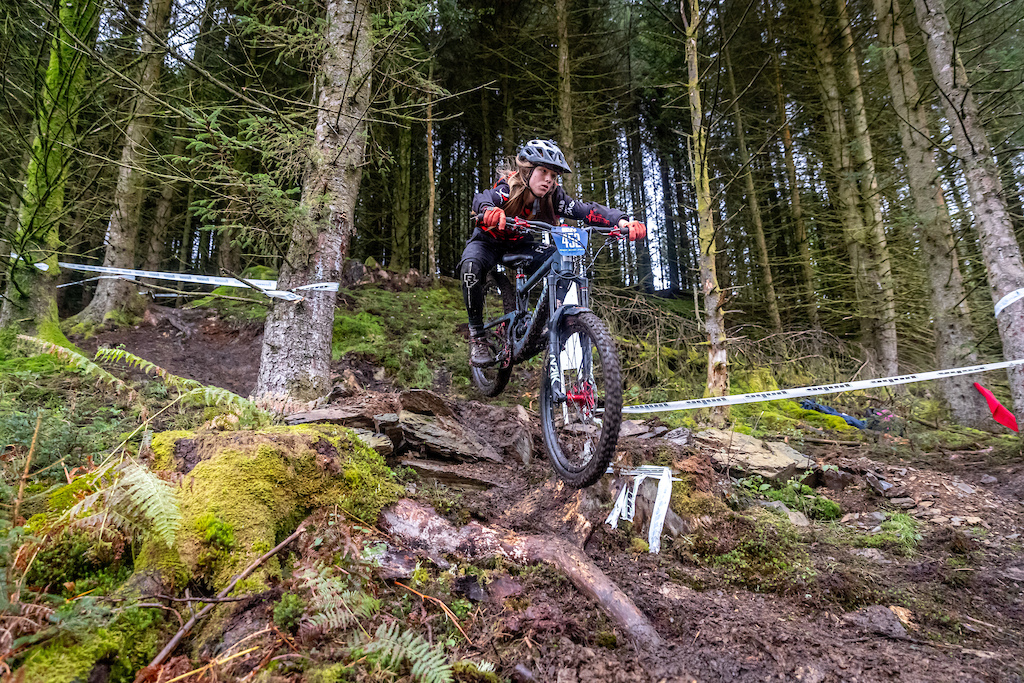 Leah Tulloch fast coming up the ranks in the women's racing scene
If you want to keep up to date with plans for 2021 then please continue to monitor the PMBA Facebook pages. You'll also find more information on their website, so keep checking back here. Nothing is set in stone for the future of the national race scene, these are very strange times. With many races usually happening in Forestry lands, all eyes will be on them to make some firm decisions about allowing races to go ahead. I spoke to Kev immediately after the event, at the moment there is too much uncertainty, but he will likely confirm the 2021 plans in February/March. However, he has plans, backup plans and backup plans of the back up plans to ensure you can race as much as this situation allows.

Until then, keep riding, keep training and keep safe! 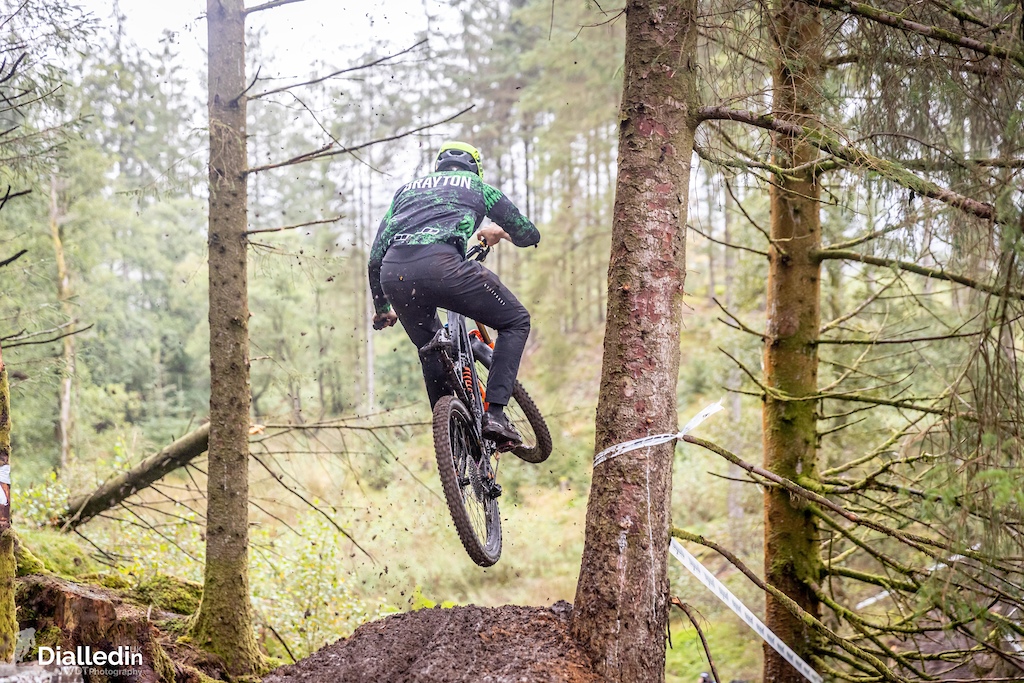 wildebeest5 (Sep 10, 2020 at 13:12)
Well done Kev and the team for organising such a great event, in such strange circumstances... was great to see so many happy faces, all in the woods together. Top job!

DialledinUK-race-photography (Sep 10, 2020 at 0:37)
Please note broken images courtesy of the editors!! Tried emailing them to sort out without any success!!

Please enjoy all the same.