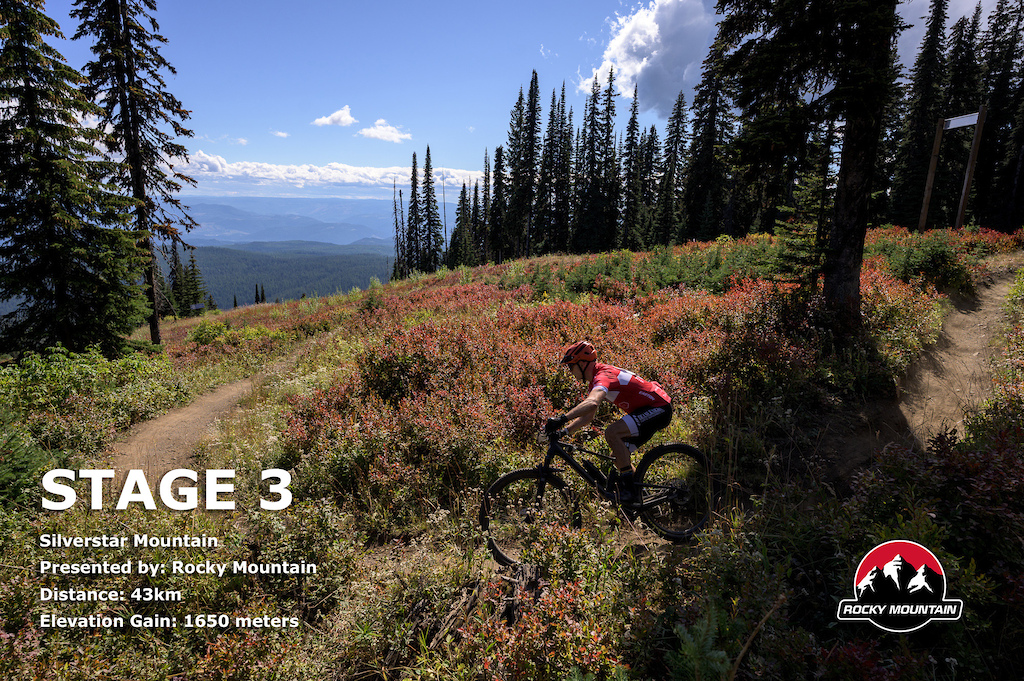 BC Bike Race aims to deliver the “Ultimate Singletrack Experience” and, on Stage 3 at SilverStar Mountain Resort, it entered into epic territory. That’s no hyperbole. The day’s racing took place on Beowulf, the resort’s massive, 43km loop named after the Old English epic poem.

Beowulf, the poem, tells its heroic tale over 3,182 alliterative lines. On Stage 3, riders wrote their own epic tale over the course of what felt like thousands of perfectly shaped corners as they descended from the sub-alpine into dry Okanagan dirt and then, finally, a magical pocket of loamy dirt and massive cedars with deep coastal vibes.

Any proper epic must include a struggle and the Beowulf’s bottomless descent eventually did end. From there, rider’s started counting the switchbacks to get back out. The day’s elevation change on the day, 1,650 meters descending and another 1,650 of elevation gain, adds up to a suspiciously close total to the Germanic epic. Symmetry? Coincidence? Fate? Or an ominous sign? That all depends how the legs and lungs are feeling after three days of racing. For some, it foretold an epic battle. For others, a climb to glory. 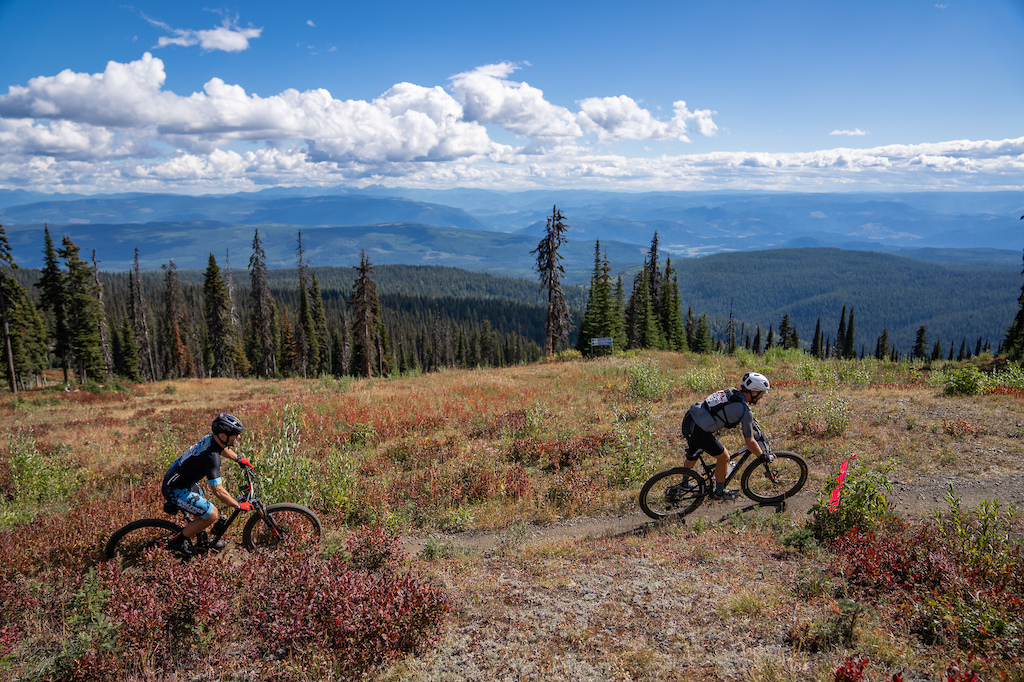 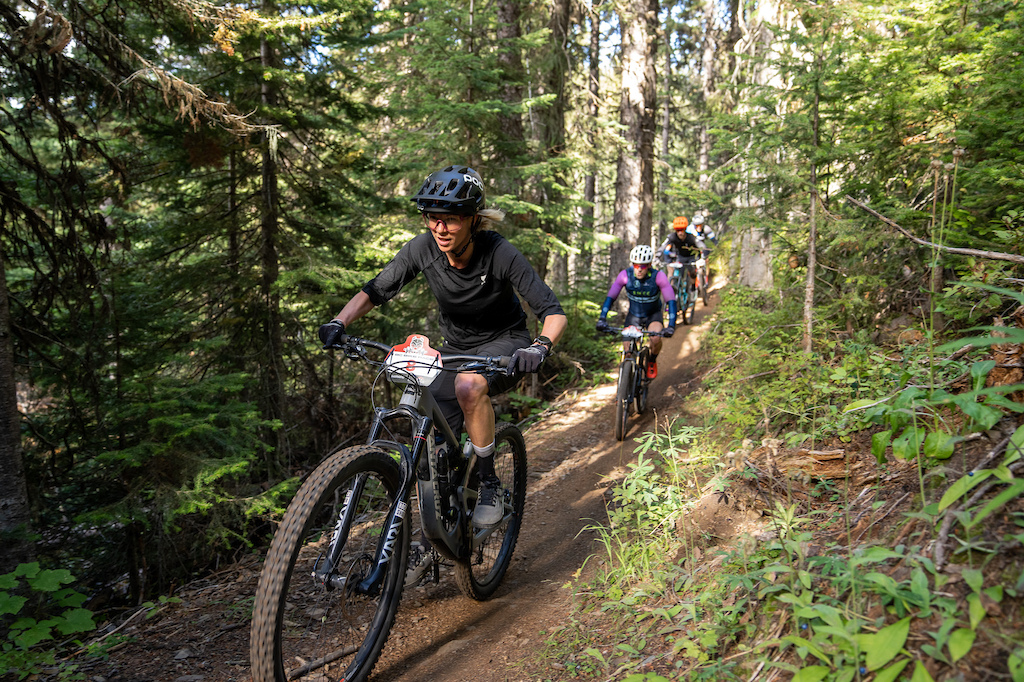 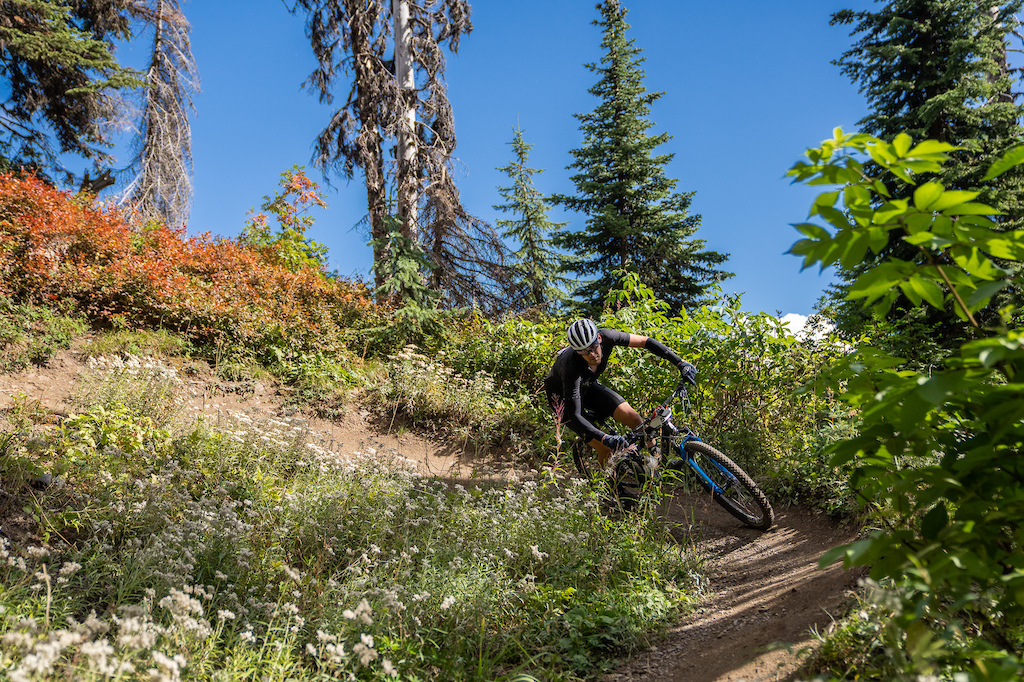 Perfect corners were the name of the game today.
Disera conquers Beowulf

Peter Disera was one rider rising to the challenge. After winning Stage 1 in Kelowna, the Canadian National Champion dropped down the standings in Salmon Arm on Stage 2. Today, he was back on form.

“I went out way too hard on Stage 1, but I felt good. I just wanted to take the win and lead off the bat,” Disera said in SilverStar. “I really paid for that on Stage 2, but we made it through.”

Stage racing is a dynamic beast, though. Disera battled through the leaders on the climb out of Beowulf’s depths to take today’s stage win.

“Today was just having fun, I wasn’t expecting to take the stage win. The pressure’s off, because I lost so much time yesterday,” Disera said after reeling in the day’s early antagonists, Geoff Kabush and Carter Nieuwesteeg. 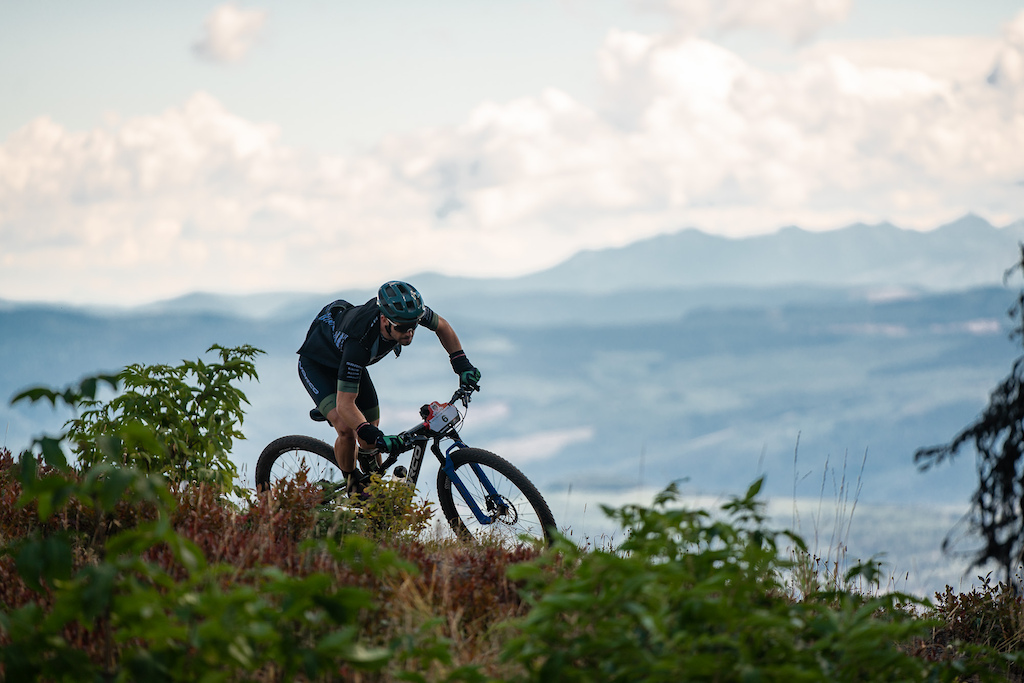 Disera, only one goal in sight. 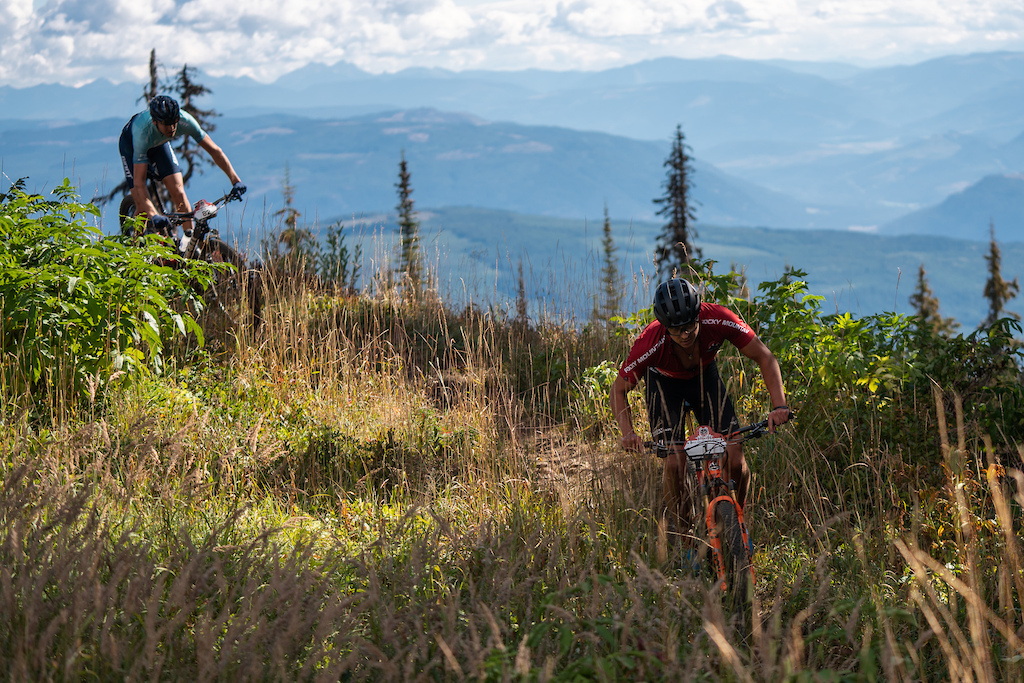 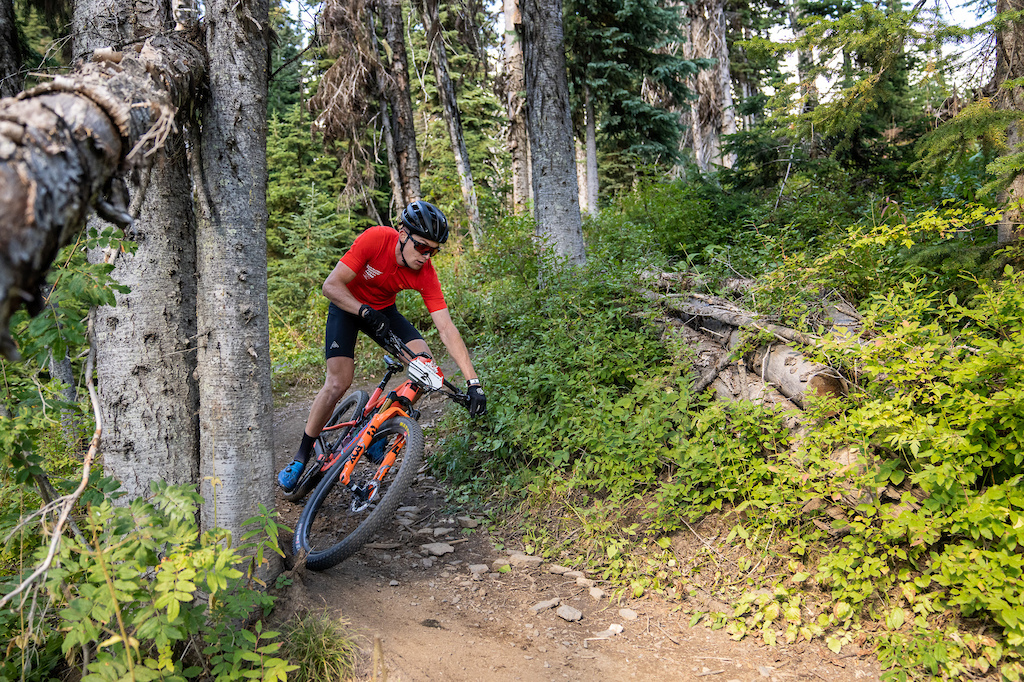 Carter Nieuwesteeg railing corners.
After seeing he’d moved back into third overall, Disera may be shifting his sights back towards the overall. But riding his first BC Bike Race is just as much about the experience.


To take the win, Disera still has to get through U.S. rider Luke Vrouwenvelder, fourth in SilverStar, and Carter Nieuwesteeg. The Fernie local finished second on Stage 3, less than a minute off the win, and now sits in the same position in the overall standings.

“I had a rough day yesterday. I bonked in the last 5km and Geoff went whizzing by me,” Nieuwesteeg said after the finish in SilveStar. Lesson learned. The Fernie local went into the descent locked to Kabush’s wheel.


As the miles add up, Nieuwesteeg is picking up steam. The “Fernie Freight Train” rolls into BC Bike Race hot off another stage race win at Singletrack 6, putting him at 10 days of racing in the last 2.5 weeks already. How are the legs feeling halfway into BCBR?

“Surprisingly pretty good. Kieth [Wilson] really kicked my ass this summer to be ready for this. I’m just dieseling through.” 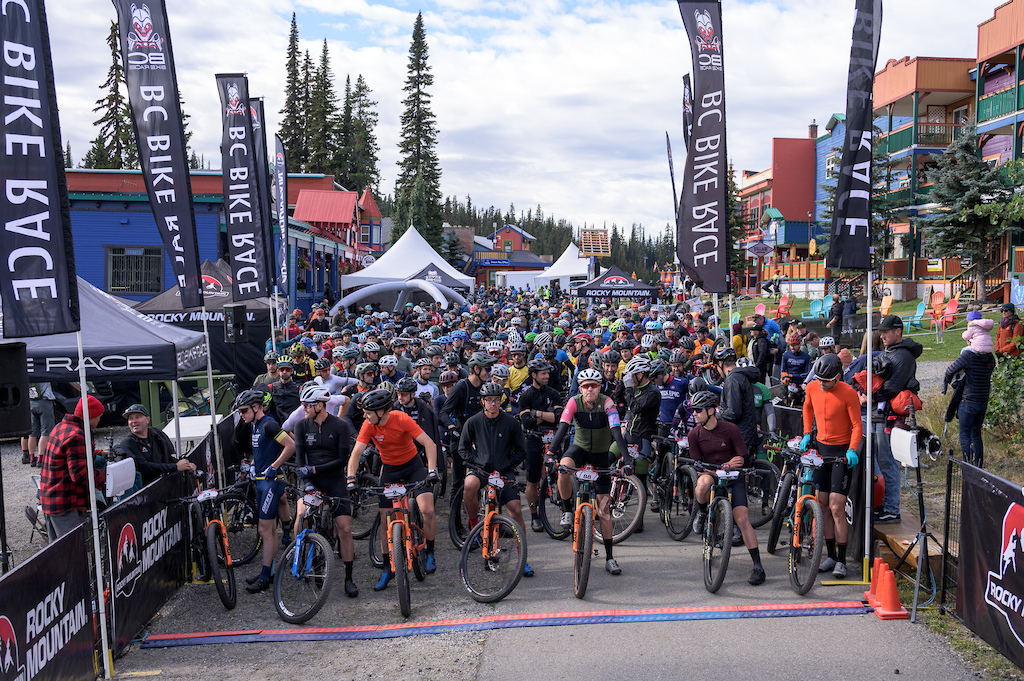 The calm before the storm.
Kaysee Armstrong charges onto SilverStar podium

Another rider building momentum at SilverStar was Knoxville, Tennessee’s Kaysee Armstrong. The Liv rider is working her way back into racing after a knee surgery that disrupted her season. On Stage 3, Armstrong was charging on the descent.

“Today was great! I finally felt more normal on the descents. I’m still lacking fitness since the surgery, but I knew today was my opportunity. I just went ham off the start until we got to the descent and just tried to get by as many people as I could. It was so good!” 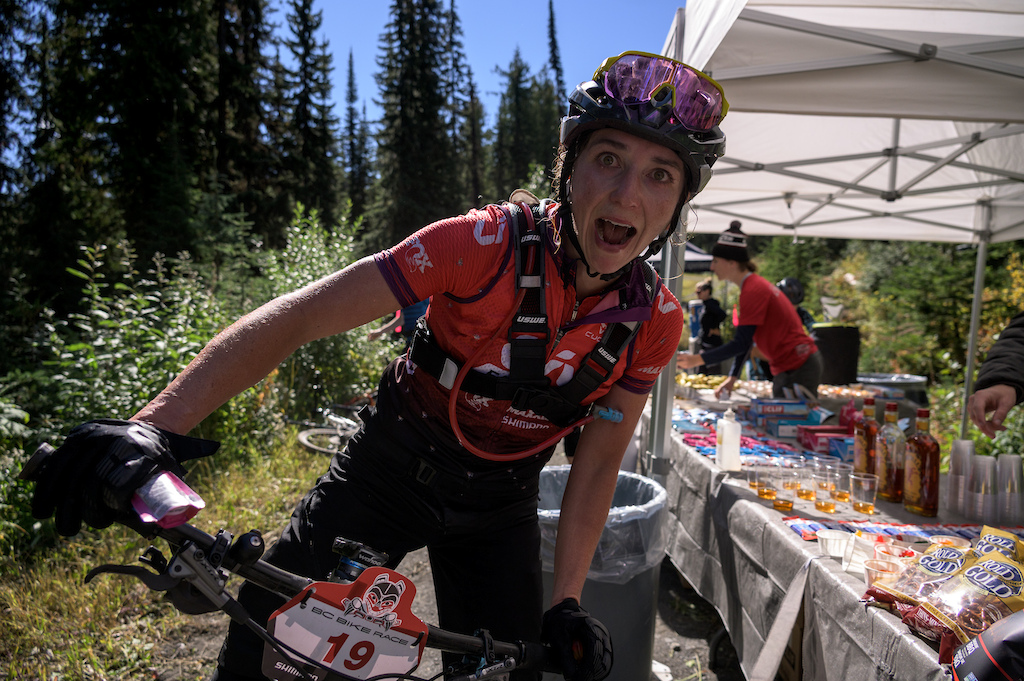 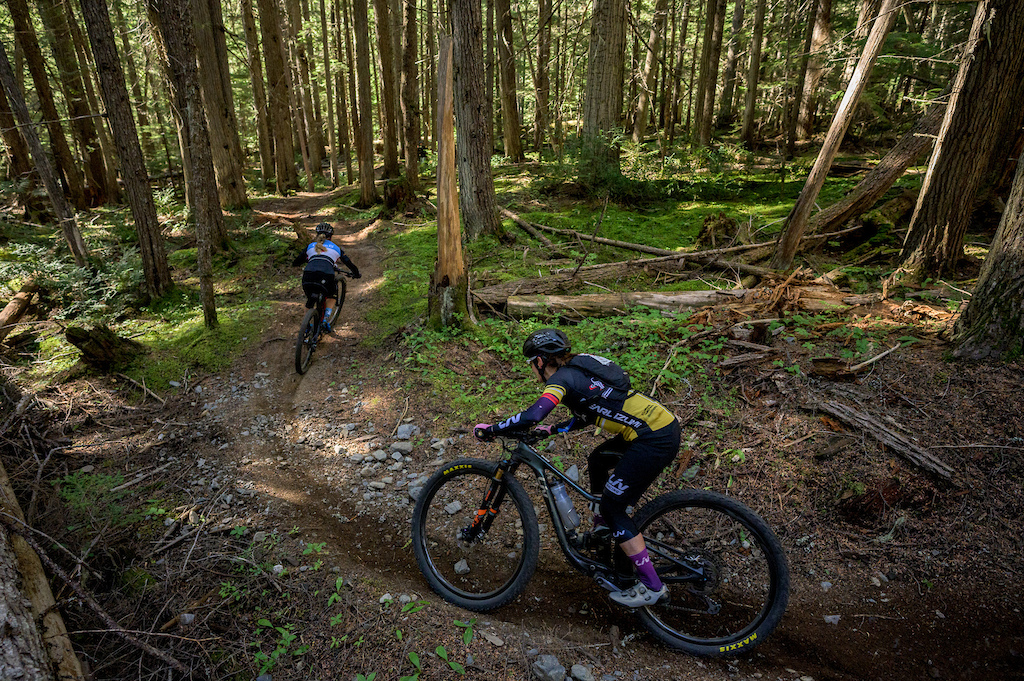 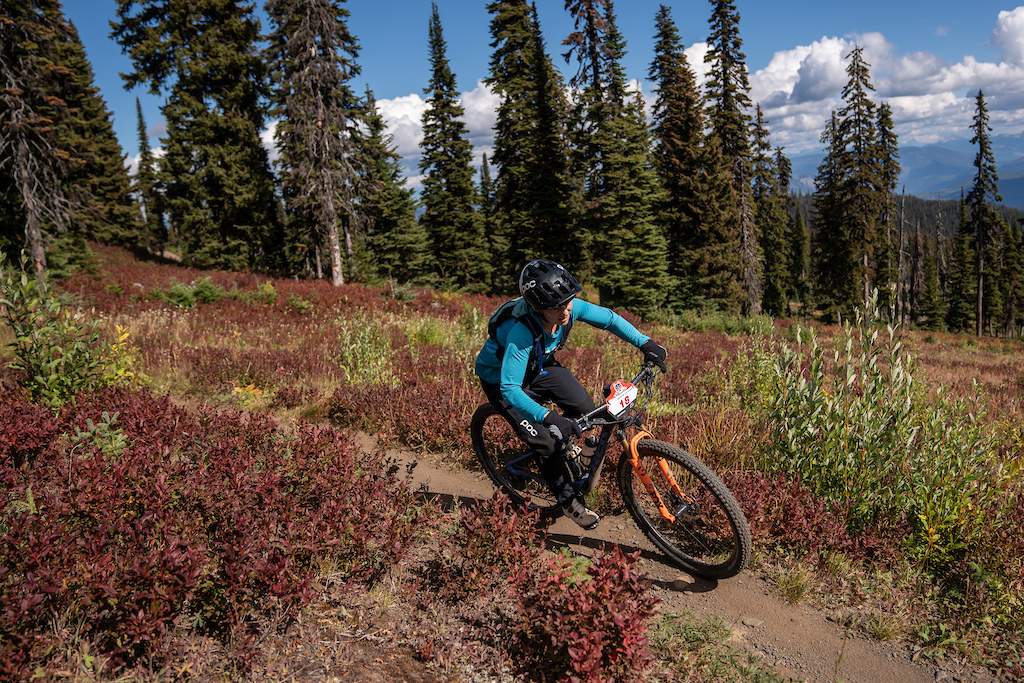 Amity Rockwell.
The strategy paid off. While the untouchable Sandra Walter and Catharine Pendrel finished 1-2 again on Stage 3, Armstrong was able to hold her position on the long climb out of Beowulf back to SilverStar Village. It’s her first podium this week, but brings her in touch with the tight group of racers fighting for the final podium position.

“I’m racing to get back in shape, so maybe by the last day I’ll be super fit! Maybe I’ll just keep on the podium all week.”

If anyone can fight back into the race, it’s Armstrong. The Tennessee rider already has five appearances, including one year volunteering and two BCBR overall podiums to her name and is stoked to be back to try for another. 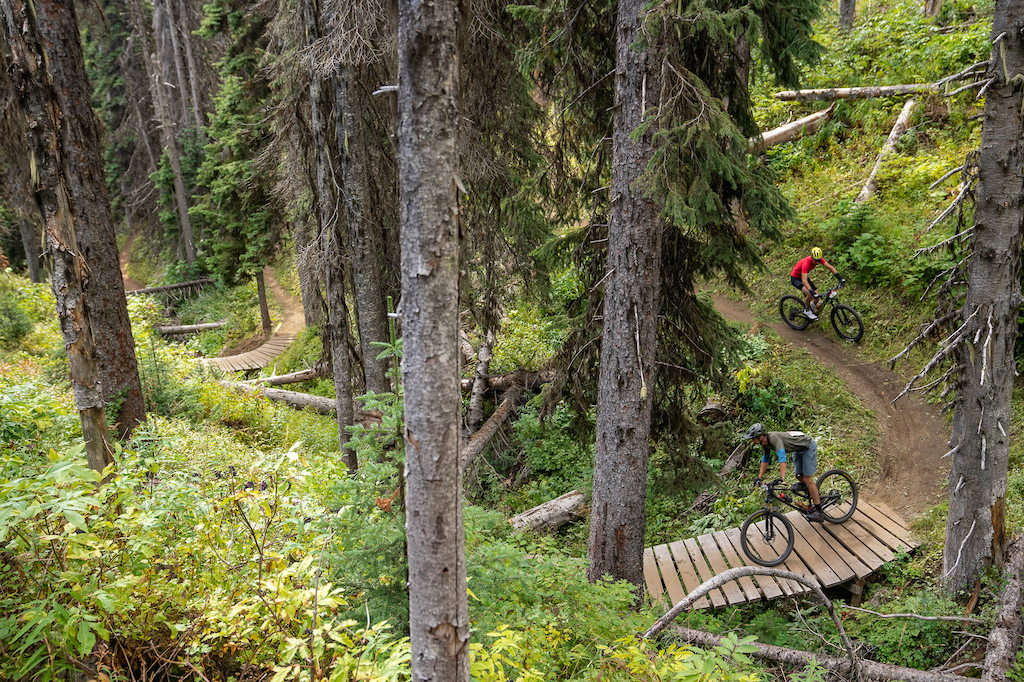 Good times on Snake Pit.
From Dubai to BC Bike Race

David Templeman is another rider making his return to BC Bike Race all the way from the U.K.. After racing on the coast in 2017, he’s enjoying the challenge of a new location.


While he hails from the U.K. originally, Templeman now resides in Dubai, where he’s a pilot for Emirates airline. While not a place you’d think of as ideal training grounds for a B.C. stage race, there are some unexpected parallels.

“There are mountains, it’s like Utah,” Templeman explains. “Kelowna’s a bit more like what I ride in Dubai. There’s actually quite a big scene there. Lots of trail building, which they’re very relaxed about.” 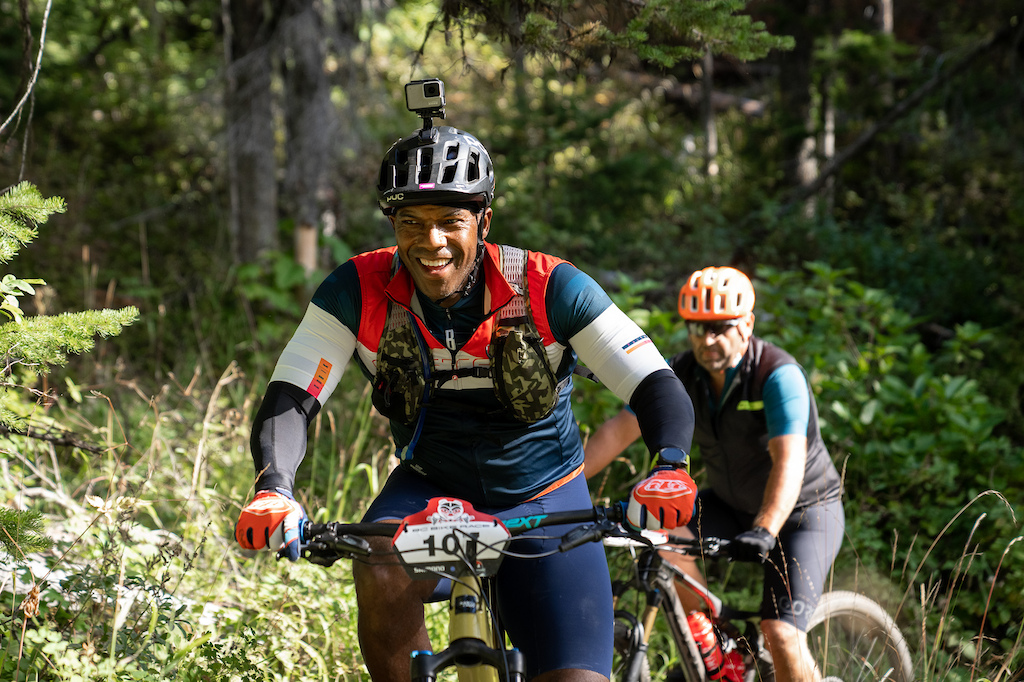 Not just the Media Team was out with GoPros. 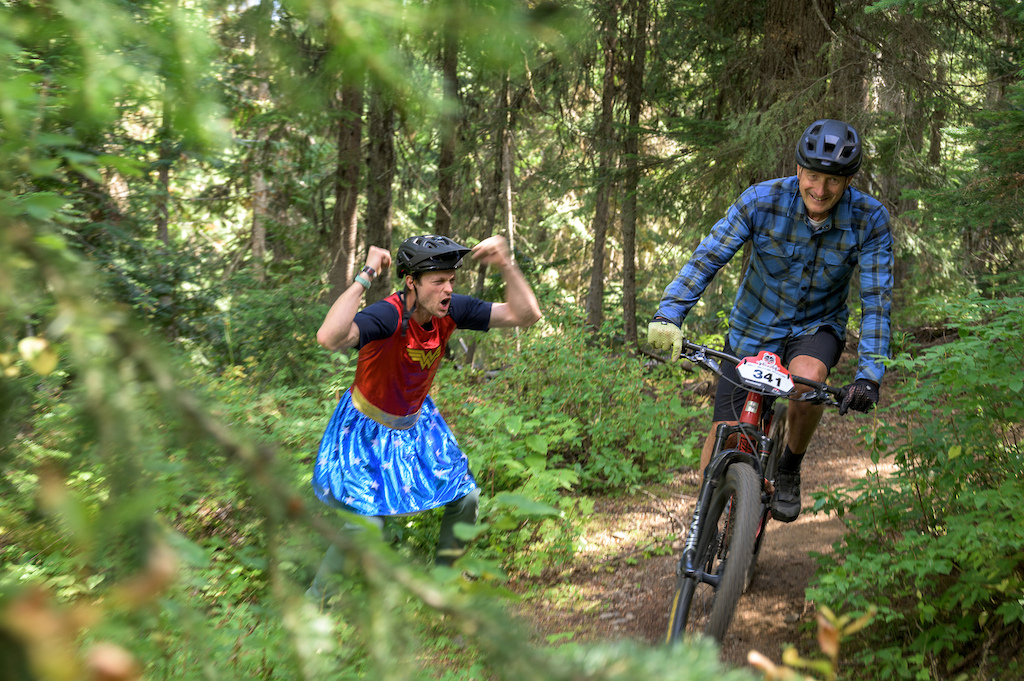 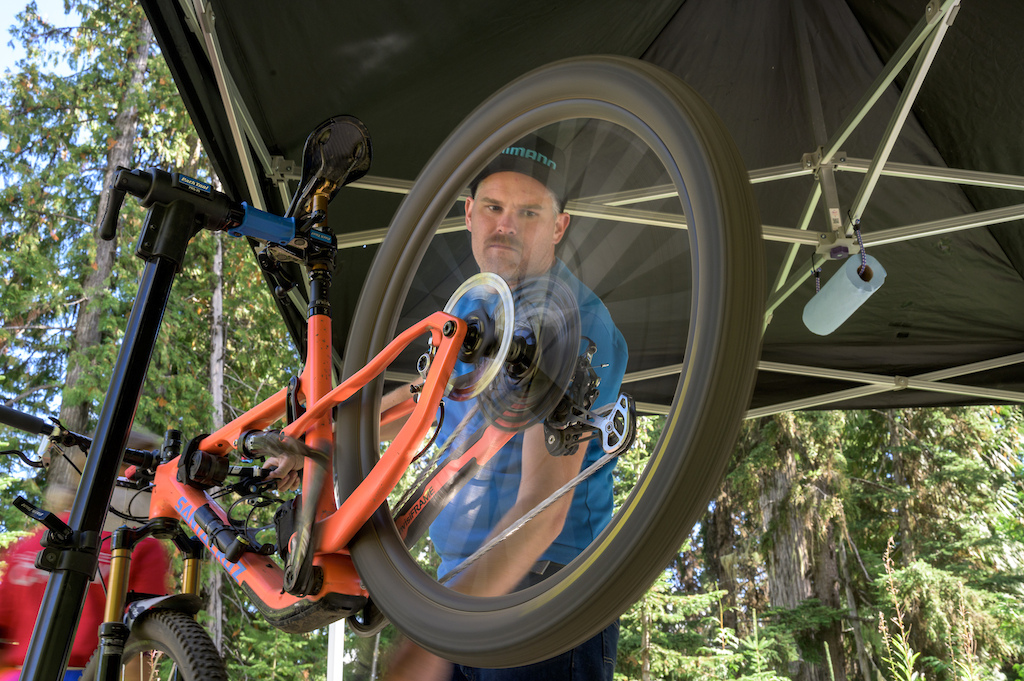 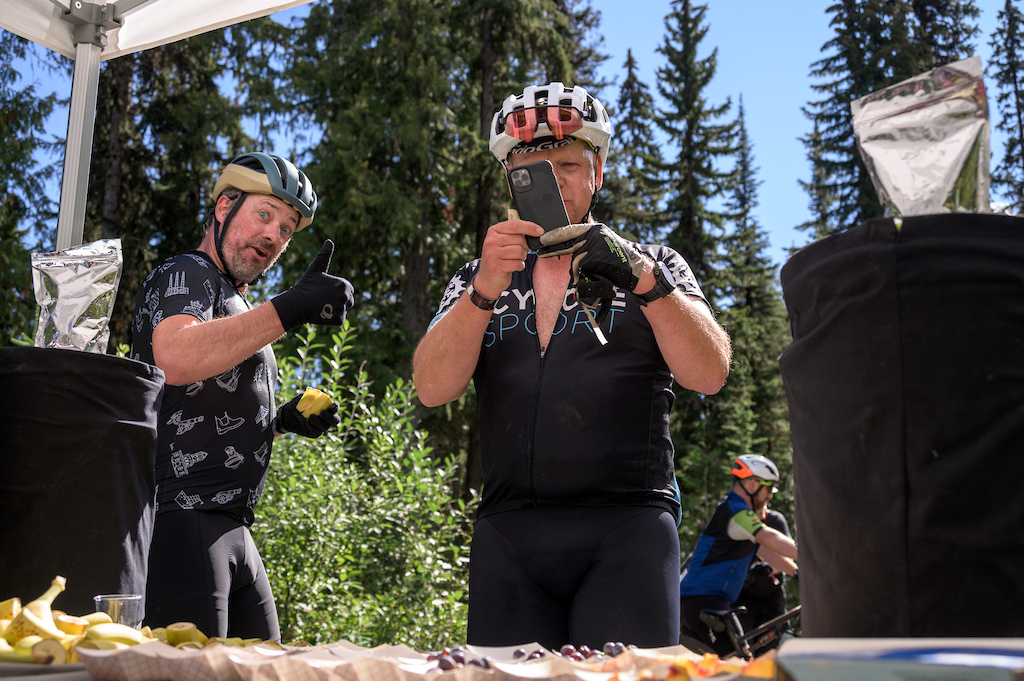 The selection at the Aid Station was worth a picture.


After riding today’s epic on Beowulf, riders will be back at it again tomorrow for Stage 4 with another 43 km of Okanagan singletrack. The second day in the Vernon area, this time in Coldstream, starts down in the valley, but doesn’t offer any reprieve. Another 1,760 meters of elevation gain carries racers up to the King Eddie plateau for stunning views of Kalamalka Lake and leading into a very different version of Vernon singletrack. In place of flow and speed, Stage 4 will be back to full-on B.C. gnar and tech. 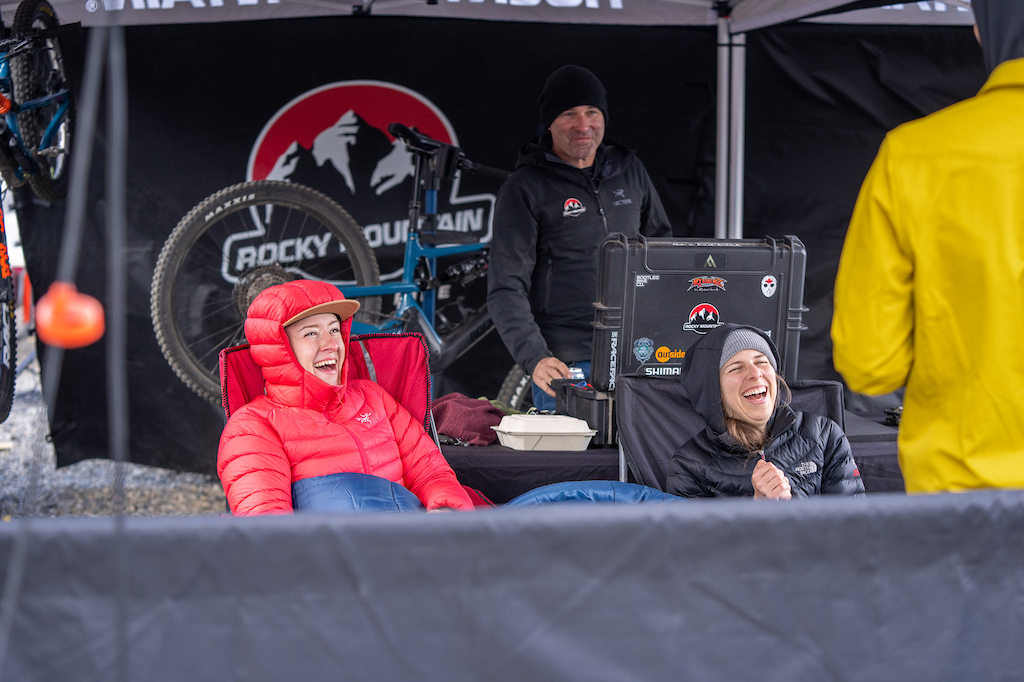 Looks like Rocky Mountain, sponsor of the day, enjoyed the day as well. 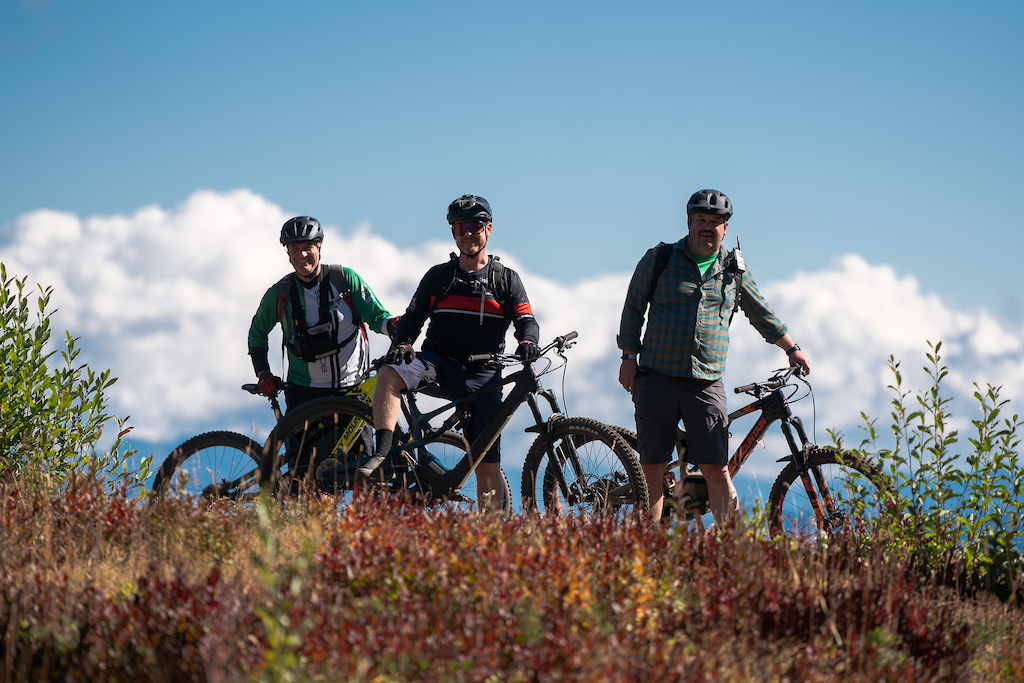 The BCBR Team is ready for another day. See you in Vernon.

I have my opinions