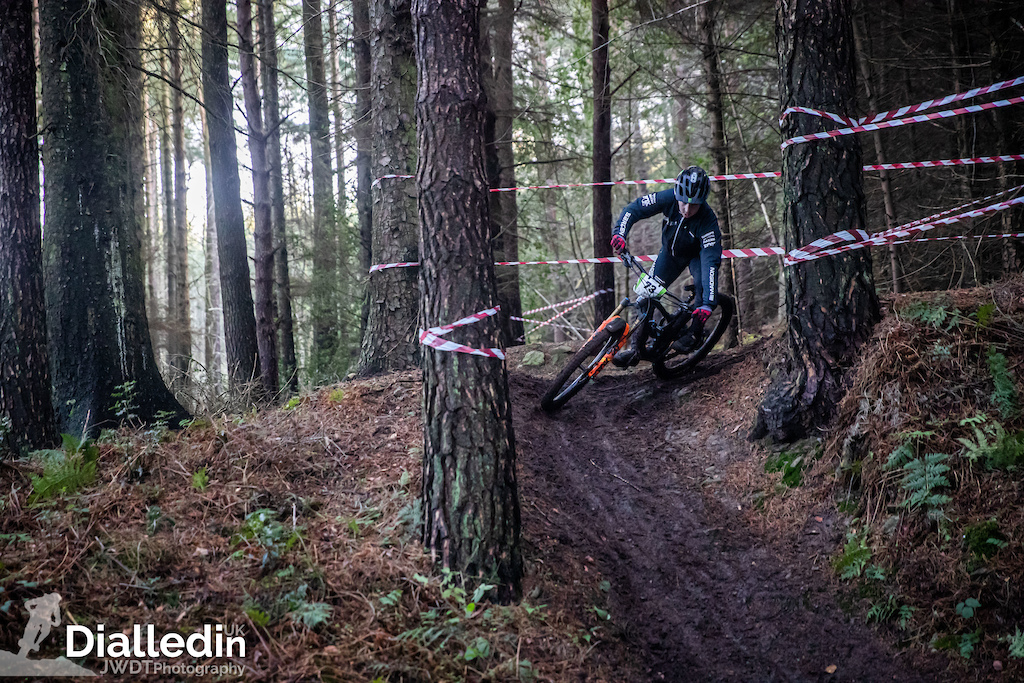 Danny Hart taking the win, but he was pushed hard

It has to be said, that in the UK the winter racing scene has gone very quiet of late. But tucked away in the North East of England the Northern Downhill, organiser Carl Davison always keeps his nerve with the winter conditions and puts on a superb series of races that attracts all levels of riders, from novices trying their hand at racing for the first time, to seasoned elite riders like Danny Hart, fresh from winning a UCI World Cup race at Snowshoe, West Virginia and current UK National Downhill Champ. That is the pure beauty of this series of races. You'd all expect Danny to win at events like this, but just one tiny mistake or mechanical, and he could be facing complete humiliation. This, in my opinion, shows guts!

Sunday saw the return of one of the most popular events at Hamsterley Forest, the Northern Downhill's Enduro, always reputed to be one of the most technical of the season. This isn't simply a downhill race, but enduro. 3 stages raced as fast as you can go from top to bottom of the bike park. Hamsterley doesn't offer the biggest of hills, or the longest of stages but what it lacks in these, it makes up in technical roots, rocks, drops and steeper chutes. 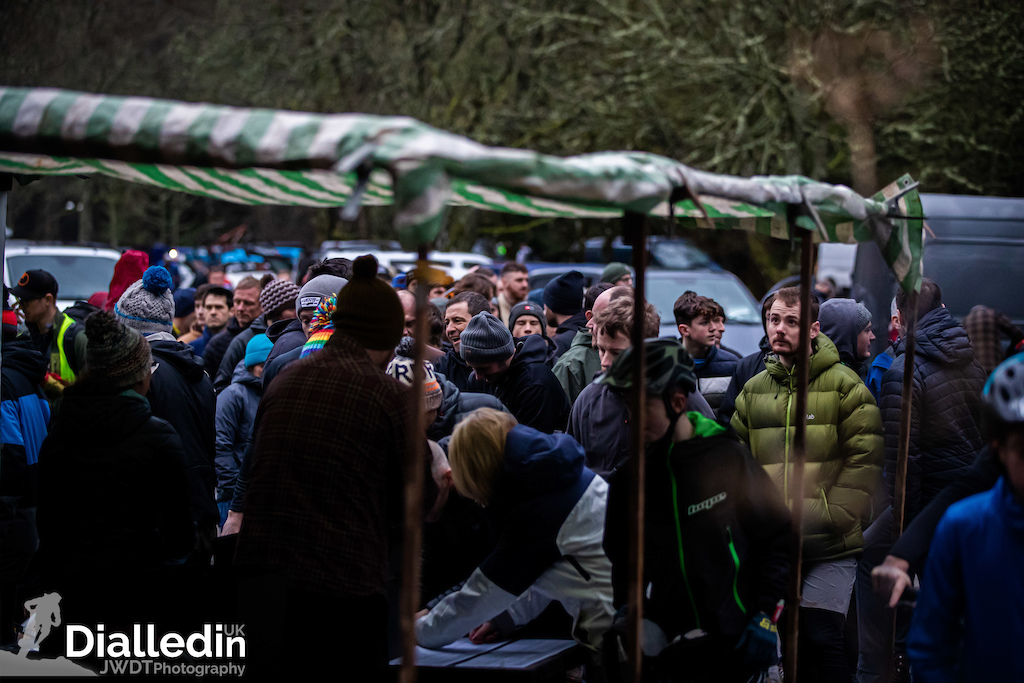 200 riders had signed on after a long and indulgent Christmas break
As is always the case with early on races in the calendar in the UK, the weather was playing havoc in the North East, with gale-force winds on the Saturday leading up to the race, the Forestry England had been urging the public to stay away, but this did not put off the 200 odd riders keeping a close eye on the forecast. On the day, the weather could not have been more perfect. Grey in the morning for practice, then come 12.15pm and the race start, there was beautiful winter sunshine. 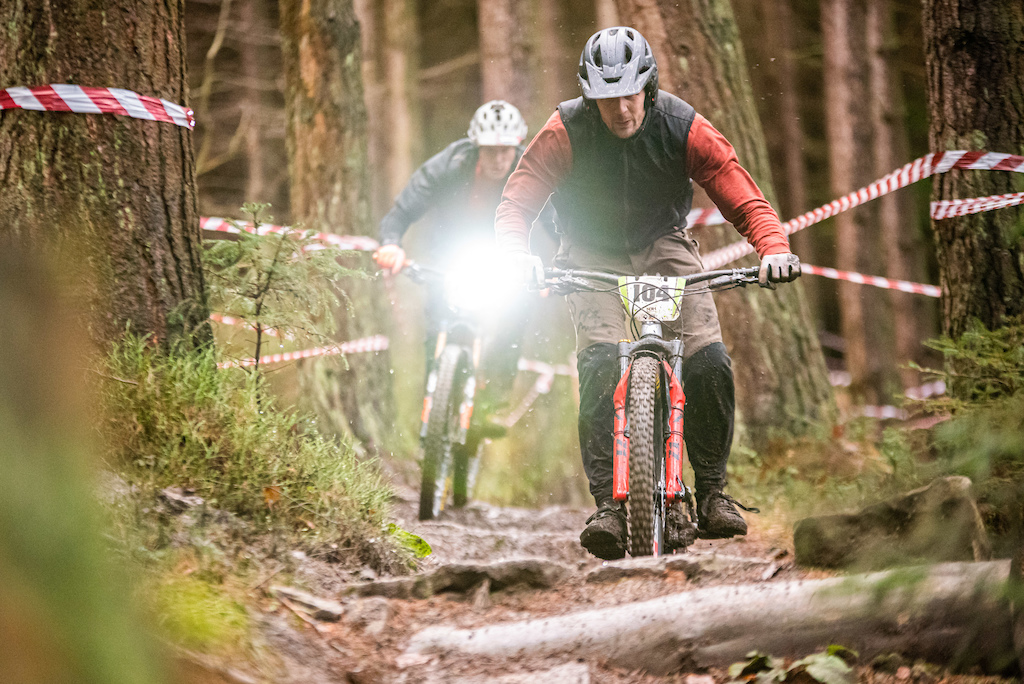 Low sun and dense trees made for some dark conditions. Photo Credit Andy Cole
These winter enduros have to follow a strict pattern due to the very short days. So riders get approximately 2.5 hours to practice in the morning, then the 3 stages opened at the same time to be raced in the afternoon, so all in all it's a short but action-packed day of practice and racing. 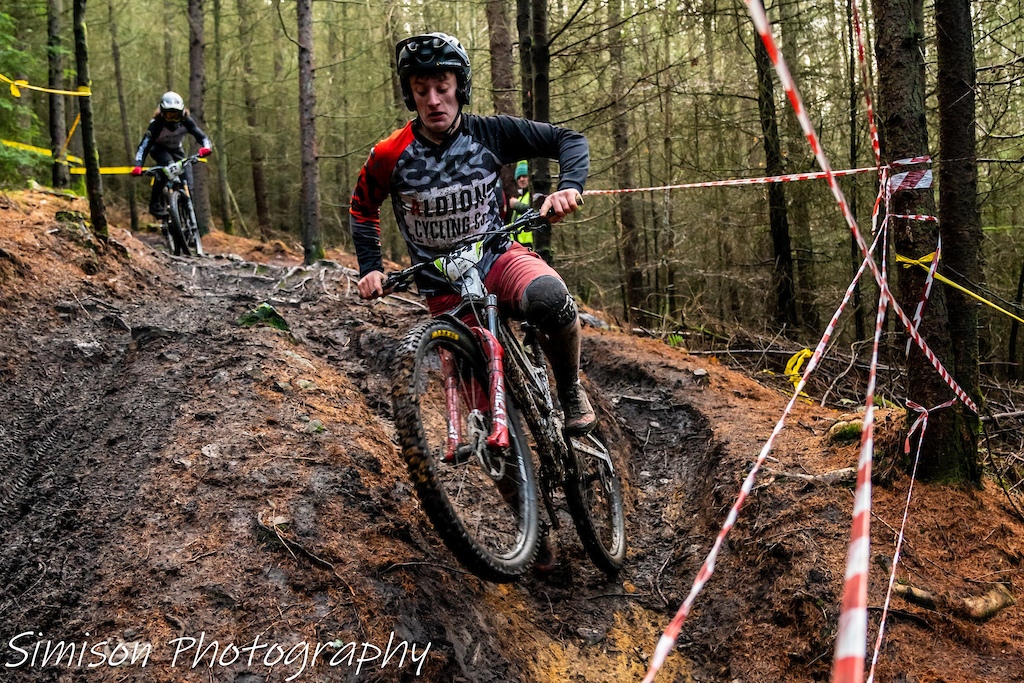 Gabe taking the win in his category. Photo James Simison
All 3 stages started off quite flat, but once you head further down the hill, it gets pretty damn rowdy. Stage 1 was trail centre's Section 13 into the NPS. Probably the longest stage with a cruel fire road sprint half way then into technical rocky, rooty slop. Stage 2, the shortest stage was also a rocky and rooty affair, ending just short of the fire road and a steep corner with large roots, if I was racing I'd have been relieved to miss that drop onto the fire road out. Finally, stage 3 was called "The Edge". A reasonably calm start, but once over the fire road, it becomes steeper, with drops, rocks, roots and the infamous wooden feature. 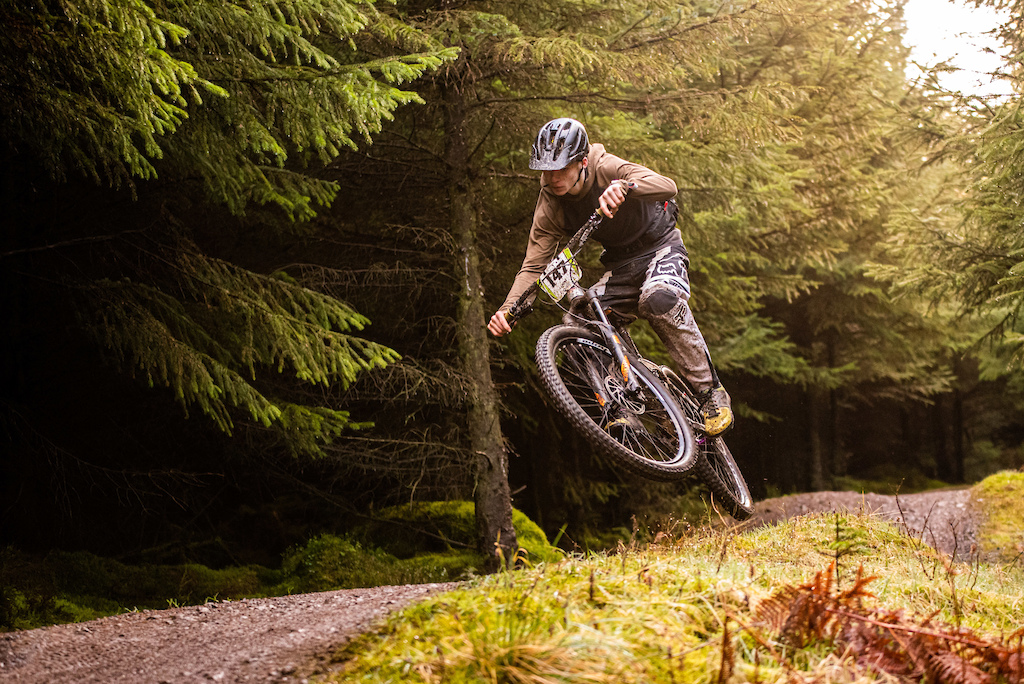 Keeping it low on Section 13. Photo Credit Andy Cole
So the fastest rider of the day went to Danny Hart (elite19-29) with a total time of 6:43.00, second fastest and only 2.42 seconds behind Danny was Carl Simpson (30-39) who also won his category and third fastest was Chris Philogene (19-29) just 6.96 seconds behind. Danny took the win in 2 out of the 3 stages, he came in at 5th on stage 1. A massive shout out to 3 of the veterans (40-49) who broke into the top 10 fastest of the day. Oliver McKenna, Andrew Devine and Zac Hubery, total kudos to those three. Also, a big shout out to Gabe Seabridge (14-1

winning his category, but also making the top 10 fastest of the day, and racing Hamsterley for the first time. 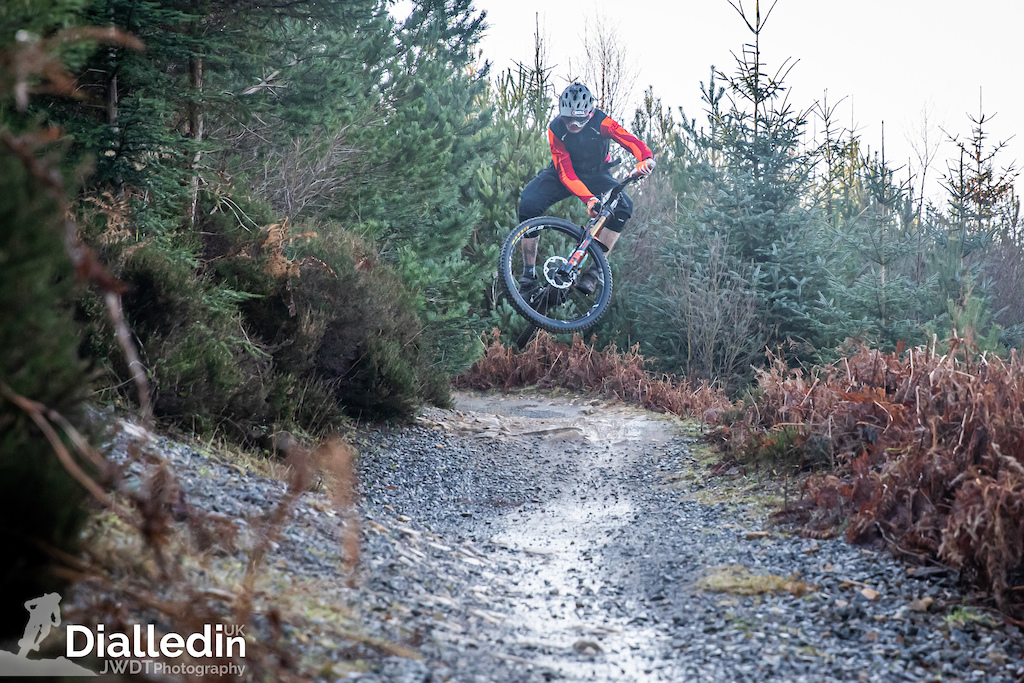 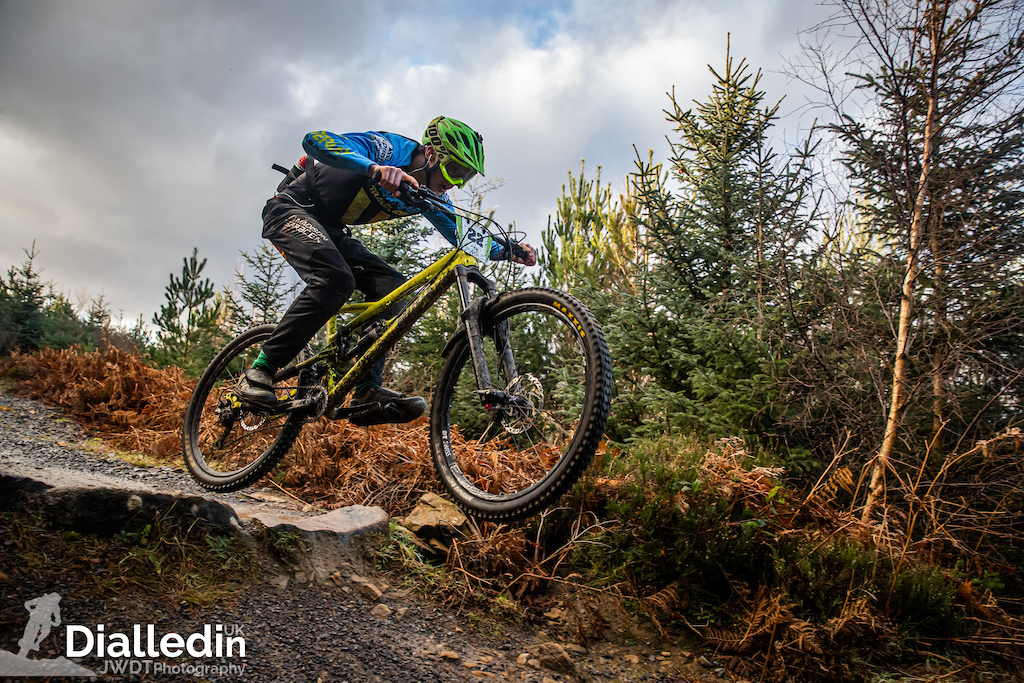 Joe giving it the beans on stage 1
Next up the women's race proved to be very interesting. Only 7 women raced on the day and their categories were split into U30 and 30+ women. The overall fastest woman (girl) was Hollie Vayro in 8:48.35. This was a commanding lead over her next rival Jade Limpus who finished 1:05.52 behind and 3rd place went to Amber Hull 1:42.08 behind. Emilia Wood took 4th in the U30. Also of note, in the 30+ category it was Hollie's mum Sarah who took the win in 10:41.00, followed by Clair Fowler and Marianne Williams. Hollie at 13 years of age is certainly one to watch out for in the future, having also been sponsored by Flow MTB Apparel in 2020. It was also great to see Jade come back to racing and take the 2nd fastest woman of the day in some tough conditions for a returning racer. It's a tough one to see only 7 women racing out of 182 finishers on the day. With great work from Hopetech Women and the Gowaan Girls (Martha Gill and Bex Baraona) promoting this sport to women, it would be great to see more racing. Comment below how you see women and racing enduro in 2020. How can it be promoted and brought on? 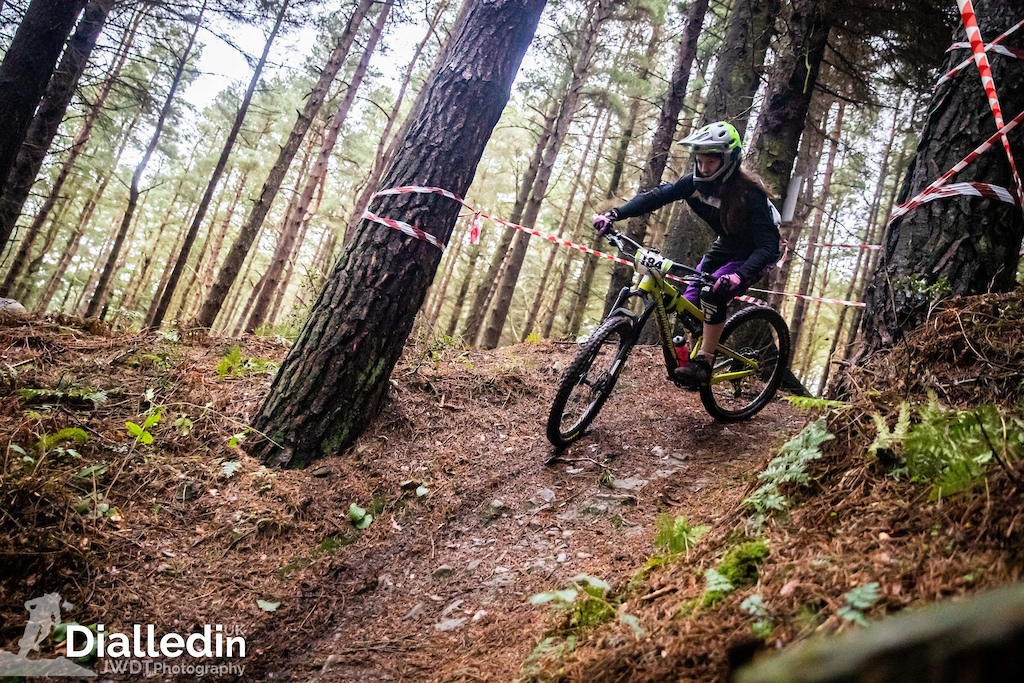 Hollie is definitely one to watch for in 2020
For a full rundown of the results head over to roots and rain here. To find more information on the Northern Downhill race calendar head over to their website or the official Facebook pages. The next race in the calendar is Ae Forest on 9th February. That race is a TT, so full-face helmets are mandatory, and these races are not to be missed. Similar to a DH race, but any bike can be used (Obviously leave the road bikes at home), 2 race runs and fastest time wins. 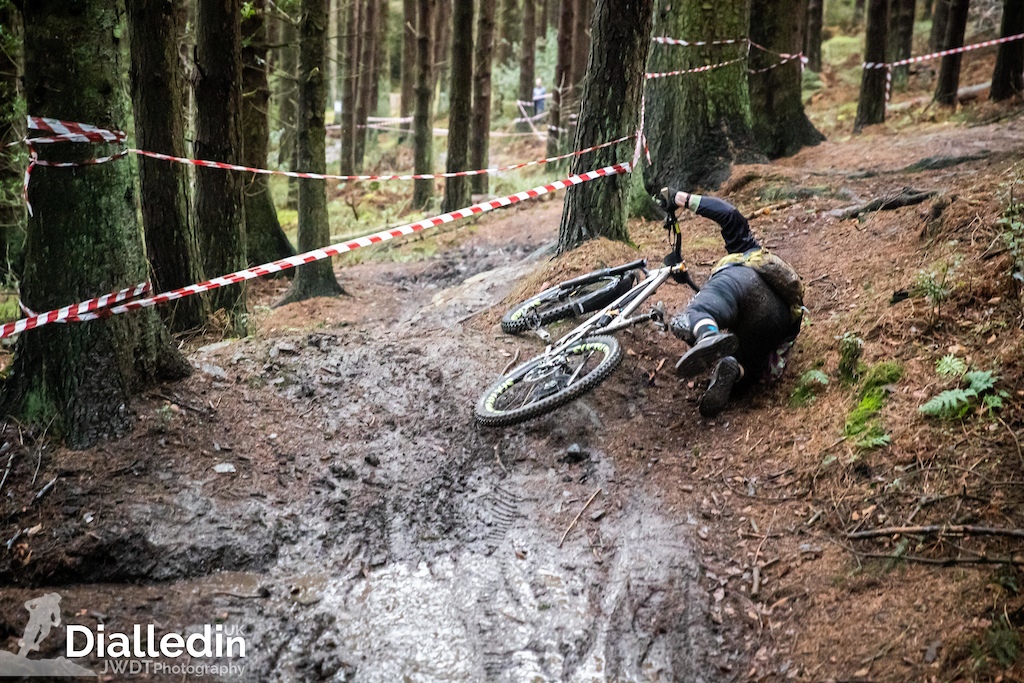 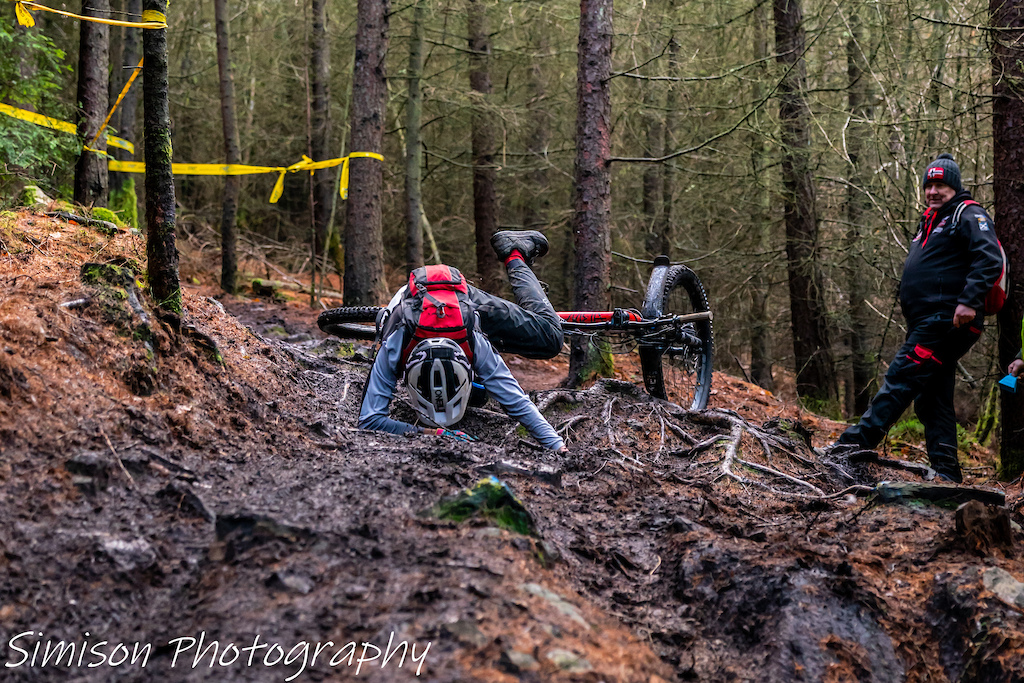 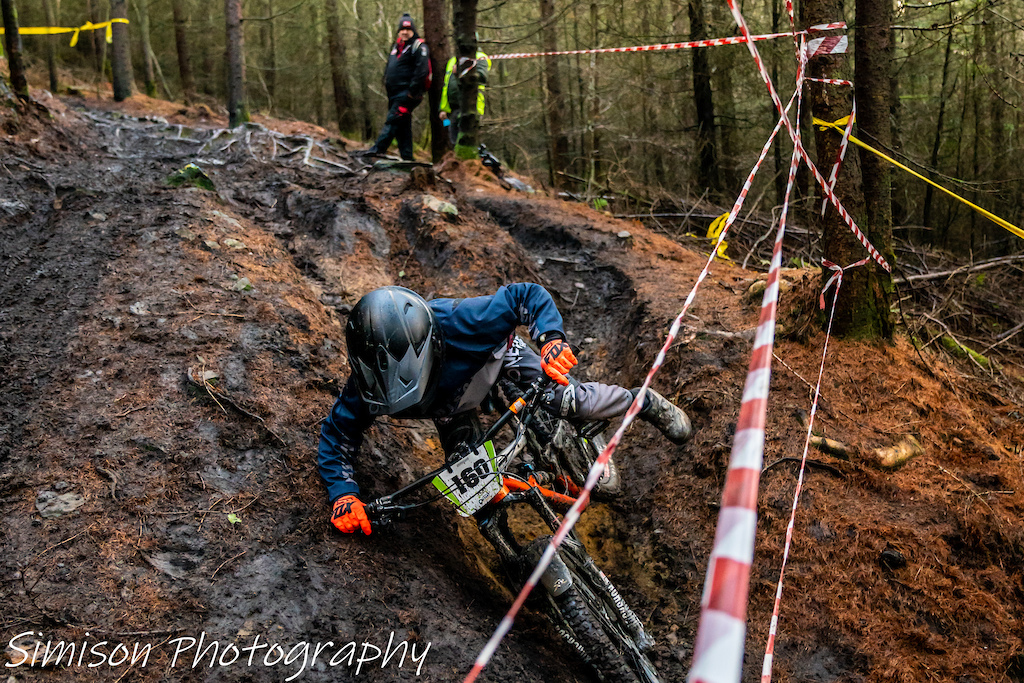 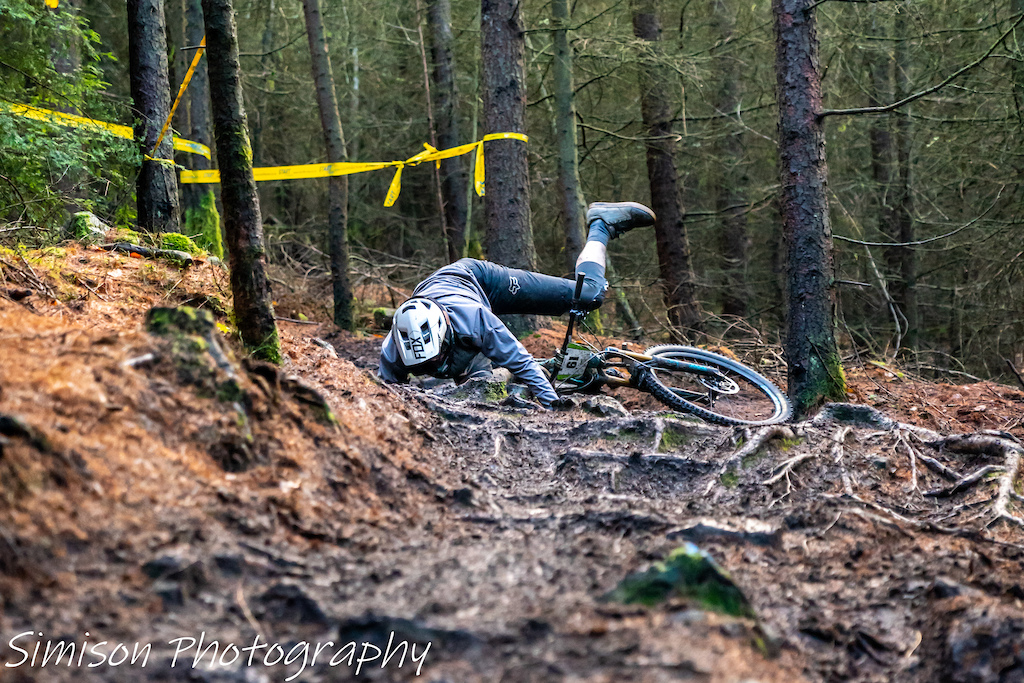 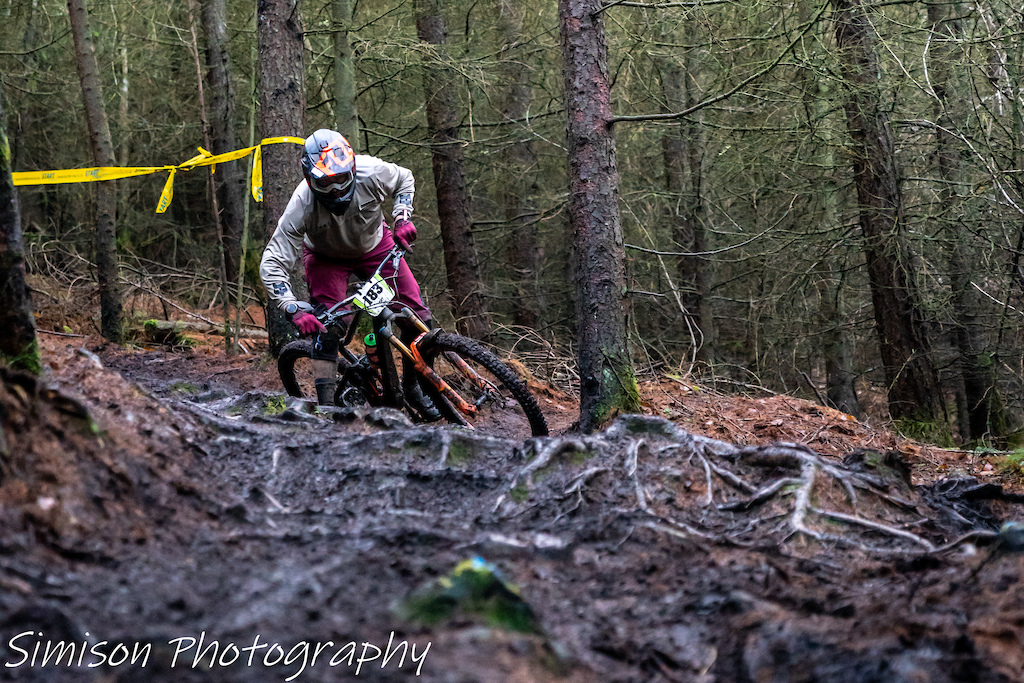 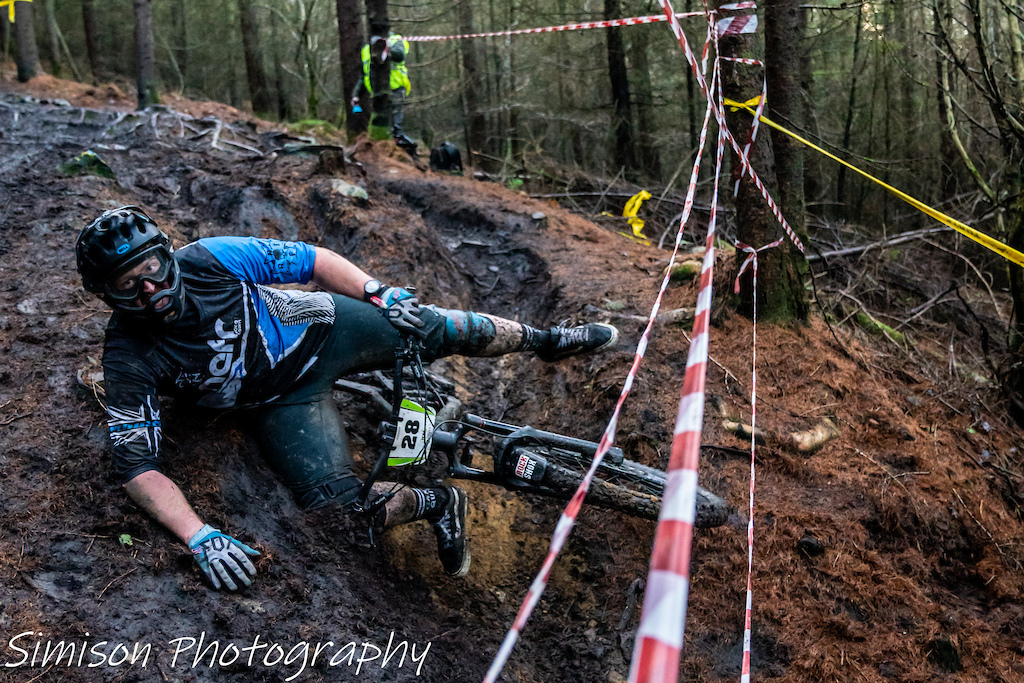 A few riders in amongst the carnage that is winter racing. Photos James Simison and JWDTphotography

If you liked the photos and description of the trails itself, I cannot recommend Danny Hart's Descend Bike Park more. To see what it's all about, have a look at their website and book yourself onto an uplift, Sue and Paul Hart will certainly look after you and you might even find yourself sharing an uplift with Danny himself. Carl Davison the organiser would appreciate a shout out to Danny, Sue and Paul for the use of the Bike Park over the weekend. 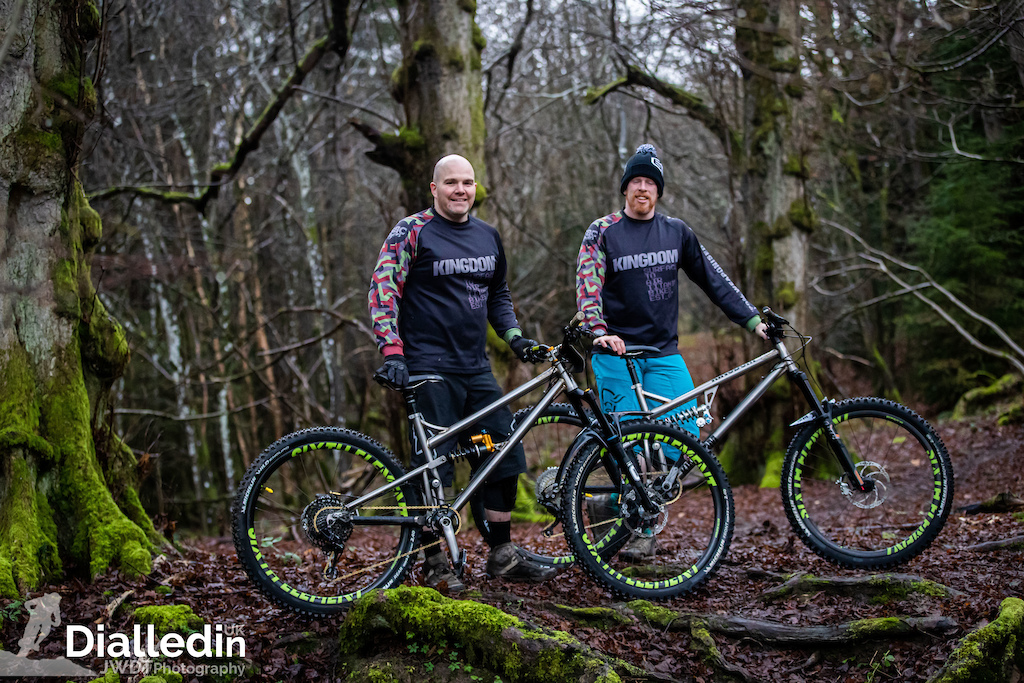 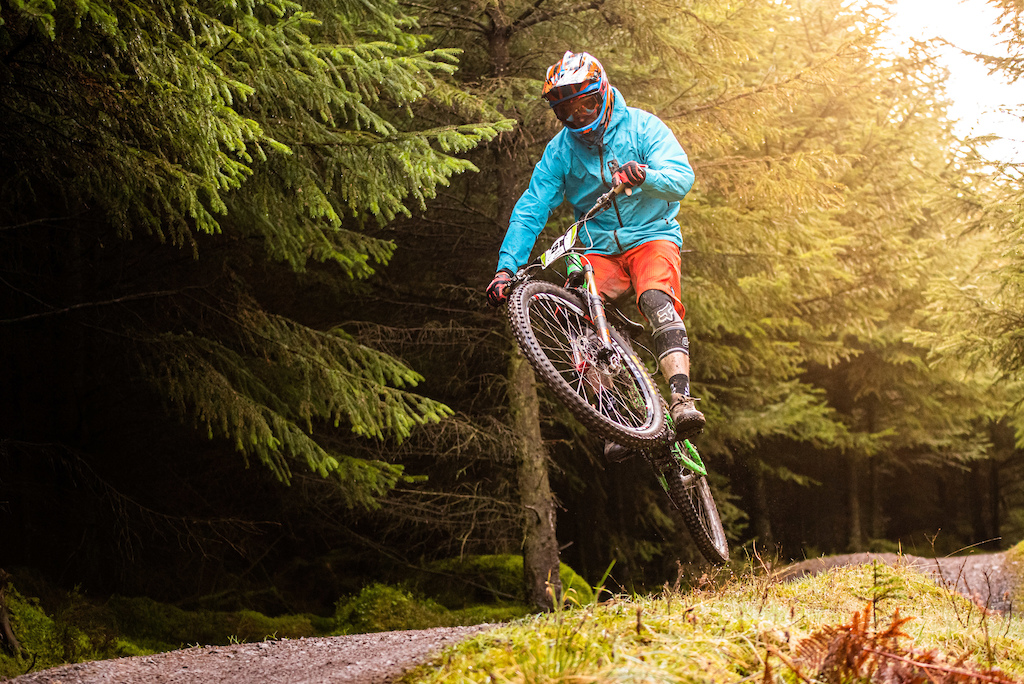 You gotta send it for the cameras
So that's a wrap for this report. I'll be heading over to Ae for the TT, it's really not one to be missed. Flat out adrenaline, great banter and top organisation. 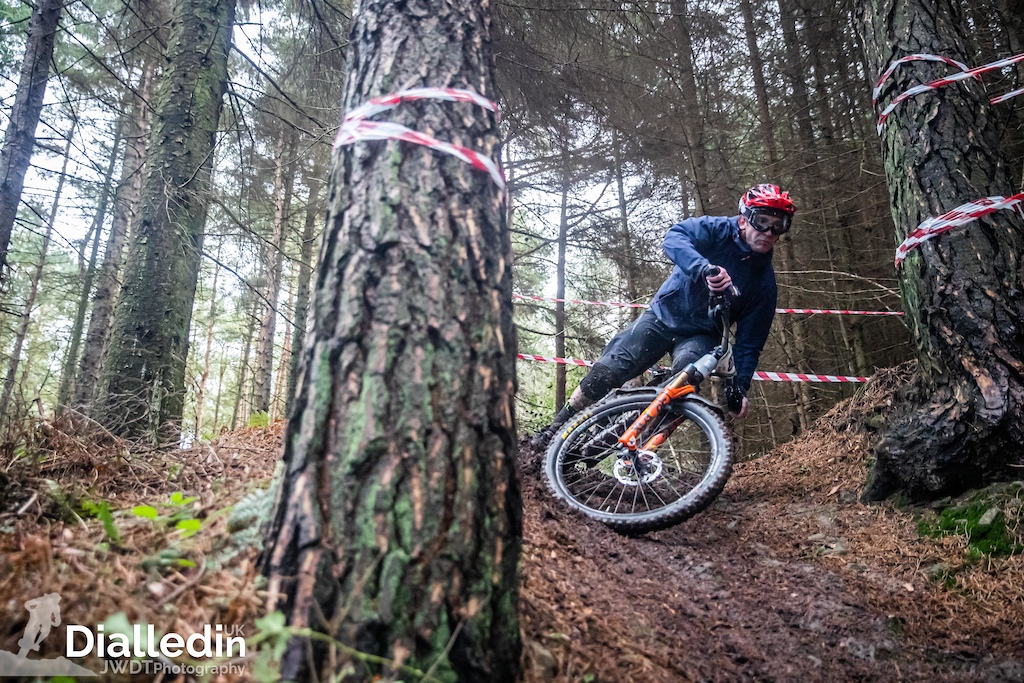 Did Zac save it?? He sure did!!
Race report and photos brought to you by @JWDTphotography.
A huge thanks to Andy Cole and James Simison for helping with photos, and standing in the cold all day.
Disclaimer: I have stuck to Carl's map for information about which stage was which.

gregspeakie (Jan 14, 2020 at 7:36)
This is my first proper british winter trying to ride my mtb regularly rather than just staying indoors, and its a tonne of fun basically going sideways down most of the trails and previously easy blues keeping you on your toes due to all the slop. Those roots look gnarly though!

I'm hoping to help bolster the female entries a bit at Ae. Maybe it was just a timing thing, being so close to xmas?

SimisonPhotography (Jan 14, 2020 at 7:52)
One of the marshals was videoing that stage, hopefully he uploads it soon

aljoburr (Jan 14, 2020 at 12:40)
Why does slippy slidey enduro not make anyone think that covering your gears was better, Said no one ever!