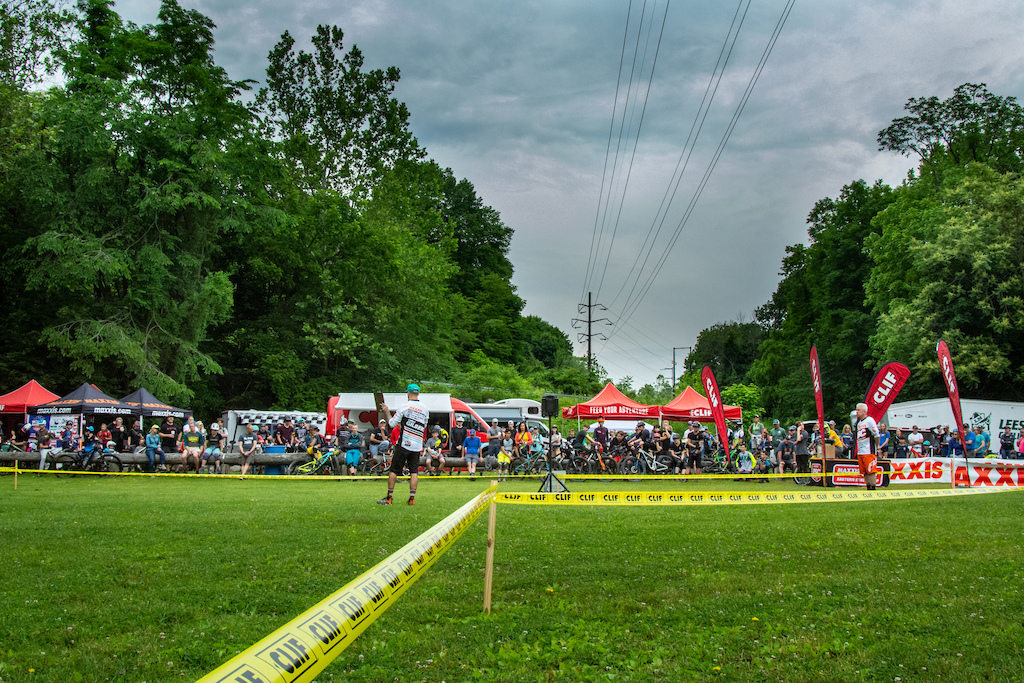 On any given summer weekend, the Pocono Mountains in northeast Pennsylvania is populated by tens of thousands of tourists. Couples, families, and tour groups visit the tourism based area in search of water parks, hiking, shopping, and most often a break from the grind of the 9 to 5. While all this goes down, an ever growing population of mountain bikers descend on Glen Park in Stroudsburg, the largest town in the region. The small county park had seen very few visits since the era of free ride and downhill riding ended in the mid to late 2000s. There was a small group of locals under the guidance of the Pocono Bike Club reinventing the mountain for enduro starting around 2012 but the park really was an unknown to those outside of the Poconos. In 2017 the Maxxis Eastern States Cup's George Ulmer and Pocono Bike Club leadership set up a meeting to discuss the possibility of a Maxxis ESC enduro race at Glen Park. Both went into the meeting with reservations. The PBC wasn't sure if they were ready for the attendance the series attracts while the Maxxis ESC had its reservations about Glen Park's somewhat unknown terrain. The gamble made by the two organizations was a clear winner however after the first race. The success continued with the second year's race, setting an attendance record for enduro races held on the east coast. This year's ESC Glen Park race was honored to achieve North American Enduro World Series Qualifier status. 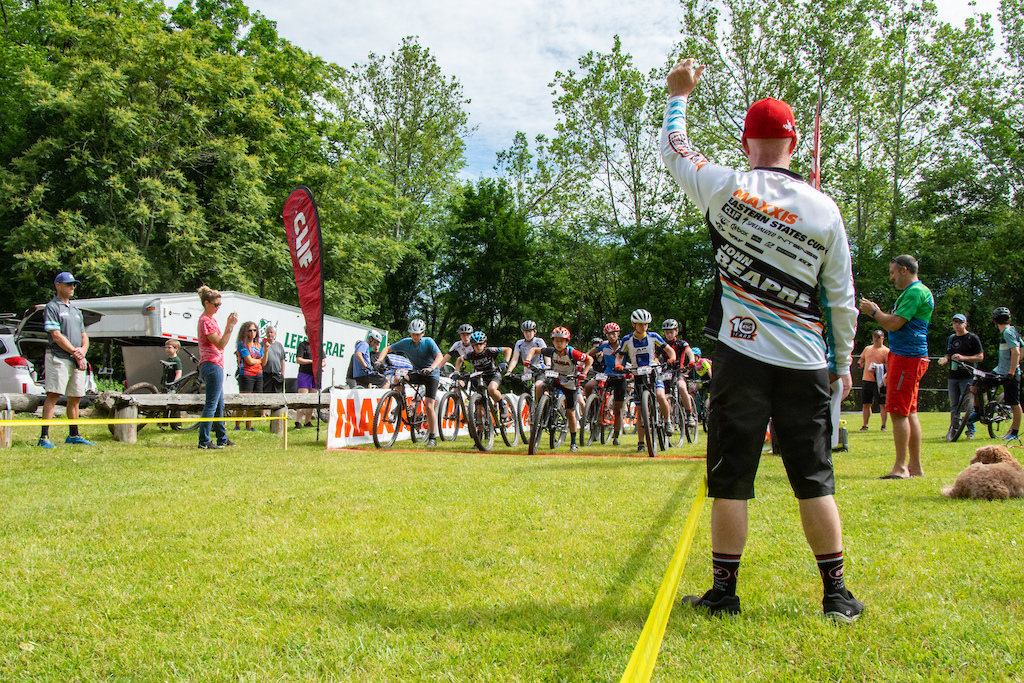 XC Race Director John Beaupre about to start the next class of U19 racers.
The Eastern States Cup has a long history of supporting youth racers. For multiple years the series funded the ESC North American Downhill Team. The team was the first all junior squad to receive full trade status from the UCI. The Maxxis ESC's Clif Kids program offers the youngest riders out on the course a guide to make sure their racing experience is a safe one. As a way to continue their support of youth mountain bike racing, the Maxxis ESC took on the role as promoter for the East Coast Junior Mountain Bike Championship, a race created by the promoters to complement the already established US Cup West Coast Junior MTB Championships at Vail Lake in California.

The race would be the first of its kind on the east coast offering both enduro and XC racing on the same weekend to solely racers 19 and under. After some deliberation, Glen Park seemed like the perfect location for the two disciplines to coexist for a weekend. The Glen is full of both natural and man made features that always send the stoke level to 10. Dan Brodeen of the Pocono Bike Club was tasked with building a championship worthy XC course on a mountain that is almost exclusively ridden on long travel bikes. Two large trail projects helped create a 2.5 mile loop that climbs the mountain in two stages then rewards riders with a half mile descent to the start/finish area. A large percentage of racers made it out to the race on Friday to sample the new course and to learn the lines for the enduro. 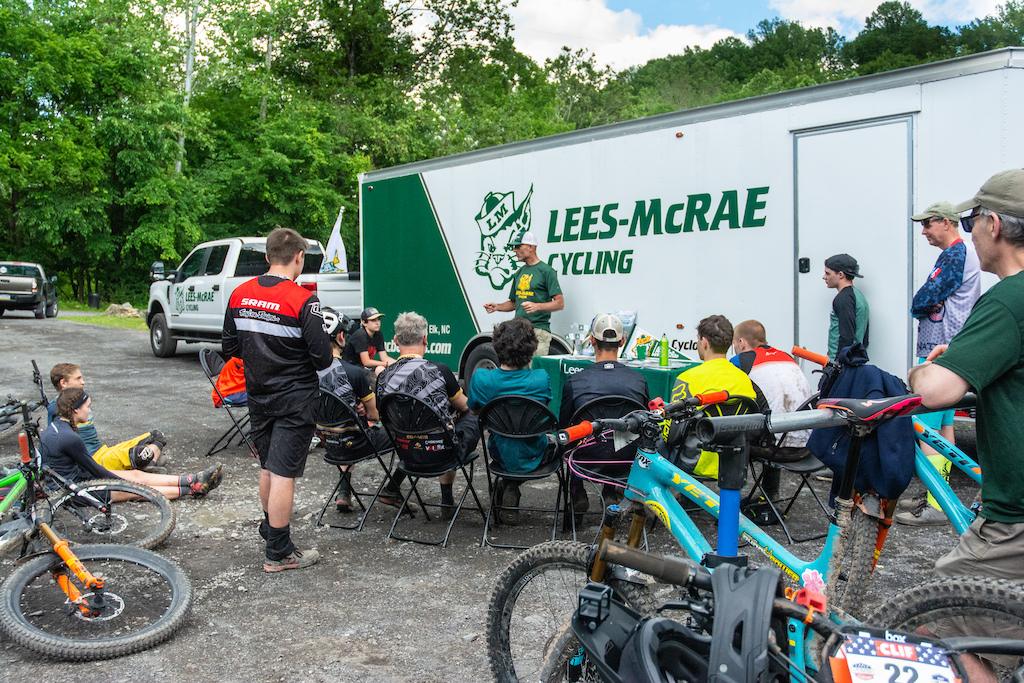 Lees McRae Director of Cycling Tim Hall speaks with aspiring enduro racers.
Practice wasn't just two wheeled fun on Friday. In between the enduro and XC practice sessions, Lees McRae College Director of Cycling Tim Hall made a series of informational presentations to the young racers. Hall also serves as the Bobcats Head Coach. He spoke with racers about cycling in college and all the programs Lees McRae offers. He emphasized that his school's program focuses on personal development as well as athletic. He feels he opened the attendees eyes to the fact that membership on the team is more than just racing your bike.

After each session he answered individual questions from both parents and racers. It was noted by multiple onlookers that the youths attending were hyper focused on every word coach Hall had to say. Cell phones weren't seen for the entire 50 minute session. Coach Hall was drawn to the event because it was only open to juniors and offered two disciplines that Lees McRae tends to attract to their program. Hall feels the event will grow much bigger once the word gets out about what a positive experience it is for young racers. 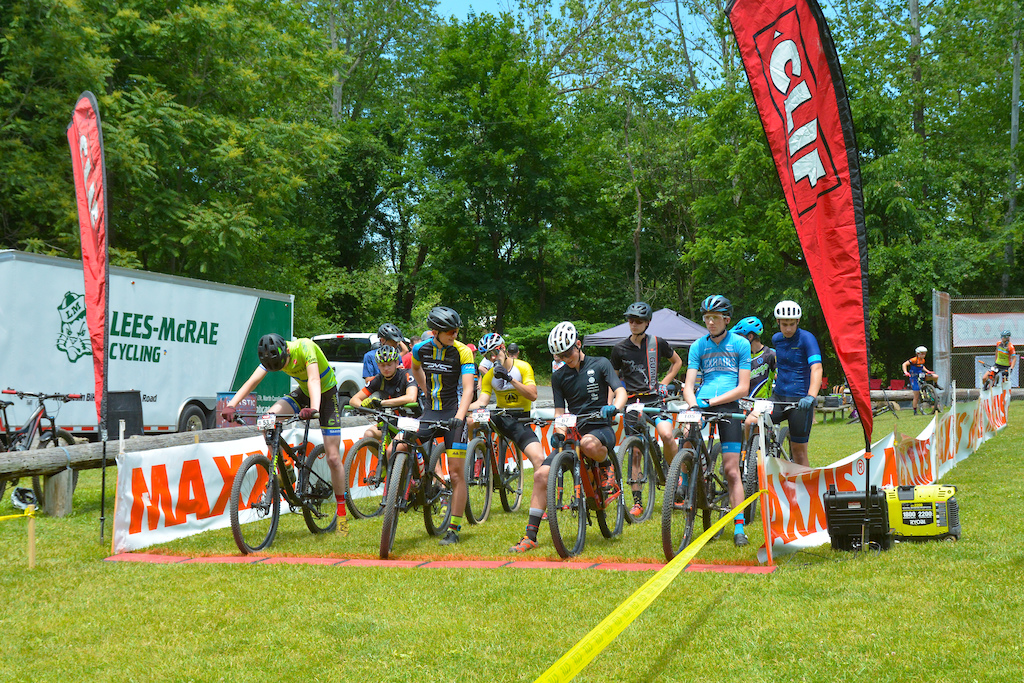 Elite Boys after the call up awaiting their race start. 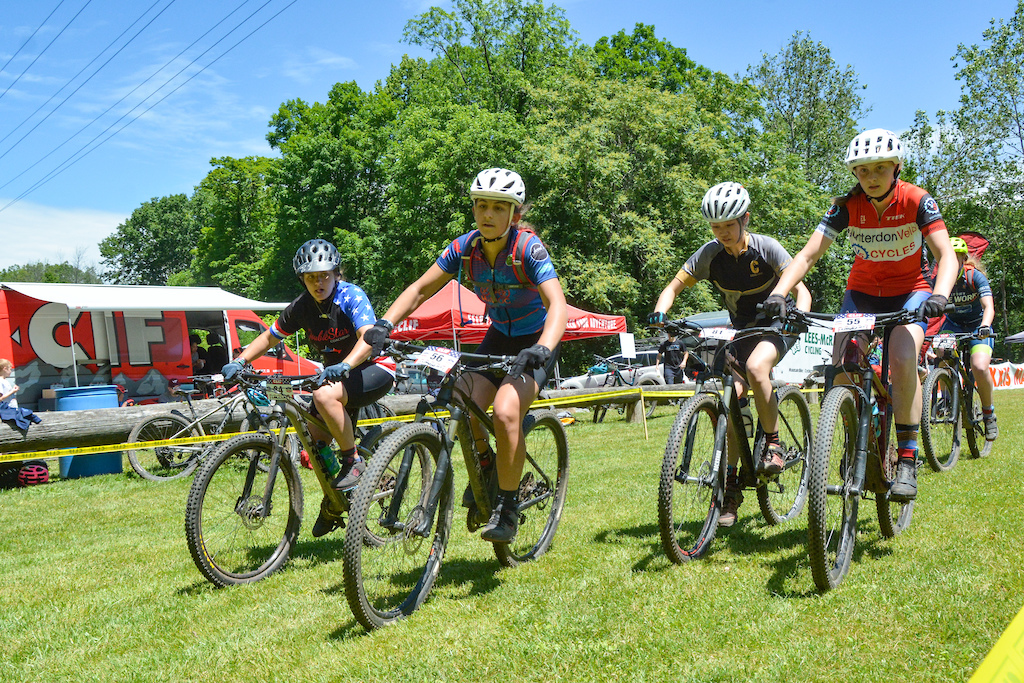 Girls 15-16 come off the start with 56 Zoe Olson getting the hole shot. Number 81 Stella Lei would end up with the win with an impressive 3:30 lead over 2nd place. 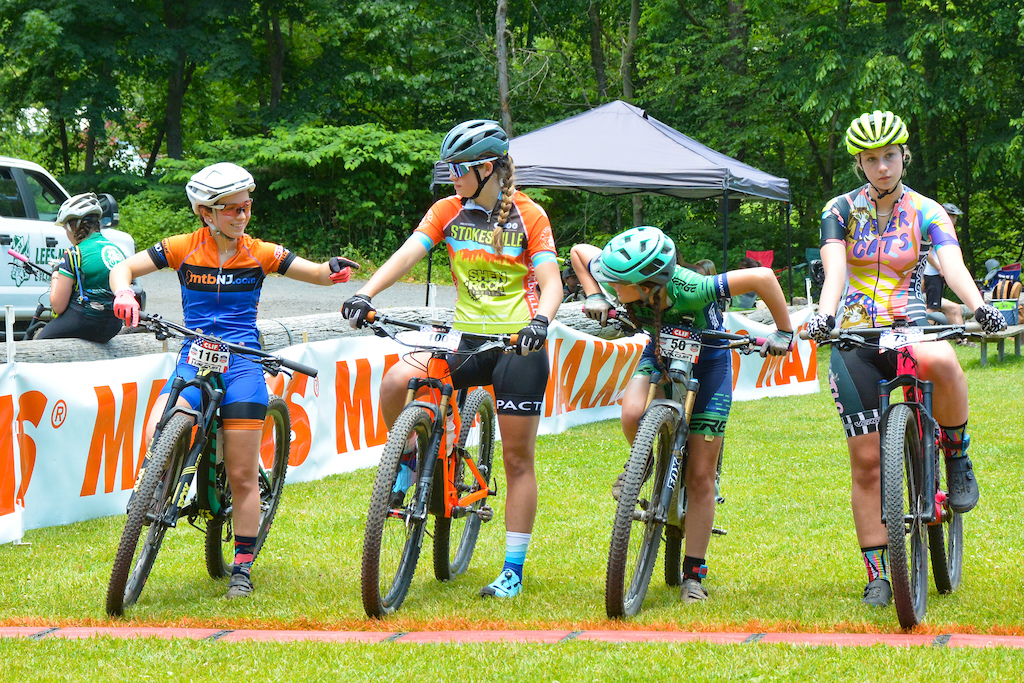 First row call up Elite girls chat it up before their race. 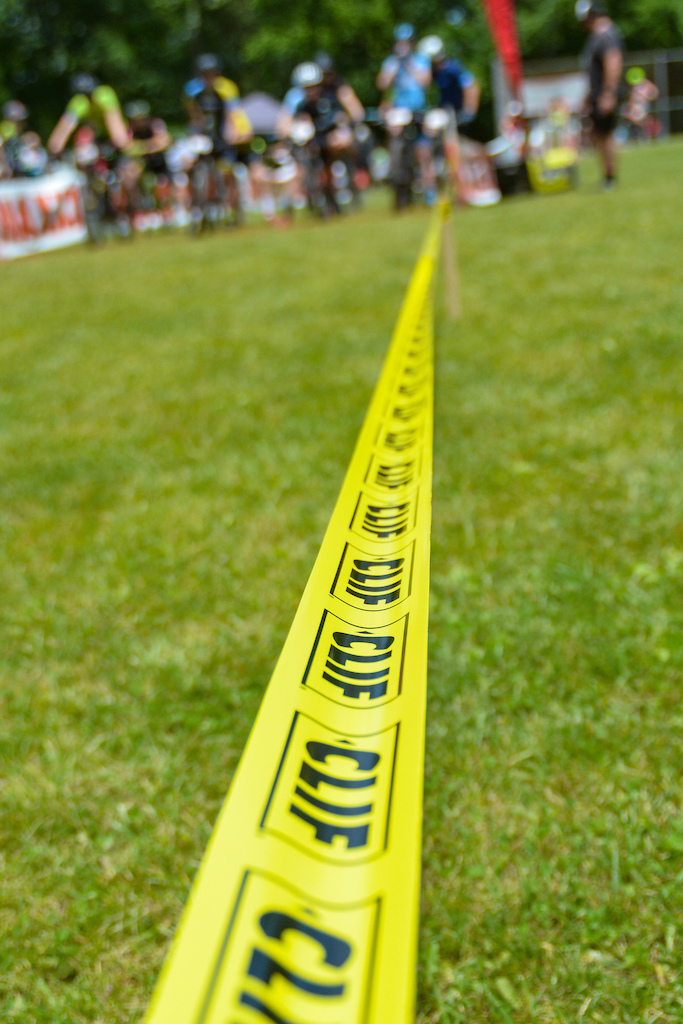 Clif was around all weekend offering up product to keep young racers energized.
Brilliant sunshine and a chill in the air welcomed racers Saturday morning. The 10-12 year old boys and girls lined up first to be the first XC racers in the history of Glen Park. The race flowed throughout the day while parents, friends, and siblings cheered on the young racers. Cranks Around the Campfire Mountain Bike Festival partnered with the event and offered the Cranks Kids Corner. In addition, they provided festival passes to their event for every podium spot awarded all weekend. Cranks Around the Campfire takes place August 23-25th 2019 at the Mt. Allamuchy Scout Reservation (www.cranksaroundthecampfire.com). Cranks offered different games and activities to keep the younger spectators occupied while their siblings raced. A steady line of supportive parents kept their stoke level high at the Santa Mama Coffee Roaster's tent. Local rider and co-owner Luke Heller took time out to show a handful of kids the basics of being a barista. Just in time for lunch the vintage polished aluminum Wabi Sabi food truck pulled in to offer up their signature Ramen menu. Another local rider, Jay Cooper, owns and operates the food truck in addition to his Saki Brewery and Bistro Sango Kura in Delaware Water Gap, PA. 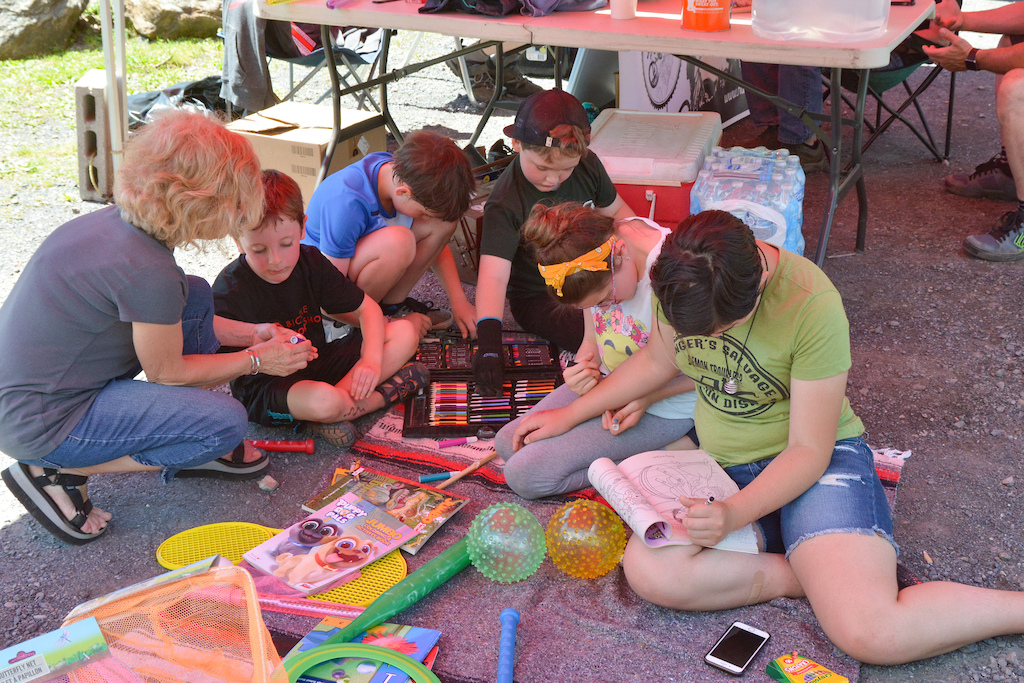 Cranks Around the Campfire's Lenora Brodeen helps kids with some coloring. 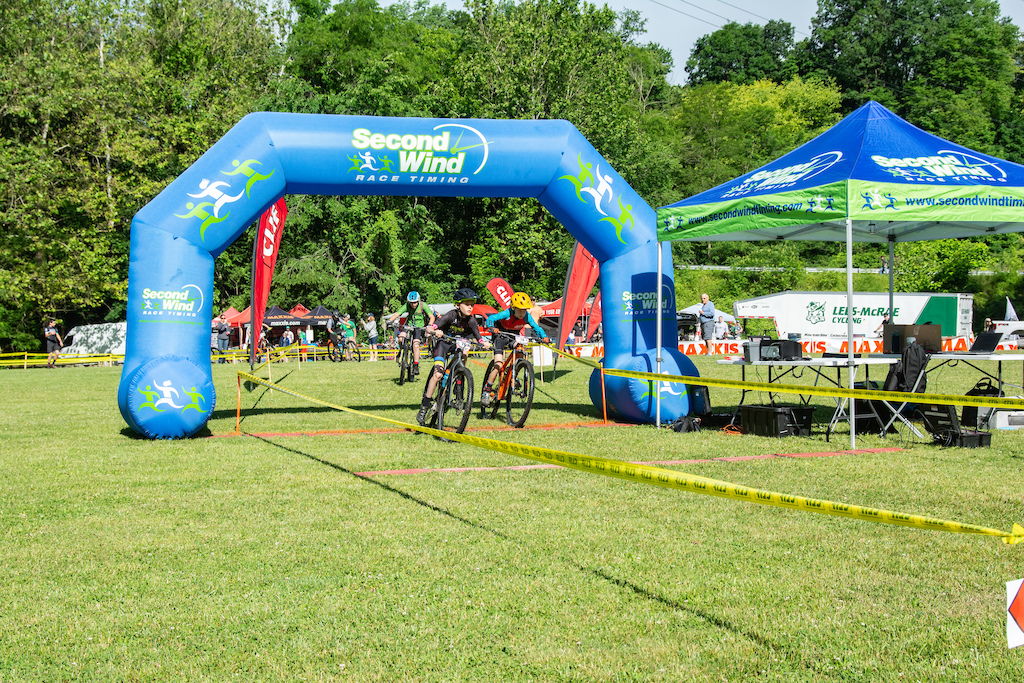 Second Wind Timing kept tabs on all the racer's lap times and provided live timing so results were posted in real time at the timing trailer. 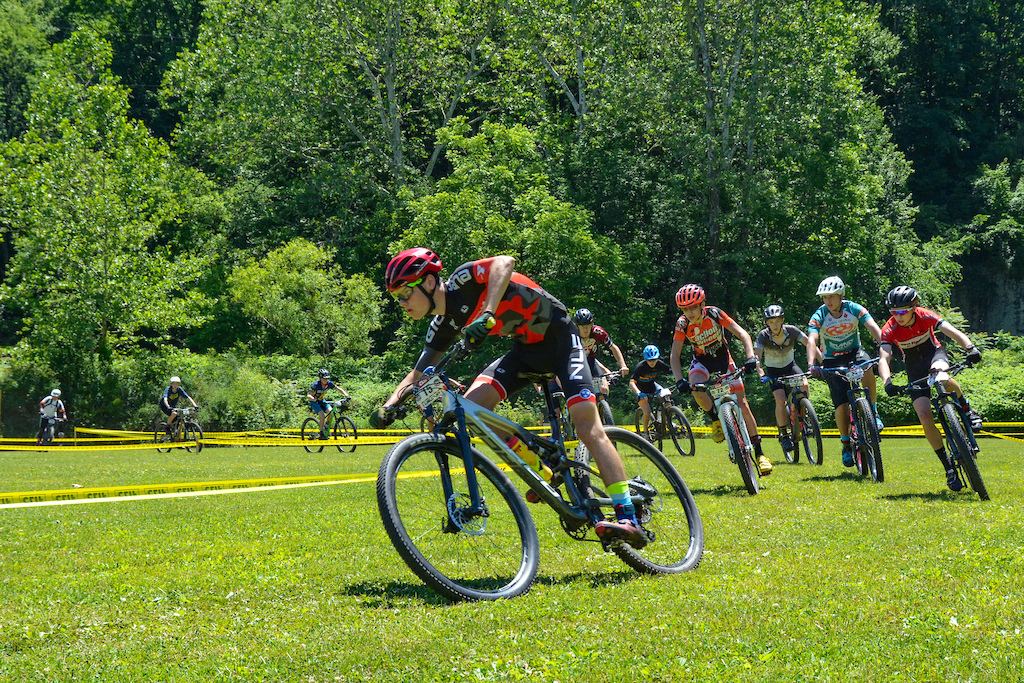 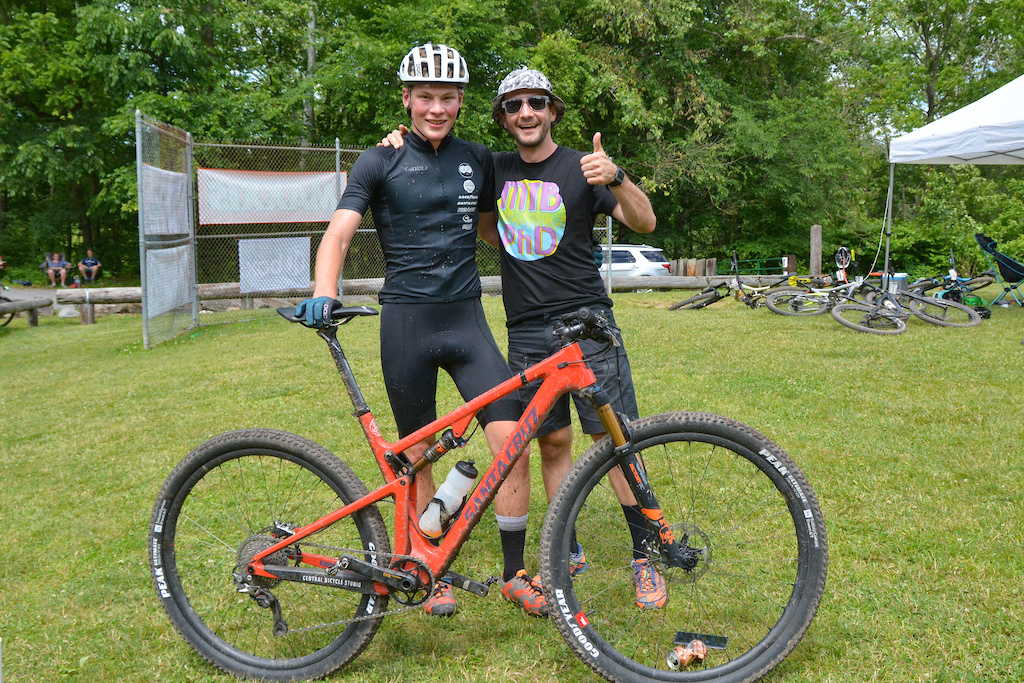 Elite Boys winner Caleb Bottcher from New Zealand has been touring the east coast with his coach Matt Miller, while his fellow countrymen deal with winter conditions back home. Miller of MTB PHD started coaching Caleb at age 15. Caleb is focused on getting in top form for the upcoming World Championships in August at Mont St Anne. Caleb truly enjoyed his stay in the states and is exploring college team options since back in New Zealand they really don't exist. Caleb stuck around for Sunday's enduro race and placed a respectable 15th in Elite Boys on his rigid post equipped Santa Cruz Blur. 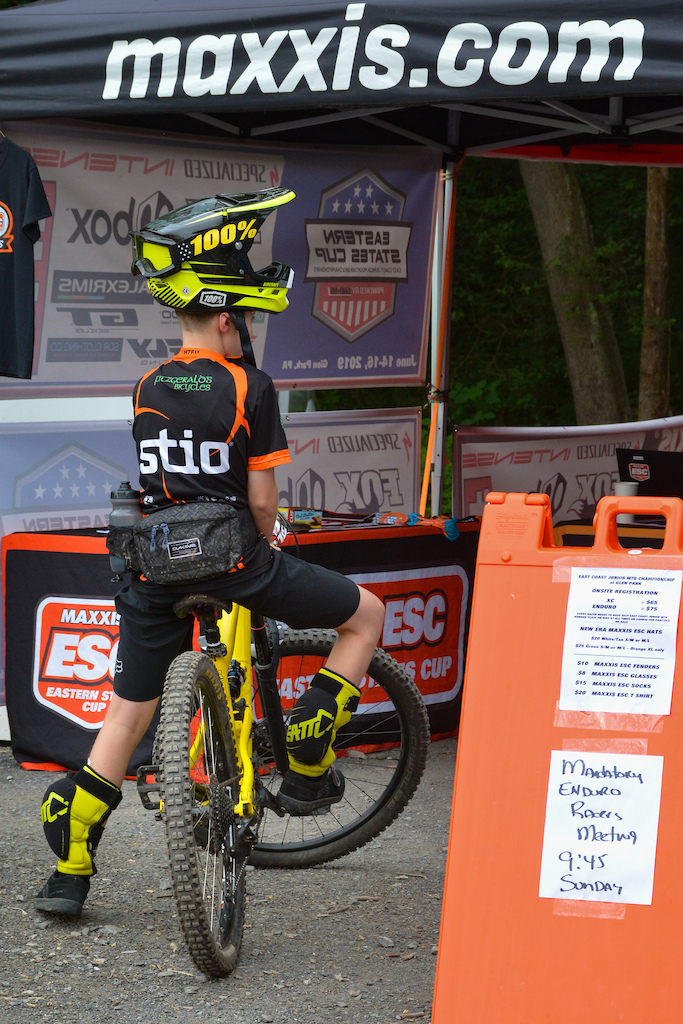 They may be young but that doesn't stop them from looking pro.

Sunday's less than optimal forecast of rain didn't dampen the spirits of the enduro field and the weather ended up staying dry until well after racing ended. The stages were full of variety and each one had its own flavor. The park is located on Godfreys Ridge and offers only 450 vertical feet of descent. The stages optimize the lack of vert but still contain almost no climbing. That doesn't mean however that there wasn't a lot of pedaling. The Glen is known for its flat corners that will have you sprinting back to speed if you haven't fully dialed your cornering technique.

There were many features that had riders catching some hang time but the course always provided a B line around to keep things safe. Racers used one common transfer trail back up the mountain. About 3/4 of the way up, the climb crosses the road where racers could stop at the Arlington Diner Aid Station. Local George Halas has been running his aid station for every enduro race and it has been one of the extras that set the Pocono Bike Club events apart from other local races. George also owns and operates the local bike shop in Stroudsburg, the Pocono Bike Company. Anyone looking to get to know the Glen's terrain should check out their Wednesday night group ride. 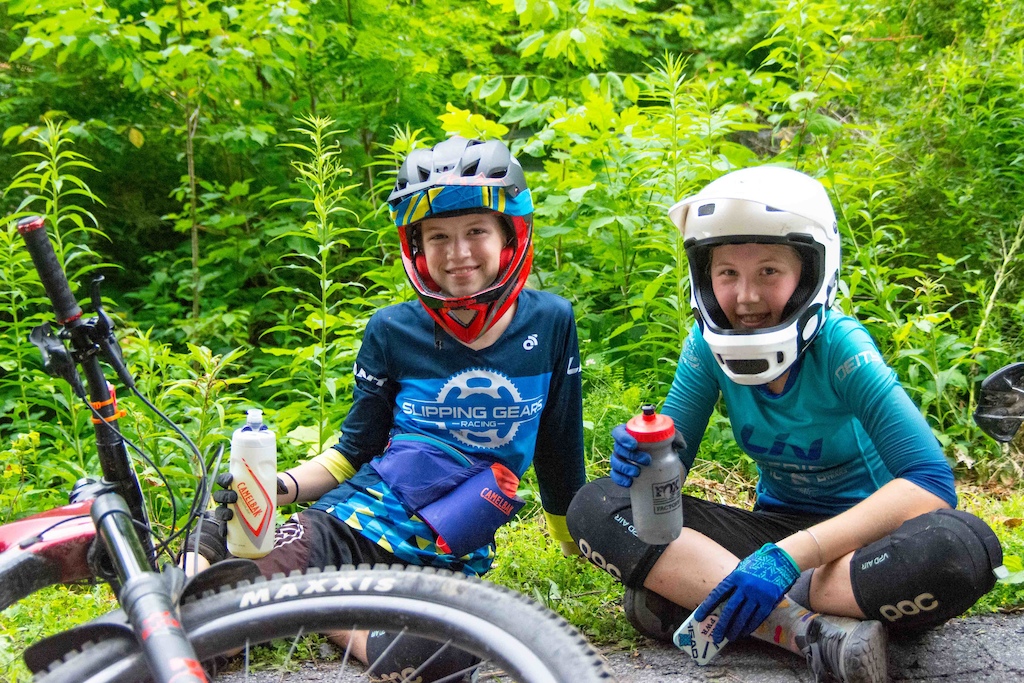 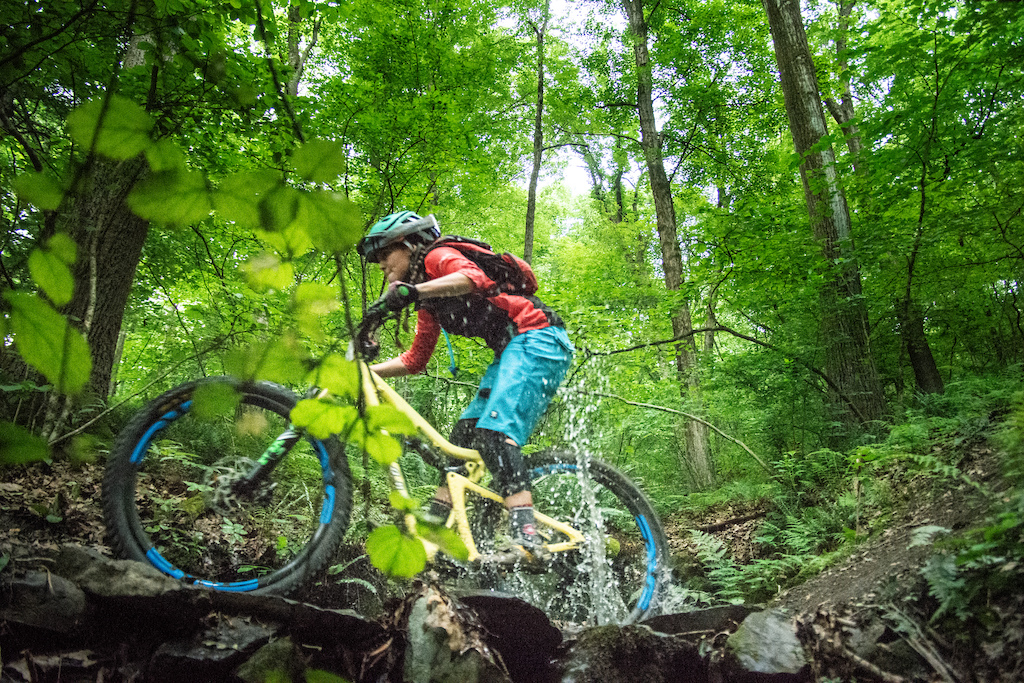 Stage One was the longest of the day and also claimed the most tires. Riders were pushing the limits on the opening stage and line choice became crucial to avoid mechanicals. 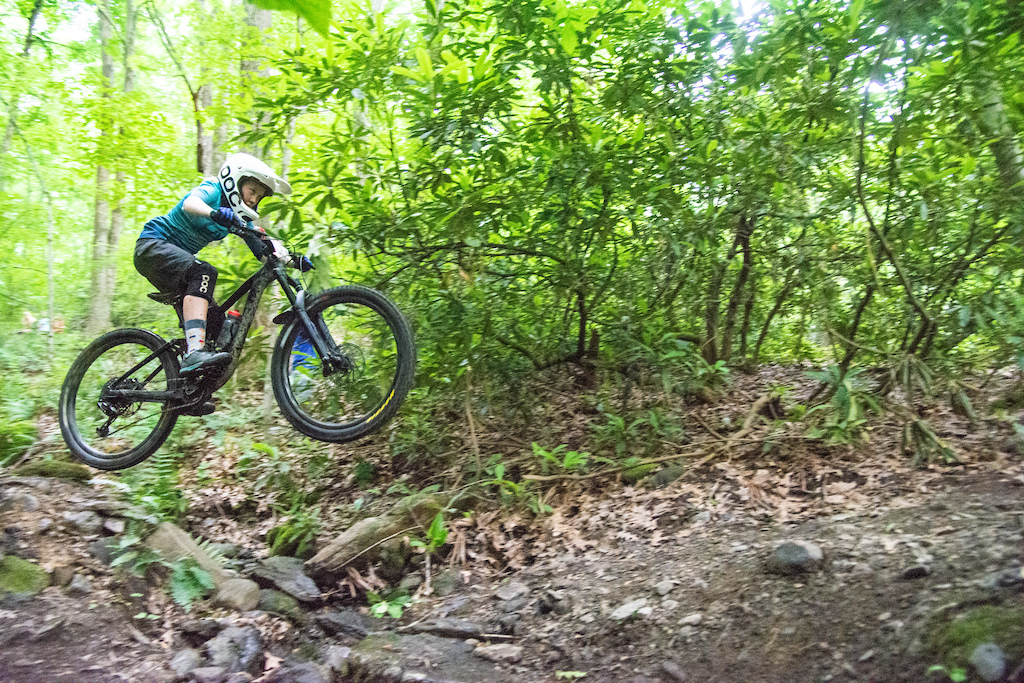 Stage one started with a series of flowing single track before getting technical at the base with a series of 3 rocky stream crossings on the Air BnB trail. Elite Girls winner Riley Miller of Vermont sends the creek gap and gains some time on those competitors who placed it safe through the creek. 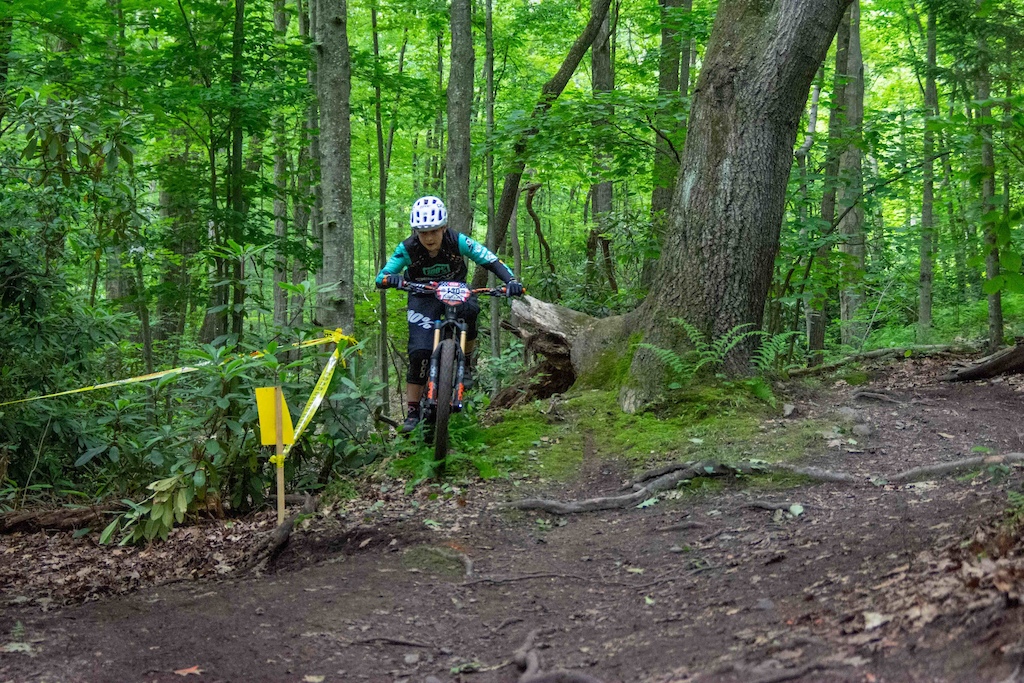 Stage two's infamous V-Notch tree jump had racers sending it on Friday's practice, but on race day most racers chose to keep their wheels on the ground. Here 130 Logan Tiger chooses a line course builders clearly didn't think was an option. 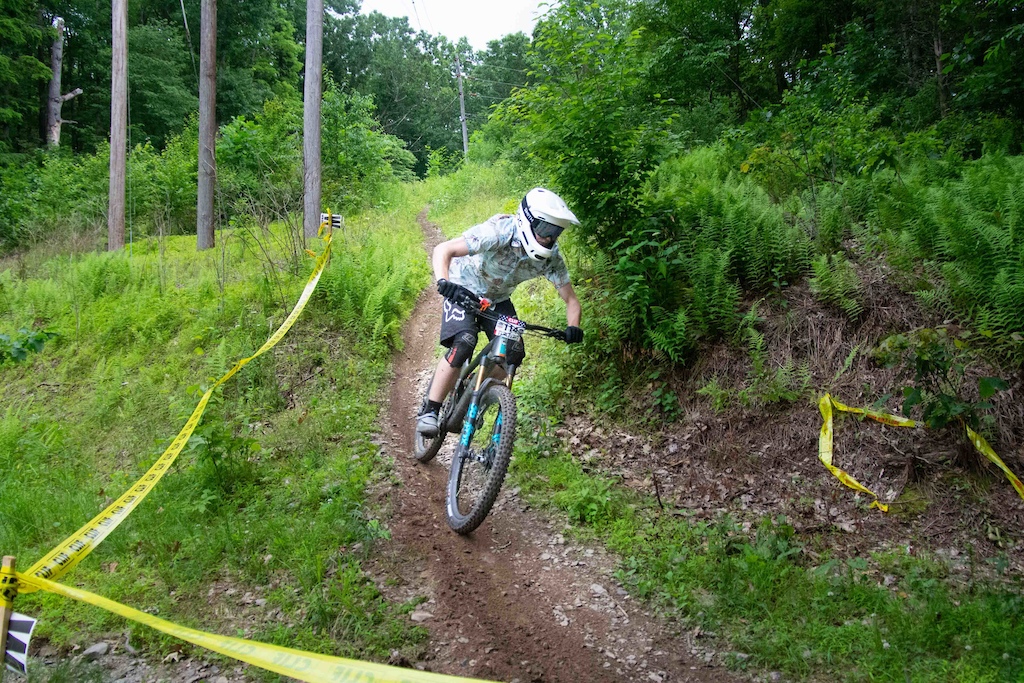 Stage four was the most direct down the mountain and finished on the flowy new Green Monster Trail. Rider 114 Joshua Nordheim kept his speed through this g out left hander while scoring style points with his kit choice.
The event will return to Glen Park in 2020 with a summer date that will be announced at a later time. 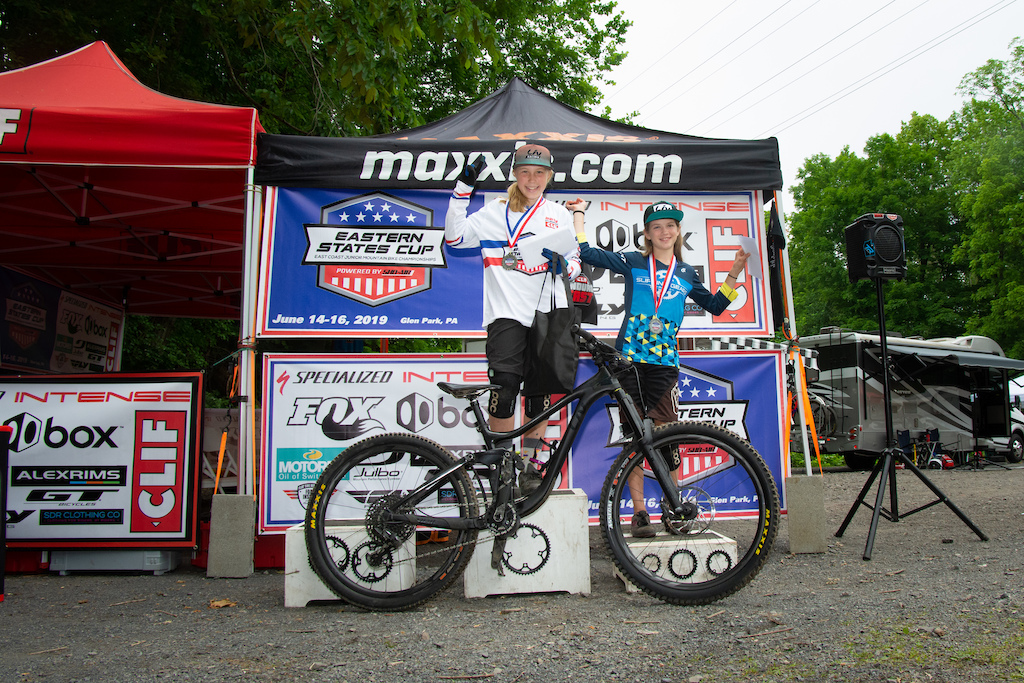 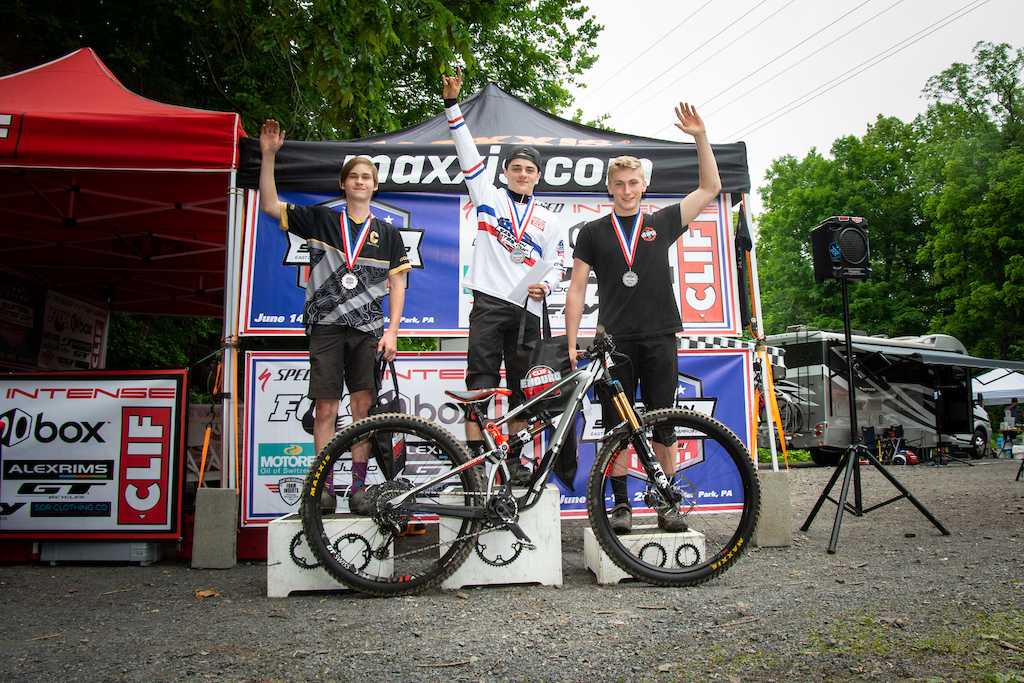 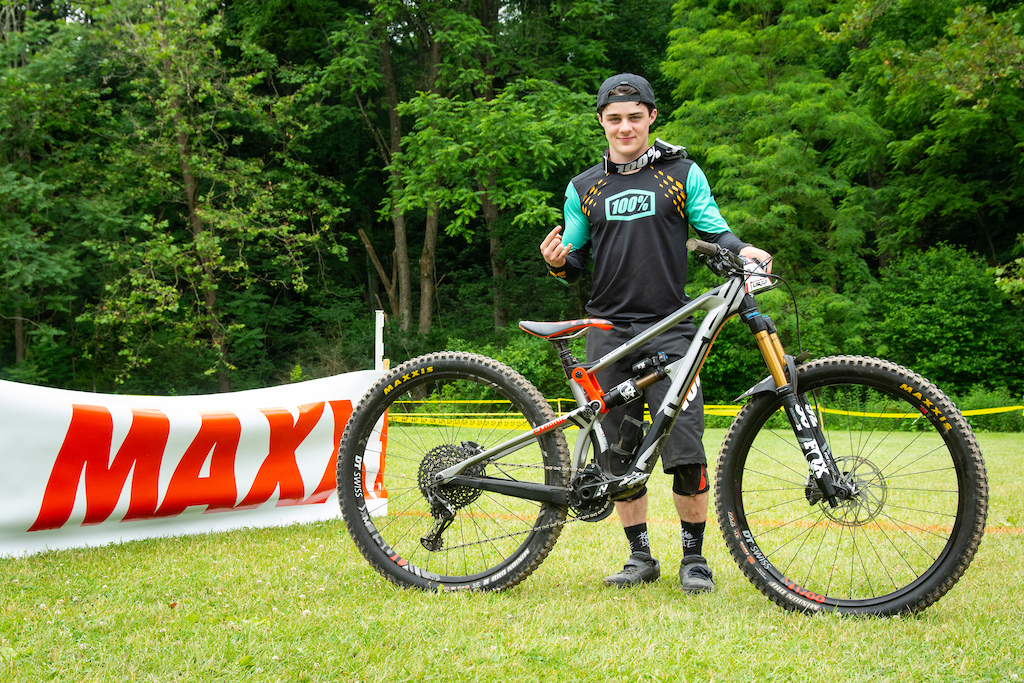 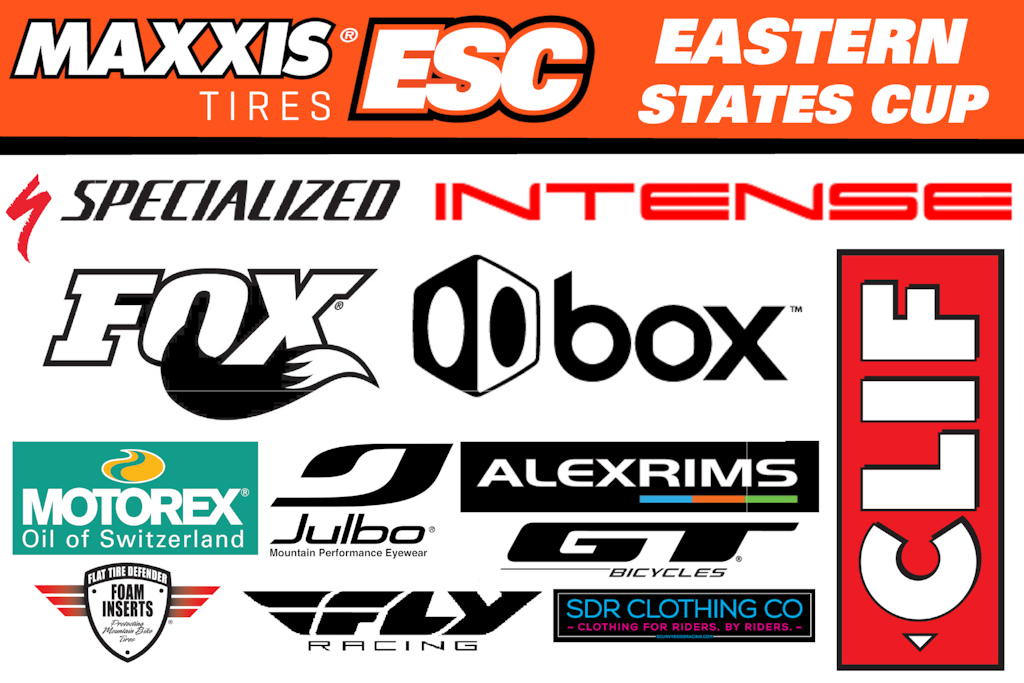 liv2ryder (Jun 20, 2019 at 5:31)
Kudos to the ESC and Pocono crews for putting on an amazing event. It was so cool watching all these kids having a blast on their bikes and making new friends. Looking forward to what the future has to offer.

mmfreak (Jun 19, 2019 at 17:29)
ESC and XC racing who would have thought it. Crazy fun weekend meeting new people who love riding.

fattyheadshok (Jun 19, 2019 at 18:32)
So proud of all these kids. They really pushed themselves. The ESC crew are simply the best. My boy loves racing Enduro.