Race Report: Final Day of Racing at the 2021 BC Bike Race 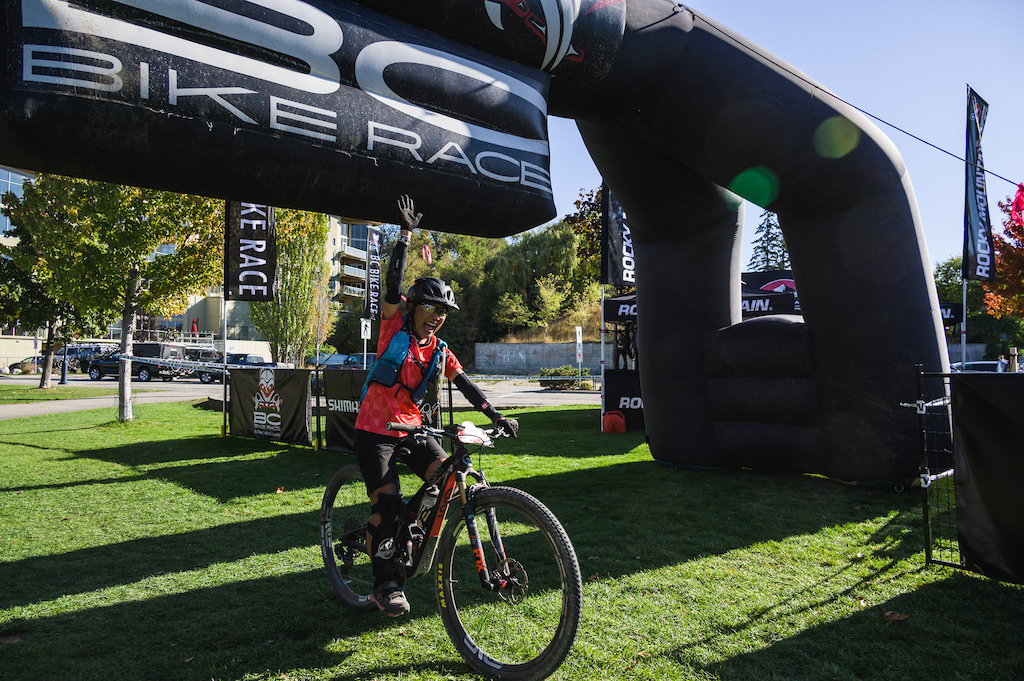 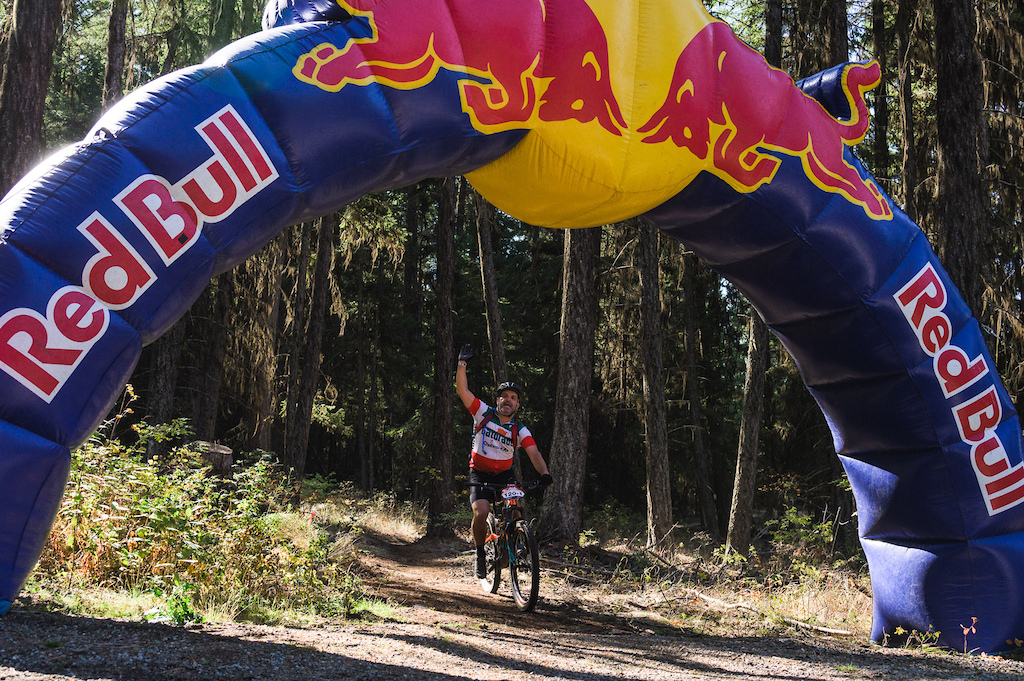 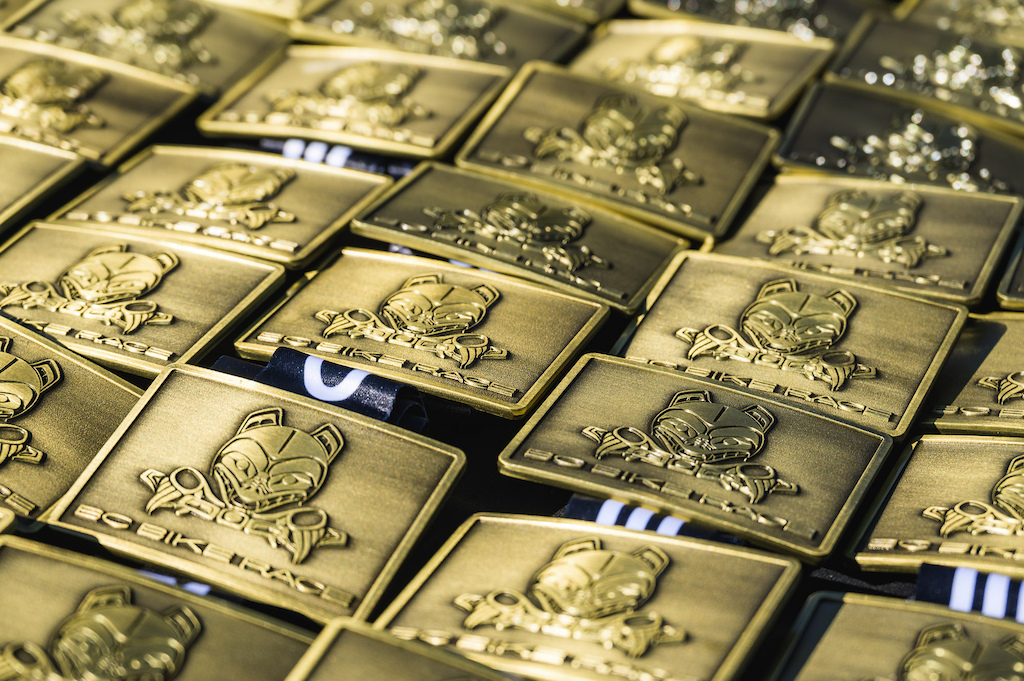 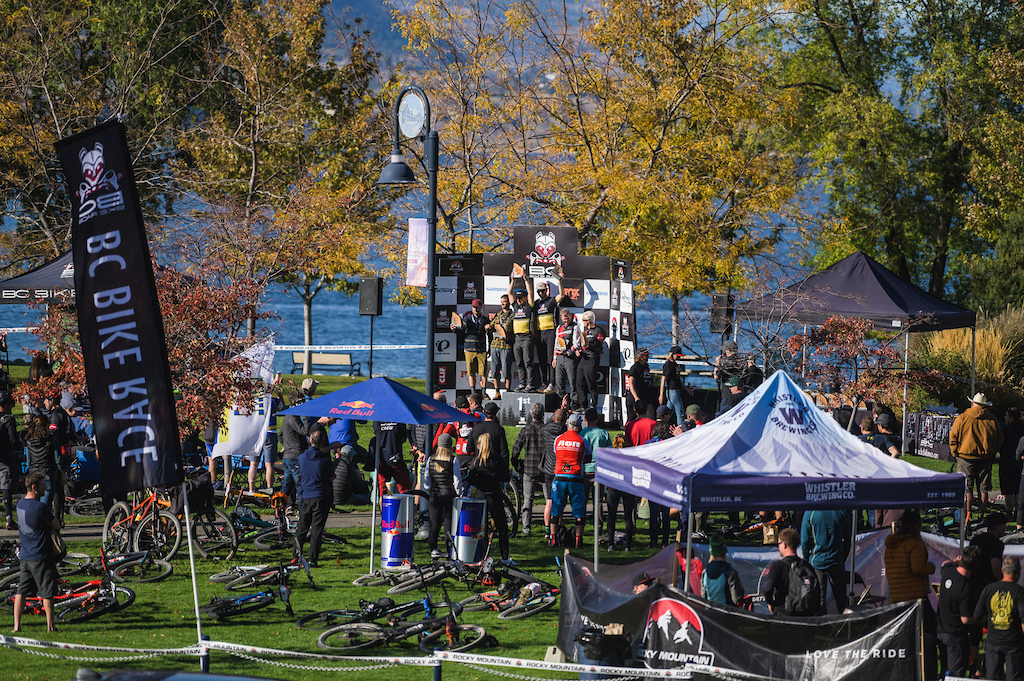 The final day, the grand finale is in the bag. The perfect wrap up to an incredible week of stories, adventures, mishaps, saves, and lifetime milestones. This year’s BC Bike Race was an epic adventure, sublime and diverse, shared by a like-minded group of racers from all over the world who simply love mountain biking in all its glory. 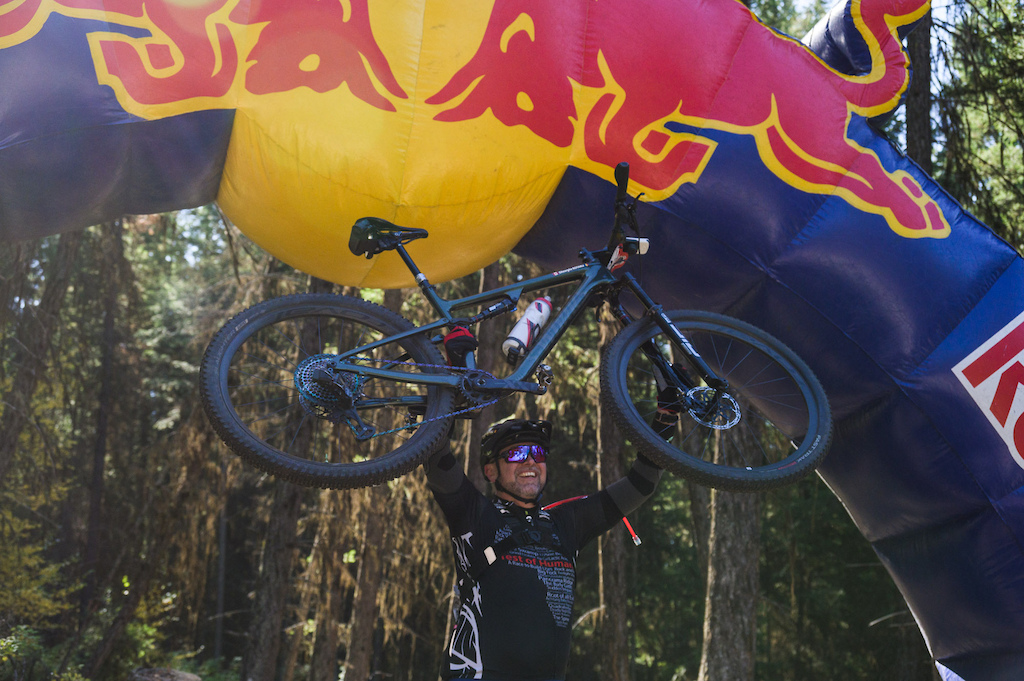 Six days of racing in the South Okanagan, seven stages of terroir-nouveaux never before sampled by the denizens of the BC Bike Race alumni new and old. This all-new odyssey, in an all-new location with such varied and vibrant flavours but with all the same energy and vibe, has been validated by smiles, high-fives and a solid coming together of this community.

What makes a success? What makes a win? Both can be measured in time, distance and/or speed. But the true accolades come from the testimony of those who have pedalled every meter, crossed every root & rock, and summited each and every climb. These are the testaments to the efforts of the organizers who shaped this event, steered the direction and created an unforgettable week. 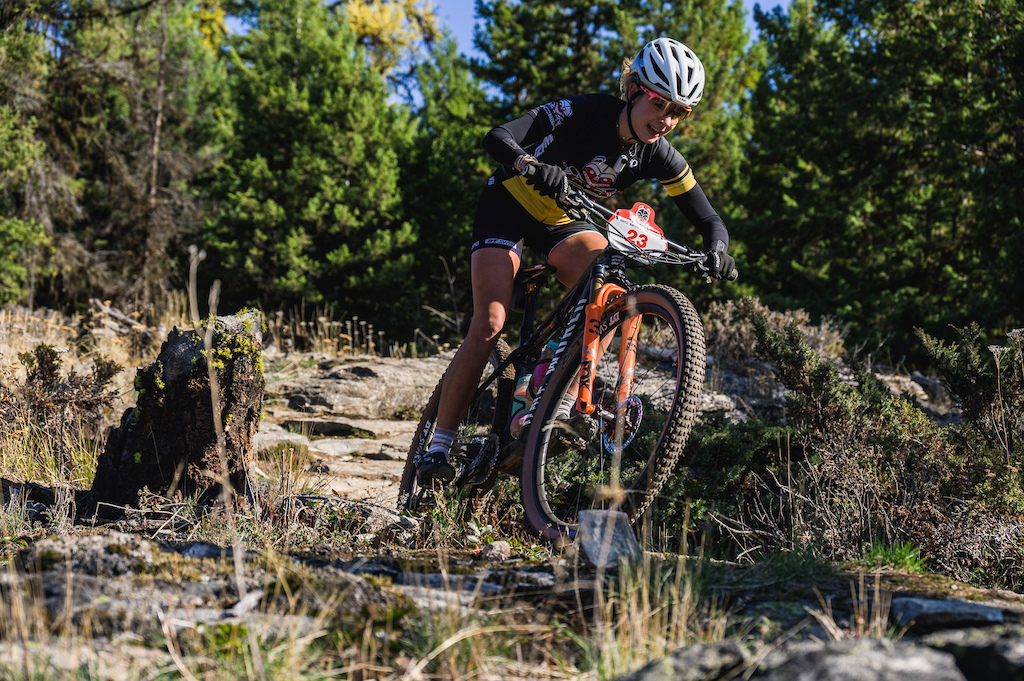 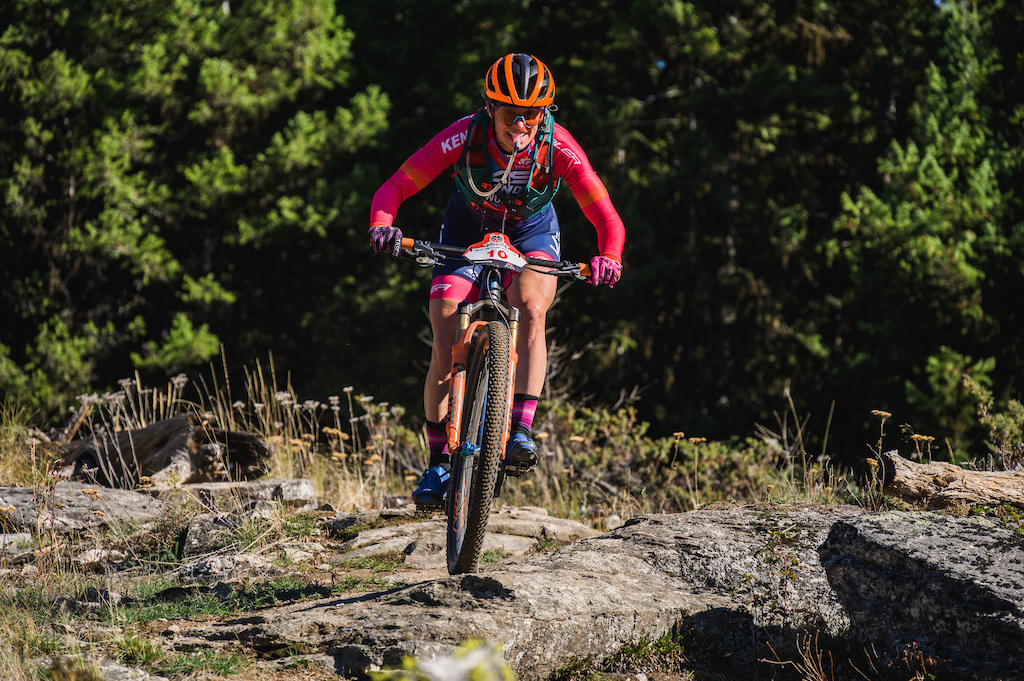 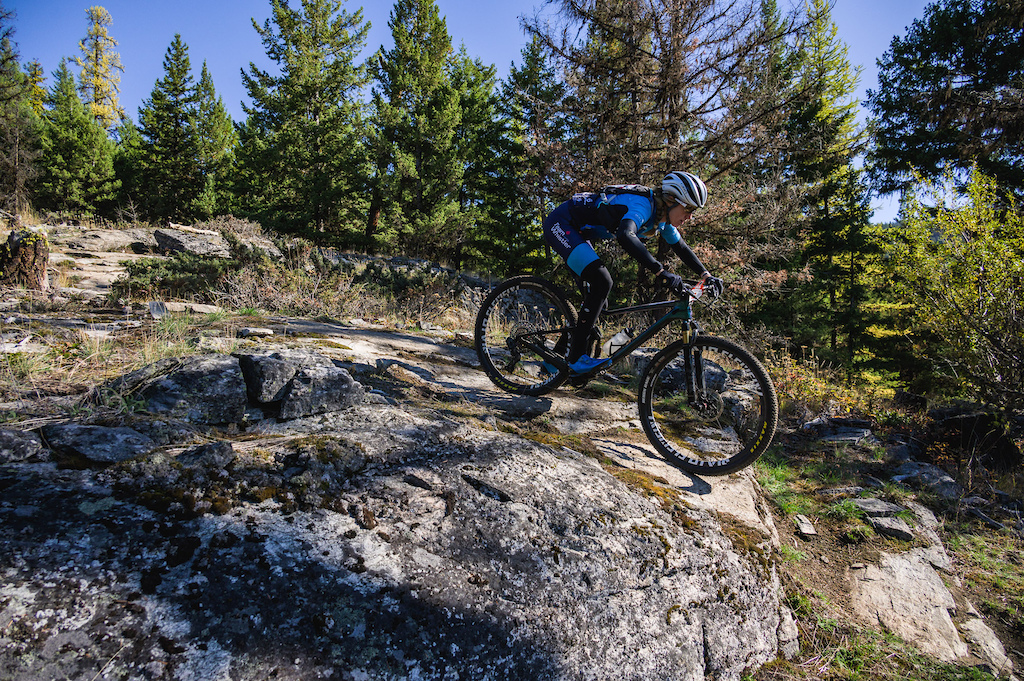 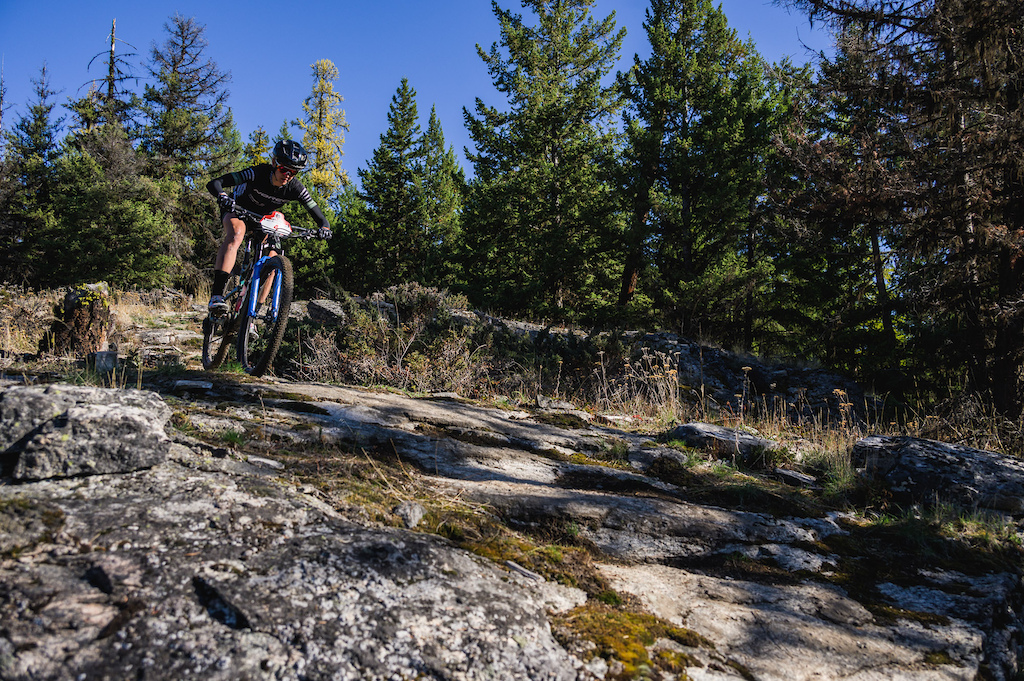 Once again the attacks came early from a yellow jersey. With all its glory and bragging rights on the line, who would expect any less! Laurie Arseneault (Canyon MTB Racing) stomped her usual way to the front of the group on the initial climb ahead of Haley Smith (NORCO Factory Team). But today things would be different, maybe. Nearing the bottom of the long and arduous descent, Haley closed in on Laurie not once, but twice. Each time over cooking a corner or slipping a pedal; things just weren’t working out for her. With a possible stage win on the line Haley threw a brick on the accelerator but each braaap of speed cost her some minor mishap. The final results show a close race but only the camera caught the near-miss in full focus.

Geoff Kabush (Yeti, Maxxis, Fox, Shimano, Stans No-Tubes, Pro Velocio, GU Energy) was gunning for redemption. What did he have to lose? Up the first climb he led Felix Burke (Rocky Mountain Bikes), yellow jersey leader Andrew L’Esperance (Norco Factory Team) and dangling just off this group by mere seconds was Carter Nieuwesteeg (Santa Cruz Bicycles, 7 Mesh). They crested the top of the climb in the same positions but chinks in the armour soon began to appear. What was a 10 seconds gap became a 20 second gap as Andrew L’Esperance took the lead and forged ahead to overall victory. Felix Burke, last year's champion wearing the #1 plate, was not going to lie down and give up his title. He gave a spirited chase but it seemed the overall outcome was a foregone conclusion with nothing to do but defend his podium spot from a fast-charging Kabush. The trio smashed everything in their path both up and down as they warped down the proffered trails, all making a superhuman effort to effect their desired outcome to the overall standings. It was all to no avail; it remained static. Carter Nieuwesteeg rode an incredible chase all day, solid on the up, solid on the down, but all his efforts couldn’t dent the inspired riders in front of him. 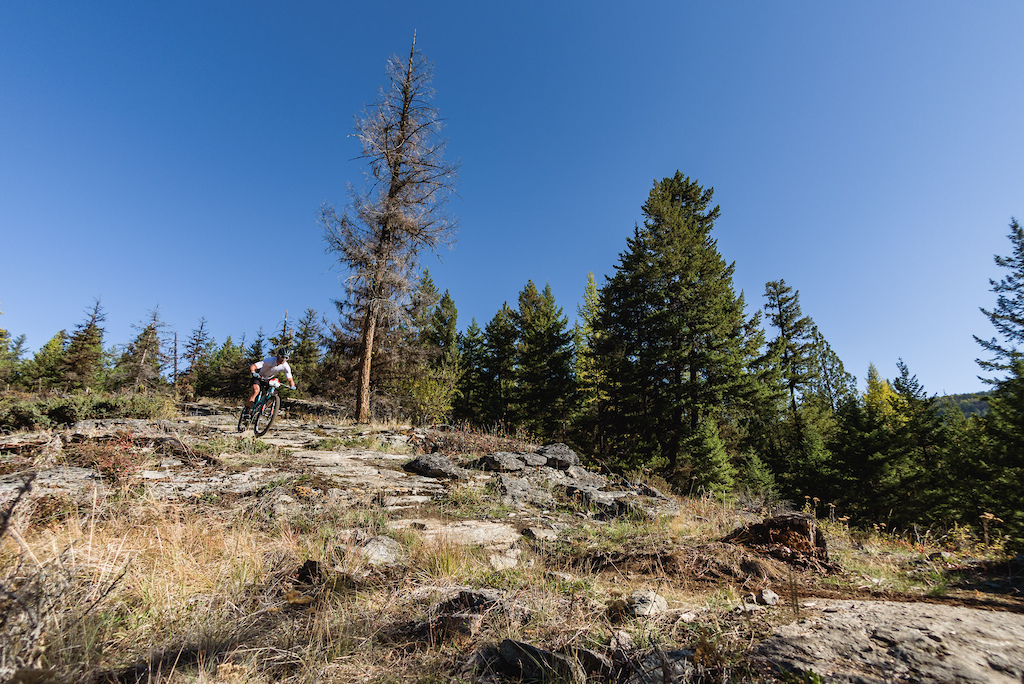 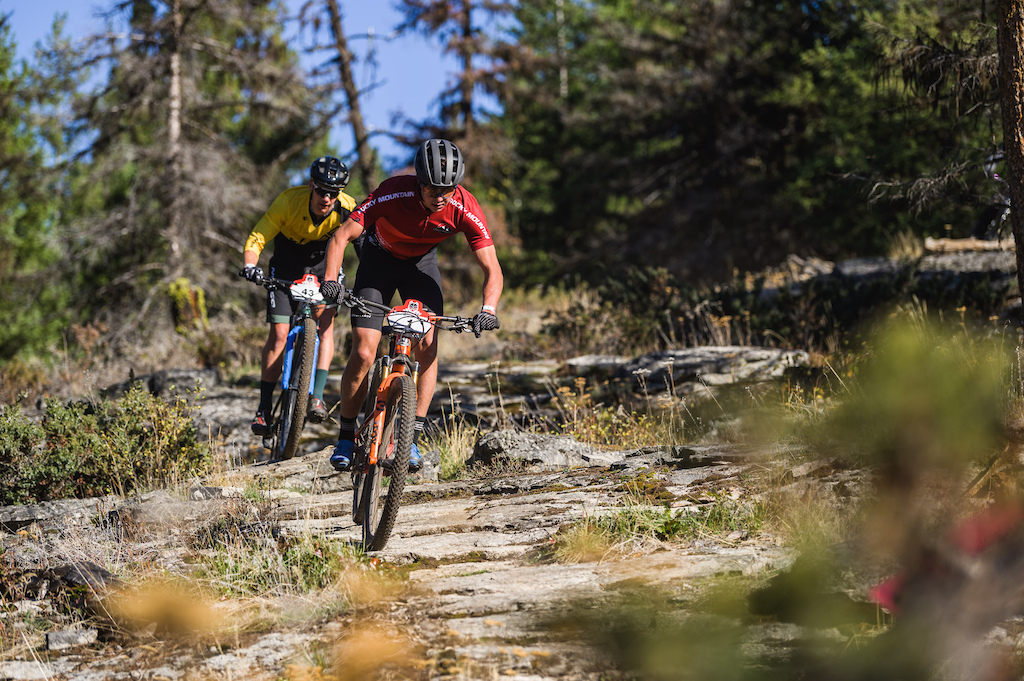 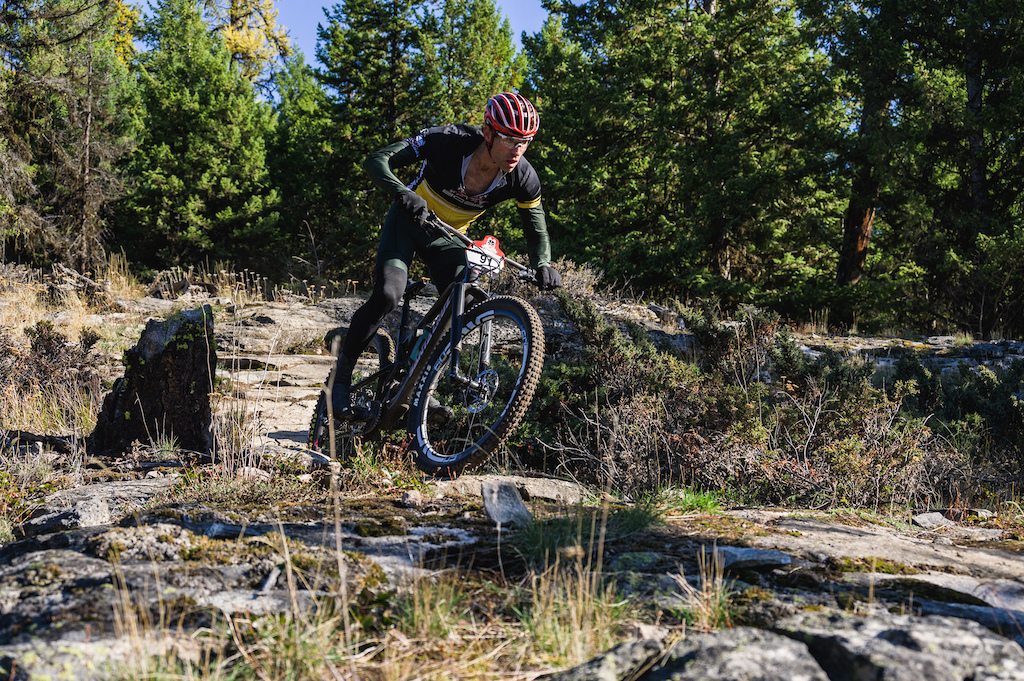 The unsung heroes of this week have been pushing hard and lurking just off the front: Payson Partridge and Matthew Fox. Who are these mavericks from the US, coming to challenge for the “Ultimate Singletrack Experience” leader’s jersey. While they finished respectively in 5th and 6th overall, just ahead of the Endurance-Giants (those who competed in both the Gravel Explorer and the BC Bike Race), Cory Wallace (Kona Endurance Team) 7th overall, and Karten Madsen (MAD Endurance Coaching) 8th overall. These two athletes, Payson Partridge and Matthew Fox certainly have the chops to be contenders one day, for sure.

Katleyn Button (Coast Physiotherapist Sechelt), Emma Maaranen (KS Kenda Women’s Elite Team) and Chloe Cross (Team Whistler), finished 3rd, 4th and 5th respectively in the womens’ open solo, and they have smashed all the trails, all the days, and have consistently battled for top spots. They have crushed all the obstacles in their paths and come out stoked to have explored all that BC Bike Race and the South Okanagan have to offer. 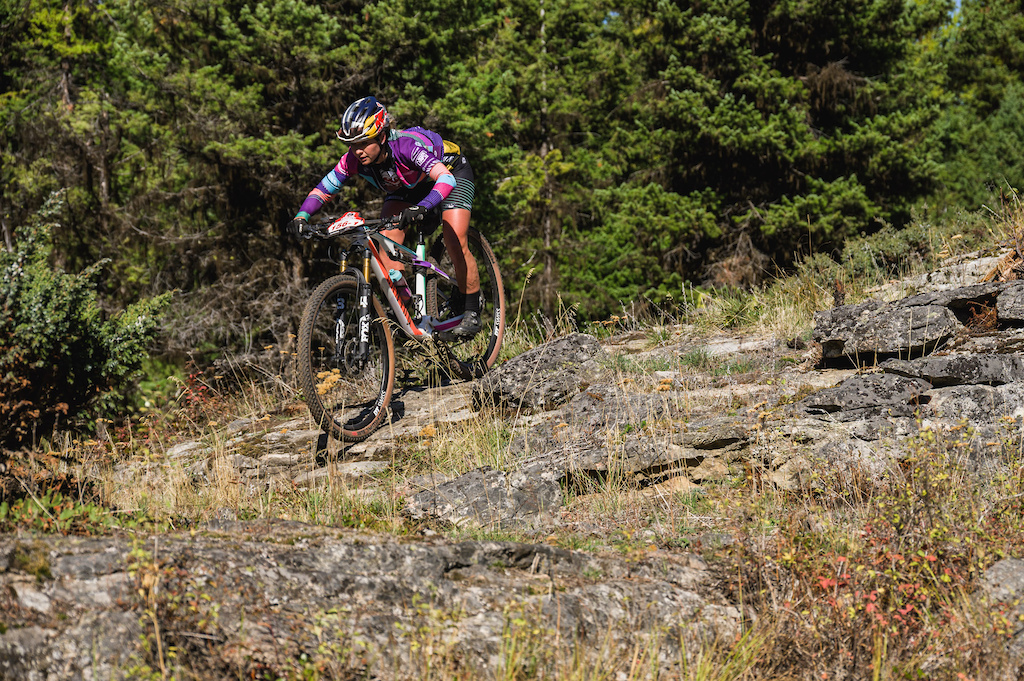 Kimberly Quinlan came out tops in her battle for the Women's 40+ solo category. While Graeme Fitch, having finished his 14th BC Bike Race and 100 stages, finally got an overall bronze podium in the Men's 60+ solo category. Wow, that’s amazing! John Bula and Taylor Little (Bicicletta Factory Racing) took top honours in the Mens 80+ team category, but let's not forget that John Bula also raced the Gravel Event just before this one! 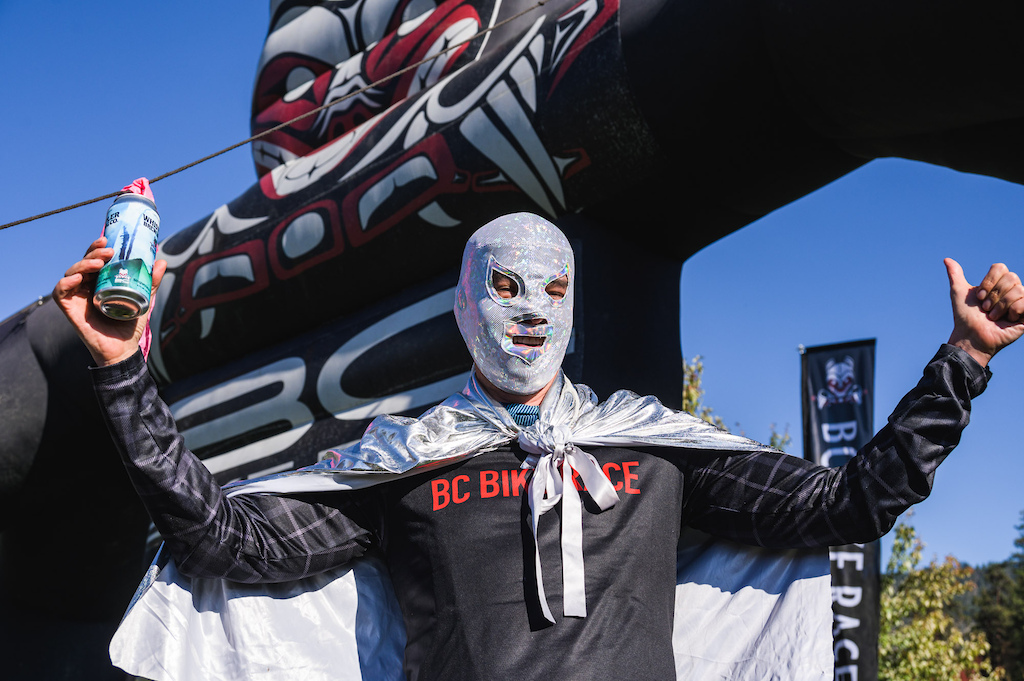 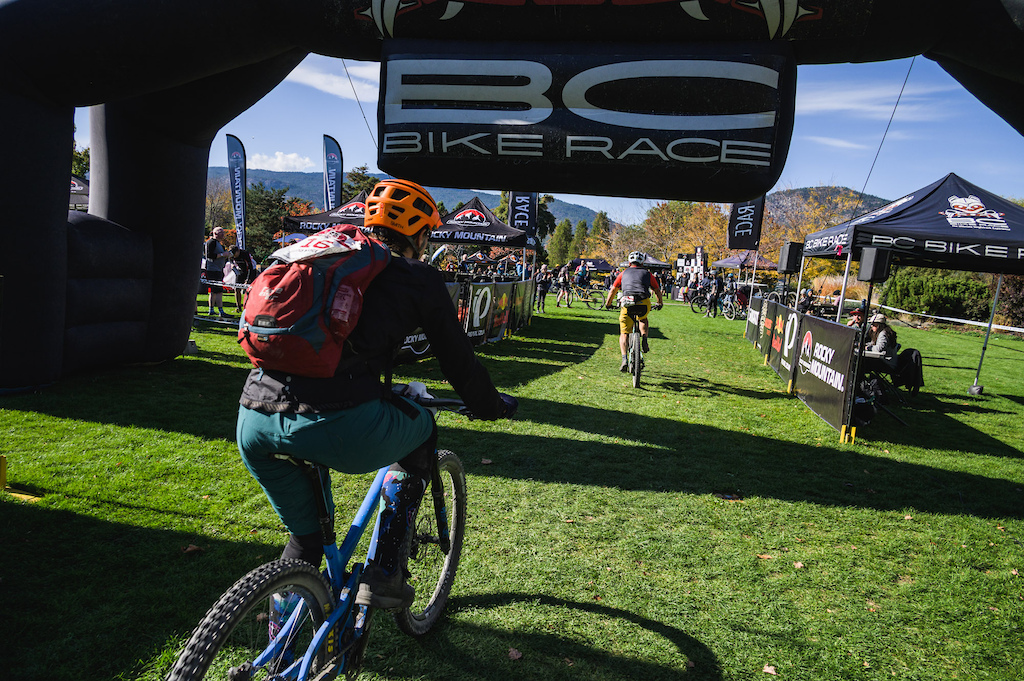 In conclusion, this BC Bike Race 2021 has been an amazing race in an amazing new location, Penticton and the South Okanagan. Surrounded by the brilliant fall colours and a festive spirit, the racers have all rallied to get back to what we love, mountain bike competition. But it was the final riders who crossed the finish line after 7.5 hours, after the awards, late in the day, who got the biggest applause! We are all here as a community to do what we love, crank the pedals, smash the berms, and high-five all the efforts of each and every human achievement in the “Ultimate Singletrack Experience!” 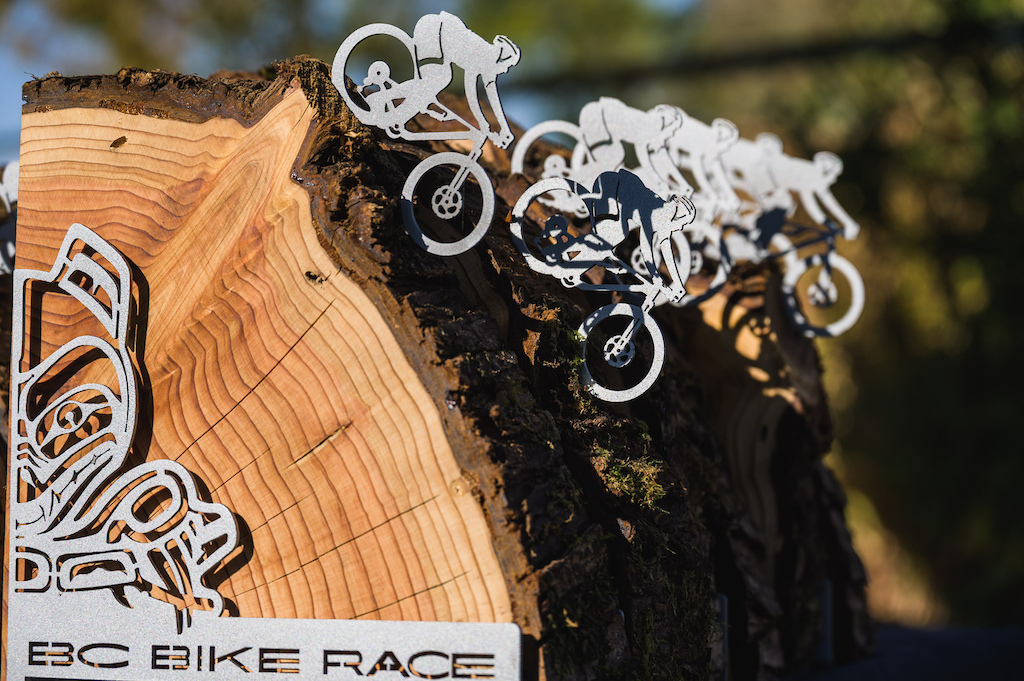 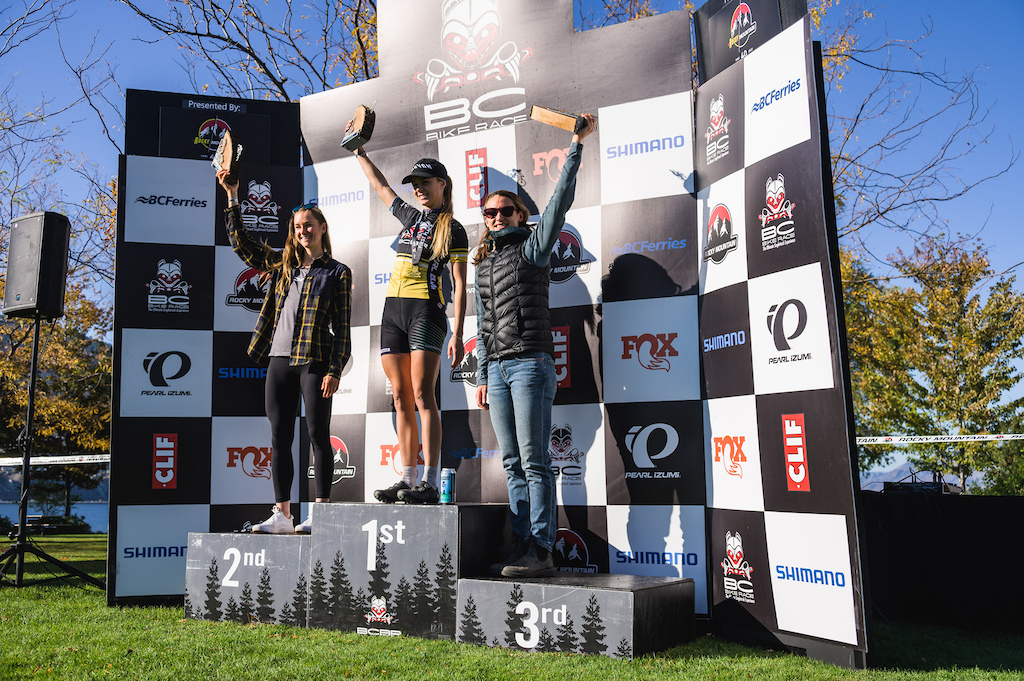 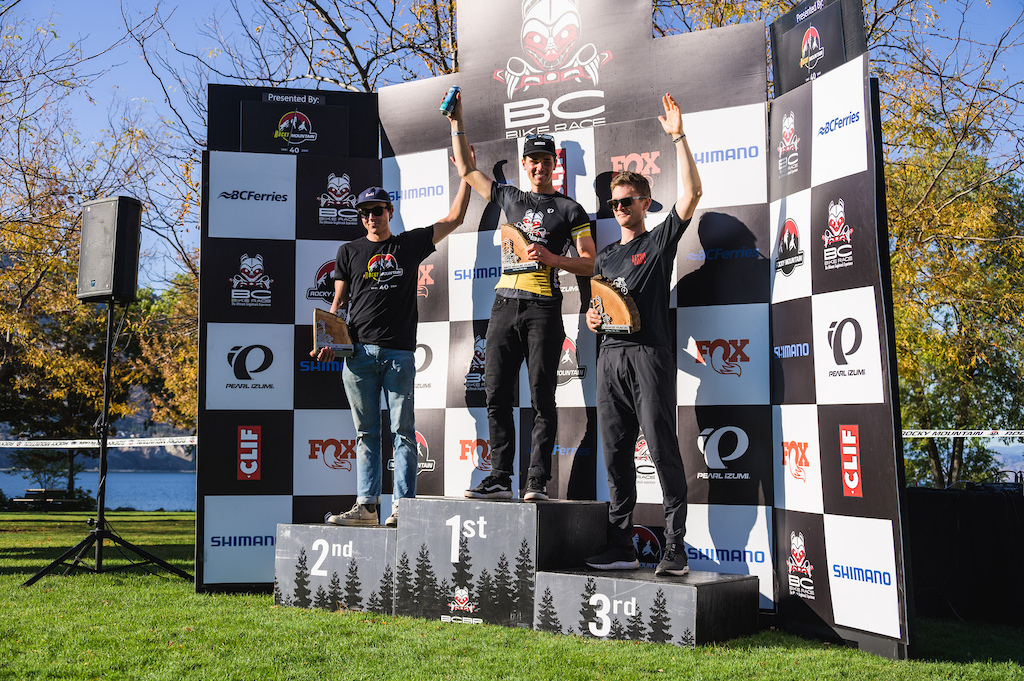 Special Treat Today – A Race within a Race

Recognizing the fastest 3 Women and fastest 3 Men on the final 2km’s of todays route.

I hope they make portable AEDs small enough to fit in downtube storage containers by then… I’m gonna need one.

For solo riders there is a 60+ category

Hope they come back next year and crush it. That way Pinkbike can make jokes about Phoenixs rising from the ashes…

Thorinjames (Jun 8, 2022 at 0:17)
Can anybody speak to the new format compared to the previous when the event was held in North Van? I am thinking of signing up for 2022. Having participated in 2016, the experience was perhaps unparalleled with camping, catered meals and organized transportation. The new format seems more like, well just a race...

Jordansemailaddress (Oct 9, 2021 at 17:00)
I would love to see some POV footage from some of the racers in that lead group over the last couple stages! Sounds like it was quite an epic battle!