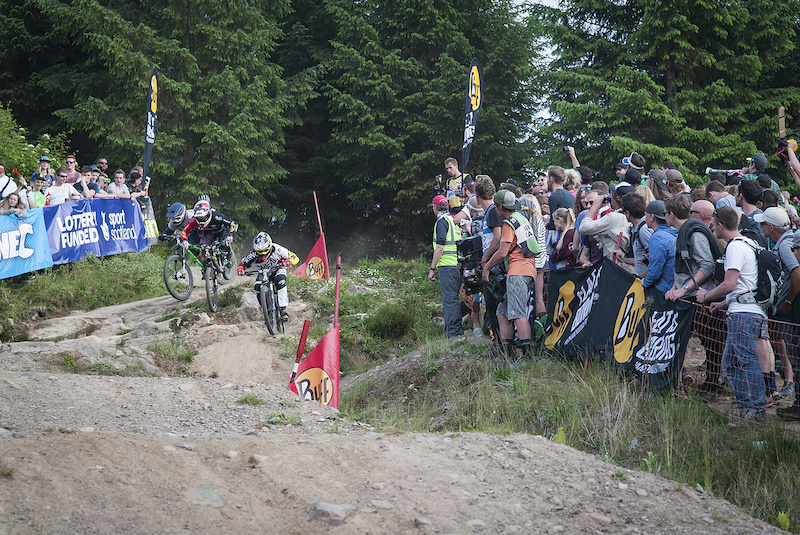 Saturday 4th June saw the 2016 4X ProTour roll into Fort William, Scotland for round 3 of the 2016 tour. The iconic 4X venue in Scotland has seen some of the most spectacular 4X races in history and in 2016, there would be plenty more drama... 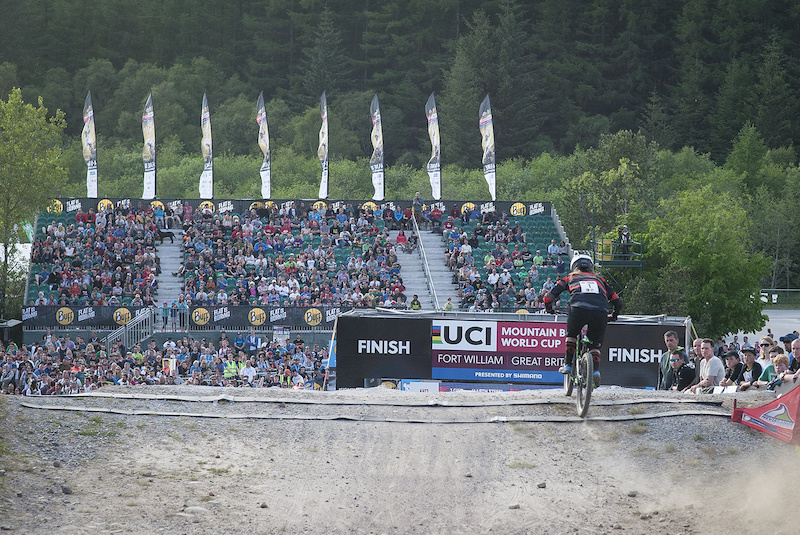 The track looked immaculate. The team at Fort William had done an amazing job of getting it ready and it looked better than ever.

The weather was perfect all week and although the forecast had predicted the sunshine, in the highlands, you can never be too sure. The signs were good and on the drive to Fort William, the river beds in Glencoe were dry, the lay-bys were dusty and it looked like the forecasters had the weather predictions bang on. Blue skies and no clouds gave the riders and spectators perfect conditions for practice and qualifying. 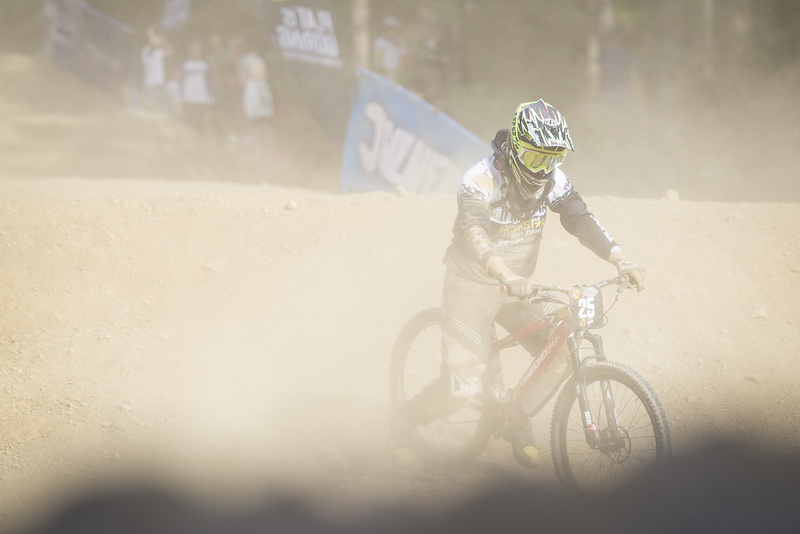 Practice started on Thursday with riders getting used to the dusty conditions and working on their lines. The biggest obstacle to conquer was a new rock gap that had been created. Hoping over rocks then bucking a 20-foot gap took precision and nerve, but amazingly quite a few riders were nailing this section smoothly. 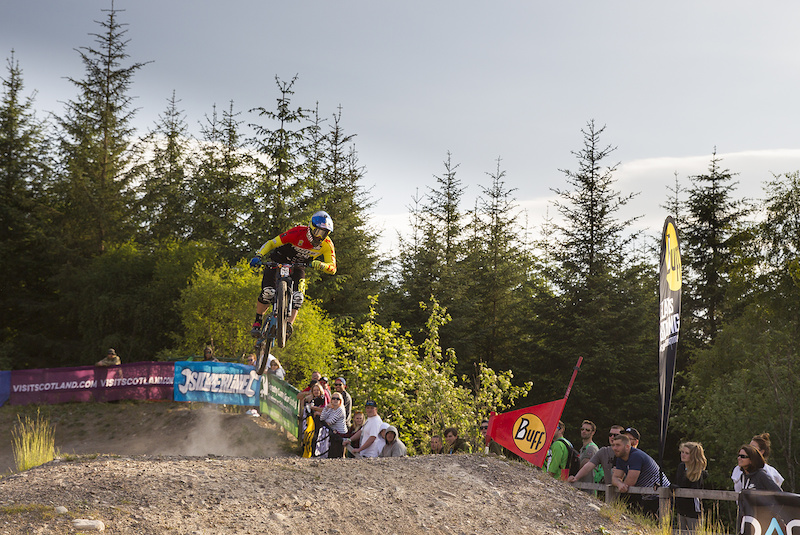 On Friday, there was a second practice session followed by qualifying. Going in reverse order of world rankings and starting with the women, qualifying got underway...

It was great to see Steffi Marth racing 4X again. As the World Championship Bronze medalist from 2015, she was certainly the favourite for this event, but could one of the British women challenge her? Hannah Escott rode a great lap that would ultimately place her in third position whilst 4X newbie, Monet Adams, provided the qualifying ride of the day! In her first ever 4X event she rode amazing and qualified in a highly credible second place. Steffi Marth was the fastest though and would head into the finals on Saturday with the all-important gate pick. 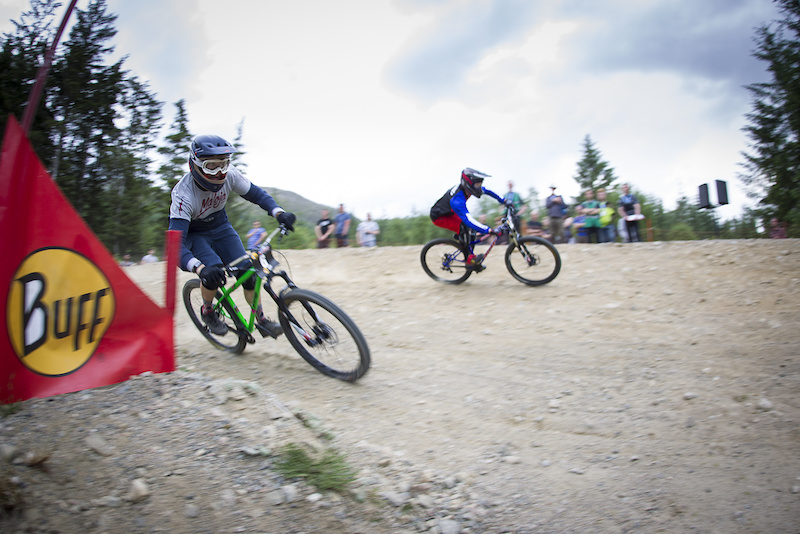 Next up were the men. Will Evans got the home crowd shouting as he took the hot seat early on. Alex Metcalfe then took the fastest time, and it looked like being a solid time until Quentin Derbier set an amazing time. Jumping the triple was clearly the fastest line. Next up, Felix Beckeman was on a flier crossing the finish line, setting the fastest time. Tomas Slavik then went even quicker taking a second off Felix time. The final rider on course, Scott Beaumont, looked on it but a slip before the triple lost him valuable time, crossing the line in fourth. 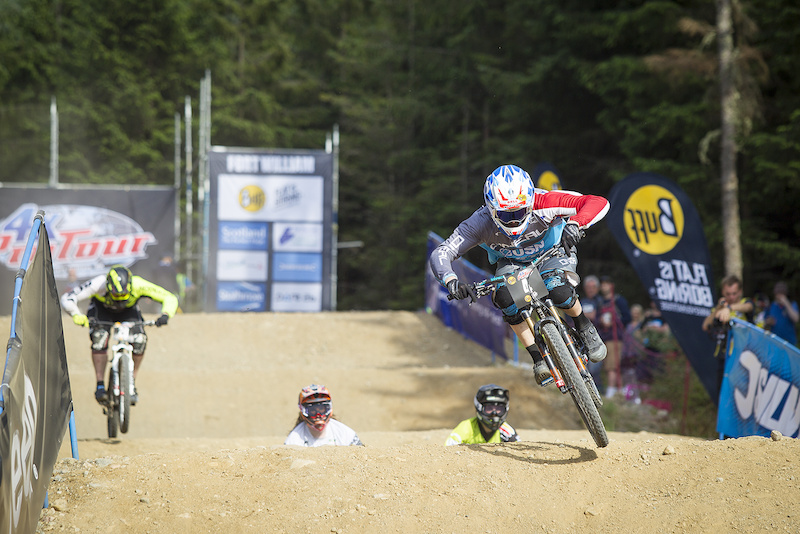 On Saturday, we saw huge crowds, blue skies, and the scene was set for a great night of 4X. Fort William has never failed to deliver and in 2016 it produced some of the best 4X racing ever seen in the Highlands.

In the men's race, there was an early exit for Germany’s Tom Scherer and Denny Tischendorf. Ninth qualifier, Luke Cryer, made an early exit in the quarterfinals as did countrymen Martin Ogden, Duncan Ferris and fifth seed Alex Metcalfe. 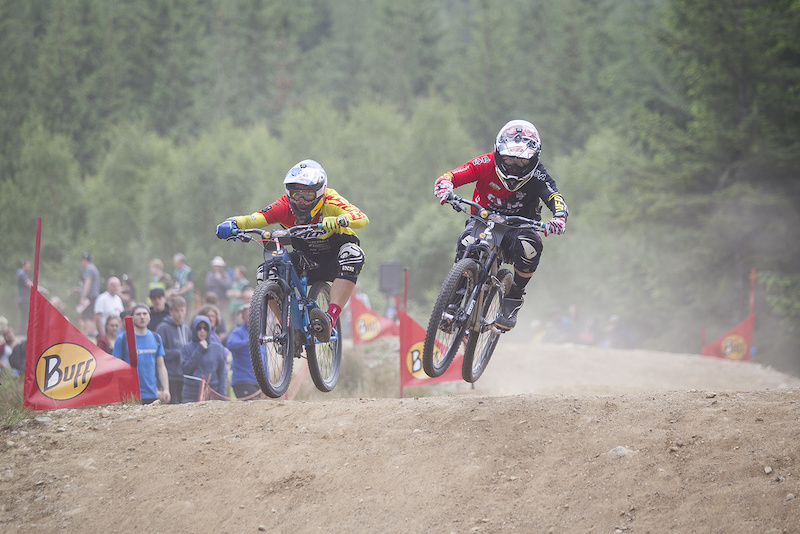 On to the semi-finals. In semi-final 1, Tomas Slavik took gate 2, Scott Beaumont 3, Bogdan Bondor took 1 and Joe Malinson on 4. The gate dropped and Slavik took the holeshot with Beaumont close behind. These two rode a great lap and pulled away to qualify themselves into the final. 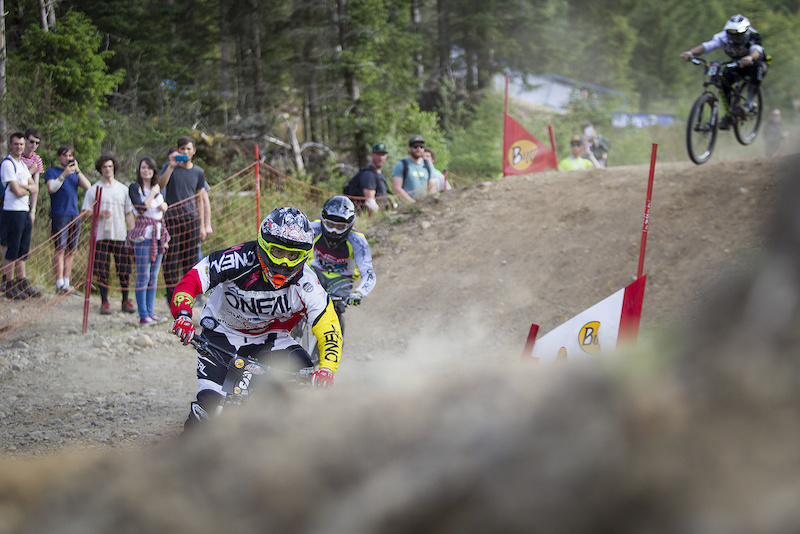 In semi-final 2, Felix Beckeman took 2, Quentin Derbier took 1, Benedikt Last in 3 and Will Evans in 4. As the gate dropped it was Beckeman and Derbier in a drag race down the first straight. Derbier took the lead in turn 1 with Beckeman in 2 and Last moved into 3rd. At the top of the rock section, the drama unfolded. Last had a puncture and was out which allowed Evans a clear run after Beckeman. In the last turn, Evans dived inside and almost made the pass but it was not to be. Derbier and Beckeman transferred into the finals. 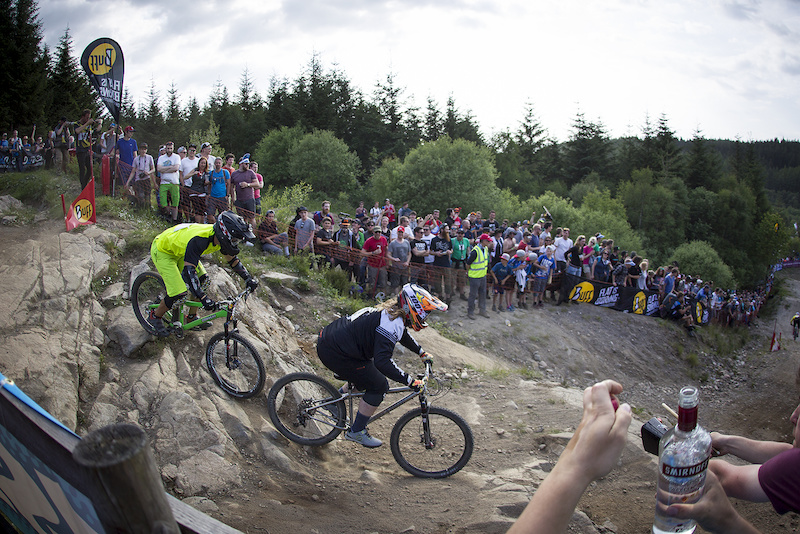 In the small final Last claimed 5th position for the night after another amazing battle involving Will Evans who came home in a career-best 6th, with Bondor in 7th and Mallinson in 8th.

So it was time for the main finals... 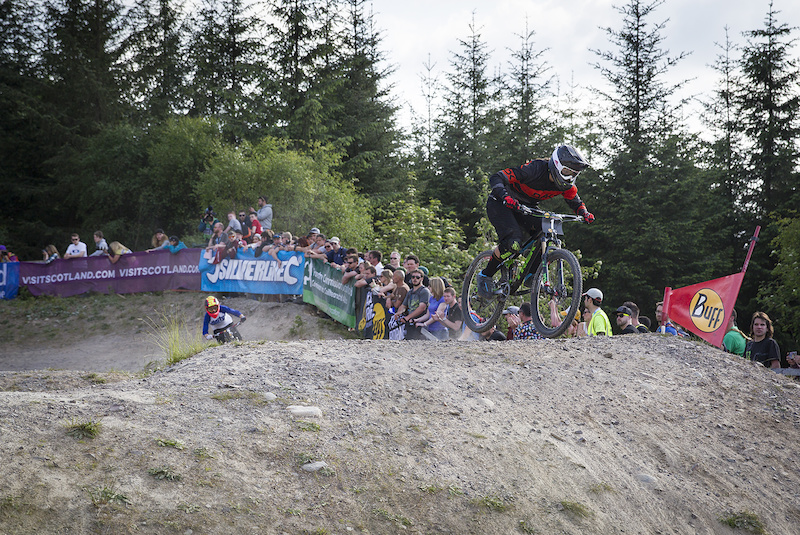 In the women's, it was Steffi Marth on gate 1, Monet Adams on 2, Hannah Escott on 3 and Amanda Tanfield on 4. The gate dropped and Marth made the snap and led into turn 1. Adams was in 2nd but Escott, riding her full suspension bike was starting to make a challenge. Through the rocks, though, Adams got a cleaner line and pulled a little gap. At the finish line, it was Marth, Adams, Escott then Tanfield.

In the men's, Tomas Slavik took gate 2, Felix Beckeman took 1, Quentin Derbier then chose 3 leaving Scott Beaumont in 4. The British crowd was going wild and as the gate dropped, the 4 riders fired down the first straight. Tomas Slavik won the drag race to turn 1. Derbier and Beaumont battled wide on the first turn and down the 2nd straight which helped them to catch Beckeman. Into the rocks and all 3 riders collided with Derbier being the beneficiary. Beckeman then punctured on the exit of the rocks and Beaumont moved into third. Slavik held onto the finish to claim the win ahead of Derbier and Beaumont with a literally deflated Beckeman rolling across the line in fourth. 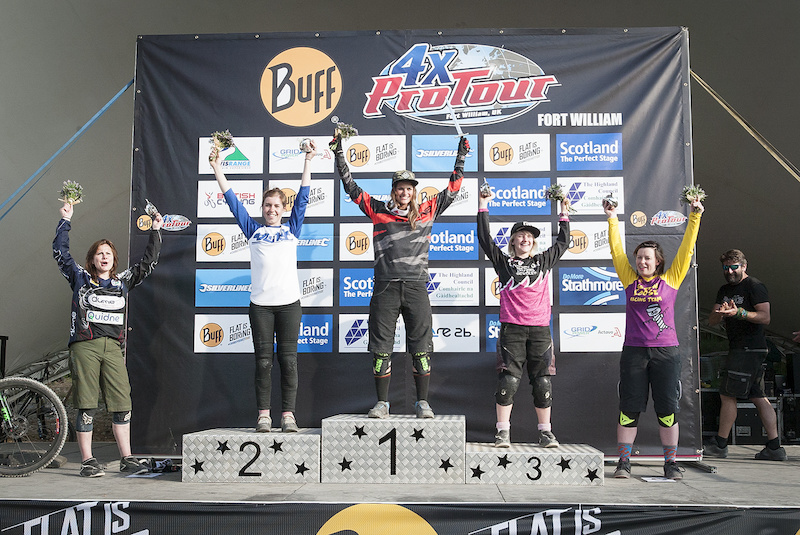 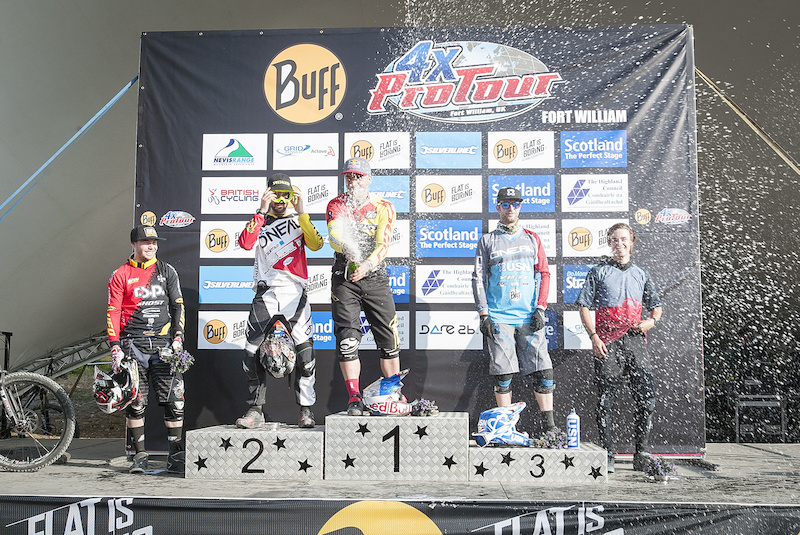 A fantastic night of racing that was appreciated by the thousands of fans in Fort William as well as the much more who watched the live broadcast over the internet. A great display of 4X racing on one of the best tracks in the world.

Look out for the Pinkbike Video out later this week. 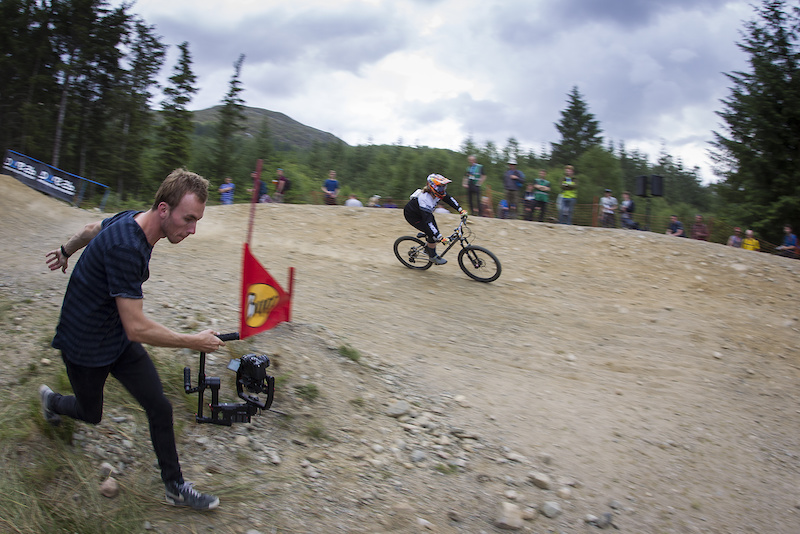 Round 4 of the 4X ProTour will take place on 16th July in Jablonec, the Czech Republic at Tomas Slavik’s home track. With 2 wins so far in 2016, you would be a fool to bet against him, but without a doubt, the other riders will be working hard between now and then to try and win in JBC bike park.

For more information on the 4X ProTour, please visit:

ajayflex (Jun 7, 2016 at 6:28)
Sounds like great racing. Its a real shame that series is not paired with the dh circuit and coverage. Remember the days of yor when Peaty, Minaar, Gracia and Hannah would duke it out on the 4x, then smoke DH on the same weekend!

partsengineeringbikes (Jun 7, 2016 at 8:56)
bike checks please! I want to see all the sweet 26" wheels and 135mm hubs. Not to mention what frames people are racing now that many of the big manufacturers don't make a 4x/DJ frames because of their wheel size.

thestigmk1 (Jun 7, 2016 at 5:49)
Awesome to be up racing this weekend. 4X goes from strength to strength and the crowd this year really showed it. Absolutely deafening through the whole course. I'm so glad I swapped from Dh racing to 4X this year. I'd say to anyone to come try a British National Round on any bike you have. Everyone is so welcoming and you will have the biggest smile by the end of the weekend.

brooce (Jun 7, 2016 at 10:40)
Awesome event, cool roundup - can't wait for more photos! But why didn't it appear at the top of the news stack from today, but was immediately hidden somewhere lower? Come on Pinkbike, I wouldn't call it a fair play! Been browsing through the main page a few times today and at no time was it anywhere near the top.