Race Report: Downhill in a Farmer's Field as Northern Downhill Ends the Drought at Eastgate 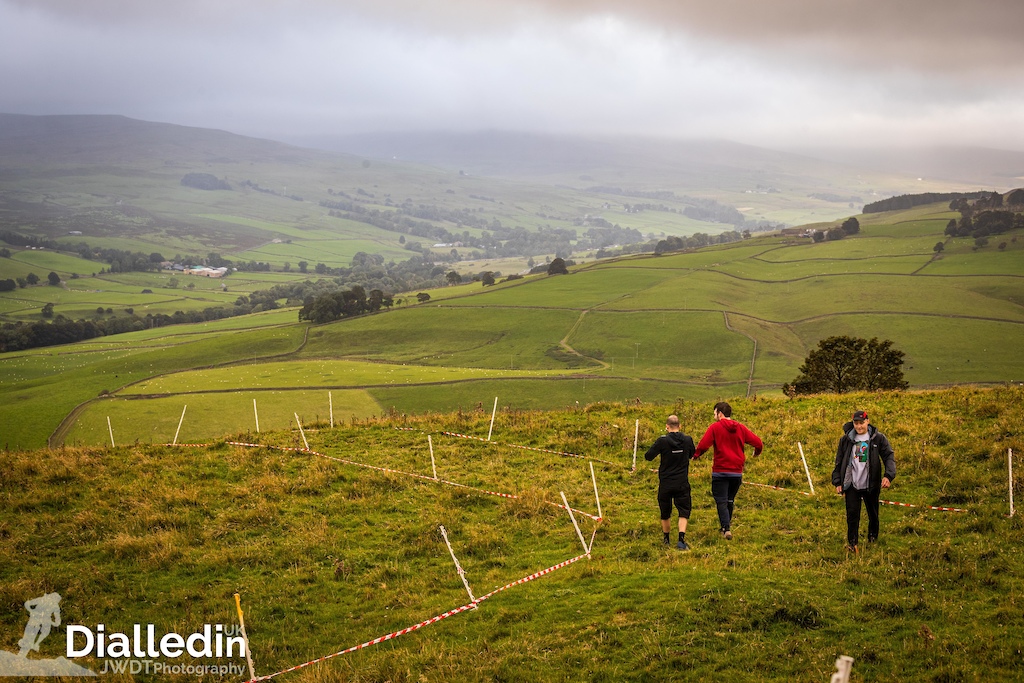 Racers walking the course in Eastgate, County Durham and within the beautiful Weardale rolling hills. Population approx. 170
It's been one hell of a challenging year for Carl and his Northern Downhill crew. Hosting 4 events this year, 3 of which in some very difficult circumstances. The TT in Ae forest in February was touch and go due to severe storms, but Carl held his nerve and an almost miraculous slither of finer weather ensured the event went ahead. The Chopwell funduro was literally days before the UK went into a complete lockdown due to that unmentionable virus, and now this weekend Carl went ahead and achieved what many thought couldn't be possible. He hosted another TT at Eastgate, an event located on privately owned farmers land, with one hell of a hill. 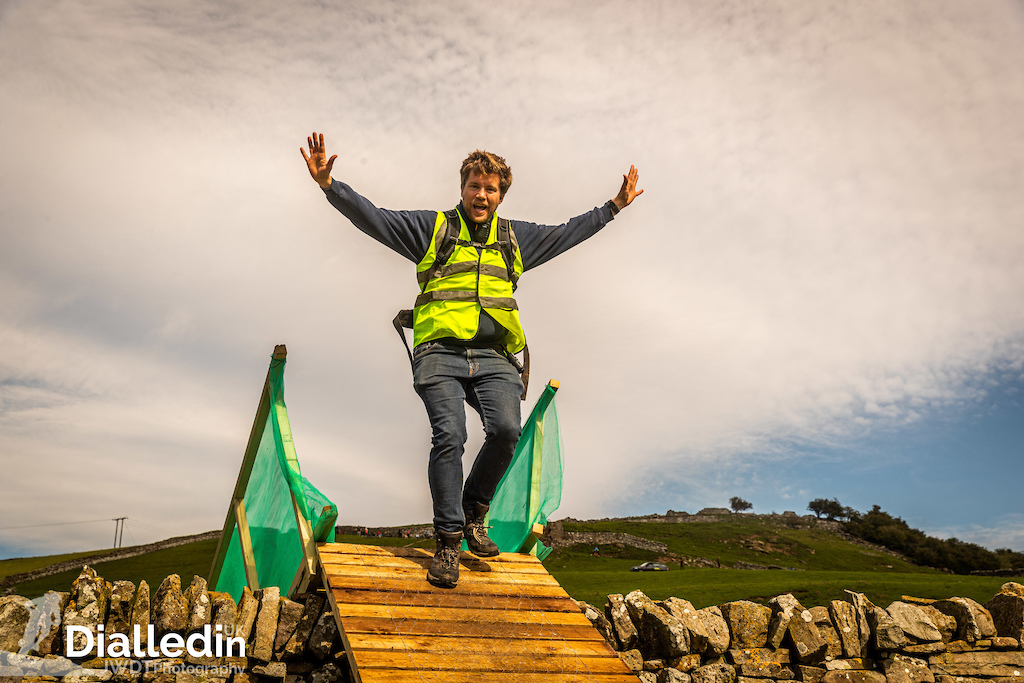 Carl Davison "We can race again!", clearly looked stoked all day as 140+ riders were able to race
Eastgate is located in the beautiful rolling hills of Weardale, the immediate surrounding areas were where Beowulf: Return to the Shieldlands was filmed. Why here? Because in the UK event organisers are being forced to seek privately owned land instead of Forestry England land, due to an influx of "staycation" families using the forests. With a maximum of 30 people allowed to be involved in an event in Forestry land, including medics, marshals and organisers, it's simply futile to even consider hosting events in the Forestry England areas. 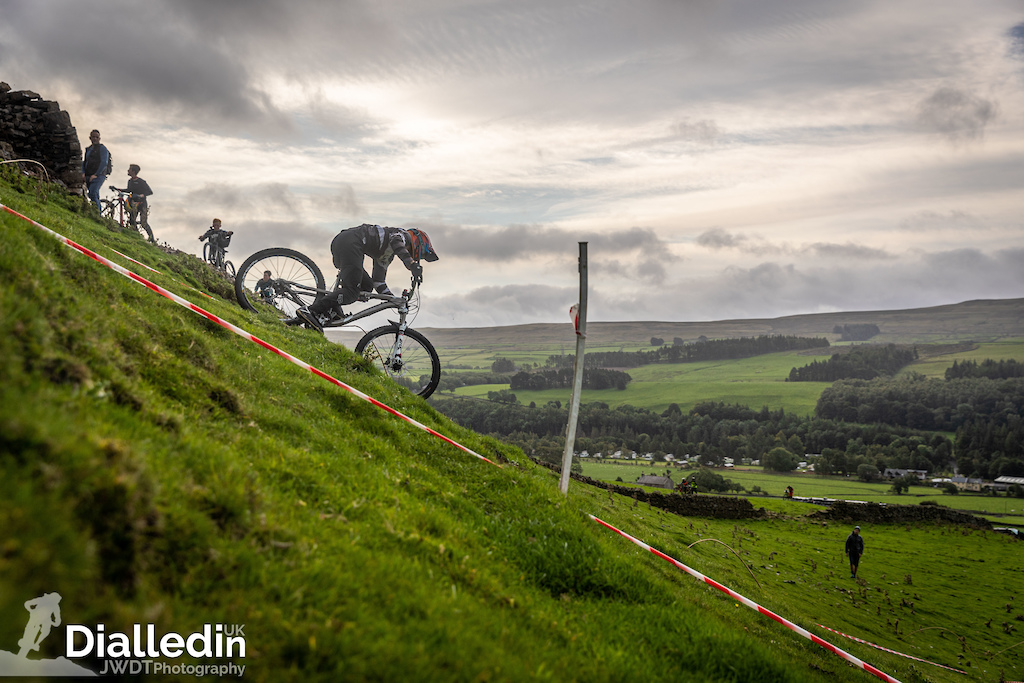 It may have been racing in a farmers field, but Carl and the crew ensured there were some spicy sections
The TT is is similar to a downhill race. Riders get a chance to walk the track, then practice for a couple of hours before their 2 timed race runs. This particular event is suitable for first time racers, the course was not overly technical, but line choice and controlling the large wooden senders that take riders over the walls needed careful speed, or end up in orbit! 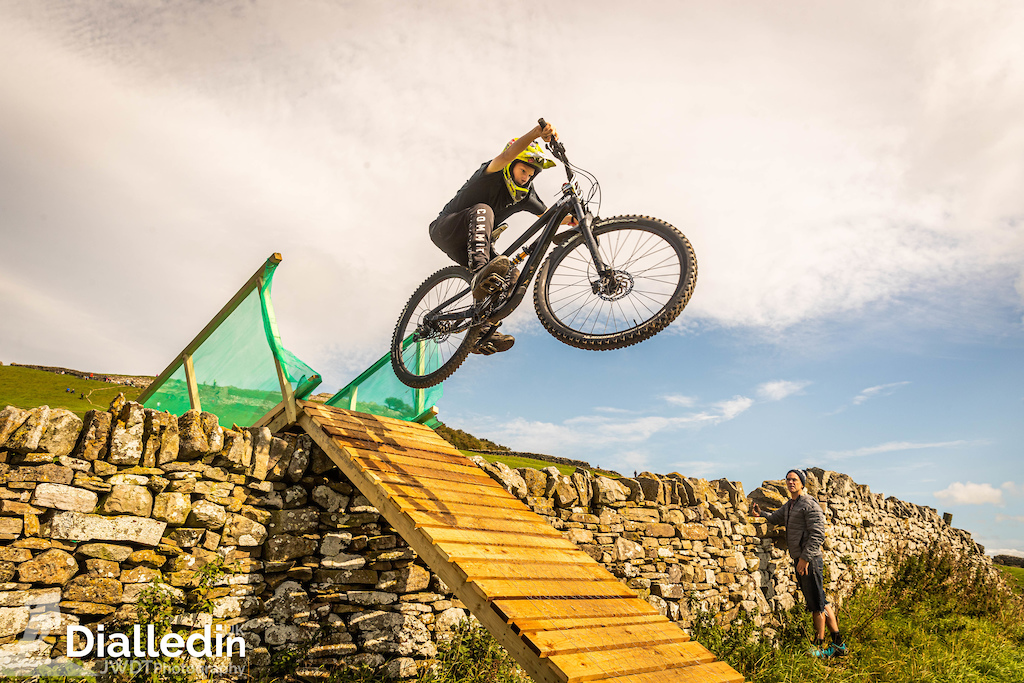 Harry James, and we have lift off! 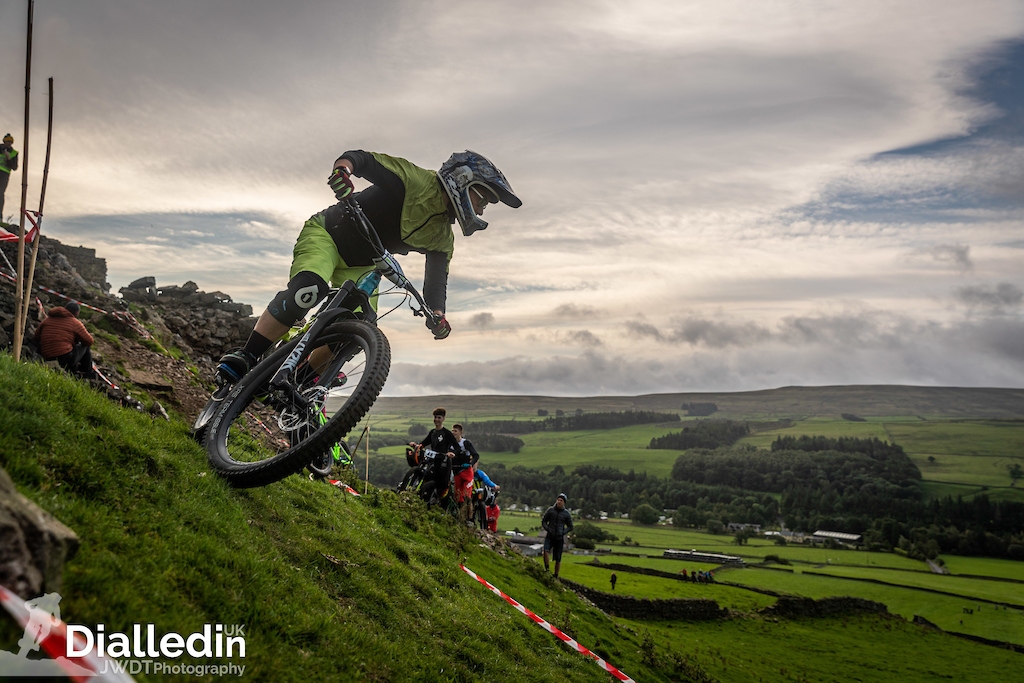 Weardale isn't a new venue for Northern Downhill, they first entertained racers like Scott Mears and Helen Gaskell way back in 2009. This TT almost has a 1990s downhill race feeling to it, getting from the top to the bottom of a large farmers field in breakneck speed. Do not think for one moment that this is like a football field, the land is extremely rugged and lumpy. Put in flat, foot out flat out turns, wood jumps, rocky gravel chutes and you had a pretty gnarly course. Any bike can be entered into the event, this weekend we had 100mm travel XC bikes, full on downhill rigs and even an ebike category. This is what makes this such an accessible race, from complete novices to serious expert racers. Talking to many of the riders, they were desperate to get some racing done, and this was the perfect chance. 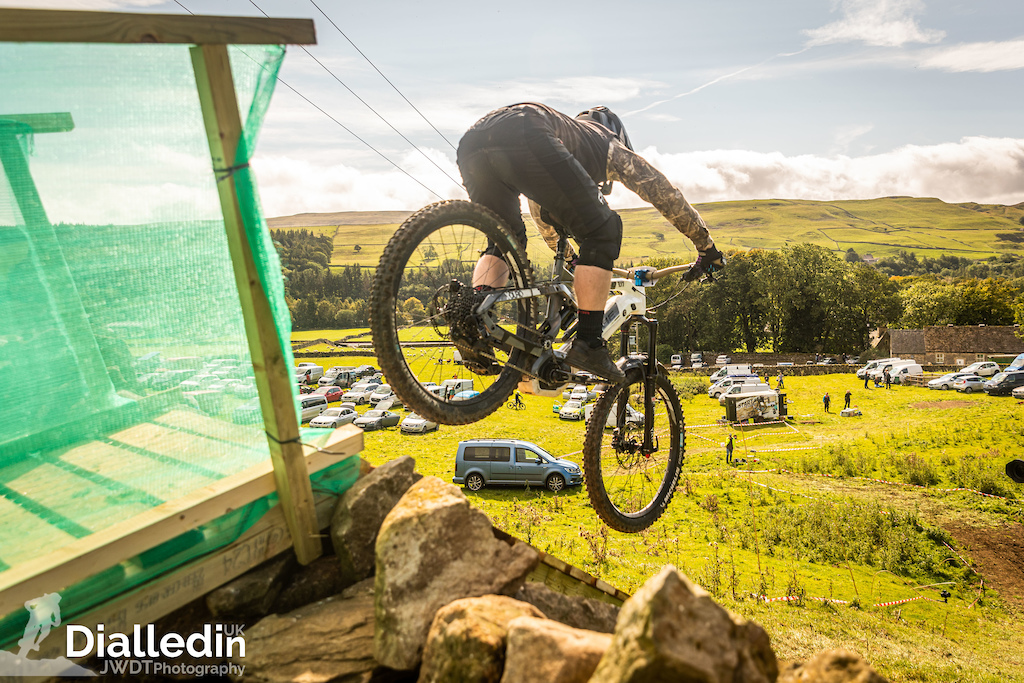 Ebike category had 6 out of 142 racers in it 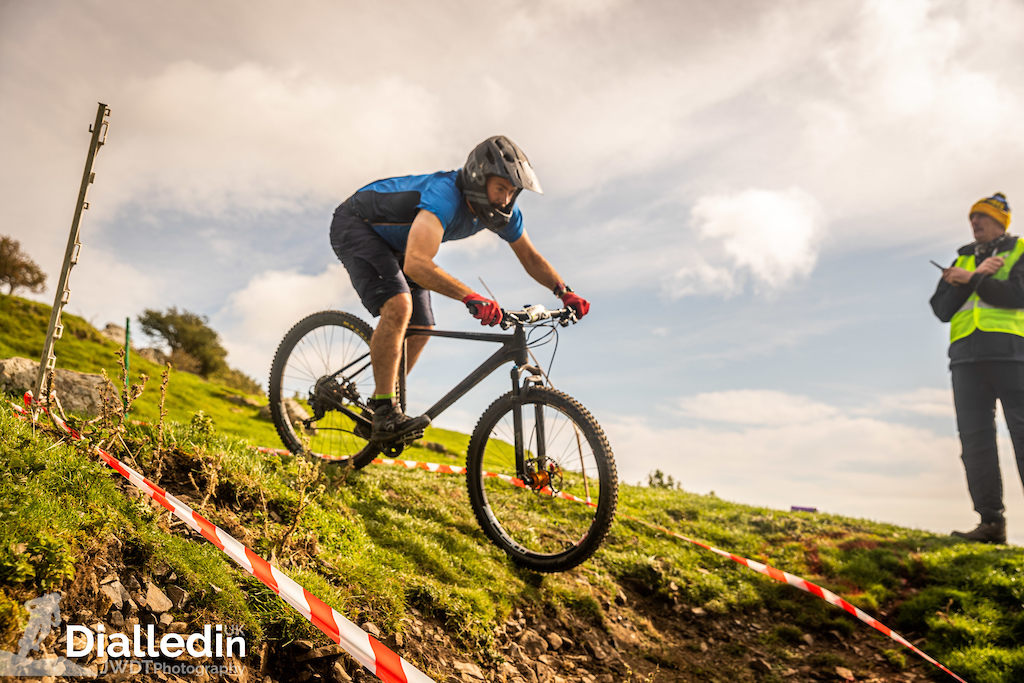 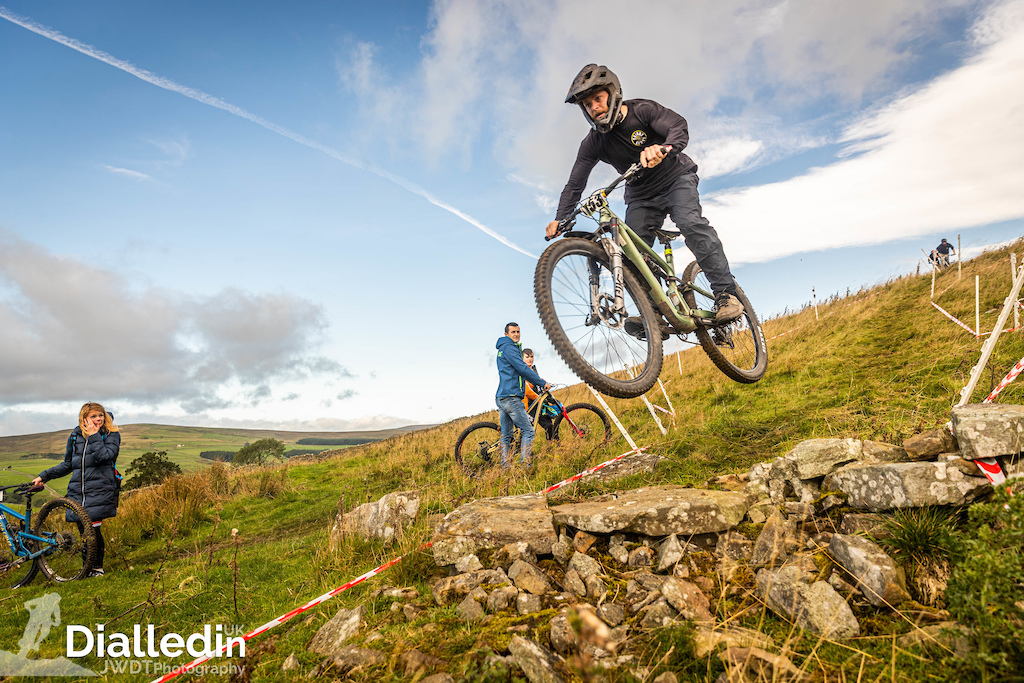 James Tunn pre-jumping one of the wall crossings
In the women's race there was a total of 8 competitors and Sarah Newman took the fastest time in 2:18.20. Sarah is somewhat of a seasoned racer but has been quiet for 5 years, in fact she too raced here in the 2009 race. Second fastest went to Hollie Vayro in 2:32.19, Hollie is definitely one to watch in the future of the sport, and finally 3rd fastest woman went to Anna Fenwick in 2:36.19. Both men and women top 3 riders recorded their fastest times on their second race runs. 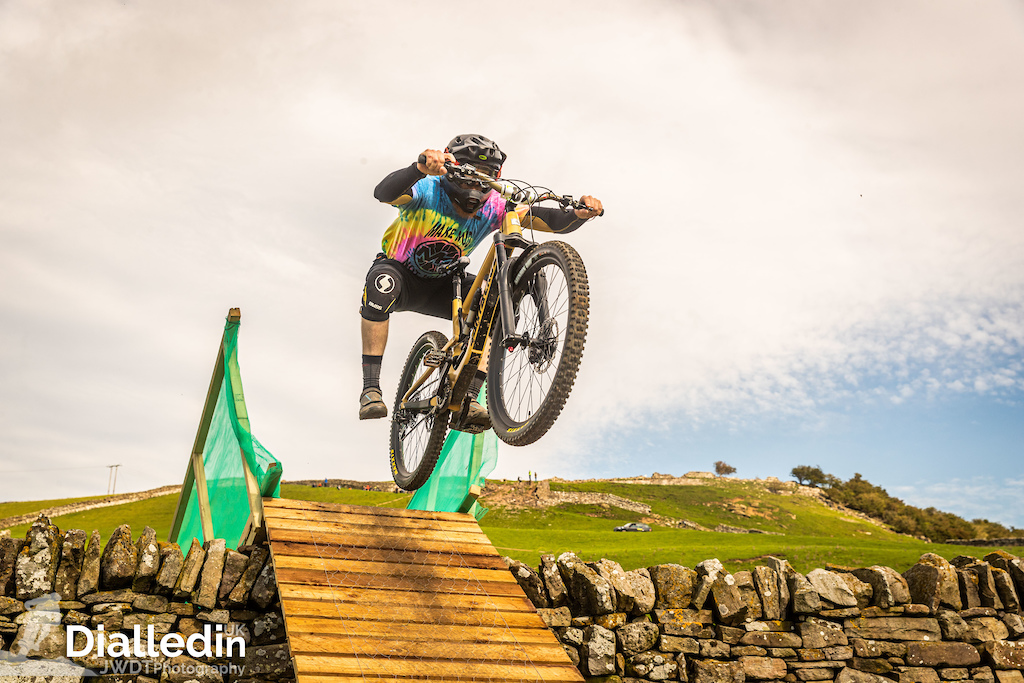 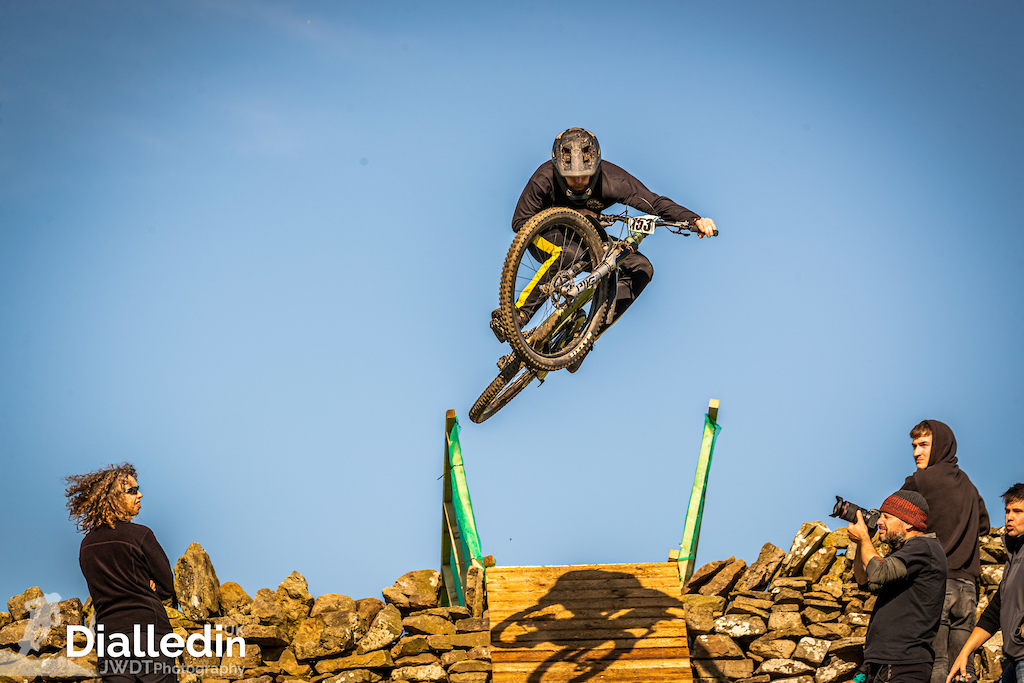 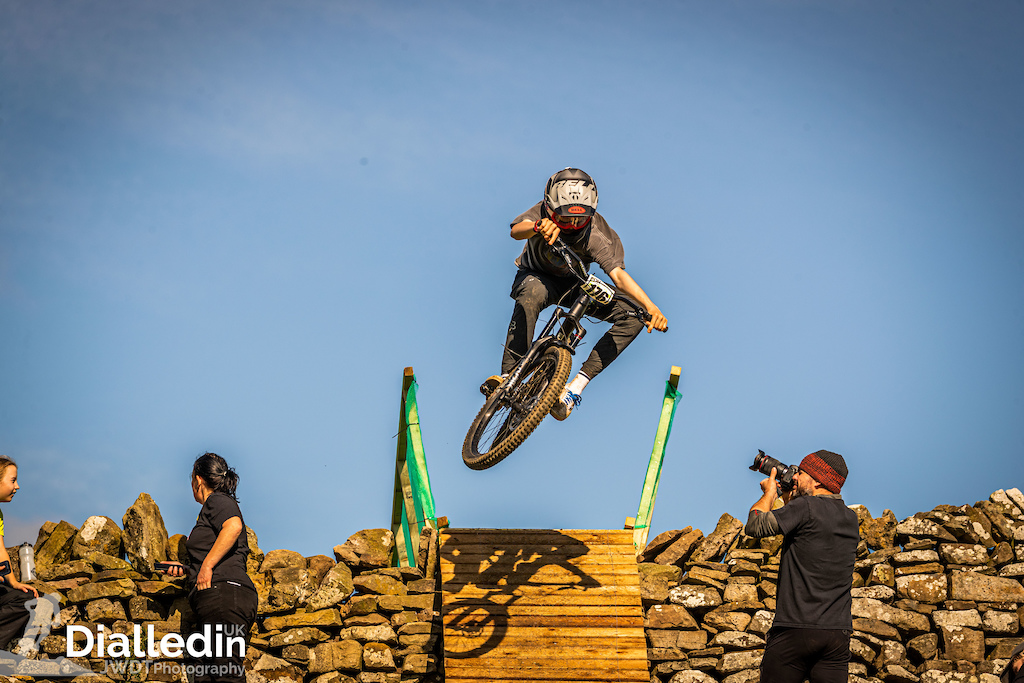 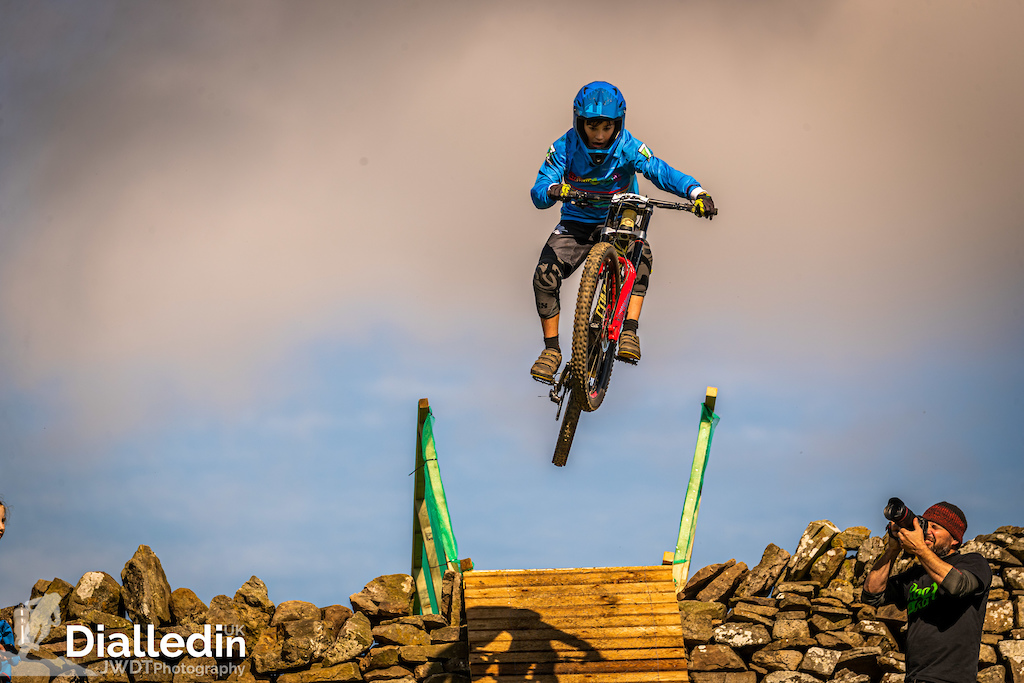 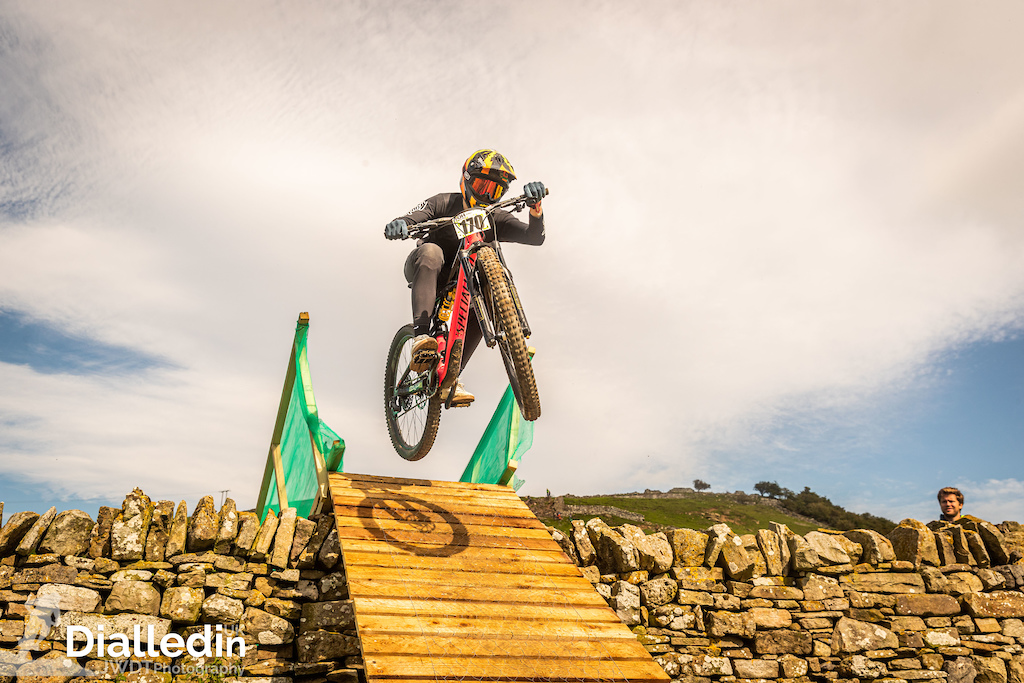 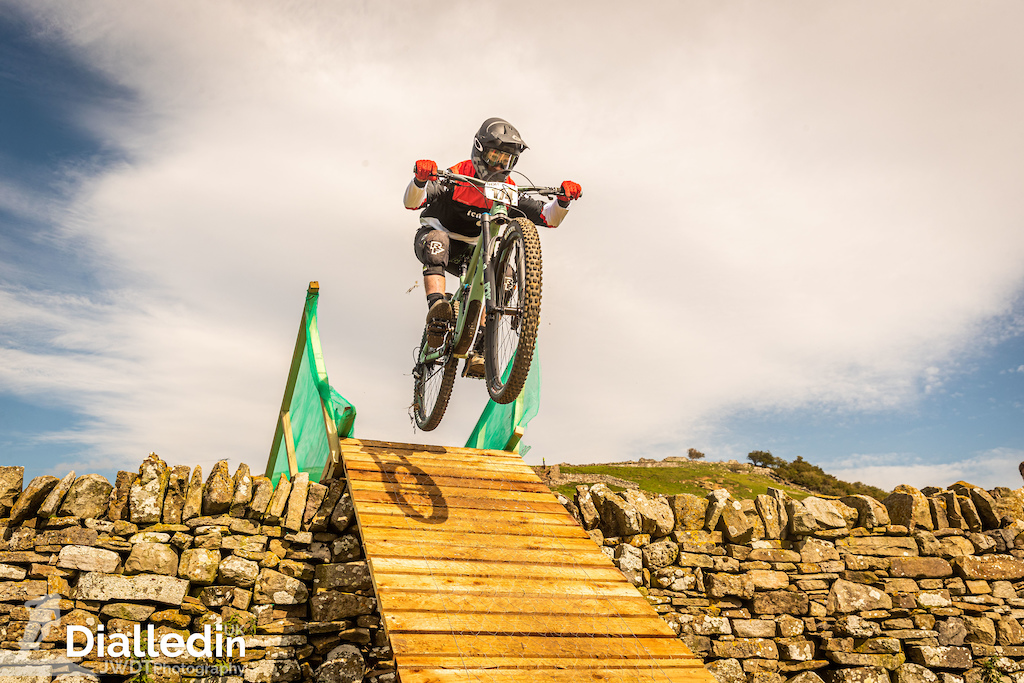 This was one hell of a well received race, people were buzzing to be back racing. You could see the effort the organisers had put into this race. Things still are not back to normal by a long way, so online sign-on the night before and specific time slots to pick up your timing chips was the way forward, and again talking to some of the riders, was perfectly put into place. It was also great to catch up with Carl (NDH) and Barry (Cold Brew Events), who have joined forces to bring us all some of the best upcoming events in the future. For more information and to keep up to date on these two organisers head over to Northern Downhill and Cold Brew Events Facebook pages. Both organisers have websites that can be found at these links Cold Brew and Northern Downhill

That's it for this report, the race euphoria is still strong and it's clear, despite the tough year, that riders are super keen to get between the tape. A huge shout out to Carl and Barry for keeping their nerve and giving the North East a well received chance to race. Keep a watch out on their pages for more upcoming events, there's certain some cunning plans in the future! 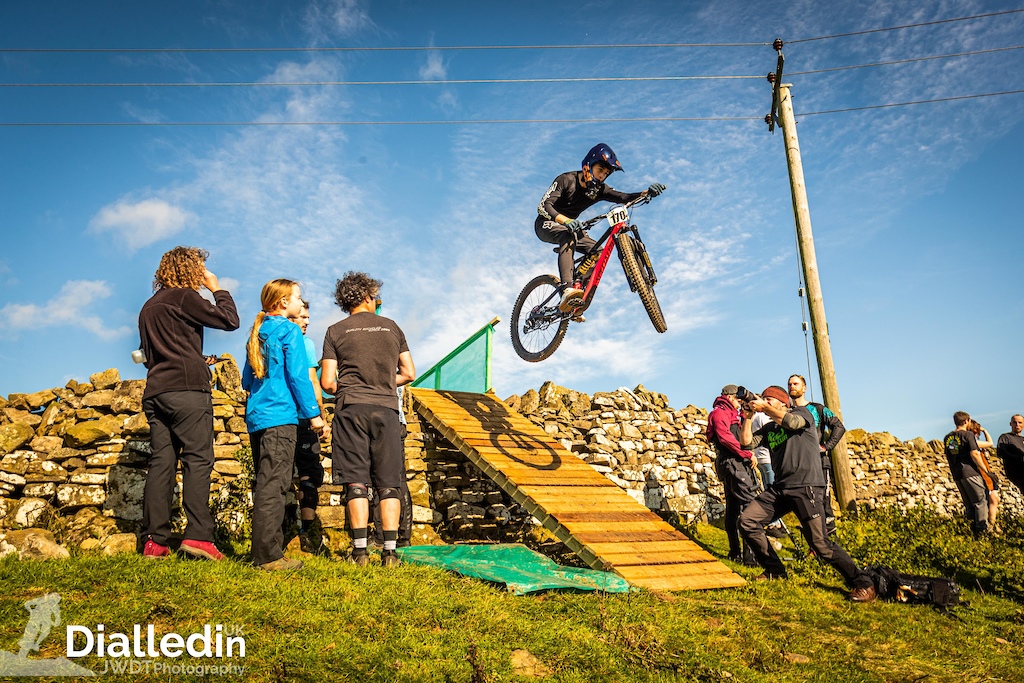 Jon Morley, 1st in 13-14 boys and a highly respectable 22nd overall. We need to be watching out for this one!! 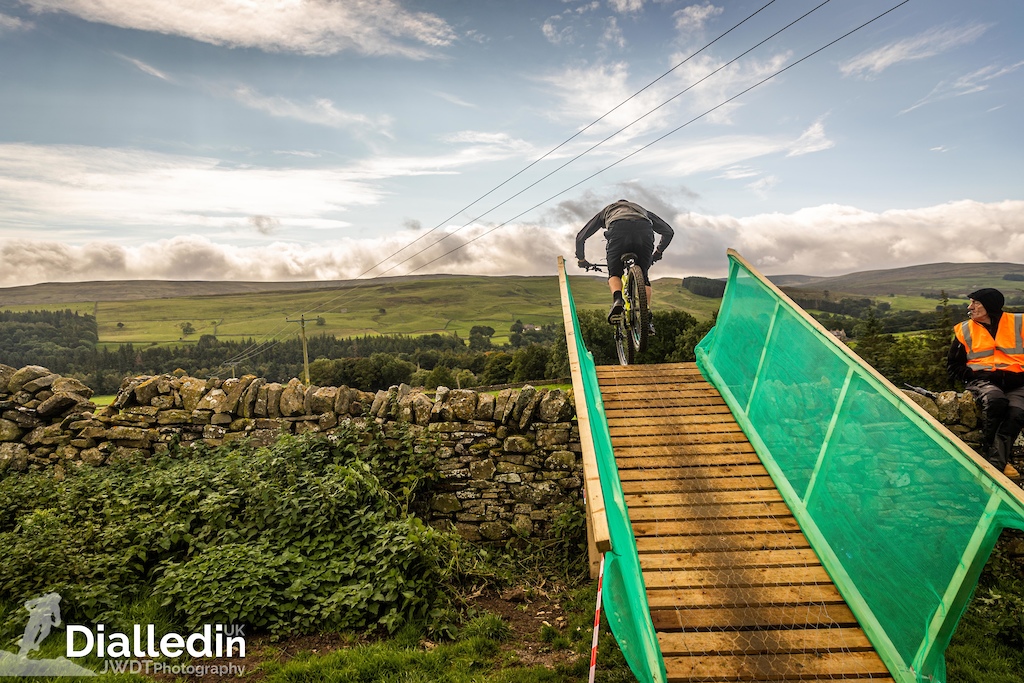 Negotiate this jump or land to flat and lose valuable time 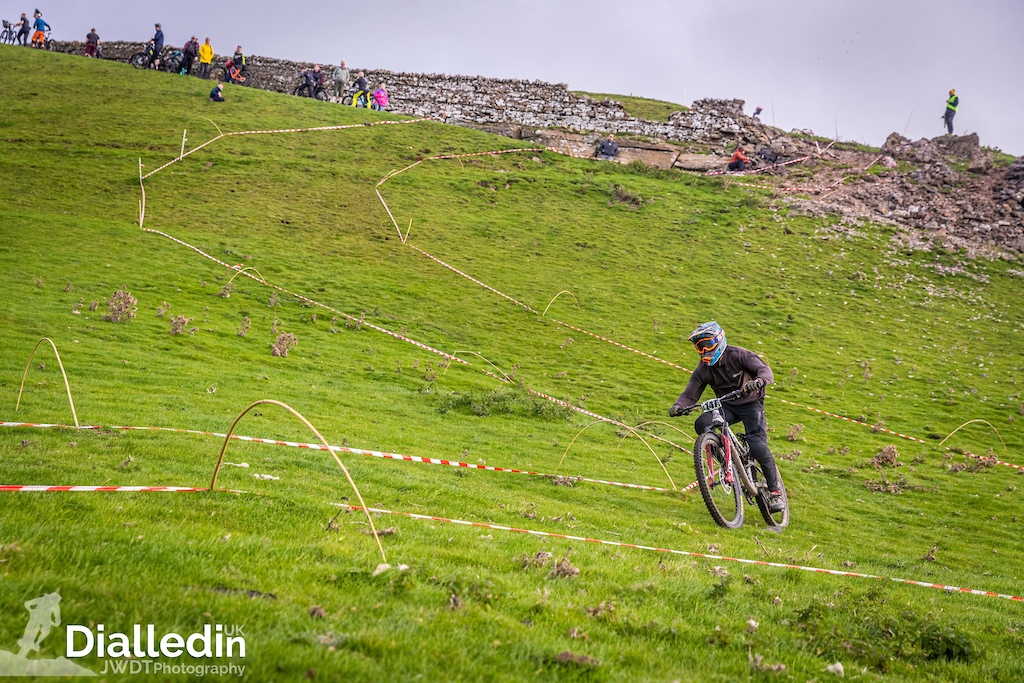 Flat and tight steep turns, thankfully dried out through the day after a morning of light dew
Words and photos brought to you by @JWDTphotography