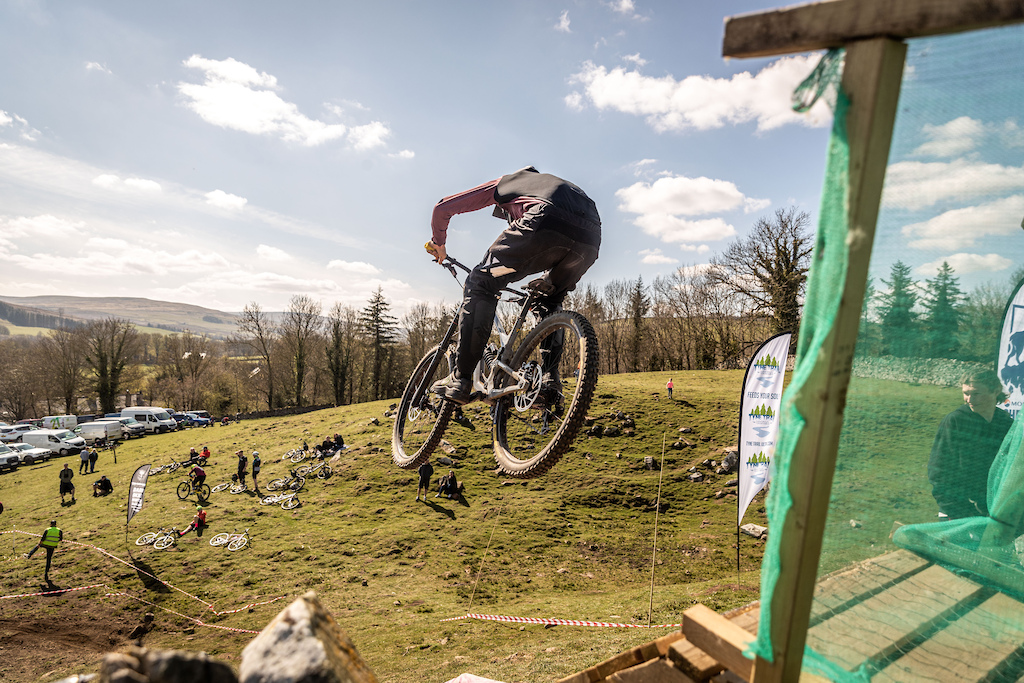 Well, that was one hell of a weekend. At last we can go racing again, and it was blatantly clear that there is a thirst to get between the tapes. Northern Downhill, supported by Start Fitness and Powerbikes UK put on 2 races over the weekend. Saturday saw their first-ever e-MTB only race and Sunday it was back to the Northern Downhill’s specialty of a TT race. 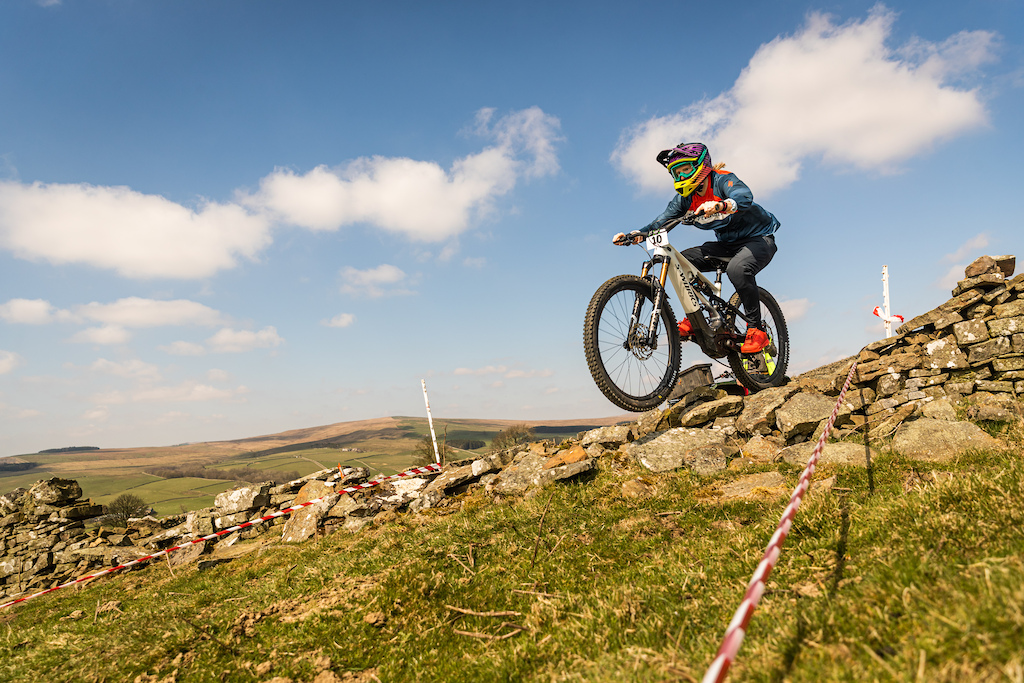 Helen Gaskell put in an incredible performance after nearly 2 years away
Saturday was all about the e-MTBs. Love them or hate them, they are here to stay and becoming more and more popular. Let’s face it, who doesn’t like powering up a hill with assistance? And then doing it time and time again and getting in more downhill runs. That was the order for the day on Saturday, with a slightly different course for the e-MTBs, Carl and his crew had put in some uphill lines and rough, rocky sections that would have sapped any non-assisted bike's speed and flow. 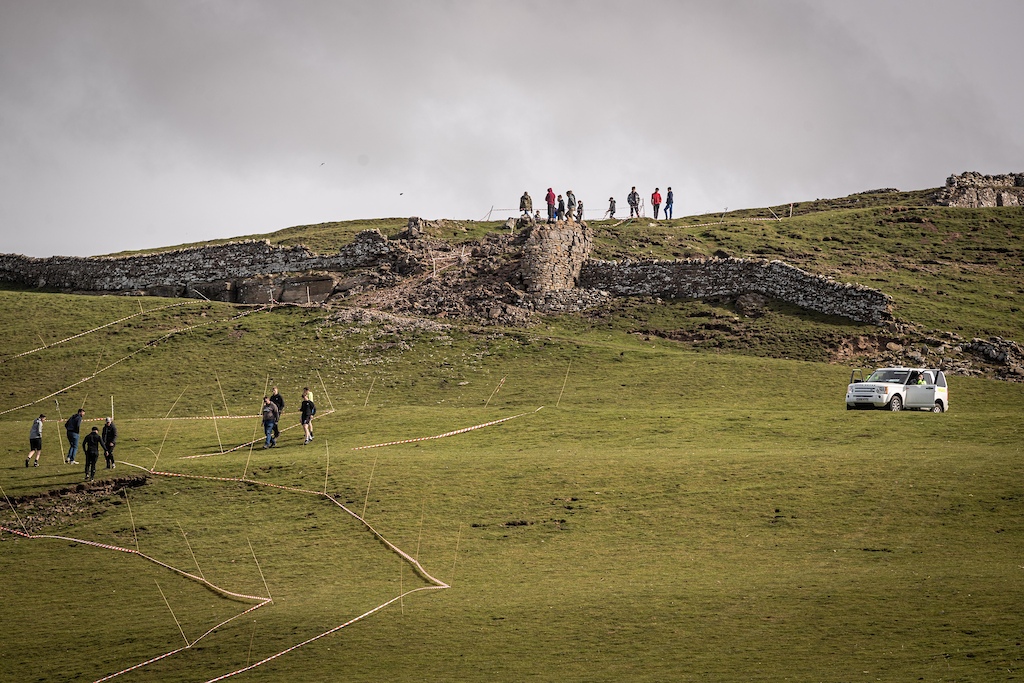 Track walk, and realising it's some hike
Eastgate itself is a small village set in the UNESCO Weardale area of the North East, the course itself, basically a farmer’s fields with an approximate elevation of 600ft and a course of about 0.92 miles (Estimated using Strava). The course itself zigzagged down a rough and lumpy field, over broken stone walls, woodwork jumps and rocks and boulders. Throw in a loose gravel chute and off-camber sections, this course had a bit of everything. 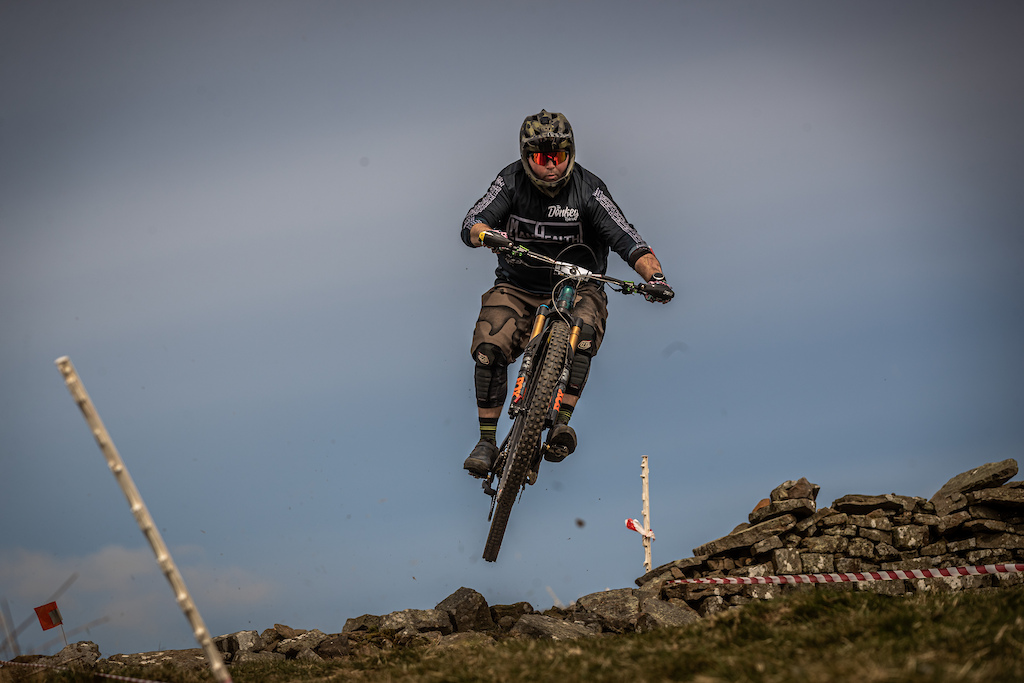 Tom Whipham came 3rd placed both Saturday and Sunday. Some boy!
The overall fastest time of the day was something of an eye-opener considering some of the faster lads who came to race. But after a near 2-year break from racing, Helen Gaskell absolutely blew the field away (excuse the pun). The format of a TT race is practice in the morning, then 2 timed runs and the fastest time is the racer's official time. Helen’s (Open F) time was 2:37.67 and nearly 6 seconds faster than the fastest man on the day Gary Ewing (40-49) in 2:43.55 and the 3rd fastest time of the day went to Charlie Austic (17-29) in 2:44.27. It was great to see Carl alongside PowerbikesUK embracing the e-MTB storm. Hopefully in the future Northern Downhill will continue to entice more e-MTBs out there to give racing a go. 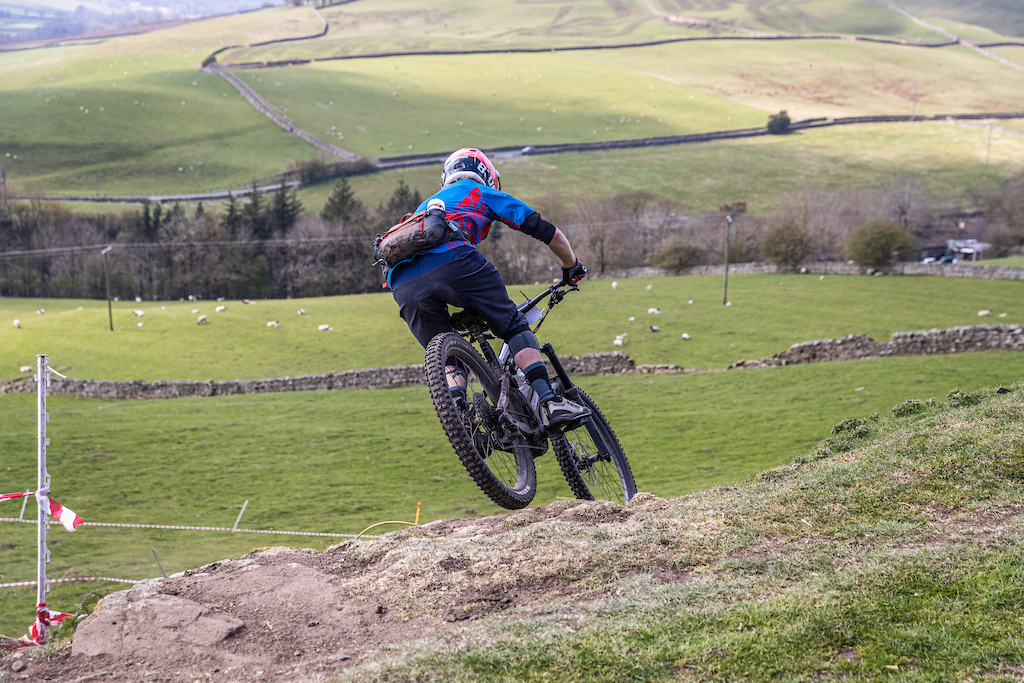 Gary Ewing fastest male on the hill
Sunday saw the first full event for Northern Downhill in 2021. Carl and his team alongside Barry Kemp of Cold Brew events did manage a couple of events later in 2020, and it seems like an eternity since the North East has seen any racing in these strange times. A mass of 240 riders turned up on the day to race, over twice as many racers that have ever been seen at Eastgate. Some riders even raced both days, as there was also an e-MTB category on the Sunday, as well as some riders enjoying both disciplines (Sarah Vayro!) The thirst for racing was very clear this weekend. Riders with new bikes and new kits were desperate to get them out. 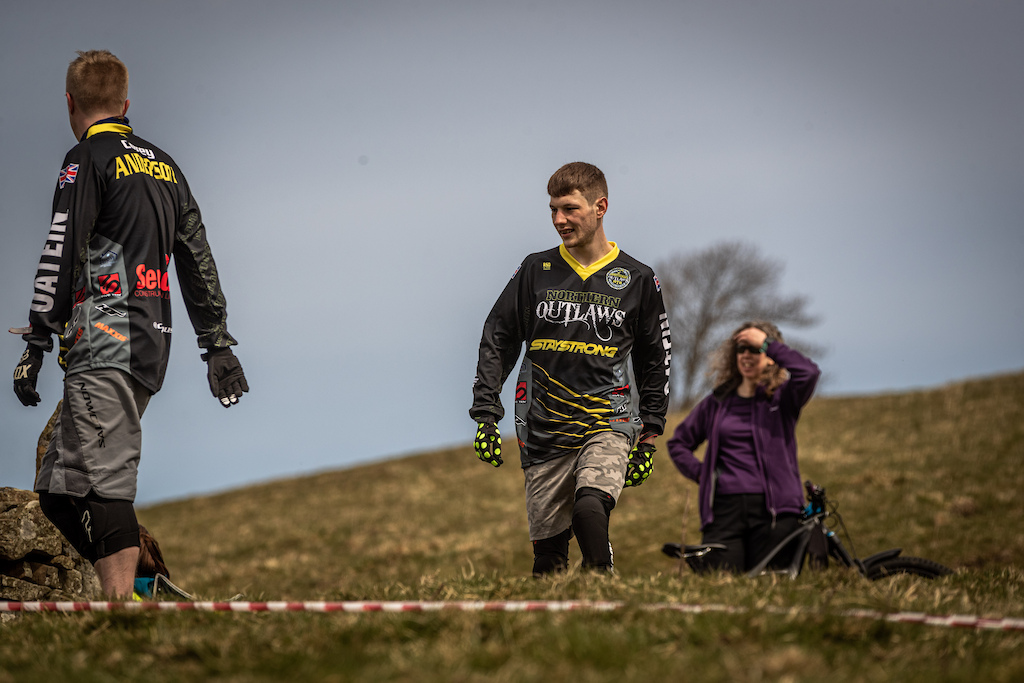 Teams were out in force
One thing for sure was the young guns were out in force, you can't help but think the future of this sport is strong. It would be great to talk about them all, but below you'll see some shots of a few select young lads coming up through the ranks. Some of the young women to mention are Hollie Vayro, Macie McCarthy, Florry Wharton, Katie Melville, Kacey Eyeington and Megan Plews. 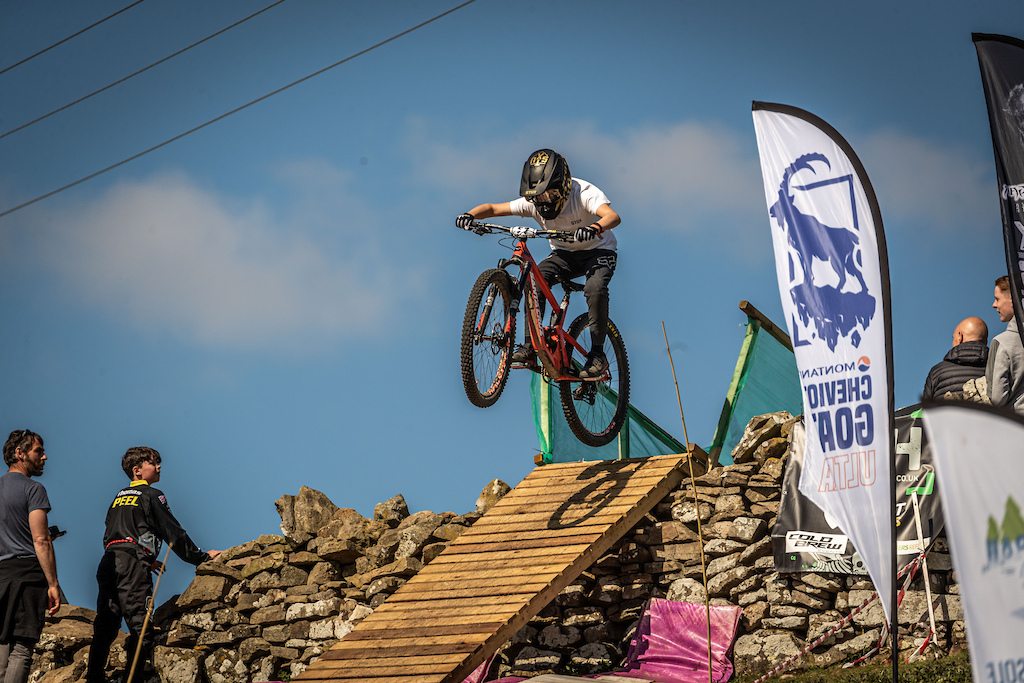 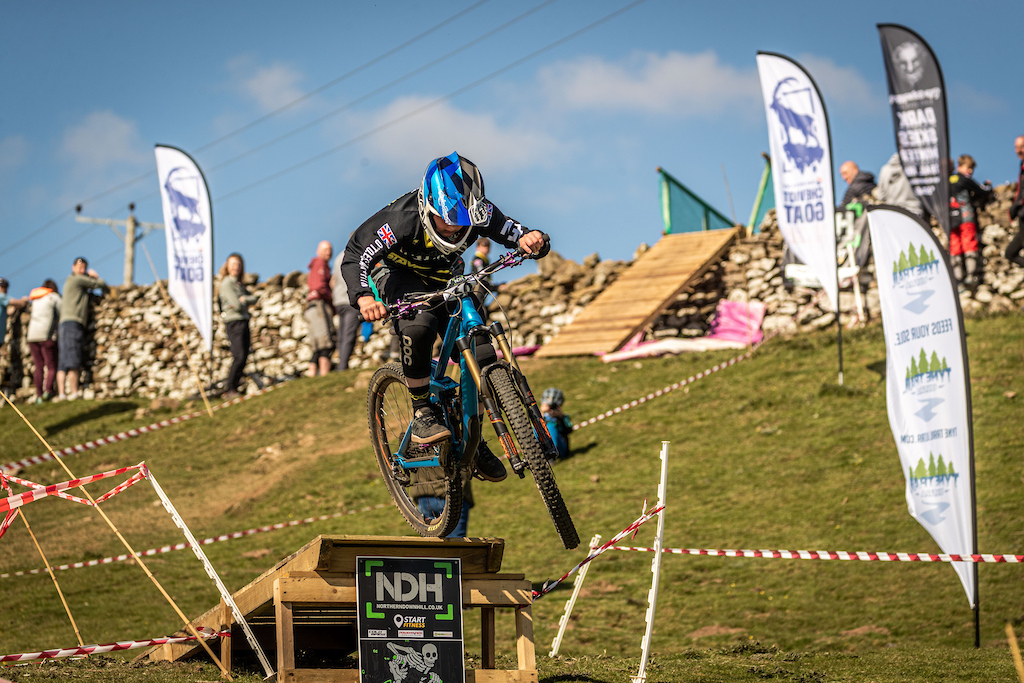 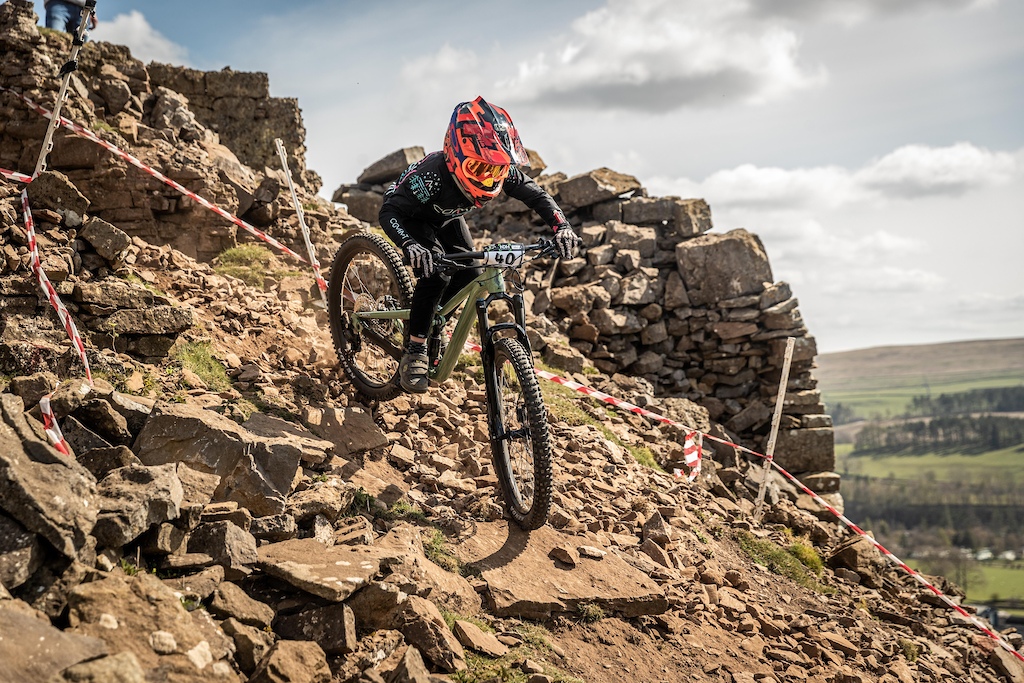 Where most riders pulled hard on the brake Richie Rae went hard on the pedals!
This course obviously did not have any e-MTB specific uphill sections, but riders were treated to rocks, wall crossings, huge wooden senders and the infamous chute down into the final section. Most riders weren’t great fans of the push to the top of the hill, but everyone I spoke to were loving the course, which was somewhat reminiscent of downhill racing back in the 90s. 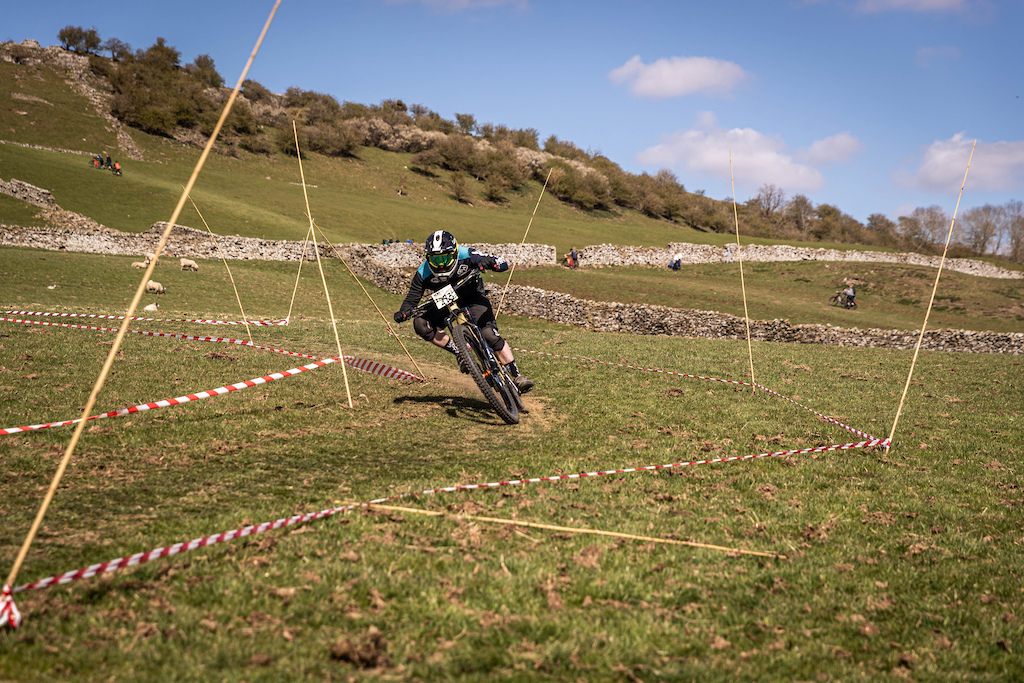 Fast and flat corners Brad Illingworth tucking in
The overall fastest riders of the day were the Philogene brothers and the only 2 riders to break under the 2-minute mark. Chris (19-29) was the overall fastest at 1:57.07 and Jonathan (19-29) only 0.29s slower. Man, that was some tight racing, was it down to the bikes used? Chris using a full-on DH rig versus Jonathan’s enduro rig? The 3rd fastest of the day went to Ruairidh McCritchie (19-29) in a superb 2:00.68. 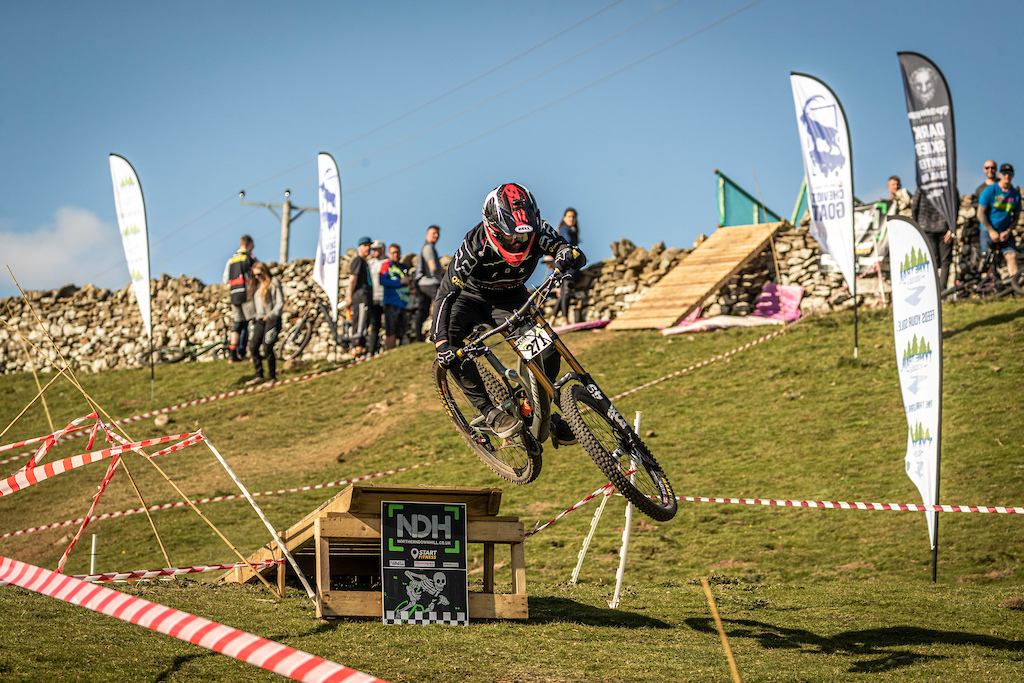 Chris Philogene fastest rider of the day
The fastest woman on the hill was the awesome Toni Fryer (21-30) in 2:22.77. In her last 10 races, she’s been either 1st or 2nd so Toni is no stranger to the podium. The second fastest woman was Hollie Faith Vayro (11-20) in 2:27.66 and hot on Toni’s toes for sure. Hollie too, is no stranger to the podium, and 3rd fastest woman on the day went to Sophie Cade (21-30) in 2:30.81. Sophie is still relatively new to the racing scene, only having raced 7 times with 5 podium finishes, including three 1st places! 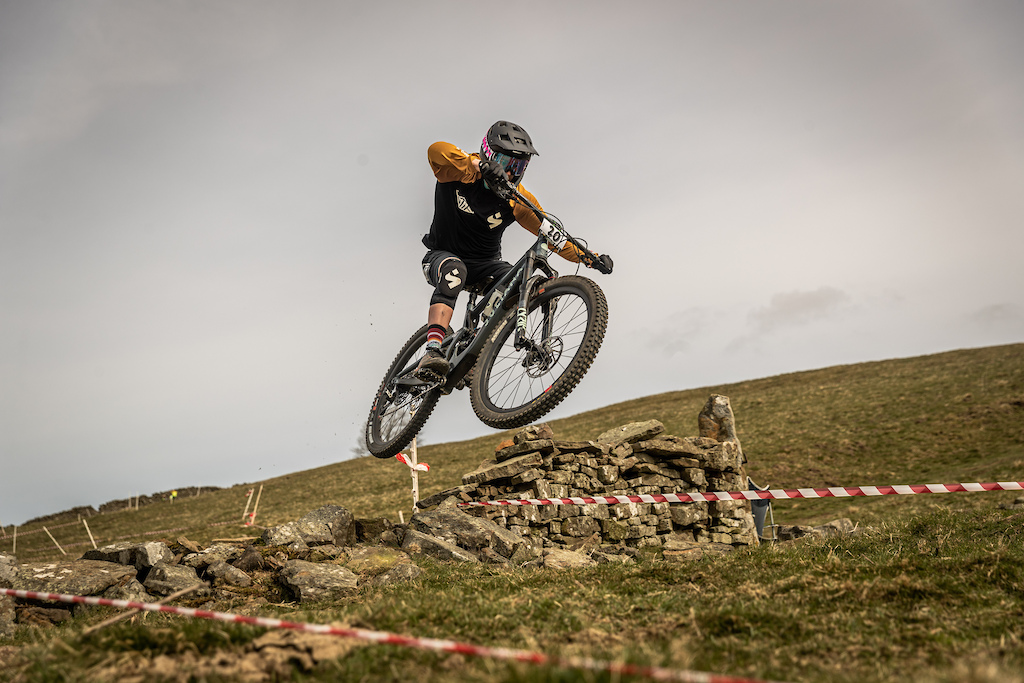 Toni Fryer back to winning ways

That’s a wrap for this weekend’s shenanigans where nearly 300 racers were entertained by the Northern Downhill. Helen Gaskell came, saw and conquered the e-MTB race and finally racing returned to the North East after some crazy times. For more information on entering further Northern Downhill races, then head over to their Website or Facebook. For a full rundown of the results including each category then head over to roots and rain. 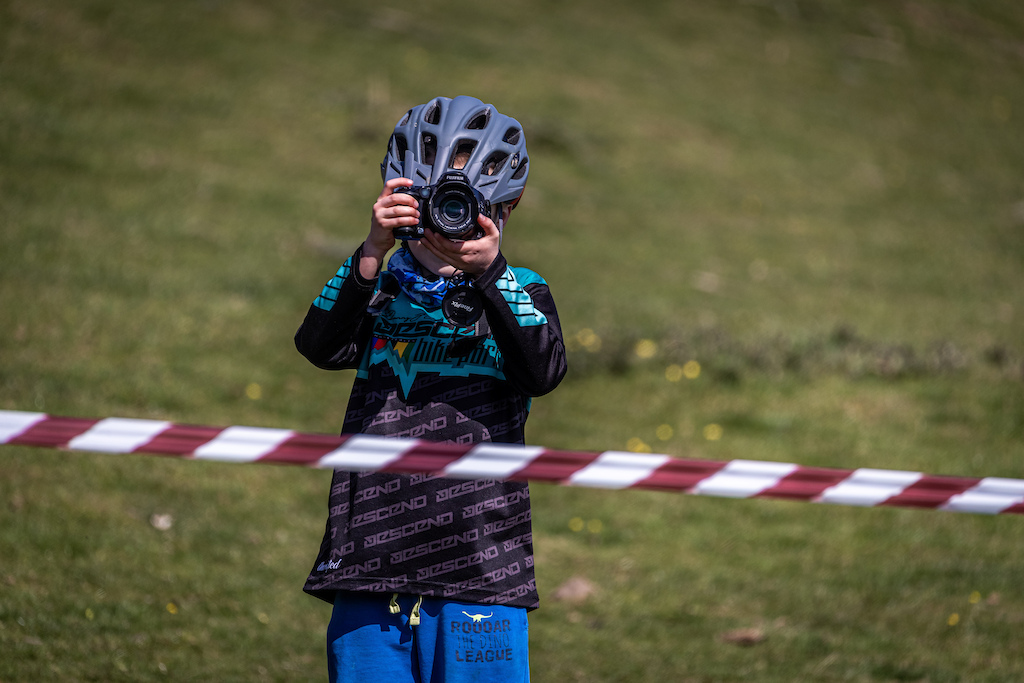 I got snapped whilst shooting - Lewis 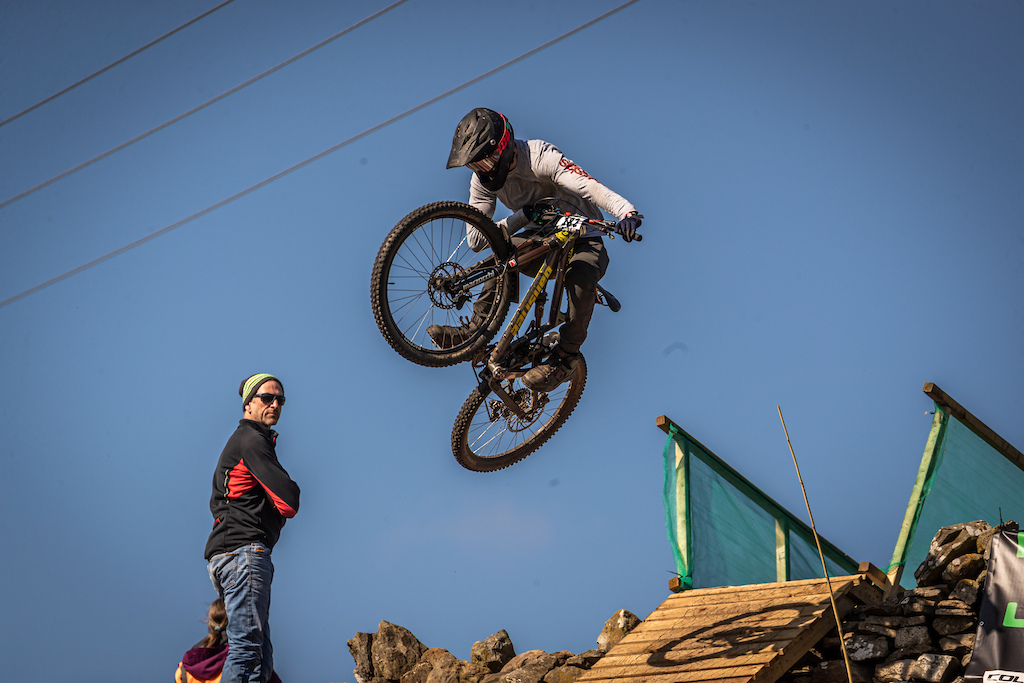 me, i'm twisted. i love self inflicted suffering. ... I appreciate i'm in a minority...

Bripitt25 (Apr 28, 2021 at 1:52)
Absolutely brilliant Sunday, loved the course. Them old skool flat out off camber turns where so fun. First time at Eastgate, definitely be back for the next one.

Willoyd (Apr 28, 2021 at 3:11)
Same here. First race and I loved it. Those off camber turns really were sketchy. Booked on the next one at Castlewood already

danposs86 (Apr 28, 2021 at 2:12)
Nice write up Jerry. Course preview was great, but your lockdown ponytail kept going infront of the gopro.

JWDTphotography (Apr 28, 2021 at 2:45)
It's pretty simple to be fair. This is firstly a race that is about grass roots and inviting to anyone wanting to have a go at racing. Yes it's a DH style race, but the e-MTB race on Saturday had specific uphill sections. It also means anyone can race, basically, if you can only afford one bike and it's an e-MTB then you can enter. "Ebikes have no place in MTB racing" - tell that to EWS who will be hosting e-MTB racing.

Imabigboy82 (Apr 28, 2021 at 3:35)
@JWDTphotography: Thanks for the context and totally understand the fact most people own a single bike so its not very inclusive to exclude those who can only afford one or the other. Ebikes are already in the EWS and I think its a joke but thats just me, completely defeats the object of a race for Endurance imo.

fatduke (Apr 29, 2021 at 0:02)
@Imabigboy82: enjoy living in the past then fella cos e-bikes aren't going anywhere soon and are more likely to be incorporated into existing events.