The Specialized Revolution Enduro Series Presented by Rockshox just wrapped up what should have been their second stop, as their first race in Eagle in late June was thwarted by a serious wildfire. This time in Northern Colorado, near the iconic mountain town of Steamboat Springs.

“It’s been a rough start to 2021”, said Mike Day, who took over Revolution in January of this year. “First the cancelation in Eagle, then two more wildfires threatened to put a stop to us in Steamboat as well.”

As the crew rolled into Northern Colorado the week before the race, there was thick smoke in the air from multiple fires. On top of that, there was the occasional flash flood and historic and destructive rainfall all around Colorado. Then, a third fire started as a result of a lightning strike in the area just days before the event was to take place. “ We honestly had no idea if the race would move forward, but we stayed on-task and got the venue ready for the sold-out field that was hoping to get between the tape,“ said Day.

Despite all the fury that mother nature had dished out the weeks and days before the race, on Saturday morning the clouds parted over Hahn’s Peak, north of Steamboat Springs, and the dirt was something of fairy tale proportions. One rider said, “even the roots are sticky.” The morning kicked off on schedule, and stage one’s start line setting was in a thick aspen grove, with nothing but perfect tacky dirt, and bumping tunes to get the riders fired up for their first stage.

The weather held, and riders went on to tackle five big backcountry stages, including an incredible effort from the youngest racer to complete the course, 11-year-old local Robbie Wodnick, who stood on the podium solo. There aren’t too many youngsters that could even complete a course like this, never mind tackle it at race pace with the entire field. The future of enduro is bright! 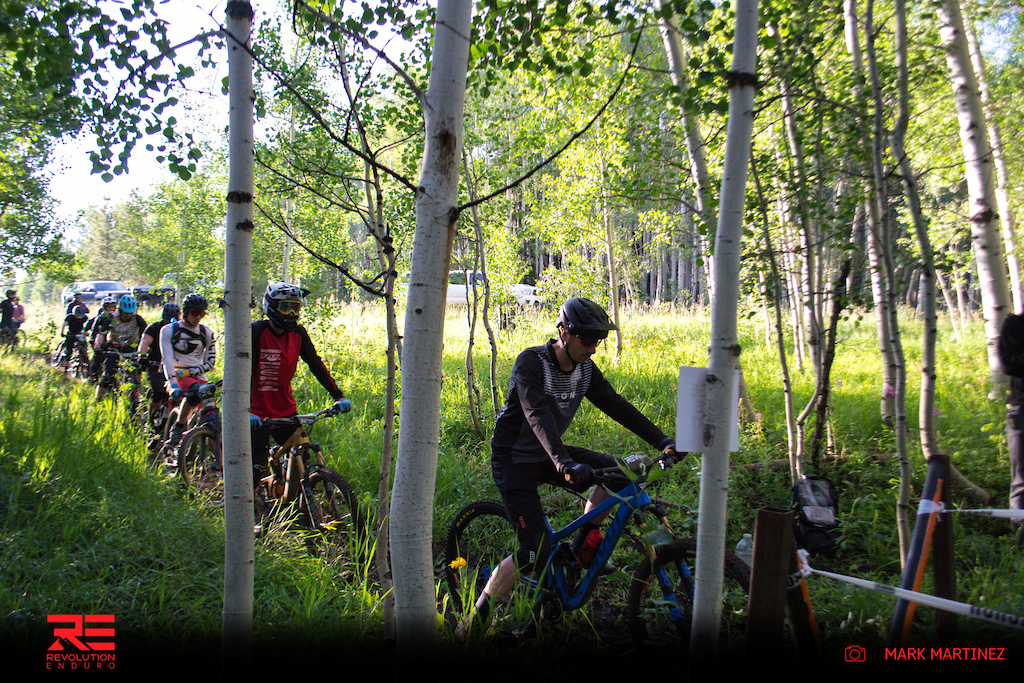 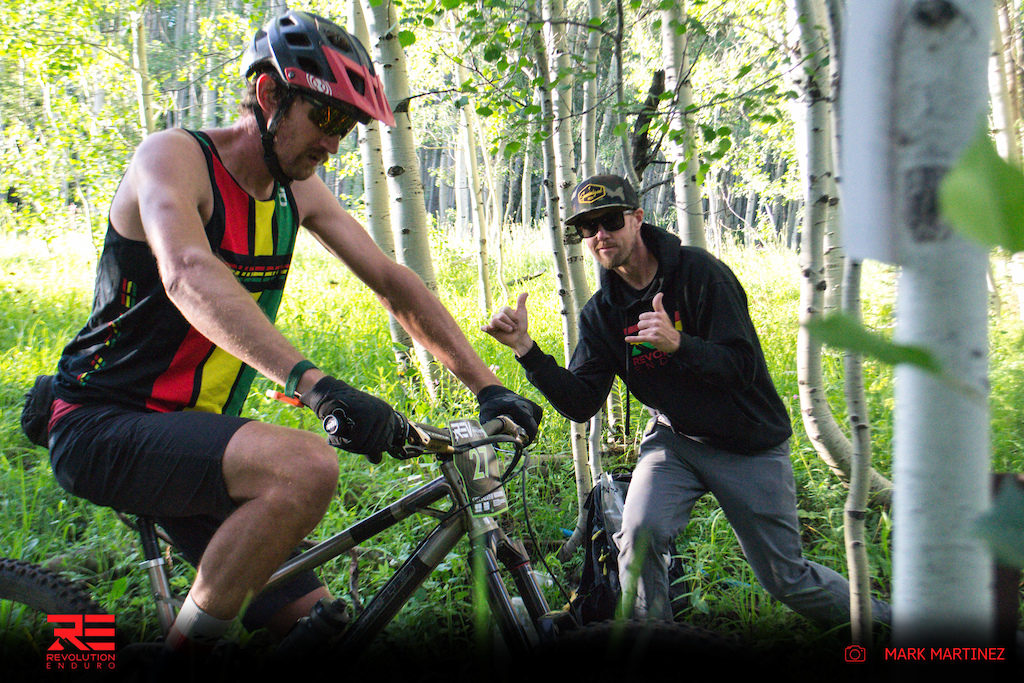 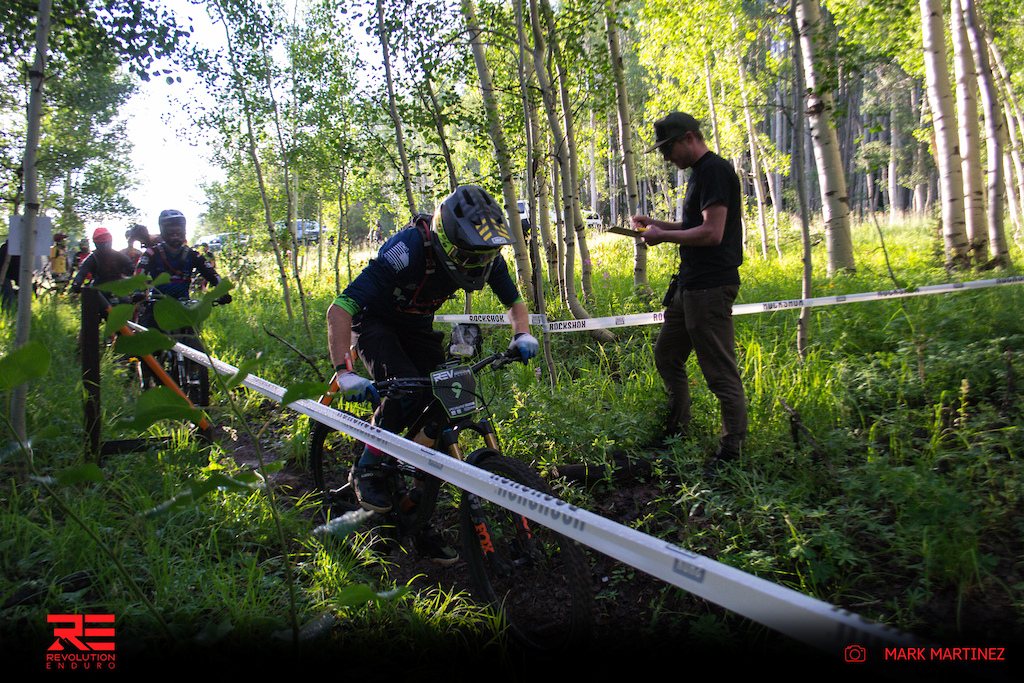 About halfway through day one’s 4000+ feet of climbing, riders were greeted to an aid station filled with water and snacks presented by Skratchlabs, and EVO, who brought their mechanics for remote backcountry support for riders in need of small repairs and maintenance. They had their hands full all day as riders lined up for some adjustments after two rowdy stages. After fueling up, it was onto the final three stages of the day. 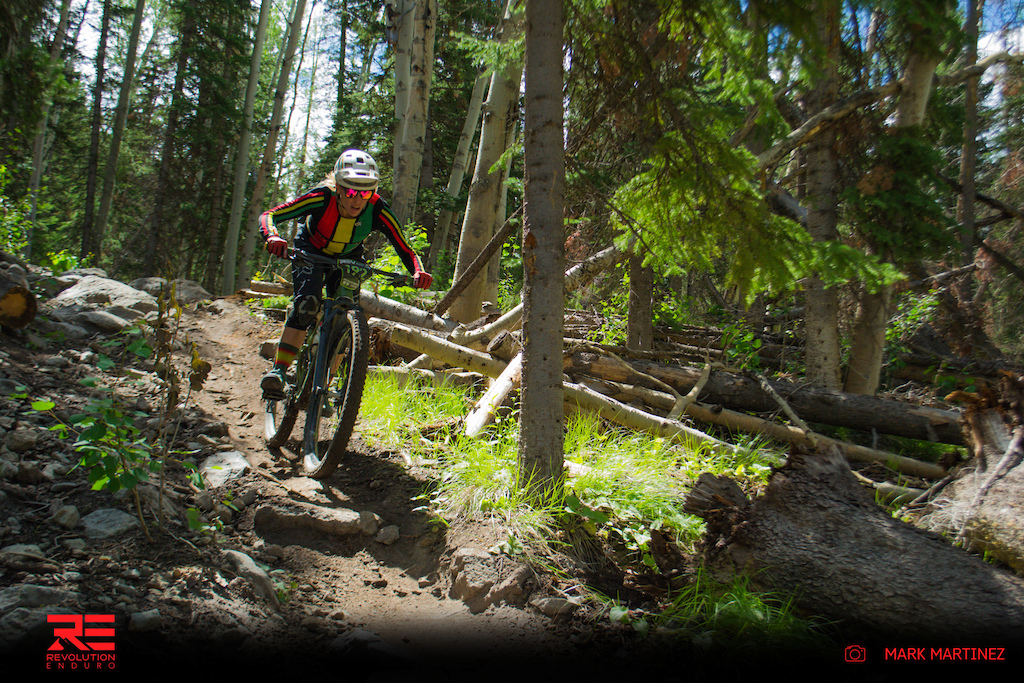 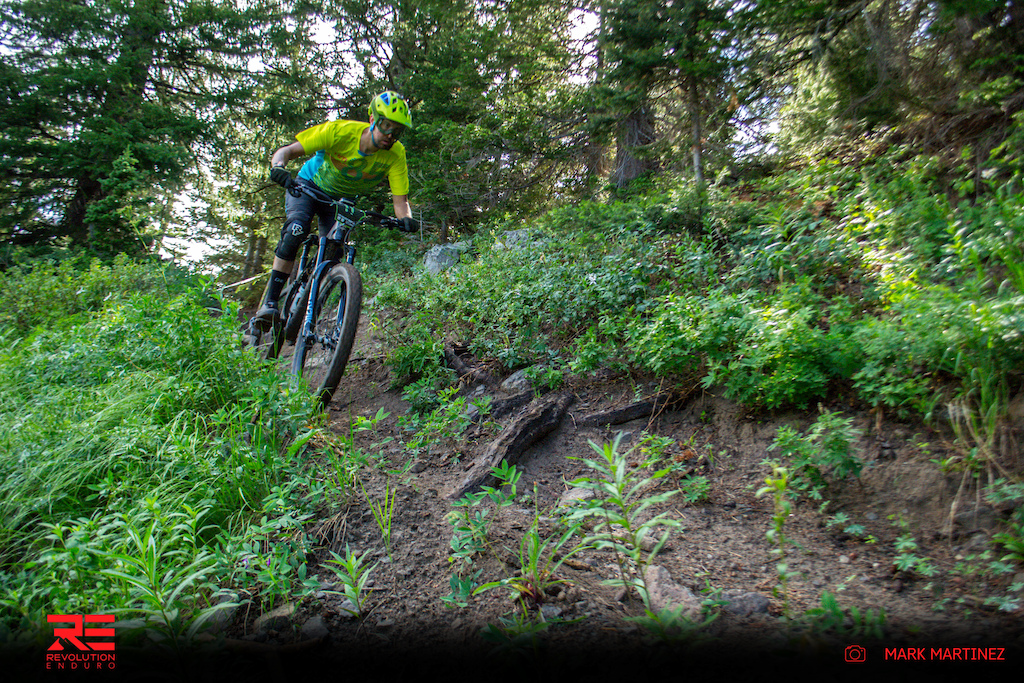 In one of the biggest fields, Men’s 40-49, with over 40 riders in the class, the veteran rider Mike West took home 4 of the day's 5 stages, losing only one stage to Tate Graves, who kept the pressure on Mike all day. Rounding out 3rd on the day was Grant Shoemaker, who’s no stranger to Revolution’s podium steps, and kept the pace throughout the day. 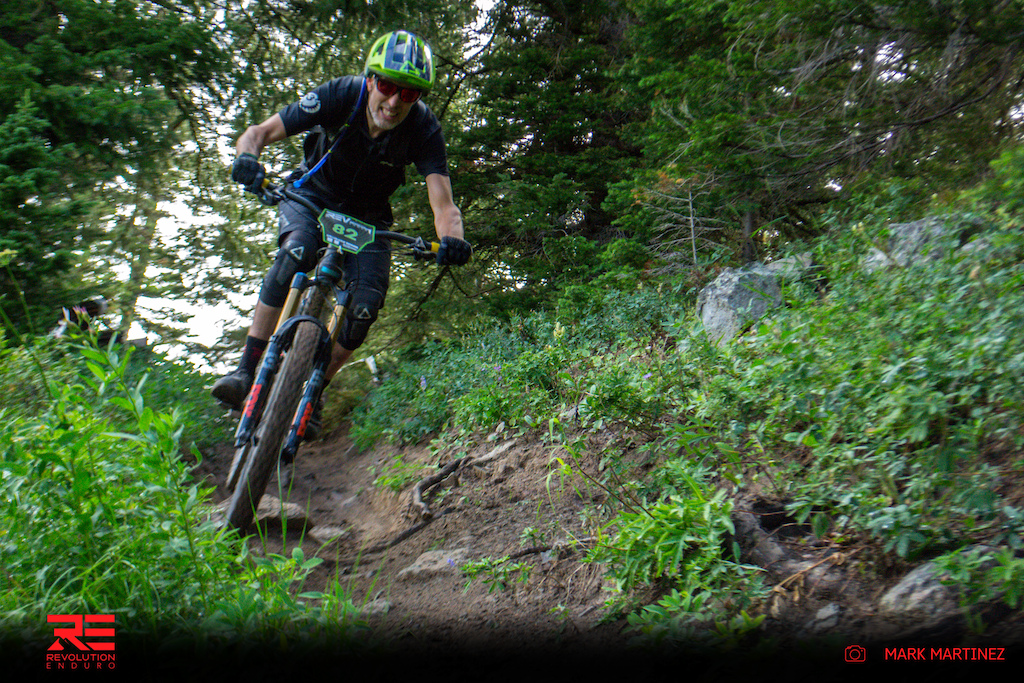 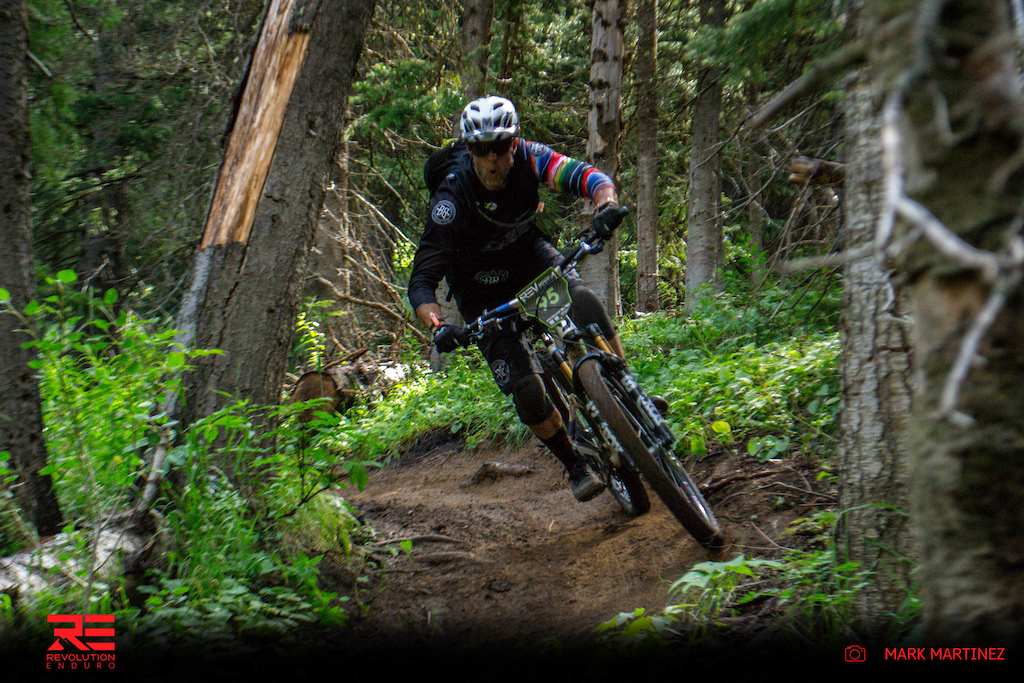 For the open women’s field, Kiya Kelly, out of Golden, Colorado, stamped a demanding lead over her fellow racers, putting seconds into the other ladies and taking first on every stage. She couldn’t lose momentum though, because Moriah Lee and Amy Beresford were charging as well, and with $750 dollars at stake for first place, no one was giving in yet. In the Junior Women 13-18 field, 13-year-old Mary Mclarnon was putting down pro times as well and was faster than the pro ladies on several stages. 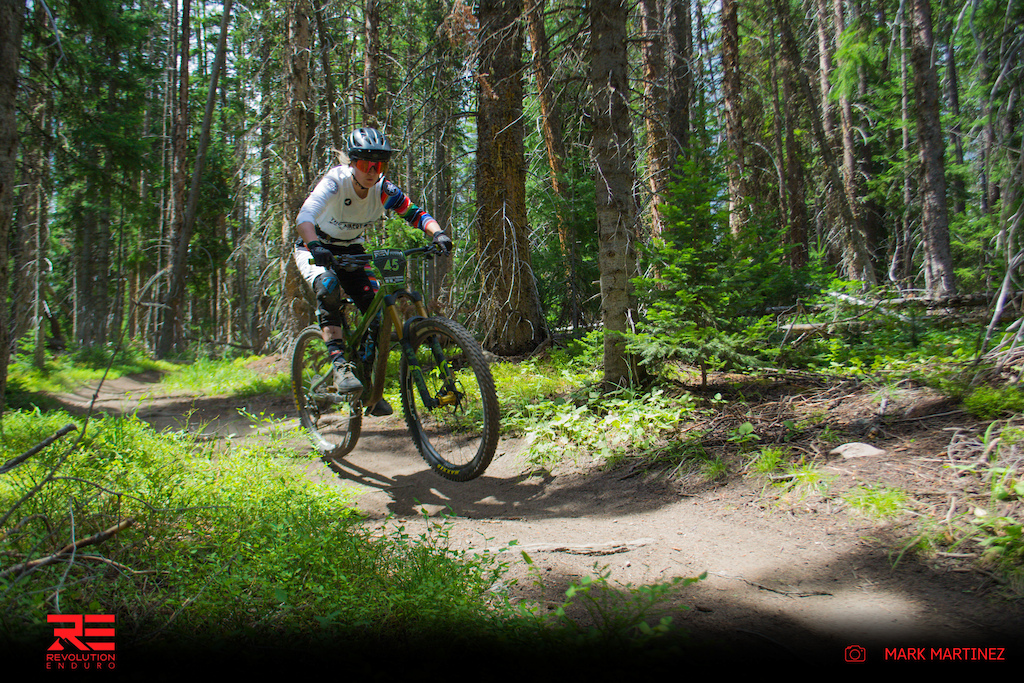 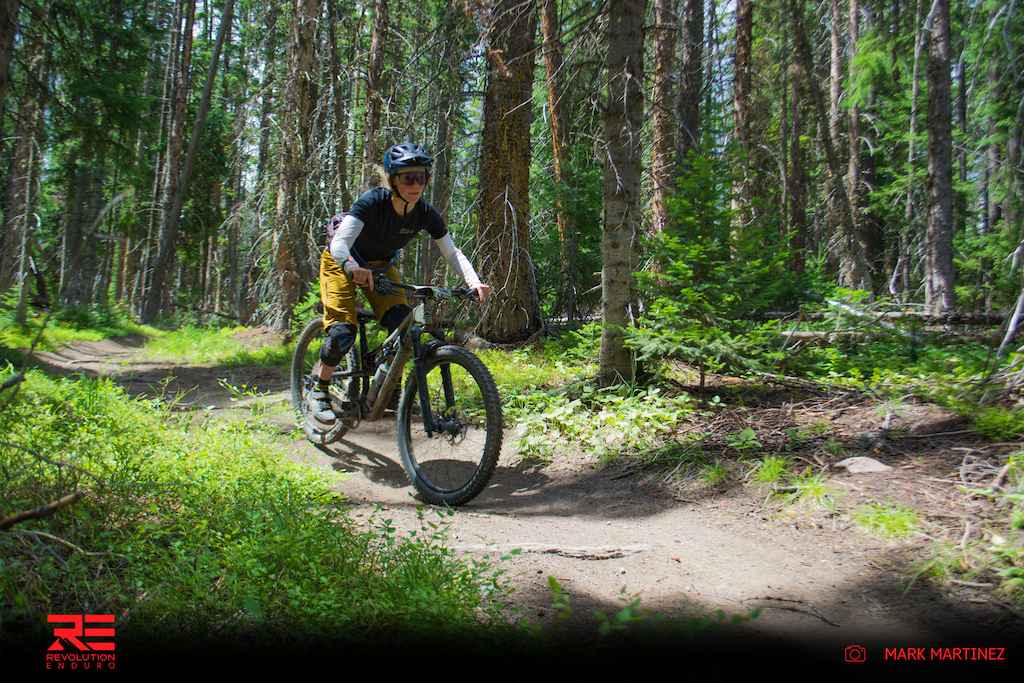 The Open Men’s pack was a slightly different story on day one. Young guns Colton Peterson and Jake Ingram traded blows all day with Alexander Vidal, each taking stage wins. Macky Franklin was also in the mix, and his experience and consistency kept him in the running even without a stage win. 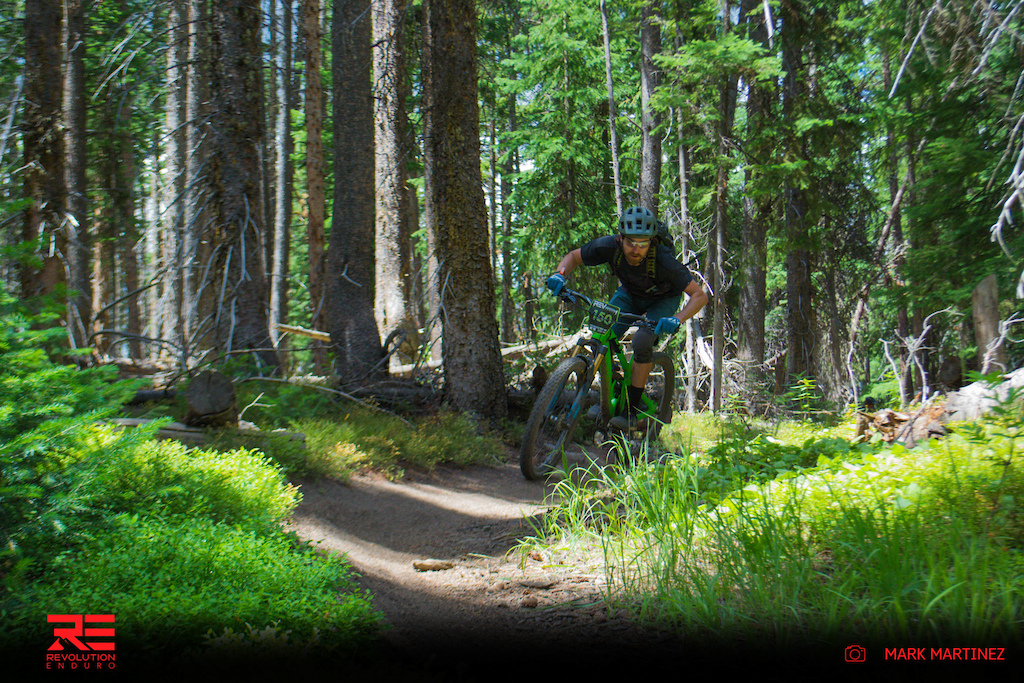 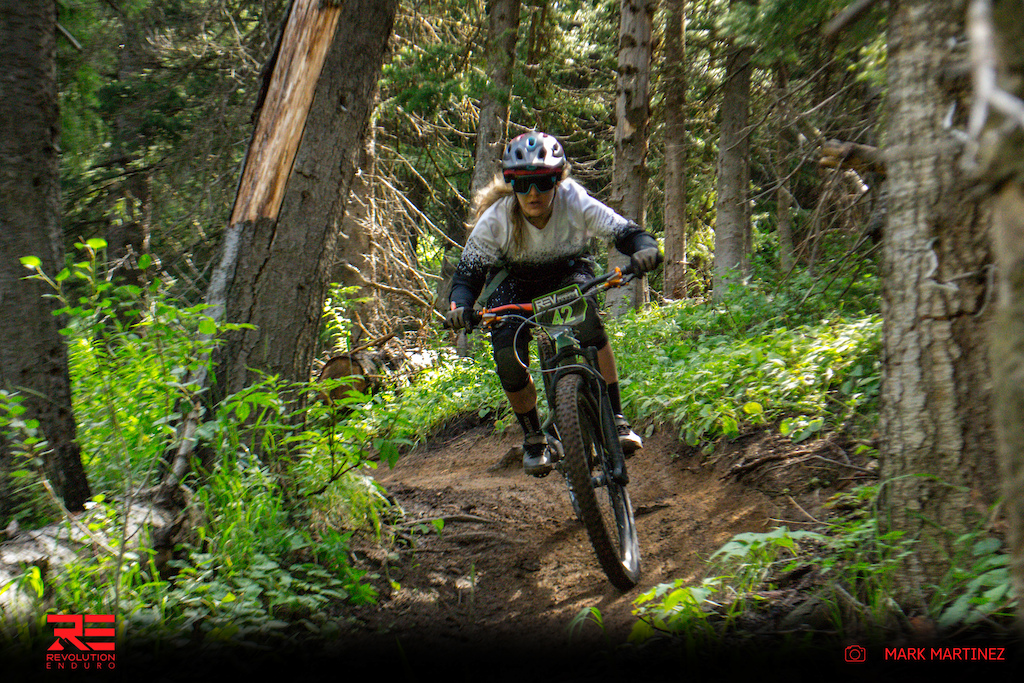 When the day was wrapped up, riders hooted and hollered into the evening in the remote North Routt forest and told stories of epic dirt, BBQ, and beers, and some even got their bikes ready for the smashing they were about to be handed on Sunday.

Sunday’s stages were slightly edited to reduce the amount of climbing the riders would face, in the case that nearby wildfire conditions would worsen air quality, so the stages went top to bottom on a local favorite.

Grouse is an altogether different animal than day one and would offer a polarizing contrast to Saturday's dream soil, being one of, if not the gnarliest descents in the area, with granite rock slabs, pro-lines, chunky steep rock gardens, and high consequences strewn throughout the jagged alpine. 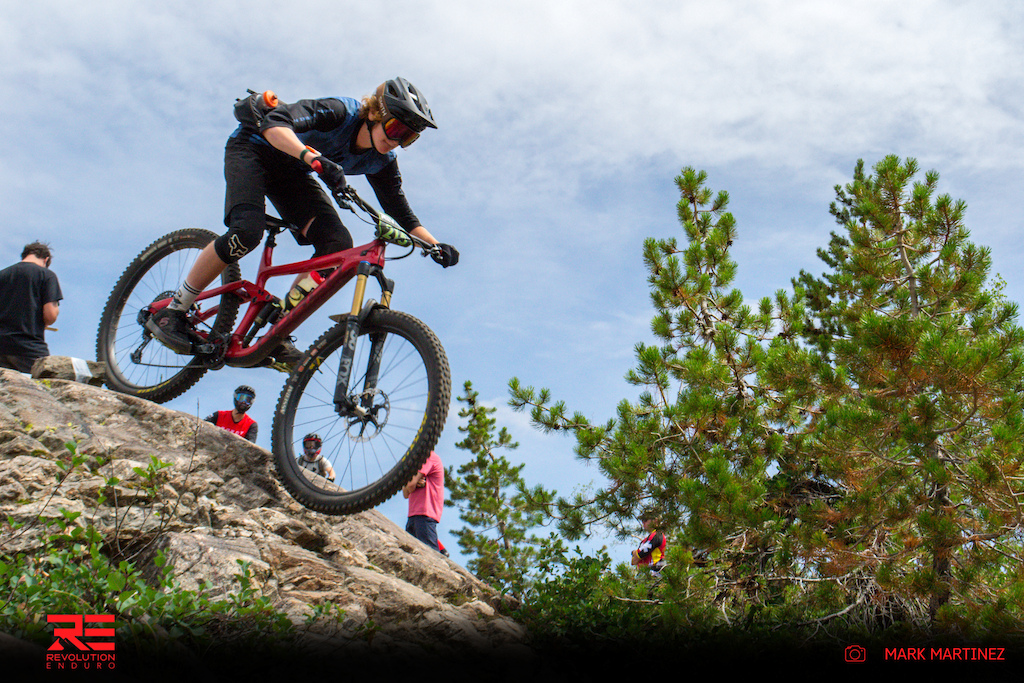 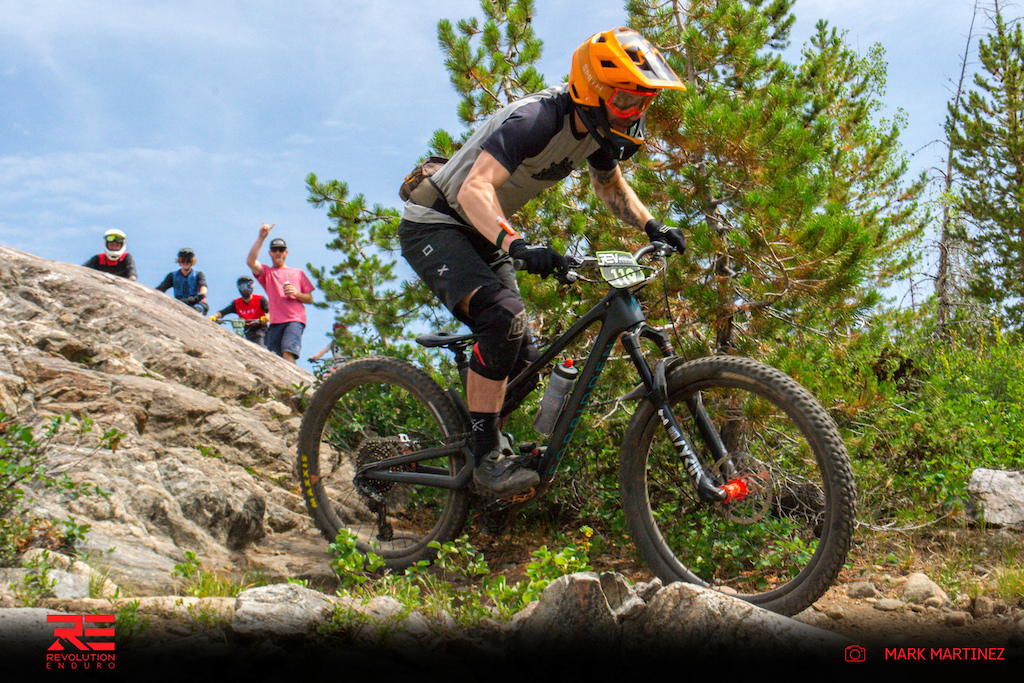 Everyone rode strong, especially 5th place finisher on the weekend Riley Bartz, who came off the bike on Stage 6 and badly injured his hand, but held onto the bars somehow through the final stage and held onto his podium spot. 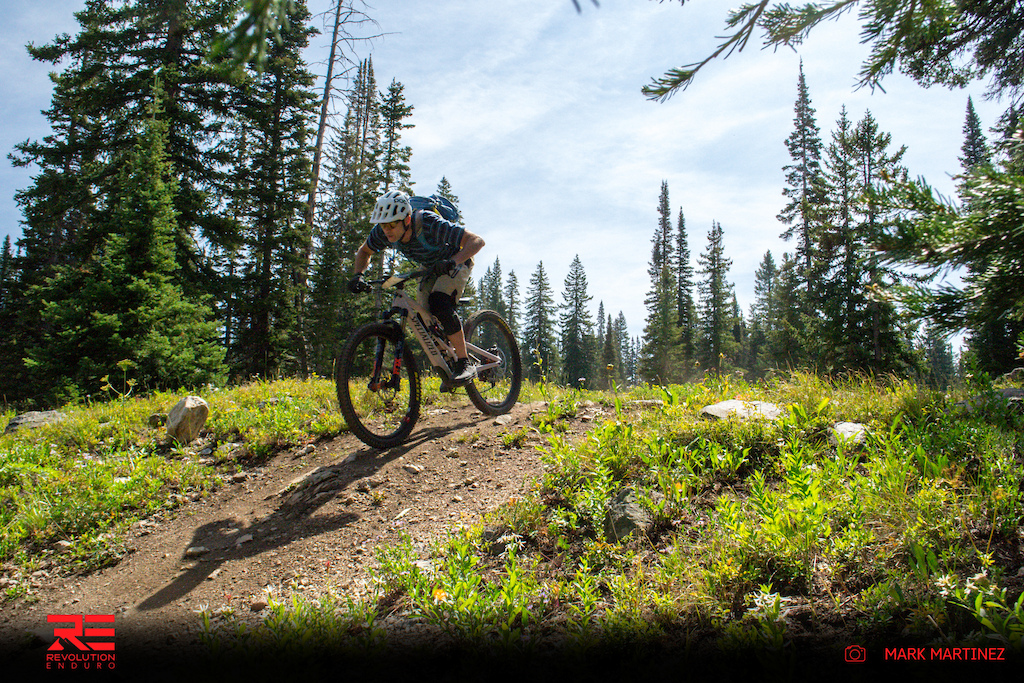 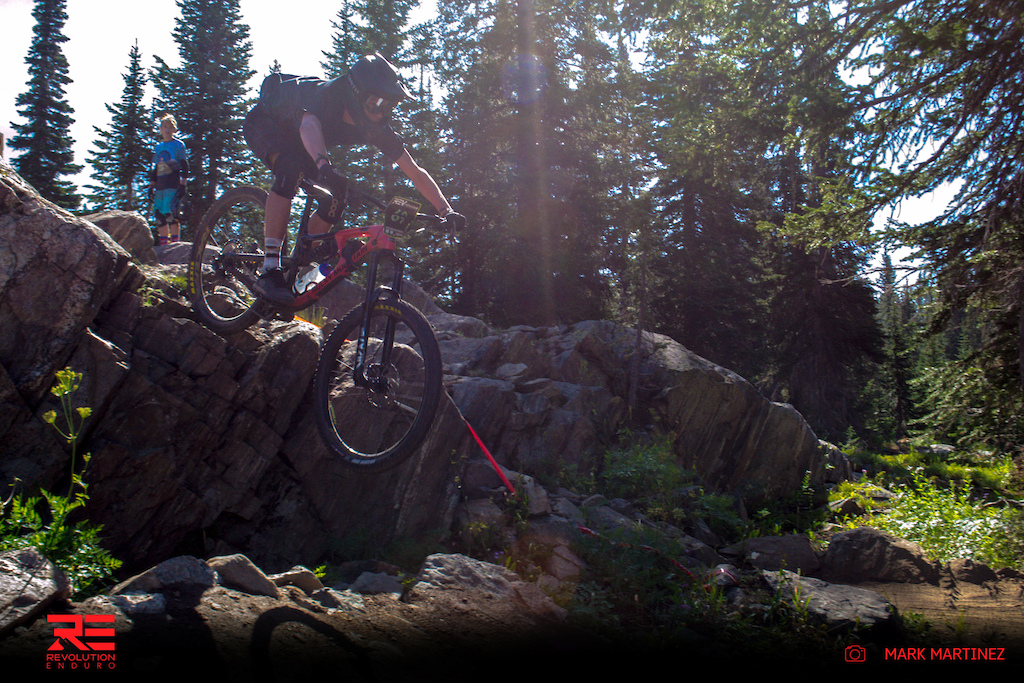 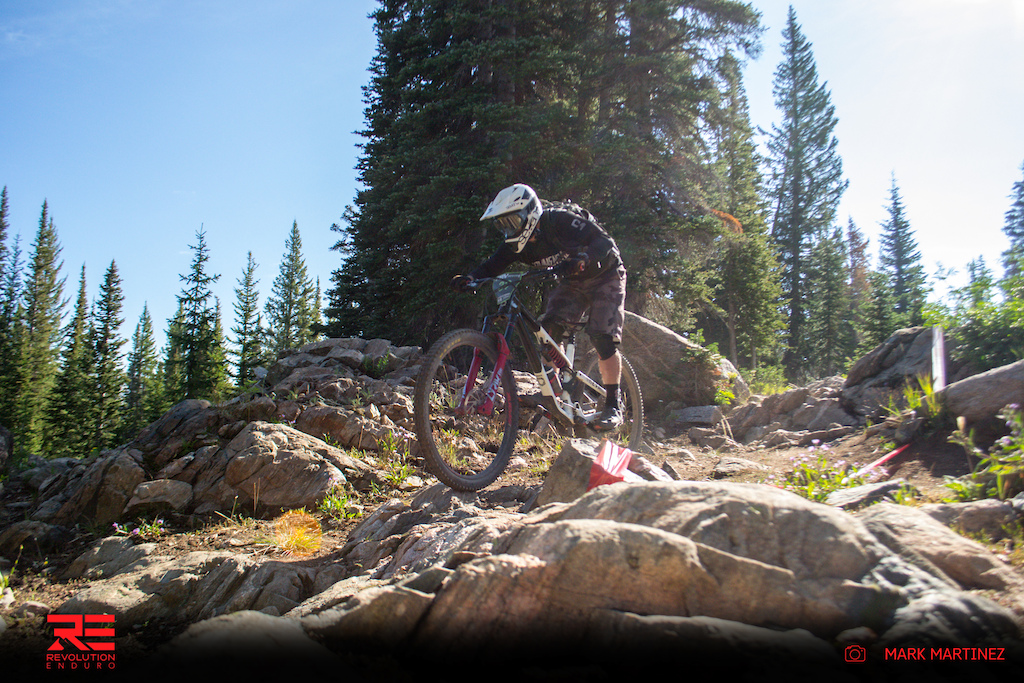 The weather couldn't have been nicer, and aside from some bumps and bruises, everyone made it back to HQ safe and sound, where they were treated to cold beverages from nearby Brewery Storm Peak and an endless supply of Moe’s Original BBQ in Memorial Park in downtown Steamboat Springs.

The next stop takes place in the iconic mountain town of Snowmass, Colorado, where riders will duke it out in the bike park, and the series overall winners will be decided.