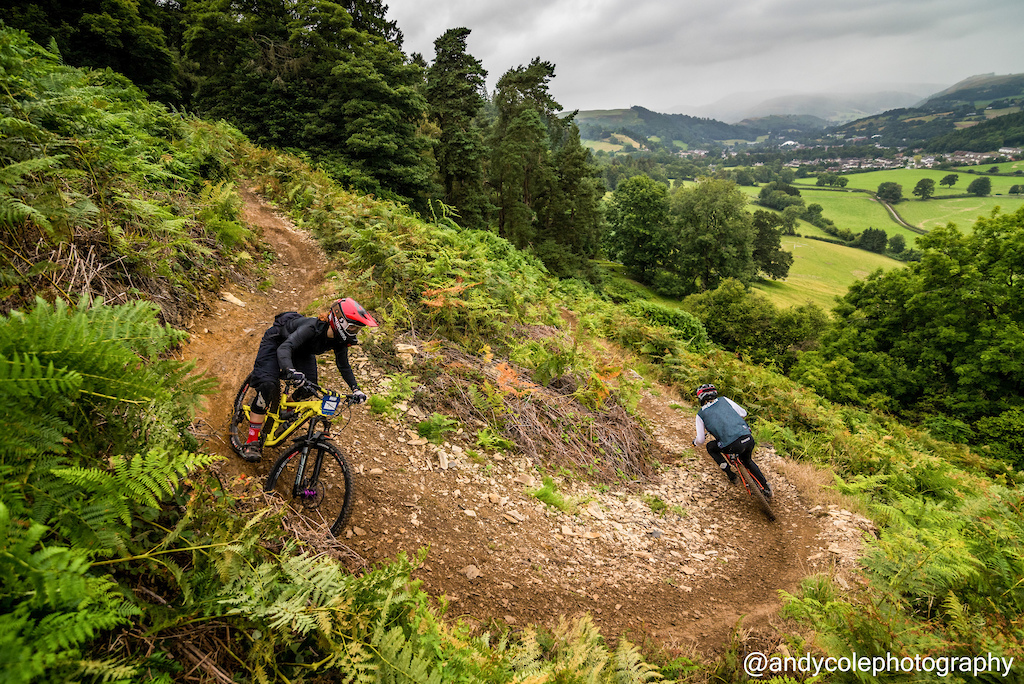 Steep sweeping berms
For the second time ever the PMBA Enduro Series returned to Wales and the amazing Llangollen hillside of One Giant Leap. The only race series that takes racers to the three nations of Britain. England, Scotland and Wales. This was not just another series round though, this was also part of the British National Enduro Series (round 4) and another Enduro World Series qualifier. One Giant Leap is a well established downhill venue, it's steep and very fast with some very rough downhill sections. As you approach the venue along the stunning rolling Welsh hills, I sure found it overwhelming to see the steepness of the hill and the visible trails meandering down the side of the hill. 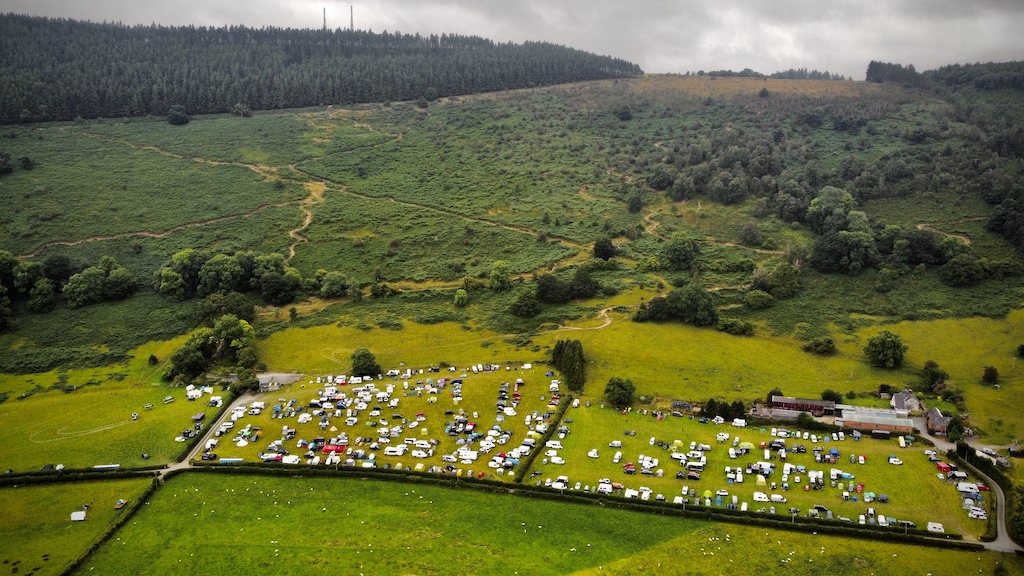 Normally a downhill venue, PMBA organiser Kev managed to put in 5 differing stages
This weekend's race was a 2 day event, with many riders arriving on the Friday to set up camp or base, and do a track walk. The Saturday was about practice, finding the lines and realising what you had gotten yourself into. Sunday was the race, from an early start riders were heading up the hill. And again there was an opportunity for the women to head off as the first group, a great idea considering how male orientated the sport still is. The Saturday was certainly challenging for the organiser as riders were a bit too excitable for the early running, very rowdy on the hill with a period of time where practice had to paused for about an hour as the medics were attending to a number of injuries at one time. With all medics fully being utilised you simply could not continue to safely continue practice. However, Kev reacted immediately and arranged a 4th medic team for the Sunday to cover for the race. On the actual race, things had settled down somewhat and there were far less incidents, maybe that was down to the weather, which through the day was cruel, or maybe the rider realised the consequences of such high speed crashes. Those with early starts managed to get round a "relatively dry" course, however, the mid pack had to contend with some heavy rain and increasingly slippery trails, but by the end it had again dried out. Stages were greasy in the wet, especially through the woods on stage 4, probably the most "downhill" stage. 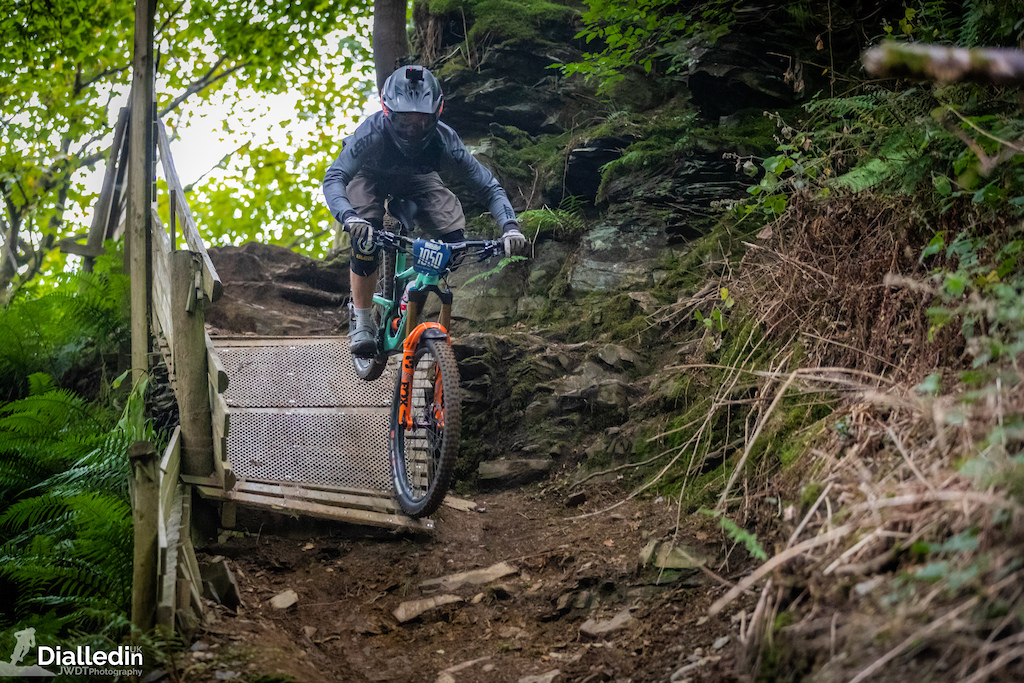 The race consisted of 5 stages, with new sections put in by the PMBA Enduro Series builders and helpers.

Stage 1 was "Gentle Giant", this was the mainline with a little tweaking and the easiest stage of the day, but don't let that fool you, it was still steep and super fast! 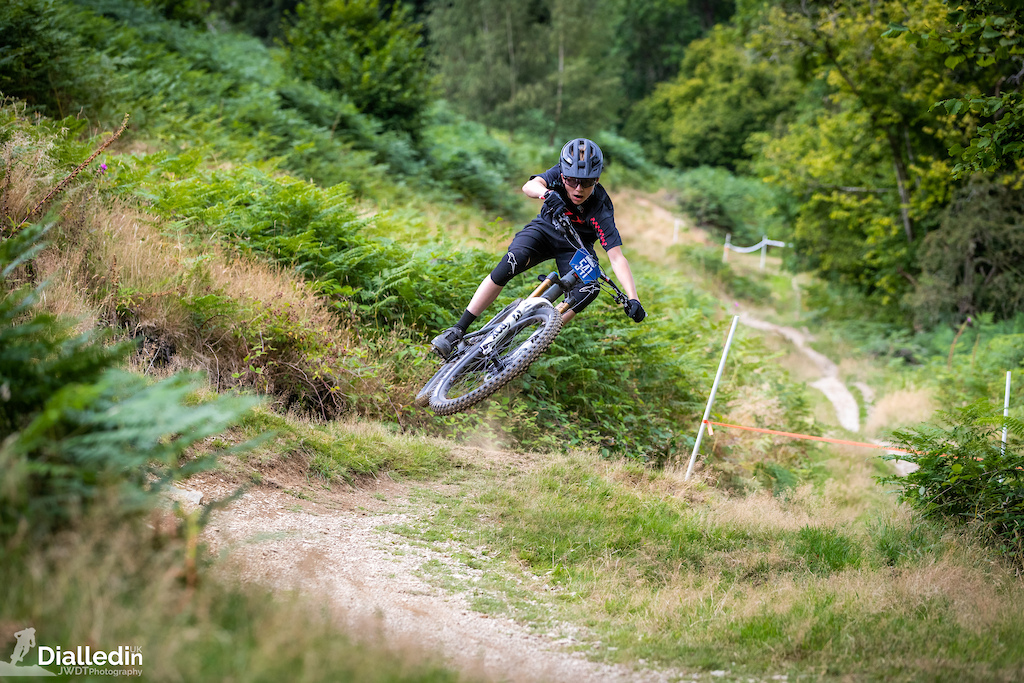 Charlie Bennet going full beans on stage 1
Stage 2 was "Einherjar" and had one of the best enduro sections, freshly cut into the hill to join different sections up. This trail was possibly more technical than stage one, especially in the final wooded section. 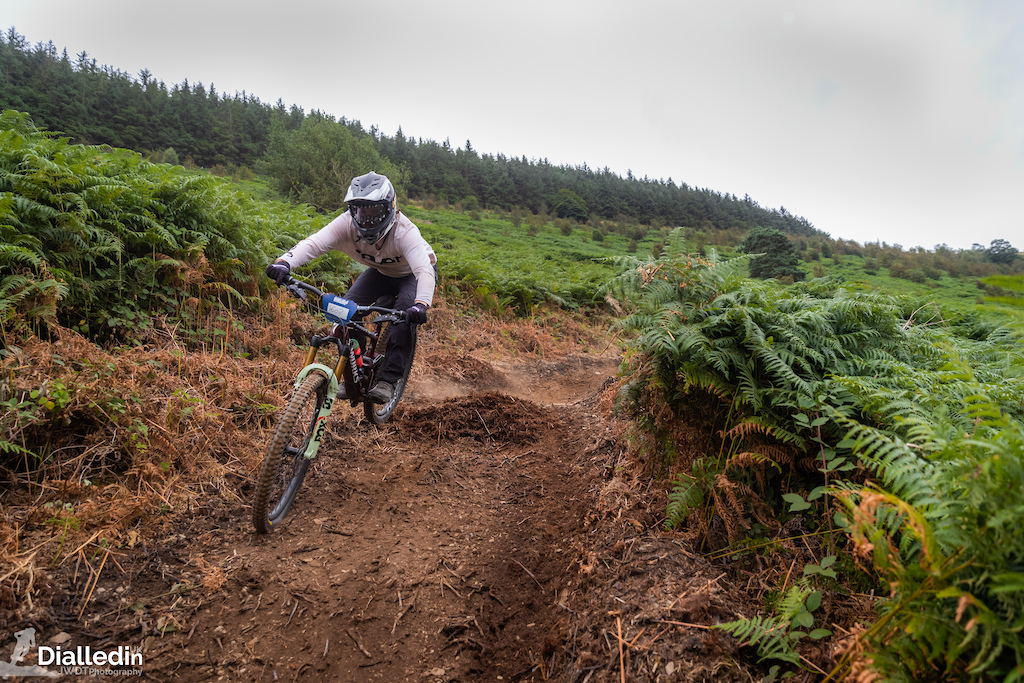 Fresh cut joining section
Stage 3 was "Ride the Lightening" This is the stage they were hoping to get to use in 2019 but ran out of time to finish the building. Originally started by Brian Mundy, and completed by Martin, the owner, during the first lockdown it was ready to race. As the usual start is shared with other stages you dropped straight into the guts of this awesome stage. Stage 3 starting to get a little more technical with big rooty sections and steep sharp turns. 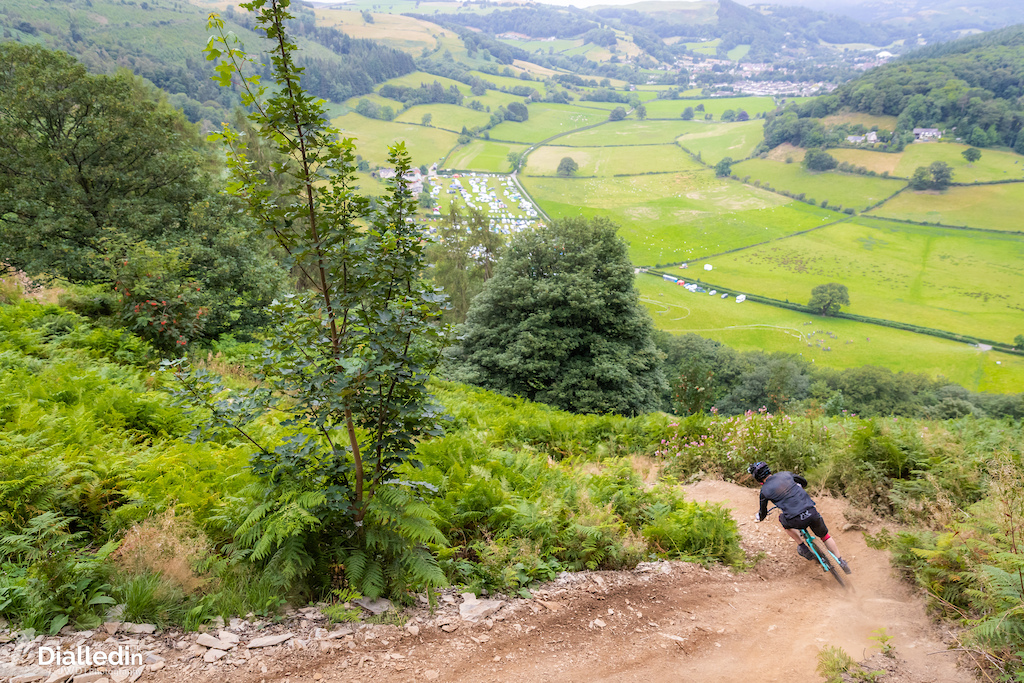 Photos often do not do justice to the steepness
Stage 4 or "Gully Run" is where things started to hot up for sure. While based around the upper part of “Portugal” the roughest DH track on the hillside the gully end was full enduro and was also “the stage with the climb” contrasting the first half of the stage with the rest it was really a stage of 2 halves. 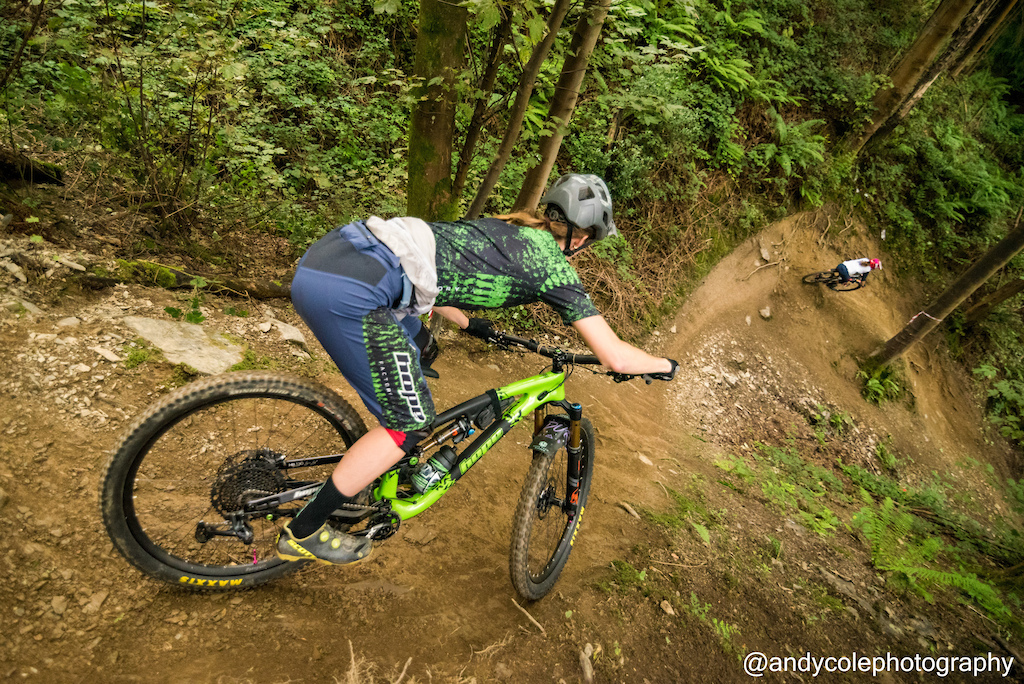 Most riders would agree this was the toughest DH style section of the weekend
Stage 5 was Esquilo. Esquilo used parts of Son of Squirrel and the Portugal end, and this was stage 1 in 2019 and its steepness surprised many, improved for 2021 and a fitting finish to the event. 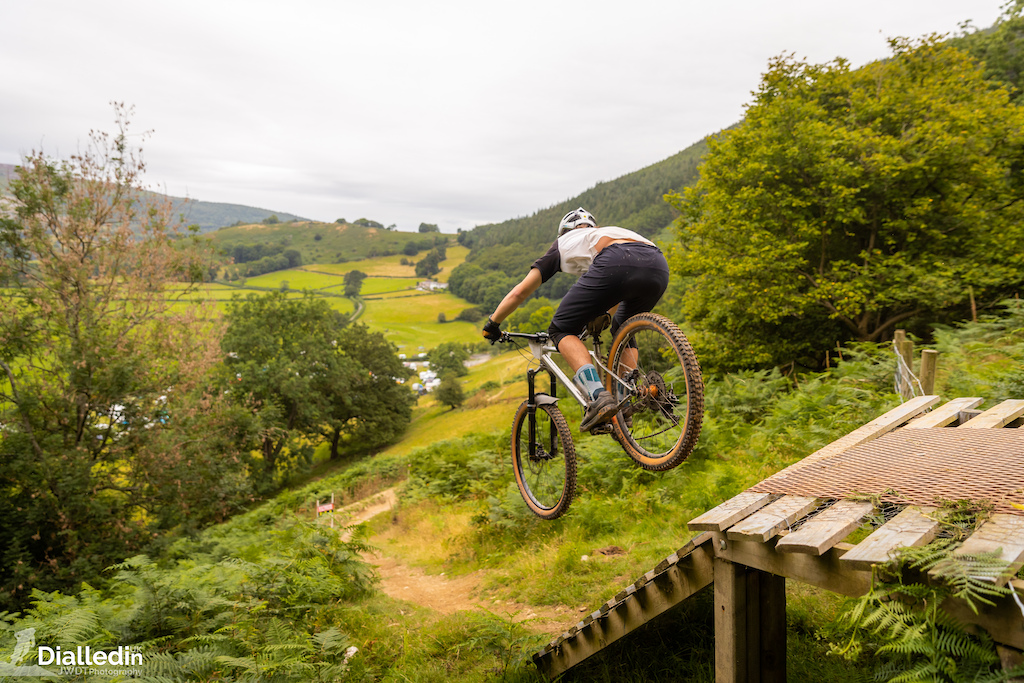 This was the biggest ever event at Llangollen with 532 racers taking part and 473 finishers. The fastest rider of the day across the 5 stages went to Riley Scott (21-29) in an incredible 12:15.00 straight. Second fastest and literally breathing down his neck was Jono Jones (21-29) in 12:27.73, also racing his first PMBA! Third fastest went to Christo Gallagher (21-29) in 12:32.86, helped with an early start in the dry. This was some tight racing for the top 3 spots for sure. 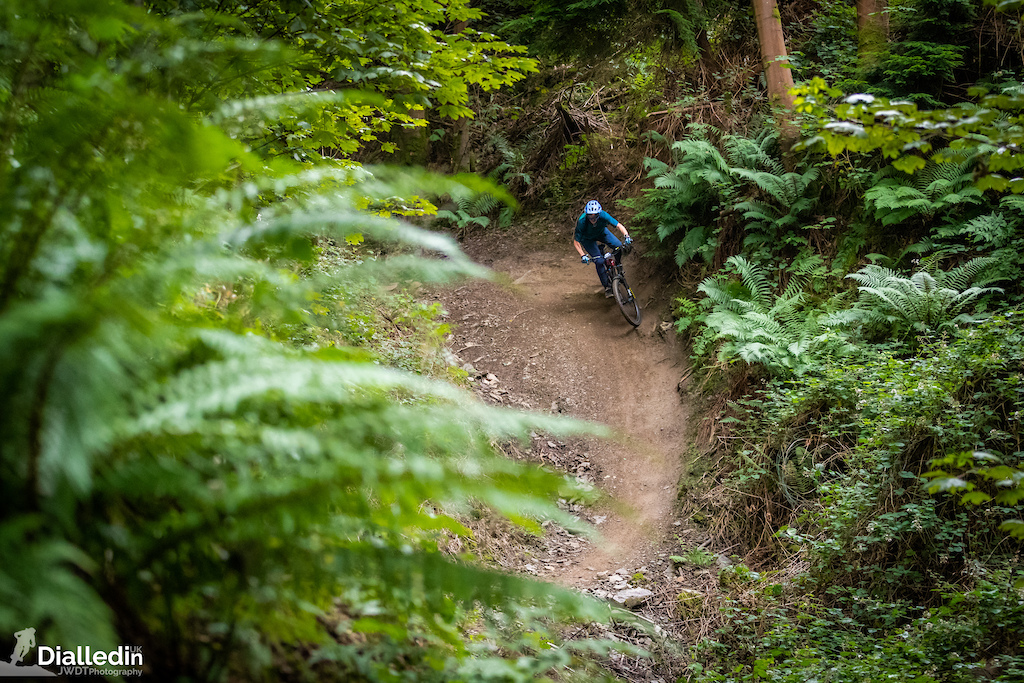 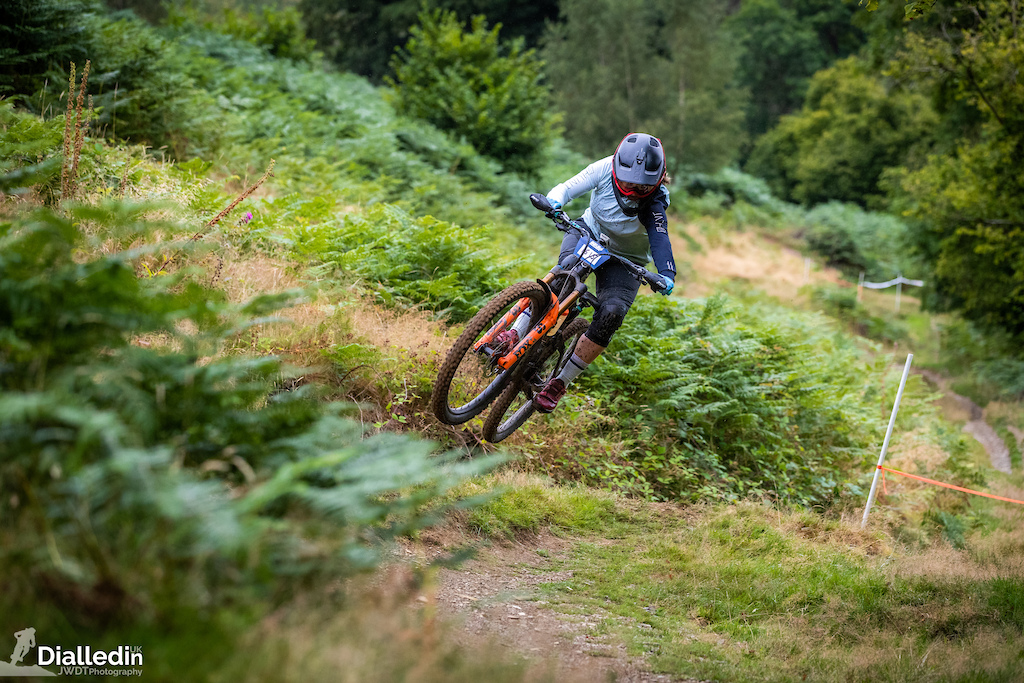 For a full rundown of the results and to see where you faired head over to either roots and rain or at SPORTident where you will also see the Hardtail results. What a weekend this was and a huge shout out to the marshals, medics and organiser for putting on such an incredible race. A big thanks goes to Martin the owner of the venue, it was great seeing him out and about all weekend, if you want more information about One Giant Leap then head over to their website for more information and club membership. It's not the sort of place you turn and ride, you'd need club membership and you can even provide your own uplift if so desired.

If you want more information about upcoming PMBA Enduro Series races then head over to their website or Facebook. Next up will be Kirroughtree, their Scotland venue with a superb camping field and great facilities suitable for the family too. Here is also your EWS rankings and qualifier results 2021 global rider rankings and qualifier series races 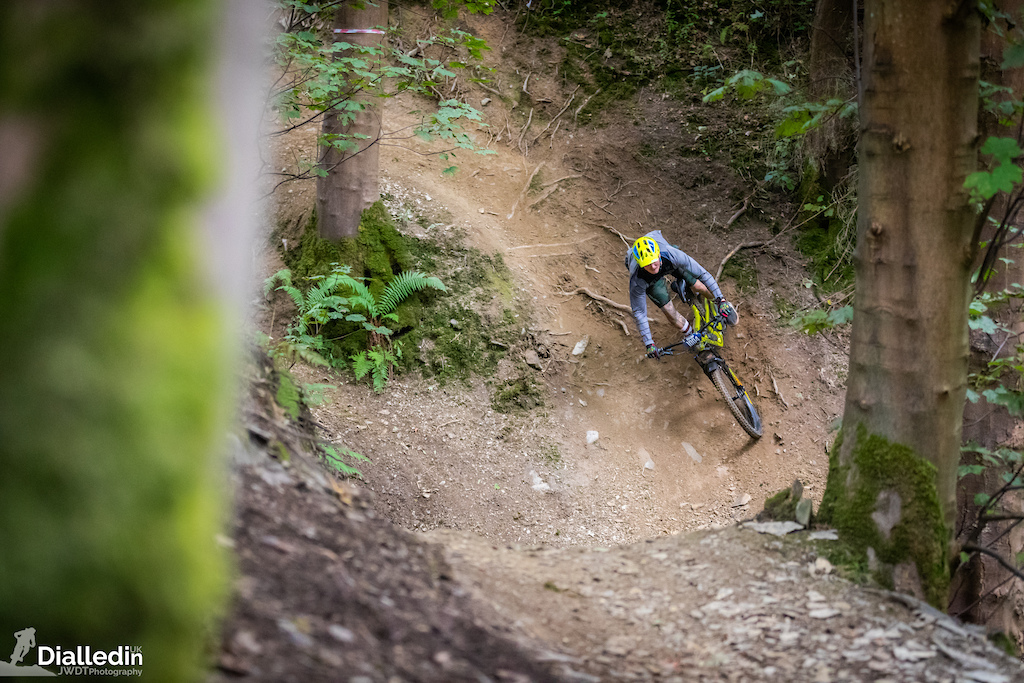 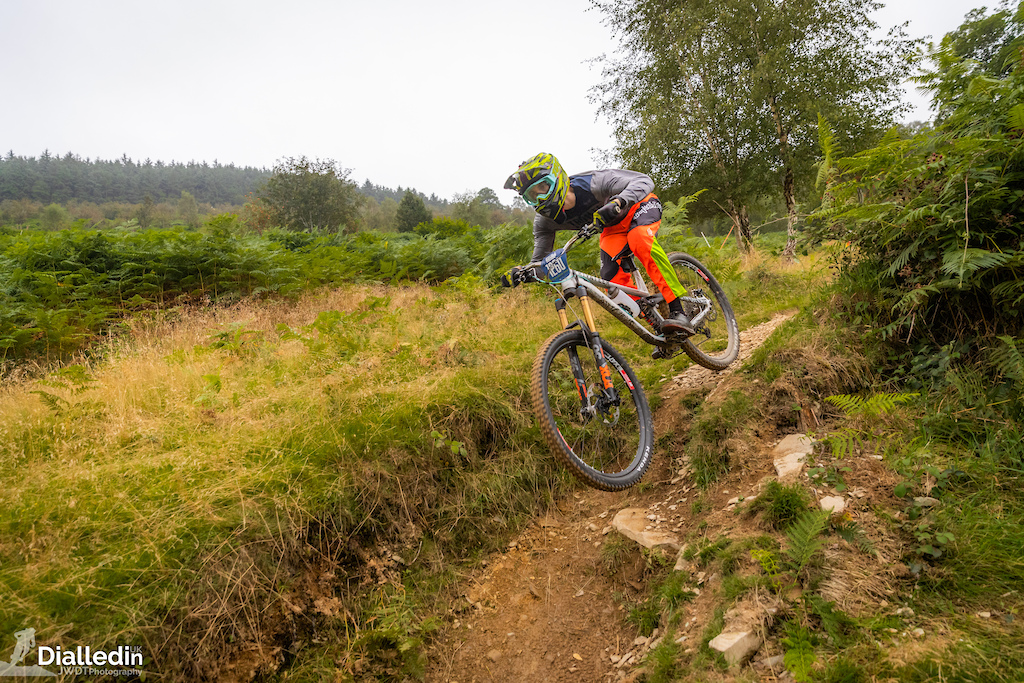 Dropping into the long straight on st 1 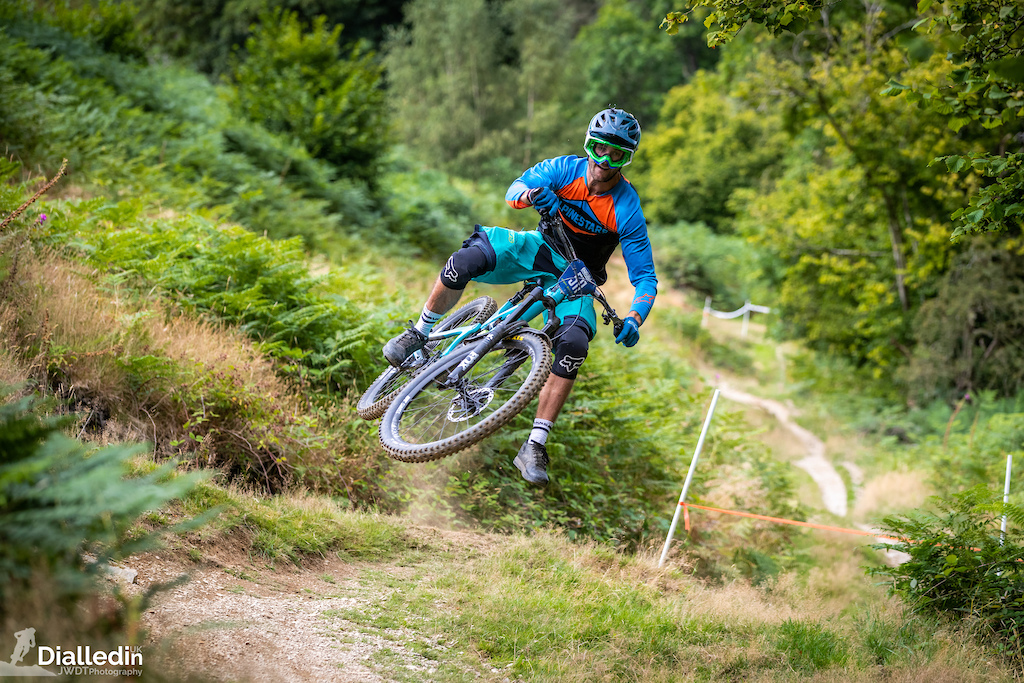 Not quite the time for Hamish Adamski to lose his pedal, but he save it! 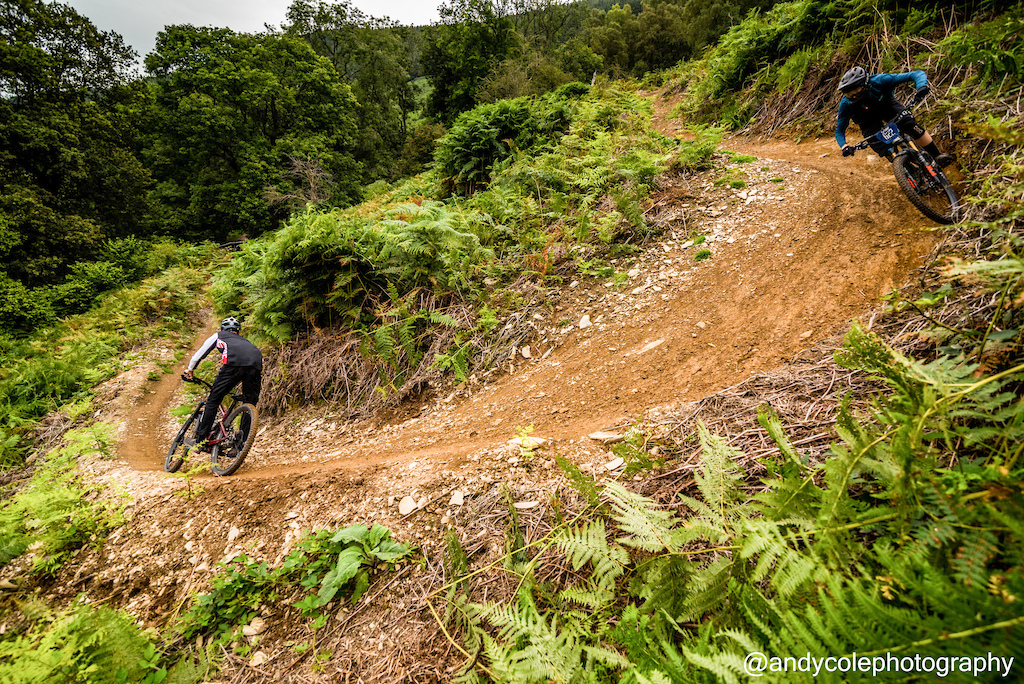 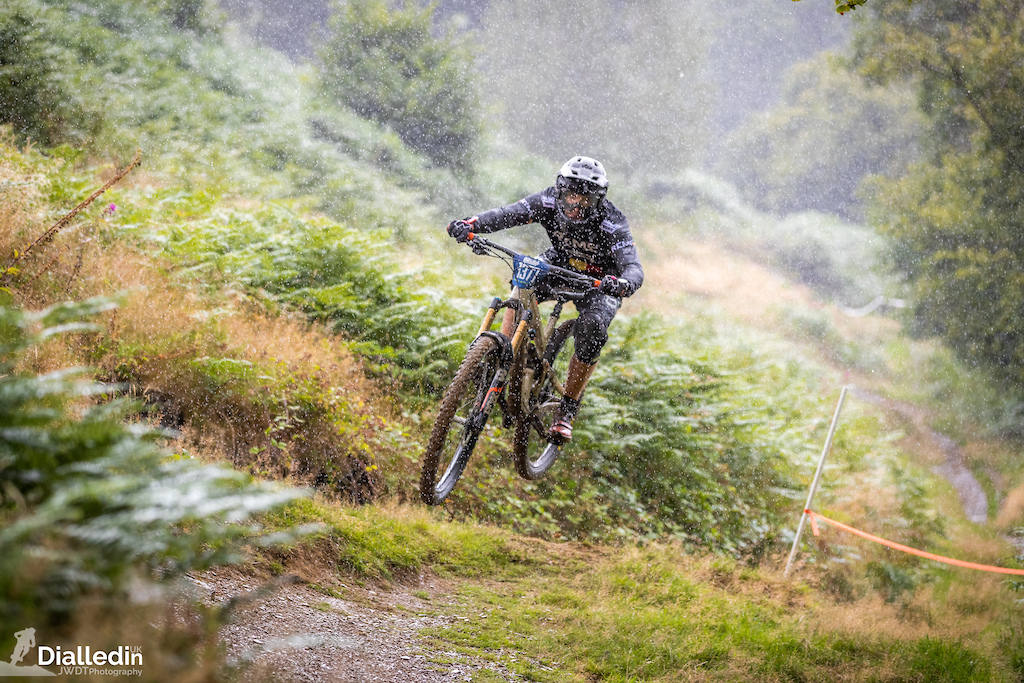 and then the rain came in 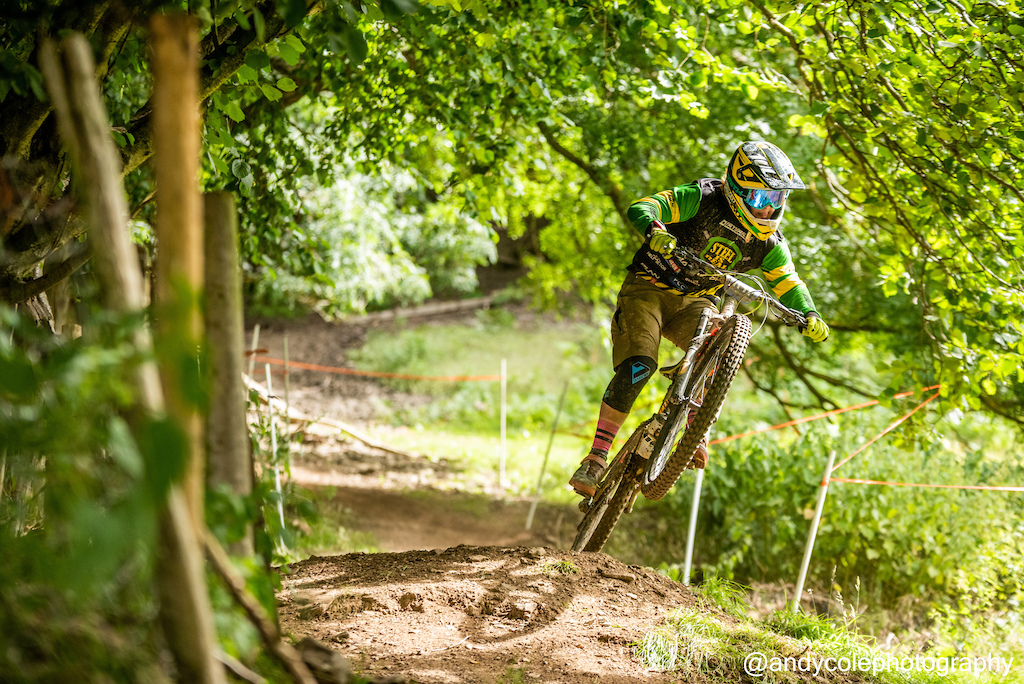 And we have lift off 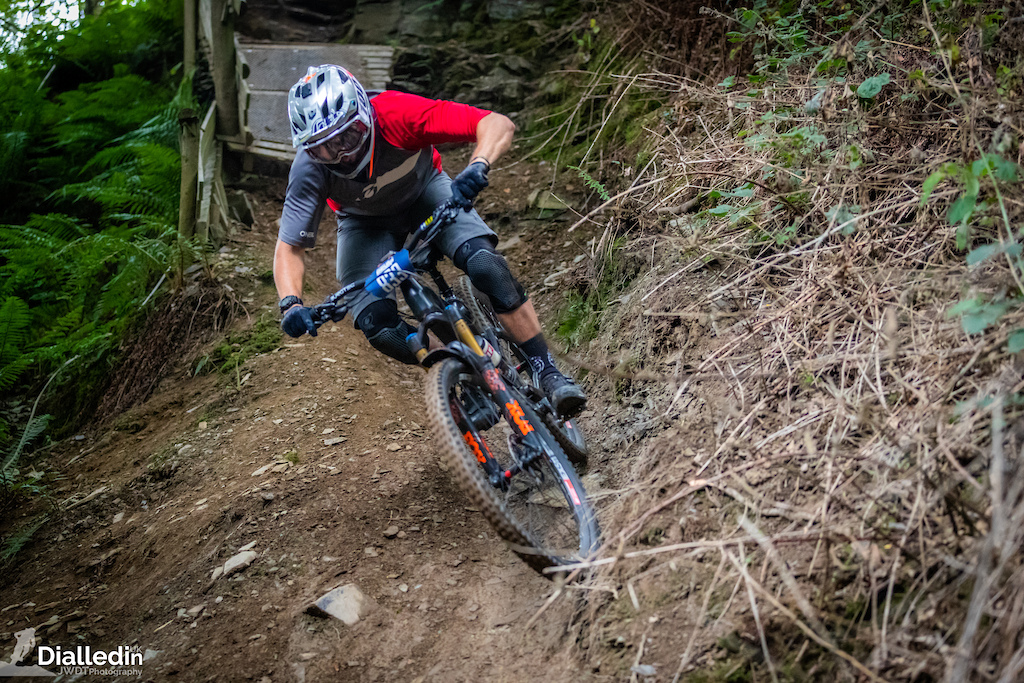 Myles JAMES staying off the brakes through the steep. 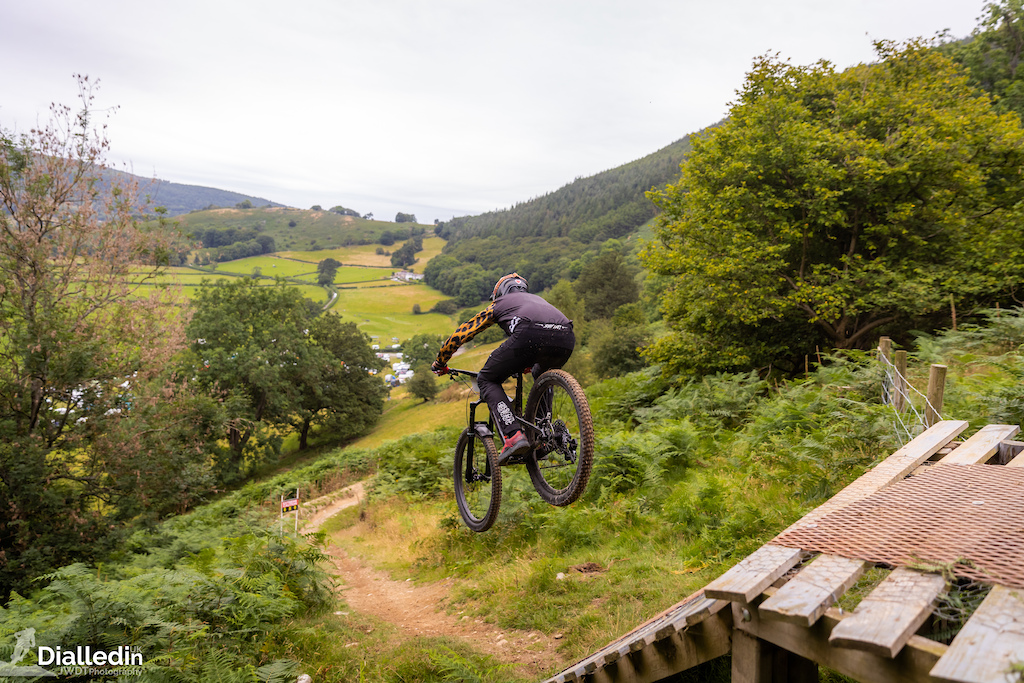 Stage 5 and the end is in sight 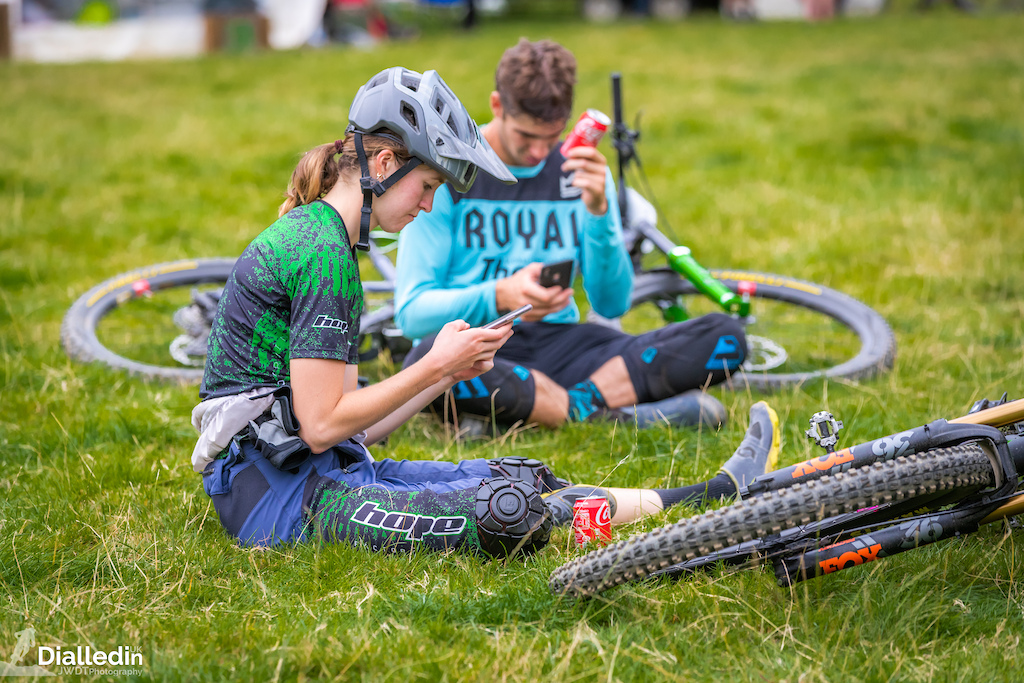 Ffion JAMES - annnnnd relax
That's a wrap for now, a huge thanks to PMBA for another banging event, Andy Cole for some super imagery and Ben Gerrish for the super slick video. See you at Kirroughtree.

mountainsofsussex (Aug 18, 2021 at 0:49)
Awesome weekend, with some serious trails - even the "easy" stuff is sooo fast, the consequences of bouncing off line are big. And as for the gully section in the rain...... The photo of Riley Scott does not do justice to how steep that feels dropping in there with the rocks and ladder all wet and slick. Everyone that got round deserves a pat on the back. As does Kev, for all the work that went into making it happen!

Karenscoops (Aug 18, 2021 at 8:37)
My son Mason Williams competed in this enduro for the first time he had done one of these and said it was seriously hard work but came 68th out of 114 finishers in his group and he’s probably the only one with one leg super proud ☺️

ryandodgeshaw (Aug 17, 2021 at 16:13)
Absolutely loved it! Great weekend of riding gnarly trails, making friends and memories. Definitely coming back next year! Cheers to that made it happen, legends.

mountainsofsussex (Aug 18, 2021 at 8:24)
Glad I'd done a couple of local events this year to help get my head in the game, even if they didn't really compare to Llangollen...

pmbaenduro (Aug 18, 2021 at 10:18)
@mountainsofsussex: really is something else, Graythwaite is equally hard but a totally different challenge compared to these very fast very rough DH tracks.

mountainsofsussex (Aug 18, 2021 at 13:45)
@pmbaenduro: as a rank amateur, I'd say that overall Graythwaite is technically tougher (esp last year with the mud), but doesn't have anything as scary as the top of the ride Portugal gully in the rain, is less physical and maybe less "high consequence" stuff. Both cracking races.