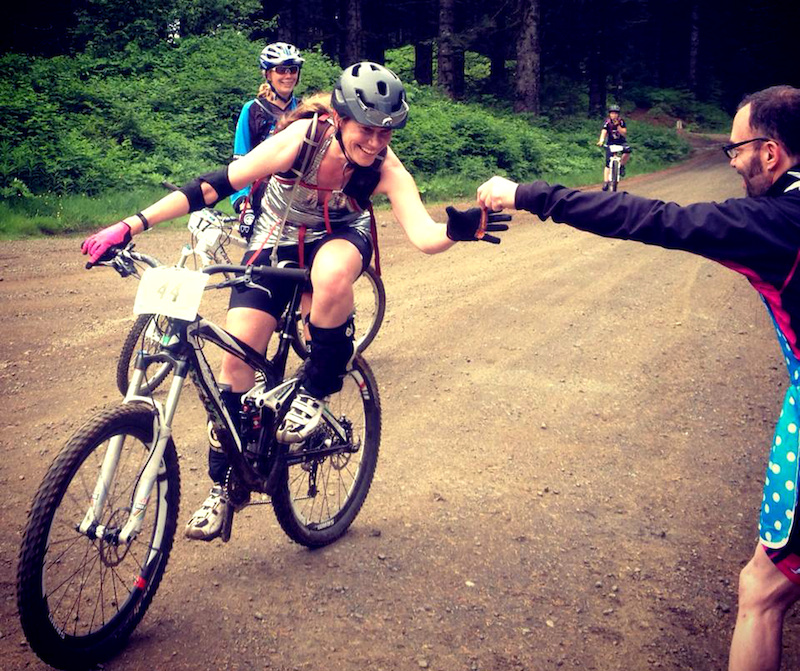 "Are you Enduro enough?" It's a cheeky insider joke and quasi-challenge seen on many a tee-shirt, bumper sticker, blog post and youtube video, and until recently it's been entirely the province of the Endurbro, aka the DudeBroBrah. But if the success of this weekend's inaugural women-only Sturdy Dirty Enduro is any indication, the landscape of Enduro racing is changing, and it's got as many bras as it has bros. 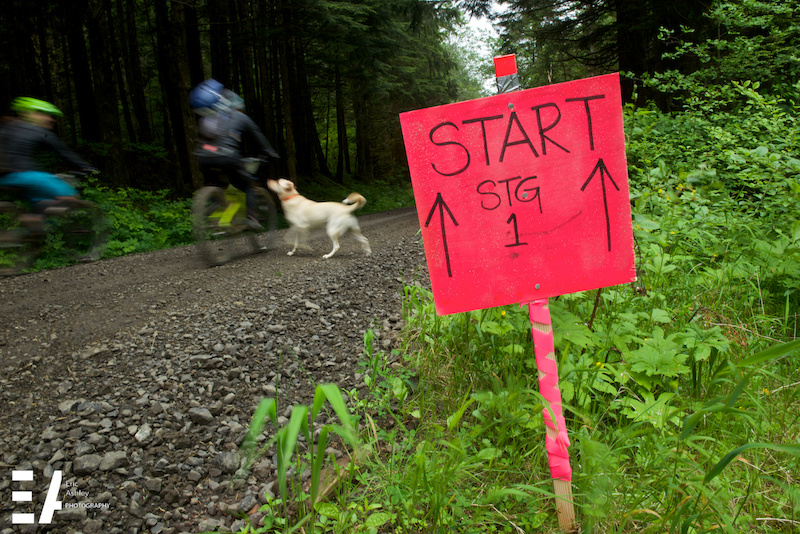 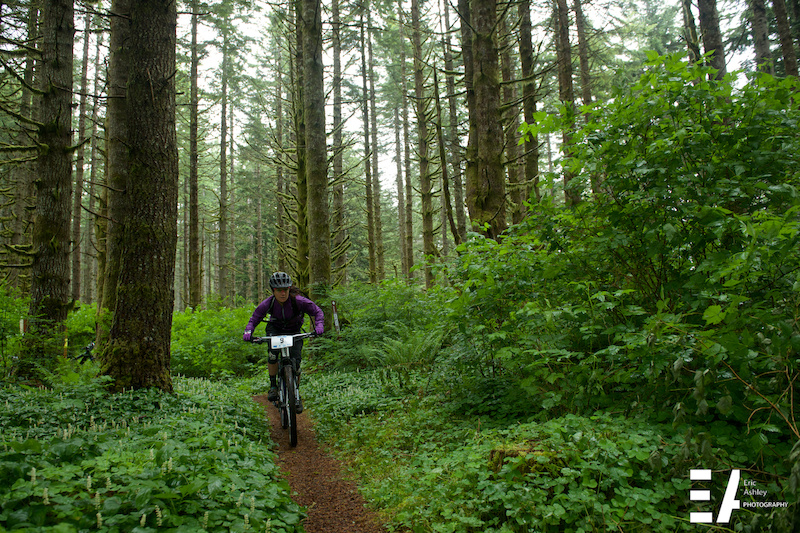 Deep in the Pacific Northwest's Capitol Forest, just two hours' drive from both Portland and Seattle, the four stages of racing were as varied as they were gorgeous, which would also be an apt description for the racers. A whopping 125 women registered for the event, including 53 beginner, 58 amateur, and 14 pro riders. Among the beginners and amateurs, many reported this was their first Enduro race; and quite a number of beginners said it was their first bike race of any kind. 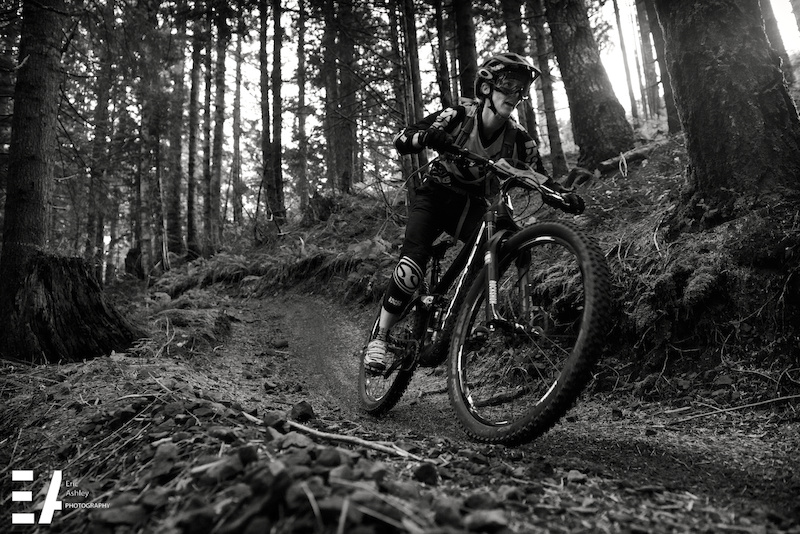 Organized by Seattle's Sturdy Bitch Racing, the race was a perfect entrée into the sport for the Enduro-curious. The course featured four varied stages which combined smooth, fast cross-countryish terrain on Stages One and Three, while Stages Two and Four offered up technical descending to keep riders on their toes. 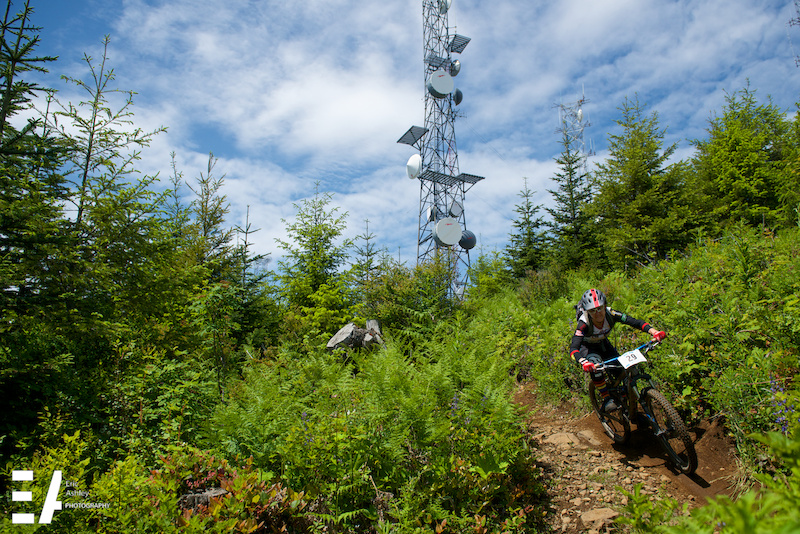 A section of Porter Trail kicked off the race with a short but fast, pedally singletrack no more than 12" wide in most spots. Stage 2 featured steep, technical berms, ball bearings on hardpack, baby heads and a small rock garden. Stage 3 dished up a flow trail with serpentine turns through tall grasses and favored power riders over technical skills. The final stage wrapped up on Little Larch Mountain trail with big, bermed turns and many opportunities to catch air over jumps, doubles and pump track features, ending in a steep technical finish with more options for airing it out over big roots. 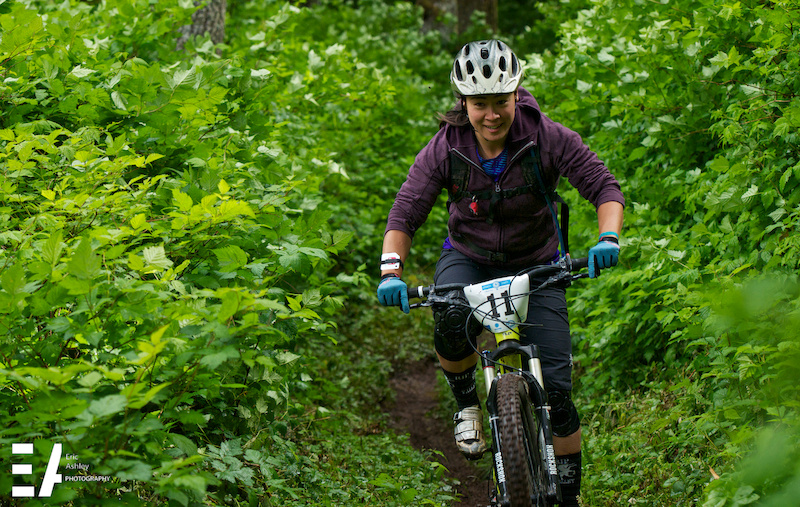 As with all Enduro events, only the four stages were timed, while the transitions permitted a more relaxed—if not leisurely—ride between timing stations. Most of the transitions were gravel road climbs; one notable exception was the Stage 2 transition which began as a fun, flowy stretch of cross country singletrack. I caught on with Team Danger Pony out of Coquitlam, British Columbia and we rolled a faster-than-slow but slower-than-fast train through the lush emerald forest. As we rode, we chatted casually, expressing our appreciation of the trails, the forest, and how the untimed transitions provided a unique opportunity to sit up and take in the scenery. 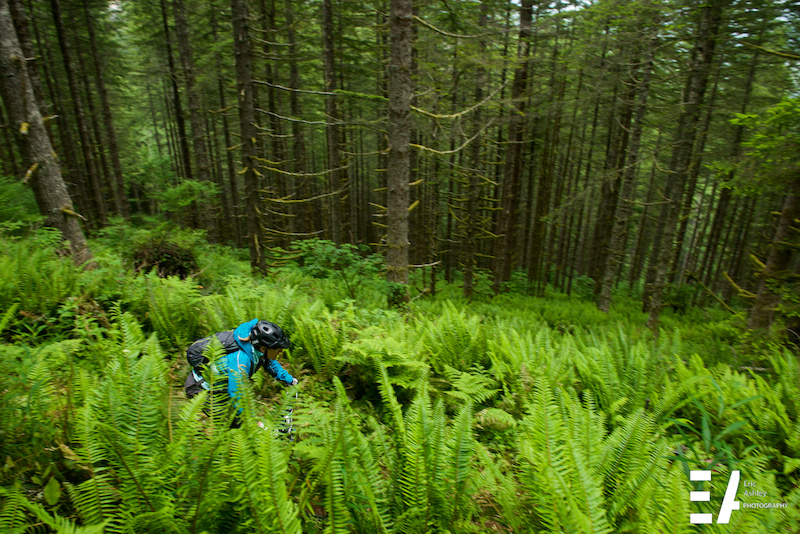 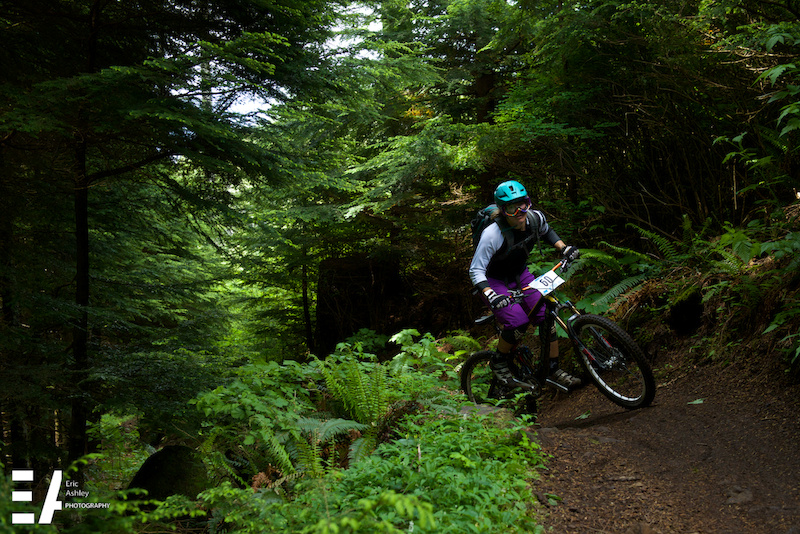 It's this unique combination of timed all-out competitive stages with relatively relaxed and social transitions which give Enduro racing its own particular flavor. At this particular event there was a perfect balance of business up front and party out back; those wanting to pin it and win it did so with commitment, determination, power and skill, but transition time was party time, for ALL the riders. The crew of over 80 volunteers staged some of the most entertaining aid stations I've seen at any competition and all of them appeared to be having as much or more fun than the riders. 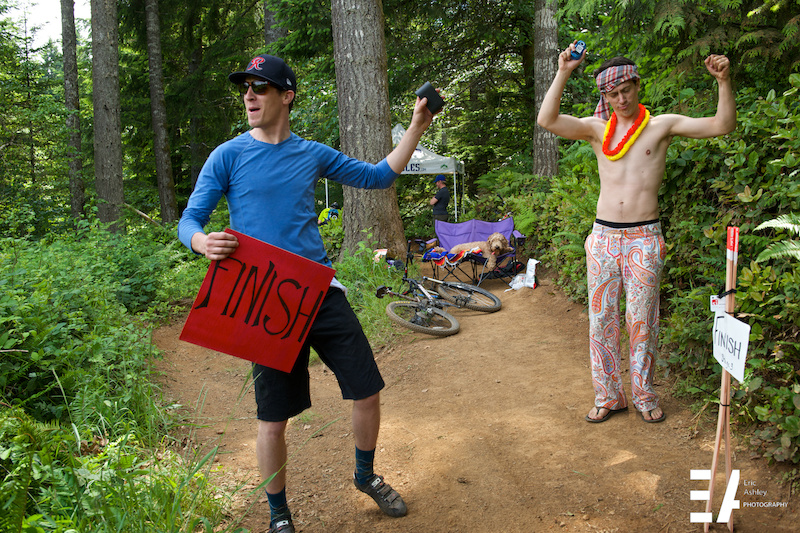 Among the entertainment at transitions and timing stations were half-naked Vikings, less naked Spartans, bacon handups from pasty white guys with biker tan lines in kitchen aprons and trucker hats, and hydration wisdom from the "Nuunicorn". My personal favorite was Epic Racing's aid station on Transition Three, complete with foot spa, shoulder massages, and dance party.

Utilikilts, miniskirts and sugar shorts seemed to be the official dress code for the 95% male volunteer crew; there were more men in drag at this event than a night out at CC Slaughter's. If the scantily dressed hunky men weren't enough to slake a dirty girl's appetite, the food at each aid station was sure to satisfy. From fresh waffles and bacon to homemade German Chocolate macaroons and coconut blondie bars, to the post-race barbecue lunch with vegan and gluten free options and 15 different flavors of bundt cake…it's highly likely more calories were taken in than expended. Everything was top notch—true gourmet quality—but completely unfussy about it. In fact the aid stations were so well stocked with tasty vittles, nary a Shot Block or gel was used during the race. 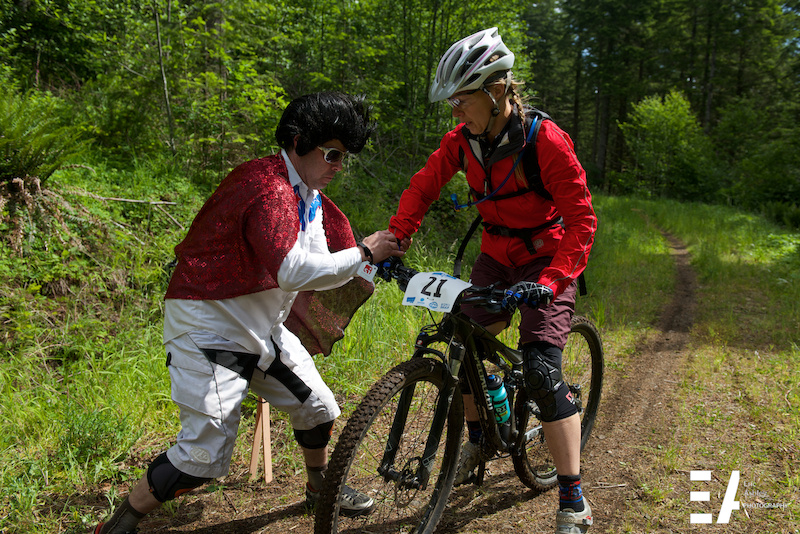 Event organizer and Team Sturdy Bitch member Ady Bee Lane credits the Hot on Your Heels enduro in Squamish, BC with the inspiration for the event. “We thought the concept might be a hit locally, given the growing interest in women-specific mountain bike events", said Lane. "We also wanted more women to try racing so they’d come hang out with us at race events like the Capitol Forest Classic and the CDC Enduro series. Ultimately, we organized the Sturdy Dirty for selfish reasons.” 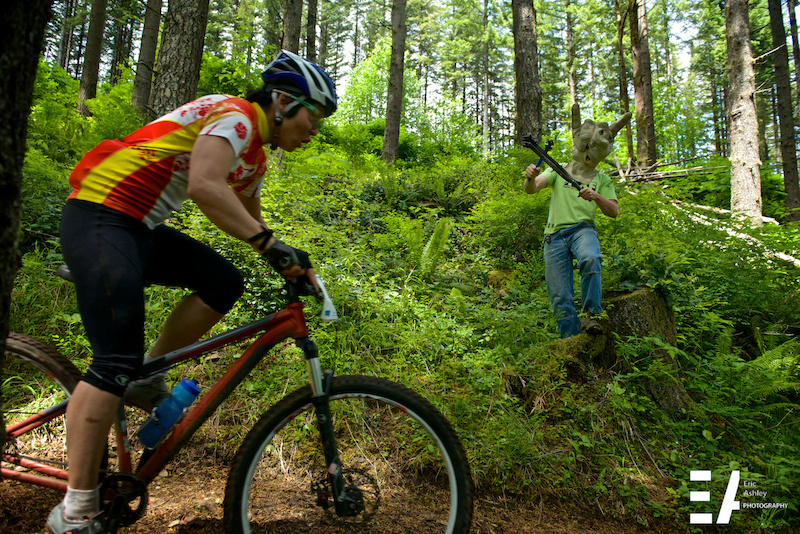 The group plans to reprise the event in 2015. Sturdy Bitch promoter Angela Sucich replied: “We are thrilled the Sturdy Dirty Enduro was so successful our first time out of the gate. Seeing big smiles on the faces of racers and volunteers makes all the blood, sweat and tears that went into the event worth it. Judging by the outpouring of volunteer and sponsor support, without which we could not have had this level of success, the mountain bike community wants more events like this. We are planning to do our part by hosting the 2015 Sturdy Dirty Enduro.” 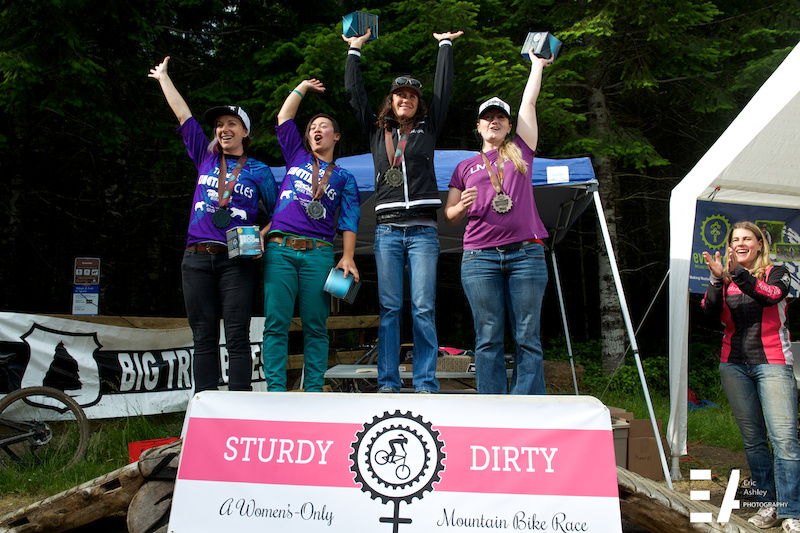 Pro rider Kelli Emmet (LIV/Giant and Giant Factory Off-Road Team) was the fastest lady on the course, clocking in at 28:31—over a minute ahead of runner-up Aja Philp (Team Danger Pony). Post-podium, Emmet had nothing but praise for the event promoters. "I thought the Sturdy Bitches did an amazing job putting the event together. Timing was done within a reasonable time. As soon as we finished racing, we knew where we stacked up against the other finishers. I felt like it was the best organized race I've done in the US, and a very reasonable price. It's a perfect race for women to check out Enduro racing." 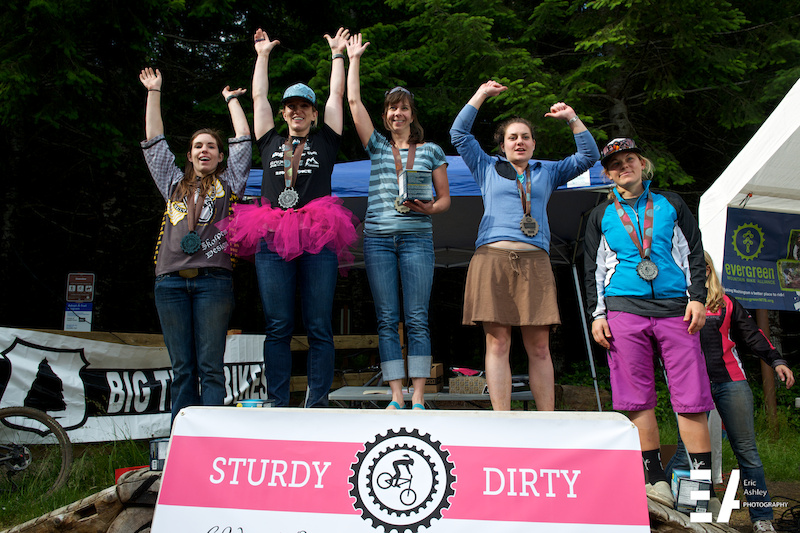 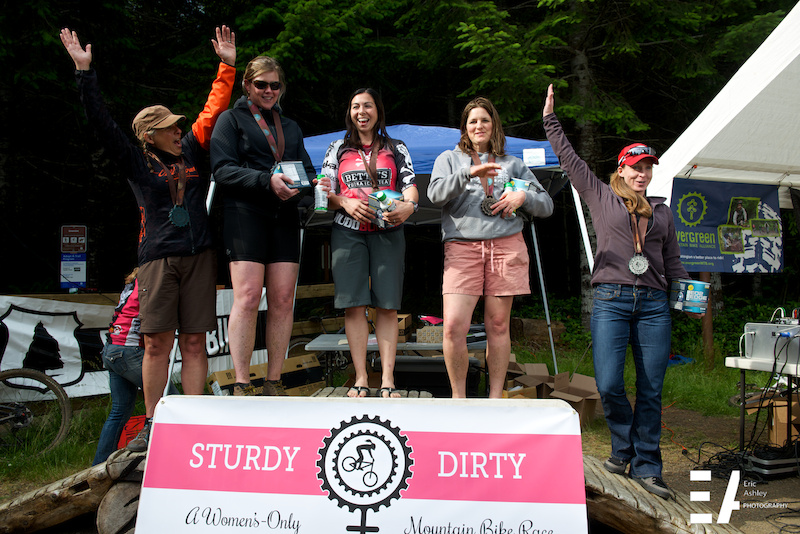 Race results for the event are posted online at www.sturdydirty.com. For more information about Team Sturdy Bitch visit www.sturdybitch.com

Posted by Üma Kleppinger—aka The Umabomber—mountain bike evangelist, cycling noise maker and freelance writer. When not out riding her bike, she can be found writing about life in the saddle, or vice versa. She lives in Portland, Oregon, and has unofficially adopted Sandy Ridge as her "trail baby".

gretabike (Jun 17, 2014 at 19:49)
Thanks Uma, love the report! Super stoked so many ladies enjoyed it, so proud of the Sturdy Bitch race team and happy to be a part of the event! Now get out to more races ladies!!

umabomber (Jun 17, 2014 at 20:46)
It really was a great event. Fun to both participate in as a racer, and fun to engage as a writer, talking to all the participants, volunteers and organizers about their experiences.

Glendmcc (Jun 18, 2014 at 13:25)
What a great event! I spent the day timing the final stage and everyone had huge smiles (once they caught their breath). The course was totally accessible to all riding levels, pros could bomb the whole course stuff, while beginners were empowered and not turned off.

This event was a great intro to racing for many, like üma said and will guarantee return racers. These chicks shred and can party. The way riding and racing should be!

umabomber (Jun 18, 2014 at 20:22)
The final stage was my personal favorite, but then I love catching air. The smoothest line is in the air, as the saying goes. Thanks for volunteering to make awesome happen!

mattsavage (Jun 18, 2014 at 10:56)
Why can't the mens races be this much fun? chicks are rad, doods are jerks... I'm totally gonna become the worlds first transgendered enduro racer now!

umabomber (Jun 18, 2014 at 20:25)
Matt! I don't know if I'd go that far. Chicks ARE rad, and while normally I LOVE riding with the boys I have to say I was super impressed with this event on numerous levels. My only criticism would have been that it could have been more technical (for me). I guess all those laps at Sandy are paying off. Now if I just had some fitness....

umabomber (Jun 17, 2014 at 20:48)
I think the only requirements for volunteers are a good attitude, comfortable with skimpy clothing, and must enjoy serving competitive women food and drink.

Sheepsheid (Jun 20, 2014 at 6:18)
"As many bras as bros?" What a load of sexist bulls***. Not even funny. Why is there a need for women only races? It just bolsters a load of misguided preconceptions.

umabomber (Jun 17, 2014 at 20:49)
If by participate you mean race, I think you might get some grief, but if you mean serve the lovely ass-kicking wimmins on bikes then do it!!!

umabomber (Jun 19, 2014 at 10:06)
It's the timed stages of mtb races version of "bike-curious".
Below threshold threads are hidden

mrgonzo (Jun 17, 2014 at 18:36)
good thing you put this up. not enough people were taking enduro seriously. hopefully now people will start respecting it.

mrgonzo (Jun 17, 2014 at 18:38)
good thing you put this up. not enough people were taking enduro seriously. hopefully now people will start respecting it.