Race Report: The Kiwis Held Their Own 'World Champs' 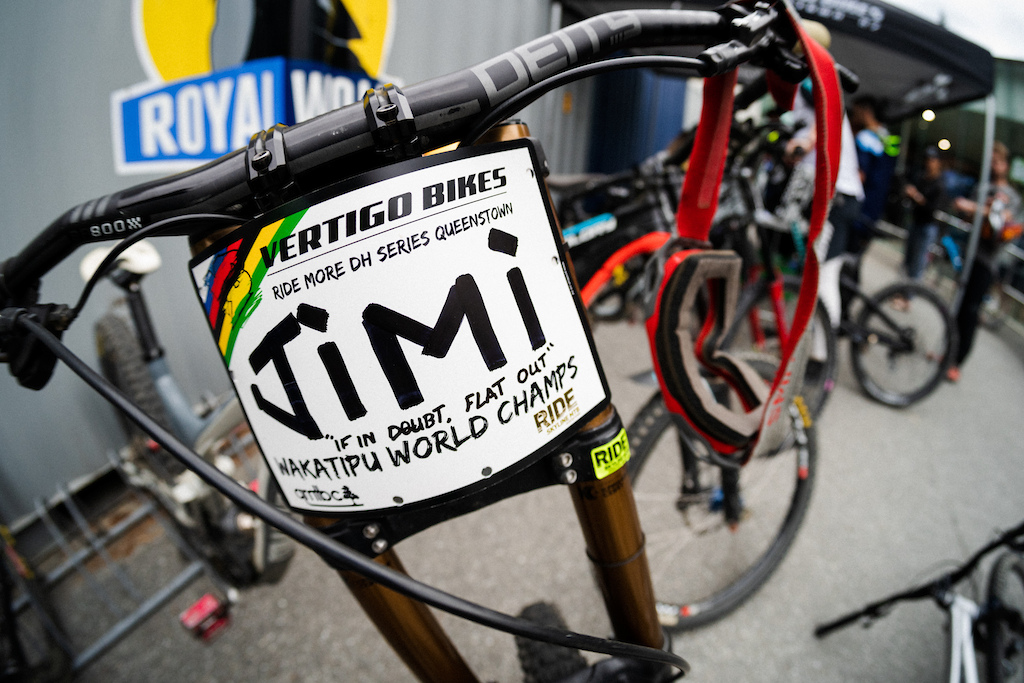 Wakatipu World Champs
Queenstown's Race Season Finale
We are all here for the photos I know, especially those of you in the northern hemisphere looking to fuel your riding froth waiting for summer to start. So I won't be offended if you don't read the article, but if you do, thanks. If not then enjoy the photo bangers courtesy of the talented Callum Wood (@cwoodphoto).

So, how good is downhill racing! As fun as modern trail bikes are you really can't beat swinging your leg over a dual crown 200mm travel bike purpose-built to help you focus your attention 100% on a taped out downhill track, finding lines, discussing lines, playing with bike set up, making excuses and ultimately trying to find that perfect run against the clock. During a DH race, the nerves and anxiety make you question why you do it but when you get a solid race run in the bag, giving it everything you have got, it is a feeling that is hard to beat and you can't wait to do it again. I have still to find something else that compares. 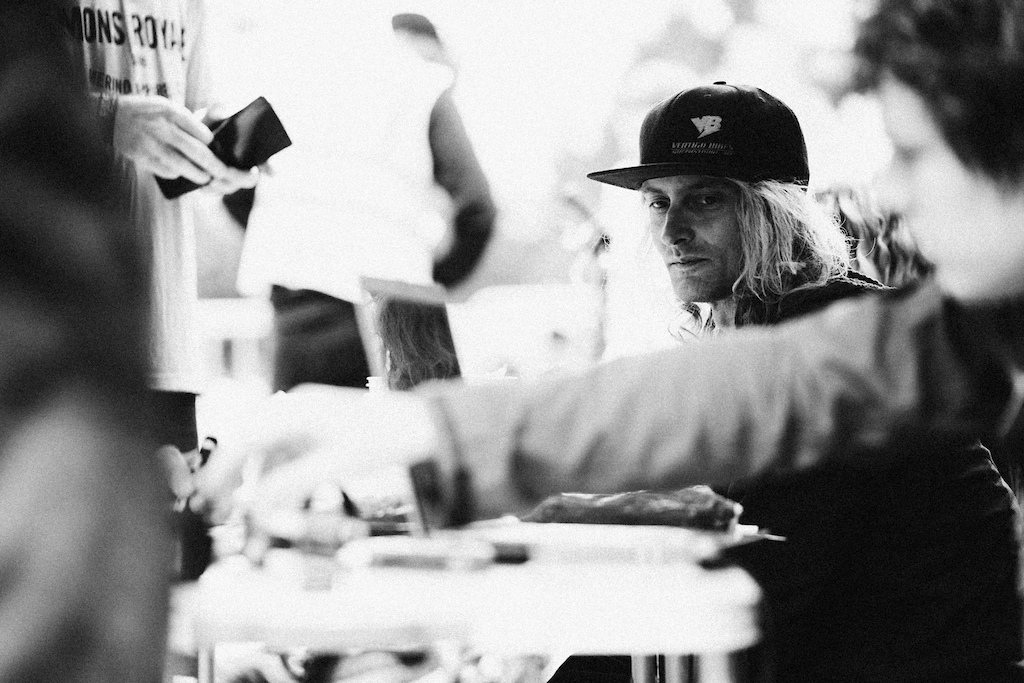 The man with the plan, Vertigo Bikes boss man Pang (Goose)
It is so important that grassroots racing exists, they help build the local riding community, spark new passion, give focus and act as stepping stones for aspiring racers to hone their craft. Running these events makes it so evident why local bike stores need to exist and why they need to be supported. If you have a local shop that puts the hard yards in to build community through events of any kind be sure to support them in some way, you won't realise how much you miss them until they are gone. All our events go towards raising money for the local Queenstown Mountain Bike Club and this year we raised just over $15000. All the money goes back into trail development and maintenance in the Queenstown area. 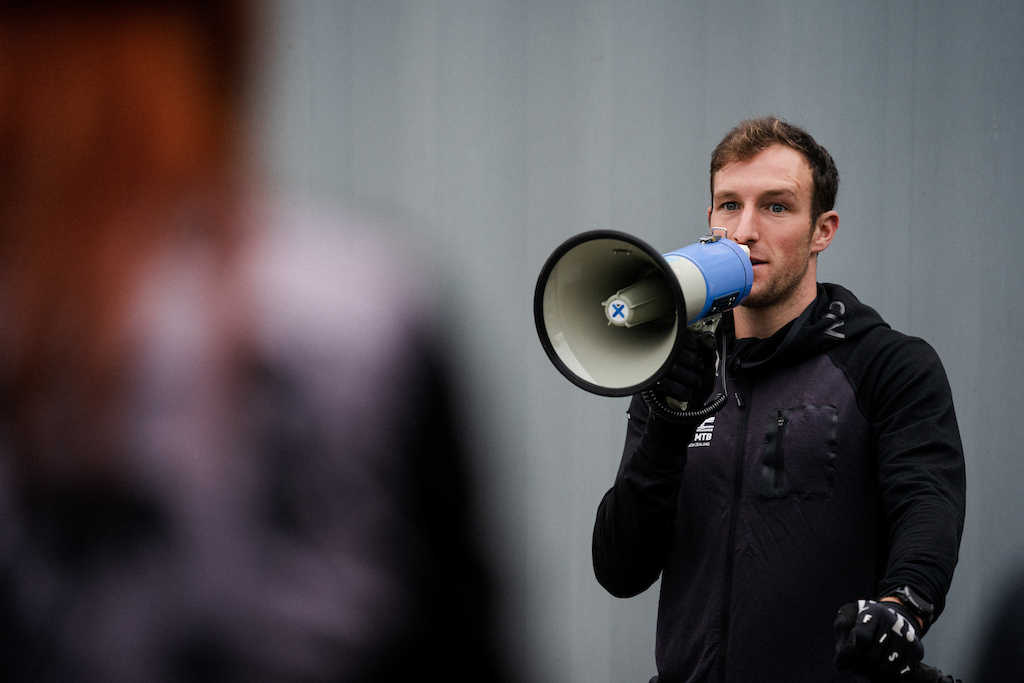 Jimi Ramsay of Skyline MTB and the man behind the tracks
As part of the Vertigo Bikes Ride More DH series this year we decided to make the final round not count towards the overall series and created the Wakatipu World Champs, a win it or bin race that gave you the chance to become the coveted "Wakatipu World Champion." We wanted to put that little bit of extra effort in to add to the fun and create some hype leading up to it. To make it seem more like a world champs we needed a few extra key ingredients. We needed to make it a one-run race, we needed split times, we needed custom world champs number boards, we needed to have the dreaded UCI start line beeps, we needed world champion trophies and we needed a race track worthy. 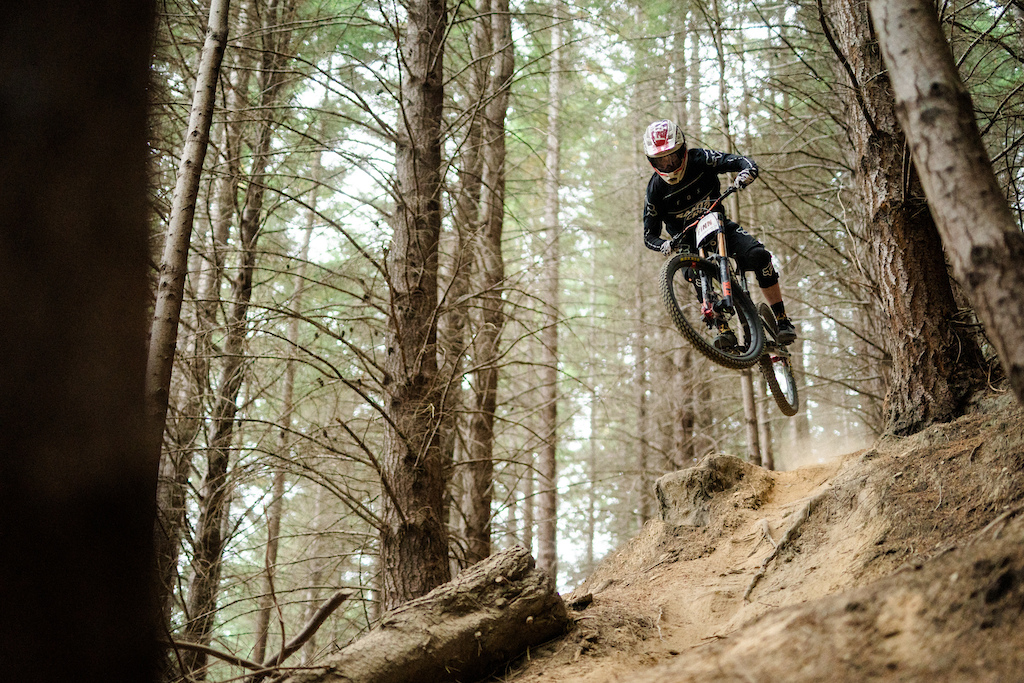 Finn HB pulling up, not out. Only a handful of people were hucking this step down
The Skyline MTB crew pulled out all the stops with the track. Cutting in fresh sections of trail and opening up some old pirate lines. The track was short and quite a direct line down the hill. The final chute was one we had used a few years ago and it's a great section of track that is easy for riders and spectators to get to. Which was another important factor, we wanted a crowd to build atmosphere. 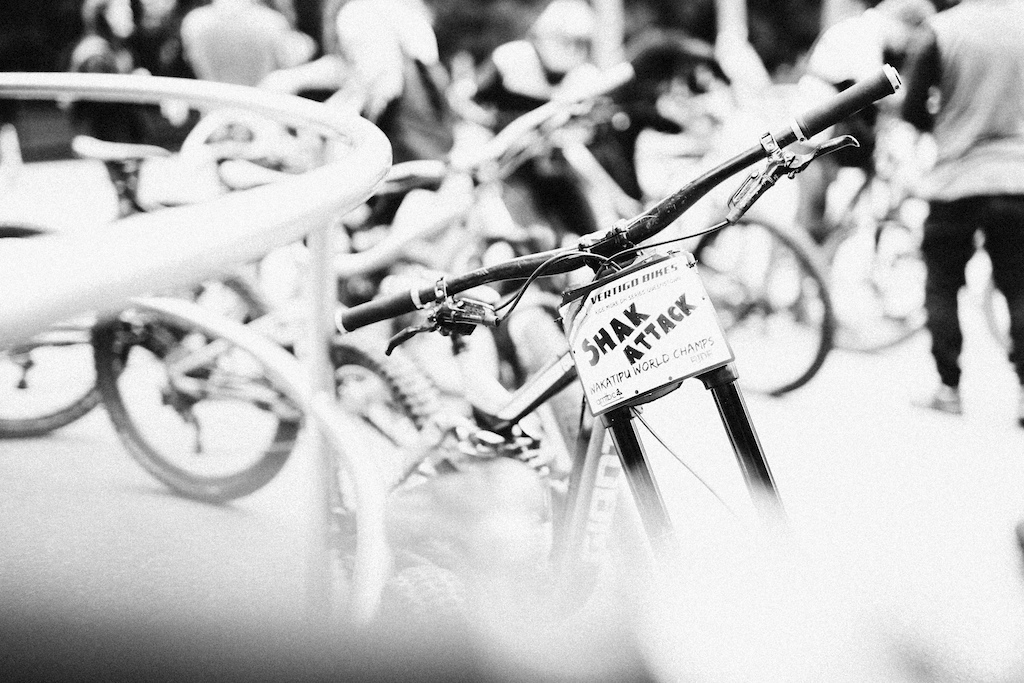 Get creative with your custom number board
On paper and upon first inspection the track seemed quite innocuous. But a long dry spell and a hungry bunch of world champs title hunters practicing the day before saw the track starting to get rough and blown out, like riding in 10 inch deep moon dust in spots. Great fun but very easy to make a mistake. Which on a track that was only a couple minutes long made it hard to know whether to play the safe game or go all out. 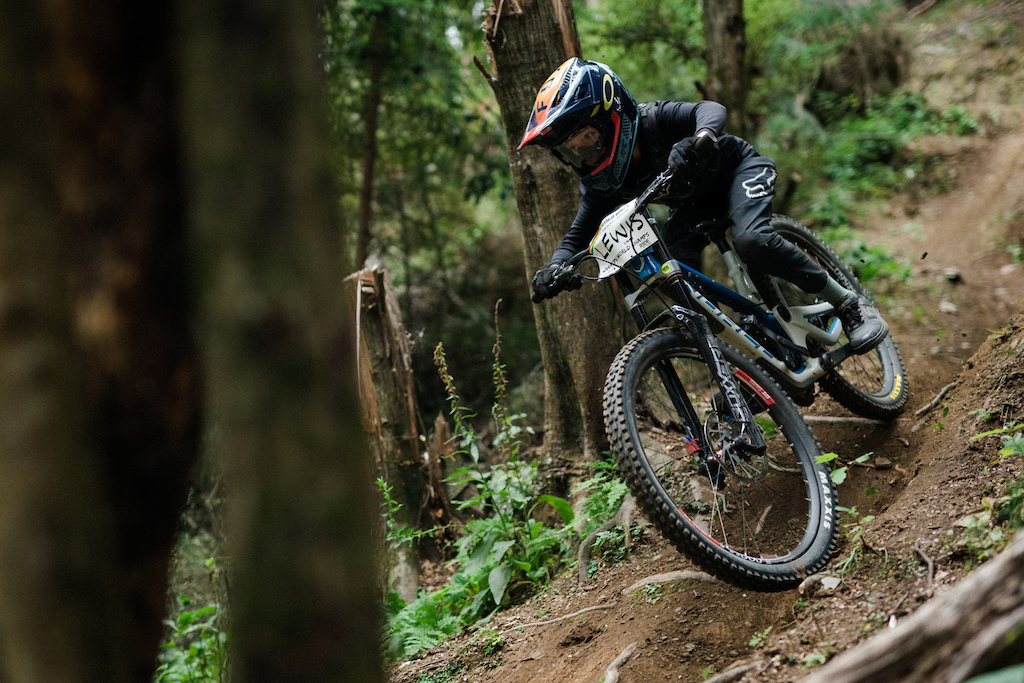 10 year old Lewis Laird riding with the confidence of someone twice his age, 2nd today in U13
The Queenstown riding community is something special. Pros and weekend warriors mix, ride and support each other, we are one big family and everyone is happy to do their bit to help the community in one way or another. We managed to secure the presence of Eddie Masters as official start line banter/heckle commissaire. I am sure he would have rather been racing but seeing as he is currently injured he offered to help out instead, what a legend. 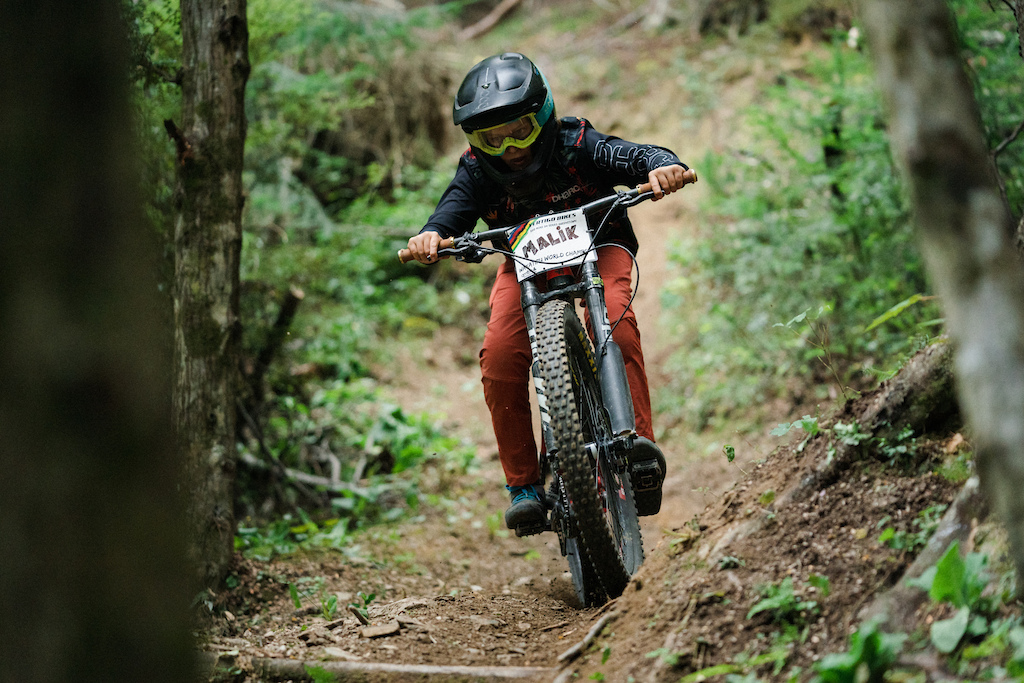 Hard on the brakes before the tight turn into the final chute, 1st Place for Malik Boatwright in U13, remember this name
The threat of rain in the forecast soon dissipated and it was clear we were going to be treated to a dry and dusty season finale. Just shy of ninety riders turned up to tackle the world champs track with the youngest racer being 8 years old (the grom talent is real in Queenstown!). The expert field was pretty stacked with lots of NZ's best riders in town and taking part including George Brannigan (taking part in his first Vertigo Bikes race). Always great to have these guys come along and get involved.
Sign on began at 9am with riders rolling in at a steady pace to pick up their custom Wakatipu World Champs number boards which they got to keep as a souvenir from the event. Who doesn't like to collect number boards for their man shed right! 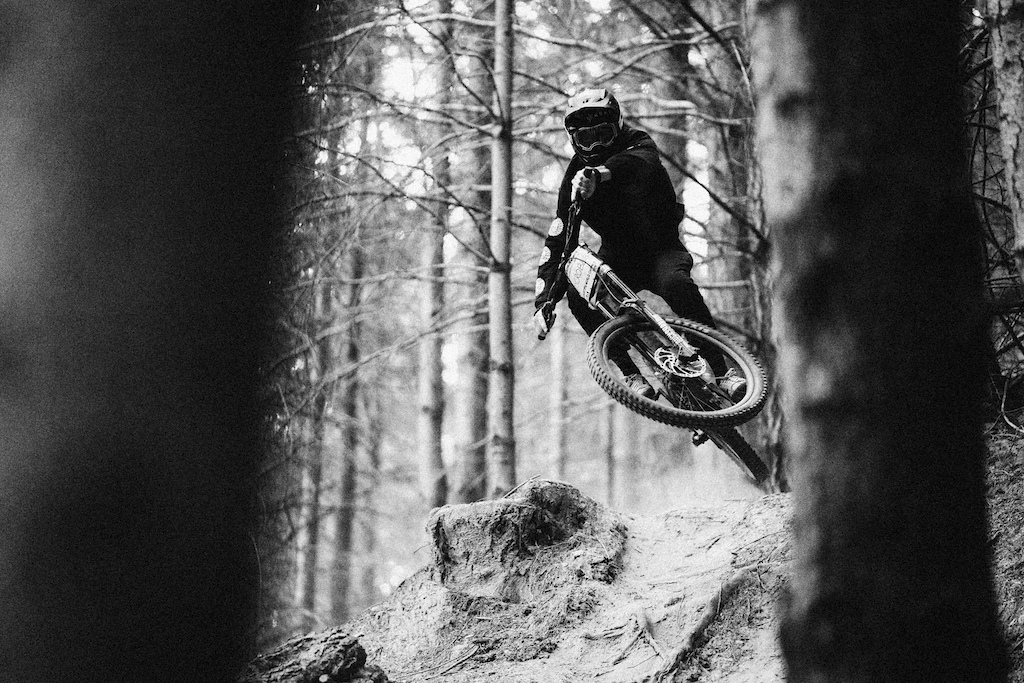 Scott Robb is usually on the other side of the lense, but he showed us today just how good he is on a bike too, 1st place in Open Men
After race briefing riders got practice underway. Riders had three hours of morning practice to get their final lines dialled on the ever-changing track. Fresh berms were getting blown out, corners getting pushed wider and wider and traction getting less and less. The term dirt surfing had never been more apt. The main thing was riders were grinning ear to ear after each run. 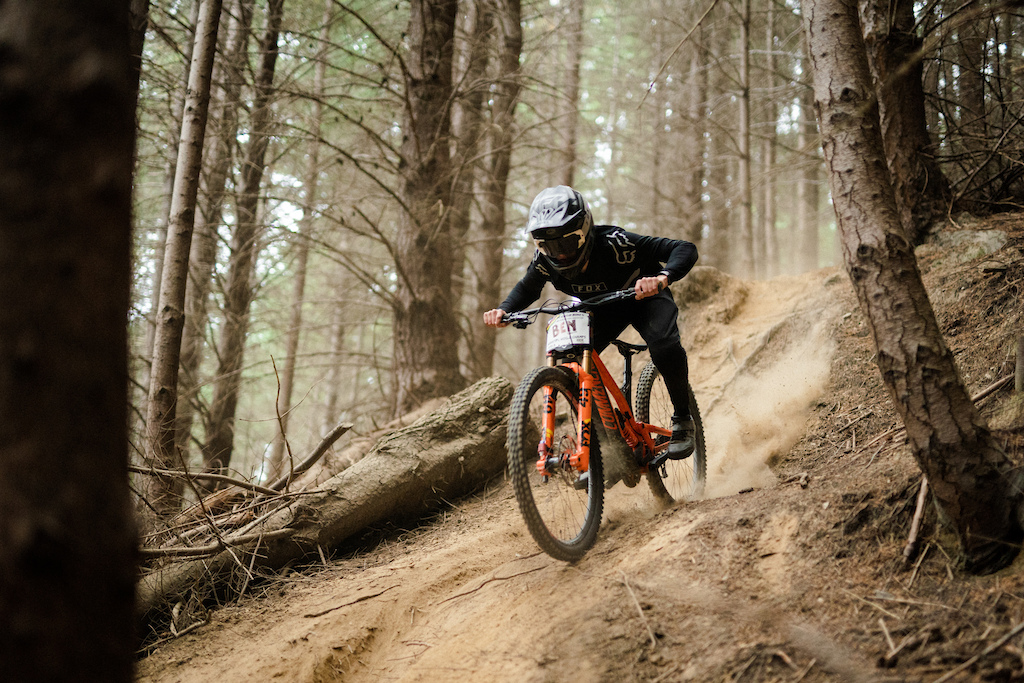 Ben Blewitt forms the second half of a talented brother and sister team, 2nd place today in U17 and a top ten overall fastest time
Racing got underway at 1.30pm. Eddie Masters had managed to hobble his way to the start line with his moon boot on. He was equipped with a megaphone and was swiftly getting amongst getting riders organised. We had an ipad tied to a tree with some innertube (kiwis love using old innertubes for stuff) with a video of the UCI start beeps that we had screen recorded of youtube. It worked perfectly and added to the atmosphere by making it feel like a proper start line. The nerves of hearing the ten second beep can't be described, but it certainly helps you focus and makes it feel very real. 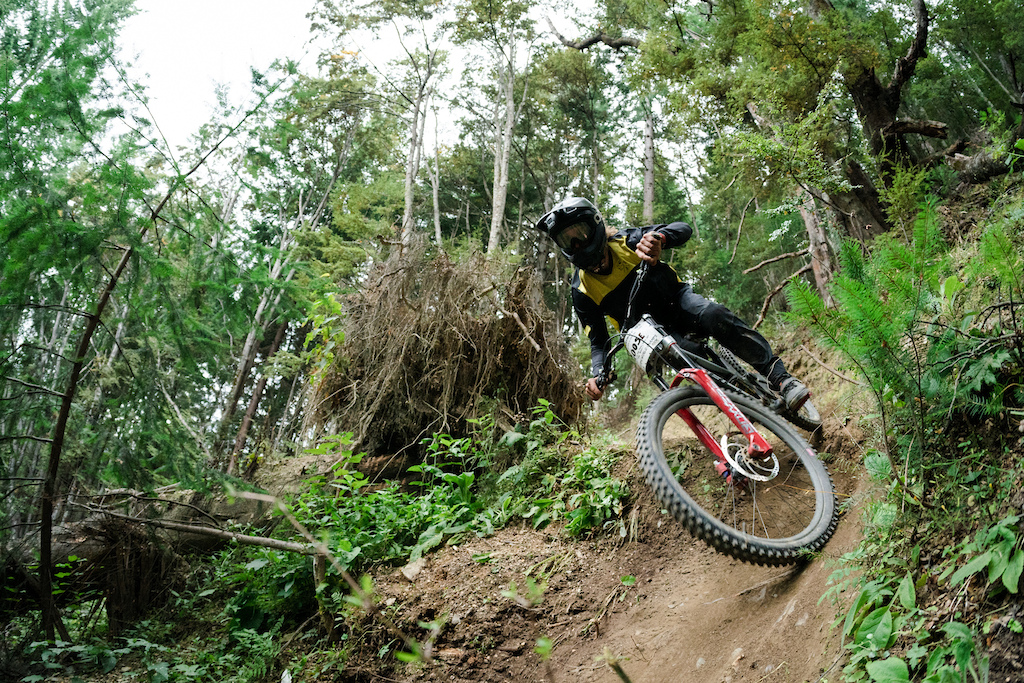 All about the prep, cut spikes for the win for Pang, 1st place in Vets for Queenstown's biggest race frother

It was a one-run format, bin it or win it. We had set up split times which cut the track into 4 shorter segments so everyone could get analytical on their run performance or use it to work out who was paying for the beers later. Either way, it was just an extra bit of effort to make the race feel a bit more special. 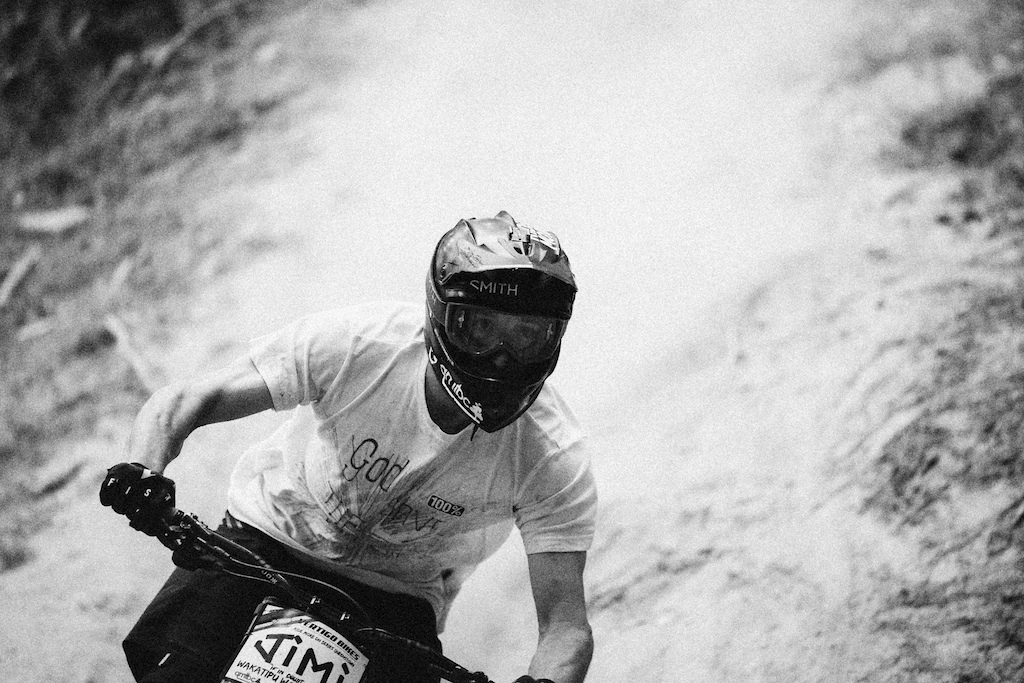 Birthday boy and co-organiser Jimi Ramsay had the crowd sing happy birthday to him as he rode the final section #community
In the end, it was Finn Hawkesby-Brown that took the fastest time of the day, pipping George Brannigan by just over a second with Boaz Hebblethwaite in third. The racing was super tight on this short and intense track which was awesome to watch and be a part of. The full results are lower down in the article for everyone to check out. If you go to @Vertigo_Bikes_Queenstown on Instagram and to our profile highlights we have a load of videos from the final chute of all the top guys riding, well worth a watch. 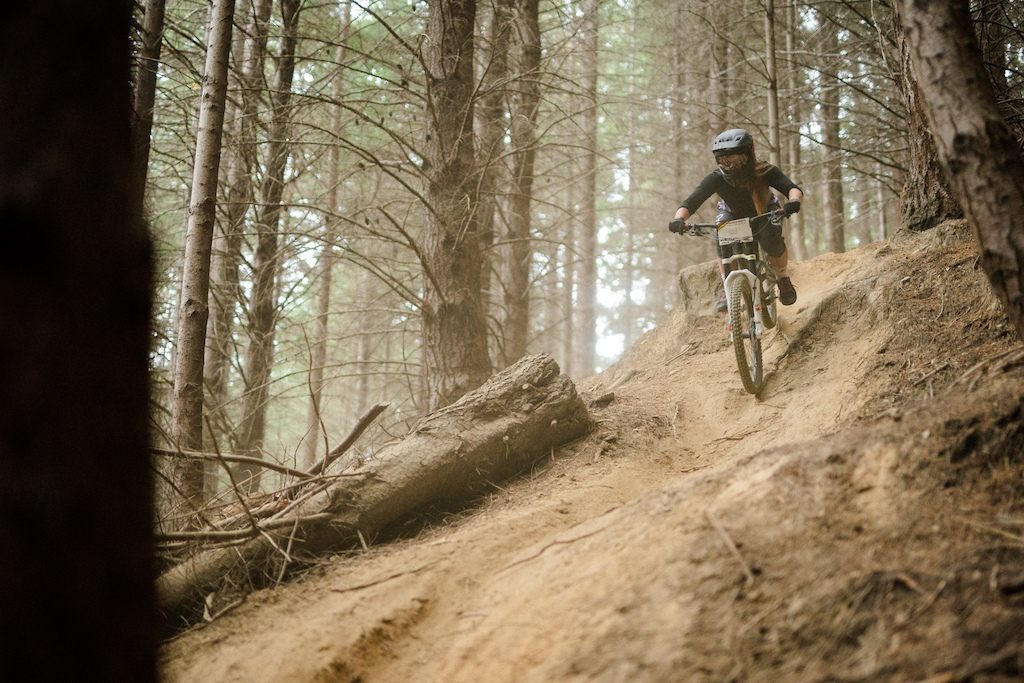 This was Nikki Atkinson's first race, she had only marshalled before and finally decided to give it a go and she was beyond stoked to have taken part and now has the racing bug, moments like this make it all worth it 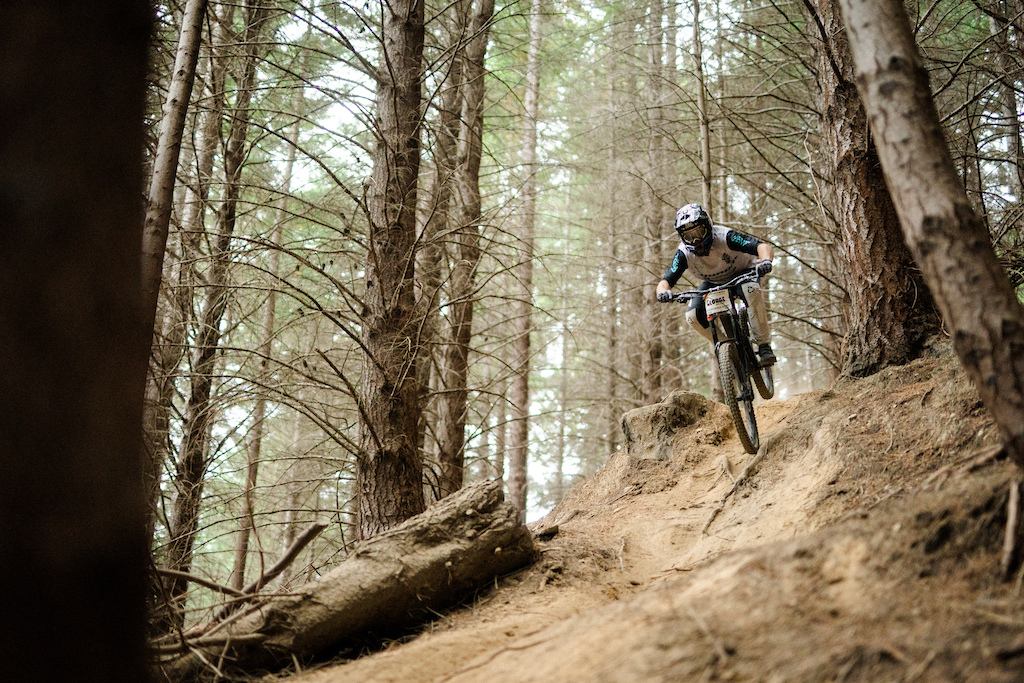 George Brannigan keeping it low on the first chute rather than hucking the step-down, he must have been taking the race serious 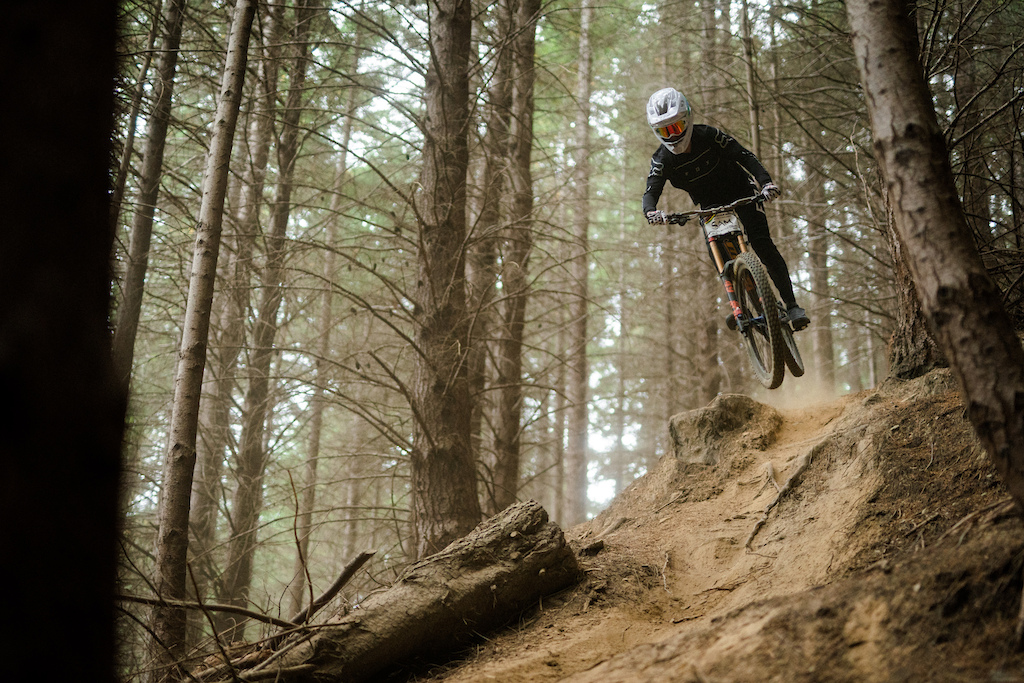 Sam Gale making the step down at the top of the track look easy, it wasn't big but the run out was fast and rutted into a flat blown out left 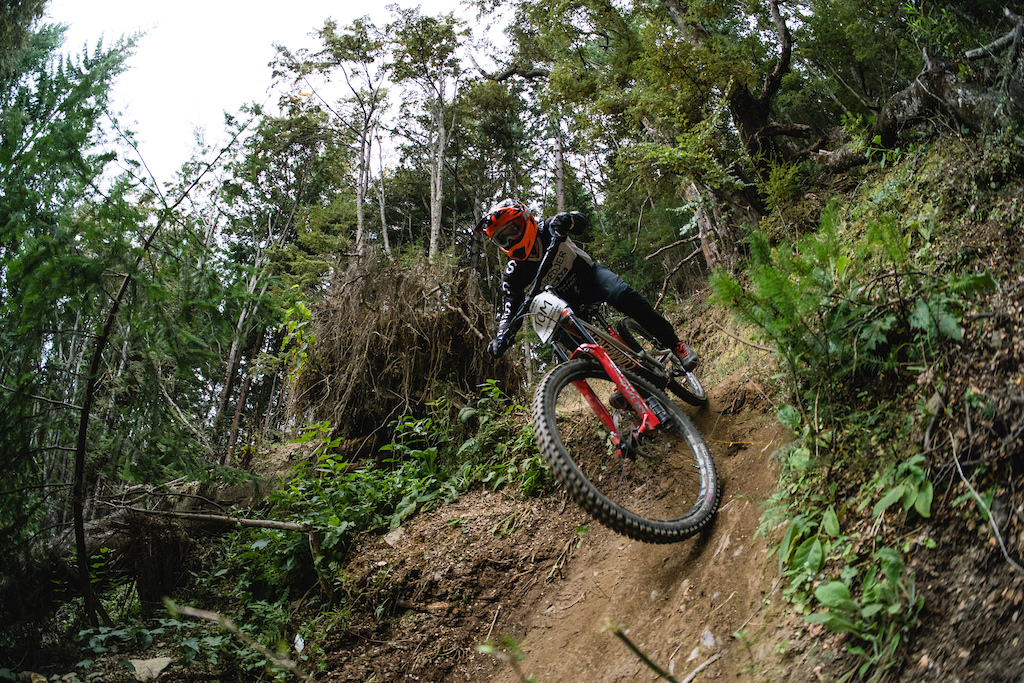 Three wins were by Scottish people today, funny given the lack of Scottish conditions, Tom Lamb 1st in Masters 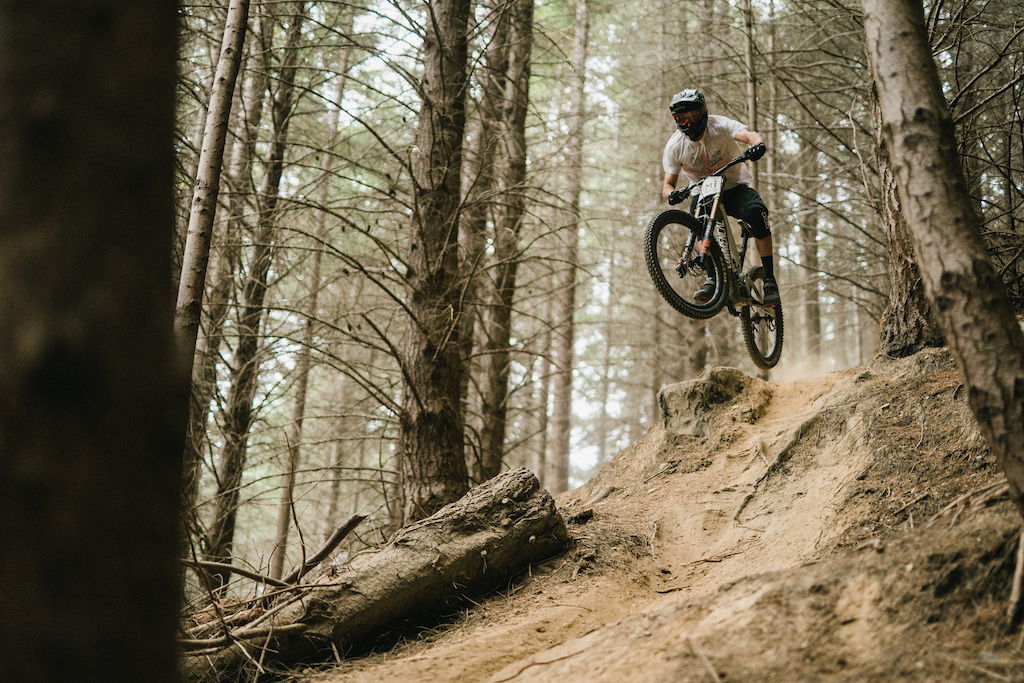 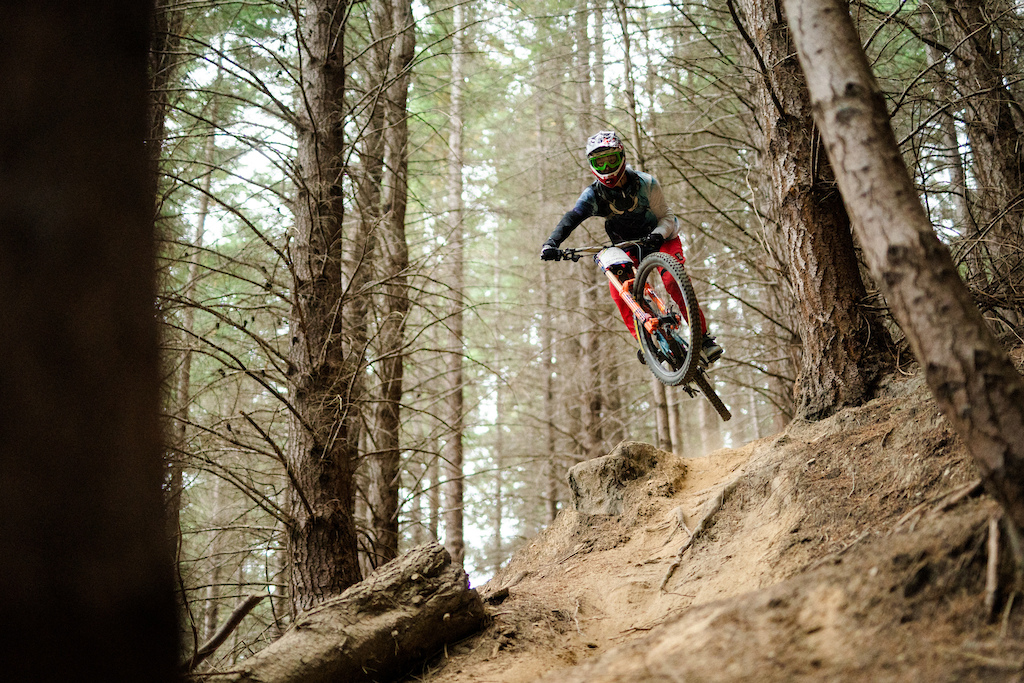 Toby Meek, so much natural speed and talent, 1st U19 and 5th fastest time of the day 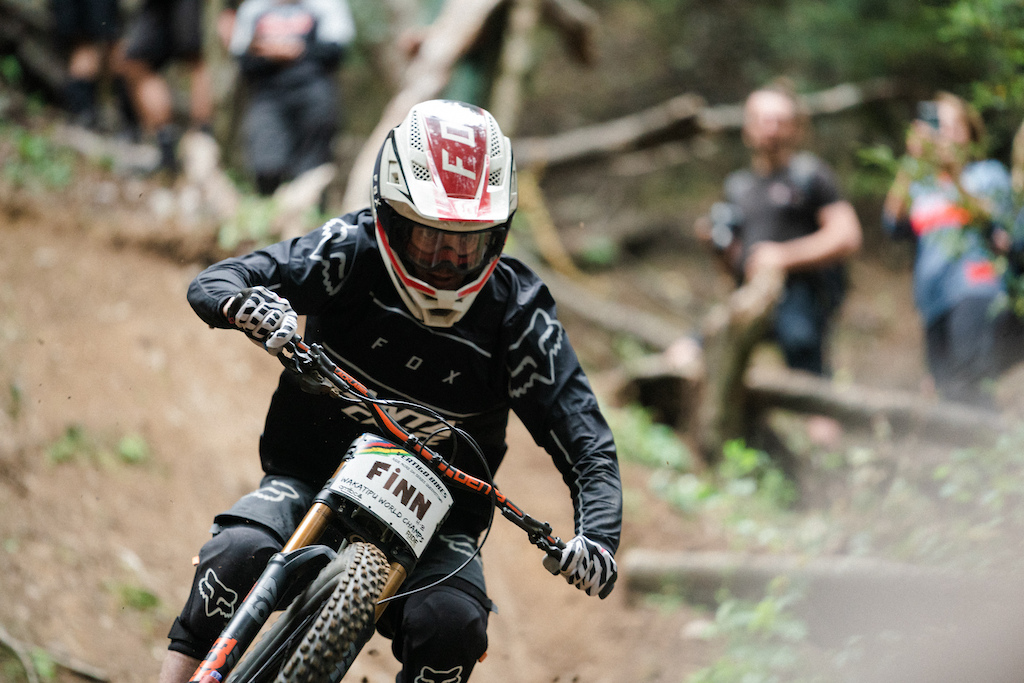 Eye of the tiger and the win for Santa Cruz's Finn HB taking the win over Brannigan by over a second, Finn also won best number board game, tidy job 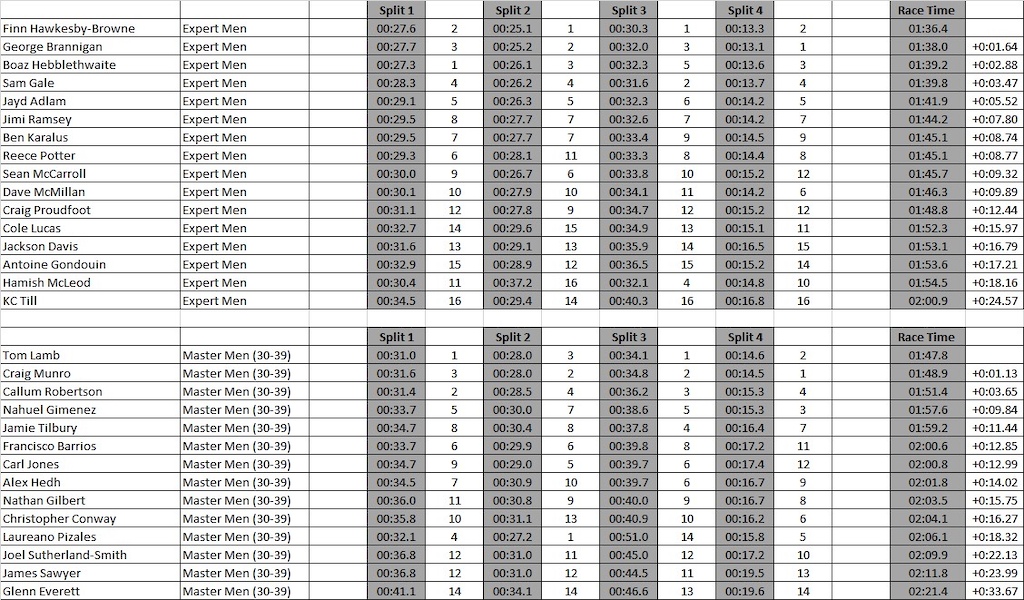 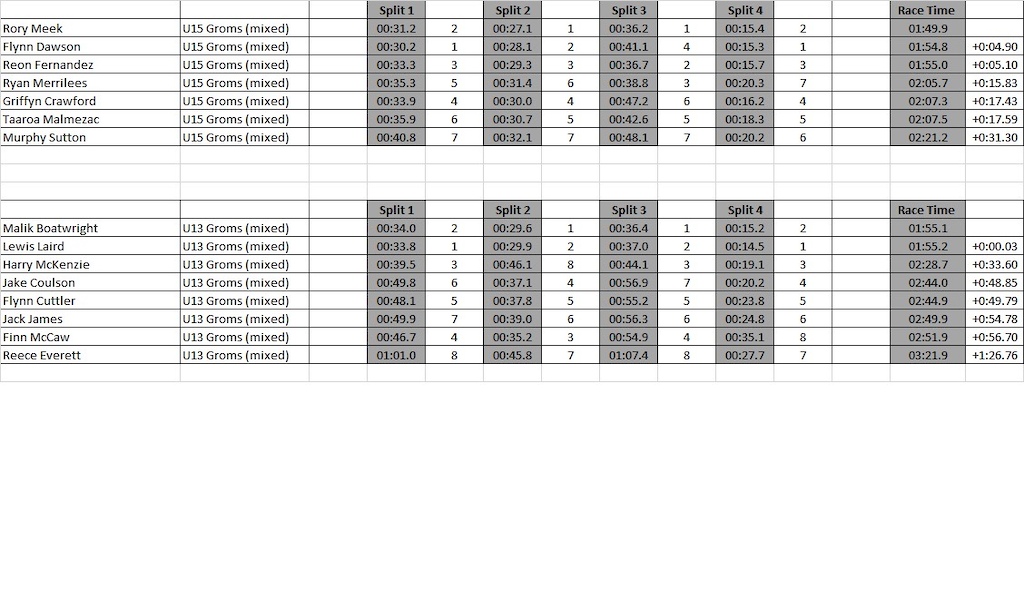 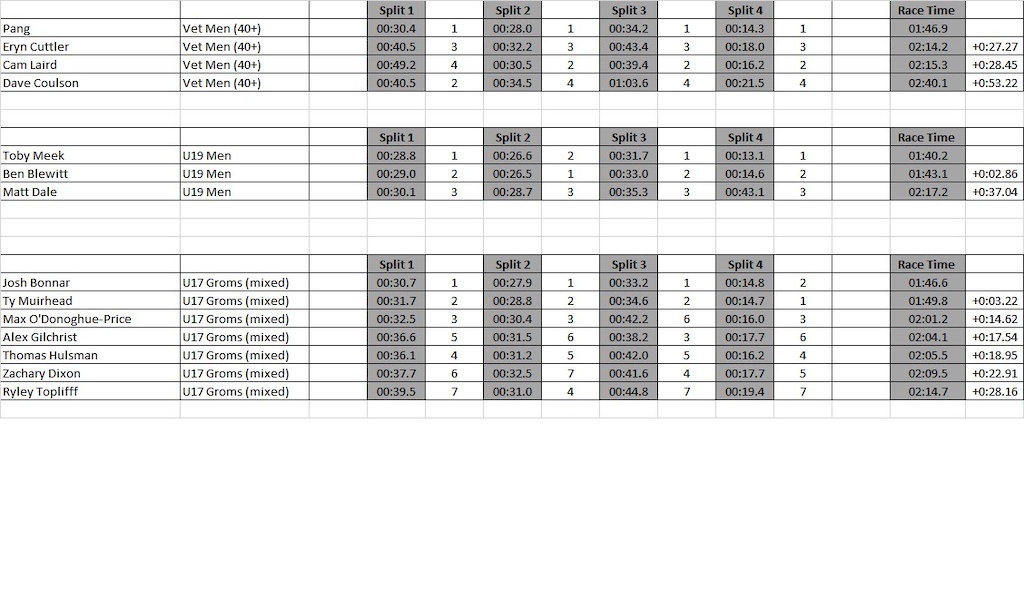 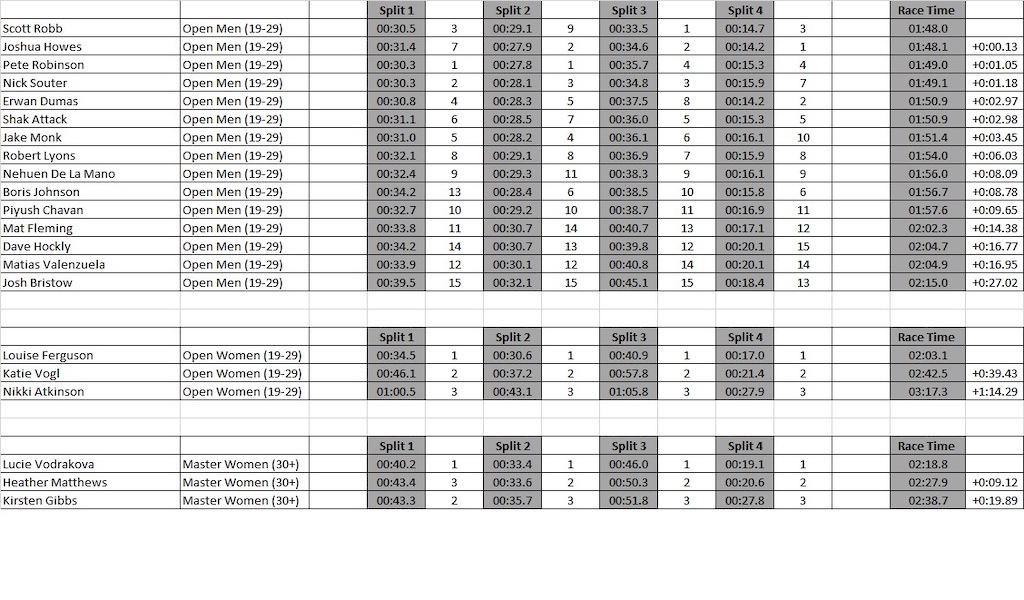 gosh how i miss them world cups

RUSTYBOI77 (Apr 6, 2021 at 1:04)
legend says he never needs new tyres he just floats above the track , and his suspension was tuned by god , learn we must for huck wizard is wise

nhlevi (Apr 5, 2021 at 12:43)
Bloody great job to all the organisers, riders, helpers and spectators! IG stories were a treat to watch

lightningskull (8 hours ago)
The bike world needs more events like this. Grassroots at its finest.
Below threshold threads are hidden