The 4X ProTour finals were held in Malmedy, Belgium on Saturday night, and as ever with 4X ProTour the racing did not disappoint.

The track located at the heart of Malmedy Bike Park is pretty amazing. Built in the centre of the forest, the track winds its way through huge berms, multi-lines, in between the FEST series jumps and into the finish arena. The longest track used on the 4X ProTour circuit, at 60 seconds this was going to be a wild race.

The riders arrived on Friday and practice was underway. Thankfully, Quentin Derbier was back from his big crash at 4X World Championships two weeks ago and he was ready to challenge for the overall title. The title battle was between Quentin and Scott Beaumont. The British rider has had an amazing year on the 4X ProTour and he was looking to grab the title in Belgium.

It was really interesting to see the top 4X riders in the world getting used to this track. The high speeds were really challenging the riders. This track had a few riders torn on what bike to use. Hardtails, enduro bikes and downhill bikes were all being used and each one had its pros and cons! By the end of Friday practice was over and it was great to see the riders challenged on a new track that most of them had not ridden before.

Saturday rolled around and the second practice session got under way at 11am. The rain was falling and the fog had arrived. The conditions were treacherous and the track was like an ice rink in places. You could tell that the riders were in qualifying mode as they were railing the turns and carrying speed. After the practice session it was time for qualifying. In 4X, riders get just one lap of the track for qualifying. It is a high pressure time for the riders as they have to get everything just right. First up it was the women. Natasha Bradley from the UK looked great all day and she got it perfect in her quali' run, taking the fastest time ahead of Lisa Schaub and Hannah Escott.

In men's qualifying it was Daniel Prijkel - on his return to 4X racing - who set the early pace. Rider after rider came down the hill but his time was looking great. Derbier through, had his sights set on the fastest time. With a faultless run in tricky conditions, he took over the hot seat. A great ride from Mitja Ergaver who went third fastest. The final rider was Scott Beaumont. Smooth as always, his run looked great but he did not go fastest, sliding into sixth across the finish. 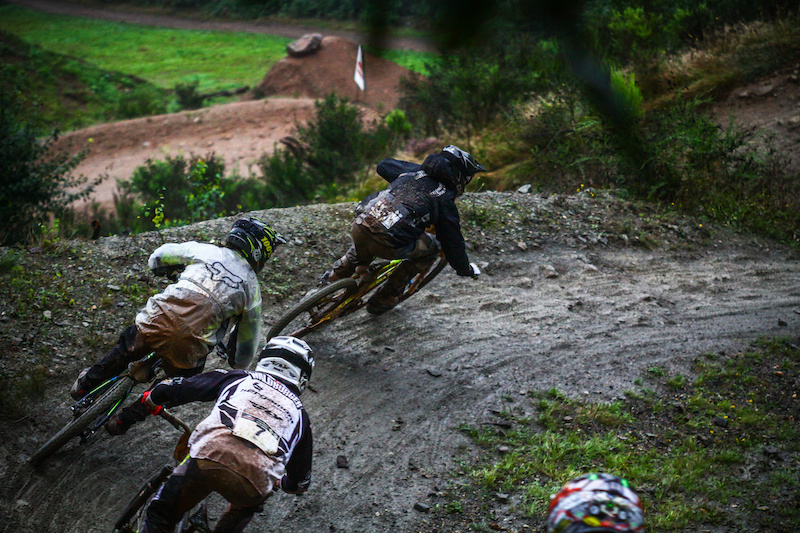 Saturday 5th September and it was time to crown the 2015 4X ProTour Champions. The forecast rain was here to stay and the track was getting pretty wild. 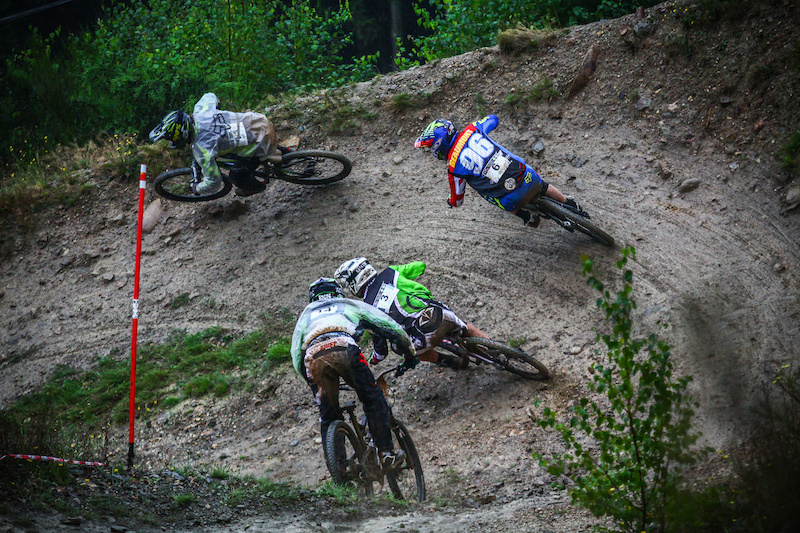 Bogdan Bondor one of the riders who made an early exit. Local rider Dimitri Lenaerts, who helped to build the track also went out in the second round. The biggest shock of the day though was Scott Beaumont. Boom Boom was knocked out in the quarter finals. His position for the race would end up being ninth. Title challenger Derbier would need fourth or better to seal the title. 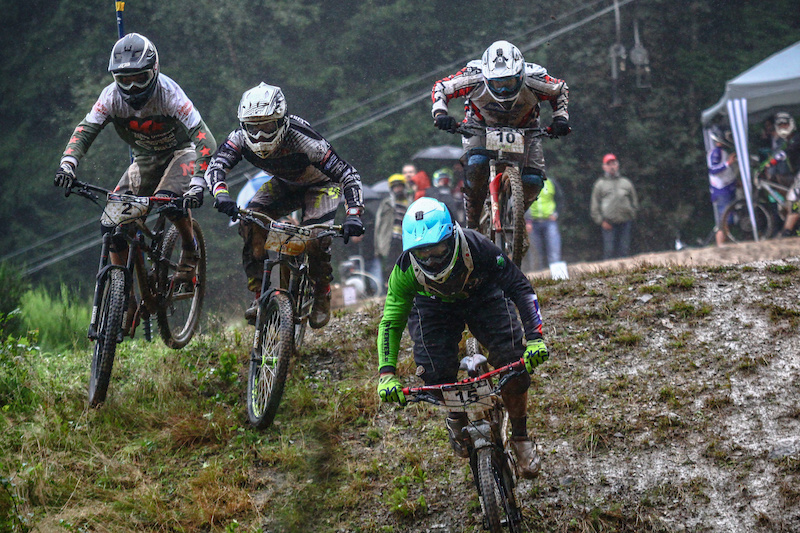 In Semi Final 1 it was Quentin Derbier on Gate 1, Luke Cryer in 2, Ingo Schegk in 3 and Benedikt Last in 4. The gate dropped and it was Last with the holeshot. Heading towards the lower section, Derbier was in second with Cryer in third challenging. Schegk then had a huge crash over the tabletop. The medics were straight to him and he was taken to hospital. Unfortunately, Ingo broke his femur in the crash. Everyone at 4X ProTour wishes Ingo a speedy recovery. The others held until the finish though and Last took the win from Derbier. This was enough for Derbier to take the 2015 4X ProTour overall title. After a challenging year, Derbier was clearly stoked to take the overall.

In Semi Final 2 it was Daniel Prijkel in Gate 1, Mitja Ergaver in 2, Simon Waldburger in 3 and Blake Nielson in 4. The gate dropped and Nielson took the lead. Waldburger dived inside on the first turn and those two drag raced down the second straight. Prijkel was hunting them down and he got close by the finish but couldn't make a pass stick. 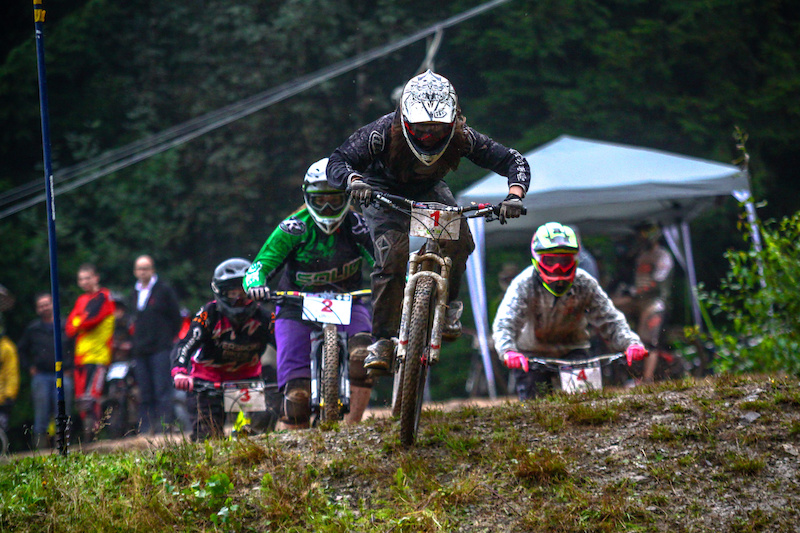 The Women's Final lined up in the gate. Natasha Bradley in Gate 1, Lisa Schaub in 2, Hannah Escott in 3 and Michaela Berakova in 4. The gate dropped and Bradley got the holeshot with Schaub close behind. Holding the inside lines Bradley kept her head and led from start to finish to take her second 4X ProTour victory in 2015. Schaub finished 2nd, Escott in 3rd and Berakova in 4th.

In the Men's Small Final, Daniel Prijkel took Gate 1, Mitja Ergaver in 2 and Luke Cryer in 3. Ingo Schegk unfortunately was heading for hospital. Prijkel got the holeshot with Ergaver in 2nd. The race looked to be pretty settled after Cryer crashed out in turn 2. Prijkel took the win and with it 5th for the day. 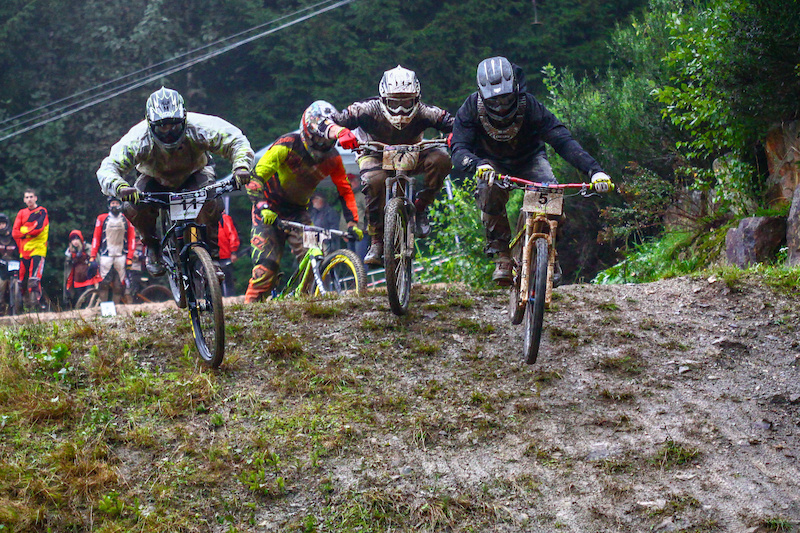 So it was time for the Main Final. Derbier in 1, Nielson in 2, Waldburger in 3 and Last in 4. The gate dropped and the riders were level. Into turn 1 Last took the lead. Through the esses, Derbier drew alongside Waldburger but the pass didn't stick. Nielson was quick to make the move and was into 2nd. Last rode a faultless lap and took his first ever 4X ProTour win ahead of Nielson, Waldburger and Derbier.

Fourth for Derbier was enough though as he took the overall by 13 points from Beaumont. 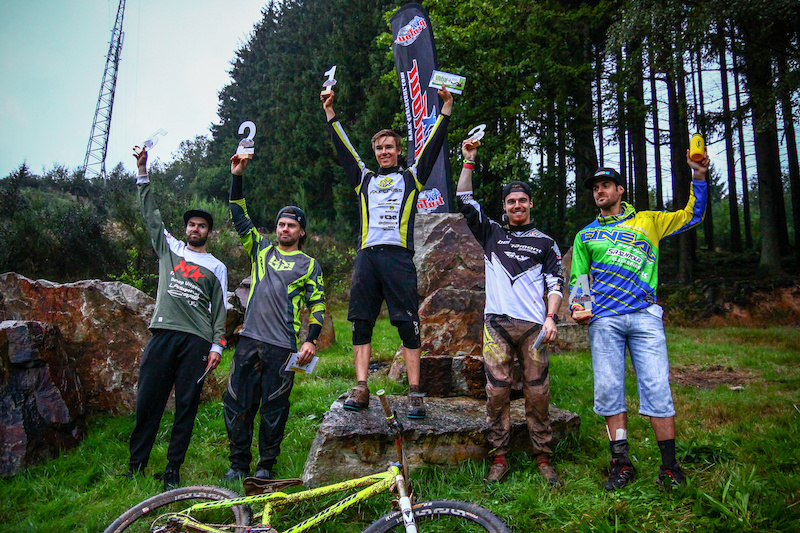 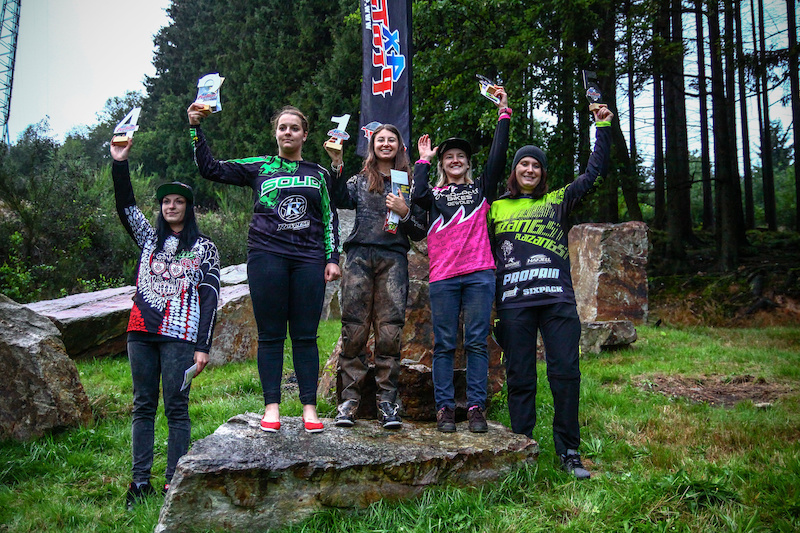 The award ceremonies took place for the race and the season was over for 2015. 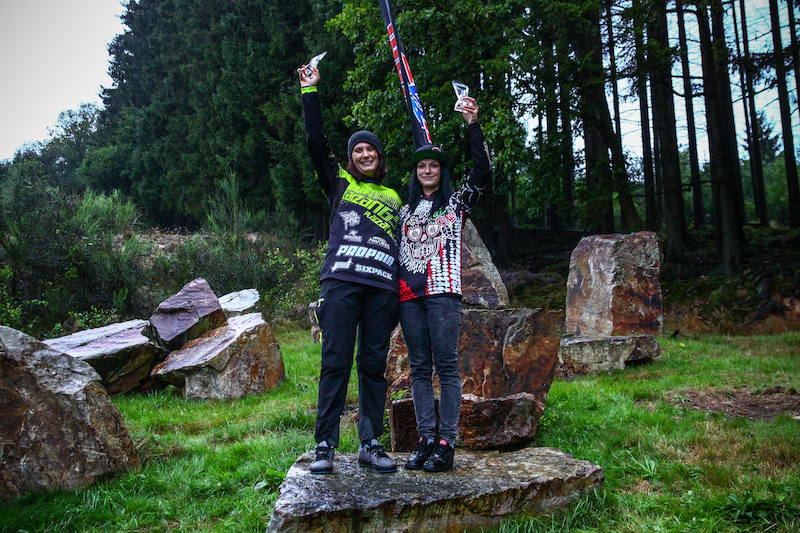 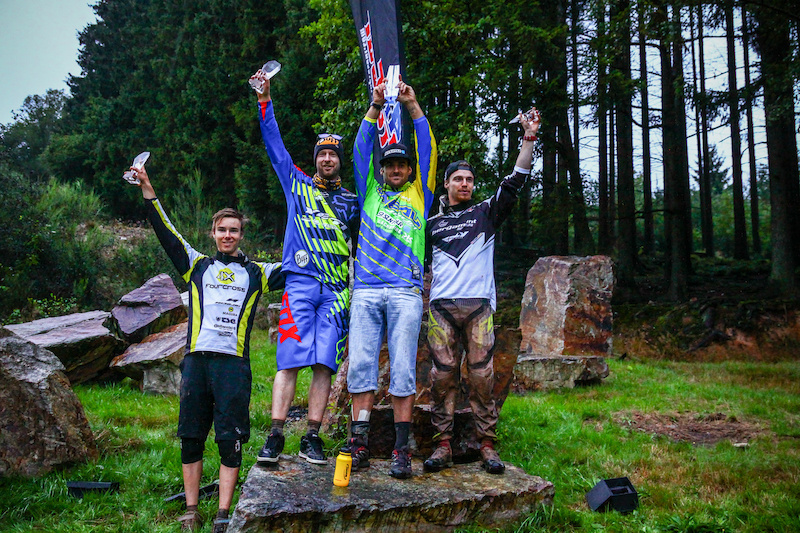 So that was it for the 4X ProTour 2015. A huge thank you goes out to all the riders who continue to support the 4X ProTour, the venues and organisers: Winterberg - Germany, Fort William - Scotland, Szczawno - Poland, Jablonec - Czech Republic and of course Malmedy, Belgium.

The dates and venues for the 2016 4X ProTour will be announced in the next few weeks so keep your eyes out to see where we will be racing in 2016.

Finally, thanks to the 4X fans around the world for reading our race reports and watching our films. It is the support of you guys that makes the 4X ProTour such a great race series.