The track in Szczawno Zdroj is in south west Poland is widely regarded as one of the finest 4X tracks in the world. In the heart of the city, it is the pride of the town, lined by hedgerows and trees. At around 40 seconds long, there is a mix of high and low speed, technical and huge jumps. There is something to suit all the riders and the racing is always amazing. Riders began to arrive in Szczawno on Thursday. The immaculately prepared track looked perfect. The 40 foot double jump on the last straight had riders talking as it was a pretty daunting feature at the end of the track, but as everyone started riding, they were all soon flying over it.

On Saturday, the skies were blue and temperatures were in the high 30's! With the race promoted in local shopping malls, hotels and shops, there was no surprise that thousands of spectators turned up to watch qualifying and the race itself. With food and beer stands at the track, the atmosphere was amazing and the riders were ready to get round 3 of the 2015 4X ProTour started. Thunderstorms were forecast but qualifying got under way with blue skies and perfect conditions.

The home crowd were going wild for all the local Polish riders. One by one the riders gave it their best shot to claim the fastest time in qualifying. Still, we feel, one of the allures to 4X crowds around the world is that 4X demands a single perfect lap just to qualify. A mistake and quite simply riders will go home and do not even race in the main event. It's a ruthless system but one 4X riders and fans love. The pressure on each rider is immense, but who could keep their cool and take the fastest times. 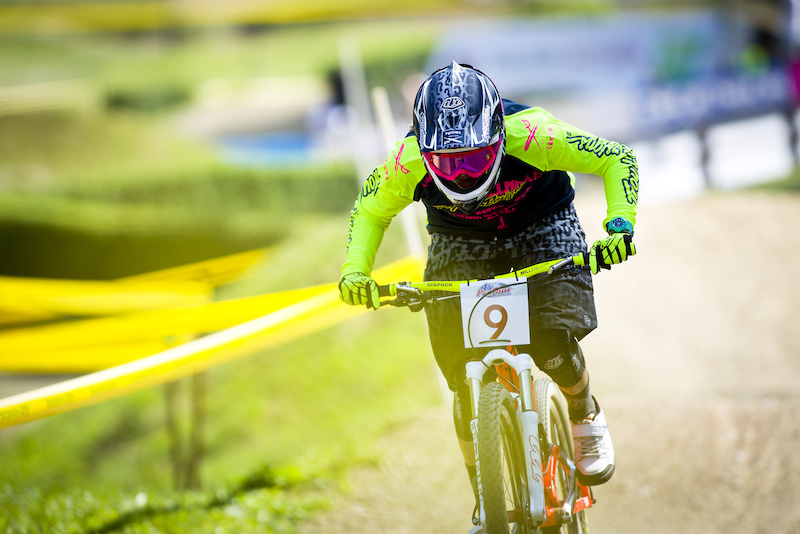 In the women's it was Helene Fruhwirth who took the fastest time. With an awesome lap, she stopped the clock in 53.35 seconds. Second went to local girl Natalia Piwowarczyk sending the home crowd wild with a great qualifying run. Third was Michaela Berakova. 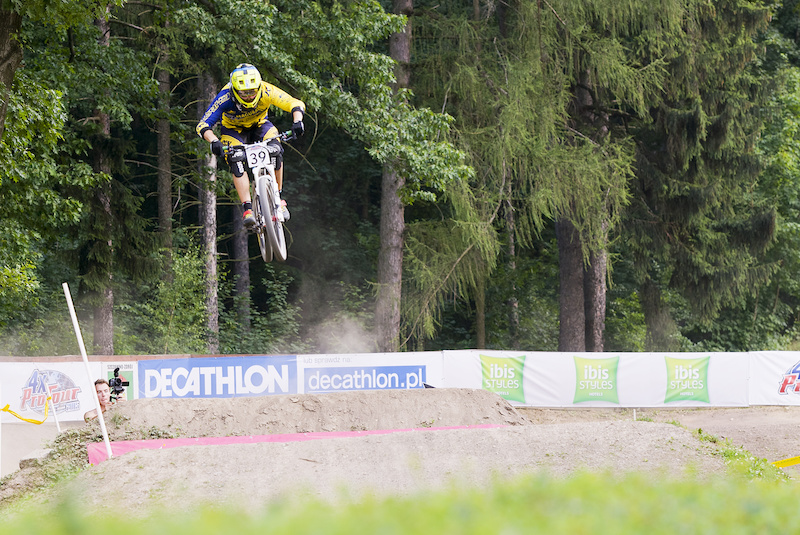 In the men's, Hannes Slavik from Austria took the fastest time with 42.42 ahead of overall points leader Scott Beaumont on 42.50 and Quentin Derbier in third with 42.56 Just 0.6 Separated the top 5!

The guys were absolutely on the ragged edge. They make it look so easy but the speed that they hit this track and these jumps at has to be seen to be believed.

So it was onto the knock-out stages. The racing was superb all night. So much calculated racing from all the guys it was great to watch. It was great to see Felix Beckeman back racing on the 4X ProTour after a horrific crash earlier in the year left him with a severe foot injury. Unfortunately, it was a terrible comeback for Felix, crashing on the last jump and breaking his collarbone in the quarter final. All the best for a speedy recovery Felix. Also healing vibes to British rider, Paul Bakewell after a nasty crash on the last double, and Czech rider Jiri Penc who crashed and has reportedly broken both arms. All the best for a speedy recoveries from everyone at the 4X ProTour.

Hannes Slavik, Scott Beaumont and Quentin Derbier went unbeaten to the semi finals. In the first semi, Hannes Slavik lined up against Blake Nielson, Denis Drozd and Benedikt Last. As the gate dropped Slavik powered into the lead. Nielson, Last and Drozd were locked in a battle for second all the way to the last straight. Nielson made a small mistake out of the last turn, Last also lost some speed and it was Drozd who kept his cool and booked his first ever 4X ProTour final. In the second semi final, Scott Beaumont took gate 1, Derbier in 2, Simon Waldburger in 3 with Britain's Alex Metcalfe in 4. The gate dropped immediately Derbier was out of it. A snapped chain and it was over for the French rider. Beaumont took the lead and pulled away from Waldburger and Metcalfe. These two battled all he way to the finish, trading places all the way down the track but in the end, Beaumont and Waldburger were in the final.

In the women's main final, Natalia Piwowarczyk was in gate 1, Helene Fruhwirth in 2, Michaela Berakova in 3 and German rider, Eva Katharina Brauer in 4. The gate dropped and Fruhwirth got the holeshot. She did not look back riding some great lines and hitting most of the huge jumps. Piwowarczyk had a great ride to finish second, with Michaela Berakova in third. Eva Brauer finished fourth, and winner of the small final was Patrycja Kata. So it was onto the men's finals. Benedikt Last took the win in the small final and this gave him the last step of the podium in fifth. The small final was action packed with Derbier leading for most of the race, then Nielson and Metcalfe but at the finish it was Last taking the win. . 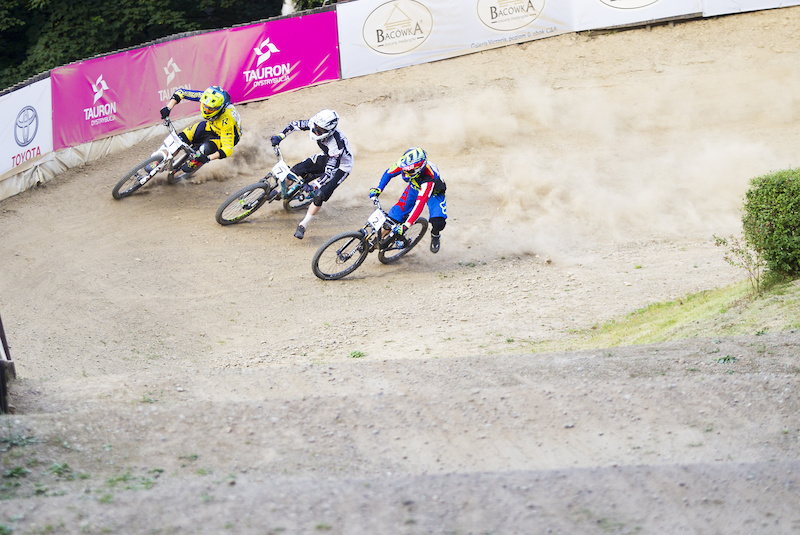 The final race was the big one. Hannes Slavik took gate 1, Scott Beaumont in 2, Simon Waldburger in 3 and Denis Drozd in 4. The gate dropped and Slavik, Beaumont and Waldburger were level. Into turn 1, Beaumont braked and dived inside. Waldburger did too. All three riders got really close in turn 1 but Slavik carried good speed on the exit and was away. Beaumont got going from turn 1 quickly and moved into second. From here the positions held as the riders had just spread out too much from the first turn. Something that is so rare in modern day 4X, but the first turn was certainly wild! Great ride from Drozd to make his first ever 4X ProTour final. A name to watch out for at future races.

The podiums, national anthems and ceremonies capped off a great event, and went into the 4X history books for this amazing venue. Ironically the thunderstorms that were forecast all week arrived just as the men walked off the podium! Perfect timing and everyone left the venue for the after party in the local night club. An awesome event and a real showcase for the 2015 4X ProTour. 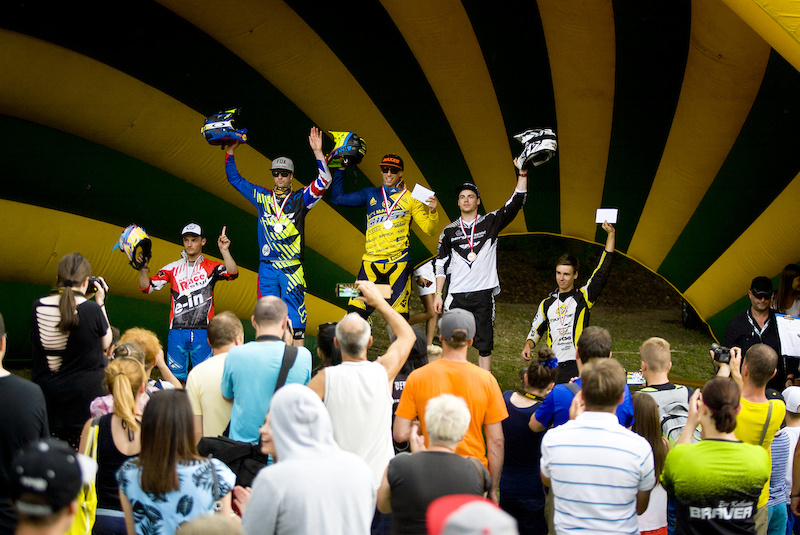 
From here the riders only have seven days until Round 4 of the 2015 4X ProTour which will take place in Jablonec in the Czech Republic on Saturday 25th July. The venue in Jablonec at JBC Bikepark is phenomenal. Without doubt the biggest, most technical track we race in the whole 4X ProTour. It will also mark the return to racing for Tomas Slavik on his home track. We can't wait to see how he gets on.

it becomes hard to distinguish between sarcasm and seriousness, esp on the internet.

also sarcasm is a skill, and i see a total lack of skill in your first comment

el-nombre (Jul 22, 2015 at 12:44)
I'm very confused. I definitely did not write the post above directed at Boardlife. I did write a response to brooce about 4x vs BMX in the eyes of the IOC but that seems to have disappeared and been replaced by a completely different post written by someone else in response to an entirely different comment from an entirely different article www.pinkbike.com/u/mikekazimer/blog/now-that-was-a-bike-ned-overends-1992-specialized-m2.html. What's going on?

tadgercat (Jul 20, 2015 at 21:23)
Best damn two wheel racin on the planet. Here in the USA 4x or Dual Slalom are unbelievably effectively extinct... they whined, courses to hard to build for 1 event a year, not enough participants to justify the expense of the building the courses at nationals... and so it just died.

kjl845 (Jul 21, 2015 at 4:28)
Dual Slalom is coming back slowly. There is a series in Michigan and three races in Maryland this summer. I think 4x started dying when Sea Otter dropped it. The cost of building courses and possibly no industry support finished it off.

northwoods1 (Jul 20, 2015 at 9:29)
So, quick question - could a rider just show up to a 4x ProTour race, pay their entryfee, and attempt to qualify? Is there some particular license that a racer has to have to register?

The4XProTour (Jul 20, 2015 at 11:28)
You just need your local countries race licence to race. There is a Russian girl who watched in Poland is going to race at JBC in Czech this Saturday!