Join Pinkbike  Login
With the expo now set up and in full swing here in Whistler, we took a spin around the booths to see what new tech was on offer. 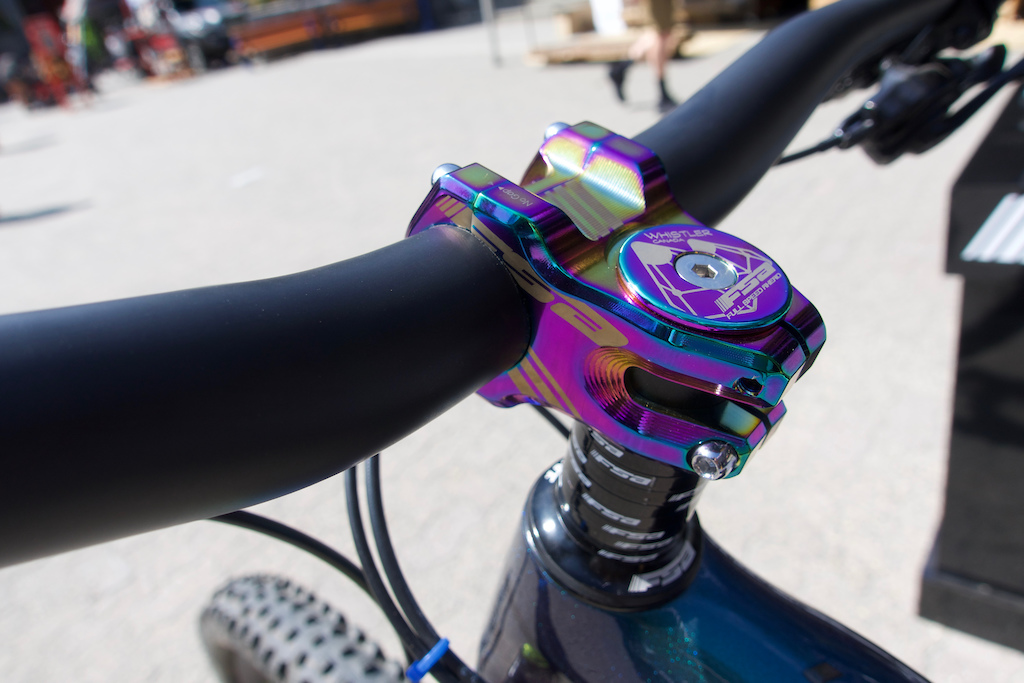 FSA's athletes will be running this special edition stem this weekend. It's the brand's first zero rise stem with a 35mm clamp and is available in 32mm or 40mm lengths. The stem is CNC'd in house by FSA. Currently, there aren't any plans to bring it to market unless the demand is high enough but who knows. Also pictured are some oil-slick top caps that FSA are giving away this weekend. Get down to their booth if you like the look of them and snag one for yourself. 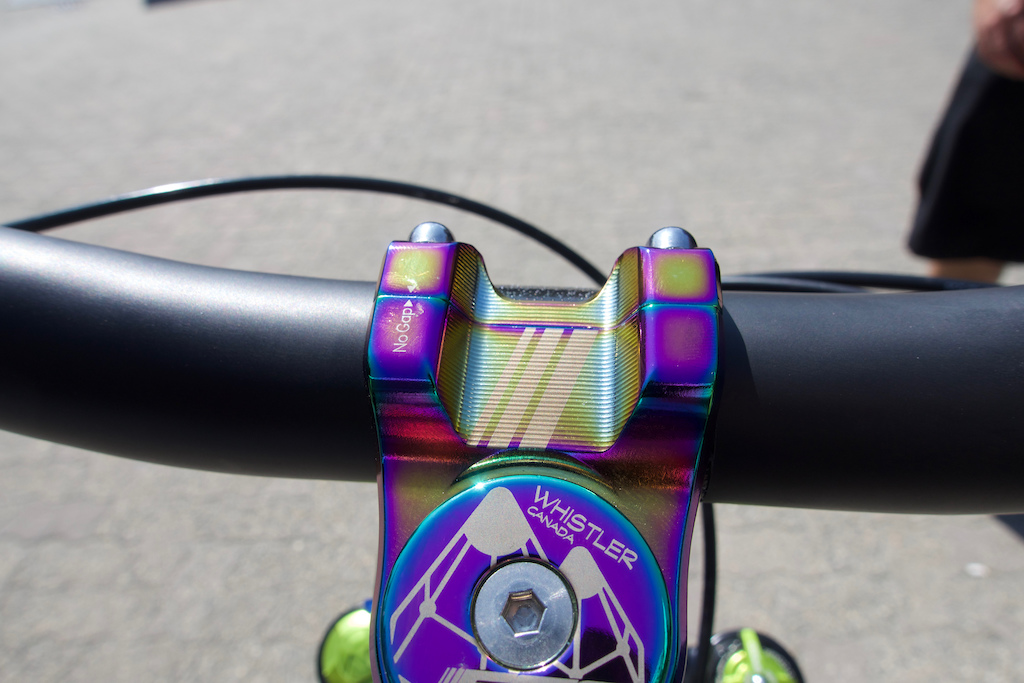 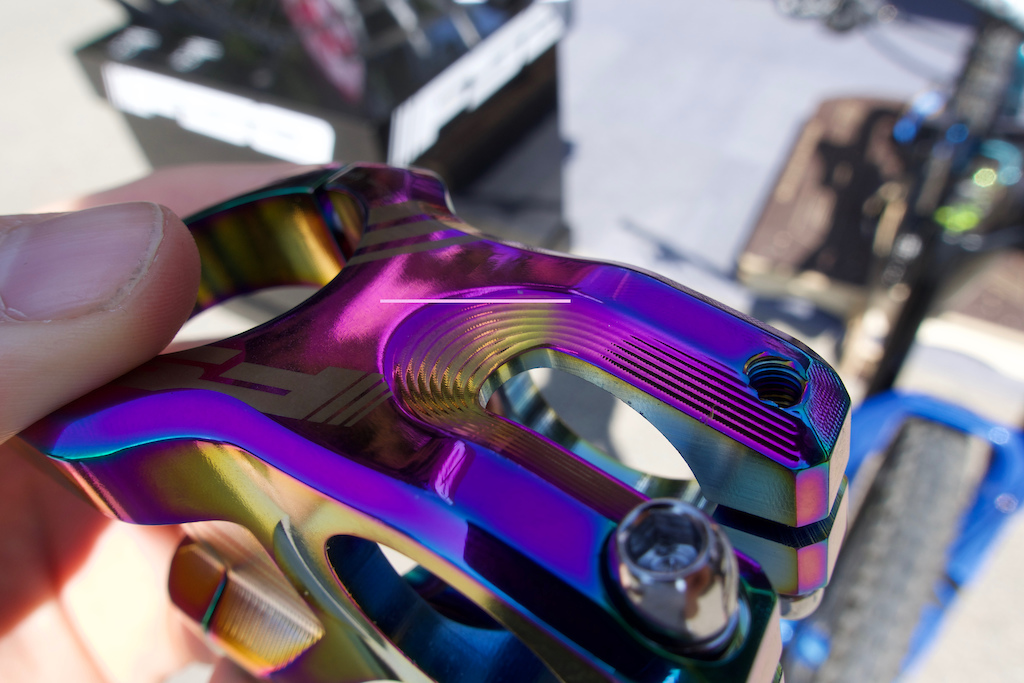 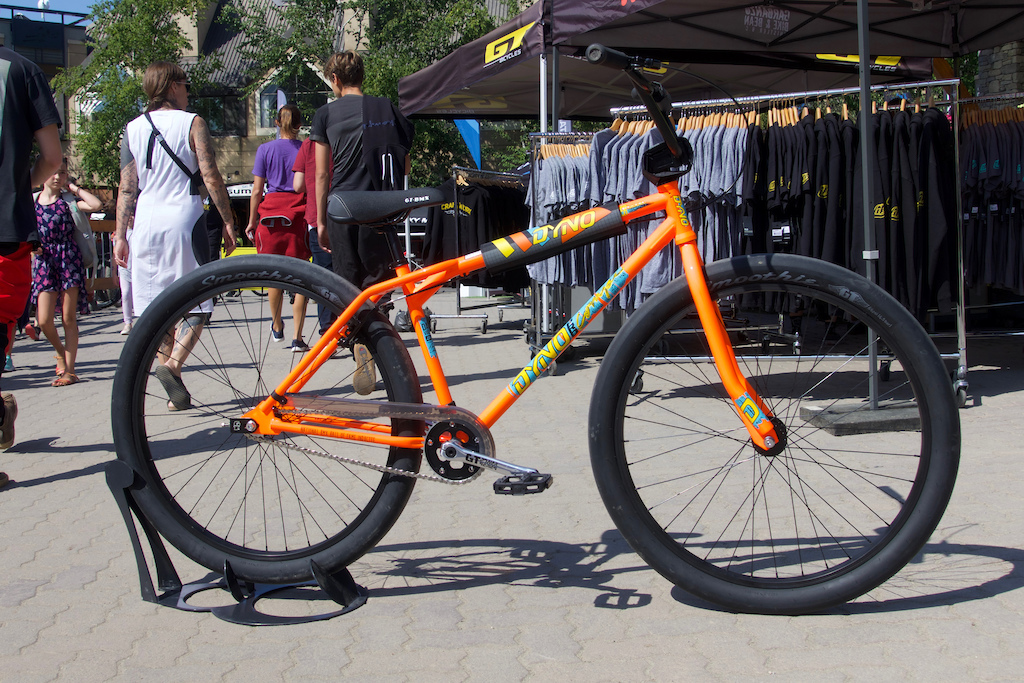 Described as 30 years in the making, GT has revived its 80's classic Dyno BMX as a 29er play bike. Designed with help from BMX Hall of Famer Dave Voelker, this '87 day glo orange edition pays homage to the year Dave turned pro with the brand. The chromoly frame has been supersized to fit 29" wheels and is much stiffer than the 80s edition but the 2.5" Smoothie tyres should offer plenty of cushion in comparison.

Besides the mtb wheels, there's a lot of BMX componentry here too including some revised Pretzel bars, a mid-bottom bracket, inverted seatstay brakes, and 3-piece cranks. The bike has so far proved popular with nostalgic fans and also riders in the new Bike Life movement. Reportedly, GT have already sold out of the bike. 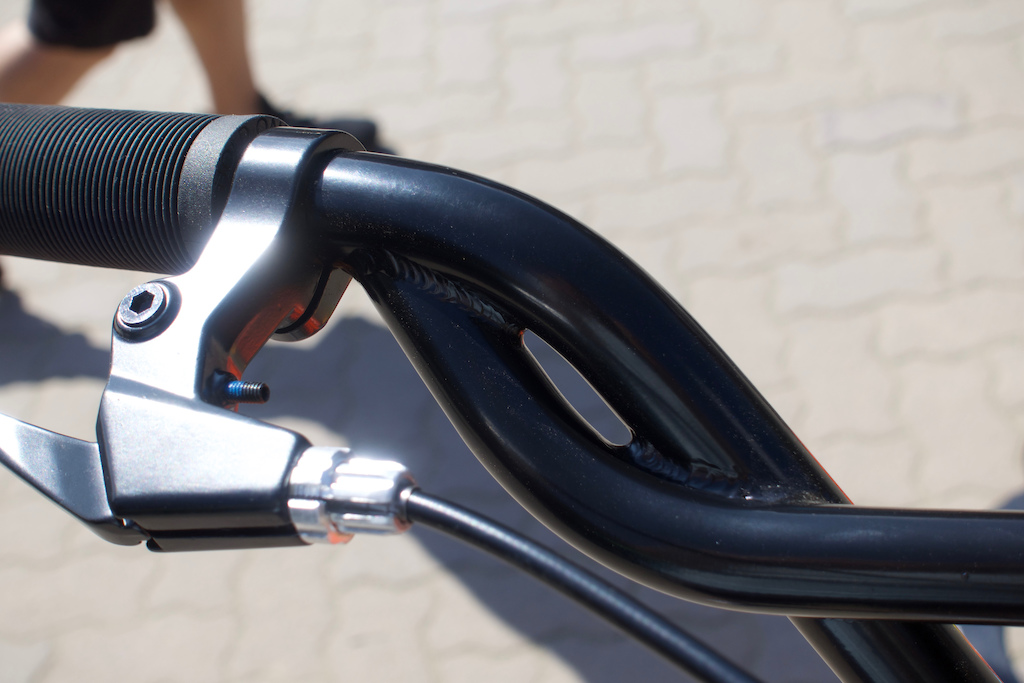 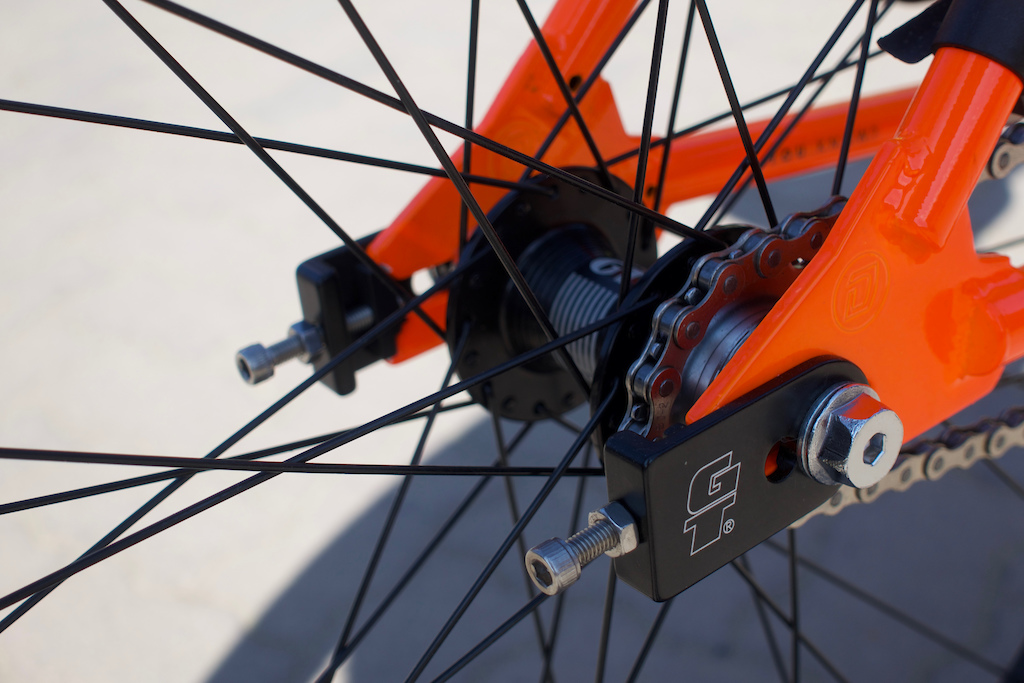 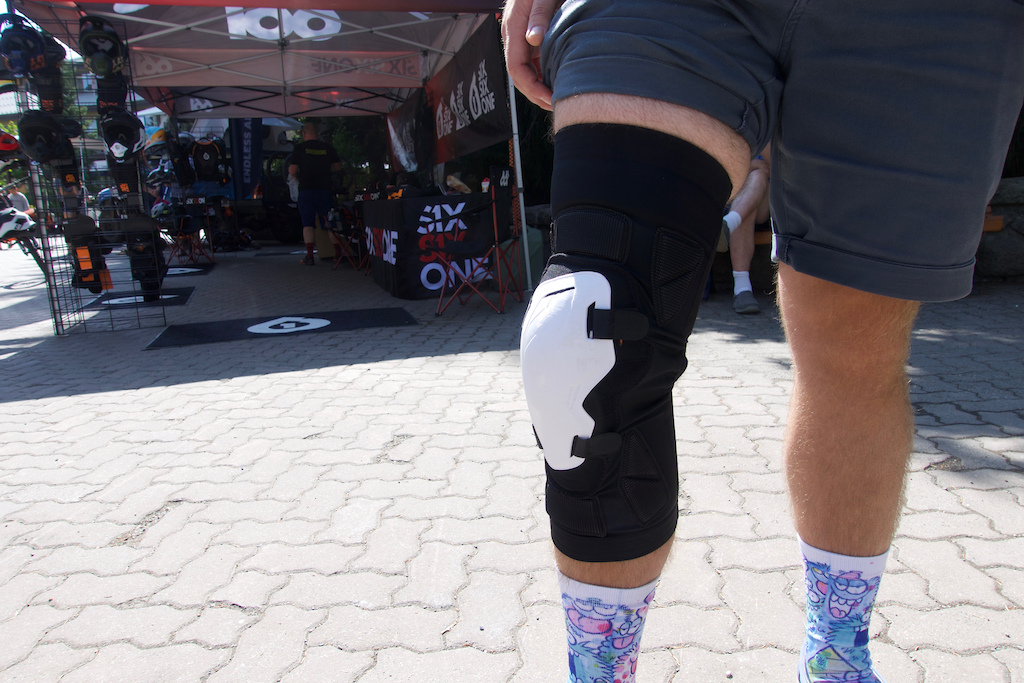 SixSixOne showed us this new kneepad that they're hoping to release before summer next year. The large kneepad covers from the middle of the shin up to the middle of the thigh, offering some all-important thigh gap protection. The knee has a D30 protector with the option of adding a plastic skid cover on top. The plastic was white for this prototype but will be a matching color on the finished article. The pads surrounding the knee will also be bigger on the final product. 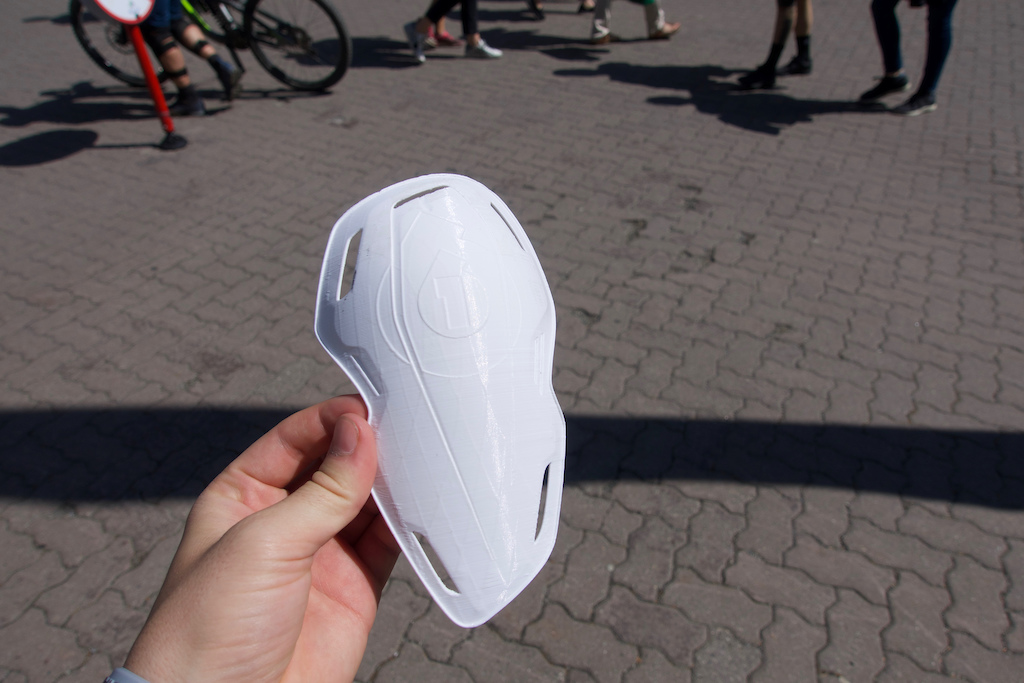 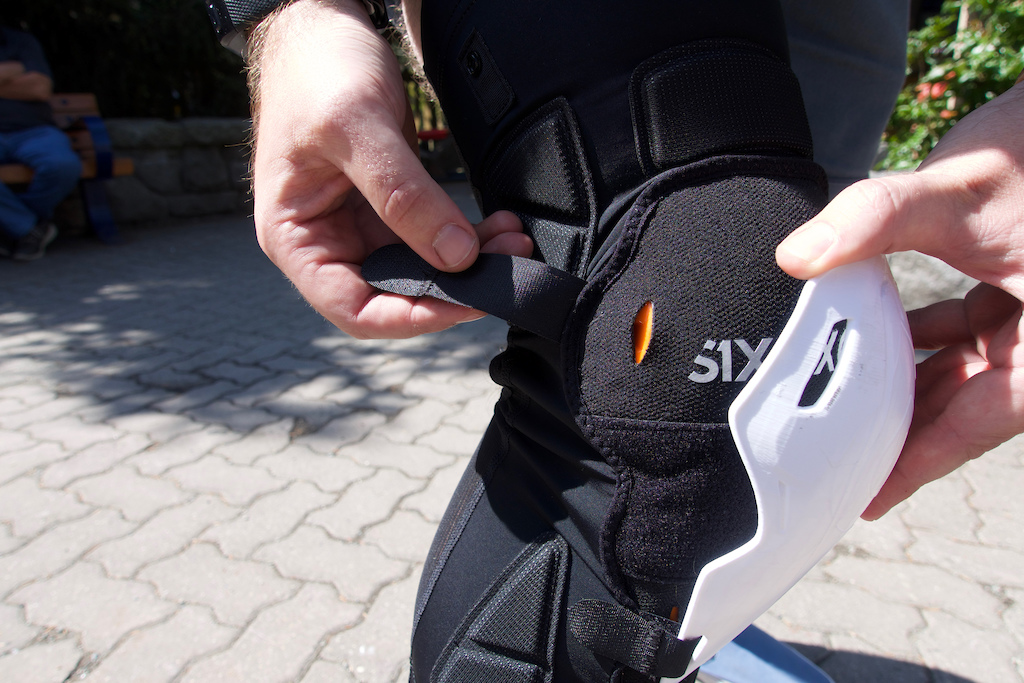 SixSixOne expect the kneepad to sell for around $100 USD with the plastic cover being a $10-15 USD extra on top of that. 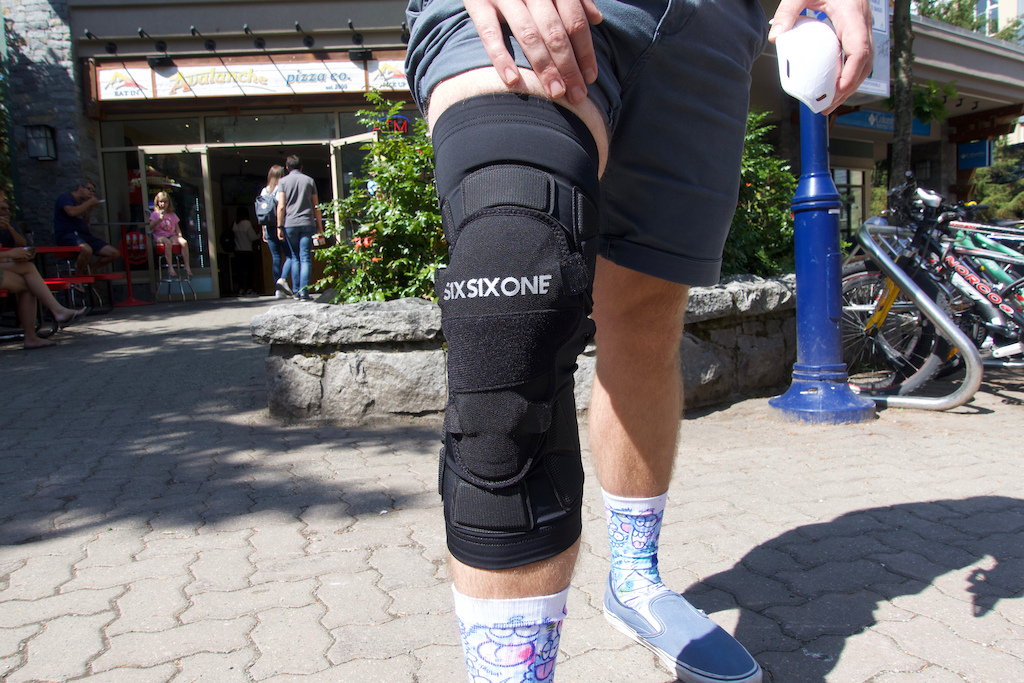 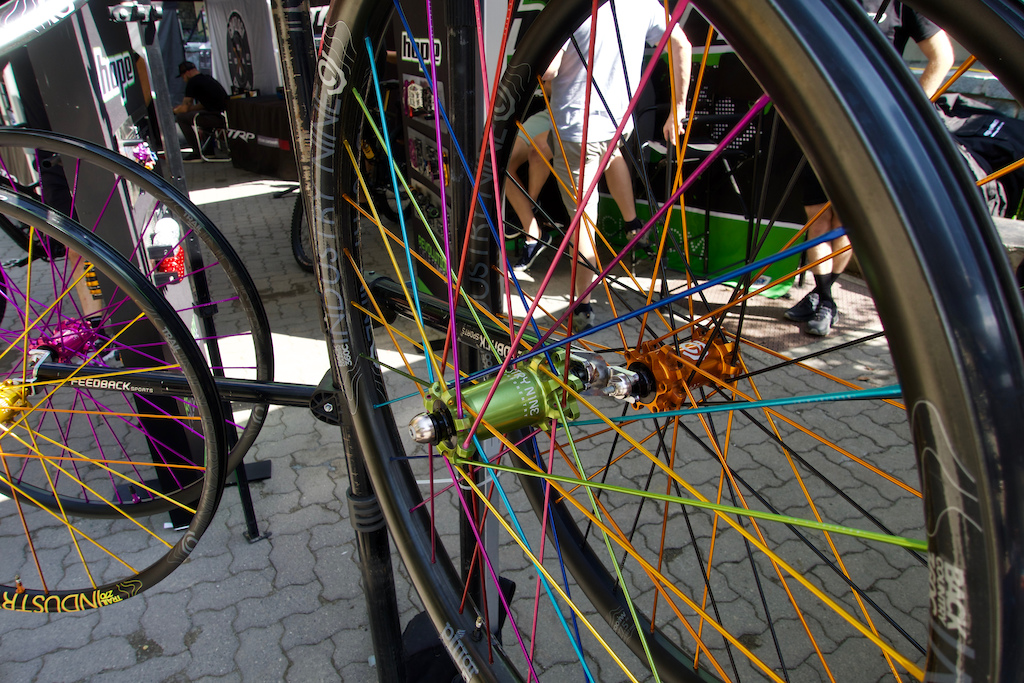 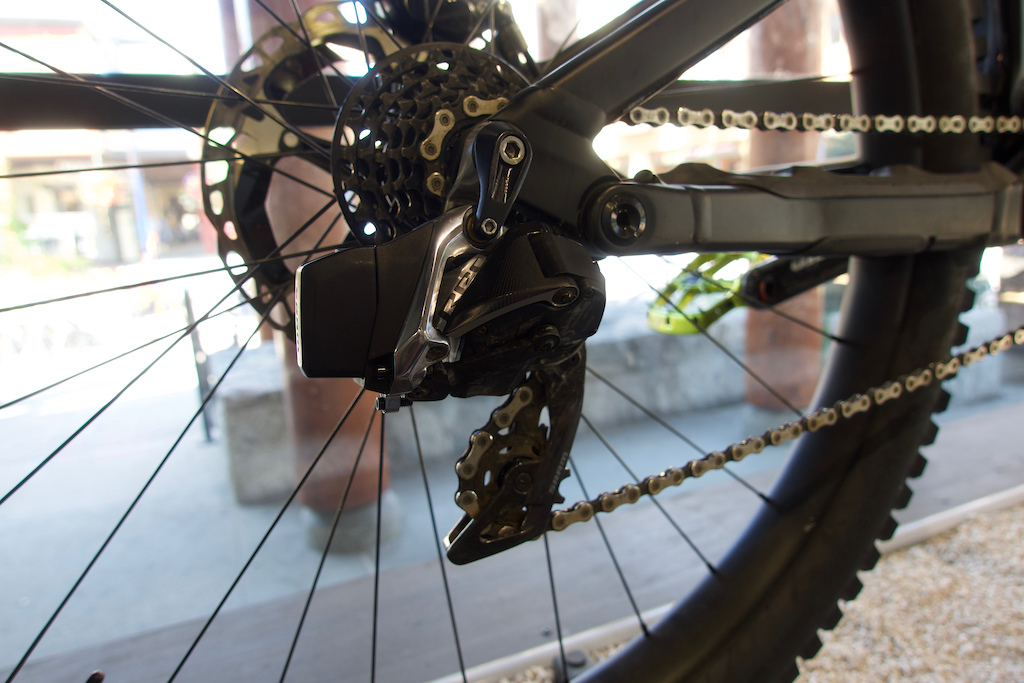 We may have seen a prototype of SRAM's 7-speed drivetrain yesterday but Fanatyk bike shop in the village already have a wireless downhill bike up and running. They have converted a SRAM Red eTap road drivetrain to work on a Specialized Demo with a 7-speed cassette. The bike uses a Blipbox transponder mounted under the handlebars with a Blip button next to each grip - one for upshifts and one for downshifts. 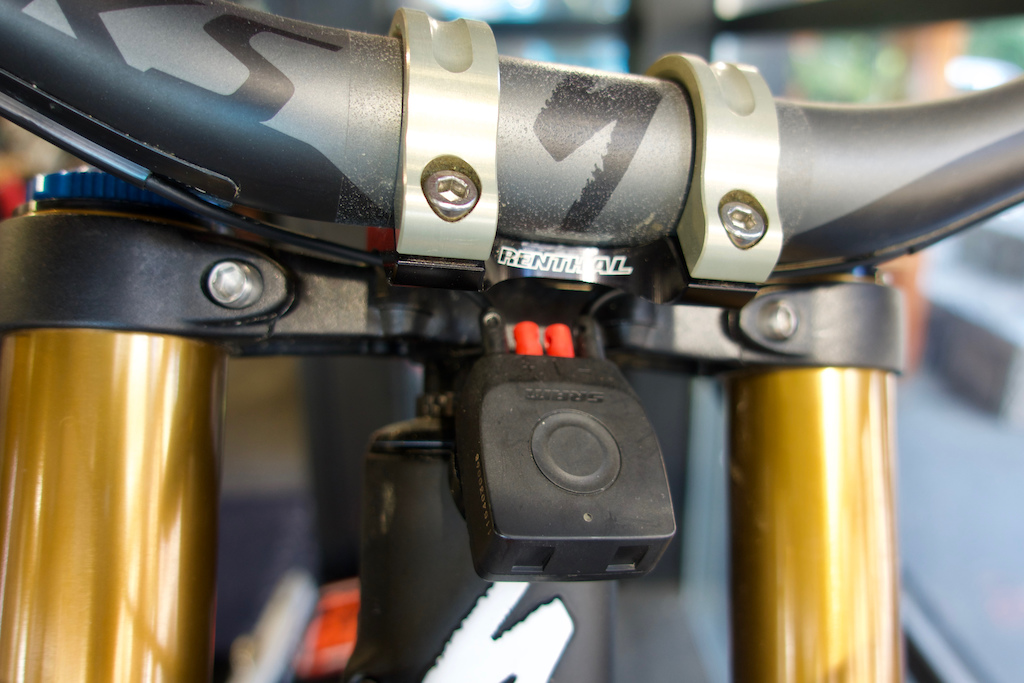 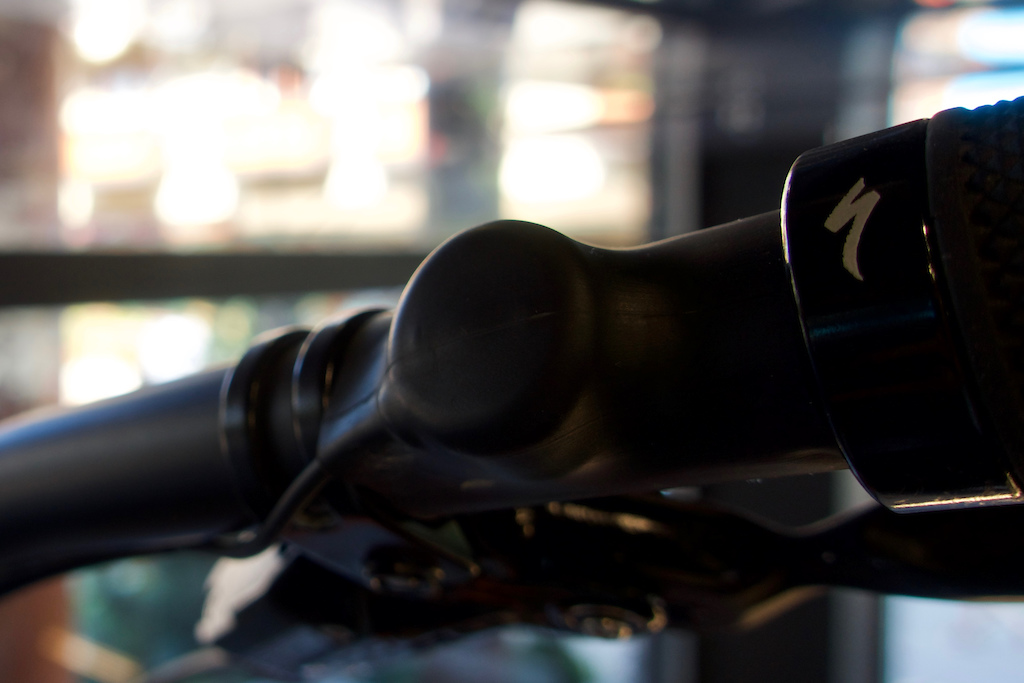 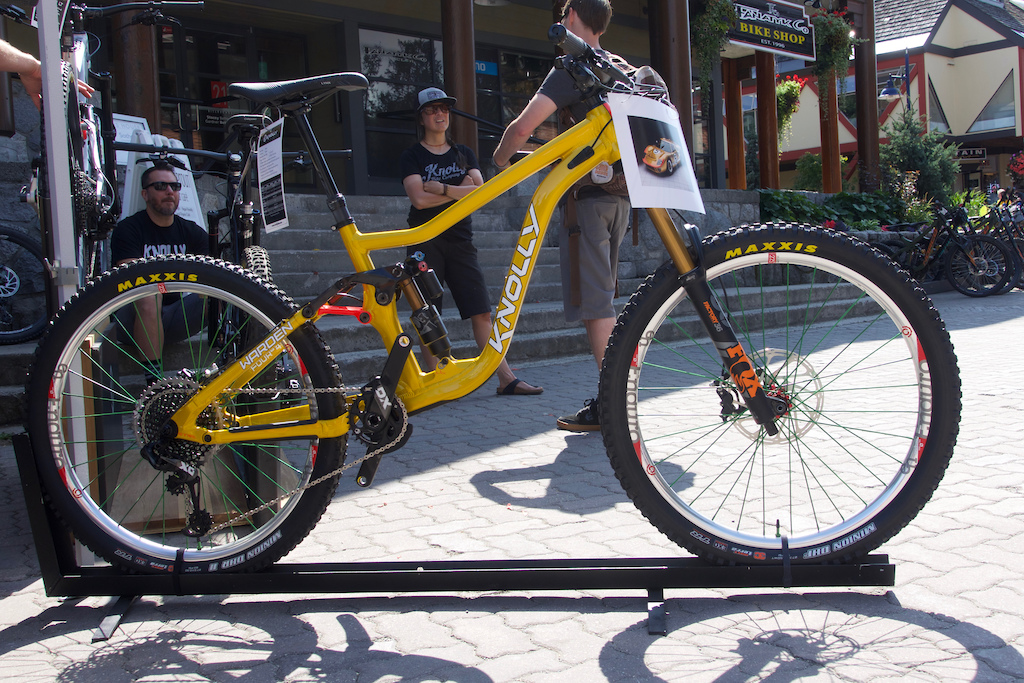 Knolly released the new Delirium, Warden, and Warden LT just before Crankworx and had the whole fleet on display in the expo area. The bike that caught out eye was the Warden that was painted gold and orange in tribute to the 1966 Le Mans Ford GT40 driven to 3rd place in a Ferrari-crushing 1-2-3 by Ronnie Bucknum and Dick Hutcherson. The car remains iconic to this day and was sold at Sotheby's for $9,795,000 USD last year. More info on the new Knolly bikes and this color can be found here. 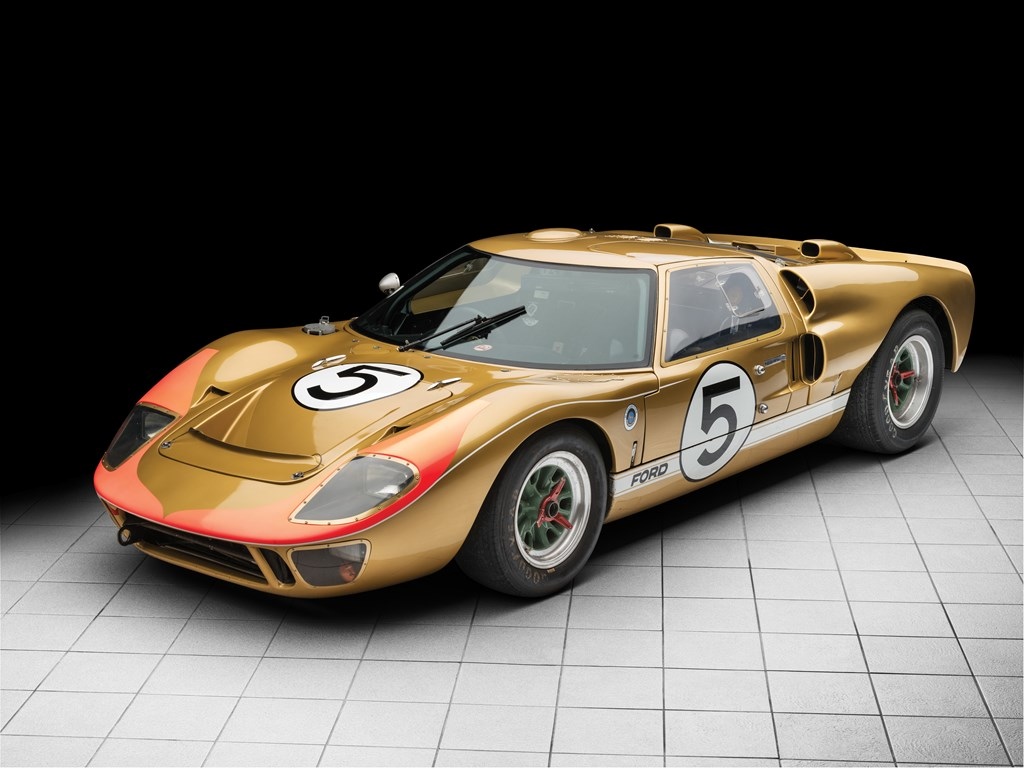 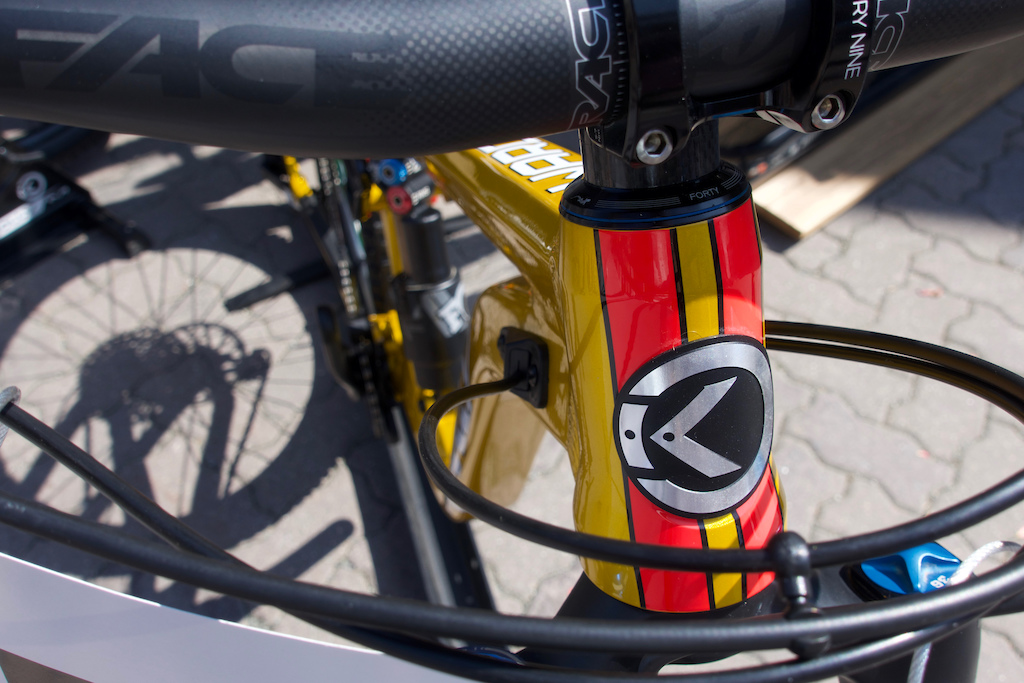 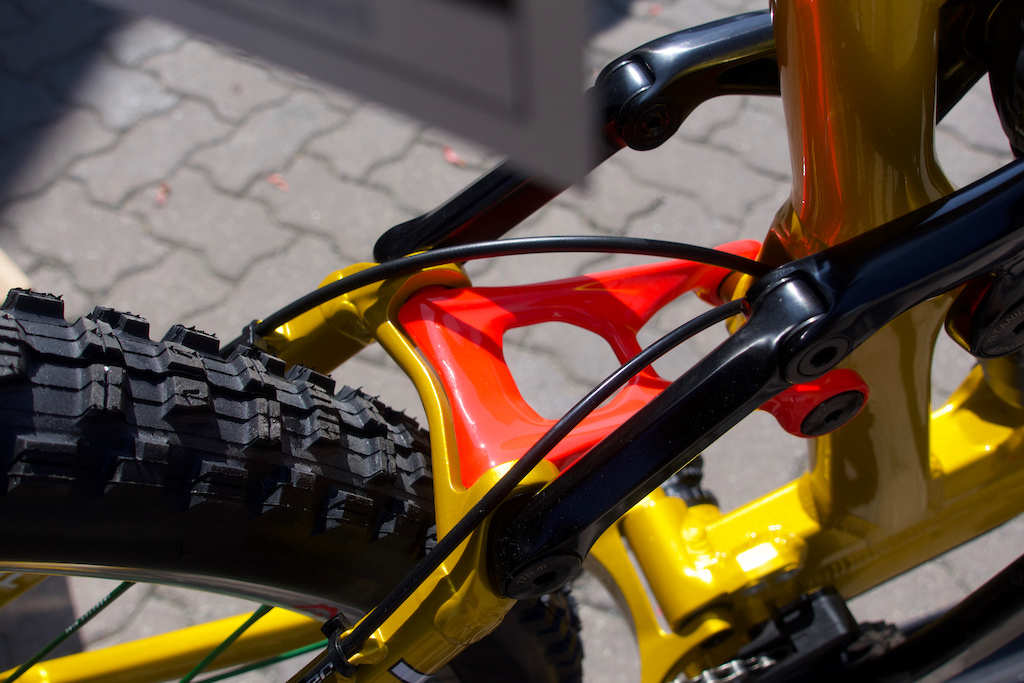 ninjatarian (Aug 15, 2019 at 11:48)
Production Privee is famous for their sports car inspired colourways. Neat to see someone else use it as inspiration.

incubus (Aug 15, 2019 at 11:22)
I love the idea of using Motorsports liveries on bikes. In addition so knolly, production privee do this as well. Bravo knolly!

gotohe11carolina (Aug 15, 2019 at 11:43)
@Powderface: Only on sundays. The rest of the week they have to turn right or else we couldn't outrun the revenuers

blowmyfuse (Aug 16, 2019 at 5:43)
@shredright: except that one Yeti someone did a few years back with the powder blue & orange color scheme to mimic an old racer. Ferrari maybe?

alexsin (Aug 15, 2019 at 11:59)
Here’s a brainwave: design riding shorts to be long enough when riding, not standing around. We don’t need more neoprene. We need longer shorts.

mmoon (Aug 15, 2019 at 13:39)
@alexsin I got a pair of Bontrager's more gravity oriented shorts in 2012. They fall just below the knee when I'm standing, and cover the top of the pad while riding. Since I recently got a really chill job where I can ride at lunch and wear my cycling gear around the office, I wear them pretty much every day, 7 years after I first got them.
I haven't really looked at riding shorts in a long time, did they get short? I remember them all looking like 3/4 pants.

Upduro (Aug 15, 2019 at 13:44)
Ion has a model that is longer than the standard one. Intended for people with longer legs, but works just fine for a buddy of mine who wants to cover more of his upper leg while pedaling.

Ron-C (Aug 15, 2019 at 16:17)
@mmoon: I think mountain bike racing kits got a lot more fitted and less flappy over the years. That means that the shorts sit higher on the body now. That's also true for all the less gravity oriented brands or models with shorter inseams(stuff you used to find at Performance).

Ttimer (Aug 16, 2019 at 7:05)
Good luck selling that to the TLD fashion parade whos biggest worry in life is how their color matching looks in the lift-line.

KNOLLYBIKES (Aug 19, 2019 at 12:24)
@sngltrkmnd: Yes you can. It is the black one www.knollybikes.com/wardenltv2. You can also get second place if you buy the blue Fugitive.

mdpetrie (Aug 15, 2019 at 11:39)
I've had multiple bad experiences with the durability of SixSixOne pads and with a warranty department that never responded to emails. I can't imagine buying their pads again.

sixsixone (Aug 27, 2019 at 6:04)
Hey mdpetrie, That sucks and I am sorry to read that. If you can drop me an email direct i'd love to see if I can help out - gareth.critcher@sixsixone.com

Zany2410 (Aug 16, 2019 at 9:52)
I absolutly love knolly but they copied that old racecar design thing of production privee i guess
still looks awesome

blowmyfuse (Aug 16, 2019 at 9:31)
@BCtrailrider: plus you live where you guys have such wide trails for the most part. Here, most everything here is narrow and twisty and overgrown. I've ridden multiple 29er demos now (cause who passes up a free $7k demo?) and the arc of the wheels is wider, you have to turn sooner and/or when you do reach (especially if your reaction times are off or getting older like myself), they put you behind and lagging and missing stuff. 90% of riding is getting to pop off stuff or wiggle, squirm, slash and dash. With the 29ers, just felt like I was turning all my normally mellow (but entertaining if you goof around, doink & pop stuff) into pavement and took some of the enjoyment out of it.

Sure, you can roll over the bumps and stumps more easily, but that's not what most of a ride is. I'm good. We've got a lot of options right now.

I'd say the thing that sucks is that my 5'1" wife , 2 daughters are still getting shlt on by this industry.
I should be able to go out right now and snag a 26" wheeled hardtail with a 1 x 10 drivetrain and hydraulic brakes (that they can REACH) new with good grip tires for less than $500. But the industry is so bent on FOKKING us that you have to spend $800 on LESS CHAINRINGS and 1 LESS SHIFTER than a $700 bike with 2 shifters, 3 front chainrings & 7 or 8 rear gears?