Ride Your Bike in the Virtual World of Bike Unchained 2

• Out Now! The ultimate MTB mobile gaming experience for iOS and Android devices
• Compete against riders around the world
• Prove your speed, style and skill in Downhill & Slopestyle contests
• Completely redesigned with one-hand gameplay and photo-realistic 3D graphics
• Build your dream bike and customize components to your needs
• In-game mentors like Aaron Gwin, Tahnée Seagrave, Fabio Wibmer or Thomas Genon 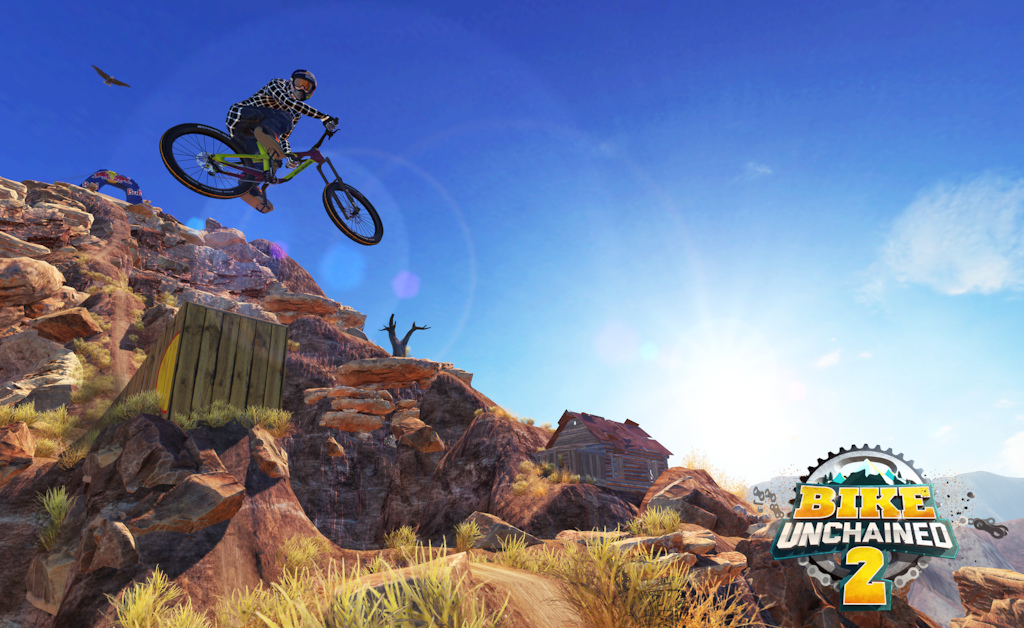 What if you could ride epic Downhill tracks, pull off the craziest Slopestyle tricks, be mentored by some of the brightest stars in the sport, show your friends – and the world - who´s the best in the world? Now, you can! And you don’t even need to be a pro-rider to compete; not yet at least. You don´t need to travel across the world or to wait for the season to start – or dread for it to finish. All of this is possible and you already have everything you need right in your hand. If you have an Android or iOS device, then get ready: It’s time to send it thanks to the ultimate mountain bike gaming experience, Bike Unchained 2!

Red Bull Media House brings you the latest iteration of its Bike Unchained franchise series. If you were one of the tens of millions who played the first version, then you’ve already had a glimpse of the next best thing to actually hitting real-world trails with your bike. However, Bike Unchained 2 is next level! The brand-new game is nothing like you´ve ever seen before: it´s gnarlier, crazier, more realistic – the best MTB gaming experience out there. 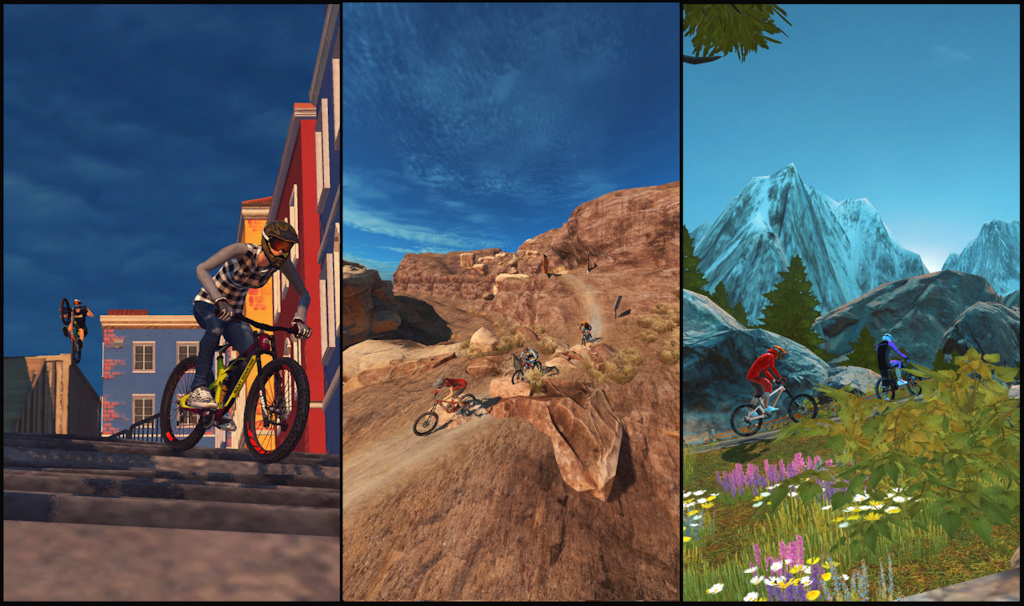 The sequel, which has been redesigned from the ground up, allows players to play in portrait orientation mode, putting the power to win in the palm of one hand. Another key step-up of this latest instalment are the stunning, realistically crisp 3D graphics, designed to recreate not only the surroundings, landscapes and look and feel of Downhill and Slopestyle courses, but also the body movements and flow of real-life riders.

“When we started working on Bike Unchained 2, we decided from the beginning we wanted to listen to what players that had played the first version had to say. We knew we had a good thing going with the first Bike Unchained, but players told us they wanted more realism. It made sense for us to design the sequel with a focus on delivering that realism through stunning visuals and a gameplay experience that allows beginners and veterans to feel the excitement of riding bikes,” stresses Pekka Kupiainen, the Producer of Bike Unchained 2.

“We also wanted to make sure that everyone who worked on the game knew that excitement first-hand. At Red Bull we have access to the greatest MTB riders in the world, so we teamed up with Matti Lehikoinen, Finnish Downhill legend, who was tireless in sharing his experience with our developers so that they could produce the most realistic game out there. It was great to get everyone on the same page say, ‘Yeah, that’s the adrenaline rush we’re going for’, and of course it was a bonding experience for the team as well.” 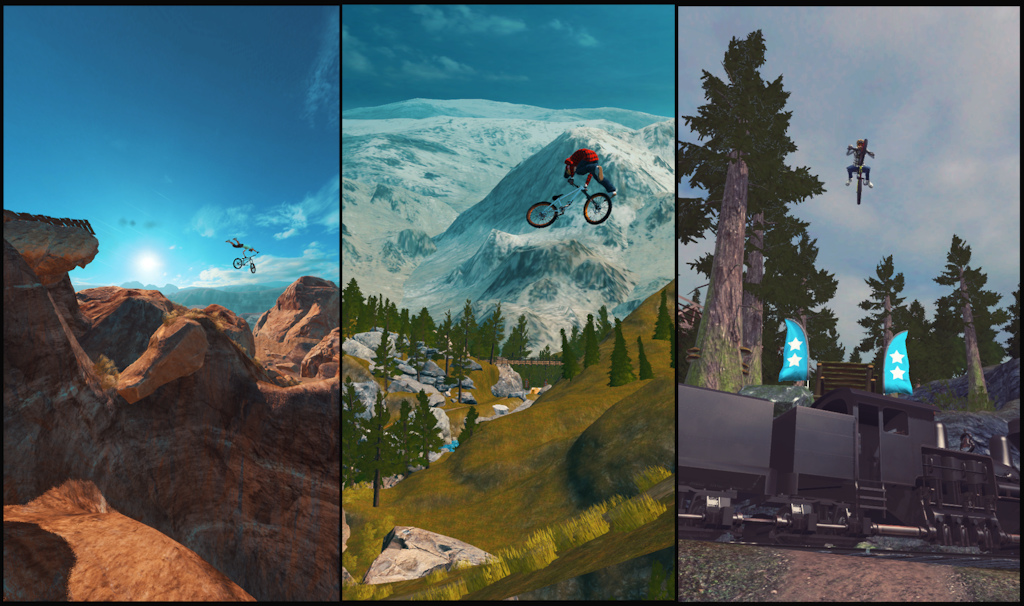 In the real world, MTB is as much about riding as it is about sharing the experience with others. Bike Unchained 2 builds on that premise: in every race of the game you´ll be racing against real opponents. You´ll have the chance to participate in live competitions and events against other shredders from around the globe. This will not only give you bragging rights over the friends you invite to your own custom leagues, but could also give you the chance to win actual real-world prizes.

To become the best, you´ll need to learn from the best. The roster of Bike Unchained 2 mentors – who will teach, challenge and bring the very best out of your riding – is as good as they come. A few new faces have been added to assemble possibly the all-time greatest roster of MTB talent in a mountain biking game. You´ll get all the guidance you need from this international All-Star Team. 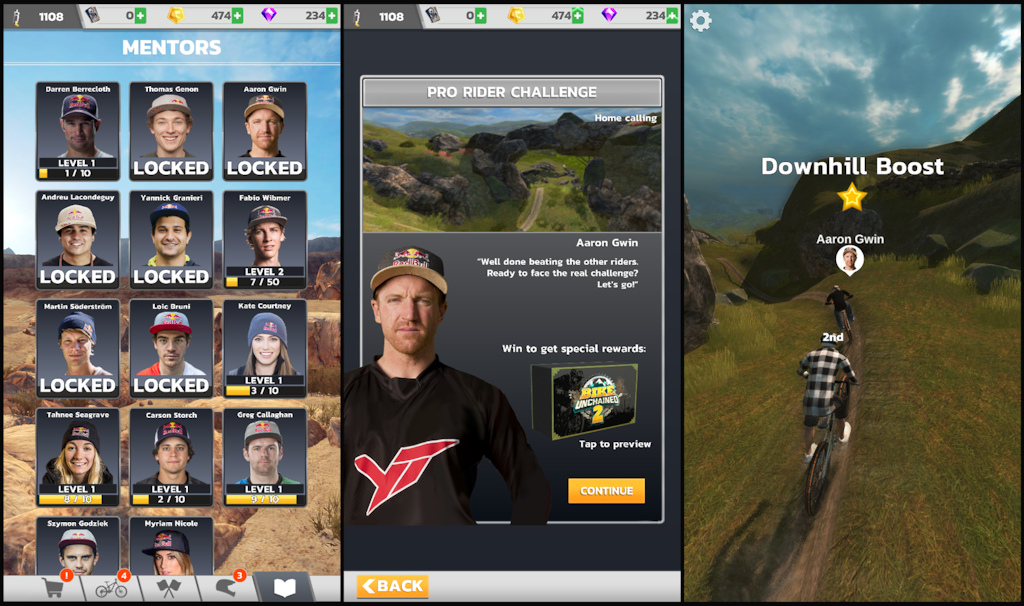 • Aaron Gwin
• Andreu Lacondeguy
• Brandon Semenuk
• Carson Storch
• Darren Berrecloth
• Emil Johansson
• Fabio Wibmer
• Greg Callaghan
• Kate Courtney
• Loic Bruni
• Martin Söderström
• Myriam Nicole
• Szymon Godziek
• Tahnée Seagrave
• Thomas Genon
• Yannick Granieri
While working with and learning from the best certainly helps, one also needs the best gear to truly stand out. The game now features more top quality bike parts than ever before: the more you progress through the game the more options will be unlocked, allowing you to build and ride your dream bike, to stomp the fastest lines and the gnarliest of runs.

If you already have Bike Unchained on your phone you will be prompted to update to the new version.

PauRexs (Sep 6, 2018 at 5:45) (Below Threshold)
But it might help to get a bunch of kids instead of playing bmx and MX apps they figure out MTB is the best... and from this bunch some go to dig that´s good news... maybe this app shoud have an extension of how to go and build real trails...

It's a joke. Please don't try and kill me like a WAKI.

Thustlewhumber (Sep 6, 2018 at 10:37)
I can't criticize top level riders from my armchair and downvote Waki if I am actually outside riding.

clarky78 (Sep 6, 2018 at 1:16)
Sorry, don't get it. Unlike car driving games I just don't get bike games. And I play or have played a lot of video games. The physics don't stack up for a controller. Maybe as a rider I can't relate, but it seems dumb to move weight and lean with a stick. And you can lean mid air, and do non realistic stuff. I get it's non-realistic to begin with but still seems dumb to me. Also, leaning and steering just never come natural. Same with MX games, doesn't work. I have played a few side scrolling MTB games on mobile, that works, you accept the style, but leaning sideways F's everything up. Maybe it's me, as I say, but relating to what riding a bike is really like I find these games unplayable.

Albatrosse (Sep 6, 2018 at 7:08)
moto games like mx simulator or even mx vs atv reflex work great in my opinion, and noone has made a bike game like that yet. i think a downhill bike game with actual dh terrain and functioning suspension could be really fun

genericparkrider (Sep 6, 2018 at 8:32)
@Albatrosse: Exactly, MX Simulator looks hard as f*ck but still rewarding to get right. There's even competitions to the scale of car racing sim leagues. If only it was possible for developers to grasp pedaling...

haggqvist (Sep 6, 2018 at 9:21)
@genericparkrider: yeah, imagine if jlv would release the stability engine for mxsim so someone could use it for a proper downhill game.

Chapelain (Sep 6, 2018 at 4:46)
"so we teamed up with Matti Lehikoinen, Finnish Downhill legend, who was tireless in sharing his experience with our developers so that they could produce the most realistic game out there"
Really? So you failed at it....

steezer (Sep 6, 2018 at 6:05)
Wished they'd incorporate Pumped BMX controls/ interface... Would be awesome to have a slopestyle version of it!

MTB games always suck. Wish they'd work on game mechanics and playability before spending $$ to get riders in the game.

Would love a side scroller with big bikes. and don't make me tilt my phone to play your game. I hate tilting my phone as a control mechanism; that deletes your app immediately off my devices.

"Experience the thrill of riding on the road. Countless miles of blacktop await! Avoid nasty pot holes, try not to get killed by cars! With our real time play, you'll spend hours riding your bike, simulating the real boredom of being a roadie. Plus, with our achievement system, you can upgrade your bike and your riding clothes so you can look like a real Tour De France competitor. Your challengers will drool over your carbon bits and Deore groupo!"