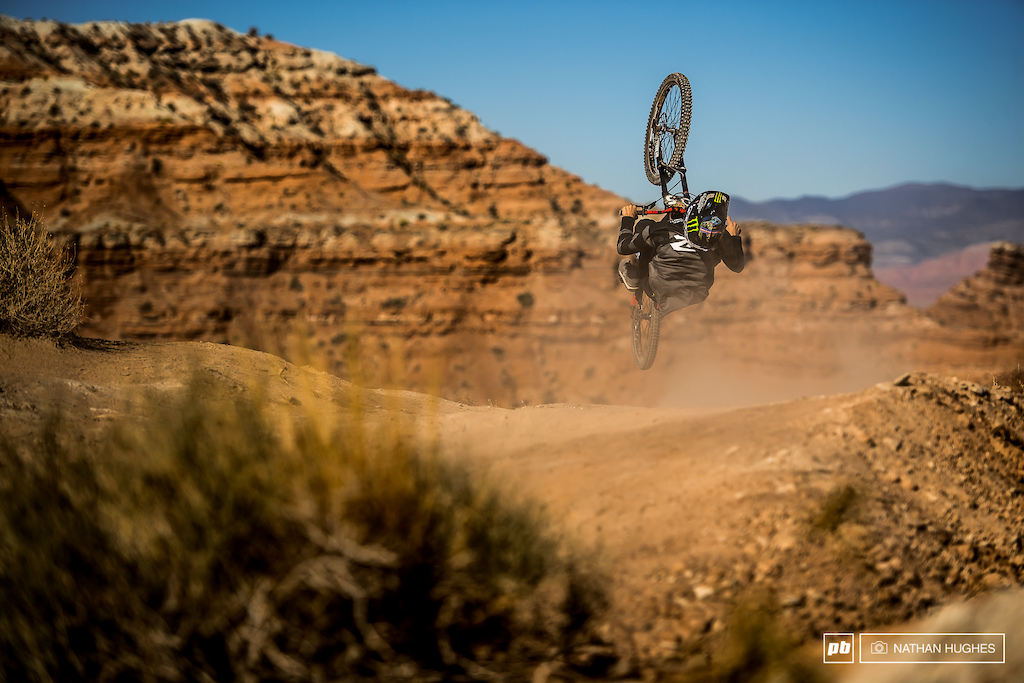 The date has been set for the 2018 edition of the biggest show in freeride mountain biking: Red Bull Rampage returns to the Utah desert on October 26th. This fall, 21 of the world’s greatest freeriders will transform the unforgiving terrain of southern Utah into descending lines of form and function, with the goal of displaying the kind of riding that will place them at the top of the podium at one of the most arduous tests of fortitude on two wheels.

Red Bull Rampage veterans Kurt Sorge and Cam Zink top the list of returning riders this year after taking home gold and silver, respectively, in 2017. Ethan Nell, the hometown hero who took home third in 2017 plans to continue to show his growing skills on the the mountains outside of Virgin, UT. The question everyone wants answered is whether the tenure of athletes like Sorge, Zink and Semenuk can keep pace the new era of rippers, especially those with year-round exposure to the riding conditions of the arid Southwest and the totally new location for 2018.

The elite group of 21 riders will create their own handmade lines down the mountain without the use of power tools. As a result, no two rider’s path down the near-vertical sandstone ridges will be the same. In advance of the competition, the riders, along with their two-person build crews, will spend four days of building and then four additional days to practice in order to build their ultimate line in what is touted as one of the most intense contests in the world.

Invited Wild Card and Alternate athletes to be announced.

Attendees of the 2018 Red Bull Rampage will have more than just the world class riding to look forward to watching, this year will feature more ways to enjoy your time in the Utah desert than ever. More information about the expanded consumer experience, improved ticketing packages and new location in the months to come. This year’s Red Bull Rampage promises to be the best experience yet.

RynoRodrigosouraus (Jul 16, 2018 at 15:16)
Casey Brown and Chelsea Kimball. Check her out on Instagram and go down a bit for her Utah riding @chelseasendsit @PHeller:

PHeller (Jul 17, 2018 at 12:26)
@zyoungson: Eff that mentality. Back in history, there were plenty of men who said "women are too sensible to go into space" and "women are no-where near the skill level of male astronauts." "A woman could never swim across the Bering Straight" all kinds of "cants" that prevented women from even trying. History has allowed women to try, and society is better for it. A female run at Rampage doesn't need to be the biggest or the best, it just needs to be allowed to happen. Without inspiration there cannot be competition. I'd be really curious to know if someone like Casey Brown has even been invited?

RedRedRe (Jul 17, 2018 at 23:11)
@PHeller: why would A rider be invited just because of the gender? Is she in the top 20 people “applying” for the job? From what I have seen, she is not. By far. This is not to put down women, there are plenty that kicked men’s in competition- I can remember the French lady driving Audi group b winning pikes peak-pikes peak if u know what I mean-Jacque phelam early mtb hero. It is just about fairness of competition. If then people get invited because of social political (business) reasons, it is not a sport anymore but another master chef.

emccurrie (Jul 16, 2018 at 18:06)
Ok, I’ll be the first to say it. Jordie lunn NEEDS to get an invite.
He has proven himself to be one of the most creative and gnarly guys out there. He deserves to be in Rampage.

damo (Jul 16, 2018 at 13:27)
The top ten from last year get an automatic invitation. Lacondeguy and Vink weren't top ten. Doesn't mean that they won't get invited.

Milko3D (Jul 16, 2018 at 14:12)
A lotta slopestyle riders, don't whine later on when they do more corks and flips and less "true american original big mountain"

lobohusky (Jul 16, 2018 at 14:15)
Judges didn't want to be accused of robbing him again, so they just decided not to invite him to avoid the hassle. #BizetGotRobbed!

Full run, top to bottom, two back flips higher up on mountain, another front flip, followed by the double. Difficult line-choice (not most difficult), good flow, all of the ingredients of a much better score than achieved. I'm not saying he should've won, but 11th?! Go back and watch and tell me you still disagree. There's a reason he won the people's choice award, not kid's choice

scott-townes (Jul 17, 2018 at 12:10)
@lobohusky: Eh, goes to show knowledge of how events are judged doesn't come with age. His line choice was the safest/most basic way down. Yeah to you it looks super gnarly but compared to what everyone else was riding, it was not tech. This is a big mountain comp where the lines are judged far more heavily than a double flippy doo on the safest jump of the course. It was cool but fair score.

scott-townes (Jul 17, 2018 at 12:14)
@lobohusky: Oh and people's choice is bogus. Simon Dumont won a big air comp. with a double front flip over a double cork 12. It just so happens most voting have no clue what they're talking about.

lobohusky (Jul 17, 2018 at 12:47)
@scott-townes: I guess it also goes to show that humility doesn't come with age either. Terms like "super gnarly" and "flippy doo" go right up there in the sarcastic douche bag response category. And anytime you start a sentence with "it just so happens" when completely founded on an opinion makes you sound more 13 than 31. But hey, you keep fancying yourself an expert judge and the rest of us that vote for the people's choice award will continue to be in awe of the talent and gusto that these athletes exhibit at these events and reward them as such

sino428 (Jul 16, 2018 at 17:50)
Who do you think pays for things in sports like this? Until you are willing to pay massive ticket prices to go see the event live or shell out money to watch it on tv like other professional sports, be thankful for the sponsors. They are literally the only reason sports like mountain biking exist on a professional level.

How do you not invite one of those guys before Rogatkin?

I mean if he spoke up and asked to go I think he'd get an invite but I don't think he's gonna do that. Maybe next year.

twelvemonths (Jul 16, 2018 at 15:03) (Below Threshold)
@onemanarmy: What about other British free riders? Tom Isted? He's a nutter he'd be great if Reynolds actually gave him a chance and invited him to dark fest

TombPhoto (Jul 16, 2018 at 16:22)
@twelvemonths: Haha! As decent as he is, he's barely been on the scene 5 minutes. Earning spots at these events is still a thing, whether they're comp based or not. You just have to go about earning those spots in different ways & the right ways...

Connerv6 (Jul 17, 2018 at 9:00)
I went to Oktoberfest then came home and left for Rampage. Felt like I needed an AA meeting after that 3 week stretch.

krumpdancer101 (Jul 16, 2018 at 13:58)
Please everybody make sure you have a proper passport this year. We all know there’s plenty of people who don’t have the proper ones already here.

jrocksdh (Jul 16, 2018 at 15:44) (Below Threshold)
@ismasan: ah, part of it already has.
Been to California lately, or look at the Financials, schools, hospitals..
Meanwhile in Canada....nope, turn around.

Tallboy97 (Jul 17, 2018 at 12:33)
The ride in and out of the venue is almost as entertaining as the event. hahaha A few days of riding around the Virgin area and then watching Rampage. Now THAT is a good vacation!!!!

Sweatypants (Jul 18, 2018 at 10:11)
Are you still allowed to spectate practice/qualifying? I haven't been in like 6 years. I see the event is on Friday now instead of Sunday, so how does that work as far as how long to stay?

theedon (Jul 16, 2018 at 20:01)
Seems like the biggest fail to have Graham Agassiz off the pre qualified list every year. Dude is a top dog in this game and should be given the nod without having to qualify every year.

huntstyle (Jul 17, 2018 at 6:51)
Why doesn't anyone understand that the top 10 from the previous year are pre-qualified? This isn't just some random list. It's literally the finishing order from last year.

cunning-linguist (Jul 16, 2018 at 12:12)
Does anyone really give a turd anymore? I mean, it used to be the highlight of the year for me, now I’m just hoping nobody dies. Perhaps it me that’s got too old, but I feel it’s time for a change.

laxguy (Jul 16, 2018 at 12:15)
I've definitely been feeling more nervous about this event in the past couple years, but it's still so raw and awesome that I can't help but get excited. Here's hoping everyone makes it through with clean runs and no injuries!