Join Pinkbike  Login
Our good man, Mike Kinrade took one hell of a digger while practicing on Thursday for Sunday's Finals (he was pre-qualified and had randomly drawn the #1 plate). He just got out of surgery late yesterday to repair his broken tib/fib. Julian was able to visit Mike at the hospital yesterday and Mike just fired a few pics over to let us all know that he's ok. 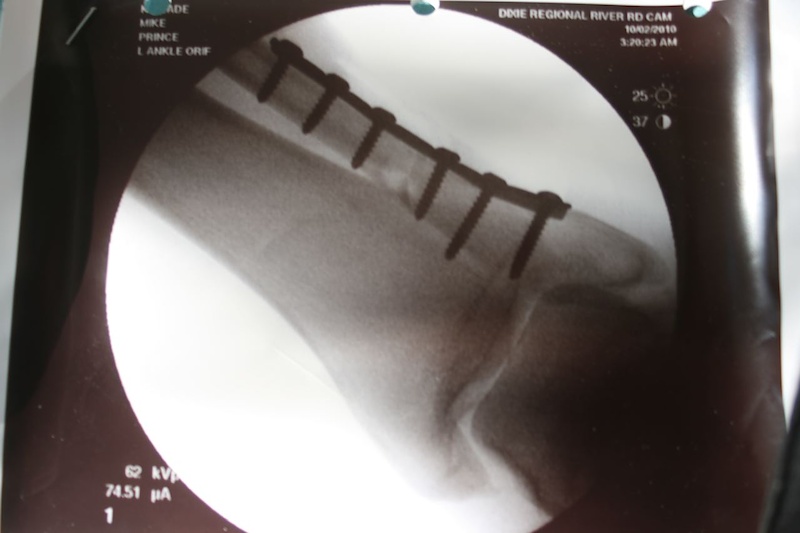 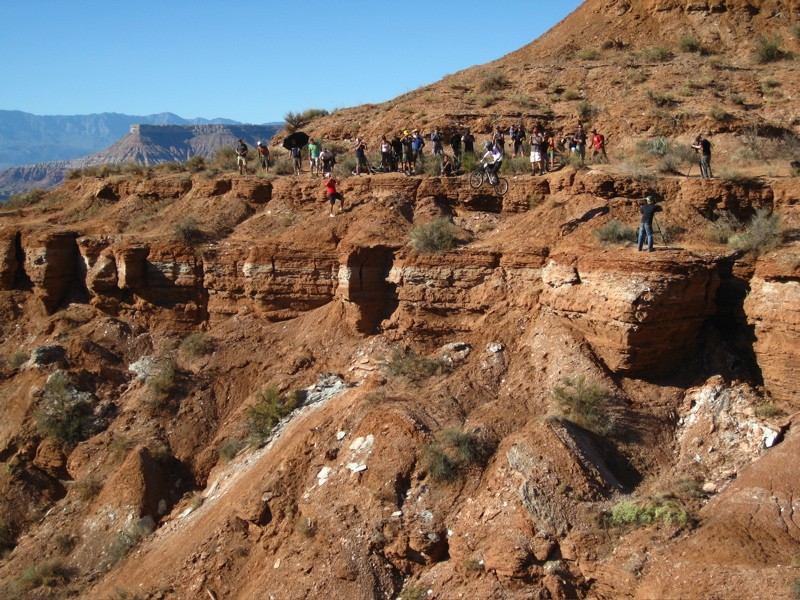 Kinrade didn't compete in qualifying as he went down in practice on this line. This photo is from 2008 showing the same hit. We went to check up on Mike in the hospital. Listen to him talk about the crash and his injury. Get better budday!

"I was riding the finals zone solo practicing my line, and working my way down the course and it came to the 2nd to last hit. A big stepdown that I had hit in 2008's Red Bull Rampage and was feeling confident on. I had never hit it from a still point on the hill, I had always come into it from the move before, but I felt like I had the same speed. In retrospect I should have had someone judging my speed for me. Claw gave me the nod from the previous run-in, but we didn't really converse much more than that. As soon as I took off I knew this was going to be a hard hit so I just hung on till the end. I snapped my tib/fib upon landing, pretty mellow considering the size of things. Everything else is fine (even my bike feels fine, suspension and all) Surgery was done the morning after @ Springdale hospital and the Doctors say it couldn't have gone any better.

See you all soon! Happy trails! 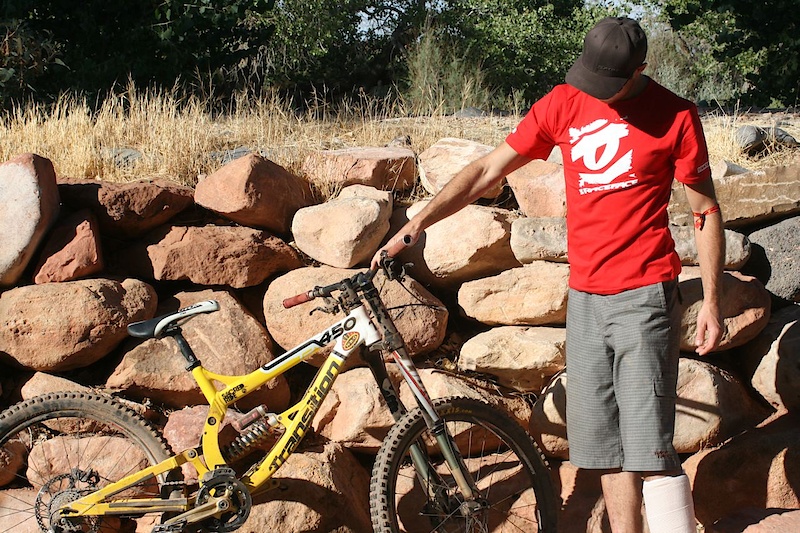 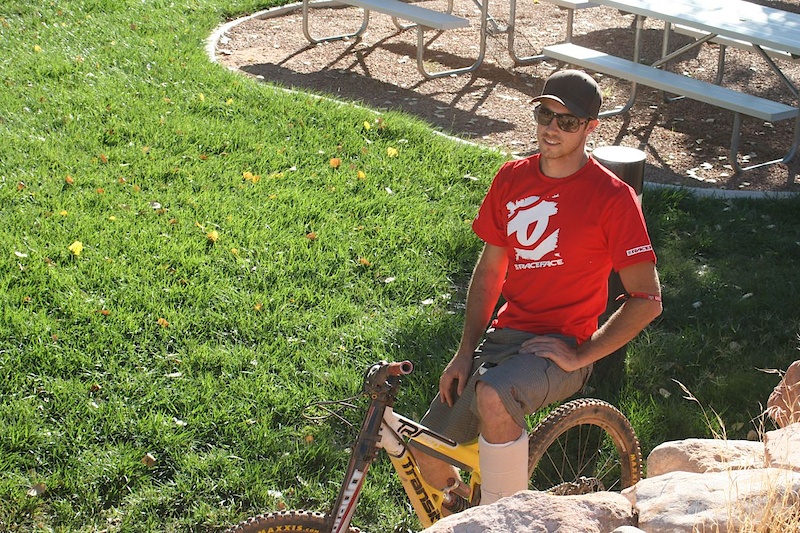 Still pedaling...
"Dusty but still good to go. Aside from a twisted bar, even the suspension feels as plush as ever. Not the best way to test the durability of a bike, but after logging over 600,000' vertical feet this year, and shredding the Rampage until this gruesome end, the bike is still ready to shred.

grandmastere (Oct 2, 2010 at 20:26)
Remarkable professionalism in taking the time to talk to media and in telling us that the bike and components stood up to the huge crash. I think if I'd just broke tib/fib and had surgery I'd be too pissed to take the time, and only interested in getting home. I guess it's this sort of dedication and this level of professionalism that has allowed Mike to last all these years and still make a living.

Get well soon and thanks for taking the time to give us an update!

IanSunday (Oct 2, 2010 at 22:26)
i had a pretty much identical break a few years back. my story isnt nearly as hardcore though. heal up quick, ski seasons just around the bend

i already had utmost respect for kinrad and transition, now i just want to air mail those guys a beer. holy shit

kindad (Oct 3, 2010 at 8:50)
Thanks for all the positive vibrations pinkbike! To answer some of the questions, it is a Surgical grade Steel plate, and I was pre-qualified for the finals and was just anxious to get practicing. You will all see me soon shredding again. Little things like this can't hold us riders down. Peace!

gordonshred (Oct 2, 2010 at 17:25)
I wonder if extra medical staff or maybe trauma specialists are brought in to the hospital closest to Rampage in the time around the event. These riders are definitely pushing the envelope and putting their health at risk for the sake of the sport and our entertainment. I never want to see anyone get hurt especially in a serious way. Everyone riding Rampage amazes me with their bravery (craziness?) and deserve huge respect!

masher (Oct 3, 2010 at 7:54)
There's enough tourists hurting themselves in Utah on bikes, ATV, motos, snowmobiles, etc that all major hospitals see this type of injury year round.

Hope you're up and riding again soon man!
Also, nice to see your bike survived better then you did, haha!

haro-x6 (Oct 2, 2010 at 19:28)
casts really suck. i was in one for eaght weeks for the summer. it relly sucked. but i am back riding. sorry that you broke the biggest bone in the body. how long will it take to heal. i am gessing from the xray it looks to be a nonunion fracter. 6-8 weeks. now dont take the cast off too early. it really sucks comming out of a cast. watching your frends go biking, while you at sitting and wasting away. i am gessing that you are going through the 5 fases of breaking a bone. first one is pitty. second is anger. 3 rd is depression 4 is the light at the end of the tunnel. 5th is your leg starts to feel better and you want to take off the cast, but you cant. sorry for the long comment. i was in you spot 5 times. i had whey too many casts. but i am shure you bone will heal if you dont move your leg. and o yea dont smoke and drink it limmets the blood flow to the broken leg and it will take a long time to heal.

Also, PLEASE spell-check your posts. It was painful trying to read your post.

OrangeGoblin (Oct 3, 2010 at 1:46)
i have an open fracture of my lower tib and fib, (bone came through the side of my ankle) i had a tibial nail the length of my shin with 3 screws and i was rolling around after 3 months, and riding properly after 6, DH season 8 months later.

How is this fracture so different with such a huge recovery period?

And it titanium in my leg, and the same in my mates, hes got his out and its crazy light.

localmotion (Oct 2, 2010 at 18:52)
Get better soon. Even with a broken Tib/Fib. you could probably still send it bigger than anyone else out there! Hope to see you riding again in Nelson.

nouser (Oct 3, 2010 at 3:02)
Thats transition for you dude, some of the best bikes around if not the best, top 3 with out a doubt. Good luck healing up and shred shit up next year

z-man (Oct 2, 2010 at 17:54)
actualy,it's hardly ever ti, only to replace joints and hiigh friction locations on the body. that is probably surgical grade stainless steel. i have 10 screws and a plate in my shoulder. fortunatly i dont know how much they cost cause my country doesn't have a lame 2 tear medical system.