Santa Monica, Calif. (Dec. 23, 2014) – Taking on 1,000 feet of vertical ridges off the never-before-ridden back cliffs outside Virgin, Utah, 20 of the most daring and fearless mountain bike riders in the world headline Red Bull Rampage, presented by Go Pro, on NBC, Saturday, Dec. 27 at 4 pm ET as part of a two-hour full-length special. The one-of-its kind competition is part of the Red Bull Signature Series, the most progressive collection of action sports events in the world. 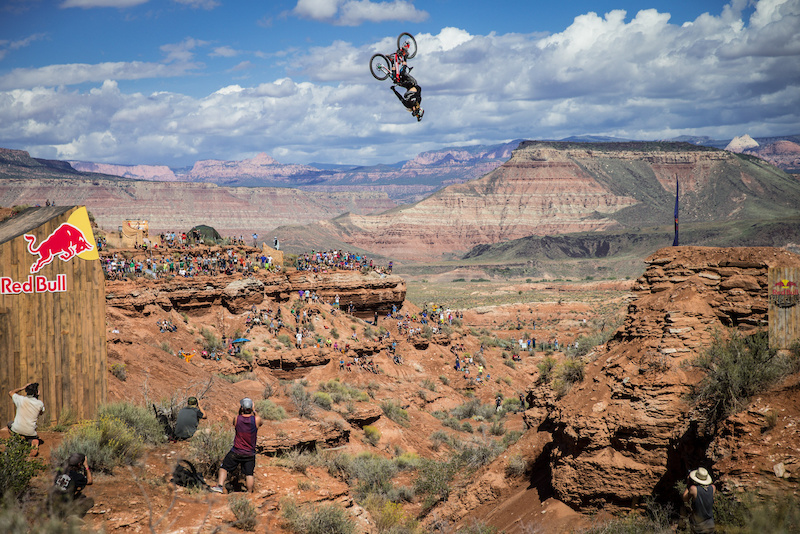 Gone are the claimed lines, groomed run-ins and massive built features. An NBC audience will witness riders traversing a new set of exposed ridges, massive wall rides, and new canyon gap as part of the most hallowed event in the sport. Red Bull Rampage presented by GoPro is brought to a national television audience in partnership with Dodge Dart, Polaris RZR, Army National Guard, and Utah Sports Commission. 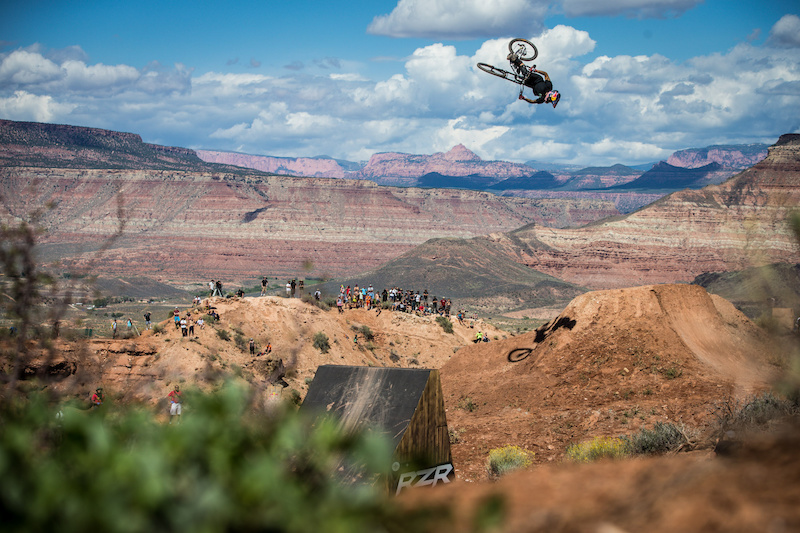 Fans can join the conversation as part of the broadcast by searching #RampageOnNBC.

metaam (Dec 27, 2014 at 4:38)
We're airing this awesome bike competition with some of the best riders in the world,should we employ some top notch commentators for it?

No let's get in a couple of twats who know nothing about the sport and can't pronounce the names of half of the competitors correctly.

timsim07 (Dec 27, 2014 at 4:56)
I can't wait until the guys at redbull realise that they need to get some half decent commentators for rampage and crankworx and that all it would take is a couple of emails to guys like tippie. Until then we'll be stuck with Brad Jay

scott-townes (Dec 27, 2014 at 7:18)
Yuuup... been dealing with the same shit in skiing for a while (although its gotten a tad better). Apparently they don't feel the need to properly represent the sport but instead to dumb it down to nothing for all the clueless people who happen to stumble upon the broadcast. They don't do this for any other sport like golf, baseball, football, soccer, hockey, moto-x or freestyle moto, etc. etc. It makes zero sense.

sino428 (Dec 27, 2014 at 7:39)
To be fair, the BBC broadcast isn't geared toward the person who is into mountain biking. Everyone one of us hear has already seen the live broadcast. We are not the target audience. It is geared toward the casual viewer so I can understand why they dumb it down. They don't do it with mainstream sports because they don't have too. The target audience in those sports already knows the sport, they don't need a dumbed down version. It would be nice if they had a mountain bike guy as an analyst instead of a BMX guy like Harlin, but they will always dumb it down a bit when the target audience changes.

scott-townes (Dec 27, 2014 at 8:05)
^ Then how come they don't do it with skateboarding/bmx/moto/snowboarding? They're all similar in popularity as MTBing in regards to the general population. It straight up makes no sense. NBC is run by clowns.

SithBike (Dec 27, 2014 at 10:35)
"Skateboarding/bmx/moto/snowboarding" all make way more money (for the riders) than MTB too. And unlike MTB, thier products are not overly marked up for the consumer either.

tworldsmine (Dec 27, 2014 at 14:27)
David Attenborough should do it. I'm sure he would appreciate this fine surrounding and the amazing life species travelling through the space in a close conjunction with the technology on the edge of the human capabilities.

AndyMandura (Dec 28, 2014 at 14:18)
Even the "live" version of Rampage this year was delayed and had fake comentating.. That hurt my soul, I actually missed Ryan Myer..

scott-townes (Dec 28, 2014 at 14:22)
sino- They do but they don't butcher the riders' names, tricks, or act like general gapers to the sport. You can dumb it down without sounding like a complete retard.

Tmackstab (Dec 27, 2014 at 8:02)
I hated how they called him Norby until I watched an old Kranked movie and Norbs calls himself Norby. So whos to say.

bfjcc (Dec 30, 2014 at 12:25)
the industry should be supporting the athletes that they made money from. People like Tippie who aren't competing at Rampage anymore, but are an integral part of the industry, and put their neck on the line time after time, they deserve to be commentating, not some person who got a certificate in broadcast from a technical college.

DylanL1 (Dec 27, 2014 at 7:35)
I wish Australian TV aired this kind of stuff! But not to worry, on my birthday I got the joy of waking up early and watching Rampage live at 5am. Best start to a birthday ever!!!

si-paton (Dec 27, 2014 at 9:44)
sino428 is pretty close to the mark. We all agree that it would be awesome to have someone at every televised event that knew the riders, their sponsors, their history etc.. like the back of their hand and were also professional enough to appear on mainstream like NBC. Remember this is aired at the mainstream audience hence the mainstream commentators I guess (apologies I have no idea who they are or their past so I am not knocking them).

At Crankworx, Eurosport etc.. where I have worked in the past you have a Host Announcer, think Brad Jay who holds the programme together, intros to the programme, schedule, takes you into the breaks and calls the rider over the start line and across the finish line. Then you have a sports announcer, the expert in the field. It's their job to have all the history, specs, rider knowledge etc.. They do the 'Filling' as i'd call it. Hope that helps a little!

Either way we should be thankful MTB is mainstream and of course we all want it to be better!!

sdiz (Dec 27, 2014 at 6:45)
Tell your friends, tell your family to watch this!! Let's take this opportunity to get as many viewers as possible so perhaps we can get our sport bigger and better future coverage!

b4uwereborn (Dec 27, 2014 at 8:41)
Or you could turn the volume down and put some music on....just an idea, ok so they may have not quite got it right in some peoples eyes, but hey lets just watch and enjoy it. Good point well put Si!

Well, that would be cool, right?

si-paton (Dec 27, 2014 at 7:36)
Knocking Brad Jay? He has done the X Games for the past dozen years as well as the Russian Winter Olympics. There's a reason he gets all the big gigs and it's not because he's good in bed!
I've worked with him for the past three years at Crankworx and he never skips a beat, with all the pressure that goes on as a commentator to a live crowd, directors talking in your ear etc.. It's no easy job. Maybe try it some day, come to a BDS on the Saturday and have a go. Toby and myself will give you some pointers or perhaps you could give us some from the sounds of it?

pushingbroom (Dec 27, 2014 at 8:43)
Hey Si. As a guy that's worked a little bit in film/tv I understand the craziness that someone like yourself and Brad have to work with. I have to agree with the masses though that the commentators for this most recent Rampage were terrible !!
As a professional in your field, it would be bad for you to knock those commentators but as a man so passionate about this sport and connected with the industry you must have some influence and a voice to those that make these decisions.
Rampage is a difficult event to put on, televise , judge etc. We know that and we're not asking for the most pro announcers, just someone who knows a bit more about what's going on and is passionate about the sport. Who knows, someone like that may even appeal to the masses that don't ride and they might actually get a better understanding for the sport and want to try it themselves.

Also could have done without the Brad Jay - bed - comment haha.
Later Si, enjoy the English snow that's fallen. Stay unclipped and get a ride in that white stuff before it melts.
Cheers.

AndyMandura (Dec 28, 2014 at 14:22)
Brad Jay is wayyyyy better than Troy Mannering, I'd rather have Brad cover a slope contest than most guys they put on..