Join Pinkbike  Login
Thursday is the day that people started to send it. Red Bull Rampage 2010 has been on for a few days now, but today, things finally started to happen, and moves were being made. Lines have been dug, riders are pumped and the judges are ready!

Check out all of today's action, 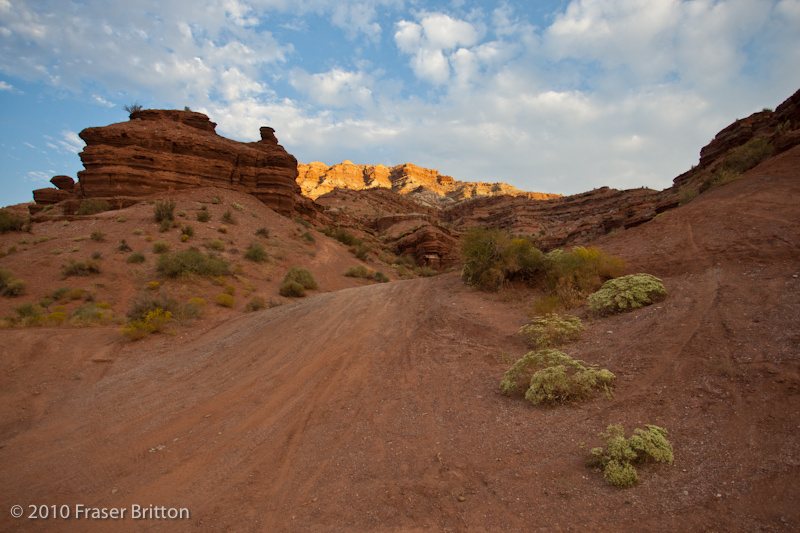 Pop quiz - What is this location and why is it special? Hint - it has nothing to do with flying monkeys. 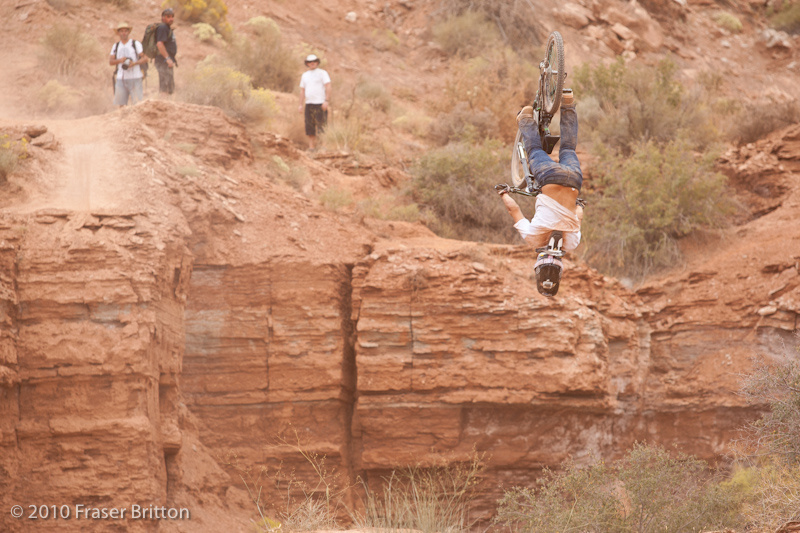 Things got off to a roaring start this morning in the quali zone when whips turned into Montgomery getting inverted. Things are about to go down... 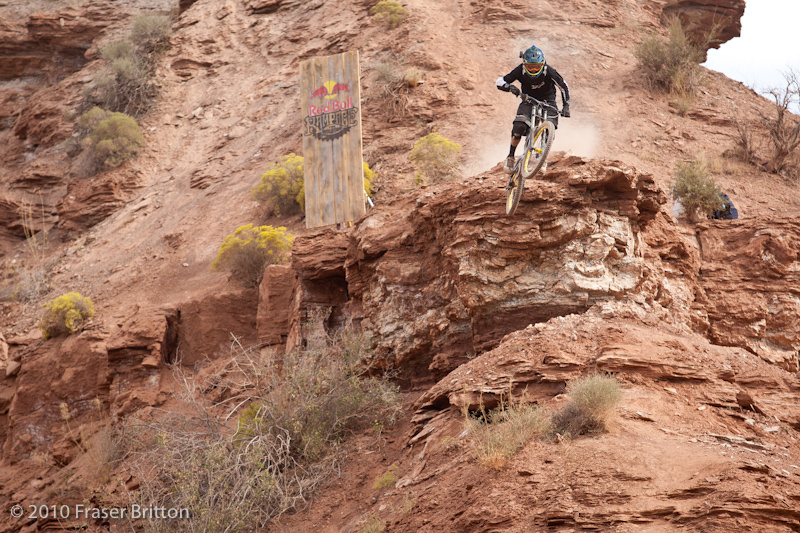 T-Mac and Alex Pro kept things interesting by blasting a nice fat line off of ridge 1. Alex is ripping off the fastest big mountain lines I have ever seen. 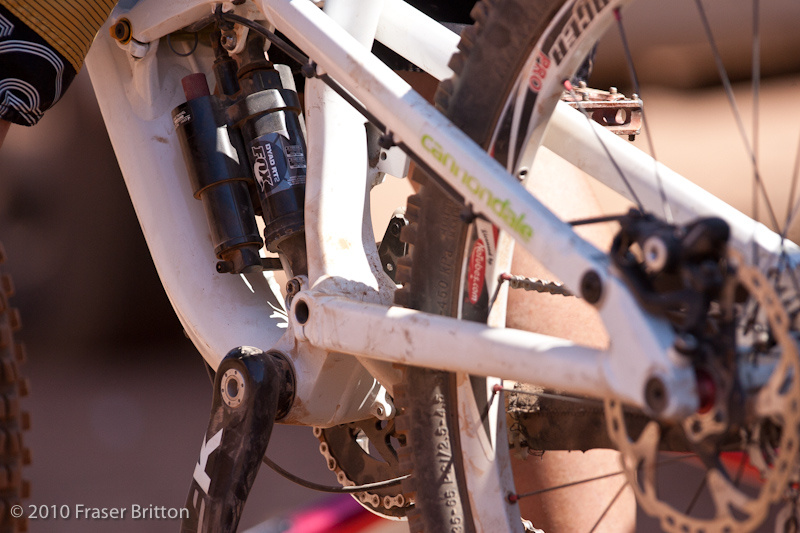 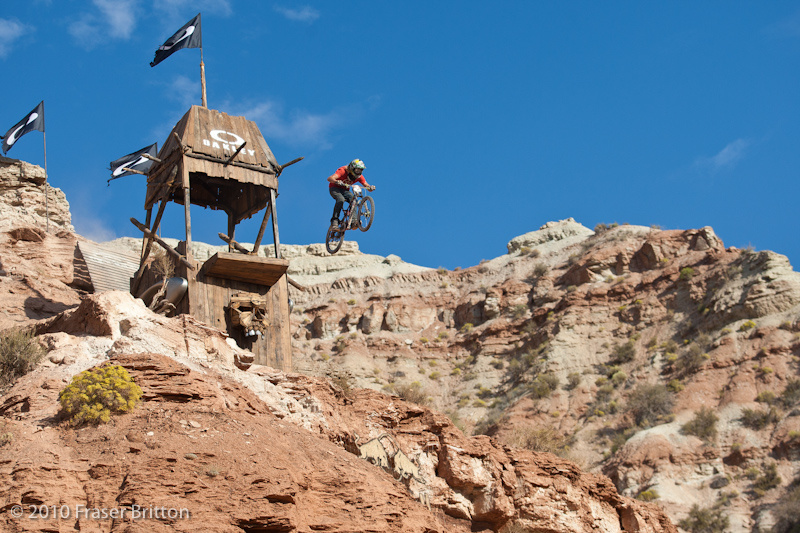 The run-in to the Oakley Sender got modified by Bourdon this morning, and it was off to the races. Here Kelly McGarry goes massive. Unfortunately he hit a soft spot in the landing and got ejected. He walked away, bruised, but not broken. 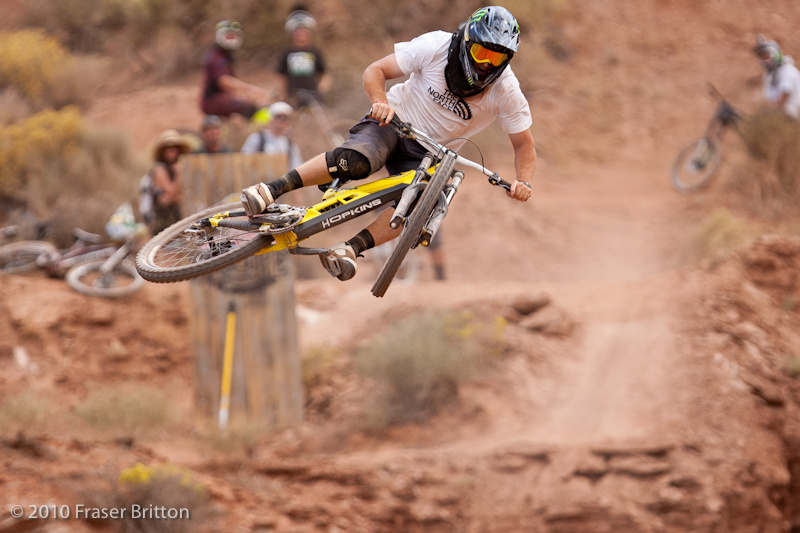 Hopkins throwing down some early morning whips after a session at the old Red Bull Rampage venue pre-coffee. 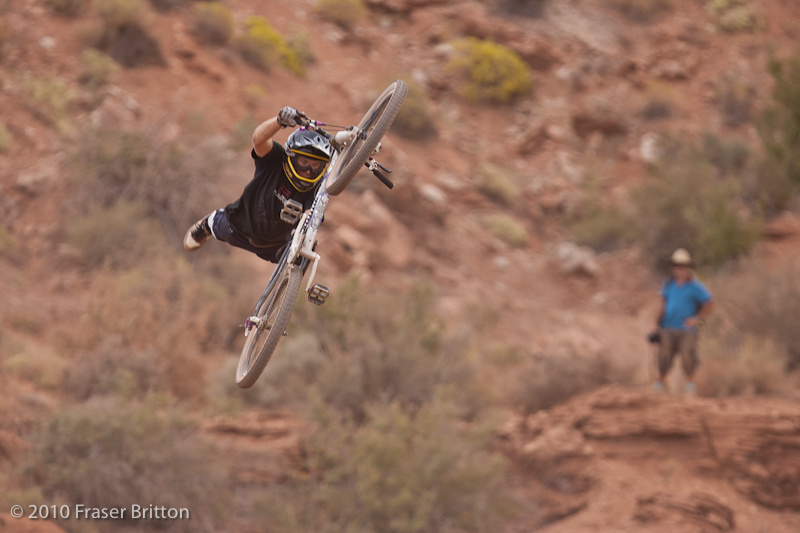 Greg Watts. Superman. Half the riders suggested that they should have a great big whip session on this one massive jump after the main event goes down. 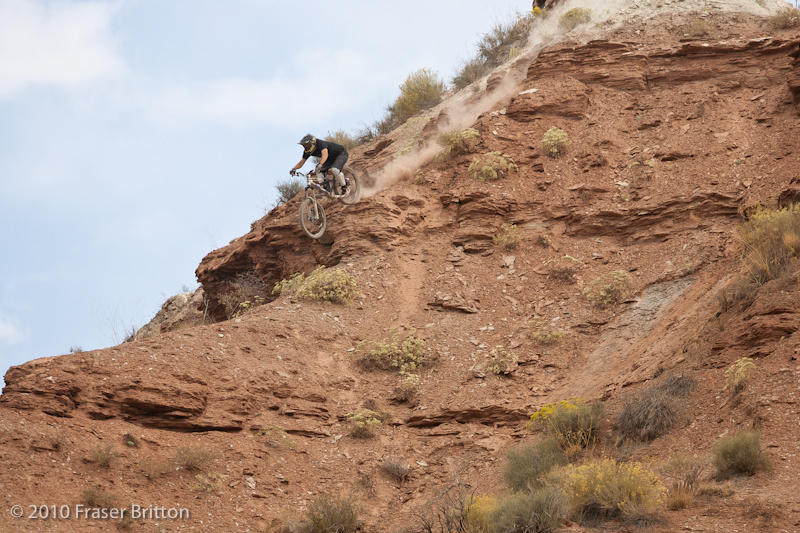 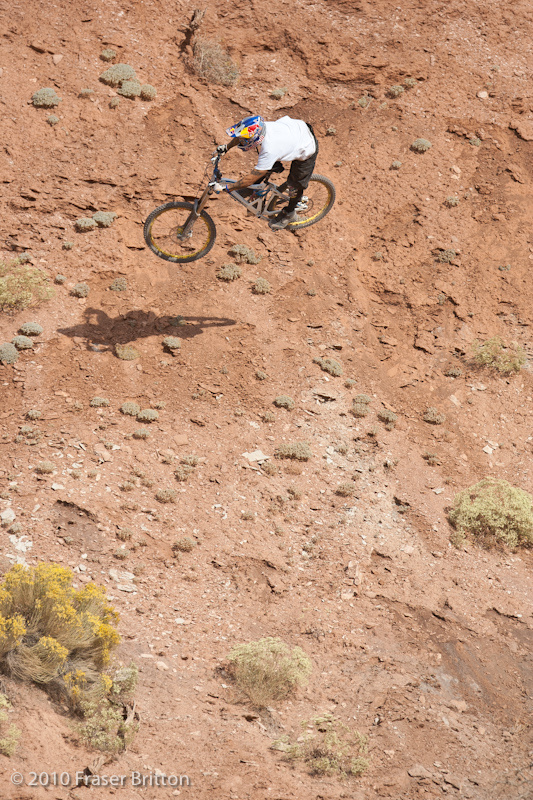 Andreu is on a Mondraker this week, officially, after his contract expires tomorrow. Until then,
it's a Kona. He has some pretty creative lines here, and may be tailor made for Red Bull Rampage. 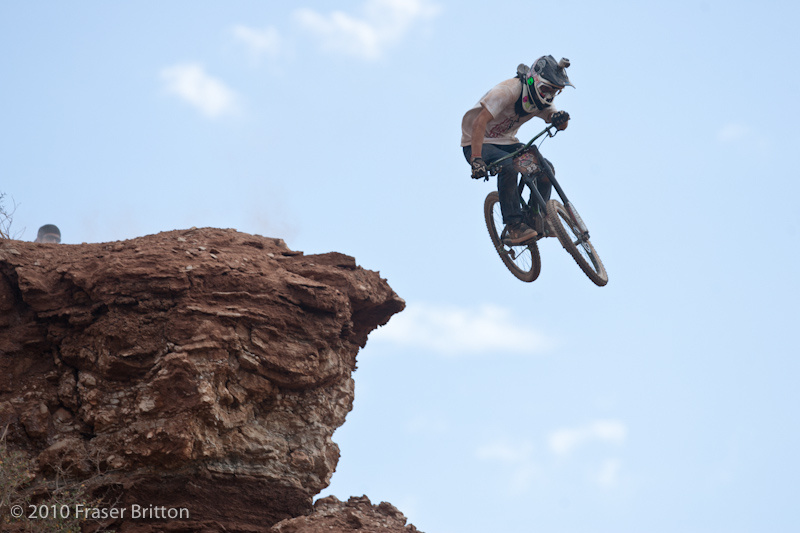 Montgomery sending the main line on Ridge 1. Nothing but blue sky and happy thoughts. 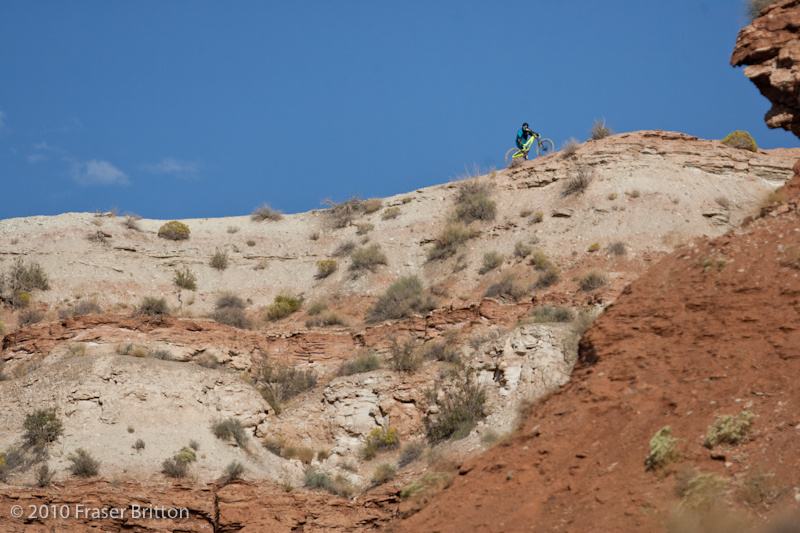 One of the last guys to head up today was North Van's Thomas Vanderham. Thomas has a mega creative line for Sunday and waited until the heat had subsided to ride it, after putting in some finishing touches way up high all morning. All alone, high up on Ridge 3... Vanderham is lying in wait.
Thomas Vanderham talks about hitting the massive canyon gap during practice this morning... 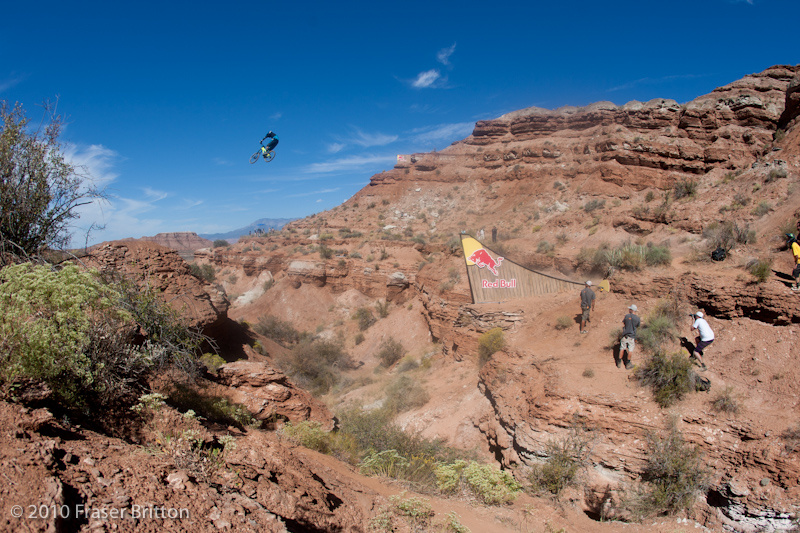 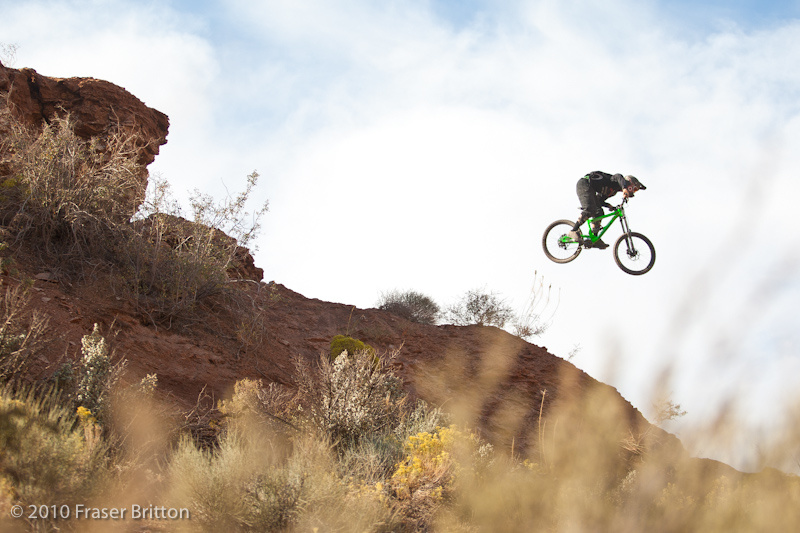 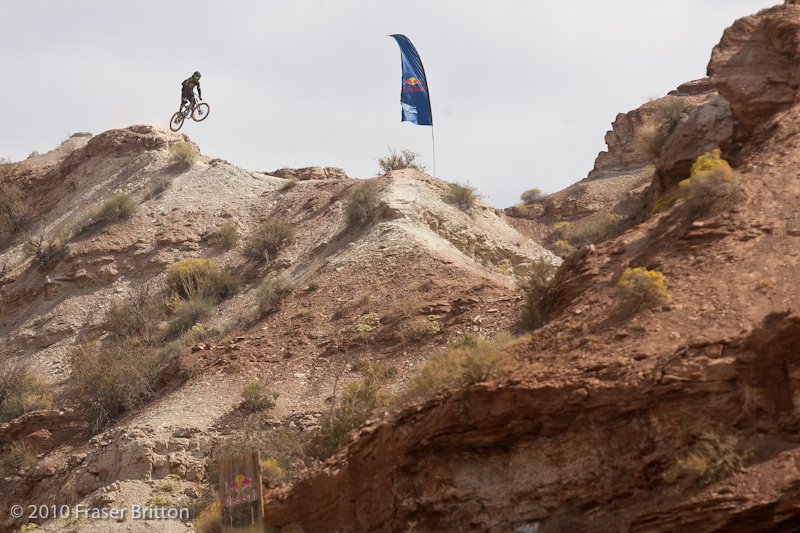 Tyler McCaul is here holding down the family name and goes large while injured brother cam works as a commentator.

Sysics (Sep 30, 2010 at 23:44)
This will be the hardcore test for the Mondraker Summum. I own it myself and are very intereseted in, if it will has problems at the Rampage. The frameweigth is absolutly stunning but also scary.

tom-cuthbert (Oct 1, 2010 at 1:38)
^ Yeah that's what I was thinking, it's not really a FR frame unless they made a custom one for him. He's gonna be taking a beating with that head angle unless he changes it with the new headset, it ain't made for freeriding.

bxxer-rider (Oct 1, 2010 at 2:18)
sysics, a friend of mine had one, took him one race to crack it beyond repair. i want to see CG killing it with his insane French style!

this would be f*cked up, if they did the frame stronger as the available version.

fraserbritton Plus (Sep 30, 2010 at 22:27)
No one is allowed to shoot video here, except Redbull themselves. They have 1,2 mill invested, they are shooting in 3d and they have helis and a massive production crew. Wait for it. It'll be worth it.

there are too many guys that deserve it though, so may the best rider win

cydaps (Oct 1, 2010 at 1:49)
I spy lots of GoPros which will at last give a true riders eye view of this epic event. Can't wait, this is going to be awesome!!! If there's some 3D as well (as fraserbritton suggests), this is a must buy for BluRay when it's out!!

morphinemelisha (Oct 1, 2010 at 7:32)
hahahaa Benders just gunna try to drop the whole canyon to the finish line, gunna do nothin more then come ejecting off that bike. Vanderham, and Strait. Montgomery is gunna style it up to make it look the best.

DanMan89 (Oct 1, 2010 at 8:59)
Fuking so sick pictures man, makes me want to be there for defo like. Get a nice big karpiel aramgeddon with risse bigfoots or super monster lol, or the astrix halo!!

DanMan89 (Oct 1, 2010 at 9:14)
santacruzbulit, i thought bender was finished because his back is destroyed from all the mega drops lol, i havent heard anythn about him for ages??

campofchampions Plus (Oct 1, 2010 at 17:57)
Good work, great shots, you must be sweating like a pig hauling all that equipment around. Ken

jon-boy (Sep 30, 2010 at 22:17)
Was the location where Cedric attempted his first back flip?
Below threshold threads are hidden

I sure would want to see where the hell I'm going, especially if I was going THAT BIG!