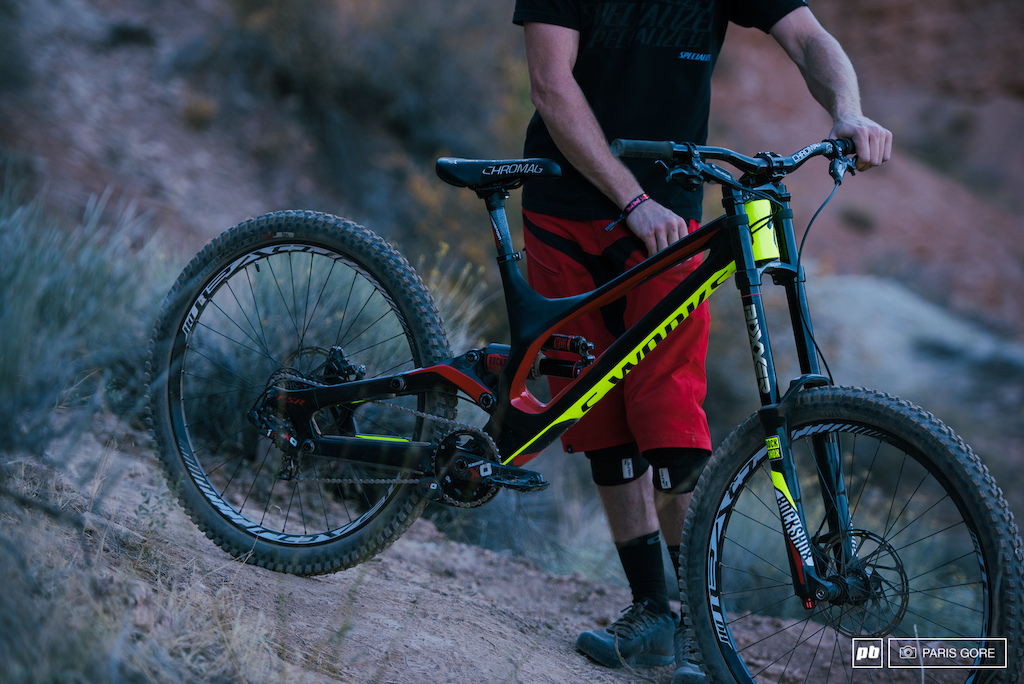 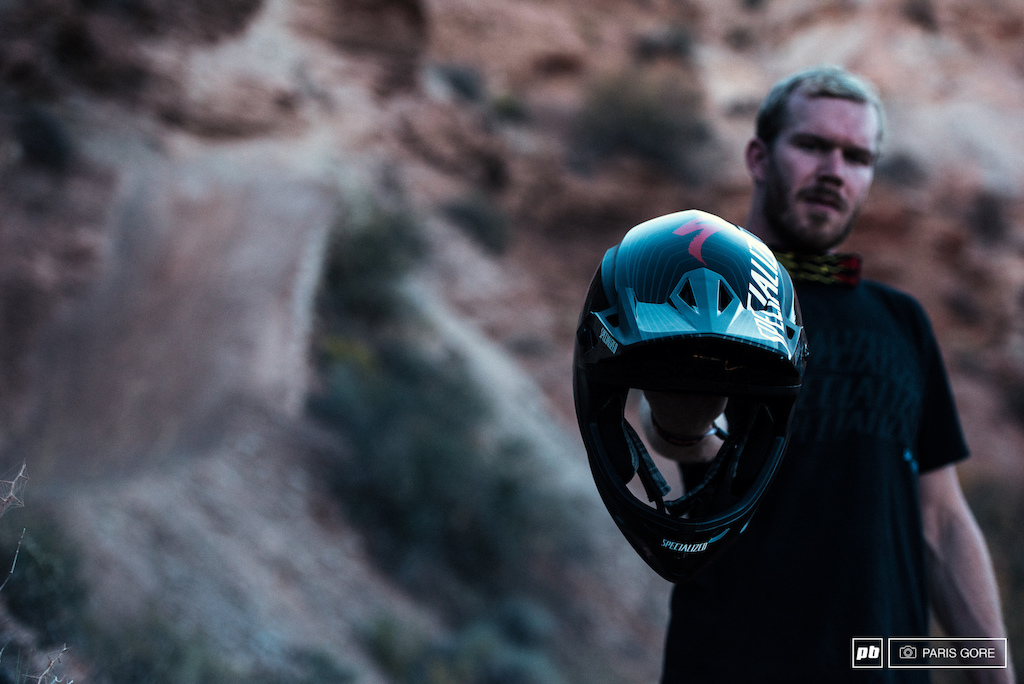 Kyle Norbraten is always a calming force at Red Bull Rampage. Talented and incredibly humble, his is an interview we have sought year after year. This time he took a few minutes in the shade to talk to us about how he handles his mental game, sharing lines, and his season of change.

In the years that you've been coming to Rampage you haven’t always had the best of luck, you've had some decent crashes and of course the #norbsgotrobbed campaign. Why do you keep coming back?

I keep coming back because Rampage is really the one and only big event/contest that I do in the year that really challenges me in a different way. I'm not always comfortable riding in front of people or in big groups. I'm more comfortable just being on a trail with no stress. Rampage pushes me to prove to myself what I'm capable of, and to go out and ride terrain that pulls me out of my comfort zone.

How do you deal with the mental aspect of Rampage - the stress, the fear, the uncertainty about weather?

Just knowing how Rampage works helps. There are so many variables, like with what’s going to happen with the weather, with the wind, or rain, or storms, or what’s going to happen with the lines and how much work there is to do. And then it really boils down to being prepared for anything, being comfortable on the bike and feeling strong. You know when you come into this event that everything is going to be scary again, that you’re going to work your butt off building and putting a line together, and you’re going exhaust yourself. But you've got to stay strong and mentally focus. You get into the zone when you’re here too, because you are hiking around you get used to the terrain; being on the edges of cliffs and adjusting to the heat. It gets you ready for anything.

Speaking of getting used to it, with coming back to the same site as last year, does your approach differ from when it was a brand new location?

Definitely coming back here for the second year is better than that first year. Knowing that I was coming in with a line established helped a lot. Last year we found out that it is pretty limited here. The big high-scoring terrain that you want to stick to gets limited and tightens up and you’ve got to take control of the lines - having a line established really helped coming in to this year. And I knew from last year too that there were things we had to add to the existing line, so I had that to look forward to. I also had the option of changing it up if I wanted to find a different way down but already having something established, it was like, ‘okay we have a base to work off of and it works well, it’s a high scoring line that proved itself. Let’s stick to that and enhance it.’

With the politics that are going on with the limited space for lines, are you working with anybody? Are you sharing features?

Yes, again this year I am sharing the top half of my line with Brett Rheeder. We're sharing the drop in and top section and then he branches off and I continue onto a line that I shared with Brandon last year. And then I head onto the Razor Jump, which is a free-for-all. Along the way on our line other people have landings and connectors, but it’s fine because it’s not taking away from an actual feature. This sort of sharing helps them out and then their build crews go in and do work and maintenance to those sections anyway so it’s kind of beneficial for everyone.

So if you communicate well it can work?

Yes, communication is key. Just having respect for the work that’s been done and knowing that and not stepping on anyone’s toes by taking away from what they've done or the work and effort and sweat they've put into it. It’s a big investment for everyone out here. If a rider has one major feature he wants to stick to that because it's unique to his line, rather than having five guys ride it. Having multiple riders hit the same feature can dilute the effect of it, even if the other riders branch off and do different things.

Who is on your build crew this year?

This year it’s just Davie and I; it’s good, and we work well together. He loves it and he’s so happy to take in the experience, to dig, and to be here with his friends. Everyone comes together out in the desert this one time of year and he’s stoked to be a part of it.

He went to the Mountain Bike Operations program on the coast and he started helping the Coastal Crew out when we were filming Arrival. After he graduated from the programme he started working at the Coast Gravity Park when it first opened, building and doing trail maintenance. Now he’s actually working at Winter Park in Colorado on the trail crew.

You've mentioned that this is your one big competition you do a year, so how do you get prepared to ride on the scale something like Rampage?

On the coast there’s not a lot of big features, but I grew up riding big jumps and a lot of big features like are here (at Rampage). I like to ride natural features so I get excited to ride this stuff. When faced with a big jump or drop I feel a bit more comfortable, but it's always scary when you have to hit something for the first time. I do my best to judge speed from experience. The big thing that scares me the most is doing the tricks. I’ll do those every so often and try to keep freshened up, but I'm not out there doing tricks every day.

Does it take a while to get used to your big bike after riding your trail bike most of the year?

You've recently made some changes and are going in a new and different direction from the Coastal Crew and the Coast Gravity Park, why?

I found myself at a crossroads this year and I took time to figure out what I want my future to look like. I dug into my roots of what really got me inspired and excited to ride. I have a new direction and I want to pursue and really push into my individual goals and dreams I'm driven towards as a rider. It was a challenging decision to make to part ways with the Coastal Crew, but I want to explore and focus on my potential in new areas of film projects and riding.

I will always be grateful for everything we accomplished together and all the experiences we’ve shared. We did incredible things. As a group we've helped each other get to where we are and inspired many people along the way. This change doesn’t mean the inspiration stops. Nobody should expect anything less from the great work the Coastal Crew and Coast Gravity Park will continue to create in the future. There’s even more to look forward to in our different directions, and it’s all in the works.

I would like to thank my sponsors for their continued support as I pursue my goals; Specialized, Sram, Rock Shox, Oakley, Chromag, and The Chillhouse.

choppertank3e (Oct 15, 2015 at 19:17)
He called himself Norby at one stage www.youtube.com/watch?v=iUeZMGrLAhY

rickaybobbay (Oct 15, 2015 at 21:39)
So cool how the rear forks have over 8 inches of suspension travel. God that commentating hurt me deep deep inside

philipmcm (Oct 15, 2015 at 18:45)
Kyle seems like such a down to earth guy. Awesome how he recognizes that riders can benefit from each others work instead of just poaching.

BeyondBikingTeam (Oct 15, 2015 at 18:51)
I hope he remains close with the crew, I can't imagine him anywhere else. But I guess he wants to make a name for himself, like Semenuk and others rather that being part of a group. Just my opinion.

rippersub (Oct 15, 2015 at 21:47)
Sponsored by the chillhouse. A remote setup out in Indonesia. Can't help but think a shout out like that is an indication of what might be in store for "Norby"

nouser (Oct 15, 2015 at 20:32)
Either Danielle Baker doesn't know how to ask a question, or Norbs doesn't know how to give a meaningful answer. Perhaps he's running for political office and is learning how to use a lot of words without ever answering the question.