Join Pinkbike  Login
44 Comments
Red Bull Rampage - The Evolution is in the history books, but we'll all be talking about what went down for quite awhile. Cam Zink pushed the sport to new levels, Gee Atherton laid down what may be the smoothest run in Rampage history, and Darren Berrecloth cleaned one of the most technical lines ever attempted. Photographer Ian Hylands was out in the desert documenting it all and inside you can check out the results of his hard work! 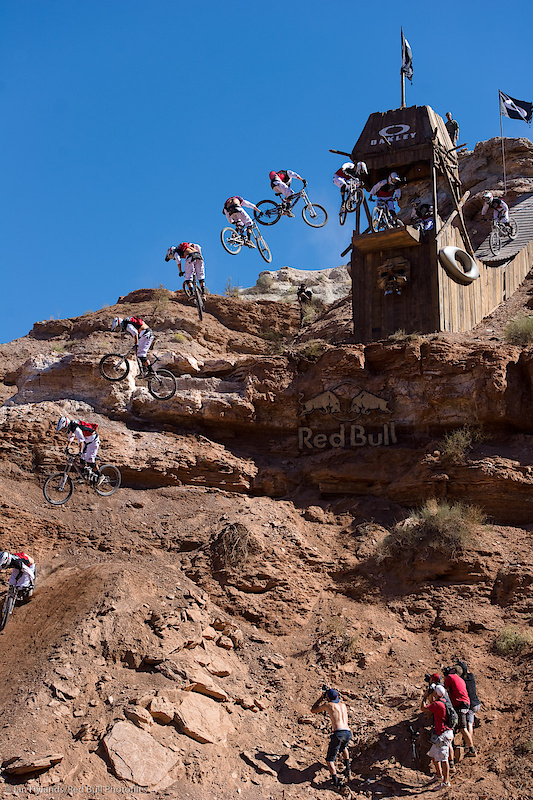 BOOM. Thanks to Zink, competitions just changed in a big way. This sequence is actually from his
first attempt that saw him land slightly crooked and get high sided down the transition when he
tried to correct it. After a long weather delay he nailed it on his second run... 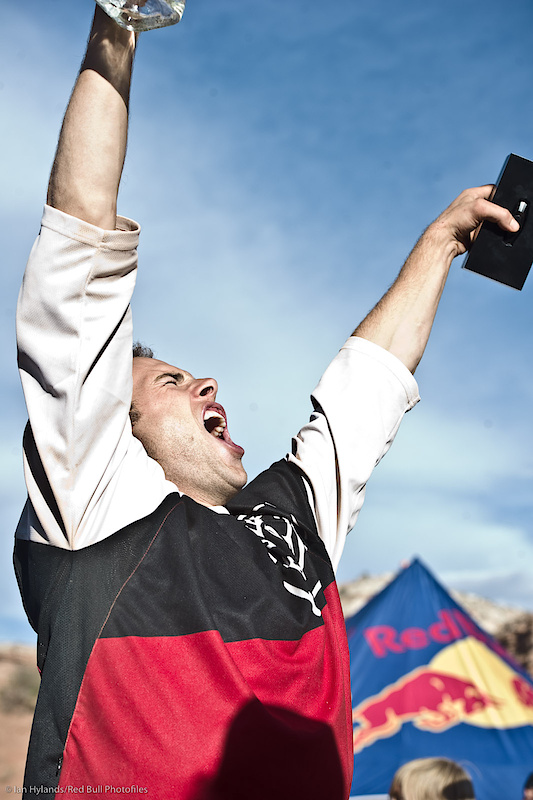 ... and was obviously pretty stoked about it and standing on the top step of the podium 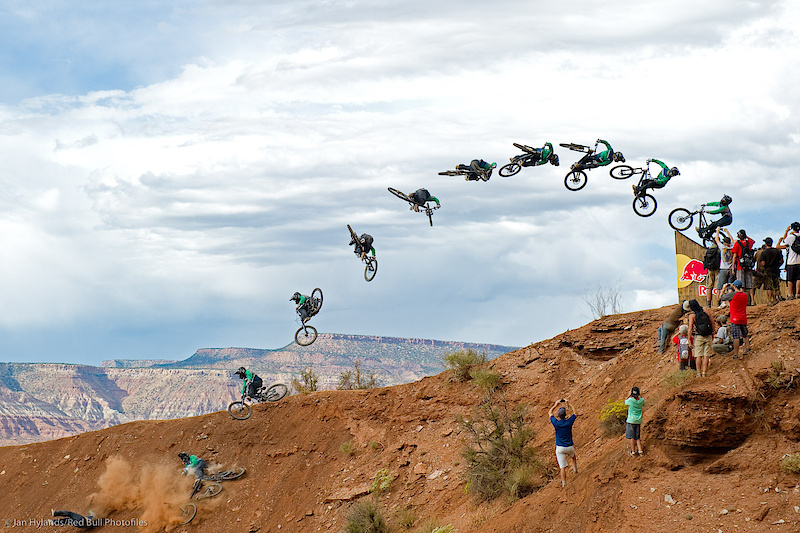 Robbie Bourdon had a bit of rough time in the finals, swapping out early in his line and then having to cross paths with some spectators, but threw down at the bottom of the course. I'm sure you've all seen his incredible flat spin in the final New Word Disorder film, but here it is out in the desert. I have no idea how he got up from this, but Robbie looked no worse for the wear while talking to Schley about his run afterwards. His shoe also went flying, of course. 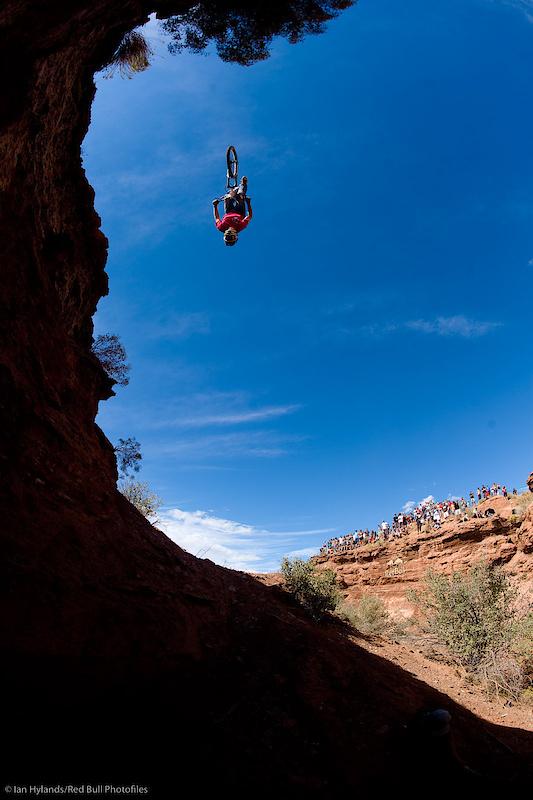 Watts is another rider who got loose early in his run, but much like Robbie, that wasn't going to
stop him from making the best of it lower on the course. BIG stepdown flip. 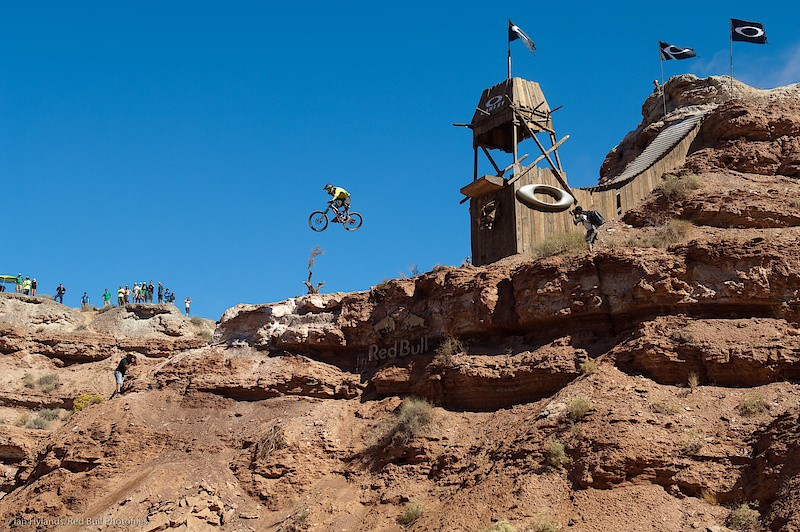 A great angle of Geoff Gulevich airing out the Oakley Icon Sender. 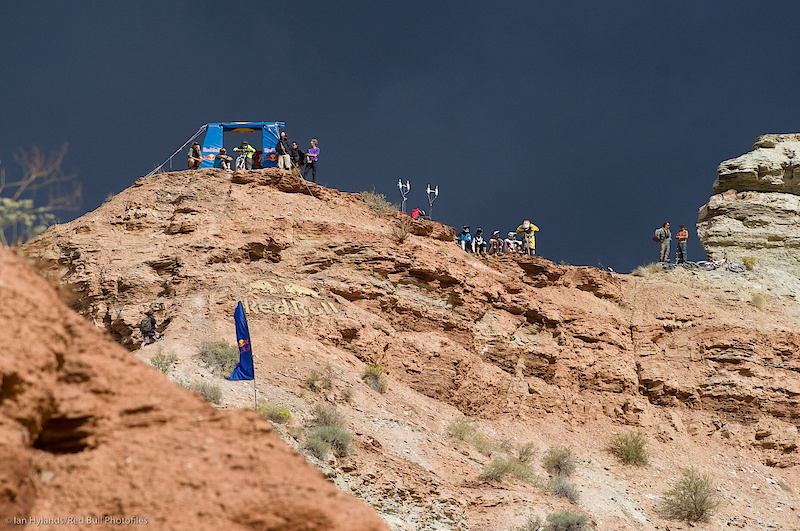 This is a serious place and not only is the terrain trying to kill you, but the weather wants your ass as well. Half way through the competition the sky filled with dark clouds and the wind picked up. It wasn't looking good, but thankfully the weather gods obliged and the remaining riders were allowed to show us what they are made of. 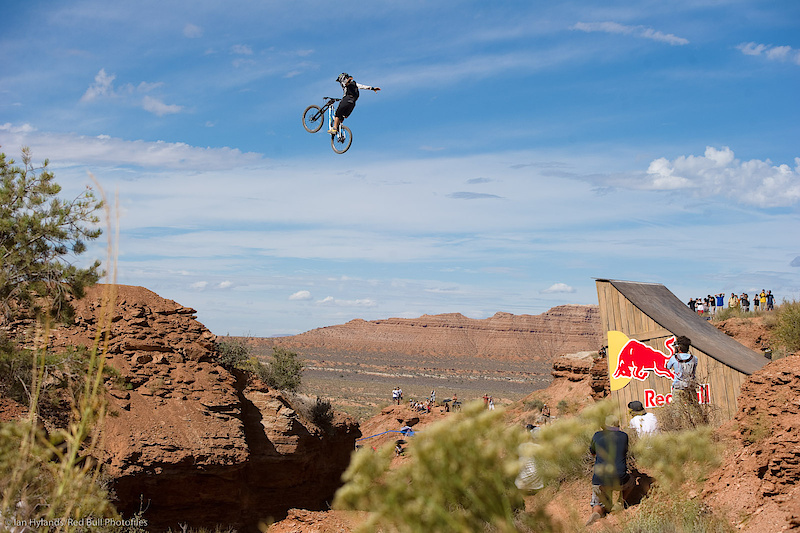 Graham Agassiz, arms out for maximum lift. The canyon gap got tweaked a bit from last Rampage with a taller landing and what looks like a slightly different lip. Some riders had it on lock down, like Aggy, but a few others got claimed. 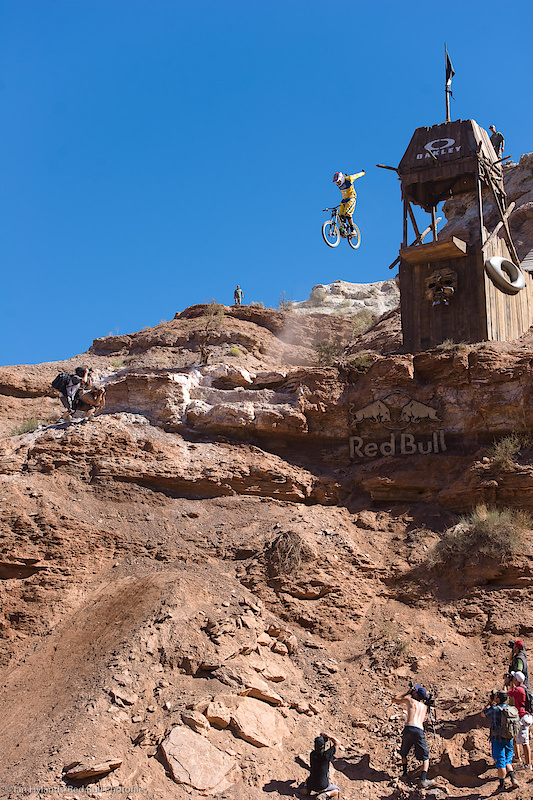 Bring back any memories? Strait with a MASSIVE suicide no-hander off the Oakley Icon Sender. 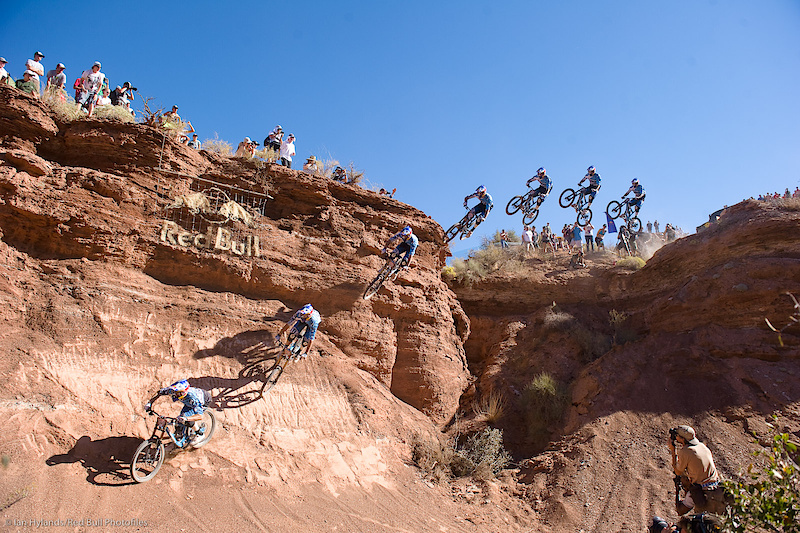 Gee ended up being the only rider to nail this massive hipped stepdown, which surely locked down 2nd place for the Brit. His run was insanely smooth and fast, that's a given, but as he rolled into this last feature he took off from a different approach than was first built. It looks like it set him up just right. 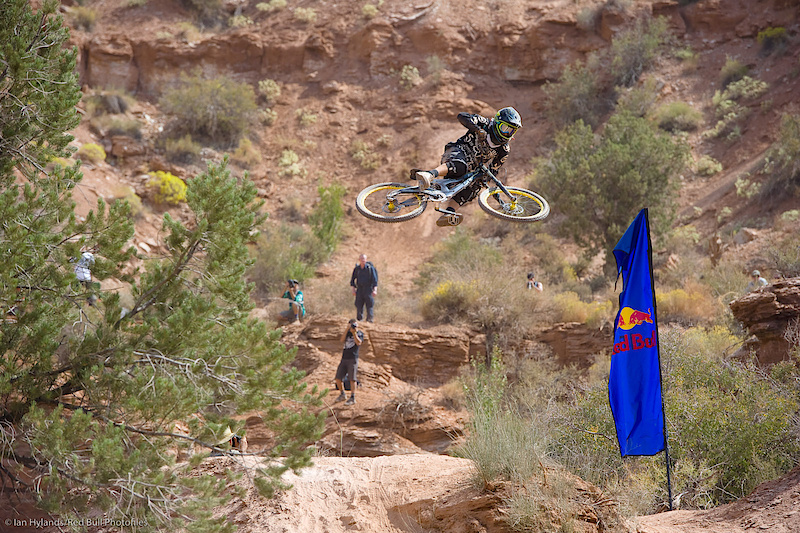 Tyler McCaul getting his braaap on! 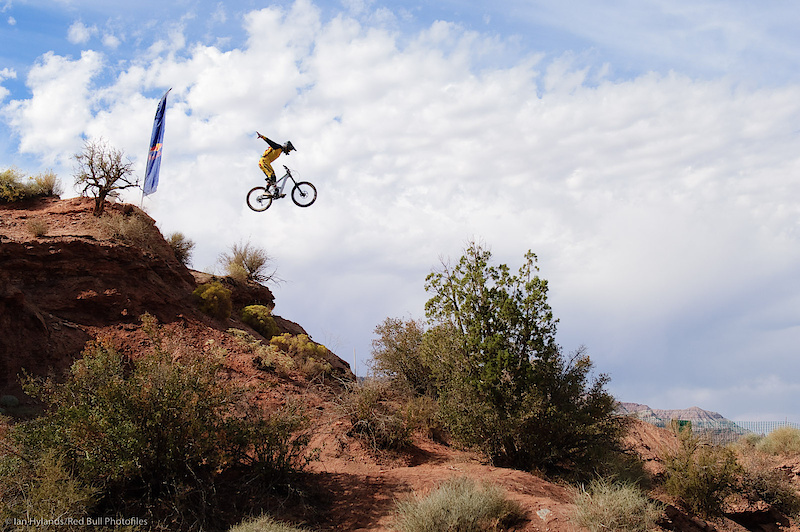 He may have had a hard crash, but Cannondale's Chris Van Dine was looking great here. 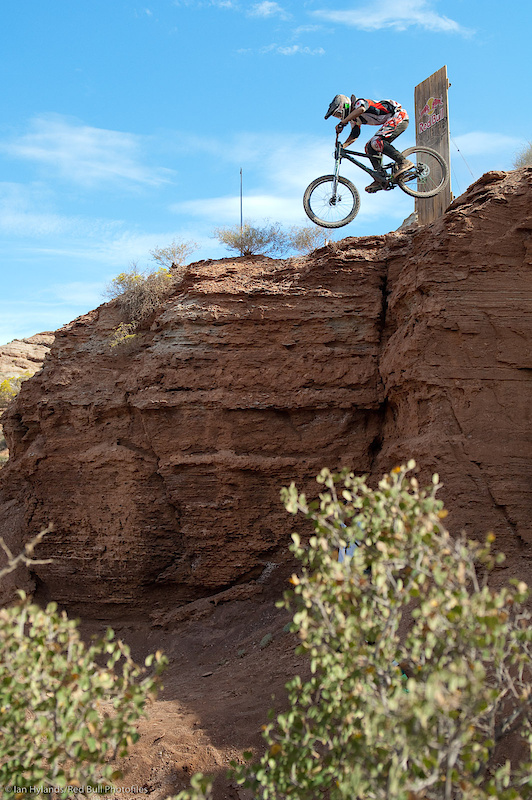 Banshee's Mike Montgomery didn't make the cut, but he looks confident in this photo from qualifying. 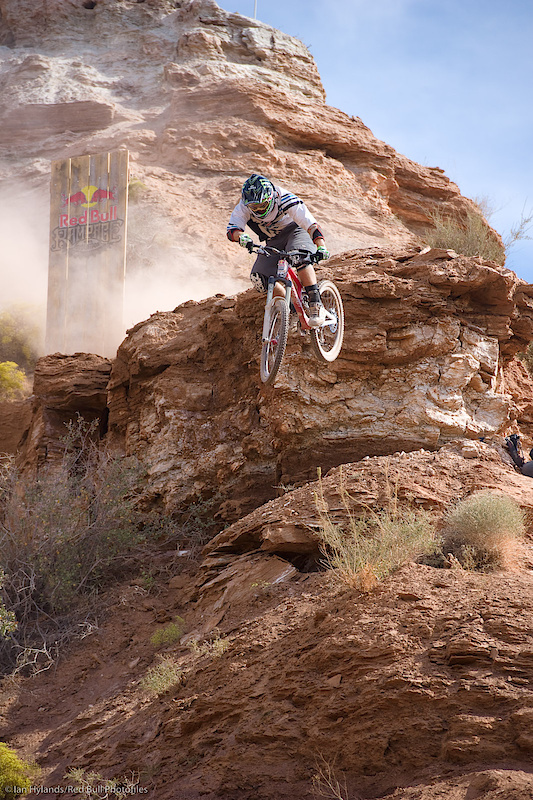 There were a few different carbon downhill bikes at Rampage. Here is Jamie Goldman on his
carbon V10 with a RockShox Totem up front during his quali run. 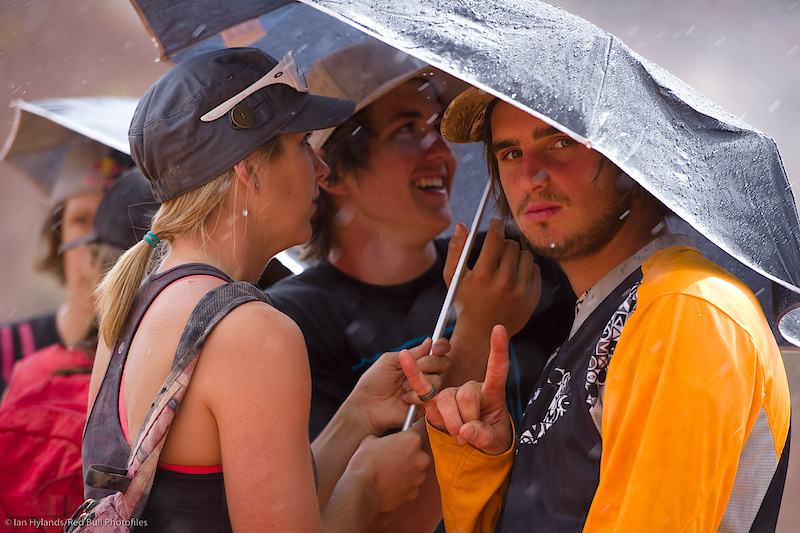 Good to see Alex Pro alive! He took a line that no one expected and dropped off the top of one of the final mesa's right into the finishing area, but didn't ride away after catching on a shelf that he didn't quite clear. The result was a big yard sale as he rag dolled to the flat bottom. These guys are tough though, he was up and looking good on his second run. 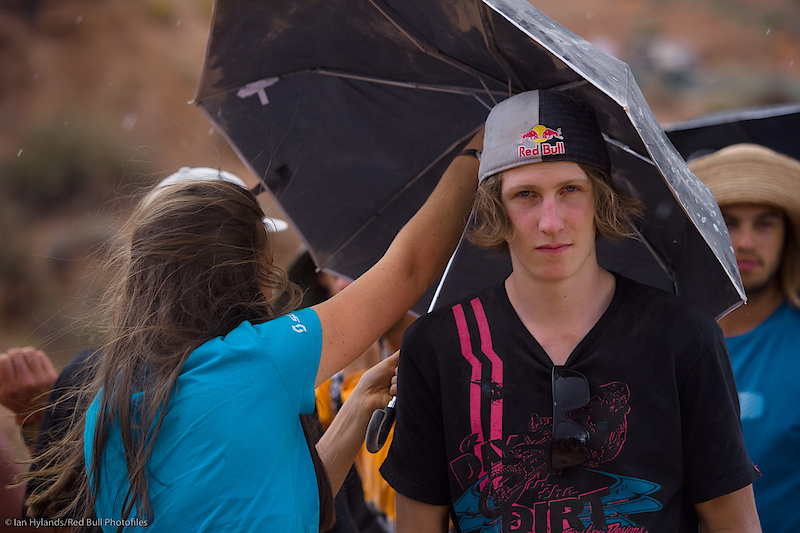 Brandon Semenuk may have been out with an injury, but he was here to support his people regardless. You know that his wheels are already turning for next year... 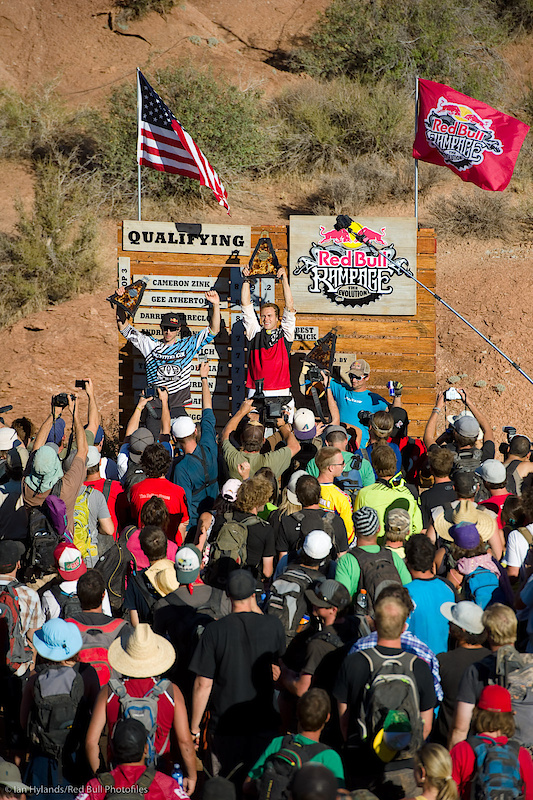 Your top three: Zink, Gee, and The Claw. While there is also a bit of controversy with
judged events, there is no doubt that these were the top three. Good work, guys!

As always, thanks for the incredible photos, Ian!
Want to see more of Ian's work? Check out his site!

northwestdhdad (Oct 4, 2010 at 14:53)
Stoked on your images Ian. Everything you shoot from ProGRT's to Redbull, your tops.

nunukula (Oct 5, 2010 at 7:02)
I see like fifteen PODs in a row ... that oaklay drop looks even bigger from this perspective, I only wish there was a onboardvideo of that drop!!

philipstonier (Oct 5, 2010 at 9:18)
zink pulling through with some big wins this year, crankworx and rampage

Atrak (Oct 5, 2010 at 10:28)
Event went down very solidly, Glad to see nobody got hurt while others went completely rowdy.

Next year: Cam Mccaul to flip the canyon gap just like in disorder O.o

lsbl (Oct 5, 2010 at 14:54)
Semenuk looked FKING pissed... He would of done something pretty insane just like Cam if they werent injured

tabletop666 (Oct 5, 2010 at 2:56)
Im prob gettin mad neg props for this, but this drop is really not that much bigger than the Crankworkx one... If that was a dirt lip, instead of wood, it would be crazy, but really its just another slopestyle like feature... I thought rampage was about the gnarly big mountain stuff? Like Claws run?

gouldyy (Oct 5, 2010 at 3:11)
I know this is controversial... Zink's 360 was big, it was f*cking huge and he only just held the landing - no doubt the best trick of the contest, but what else did he do in his run? In his own words, after landing the 360 all he did was not die! Now you look at Gee & The Claw they had consistent BIG MOUNTAIN lines all the way down...

tudorm (Oct 5, 2010 at 4:54)
berrecloth and gee had big mountain lines all over it. berrecloth had a real difficult line with a 360 drop off natural/dirt take off. gee was fast and hopping over every thing in his way. he looked like in a WC race or something and he finished with that hip/drop to quarter. nice runs by these too. zink is insane for getting the 360 done even though he crashed the first time but i think it was not enough. best trick maybe but not the rampage title!

radleyy (Oct 5, 2010 at 8:17)
but i would say the rampage is all about progression and id say if anyone zink has brought that forward... no matter what people say that drop in my opinion is still insane and worthy of the rampage and its deffinatly not slopestyle!!

phdotd (Oct 5, 2010 at 4:04)
i always thought big mountain runs were in the same league and mtb's version of extreme skiing/ snowboarding, and we don't see those guys building jumps, ramps and entries out of wood? imo it would've looked more hardcore without the sender, as big as it was, and a dirt jump before the gap, i would've given the win to Gee

phdotd (Oct 5, 2010 at 4:05)
but a big up to the whole crew who laboured away and made it what it was, very memorable, a great show of how i ride in lala dream land

heavypedalmtb (Oct 5, 2010 at 7:32)
The rampage was an epic weekend for sure! I think most of the Utah dirt is out of my nose now. Thanks to Justin from JDP for letting be your gear donkey. Congrats to all of the riders. All of the cool people we met this weekend, thanks! Van Dine, your line/trick could have been definitely Best Trick! Heal up fast man! Hylands, you definitely know your $hit!

transitionrob (Oct 5, 2010 at 8:01)
Mad props to all the riders, especially the top three. Its hard to decide who should have won. I think the claw had the best run (especially with the nac-nac sketch he pulled off), but all three represented different aspects of our sport and the decision to put the claw or zink on top is something i would not like to do as a judge. Amazing comp.and tabletop666: that drop is 50ft by 50ft thats way bigger than anything you'll find at crankworx.

ElVenezuelan (Oct 5, 2010 at 8:26)
The Best Contest Ever !!!!!!!!!!!!!!! Zink 1st - He DOES deserve this win because, he did what he said we'll do. And I was the biggest 360 ever done in Rampage History, thats How you win Rampage if know the events history maybe you will see. Rampage one Wade with the one big drop, Rampage 2 Super T with the double step down drop, Rampage 3 I think it was Cedric with the backflip, Rampage 4 Kyle with the no hander and so on. Gee 2nd - His run at the top was very big and gnarly and closing with that big move that nobody else land 2nd for sure. The Claw 3rd - Men the Claw is a Beast after almost dying at the top he puts the most technical line of the day. Congratsssss Riderrrrrsss !!!!!

IanHylands (Oct 6, 2010 at 19:47)
Thanks for the props everyone! Stoked you like the shots, Rampage is one of the hardest events to shoot, you can only really be in one place at one time and there is so much happening. This year with the weather and three different ridges to shoot it was impossible to get what I wanted of each rider, so what you see is a compromise. As the weather got bad everything sped up so we could finish making it almost impossible to get back and forth between the canyon gap and the Oakley sender, let alone any other features.

carleney (Oct 5, 2010 at 6:35)
Great event, with insane skills showen, can not believe how easy Gee made it look. Is there any chance of seeing the score cards, would make for some very interesting reading.

vt6spd (Oct 5, 2010 at 3:21)
What an awesome review. I would love to just whitness some of these big events in person. Wish Vermont would host crazy stuff like this.

thestraightline (Oct 5, 2010 at 1:03)
the no hander shot off the icon sender looks ridiculous. Really shows the height of that thing!

fullbug (Oct 5, 2010 at 8:00)
NBC Sports is supposedly gonna air something in November but I doubt it'll be any better or more coverage than we've already seen here...atleast til the 3D footage Red Bull was filming comes out.

nightmareterror (Oct 5, 2010 at 7:53)
I would die extremely happy knowing I came out of the Red Bull Rampage with a trophy. Great work guys!!!