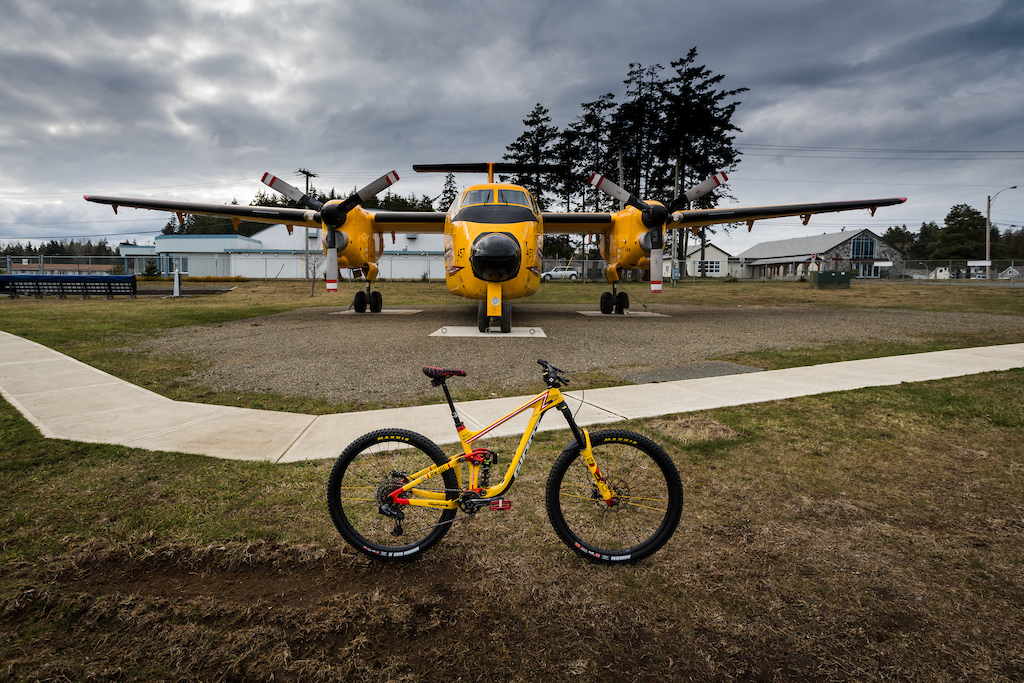 Reece Wallace was recently inspired by Canada's Search & Rescue fleet to paint his new 2021 Giant Reign Advanced Pro 29. Reece modelled the bike after the de Havilland DHC-5 Buffalo airplane. The plane has been a staple in Canada's Search & Rescue efforts for decades, and as the plane is slowly being retired, Reece thought it would be a suiting tribute to pay homage to the plane and crews for their years of service. 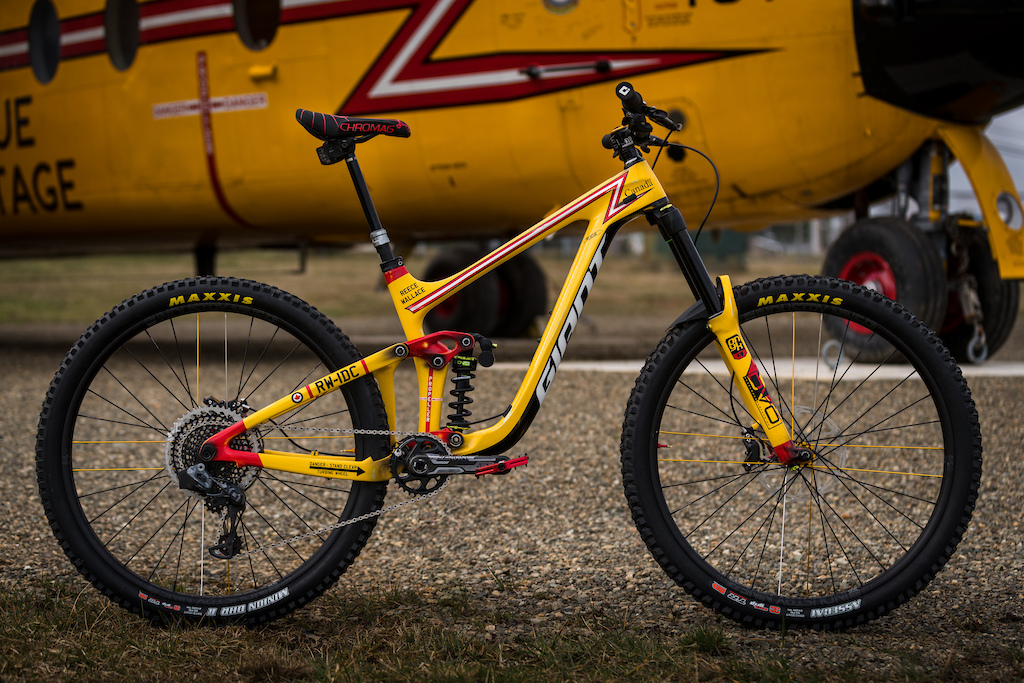 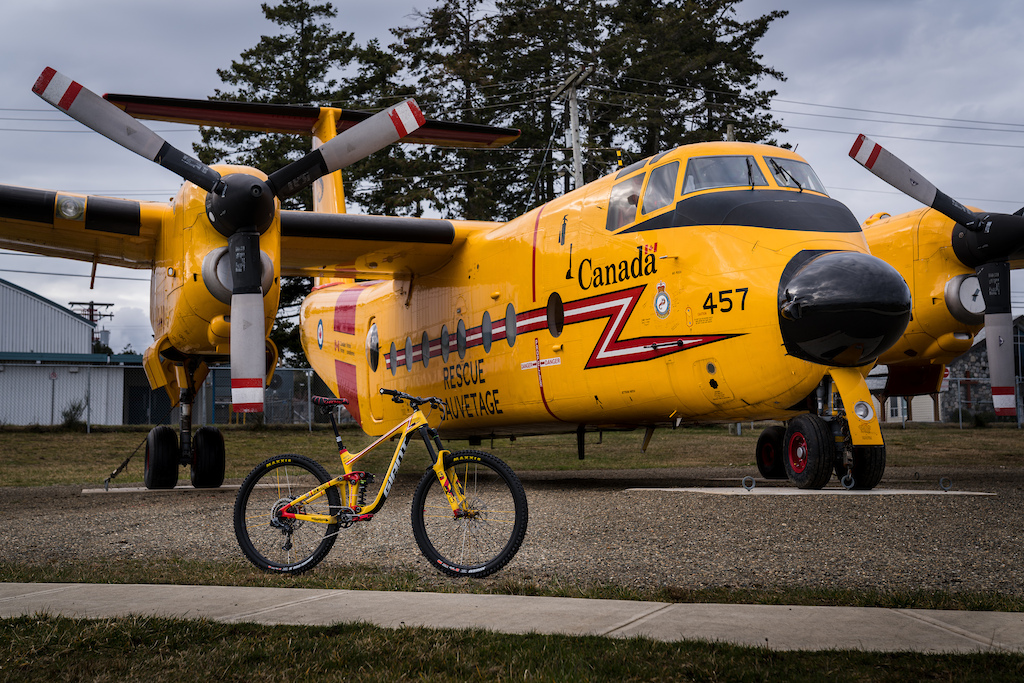 Though the Reign is 50 years newer than the Buffalo, they're both built for flying and share the same stripes 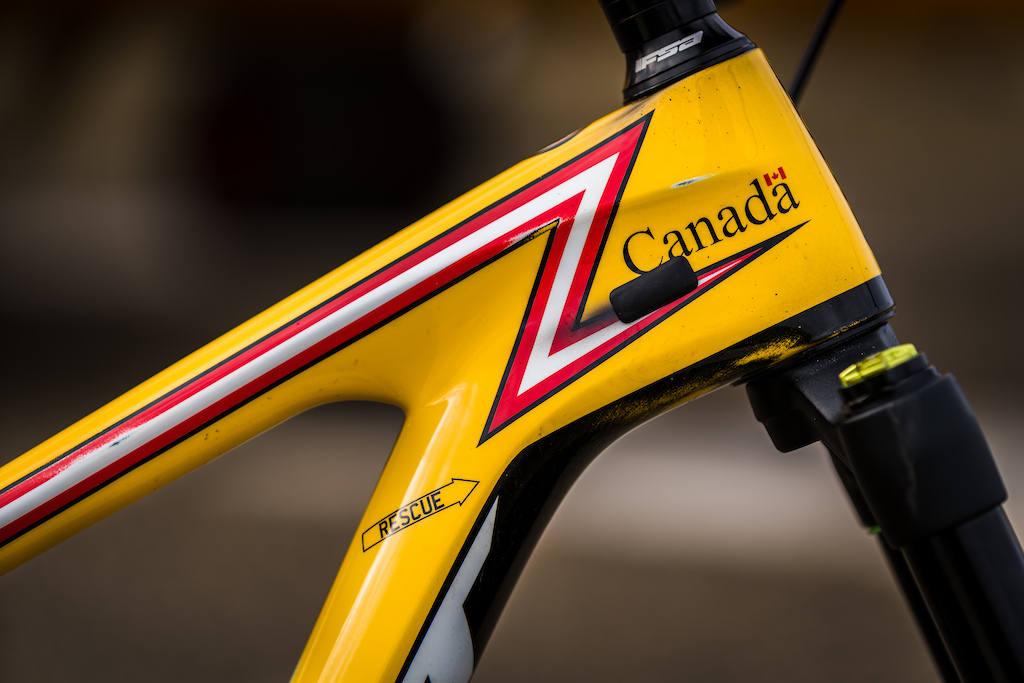 Carbon build up from exhaust - these are work horses 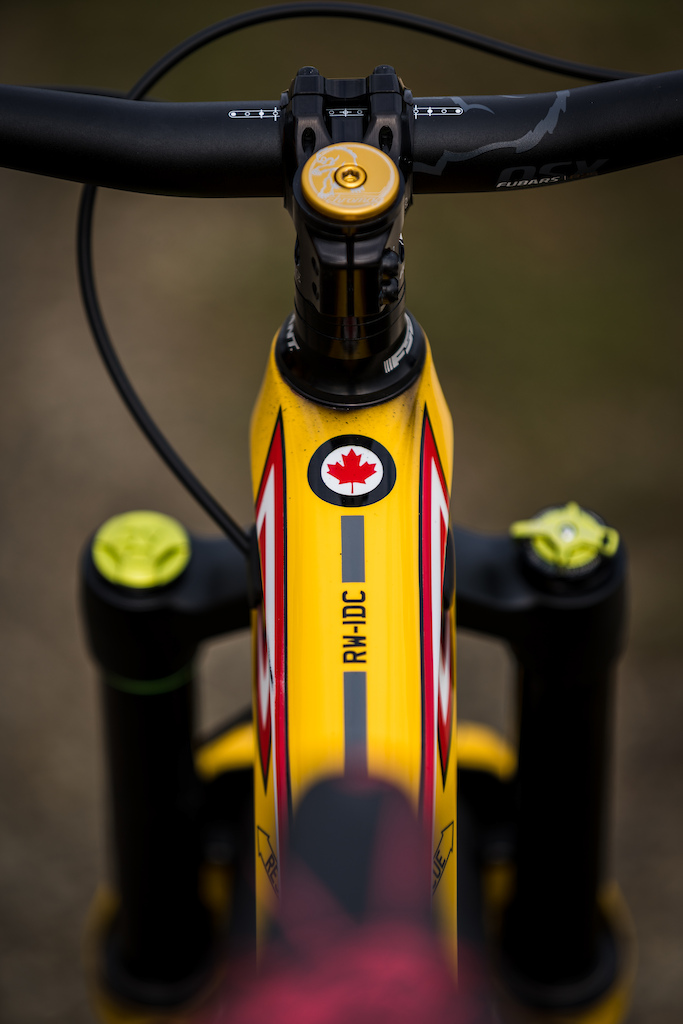 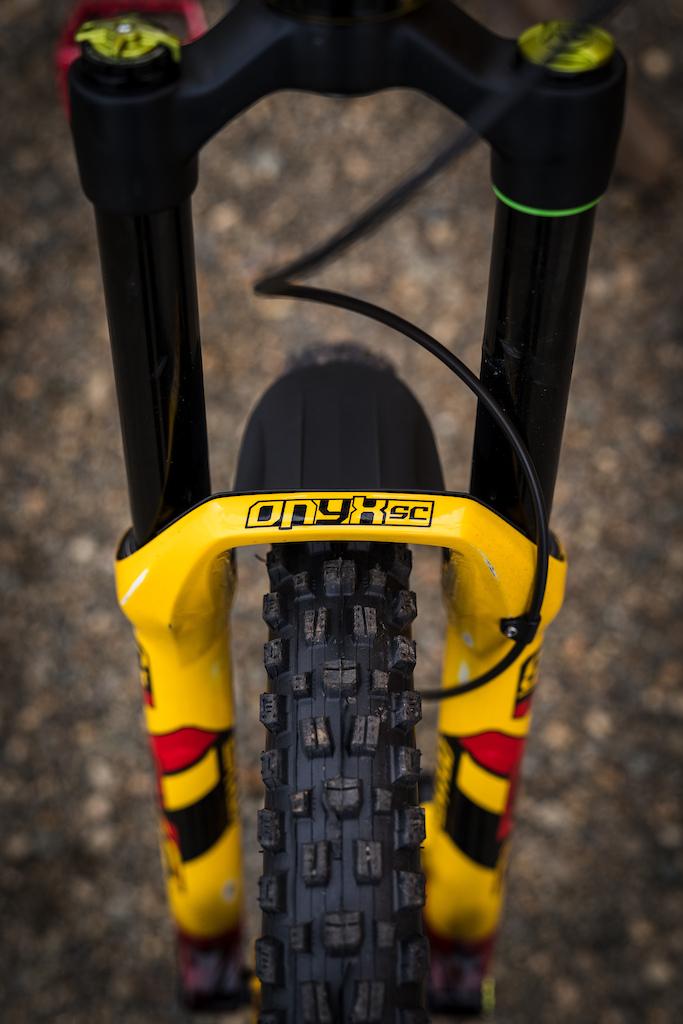 Royal Canadian Air Force meets mountain bike
Like many people know, Reece has an affinity for aviation and wanted to pay homage to the amazing work Canada's modest, yet instrumental air force have done 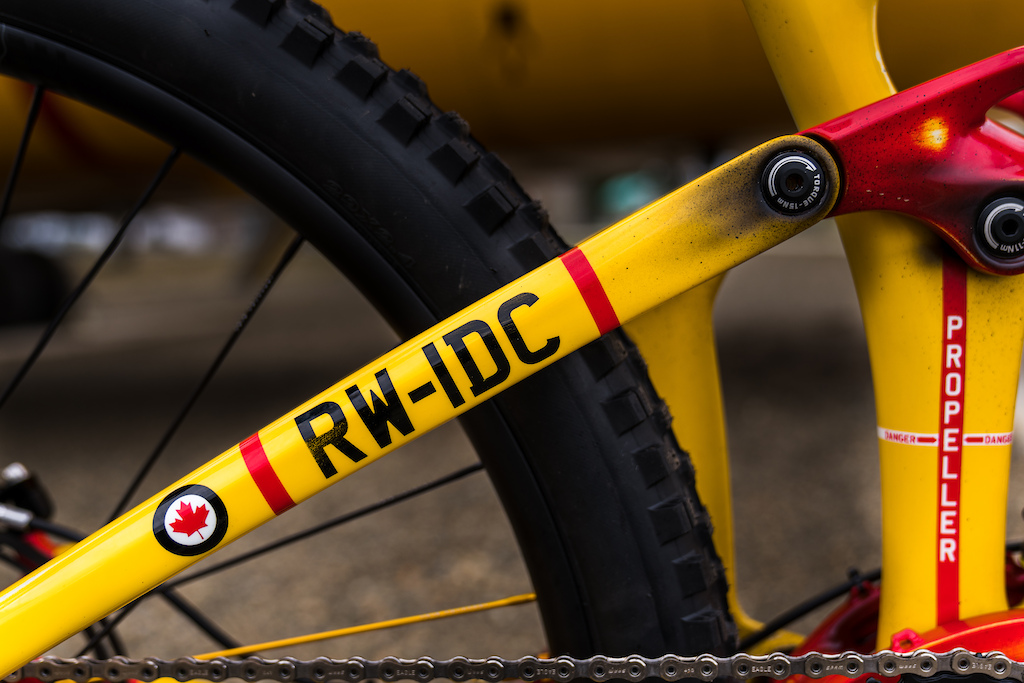 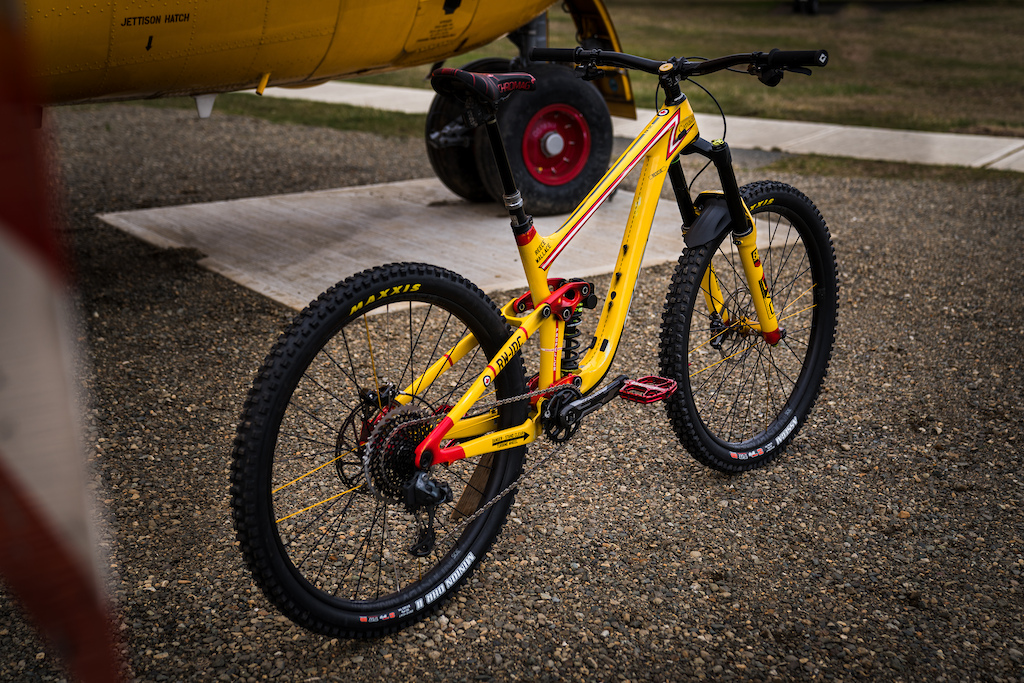 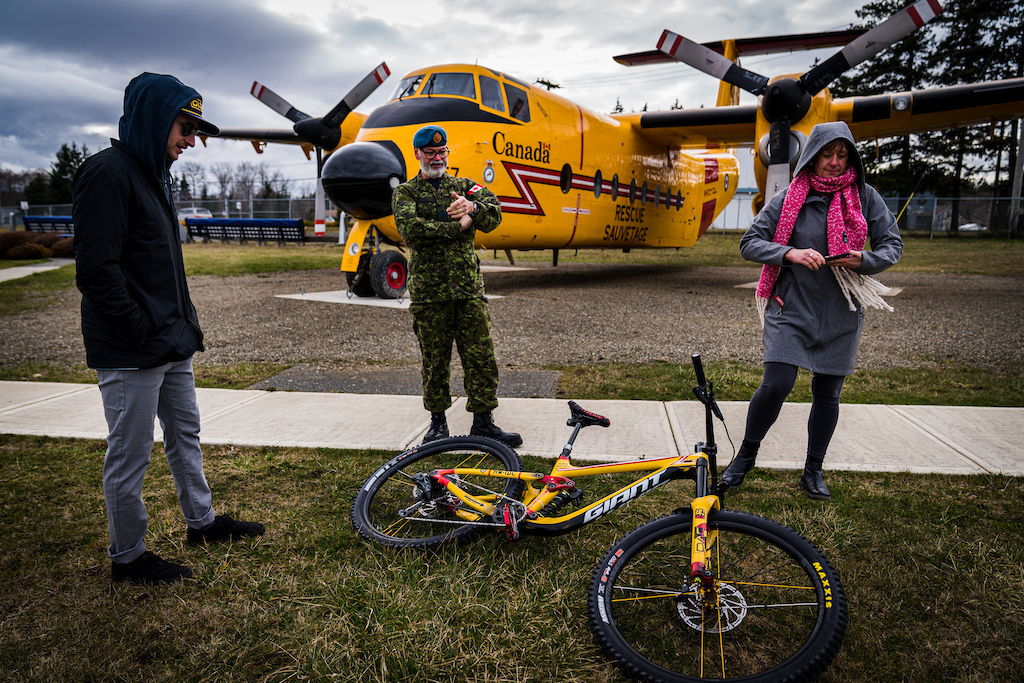 A sergeant from the armed forces and one of their PR personnel. Nerding out about bikes and planes 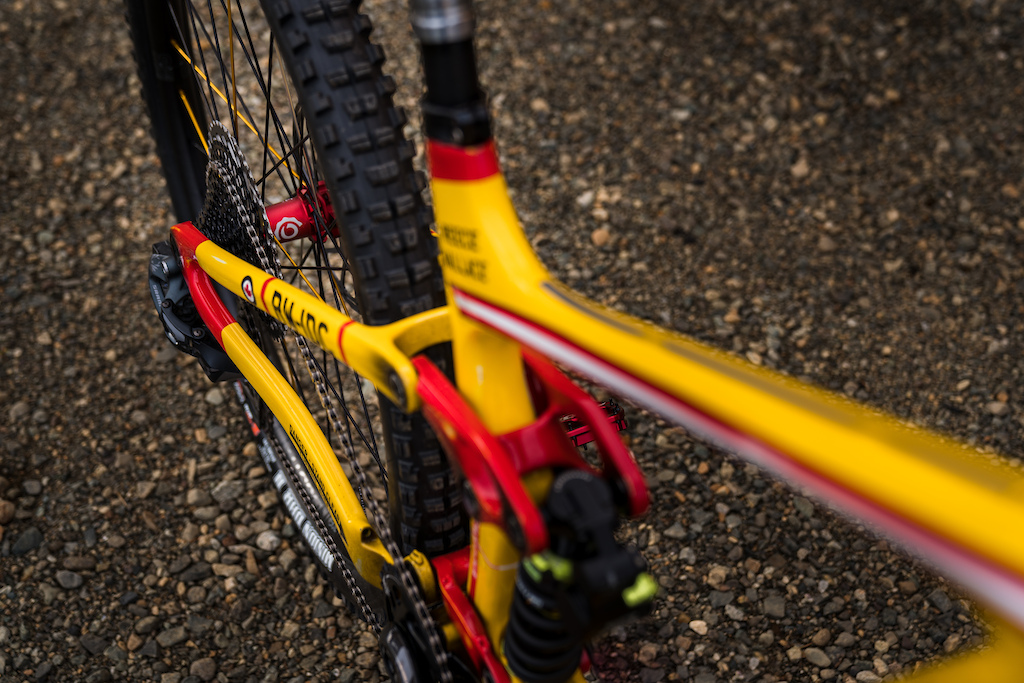 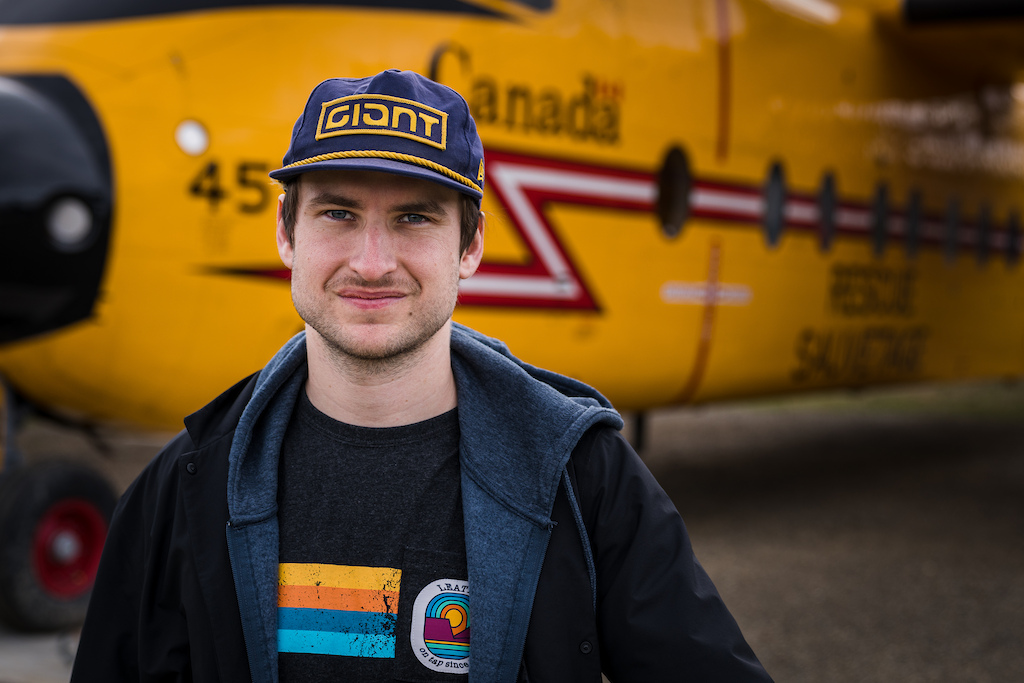 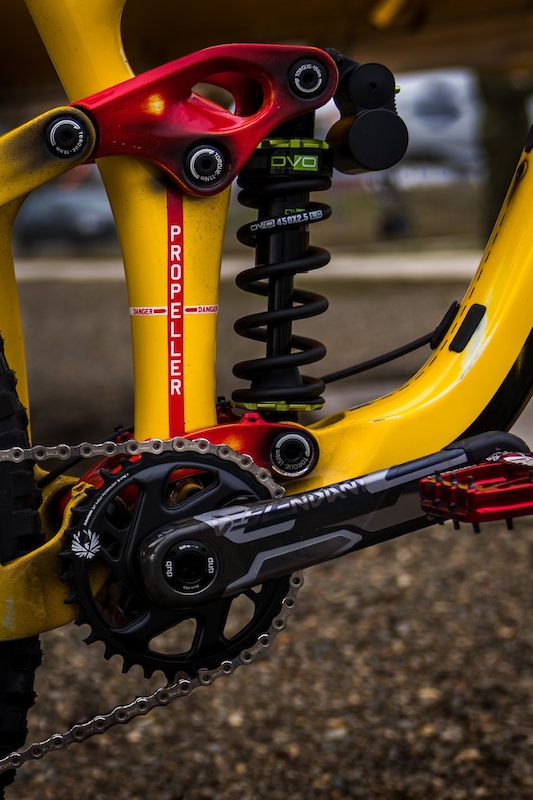 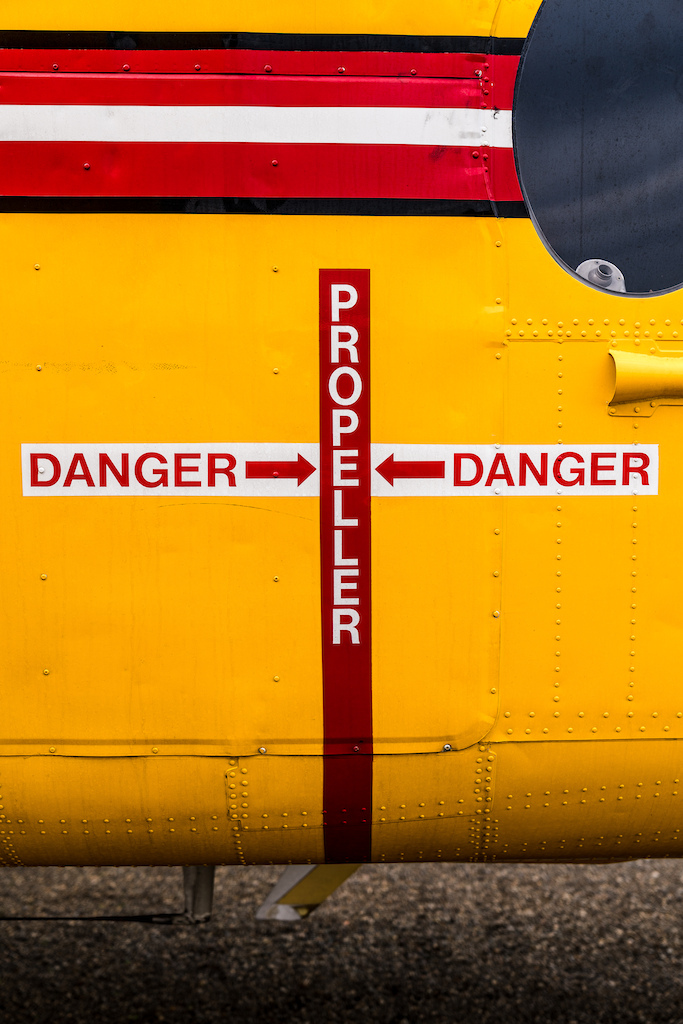 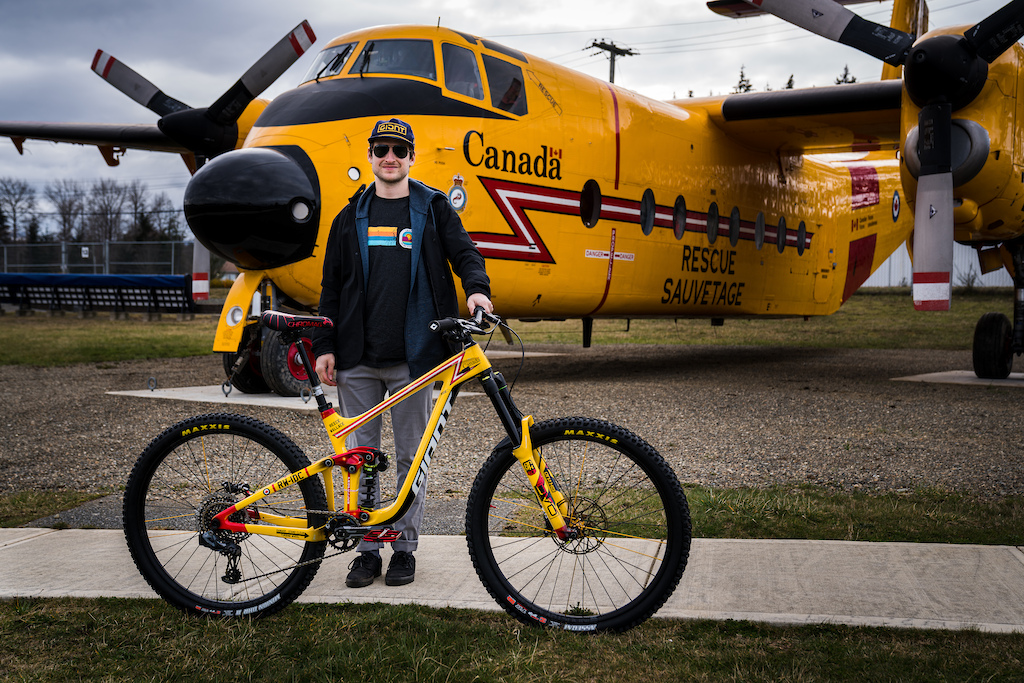 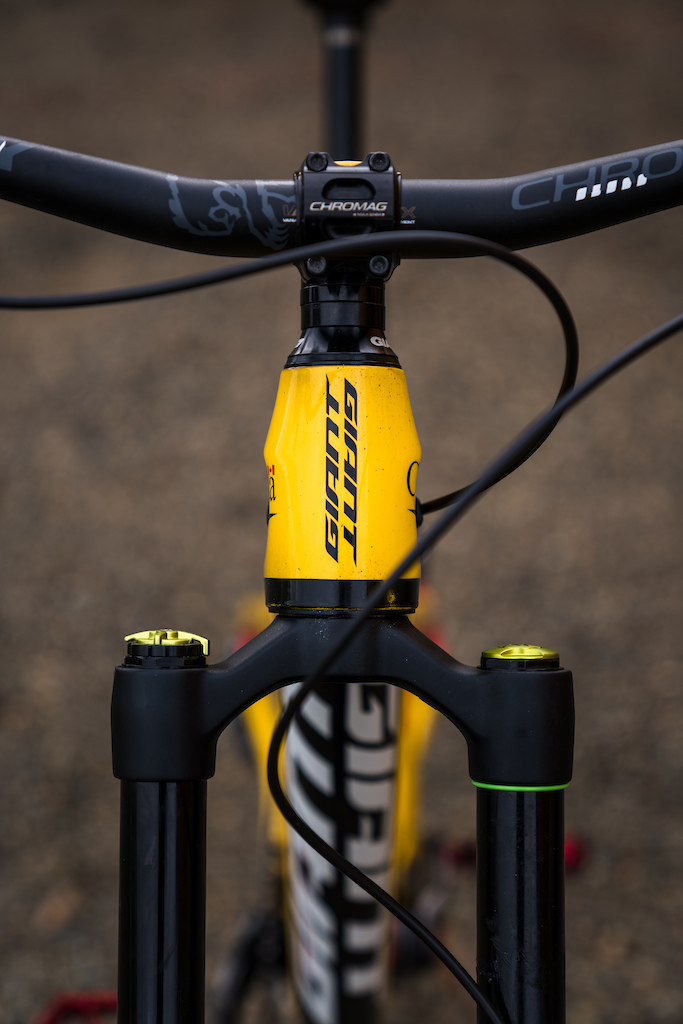 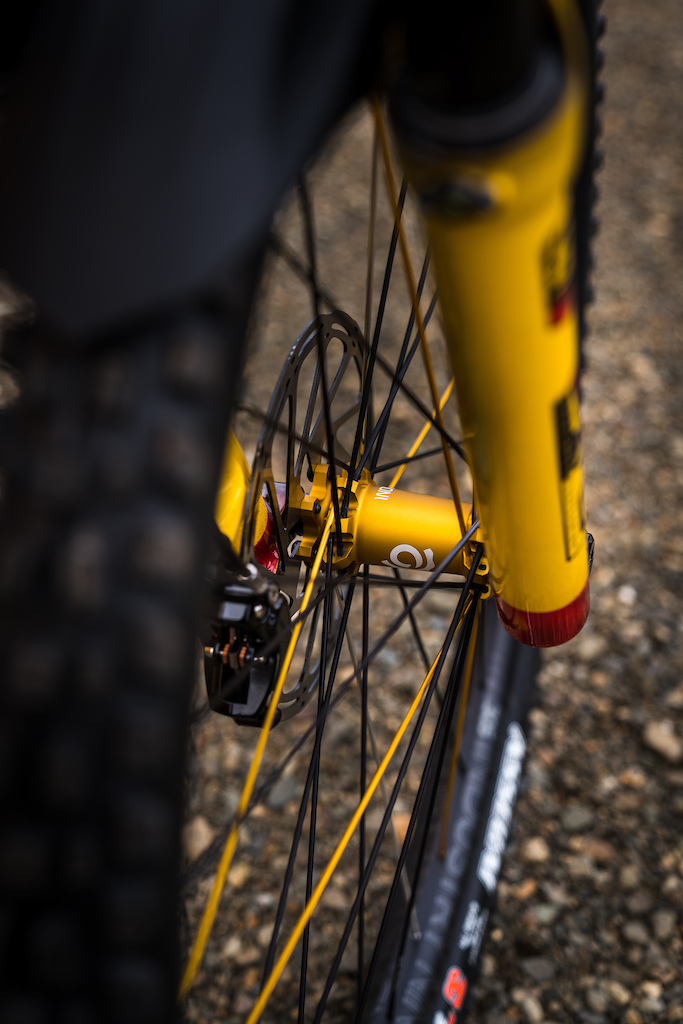 All in the details - matte gold Industry Nine hubs to match 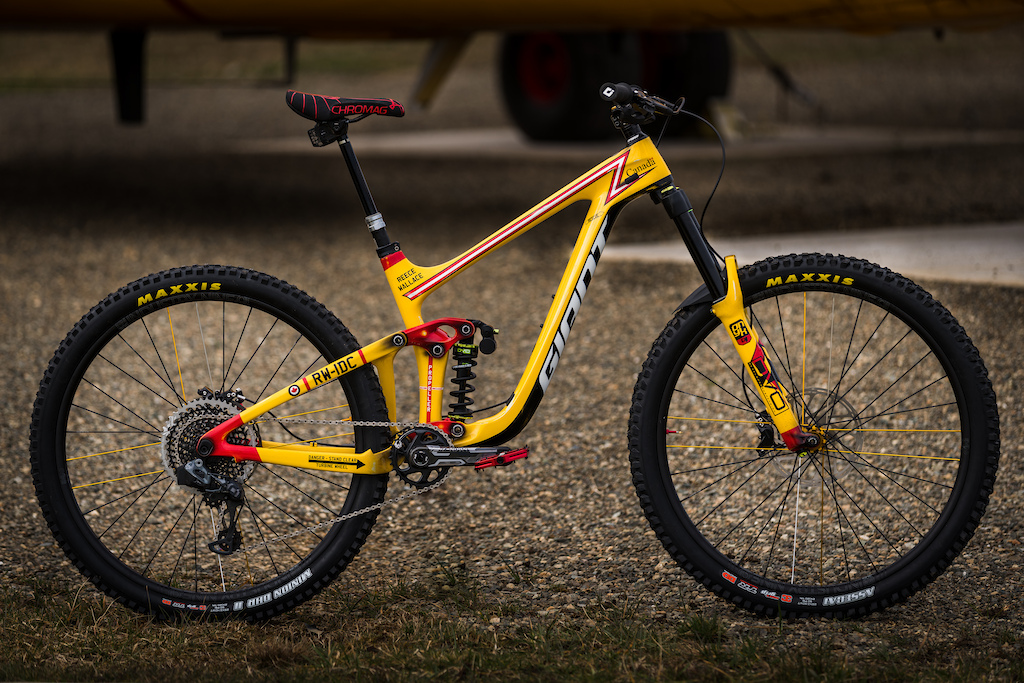 fasian (Mar 9, 2021 at 9:16) (Below Threshold)
Reece Wallace and Reece Wilson are two different gents. Both worthy of custom paint.

Bomadics (Mar 9, 2021 at 13:34) (Below Threshold)
Wow, massive down votes for the two guys who pointed out the truth, sorta sums up world politics lately.

sjma (Mar 9, 2021 at 9:11)
That's one of the coolest ideas for a paint job I've heard of and the execution is even better than I could have dreamed up. It's not beautiful, but it is so well-executed that it has a utilitarian appeal, and the wear and tear details are so well done, it makes it look like an old, trusty tool, just like the SAR planes. Awesome job!

rexluthor (Mar 9, 2021 at 11:11)
@jaycubzz: I wouldn't call the S&R painted Buffalo beautiful, but beauty is in the eye of the beholder. I think sjma summed it up nicely (although I would go so far as to say it is the coolest paint job I've ever seen on a mtn bike.)

sjma (Mar 9, 2021 at 12:32)
@jaycubzz: my wording might have been sloppy. The craftsmanship is top notch and the execution of the idea seems nigh on perfect - but it’s not classically beautiful.

To anthropomorphize, it’s a masculine shape and artwork applied with significant (though intentional) flaws due to use - battle scars, if you will. These aren’t typically seen as beautiful, but they tell a hell of a story and prove that someone has been tested under extreme circumstances.

Kintsugi somewhat takes the thought of damage & repair = beauty into physical form, although that typically uses goooooold, and since this bike has DVO suspension, we can’t do that here

jaycubzz (Mar 9, 2021 at 14:34)
@sjma: ah like, the difference between a pristine aston martin vanquish and an aston martin DBR9 still wearing its gulf livery and battle wounds from the 24hr of le mans. Both beautiful, but in different ways.

Jordansemailaddress (Mar 9, 2021 at 9:24)
Great work! You really nailed it! That bike looks cooler and cooler the more I look at the pics of it and the plane!

jaymztrigga (Mar 9, 2021 at 9:30)
By far the coolest tribute bike I've seen. As someone who serves in our Forces Im positive that's highly appreciated throughout. Good on ya Reece!

ShawMac (Mar 9, 2021 at 9:46)
Make sure you let us at the flying club know when you bring it to Squamish. Lots of the mtb/aviation nerds are going to want to check it out!

There will never be another aircraft as awesome as the Buffalo in my opinion.

karl-huckingbikes (Mar 9, 2021 at 9:07)
Thats an epic bike i love the search and rescue theme id be proud to be rescued by that bike

TotalAmateur (Mar 9, 2021 at 9:09)
This. If you're going to flash a bike in my face that I'll never be able to afford, at least make it a bitching design or some awesome custom build. Also, never new how rad search and rescue planes were!

Danzzz88 (Mar 9, 2021 at 11:57)
How dare he copy the Ohlins yellow I also did to paint my ZEB lowers... To be honest though love the yellow bits on my bike, lools better and less cheap than fluorescent orange that was all the craze back when I had that on my SB6. Thank god no manufacturers have cottoned on etc Ohlins with the limited edition fork, I like my colourway and how not many people have it.

RobbyRideGuide (Mar 9, 2021 at 14:39)
My Pa flew with SAR 442 Sqn and ran the RCC for western Canada.
I immediately sent this article to him.
“Mountain biking? Never heard of it.” Said my moto riding Father.

Sweetpotato999 (Mar 9, 2021 at 17:40)
That is a sick theme. I originally imagined it as powerslave Aces High theme when i saw the insta clips with yellow. This is cooler.
I had the idea for a powerslave theme on my maiden where its a sand color and pyramid-brick pattern on the bottom tube and rear triangle, with hieroglyphics on the rear triangle tubes. Top tube sky blue with small white bird shapes. At the head tube is the pyramid tip just like it looks on the album cover. Rocky logo in it’s usual place in standard blue lettering outlined in yellow.

arwilso4 (Mar 9, 2021 at 20:58)
All that work and they couldn't swap out the DVO green for some red anno to match the Plane... I am a huge fan of DVO, but to do all this work and not swap out the green anno and sag indicator rings seems like a miss to me. Just my 2cents (the cost of a red o-ring). PS everything else executed perfectly

WalrusRider (Mar 9, 2021 at 9:18)
my loins are frothing uncontrollably at the sight of this

trailsmurf (Mar 9, 2021 at 9:55)
LOVE THIS. In my MTB dream world these custom themed models are standard. I want bikes that look like a hot wheels...this "high-end", luxury, toned down era needs to end.

prezes1984 (Mar 9, 2021 at 11:48)
finally someone understands what custom paint job is, finally forks painted to match the frame

kmsafety (Mar 9, 2021 at 19:42)
Why doesn’t Giant spec their bikes with DVO suspension? Every now and then I see a Giant sponsored enduro racer spec the bike with DVO.

cyclomike (Mar 9, 2021 at 15:36)
Yay, I always look forward to seeing that plane fly overhead while I’m out in the beautiful Comox Valley! Nice tribute!