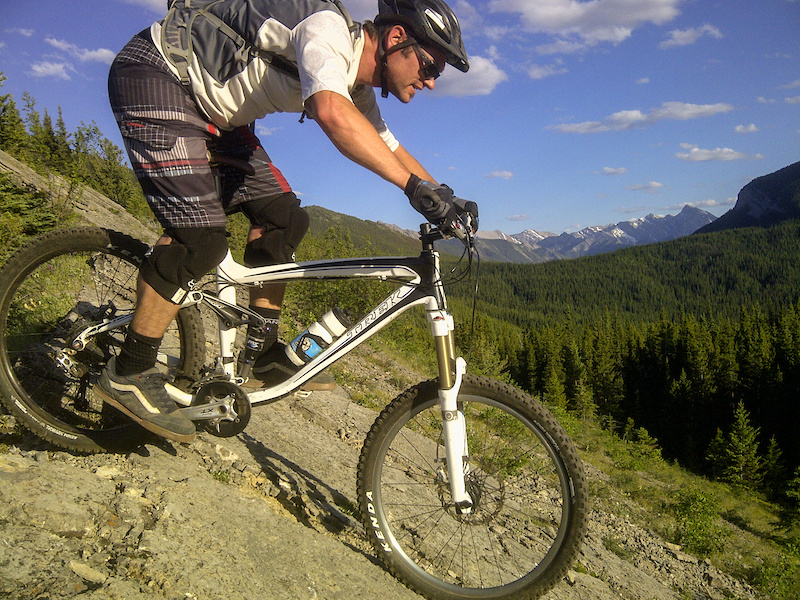 Blue rides Razor's Edge while the trail was still in development. The Prospector and Razor's Edge were both big additions to the Rockies riding scene.

If you've ever twisted up its narrow last switchbacks or carved a hard rock turn on Alberta's Prospector trail, you know our friend Blue Falconer. He's the trail's builder. He's the trail's spirit whose signature flows through every turn. Blue Sky Falconer, lover of dirt, mountain bike visionary and industrious trail builder, rode into the eternal singletrack on Wednesday July 27th after a short and intense battle with cancer. With his passing, the Canadian Rockies mountain bike community, and all mountain bikers, lost a great friend, dreamer and mountain bike advocate.

Since building the Prospector trail, it has become a favourite stop for all mountain bikers riding in the Bow Valley. And if you ever met Blue, you loved the Propsector even more. His smile and falsetto laughter coupled with his deep passion for riding were infectious. He made you proud to ride his creation, made you feel part of it. And in fact you were. His was a trail for the people, built humbly whenever he had a spare moment between raising four active kids in Exshaw with his wife, Deb.

Even though Blue marched to the beat of his own drum (he probably built that himself too), he loved the power within people and had the ability to make genuine connections with people to create community willingly to help bring his visions to life. He could get you building some sweet berms on his trail in the morning and by afternoon you were helping him jump start an old school bus so he could park it on an empty lot in downtown Canmore to serve ice cream out of. Like the Prospector, the Old School Ice Cream Bus has become a fixture in the Bow Valley. Every hot summer day since he parked the ol' jalopy on Main Street in Canmore there’s been a lineup of kids and adults waiting to get their ice cream fix.

Getting a double scoop of Tiger Tail into the hands of a 10-year old was as important to him as his mountain biking. He loved all kinds of riding and wasn't even afraid of dusting it up in a race or two. Blue's style was to enter XC races and ride his fully-rigid-29’er-hardtail-singlespeed wearing baggie Dickies shorts just to show the boys that you don’t need lycra and expensive stuff to go fast. 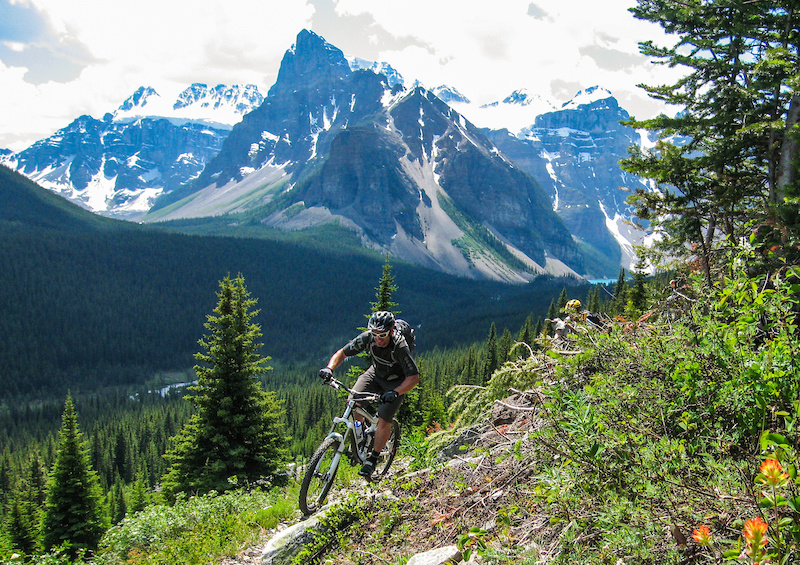 Blue in his element: singletrack and spectacular scenery on the Highline above Moraine Lake, Alberta.

He wanted to see a thriving and friendly mountain bike community in the Bow Valley and since he didn't like elitism or exclusivity, he managed to get EVERYONE involved with raising the collective bar. Blue ran his own grass-roots race on the Prospector trail for several years. The 'Paper Plate Race' started in front of his house in Exshaw. The idea was to zip tie a paper plate with a number on it to your handlebars and get one of his kids to start racers on a couple lung-busting laps of the Prospector. Not without its chaos, courses usually included some nebulous new singletrack with dubious instructions ("come on guys it'll be really fun"). Somehow we all found the finish line, which was his backyard where he hosted a barbecue on the very plate that was your once dusty number shield.

Blue’s love for biking was only overshadowed by his love for his family. His passion for family, adventure, and living to the fullest will be remembered forever. And although Blue’s passing leaves our forested trails feeling emptier, generations will live to enjoy what his passion created in his short years. To ride the Prospector is to know Blue, so remember when you crest the top and begin to take that giggling plunge towards the bottom you "Ride For Blue".

A fundraising site was set up for Blue during his cancer treatment and will continue to stay up to support his young family.

A T shirt fundraiser is also underway. All of the proceeds from these shirts will go to the Falconer family. www.rideforblue.com 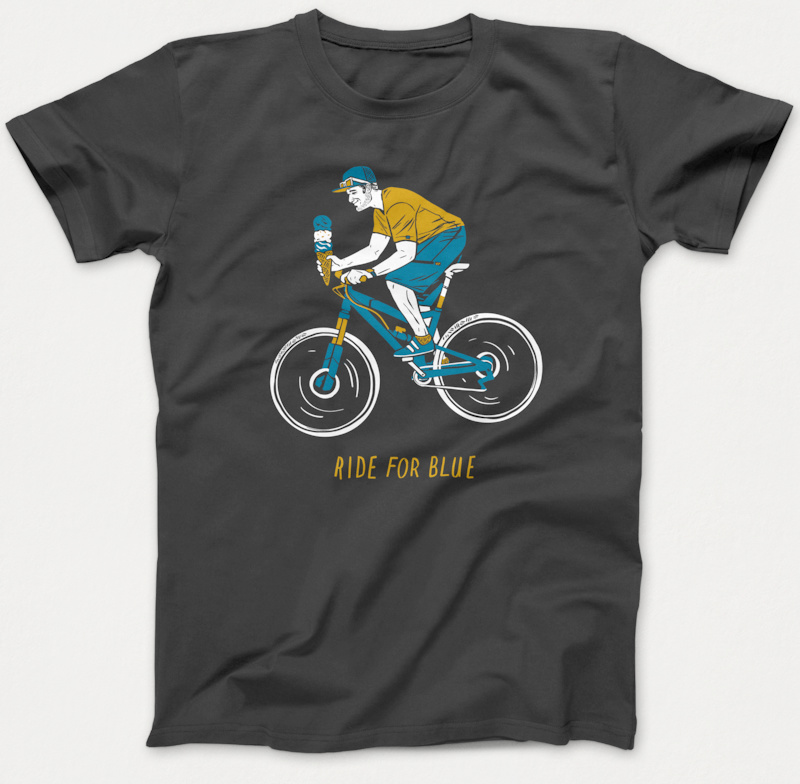 The Ride For Blue T shirt is available for $25 as a fundraiser for the family of Blue Falconer. Available online at rideforblue.com

kurmo (Aug 3, 2016 at 8:05)
Blue was a great man. Prospector is my absolute favourite trail in the bow valley. I'm proud to say I met Blue and help do a little trail maintenance while living in exshaw. Prospector ended in my Backyard and listening to all cheers and excitement coming down should continue to make Blue smile. Ride in peace.

Golden-G (Aug 3, 2016 at 18:25)
I have lived in Whistler and Golden for many years in both locales. I've ridden many of the beat trails in BC. Razors Edge is one of the best trails anywhere! As a resident of Calgary, Razors is a gift that just keeps on giving! Thanks Blue!

calebcrawley (Aug 3, 2016 at 4:46)
Blue touched many lives including my own, not only in the mountain biking community, but everywhere he went. He will be greatly missed.

jaydubmah (Aug 4, 2016 at 11:46)
Was on Prospector the other day and I still marvel at how well designed it is. Blue had vision! Thank you. If you're ever in Canmore and looking for ice-cream, skip all those fancy-schmancy store-fronts and go to the original Ice Cream Bus. Support Blue's family!

Gasket-Jeff (Aug 3, 2016 at 17:57)
Prospecotors is my favorite pedal trail ever. I am grateful to Blue for this and wish I had met him. I heard about Blue's condition and have been riding prospectors a lot this year. Thank very much Blue.

makudad (Aug 3, 2016 at 19:54)
I'm pretty new to the Alberta scene, so while I've ridden Prospectors and Razors (and loved em), this is the first I've heard about Blue. He will certainly be in my thoughts the next time I ride. Thank you Blue.

dmadness (Aug 3, 2016 at 22:53)
I was shocked to hear he had passed. I knew he love that trail and put a lot of himself into it, being maticulous about making it right, Prospector is a gem of a trail and Blue Falconer will be remembered and missed.

Parabellum (Aug 4, 2016 at 7:42)
Never met Blue but I've ridden Prospector more than a few times (and left lots of skin and one collarbone up there) and if the trail is, as they say, a reflection of the builder then Blue was a damn fine individual indeed. I'm sure whatever condolences I can offer must ring hollow during this time of grief for his family and friends, but none the less I am grateful for Blue and his contribution to our sport and the local riding community. Thanks Blue. Godspeed, brother.

acdownhill (Aug 4, 2016 at 9:53)
great write up, I never met blue but I feel like you could get an idea of the man he was whenever you rode Prospectors, and what a great trail that is!! we have far too few people out there as dedicated as he was at getting other people stoked, and his legacy will live on. wish I could have made it to the memorial ride, would have been awesome to hear stories about a local legend. We need to do our part now and keep this trail and traditions alive! maybe someone can get the ball rolling on a paper plate race this season in memory!

racerfacer (Aug 4, 2016 at 7:02)
Great trail, great builder. I never got to ride it as often as I would have liked but it was always awesome to see a new improvement to the trail every time I rode it.

L337Bikes (Aug 4, 2016 at 7:39)
Unfortunate to hear of Blue's passing. Prospector is without a doubt one of the best rides in the area. Our thoughts are with his family & friends.

flightsolutions (Aug 4, 2016 at 16:22)
Prospector was one of the first trails I rode when I got into mountain biking. Although I never met Blue, he must have been a rad dude if he built such an awesome trail.

conv3rt (Aug 6, 2016 at 20:54)
Nice words Christian. Sounds like his spirit will live on in excellent trail legacy. I wish I could have met him. Ride in peace, Blue.

Ducimus (Aug 4, 2016 at 15:31)
Prospector needs some TLC on some of the TTF's. Something should be organized this summer to bring it back up.