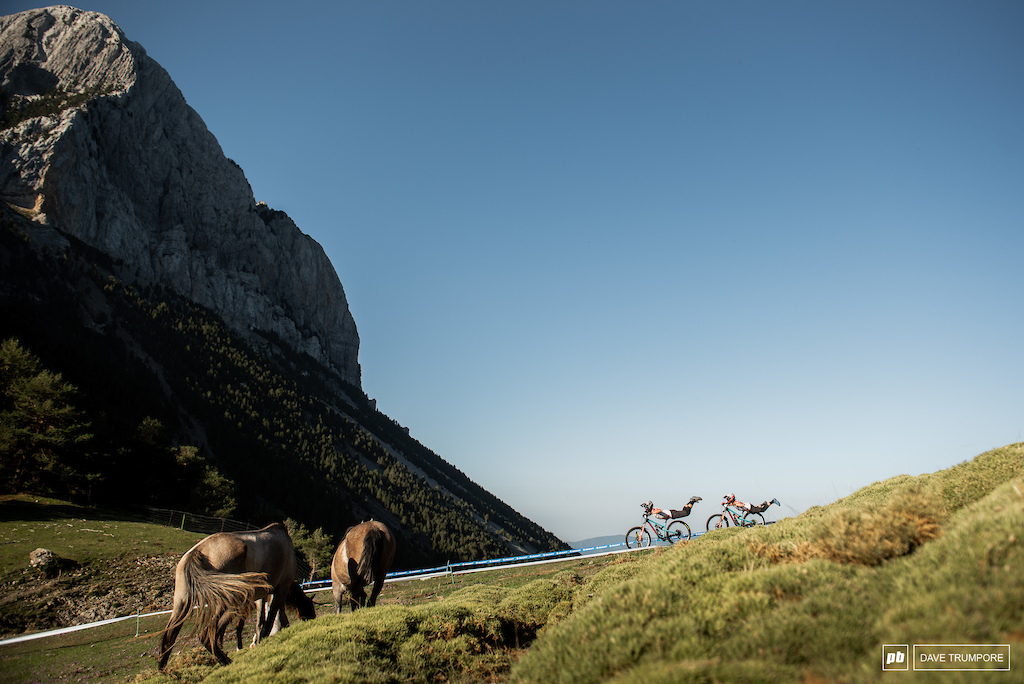 ShempHoward (Sep 22, 2018 at 10:32)
That is very respectful and a great example, and he still got 2nd. Personally I would have popped his other tire instead but I'm from Brooklyn.

ShempHoward (Sep 22, 2018 at 12:12)
Enduro and DH are a great example to all pro sprts. I have never seen a brawl, or any I'll intentions ( well maybe a little in the DS days with Wade Bootes ). Honestly every sports I can think of has fights, even Moto X racing.

rideronthestorm1 (Sep 22, 2018 at 12:19)
@ShempHoward: Yes I think there is a lot of respect in our sport , Think I can remember Lopes getting a bit tetchy back in the day , Stopping to help your rival change a tyre is next level sportsmanship

Mntneer (Sep 22, 2018 at 12:42)
@ShempHoward: on the other hand, I saw a woman get pushed over during practice laps before a race, and the guy yelled at her for going slow before he elbowed her off of the trail. She had a major concussion and a broken arm, and the guy never came forward.

Mostly good folks, but I run into a few shitty characters here and there.

ShempHoward (Sep 22, 2018 at 12:44)
@konacyril: Ya the DS days got a bit competitive but today Enduro and DH make other sports look uncivilized. Helping your rival is amazing.

Trudeez (Sep 22, 2018 at 13:04)
@ShempHoward: there are brawls for sure, we just dont hear much about them. Too competitive of athletes to not have altercations every now and then. Remember Ratboy, sambo and Bulldog vs. Gee and his crew from a few years back.

Garantson (Sep 22, 2018 at 13:35)
@ShempHoward: I think the main reason why is the fact you are not racing face to face body to body with each other. I am pretty sure it would be different if there were.

ShempHoward (Sep 22, 2018 at 13:59)
@Garantson: Your right but even at the bottom of a AC track everyone have great vibes. DH skiing is way different, hell there is a brawl every week at Nascar.

jaame (Sep 22, 2018 at 21:03) (Below Threshold)
@ShempHoward: when you're racing the clock it is not the same as racing other humans. It's not man against man. It's man against the clock, or man against his own head. Any sport where people are in each other's vicinity, fighting for a win, has fighting. It's the nature of the beast. Nothing about sportsmanship or being a higher level of humans than in other sports.
To be honest, I wish there was more fighting in it. It's good to see a bit of argy bargy now and again.

Verbl-Kint (Sep 22, 2018 at 21:13)
Another thing to consider here is that Martin can actually still win the overall if Sam's results in the next 2 races are way below expectations. And yet Maes still chooses to help.

is it just because most of germany is xc riding?

NotNamed (Sep 22, 2018 at 10:38)
@housem8d: Mountainbiking in gerneral is Not that as accepted in Germany and Austria as in France/ UK, so many dont even think about biking sadly.
Also the French have one of the best trails in Europe... No wonder they are fast as hell.

jzPV (Sep 22, 2018 at 14:06)
@housem8d: another thing is that you can be quite an outsider in Germany if you choose an unconventional career path. Other pro sport athletes form athletics for example can only finance to their sport as so called "sport soldiers" where they get government funding.
One of the only things that is fully accepted as a "dream" is making it as a pro football player...
It's the same for musicians and artists... if you don't generate revenue, people unfortunately raise their eyebrows.

jzPV (Sep 22, 2018 at 15:54)
@dubod22: Yeah but that also has another reason. After WWII there was basically no culture left because everything was replaced by propaganda by these potatoheads and the western part of Germany for a large part just adopted american culture.

optimumnotmaximum (Sep 23, 2018 at 0:28)
@Levin192: when a country loses a war and is basically run by other countries for some time culturell identity will be opressed - thats always the case. What really makes the comment so bad is that it sounds like there was no propaganda and lots of culturel identity before when in fact there was only propaganda and a made up aric superhuman cult.

jamesbrant (Sep 22, 2018 at 9:53)
i thought Oton was going to race due to injury? i also thought Devnici would finally release it's Spartan 29er this weekend?

lognar (Sep 23, 2018 at 8:30)
@ibishreddin: richie would vaporize a walmart bike with his forearms. hard to be fast when your bike is in pieces

vanmtnbiker (Sep 22, 2018 at 12:30)
Fly into Barcelona or Bilbao, rent a car, and drive there. There are tour companies that will shuttle you in 4WDs. Spain has unreal mtn biking.

browner (Sep 22, 2018 at 14:05)
Riders deployed from FOB Airport in Spain will be dropped in their area of operations directly onto the trailhead during regular resupply runs of Richie Rude's spare tyres and bike parts. Or as another poster has said, just go to the place under your own steam.