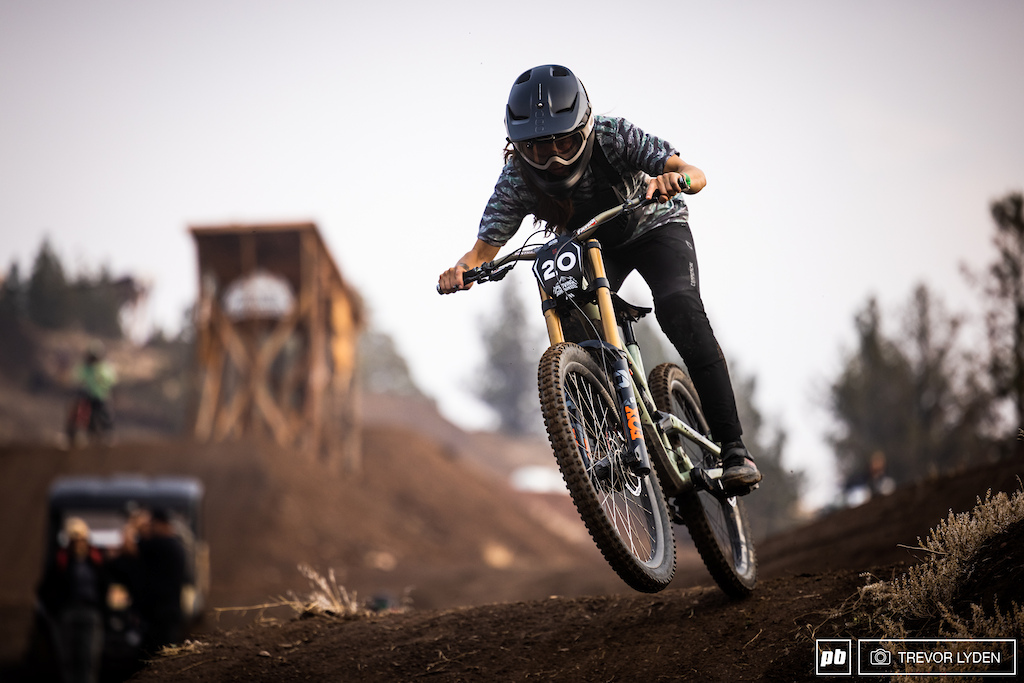 After a few days of big sends at this year's Proving Grounds, the results are in with Carson Storch and Cami Nogueira taking home the top honours. In 2nd place were Reed Boggs and Hannah Bergemann with Dylan Stark coming third.

Words by Proving GroundsAfter an extended break, freeride mountain biking comes back to life in the US with the successful completion of the 2021 Proving Grounds competition today in Prineville, Oregon. For the first time in the event’s history, a men’s and women’s category graced the same lines, same jumps, and tackled the same conditions, together. When the sun set on the Oregon Dirt Park at the end of the day Carson Storch and Camila Nogueira stood atop the podium, trophy in hand, looking out towards the future of events returning to the calendar and freeride returning to the center of the cycling zeitgeist.


On Friday, the western-facing slope of the Proving Grounds course had seen a steady drumbeat of precipitation, leaving competitors wondering what competition day would have in store. The early morning fog hung heavy on Saturday, overstaying its welcome well into the late morning, only lifting midday to the spectator and riders excitement: it was time to ride. As practice progressed it was clear that the bluebird skies were there to stay, and the riders were set to send.

With limited time on course, the six women that came into Proving Grounds were whittled down to two at the end of the practice period. Hannah Bergemann and Camila Nogueira both pushed their bikes to the top of the drying course, ready to show the freeride world what they are made of. Bergemann pushed off the start structure first for the day, leading the entire pack of men and women with the inaugural run for 2021, a brave feat for any rider. Nogueira’s second run of the day after the deck was re-stacked set her on a straight path for the podium.

“The win for me is great and I’m so proud of that, but I’m just so proud that I did a full run. The weather hasn’t been great and we weren’t sure if we would ride but when the rain started to dry Hannah and I were supporting each other, it was great ” said Nogueira after she climbed down from the podium, smile wide and future bright.

From the first few minutes of the Men’s competition, it was clear that it would be a dog fight as the limited practice hid who really had some firepower hidden up their sleeve. Carson Storch and Reed Boggs both had very strong first runs and the rest of the pack knew they’d have to put down a strong second showing if they were to have a chance. Dylan Stark threw down two extremely strong runs, looking to top Storch’s seemingly untouchable first descent, stretching deep into his bag of tricks. His efforts were still good enough to net him a third-place finish, impressive considering the competition. But Storch wasn’t to be bested, the Northwest native’s first run was clean, aggressive and just the right combination of style and amplitude to place him atop the first big freeride podium to emerge after a two-year hiatus.

“With COVID, I haven’t competed in two years or dropped into any kind of run -- my goal wasn’t to win, I just wanted to get into that mode again and I’m stoked,” said Storch, “Spinning the canon drop was super awkward, high speed and huge gap for a drop… that was the only thing I was nervous for” laying on a little humility at the end of a long day in the dirt.

@enduro29erHack I know him from Youtube. Ride a lot of BMX and downhill. Very gnarly guy. Distinct style with his videos.

UtahRider840 (Sep 14, 2021 at 9:12)
Final results on @provinggroundstour insta page and full event edit will be out soon on YouTube channel.

Djambor (Sep 12, 2021 at 10:28)
Major props to Cami and Hannah and all the ladies out there. Those features are no joke! Also so stoked to see Dylan on the podium. Well deserved.

Svinyard (Sep 12, 2021 at 19:05)
Hoping they just need to get home and tune up some content before posting it. Definitely one of the most unique freeride events with a lot of big time talent there.

onemanarmy (Sep 13, 2021 at 9:52)
@Svinyard: The cell coverage at the event freaking sucks so everyone has to get home or back to hotels to process stuff and then upload. Considering the beer consumed on site I'd expect delays.

Irideeveryday (Sep 12, 2021 at 10:56)
Nice to see Dylan up there. He crashed during one of his runs doing a front flip. He is a good lad and will go far (I hope) and someday he will show up at Rampage on the VIP list.

EvinReed (Sep 12, 2021 at 20:13)
Casey Brown mentioned on instagram that she wasn’t allowed in the states because she was in another country recently. Could be the same for others who have travelled.

Svinyard (Sep 13, 2021 at 1:55)
There were others there but the rain took away a lot of practice time and I think they weren’t super comfortable with their full lines yet. Nicolia said there ended up being a decent bit of wind up top towards the end.

onemanarmy (Sep 13, 2021 at 9:54)
@Svinyard: With any wind at all it's nearly impossible for the women to keep up enough momentum to make it top to bottom. Either way, it's awesome as many made it as they did. Learning experience. Building blocks. Etc.