Join Pinkbike  Login
86 Comments
While we still have a few weeks until the World Cup kicks off in Lourdes the opening round of the Portugal Cup DH series saw a massively stacked list of riders making a weekend of racing that was a World Cup in all but name. In the Elite Women's race Myriam Nicole took an early-season win as she went around two seconds faster than Vali Höll. The Elite Men's race saw another big win as Amaury Pierron found just under two seconds on Goncalo Bandeira.

Currently these results are provisional as the live timing is still showing some riders without race times. We will update the article once we have the full final results. 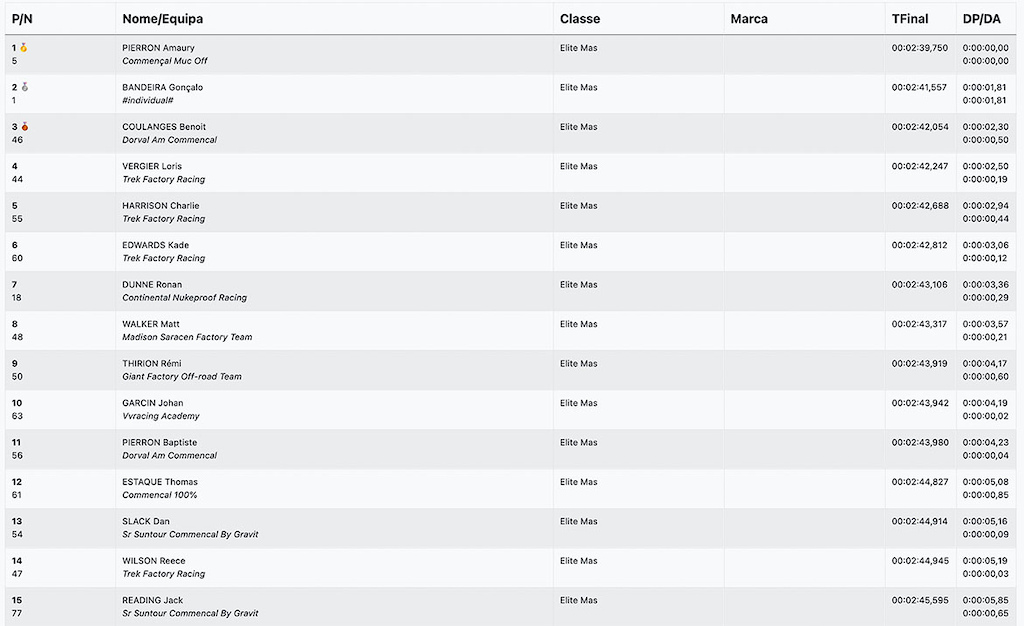 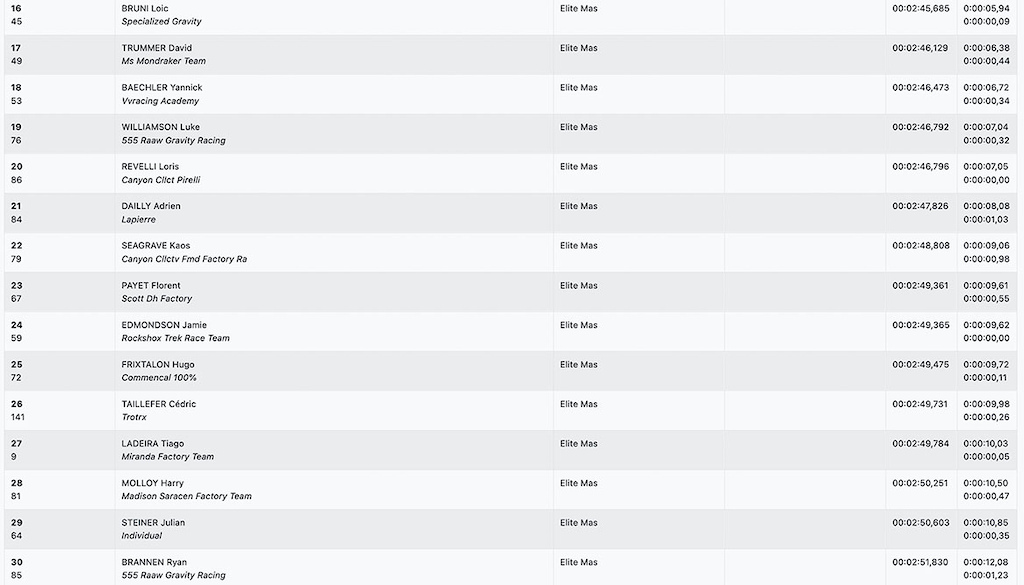 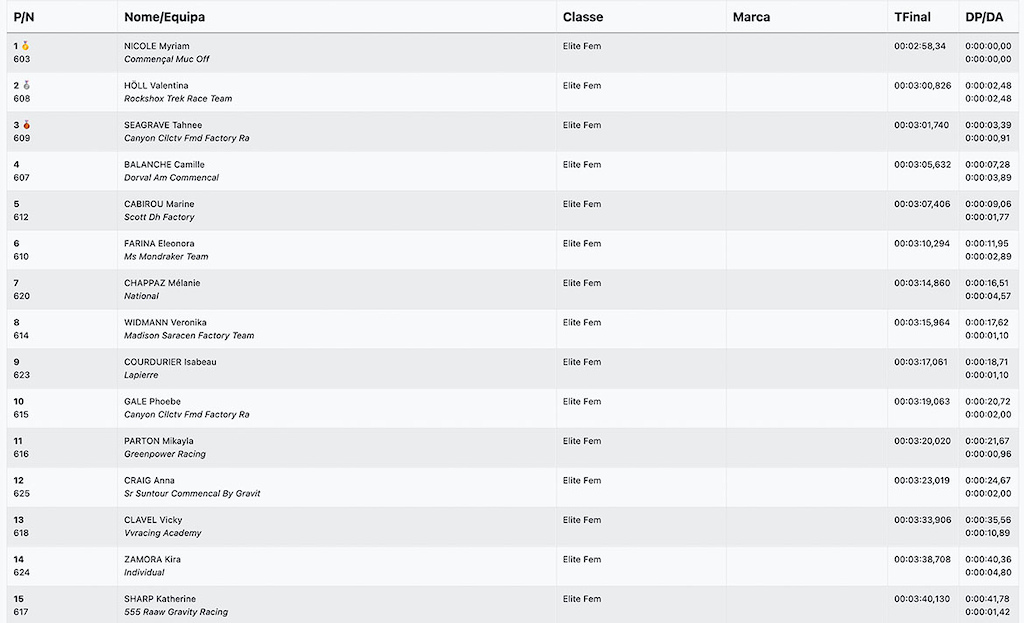 More results can be found here.

Share
Tweet
Must Read This Week
13 Bikes That Could See An Update In 2023
86128 views
Final Results from EWS Loudenvielle 2022
82532 views
First Ride: The 2023 Santa Cruz Tallboy Gets Updated, Not Overhauled
76031 views
Opinion: The Pace of Change in the MTB World is Slowing Down, and I'm All For It
57761 views
Review: 2023 Merida One-Sixty: An Easygoing Enduro Bike
41133 views
Evil Bikes Updates The Wreckoning With New Colors & a UDH
37986 views
Mathieu van der Poel Pleads Guilty to Assault After Altercation with Teenage Girls
36644 views
Review: The Digit Datum & Its Integrated 'Analog' Suspension
36133 views

TheLongMan (Mar 6, 2022 at 20:37)
Hyped for the Hõll/Nicole battle this season. given Hõll won last year because Nicole crashed, I think it will be pretty aggressive. Hõll's probably a little scared of her and Nicole's probably mega angry ahahah

yakimonti (Mar 7, 2022 at 12:06)
@bikefan88: No idea why you got downvoted, you are right, vali crashed more early season, myriam choked at the end with more experience, like, 12 yrs more experience.

lepigpen (Mar 6, 2022 at 12:50)
For real that read off like any standard world cup podium last season. Also cool to see Myriam bounce back with some dominance after last season. Snowshoe is a literal magnet for downhill drama. I couldn't believe how 2021 shaked out after what happened in 2019.

R-M-R (Mar 6, 2022 at 19:50)
He was one of the fastest and wildest riders in every World Cup race compilation last year. You'll do well with him on your roster if his "checkers or wreckers" style begins to incorporate more of the former and less of the latter.

thestraightline (Mar 6, 2022 at 13:02)
Damn! So excited for a new world cup season when I see these names on a result sheet. Downhill racing is rad!

Arierep (Mar 6, 2022 at 10:19)
@Balgaroth: easy to say idler bikes work when most of the line up is running high pivots and idlers.
By the way, Gonçalo Bandeira got 2nd on a Gambler

KalkhoffKiller (Mar 6, 2022 at 10:20)
@Balgaroth: more like frenchies are fast and get sponsored predominantly by commencal. These riders are fast on any bike.

c-radicallis (Mar 6, 2022 at 11:20)
@Arierep: Easy do disregard the fact that previously all those riders were on "regular" bikes and then decided to ride high pivot bikes with idlers.

Balgaroth (Mar 6, 2022 at 12:06)
@Arierep: sure, Trek, Commencal, Norco and many more are willing to put their riders on bikes that are less good than "conventional" bikes just so they can sell bikes with added complexity at the same price than any other bike. Or they probably didn't spend any time testing the concept and just gave the bikes to the riders "good luck to ya" and see what happens. I love to see people blatantly disregarding the hours of testing, prototyping and the hundred thousands of dollars spent doing so just because it doesn't fit their opinions, pretty fascinating.

pasteque51 (Mar 6, 2022 at 13:05)
@KalkhoffKiller: Indeed, saw a video of Pierron’s run, just incredible to see how agressive he is on a bike. For the other riders they follow Lapierre on recruiting fastest guys from US Cagnes: after Bruni Vergier and Dailly they got Daprela and Marini who won in juniors today

Mondbiker (Mar 6, 2022 at 14:08)
@Balgaroth: well, then you have Loic, Greg,Danny, Troy, Matt (and even Reece won WC) on low pivot bikes. So I think it´s fair to say there isn´t one suspension design that is better than all the rest.

Arierep (Mar 6, 2022 at 14:22)
@Balgaroth: Do you really think every single concept decision on a bike is lead careful R&D?
Are you convinced that all the brands you see conduct a deep research independently and in parallel, somehow reaching by convergent evolution mostly the same geometry and suspension concepts year after year?

Front the results you can even argue that the suspension design is not making much of a difference, at best.

And, by the way, do you even know what is my opinion on the suspension topic? Or did your magic ball tell you that?

Balgaroth (Mar 6, 2022 at 21:55)
@Arierep: it seems that my initial post was misinterpreted then. I am not saying that high pivot is the end all be all, actually I had a Suprem v4 which was terrible because high pivot and super short reach is terribly dangerous. My initial post was more to laugh at the crowd that automatically come to comment negatively about idlers. My current enduro is low pivot, after the V4 I had a Fury i-drive which was great, current Fury which as great too but more of a mid pivot (probably why it was great), and I have fond memories of my Sunday and Ion mk1. Tho with 26in wheels and respectively higher BB to axle, any suspension would be somewhat like a mid pivot with idler from 2022. Could explain things.
And put any of those big dogs on any bikes and they can win, which is why the idler policy or fan boy crowd is fun to mock as using race results to confirm this sort of stuff is pretty irrelevant.
Now I doubt that brands releasing High or Mid pivots don't do at least some A-B testing with their riders to ensure the bikes are faster and depending on riding style one or the other might be better bit when you invest millions in a race team you would be crazy to not test and time those things, which they no doubt do.

Maxcommencemal (Mar 7, 2022 at 7:31)
The season has fully kicked off already. Brioude cup is this weekend, the start list is totally nuts for a regional DH and it's in the Pierrot's home town! There should be plenty of coverage for it cos both Cathro and Wyn are racing.

Maxcommencemal (Mar 7, 2022 at 7:34)
Spell checker let me down, but all's good. I'm sure that in a parallel universe Pierrot is at the sharp end riding against Brownie and Mooner, probably.

mexicanoportugal (Mar 7, 2022 at 2:25)
Decent vid here if anyone's interested: www.youtube.com/watch?v=e4flAdrmwXA&t=14s Amazing result for Gonçalo in such a stacked field... (Reece Wilson 14th, Loic Bruni 16th and the list goes on!)

styriabeef (Mar 7, 2022 at 2:27)
Uhhuhhuhuu, French domination continues.
Seems like Myriam and Amaury have some unfinished business left for this year.
I´m so lucking forward to Lourdes!

Xavier-dh25 (Mar 7, 2022 at 5:05)
We have some bits of the live we did on instagram, including the full Qualy run on the technical section. Check @officialcodebike.

commental (Mar 7, 2022 at 10:51)
He qualified in 15th, but the results show him as "on track", not really clear what that means. You know it's time to look at your site layout when scribd looks good in comparison.

The-Foiling-Optimist (Mar 7, 2022 at 15:01)
@commental: Daprela is now showing last in elite on the Timingpro site, so must have got down and got a time. Probably a mechanical. There aren't any DNFs or DNSs on the sheets however so Tuhoto-Ariki, who seems, per Instagram, to have crashed in qualifying isn't on the sheets at all. I'm mildly curious about some other people I thought were there but not in the results, like Lucas Cruz and Mille Johnset. Anyway, it's always good to have timing data to look at. I have spent considerable time finding out what happened at, say, the 2021 Canadian National Downhill Championships, since without a timing company website, you have to wait until someone gets around to uploading it.

Rawkus777 (Mar 7, 2022 at 12:10)
Impressed by how little time there is between the number one spots in the men and woman’s category. Ladies are flying!