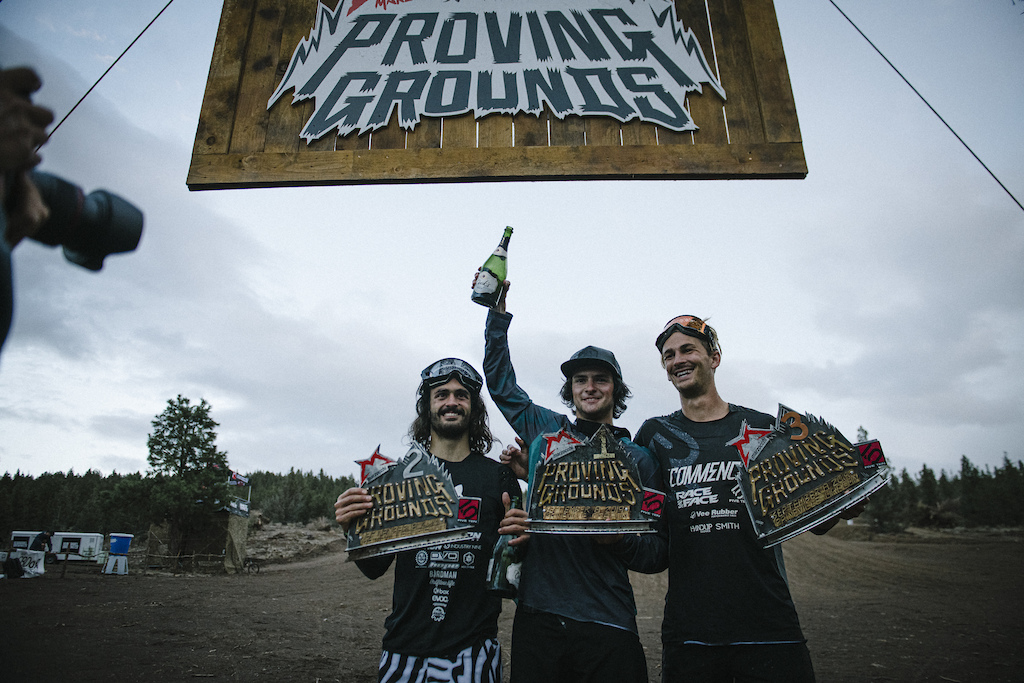 22-year old Bend native Reed Boggs set a high score early in the day with a first run that had two flips, a frontflip and a 3. Then rain and wind blew in and put a temporary hold to the competition. But a few hours later, the course dried enough to conclude a full second round of competition. The first run after the wind hold was Juan Diego "Johny" Salido from Mexico, who put down a huge run that was good enough for second place. DJ Brandt blew a tire coming off one of the start drops and was forced to abort his first run, but made his second run count to take third. Boggs' score would stand all day for the top spot.

The top 3 riders from the Marzocchi Proving Grounds presented by Five Ten have earned a spot at Red Bull Rampage 2019.

Casey Brown and Conor Macfarlane took big slams and had to pull out of the competition. Bienvenido Aguado took home best trick with a massive flat drop front flip.

More info, plus highlights video and a photo epic coming as soon as we can get some reasonable Wifi.

Like cashrolls. They dont belong in big mountain riding.

okei (Sep 9, 2019 at 6:40) (Below Threshold)
Oops. Winner did frontflip as well. My statement is faulty. Looking forward to see more frontflips at rampage! :--DD

okei (Sep 9, 2019 at 8:36) (Below Threshold)
@scott-townes: Its the biggest rotating meatball for sure. Coincidence or not, but awesome that it was lauched off the meatcannon. :-DD no seriously, all the respect for that kind of send!

louisidteam (Sep 8, 2019 at 23:05)
Is Aguado braking to launch his front flip!?! That looks insane. Braking just the right amount to have the right speed for both the jump and the rotation!

chainspotting (Sep 8, 2019 at 23:43) (Below Threshold)
That's the technique for a front flip. You time the point the front wheel needs to lock on the jump and that provides the forward rotation. I remember a video with Cam McCaul explaining it years ago.

K1maxX (Sep 9, 2019 at 4:15)
i have no idea but it doesn't look like he is braking. the fork seems fully extendet at the takeoff and his weight is all the way back.

leon-forfar (Sep 9, 2019 at 9:04)
@chainspotting: no, its the back brake that you use. The rear wheel stopping launches your momentum forward, and you can use your feet to pull the rotation around against your locked pedals. That being said, front flipping is timing, and you can do it without using brakes at all.

Svinyard (Sep 9, 2019 at 8:54)
Man, bummed it got so delayed (weather ugghh!). Had to make the long drive home to get kids to bed/school and missed the finish. Still, this is an awesome weekend. Way more people should be hitting these events. It's like seeing your fav band at a small venue. Black Sage is like a party (not boozy madness tho...lots of kids etc). The riders are literally bumping into you hiking their bikes back up, big smiles and they were SUPER cool to my young kids. Cam, Cam, Jordie, KJ, Carson, Emil, Tyler, Casey(!!) etc etc...its a blast.

Easy for families too with Cogwild shuttles (thanks legend Todd). Then Proving Ground is a whole other beast with the huge course etc. Awesome weekend. We stayed in Prineville, had hotel breakfast next to Salido and his lady like we were old folks at Dennys. Then hit Sage fest, then the hotel pool, then the Prineville dirt jump park (Vorheis helped make) and then bbq and beers at Crooked River brewing...all in a day with 5yro and 7yro. It's just a good time and easy going. Seriously, go to these things...its worth the trip and way fun. Prineville is affordable too.

PB: maybe see what the riders themselves think of the course before deciding yourselves from photos that ‘it’s not Rampage enough?’ I wasn’t there, but Cam Zink was. He’s only said good things about the course and I think he qualifies as an expert.

nzstormer (Sep 9, 2019 at 14:21)
Up until the crash - does anyone know how Casey Brown was doing? It's been an exciting story that needs a conclusion (at least for this year).

ruedaslibres (Sep 9, 2019 at 19:19)
Hardline and Rampage. Keep riding your bike like that Jhony!!! please don´t crash and send it huge, Congratulations man!

yoimaninja (Sep 9, 2019 at 5:49)
Saw the one drop form McCaul's IG. Shit is absolute massive. These guys have balls... and really good suspension!

scott-townes (Sep 9, 2019 at 7:33)
Yup, they're going to replant invasive tree species on that lot of private land. Yup, makes total sense to do.