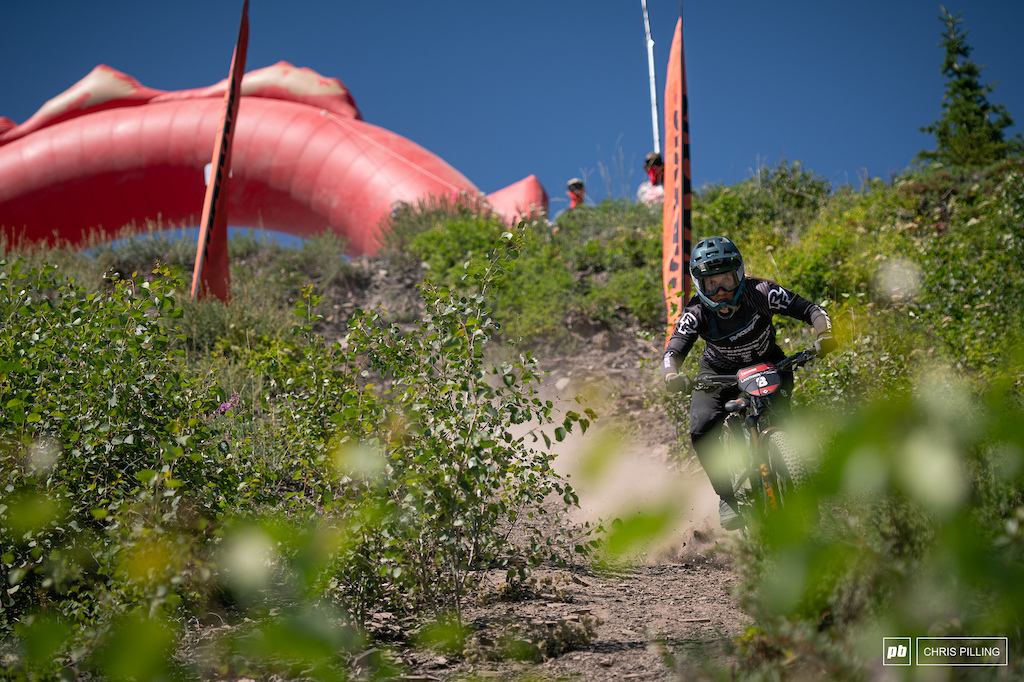 Over 1200 vertical meters. 7.3 kilometers of steep, rough and rocky singletrack. One infamous entrance, and one equally notorious “choking on glass” (credit to Tyler Morland in Seasons) hike-a-bike section. Add 10 years of history and a list of legendary champions, and the renown of the Mt7 Psychosis race starts to become clear.

“Trying to go as slow as you can is still really fast. And that’s kind of what’s always been the crux. That’s always been the key to this event,” explained Trevor Gavura, Event Director for the Golden Cycling Club. “You have to give way to gravity on this course. Most courses today in the World Cups, you can kind of stop on course anywhere, but this actually has sections that are physically impossible to stop on.”

After a 12 year hiatus, Psychosis was resurrected as part of the CLIF Crankworx Summer Series.

“This is one of the most privileged opportunities I’ve ever had, to get to work with the local team and be a part of resurrecting this race.” said Crankworx GM Darren Kinnaird. “Standing at the launch on Mt7 today, and getting to feel the nervous and excited energy as these athletes got their first look at the start, that was something.”

“When they’re fired up, I’m fired up,” added Gavura, who was the Race Director in previous iterations of the race. “And the more excited they get, the more excited I get. I could ride that course a hundred times, but I still don’t get as excited as watching some of the world’s best athletes drop in for the first time. For a little trail in Golden to be talked about all over the world was something. But now for the next generation of riders, kids that were 3, 4, 5-years-old the last time this race even ran, to still know about it and be fired up to race it, and that the course is still the same, 22 years later as when it first started, is pretty amazing.”

Lining up under the arch at the start line on the peak of Mt7 in Golden, with 360 degree views of the valley below: 23 of the world’s top mountain bike athletes, all of whom call B.C. home.

“I was shaking at the start line.” -Georgia Astle

“The hike-a-bike hurt my body and my soul.” -Georgia Astle

“I apologized to one of the marshalls and asked him ‘Is everyone this slow?’ He said ‘Yeah.’” -McKay Vezina, laughing, on running the hike-a-bike

“My mouth. So dry.” -Andréane Lanthier Nadeau, after crossing the finish line

“I’m so glad that’s over, but I can’t wait to do it again.” -Lucy Schick, the first rider to drop in to finals, singled out by the crew from the Golden Cycling Club as “the first person to drop into the race in 12 years.”

Schick’s statement was the prevailing one of the day: pain and elation - a mix of emotions that was strongest among the podium finishers.

“It was very hard going down. I was pretty much a shell,” said Henry Fitzgerald, who stood atop the Elite Men’s podium. “I was getting so loose, but didn’t really have the energy to do anything about it. But, it worked out.”

Fitzgerald’s time moved him firmly into the hot seat. His 11:19.19 smashed the course record of 12:35.14 set by Chris Kovarik in 2008 when the race was last run. At the time, Fitzgerald was 10-years-old. Fast-forward to 2020, the 21-year-old’s time also managed to outlast the 10 racers that dropped in after him, including Finn Iles.

“It was hard,” said Iles, who clocked the second fastest time of the day. The World Cup all-star has said that, mid-CLIF Crankworx Summer Series, he feels he’s in the best shape of his life. “That was one of the hardest races I think I’ve ever done in my life. That was insanely physical. Riding the steepest thing you’ve ever ridden, and then immediately just pumping and trying to carry speed, then immediately into a hike-a-bike...I’m tired. I’m really tired.”

Iles time of 11:28.81 meant the top two were separated by just under nine seconds.

“Nine seconds over 11 minutes is not a lot of time,” added Iles. “I think that’s like ¾ of a second every minute? So, you know, just those little moments where I thought I could rest, I could have put in a pedal stroke or something. But second’s good. Continuing the podium streak and putting in more points into the overall.”

The battle for the top of the women’s podium was even tighter. Under five seconds separated second place finisher Georgia Astle from the day’s winner, Andréane Lanthier Nadeau (ALN).

“We actually have a mechanic here at this event who’s taken part in Psychosis, Jeff Hunter, so I asked him what I should do,” explained the women’s champ. “And he said ‘Go as slow as you can and then once you hit the last corner of Dead Dog, then start racing.’ I definitely did that and, yeah, it paid off.”

But even with strategy and pro tips, no one was safe from...

“...mega overheat. Definitely some mega fatigue in the race run,” added ALN. “I just tried to keep it consistent so I wouldn’t go too much in the red zone.”

“...every corner counts, but also it’s just consistency,” said Astle. “But man, the hike-a-bike in the middle does not compare to Garbo. This was insane. It hurt more than I ever thought it could hurt.”

“It’s pretty remarkable,” said Brown. “I would have never thought that I would have been able to race Psychosis, because they stopped racing it in 2008. So, yeah, coming here and knowing how much history it has is really incredible. And being able to look back at old videos of Stevie Smith and Sam Hill racing this track, and even Tyler Morland and all those legends...it’s really cool to bring it back.”

“I’ve watched Seasons about a thousand times,” said Verner, who also said he “felt like death” after the race, adding that it was “tons of fun.”

“I knew all about this race even before this and, yeah, I was pretty excited to race it. It’s definitely in the history books as one of the coolest races ever.”

As the vibe and dust settled, racers caught their long lost breaths, and the adrenaline of Psychosis mellowed for another year (or 12), riders stopped to thank Gavura.

“As long as you guys had a sh*t load of fun, that’s all we care about,” he answered back with a smile. 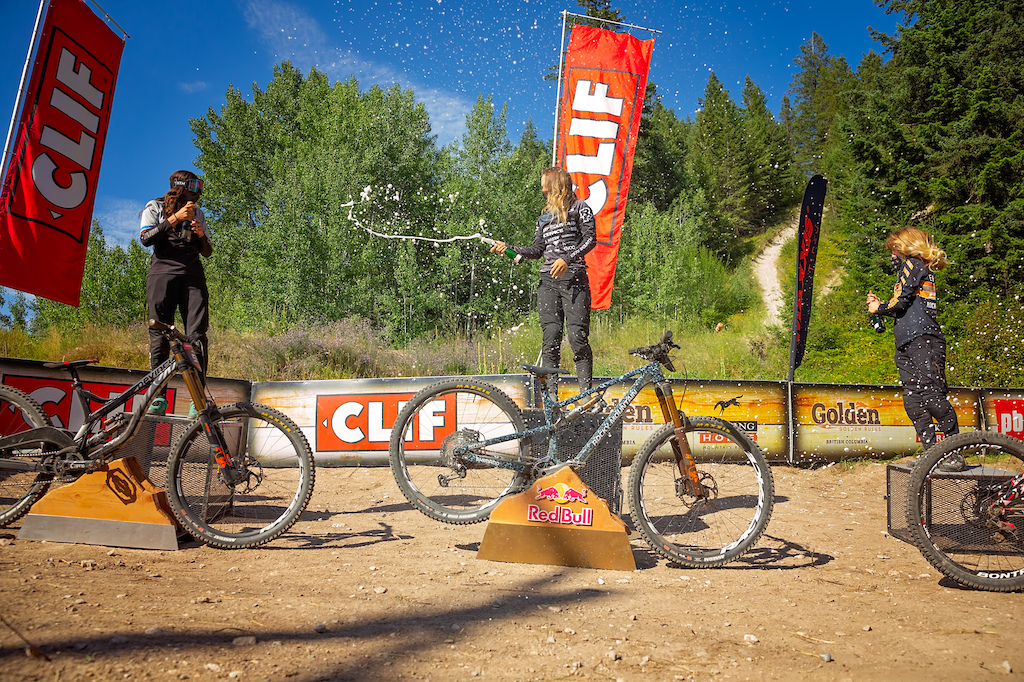 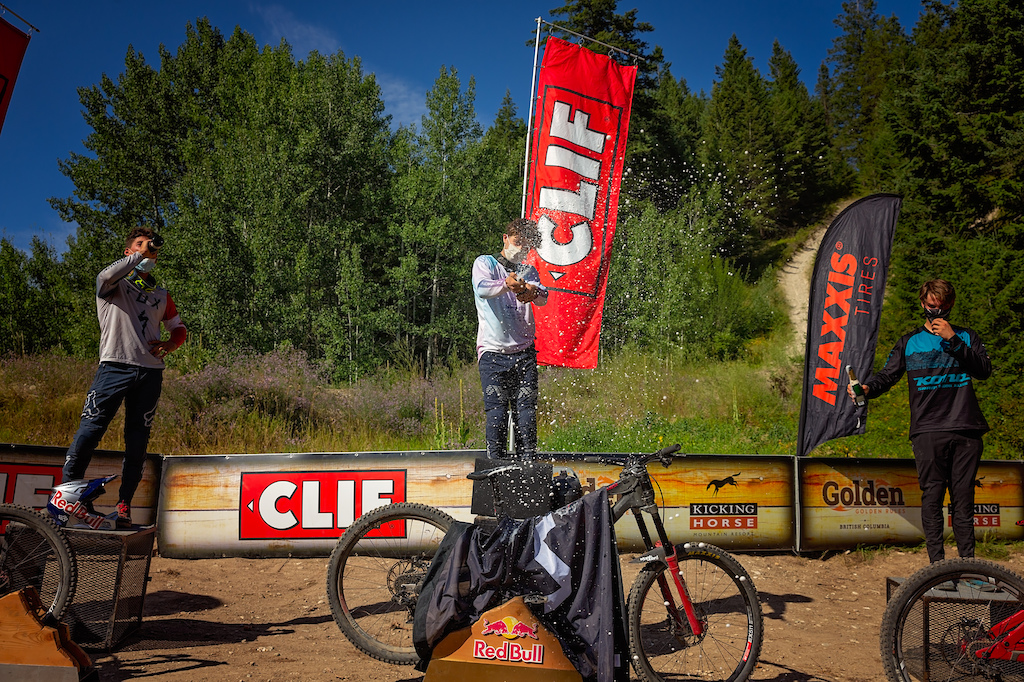 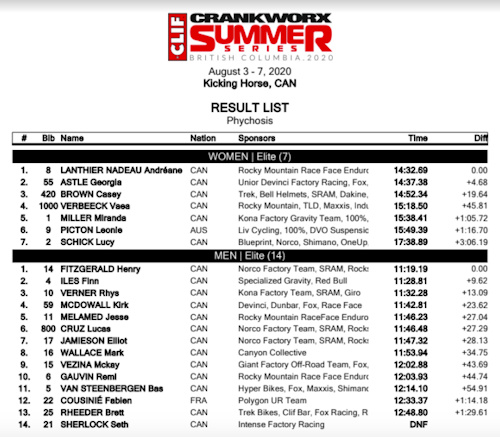 DabaZei (Aug 7, 2020 at 15:24)
I'll bet PB got scared seeing how many of us threaten to FridayFail ourselves, they had to rush and took a picture of scribd

SoddenDeath (Aug 7, 2020 at 19:47)
Psychosis racer from 2004 checking in. Scariest thing I've ever done. The only reason I dropped in at all was because everybody else was. Didn't want to be the guy that chickened out. Heart in throat is an understatement. Ate dirt a good few times in the pre-runs and ate even more dirt in the race proper. Wasn't pretty but I got down in one piece. Wouldn't do it again. Should be part of the yearly Crankworx schedule for eternity!

markcorrigan (Aug 9, 2020 at 6:47)
Genuine question here, bikes have come along quite a way since 2004, you still wouldn't consider doing it again? Surely it'd be a fair bit *easier* now. (note the use of the word easier - i'm not saying it looks easy)
My point being, I wouldn't send half the stuff I do on a bike from 2004.

SoddenDeath (Aug 9, 2020 at 7:24)
@markcorrigan: Yeah you've got a good point. I was riding a 2004 Norco Launch with Super T's in a mullet setup (26/24 for you youngins), but even then the HRA would have been 67° I reckon. It was really tall with a really short wheelbase... I wasn't a big fan of it at the time, always felt super awkward. Hated doing log rides on it - preferred riding my old RM Oxygen Race hardtail with Z2 Bombers on those to be honest! Fast forward to today and my low slung 140mm hardtail has a 1240mm wheelbase and 64° HA - so stable downhill and more planted on steeps (not that I ride steeps much nowadays though). So, that taken into account, on a modern bike with a beer in me (yes this is a bad thing I know) and a bit of encouragement from the mates I probably would give it another go. Then again, I'm now 41 and all of my joints ache and I've got two young kids to take care of. So maybe not.

Was great watching all of the riders shitting themselves over it in 2020 and having so much fun. Gotta love riding in the mountains! Yewwww!

markcorrigan (Aug 9, 2020 at 10:16)
@SoddenDeath: great reply!!
Shows how far bikes have come. I feel your point about aching joints haha.

I'm kicking myself (pun kinda intended) because I lived 2hrs from KH and Mt 7 for nearly 2 years and never found the time to ride there. Maybe I'll head back one day. Would love to give Dead Dog a crack.

lightningskull (Aug 7, 2020 at 18:26)
I'm impressed by Reeders time. Course is so gnarly and just pure DH goodness. Everyone should give it a go. Dead dog really is something else

SoddenDeath (Aug 7, 2020 at 20:16)
Dead Dog is definitely not everyone's cup of tea. I'm all for people standing at the top and looking down, and saying "yeah nah."

stinkball (Aug 7, 2020 at 22:34)
He even crashed twice. He had a huge OTB at the top of RTC another steep section.
He was so jacked to race, I haven’t seen him smile that much in a while.
His arm was hurt enough that he couldn’t race the DH today.

BDBRIDER (Aug 7, 2020 at 17:20)
Had the opportunity to ride this trail when visiting Golden in 2015, insane trail, would be exhausting to race. Would love to see more races here again.

southoftheborder (Aug 7, 2020 at 17:34)
I haven't had your luck in riding up there at BC, but I definitely would love Mt7 to become a regular stop at the Crankworx circuit, or any other race season as well!!

trillot (Aug 8, 2020 at 18:37)
Finn: "Nine seconds over 11 minutes is not a lot of time...So, you know, just those little moments where I thought I could rest, I could have put in a pedal stroke or something". Would you say that on the world cup if you were beat by 1.5 seconds? Dude, just congratulate the guy that beat you. In the words of Dominic Toretto from Fast & Furious: Ask any racer, any real racer. It doesn't matter if you win by an inch or a mile, winning's winning.