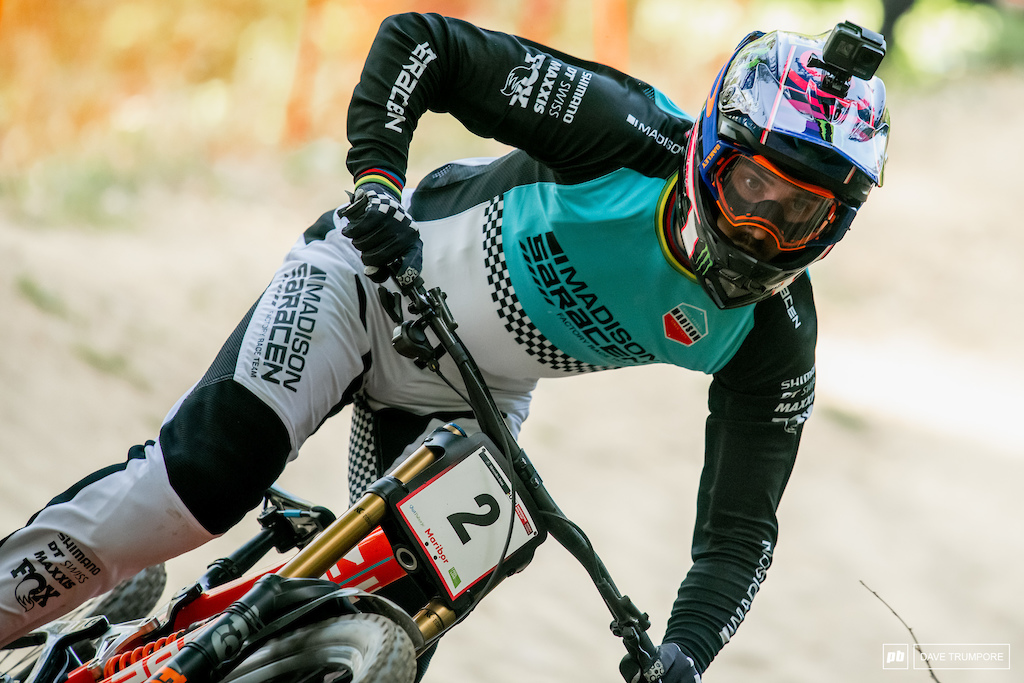 With qualifying in Maribor complete let's see where everyone finished after the rain fell on an already gnarly track. In the Elite Men Mark Wallace was able to battle the wet conditions and come down the hill with a time of 3:17.756. Aaron Gwin would pilot his new Intense M29 down in second just 1.8 seconds off the pace, what can he do on race day tomorrow? Finn Iles looked to be flying through the slippery rock garden and would cross the line third. Laurie Greenland and Loris Vergier would complete the top five.

The rain started to fall as the Elite women were on track so it is hard to know just how much this affected the times. But despite this Tracey Hannah goes fastest in Maribor, taking almost two and a half seconds off Rachel Atherton in second place. Coming almost another two seconds back from Rachel is Tahnee Seagrave who crossed the line with a time of 3:34.378. Nina Hoffmann is continuing to look very fast this weekend as she secured fourth position and Monika Hrastnik completes the top five women.

In the Juniors, it is no surprise to see Thibaut Daprela and Vali Holl top the charts once again. What is unbelievable is that Vali Holl set a time that would have placed her second in the Elite Women beating even Rachel Atherton, leaving Tracey Hannah the only woman unbeaten by the Junior rider. Thibaut Daprela would take the fastest time of the day at 3:04.941.

bashhard (Apr 27, 2019 at 7:27)
@lognar: He was injured last season so he was not good enough in the overall points to be protected. Sad story

motard5 (Apr 27, 2019 at 12:37)
@bashhard: Per Minnaar's Instagram ~ "There’s a first time for everything and unfortunately today was mine, missing out on finals tomorrow for the first time in 20 years! Hectic weather before quali’s made things interesting, but I had a good run going until I pushed the front somewhere in the middle woods. Trying to push on with muddy hands, grips and a twisted front end afterwards was tricky and we ended up just missing the cut. What a week for the syndicate, but that’s racing!!"

Me: Switches him off my Fantasy Team

Scroll down to the bottom
Currently very slow refreshing

robito (Apr 27, 2019 at 7:40) (Below Threshold)
Can we just break a rule or something and put Vali in with the big girls already? That would add some spice to the women's races for sure.

ka-brap (Apr 27, 2019 at 9:25)
@robito: It's because she doesn't want to- yet. She's still in high school and wants to finish without the distraction that training for Elites would require.

illO (Apr 27, 2019 at 5:20)
Does anyone know why there are only 7 junior women? Is it a lack of UCI points to qualify for WCs or there aren't that many junior women interested in DH/racing?

humoroususername (Apr 27, 2019 at 6:25)
@yzedf: whybis she a bitch? Do you know her personally. Lack of girls interested in the sport I'd imagine is the main reason. Most countries national series seem to have 200-300 men compete and about 5 girls if they are lucky.

yzedf (Apr 27, 2019 at 6:42)
@humoroususername: she's the one that pursued the policy that teams aren't required to have a pro woman rider.

So genitialia alone should dictate whether an individual deserves to be on a pro team? Not their riding, personality, and involvement in the sport?

IIRC she has said that they're willing to consider bringing a female on to the team, if she meets their criteria.

yzedf (Apr 27, 2019 at 7:37) (Below Threshold)
@turco999: think of this, where is Vali going next season? If Santa Cruz gave a shit, she'd be signed already. She'll be an immediate podium regular, possibly multiple race winner in her first season. Still on a deal for a frame here, SRAM/Rockshox there, Red Bull and whatever other random stuff. It's absolutely ridiculous. If she was a he, all the big teams would've signed her up last year. Finn wasn't nearly as consistent in comparison to her, and Specialized signed him and tested him as the second coming...

humoroususername (Apr 27, 2019 at 7:51)
@yzedf: what you are saying makes no sense at all. She will be signed anyway because she is class. She is far and away better than any other girl and will be signed because of that. What on Earth makes you think teams being forced to sign some other less talented girls would give Holi a better deal?

yzedf (Apr 27, 2019 at 7:56) (Below Threshold)
@humoroususername: she's a woman so she hadn't been signed (or maybe her management people suck?). All the guys get signed as Juniors. What's not to get?

eblackwell (Apr 27, 2019 at 8:04)
@yzedf: @yzedf: I remember hearing that Vali is on something like an 8-year deal with YT for frames when she first arrived on the scene. That is probably why she isn't on a factory team. She also seems to have pretty good support from SRAM/TLD and YT. For example, Monika Hrastnik rode one of Vali's practice bikes for a good chunk of last season when she was still a privateer.

I think Vali is already taken care of well in terms of sponsors (as others have mentioned). From my point of view, she seems to be doing fine with what help she has now, and can grow her capital once she starts podiuming of elite too.

Comparing her consistency to Finn is a bit skewed, since there is undoubtably a deeper competition pool in the men's field than the women's (20 potential podium riders in WC men vs maybe 6-7 in women's?) Finn was also marketed well, since he rode in a mtb mecca.

humoroususername (Apr 27, 2019 at 8:31)
@yzedf: it's good to be reminded every so often that some people don't seem to have even a remote understanding of economics.

First of all, Holi stands out because she is so far ahead of the other girls. The boys who are just as talented (relative to the senior men) don't stand out because the field of talent is far deeper. There have been dozens of first year juniors in the boys category who are within the same percentage of the male winner and they don't get a fraction of the attention Valentina does. Can you name a single 16 year old male who is getting the same attention as Valentina?

"All of the guys get signed as juniors" - eh no they don't. A handful do but the majority of junior riders don't have to pay their own way.

Second of all, I'm pretty sure she is sponsored by Red Bull, SRAM and TLD...isn't that kind of a big deal in itself? I'm pretty sure her being a woman has had nothing but positive results for her in this sport. If she was a boy she would probably be just another talented young fella.

Planetx888 (Apr 27, 2019 at 6:03)
So did serious rain happen between junior men and elite men? did junior men start lower? Daprela is a full 10 seconds faster that Mark Wallace, with some other fast juniors hot on his heels.

smithcreek (Apr 27, 2019 at 6:18)
Track conditions must be improving late in the men's, lots of late starters qualifying for tomorrow and lots of top riders whose times don't look like they crashed, getting sidelined.

Lots of big bib numbers in the top 25.

shedsidechuck (Apr 27, 2019 at 11:25)
for the first time, I'm super stoked about the juniors, men&women, and their progress. new breed comin on strong
and by 2021 there will be a major change of the guard.

Victor2005 (Apr 27, 2019 at 13:35)
is the junior men and elite men racing down the identical course. Just curious because Daprela was over 10 seconds ahead of Mark Wallace

oneheckler (Apr 27, 2019 at 14:19)
Next time Greg ,don’t be so pick about your set up cause you have nothing to proff and I mean nothing,just ride like you are in heaven,but without wings-

bnkeith (Apr 27, 2019 at 17:04)
Interesting to look at the speed trap rankings and how there is zero correlation to the result of the rider.

evolvo13 (Apr 27, 2019 at 8:13)
Weather can affect competition in all kinds of racing... Formula One auto racing, or the Rolex Kentucky Three Day Equestrian event, both of which are going on this weekend. This isn't a new issue, because weather isn't a new issue. It's part of the game.

damo (Apr 27, 2019 at 9:14)
Yes happens in Alpine racing all the time the course glazes over snow gets faster and the later skiers come out if nowhere to win a world cup. Never mind sports like ski jumping where small weather variables like wind can make a huge difference. That is part of doing an outdoor sport that isn't a mass start.