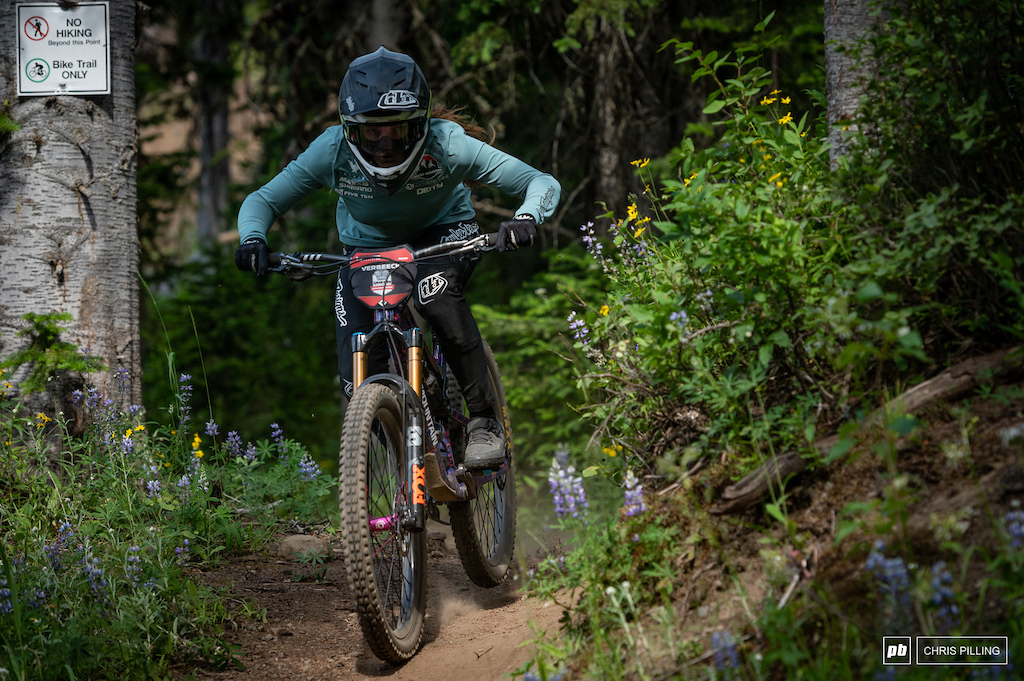 Kirk McDowall had to drop in unexpectedly last after a mishap on his first run.

“It got quite windy right before we started going, and one of the aluminum banners fell onto the first corner on the course,” said McDowall. “I couldn’t see it until it was too late. Thankfully I didn’t crash, but the bike took a hit and really bent the front brake rotor really badly. Someone was able to bring one up for me and we swapped it out at the top. That was a new experience for me, but it turned out OK.”

McDowall fixed his bike and did a re-run, finishing his day with a 4:33.52, earning him the final podium spot.

“I feel like my brain has been going a hundred miles a minute. Of course during the run it always is but now this time the 10 minutes leading up to my run as well I was just stressing. It feels like kind of a relief to just be down here now. It’s nice to be in third for sure. I had a good run.”

Just one race to go after this Maxxis Sun Peaks Downhill in the CLIF Crankworx Summer Series. 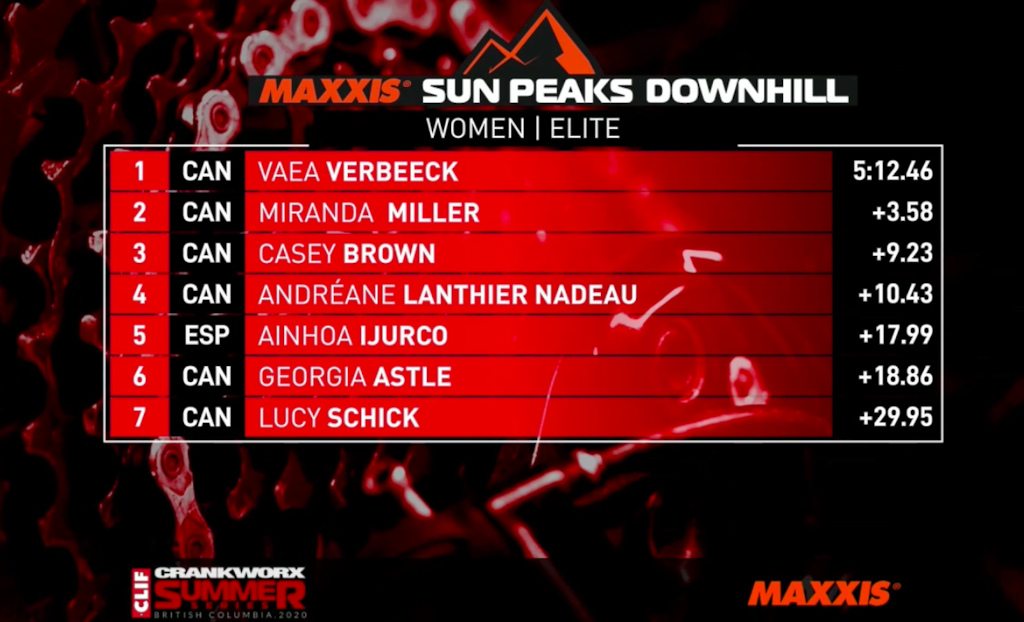 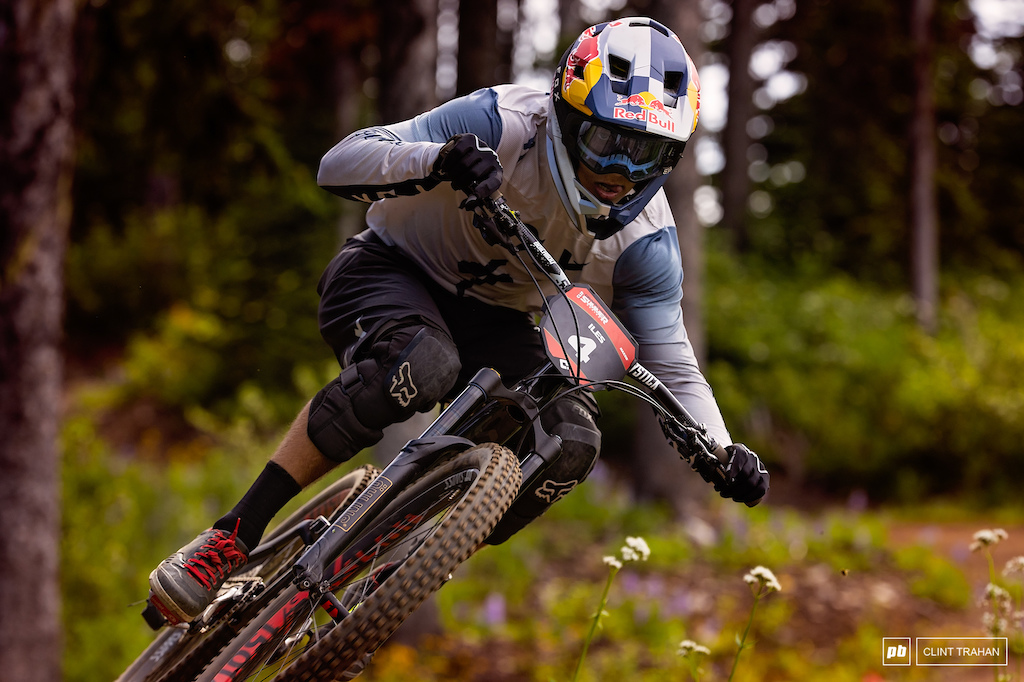 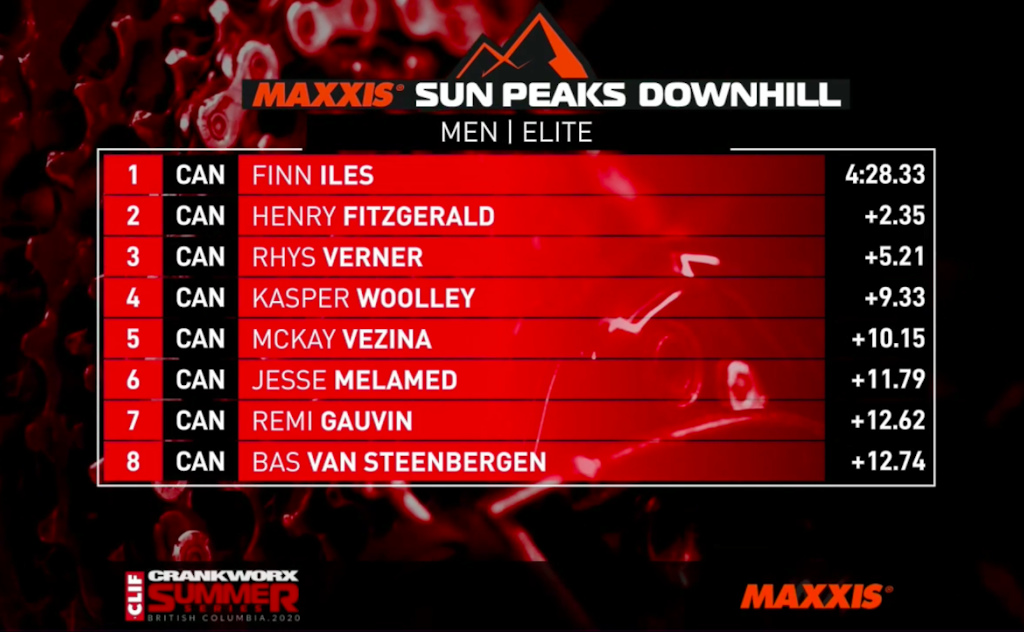 Check out the schedule in the Pinkbike Primer and stay glued to our Instagram for live updates.

Mattysville (Aug 13, 2020 at 15:05)
I think if they can get fresh again physically while still carrying some of the competition level speed these riders are going to be in a really great spot once (if) they race internationally again this year. I wouldn’t count Finn out as a top contender at Worlds if they happen and he can stay upright.

Endurip (Aug 14, 2020 at 1:34)
If Kasper would have competed at all races, he wold still most likely be second. And he would still be pissed of for losing against Finn. But I guess that will motivate him to get even faster. And if we talking style and cornering, he wins over Finn by a huge margin.

sooboyki (Aug 14, 2020 at 6:51)
@Endurip: Everyone has a list of ifs. Injuries, mechanicals, crashes, new bike, wrong bike, too tired etc. Some talk about it, some don't. The bottom line is your time. It is a timed event. Will you be able to survive your beloved Enduro idols losing to DH racers?

jesse jesse melamed
you make my mind go mad
like you shralp and do the braaaap
oh my, you're a really crazy lad

chri92 (Aug 13, 2020 at 22:00)
@danimaniac:
Jesse Jesse Melamed,
you ride faster than my dad,
you make rock gardens look so smooth,
Everyone knows, that's the untold truth

(My rhymes are the best)

TheBrosCloset (Aug 13, 2020 at 14:57)
I'll be interested to see if this series end up producing results on the fall racing scene for WC/EWS compared to riders who haven't been racing in their areas.

barry9559 (Aug 14, 2020 at 3:53)
Guessing Kasper was first man home on an Enduro bike again. Can't wait to see how he does back at EWS next month. This event has grown his fan base significantly. He'll be owe Crankworx Summer Series a few beers when it comes to contract renewal time. Very likeable kid with serious talent.

shawnca7 (Aug 14, 2020 at 7:27)
With no WCs going on I find myself seriously interested in this series.
Below threshold threads are hidden

danimaniac (Aug 13, 2020 at 23:56)
are you really doing it again?
dude.. your gov. left y'all alone... american people die like flies and your orange president rather wants to change a law about how much water may run through his shower head? WTF really....

tracer2 (Aug 13, 2020 at 15:21)
Is Canada letting people in for “non essential” travel? Just a guess but last I read in the headlines non residents were out of luck.

You people? I don’t think you can write that nowadays.

swenzowski (Aug 14, 2020 at 4:32)
lool this person's name is literally "troll hunter" and people responding like it's a serious comment