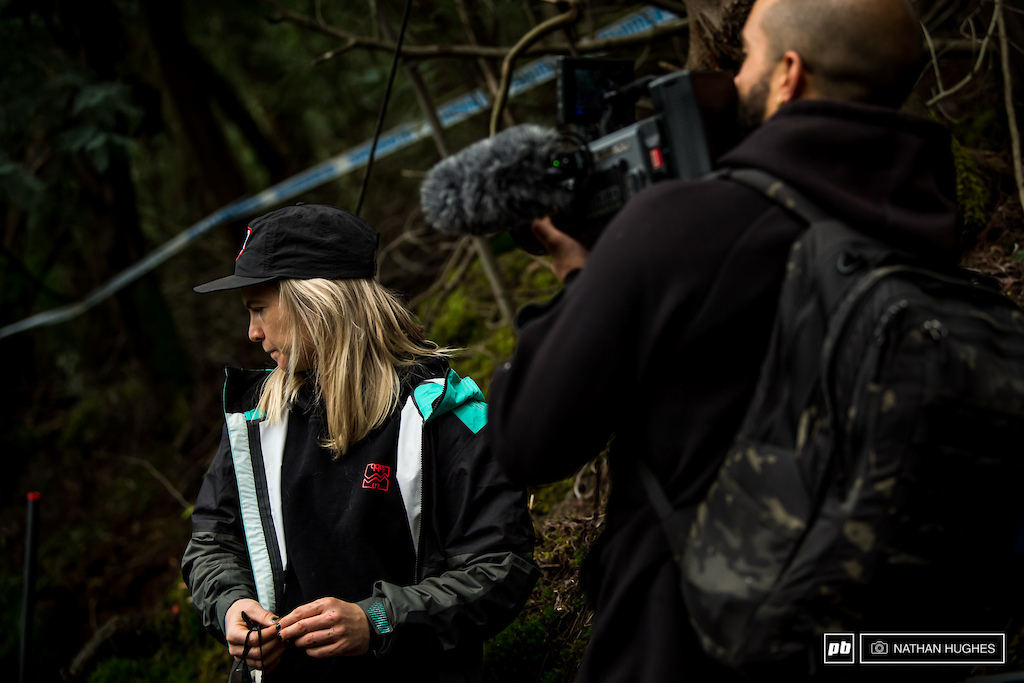 The first results are in from the first timed session in Portugal on the new track. As with last week, training today and timed training takes place on Track 1, the tracks will be switched over on Friday night but there will be no timed training on track 2 later in the week. 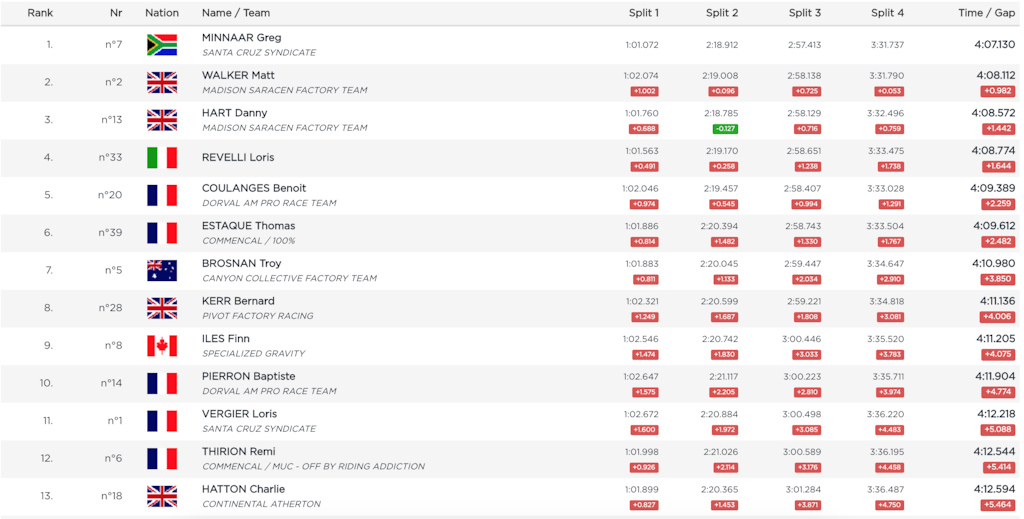 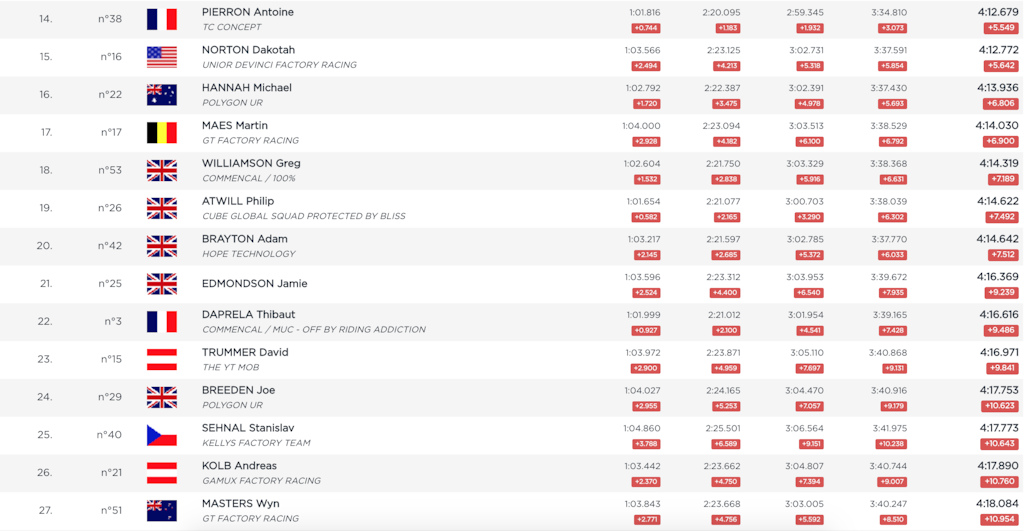 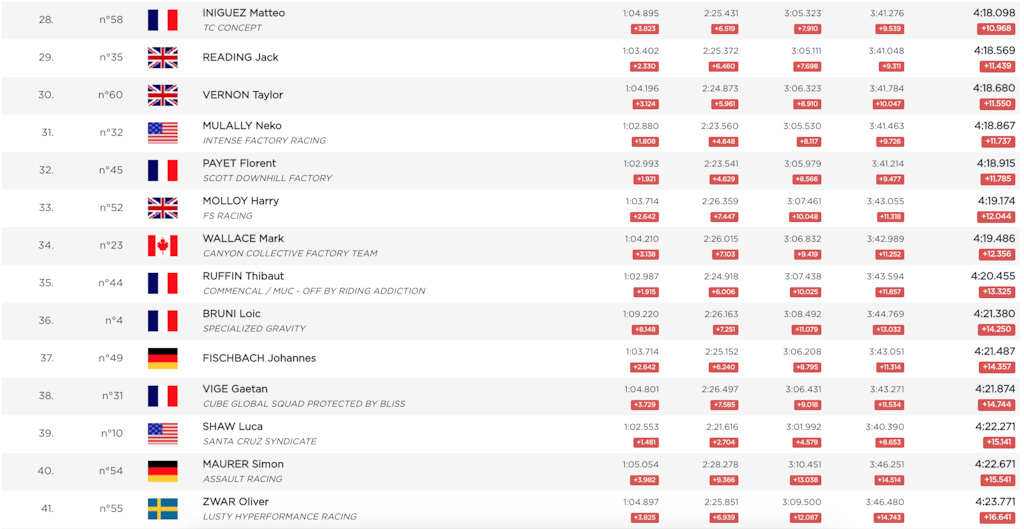 jaame (Oct 28, 2020 at 12:02)
@bikerbarrett: winning one race does not make you the premier racer unfortunately. Just ask Danny Hart.

blowmyfuse (Oct 28, 2020 at 12:10)
@jaame Luckily their results are graphed perfectly head to head on RootsandRain and you can see for yourself if there is a trend or not.
You can look at it with Danny as the standard like this: www.rootsandrain.com/compare795,1906
Or you can look at it with Matt as the standard: www.rootsandrain.com/compare1906,795

Everyone...remember to buy photos off Seb's site Roots and Rain to keep him afloat. this year has been hard!!!

formerbmxguy (Oct 28, 2020 at 12:11)
Didn't Danny admit in after Maribor round II with Wyn that he was holding back a bit and not risking it all?

jaame (Oct 28, 2020 at 14:19)
@blowmyfuse: Thanks for the links. Very interesting.
I have been told Matt Walker has been faster than Danny Hart for a few seasons in practice, but that reminds me of my training partner back in the day. He was faster than me in practice but never beat me in a race. Basically because I only ever went 100% in race runs. Not worth the risk in training.

blowmyfuse (Oct 28, 2020 at 14:36)
@jaame: The year RockShox held team camp at Windrock (2 yrs ago?), Walker was blitzing it, but you had the sense that Danny wasn't going to push it to the brink outside of World Cups while there.

That was also the year that the Commencal team was at Windrock too and I was like "Where in the F*** is Pierron going with all that Haul!?!!?"

ORTOGONAL555 (Oct 28, 2020 at 11:15)
I always noticed when he was winning a slow/stopping to spot lines time training run with a few fast splits here and there was a dead giveaway he was going to be on the podium. On the opposite a fast timed run meant he was looking for speed. Not sure if it's actually true BTW. Let's hope so.

maz-mtb (Oct 28, 2020 at 18:33)
@Korbi777: Lost nine minutes while trying to get a solid run or lost nine minutes while spotting lines? He's admitted himself during times of dominating the field, that he takes his timed training super chill and goes all out on race day. Not to say he has it in him, just stating from how he has been known to ride.

maz-mtb (Oct 31, 2020 at 10:34)
@Korbi777: Seems he did alright with his finish, making it kind of clear that he was scouting lines like his old ways. Unless these people are crashing non-stop or physically stopping on course, there is no way I can see ANYONE being 5+ minutes behind the leader in an elite category. There are riders who have had 2-3 crashes in a mud race and still only fell less than 45 seconds back.

ompete (Oct 28, 2020 at 12:12)
Walker looking like number one UK rider until Reece comes back? And Tracy possibly going out on a high?

Mntneer (Oct 28, 2020 at 13:27)
I would 100% take Walker over Reece. Sure, you gotta be able to ride in the mud, but most races on the WC circuit are relatively dry. Walker has shown more speed and consistency over the past two years

ompete (Oct 28, 2020 at 14:05)
@Mntneer: totally agree with you, Walker has been British champ as well, a young talent who's starting to find his consistency and hasn't reached his peak yet

jaame (Oct 29, 2020 at 2:20)
@ompete: I agree. Consistency is key. Reece could turn out to be a flash in the pan. Quite a few guys have one off wins. Especially in mud. I'm not saying he's slow, quite the opposite. Walker is definitely fast and consistent though. Danny Hart won't do anything this year with the new baby. Babies ruin your life. It's not until the stop being so useless that you get your life back. I would rather adopt a five year old than put myself through that hell again.

So this season Im saying Walker is number one, with Wilson or Hart being number 2.

His career is over!! Cant keep up with the new young guns!


*NOTICE: this is sarcasm

blowmyfuse (Oct 28, 2020 at 10:48)
Married life thins the man sauce for a bit until one can regain the stones to pin it again. He'll bring it back around.

And yes, sarcasm is king!!!

hamncheez (Oct 28, 2020 at 12:52)
Even when I explicitly say this is sarcasm, in the context of a long running joke on PB about timed training being more important than finals, people don't get it. I give up.

blowmyfuse (Oct 28, 2020 at 14:33)
@jonser: Yeah, I think it's how he applies pressure to himself. You can tell he only cares about the points and the podium and timed training runs doesn't affect how fast he can go in a final so why bother.
Mentally, he's just different.

Pretty sure there was a point where he uncorked a couple though. hah

lefthandohvhater (Oct 28, 2020 at 12:49)
Uhhhh its training dude. Also there are only 10 women so last place could have crashed, stopped, flatted etc.

bikingonbikes (Oct 28, 2020 at 10:16)
what in the world is happening in the men’s leaderboard these days so random

MarcusBrody (Oct 28, 2020 at 10:23)
Timed Training leaderboards are often pretty random. Different guys go differentially hard, so the guys who treat it as a full on race run are at the top whereas others (Gwin for example), seem to work on a particular section or two and coast (or even stop) on others.

jaame (Oct 28, 2020 at 10:41)
@MarcusBrody: a lot of British riders use this track as a winter training spot to escape the horrible weather back home. At least, I assume it's this track.

paulskibum (Oct 28, 2020 at 11:20)
@jaame: Its the Fox tuning camp spot from late Feb/early March also so lots of people know the track to some degree

paulskibum (Oct 29, 2020 at 8:33)
@jaame: I think there is a section with an alternate line for race 2 - not two full tracks - the track walk photo story showed a diversion