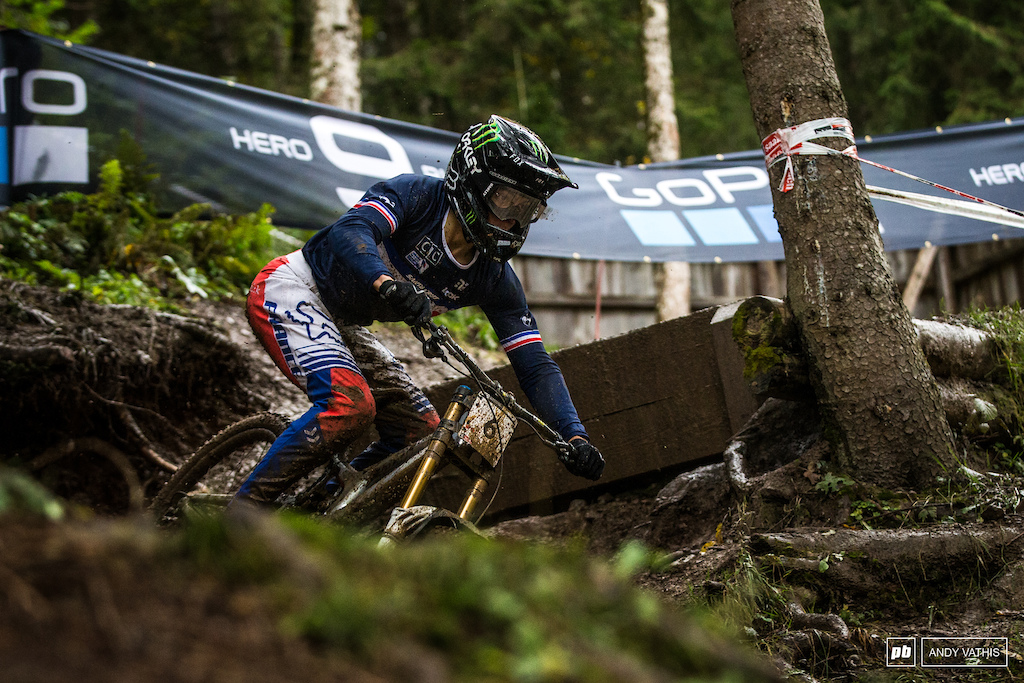 The results are in from the first timed training session of the year. There are four points where the track splits between Friday's race track and Sunday's race track and with both options open in training, riders had multiple avenues to pick from making these timed training results mean even less than usual. Having said that, we imagine most riders stuck to Friday's track for most of the day as extra practice time has been allotted later in the week for Sunday's track. This is the only timed training session of the weekend though so if you want to know who's looking fast before any points get awarded, the results are below: 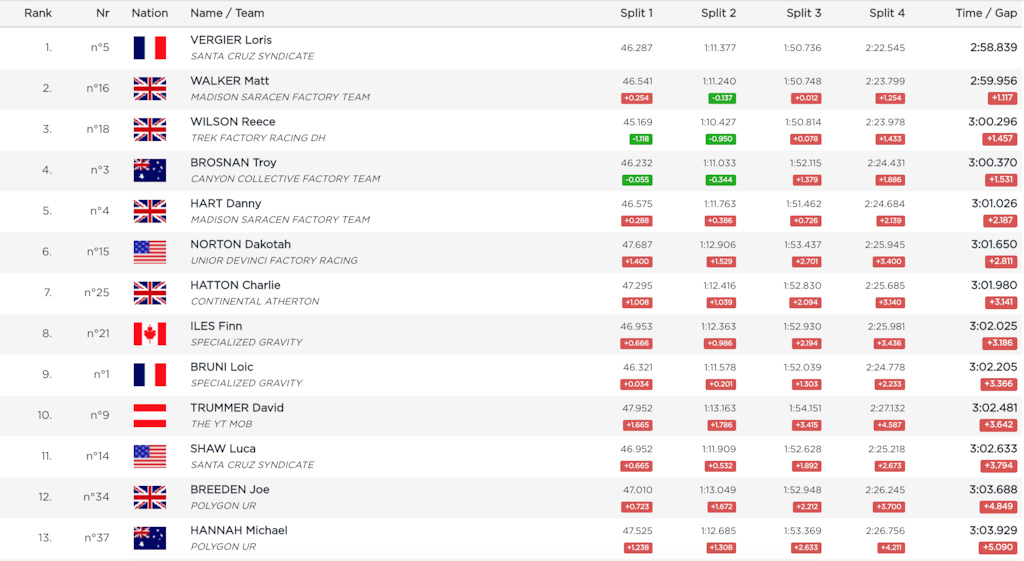 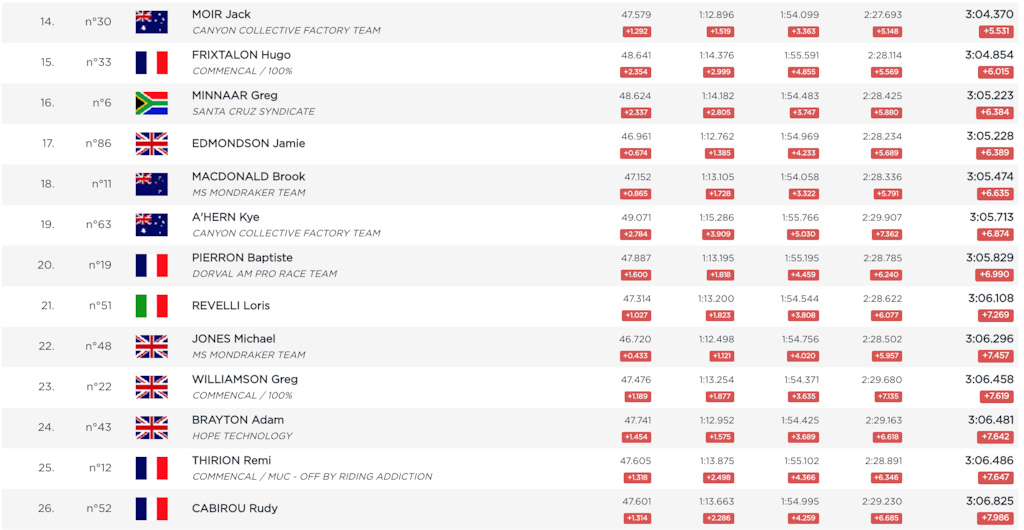 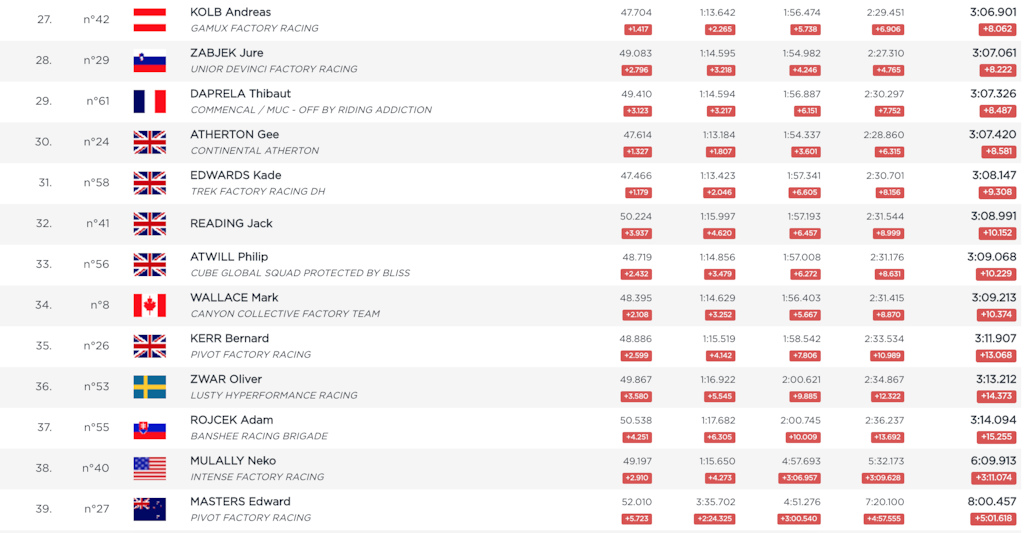 What are the odds??

BenPea (Oct 15, 2020 at 0:47)
@commental: the boss pissed in the reset button and puked Stella and kebab on the controls. The whole thing is now running purely on artificial unintelligence as we peer through the glass walls of the impenetrable chamber at his body lying lifeless on the floor.

adrennan (Oct 14, 2020 at 10:08)
@thewho07: It is a mental game as much as anything to break into that top group. I totally agree he can be a very real threat especially if it gets wet again like I have heard it is supposed to.

Socket (Oct 14, 2020 at 11:23)
Yep, very much proving it wasn't a fluke, fastest at the first two splits. Him stepping up and demolishing the field at Leogang was one of the coolest things that's happened in DH since Pierron stepped up seemingly out of nowhere to blow everyone else out of the water several times in a row a couple of years back. Stoked to see another rider up there as a real challenger for the podium.

JSW07 (Oct 14, 2020 at 8:37)
It's interesting to see Gwin having been so dominant on YT and Specialized and now is having a hard time breaking the top 10 since on Intense. I realize there is probably more going on behind the scenes than we can see, but it's still a bummer.

RCederholm (Oct 14, 2020 at 8:49)
He always does this in practice. I mean, he obviously was doing some track review with 6+ minute times in segments 3 and 4. Pretty sure he had a number of top 10 results last year but I do have to agree with you that the move hasn't met or exceeded expectations. And I hope he doesn't pull the "I haven't raced much this year" because nobody really has. And if they did race, it was because they made the effort to do so and he could have done so too.

So far only one race this year and it was in a mud bog. He's addicted to being in SoCal so as he said in an interview at Leogang he hasn't ridden mud since the world cup last year (not good training).

siobhananon (Oct 14, 2020 at 9:10)
have chatted with friends quite a bit on this. I'm gonna go out on a limb and say that it may have to something to do with simply not jiving with the bike. I'm no expert, but I feel like we haven't seen Gwin racing like himself since transitioning over to Intense.

It also has to be hard transitioning over to a smaller factory team (vs. Specialized, Trek). There is probably less support and fewer resources overall. I'm not even going to get into the team ownership stuff, because I know nothing about it - it just can't be easy to manage it all.

hamncheez (Oct 14, 2020 at 9:23)
Gwin had one healthy race on Intense, and that was here (Maribor) and he got 6th. Everyone was speculating on why he did so "bad", and its entirely possible it was the bike. I don't doubt that the M29 is a fast bike, but might not have jived with Gwin, which would explain his new mullet.

However, if his one 6th place is a bad result, and we are looking to blame equipment, then the biggest equipment switch he did was to Kenda tires. That makes much more of a difference than anything else nowadays. He wasn't on blacked out Onzas or Maxxis.

It’s called trying to keep up with faster, younger, guys, crashing your brains out.

RCederholm (Oct 14, 2020 at 9:50)
@thewho07: There was an interesting interview with Moir a few months back where he mentioned he did a time trial at home using the M29 with the previous components and compared it to the M29 with the new components and he stated the previous bike was seconds faster. This easily could have been an issue with him not being comfortable with the new components (even though Fox gets along with many riders). Quite interesting podcast.

Superburner (Oct 14, 2020 at 10:00)
@RCederholm: Remember that, wasn't it something like 6 seconds faster (over a WC distance) on the same frame with different parts. Makes sense, because Jack was very fast on that original M29.

creativefletch (Oct 14, 2020 at 10:32)
@thewho07: Gwin is riding a brand new prototype frame this year that he has worked with Jeff Steber to develop over the off-season. Jack was already flying with multiple podiums including a 2nd place at Fort William in 2018 on the M29 and a top 10 on the Carbine for the EWS New Zealand that same year. Last year he crashed hard during team camp re-injuring his shoulder.

Artikay13 (Oct 14, 2020 at 12:31)
@RCederholm: yeah Jack has pretty much only ridden sram/rockshox his whole career except for last season. He definitely prefers it, I mean his canyon setup is all that again and he's loving it

DirtyDee (Oct 14, 2020 at 12:57)
@creativefletch: Just because he had input in the design with Steber doesn't mean that will be the best/fastest bike for him. I think there is a lot of arrogance to go to a brand and re-design things as if you know better than the engineers. Certainly a rider's feedback is useful and they can time it and know what works against the clock but I think he often gets in above his head on the R&D side and the racing suffers as a result.

Plus he has the extra hassle of running the team. Why pay someone else who has been managing riders/teams since the start of DH mountain biking when you can do it just as well yourself, while training, racing and developing frames, tyres, grips, brakes, drivetrains etc... $$$$$$$$$$$$

phclaw (Oct 14, 2020 at 8:53)
Really happy to see Jack Moir back (I think from injury?) and doing so well, in both enduro and dh. Insanely capable and stylish rider, up there with the true elite all-rounders who are a threat for the podium in both disciplines.

Dangerhill (Oct 14, 2020 at 9:03)
I agree He seems more focused and serious in his interviews this year. If he stays on his bike he wins it.

NorCalNomad (Oct 14, 2020 at 10:02)
@Dangerhill: I'm almost bummed he hasn't had a chance to race more this season. I hope he can carry the momentum into next year so we can see some awesome racing.

yupstate (Oct 14, 2020 at 10:54)
It's interesting how when I'm riding with friends on Strava and we hammer a segment and are within 3-4 seconds I basically assume we all got the same time and nobody's faster. Then you see these results and you think wow, so and so smoked someone who's in like 20th place. But in reality, those pros riding for fun, even pushing can basically follow each other down a trail and are barely any different (GPS vs. time chips aside). Its crazy how close these guys are when you stop and think about it.

Mattysville (Oct 14, 2020 at 8:27)
Not to race but I think he said in Instagram he was there to do some filming and support some privateers.

thingswelike (Oct 14, 2020 at 8:31)
He's there but not racing.
From his insta:
Bad news! After check-ups on my neck it has been decided that it would be too risky to race the upcoming world cups. If I was to have another crash on my head there would be a much higher chance of damaging my spinal cord which would potentially cause paralysis. Not a risk I or anyone else should be willing to take. A bit more time and I’ll be good to go! #WTT2021

I am out in Maribor with the dream team (@maxxrendall & @angushardie) and we’ve got some sick plans. We’ll be helping out Scottish privateers @jamie_edmondson and @mikaylaparton with pit space, wrenching and trackside line info while documenting their races.

Also, in a wild turn of events, racers @oliverzwar and @benzwar have lost their bikes on the flight over to Maribor so I’ve lent them my bike until their’s arrive. Will be so cool seeing George actually getting ridden at a World Cup!

We’ll be documenting it all for Walk The Talk as well as producing some @pinkbike RAW and Inside The Tape vids.