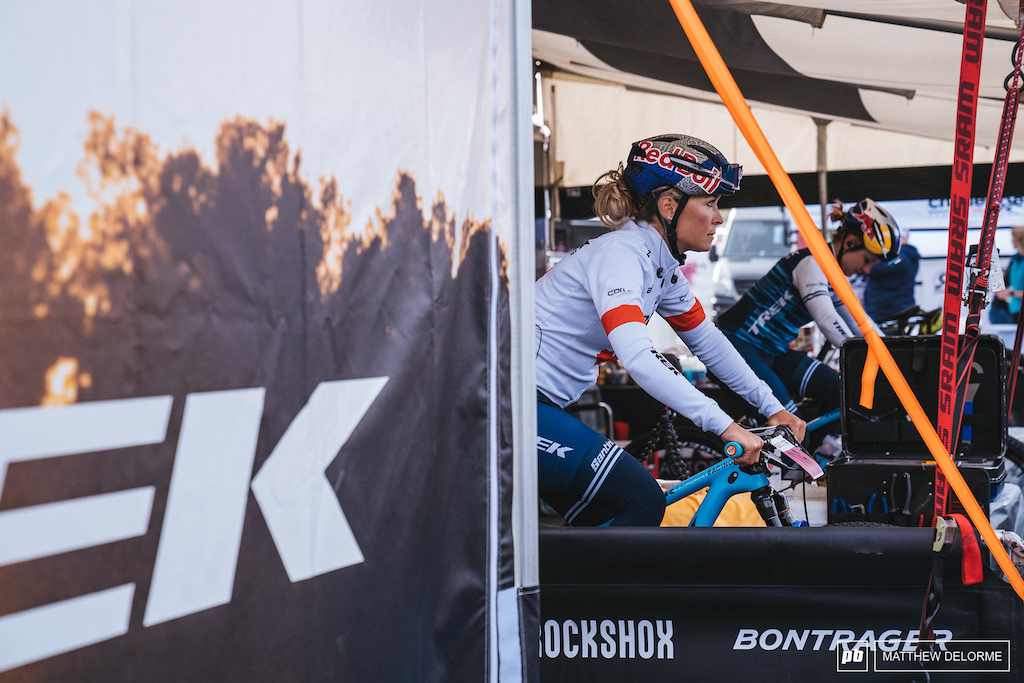 With the first round of the XC World Cup taking place in Albstadt this weekend that means the return of XCC, short track. The 20-minute pure power blast tends to favour strength instead of technical ability with riders like Annika Langvad normally taking the win. But current World Champion would show that she is carrying her speed from Lenzerheide last year as she took her first short track win in a photo finish with Jolanda Neff. Langvad would seem off the pace sitting back in fifth place, four seconds off Courtney.

In the Elite Men, Mathieu Van Der Poel would come from a successful offseason of CX and Road racing to take the win with Lars Forster right behind him. World Champion Nino Schurter would cross the line third followed quickly by Maxime Marotte and Henrique Avancini, all two seconds back from Van Der Poel.

Watch the replay on RedBull TV

Posted In:
Racing and Events Results

mnorris122 (May 17, 2019 at 11:12)
The guy just doesn't stop...literally the day after taking one of the greatest victories in the history of road cycling he was hanging out at his local BMX track talking to the kids and putting in a few laps.

Chridel (May 17, 2019 at 10:14)
Sorry but for me he is a sign that cycling is not ready to be sober. Winning CX, big spring classics with a dominace that is ridiculous and now going over to xc and dominating there again? Even Lance and Jan needed an off season, he seems to be from marvel universe or whatever else... From the past we sadly know what that often meant.

RedRedRe (May 17, 2019 at 10:25)
@Chridel: you are trying to reason about sport on the wrong site. Try with what color is the fork and if there is data to confirm something they can't understand in the first place.

jacksoneaker (May 17, 2019 at 10:31)
@RedRedRe: which color fork is the fastest? The blue SIDs didn’t really seem to help that much. Nino and Lars on yellow, Kate on pink.

jeroenk (May 17, 2019 at 10:40)
@Chridel: You are in a sad place. How would you feel if someone accused you of something you cannot prove does not exist? That is the mindf*ck with doping accusations: It's easy to create doubts from your keyboard and no need to back them up. The vaguest circumstantial evidence or consipiracy theory is enough. On the other hand it's impossible to prove something does not exist.


For anyone feeling the same way: VdP has been winning since he's capable of riding a bike. There is no magical pill he seems to have taken this year - he has simply shown himself on world tour road races for the first time. He was a junior world champ on the road. He has got the most well rounded handling skillset, a racers' mind and his genes are a mix of one of the best road stage racers of his time (his grandfather on his mothers' side) and a great one day road racer (his father). *Innocent until proven guilty"

He's allready drawing mainstream media attention to mountainbiking, because of his road racing exploits. I think it's a good thing for the sport. And MvdP does not care - he simply does what he likes.

number44 (May 17, 2019 at 10:59)
@Chridel: Not that there isn't doping, but 1-day races, hour long CX, and XC MTB are very different disciplines from 1-3 week tours over thousands of KM where doping is much more prevalent. You can succeed in these shorter races without all the EPO and it's little friends.

jeroenk (May 17, 2019 at 11:05)
@surfct: Lance simply repeated he never tested positive so much (among other evading answers) it started to become really obvious he was hiding something :-P

Look, there's no guarantees. There's no point aguing doping does not exist - it clearly does and in recent times too. Personally I enjoy all forms of cycling more without the cynicism. Let the testers do their work, or what's left is to suspend anyone who's winning because clearly their are on something or they would not be winning.

WAKIdesigns (May 17, 2019 at 14:16)
Well, so many victories before XC season starts means he may be burned out soon. Nobody cleans full season when you have folks like Nino to beat. Sorry. I am ready to eat my humble pie in few months. Until then I will focus on Womens field

jclnv (May 17, 2019 at 14:24)
Lance didn't have a world class road racer for a grandad and dad. Lance didn't win everything as a junior. Lance didn't post all his data post race for everyone to see. If anyone is going to a legit mutant it's MvdP. That said Nino is absolutely flying. He's not exactly Mr Fast Twitch but MvdP couldn't gap him when he attacked. Plus Nino took about 10 bike lengths out of MvdP on one tiny descent. He's technically on another level to even MvdP

clink83 (May 17, 2019 at 21:15)
@jeroenk: to be fair endurance only comes from mothers and grandmother's, men don't contribute anything in regards to mitochondria.

Chridel (May 17, 2019 at 22:19)
@bohns1: I think he can, I'm not saying he isn't one of the most talented riders out there, he would smash most of us in whistler on his xc bike. And anyone who has done a cx race in the mud knows how much skill is needed to ride thouse courses without mistakes with a heart rate that makes it hard to concentrate. I'm just saying it's a bit to much when it comes to endurance.

Chridel (May 17, 2019 at 22:32)
@number44: sorry but have you done a road race with way more than 200km? The tour is a hard thing but there is a reason that for many riders robaix oder Flandres are the crown of cycling. I do not feel in the position to judge what is harder to do but must of my races where sub 150km before I swapt my road rig for a proper Parkbike.

mtbikeaddict (May 17, 2019 at 10:10)
Could someone please explain this short track thing to me? Forgive the noob question; I mostly followed EWS/DH... It apparently determines the start order, so it's like qualifying, but there's not all that many entries and I didn't see some big names, so is it more like timed training, or a combination, or...?

There are UCI points to be had towards the overall, and the top 24 riders in the short track are seeded in the first three rows in Sunday's XCO race. The field is limited to 40 so not everyone gets the chance to participate in it.

mtbikeaddict (May 17, 2019 at 10:56)
@sarahmoore: Ah, so everyone on the start list should start? (Obviously excluding something like injury)

Am I a mtbikeaddict? Heck yes! If I'm honest with myself, excluding the constant opportunistic trials stuff whatever its called goofing off, most of my riding is "xc"/"trail". But the few times I've been able to ride park/freeride... Adrenaline junkie lol. That's my aspirational side. Get on Pinkbike, see coverage of Rampage/EWS/DH/CWX etc... Guys riding down and off crazy stuff, doing insane things... That's fun, partly because it's not my normal and I'll likely never be at that level lol. Xc just wasn't as captivating.

mtbikeaddict (May 17, 2019 at 11:44)
@clink83: Oh boy. Thanks for trying to help. Sorry I'm hopeless, but if there is one thing that i'd understand least, road racing is it. That was the worst possible help lol.

mtbikeaddict (May 17, 2019 at 12:48)
@endlessblockades: Oh absolutely not! Sorry if I came off that way, that's exactly the sort of goofy thing that I might post lol, I knew exactly what you were doing! I was just honestly at a loss as to what to reply, if at all... got a taste of my own medicine, well done. No hard feelings.

yupstate (May 18, 2019 at 18:56)
Just a US thing here, but props to Stan's and Pivot for sponsoring the US talent. Not really massive brands like Specialized or Trek yet they have several of the top US finishers Male and Female.

frenchfriedfun (May 17, 2019 at 10:23)
Is Jaroslav Kulhavi racing XCO Sunday or should I update my Fantasy team

dougfs (May 18, 2019 at 3:41)
Well done to all the Pinkbike Staff for showing results without using Scribd. This is appreciated by your readers.

RoadRunner13 (May 18, 2019 at 4:38)
Remember that Nino Schurter tried once road cycling at pro level on Tour de Romandie. He was just rubbish...
Below threshold threads are hidden

captainderp (May 17, 2019 at 10:53)
there's been a lot of criticism of the changes made to the Albstadt course these year (and it was probably the least technical course to begin with), coming from the racers themselves. www.pinkbike.com/news/anton-cooper-blasts-albstadt-world-cup-course-for-lack-of-technicality.html
Post a Comment