Review: The Bontrager Rally MIPS Helmet Is The Volvo Wagon Of Helmets 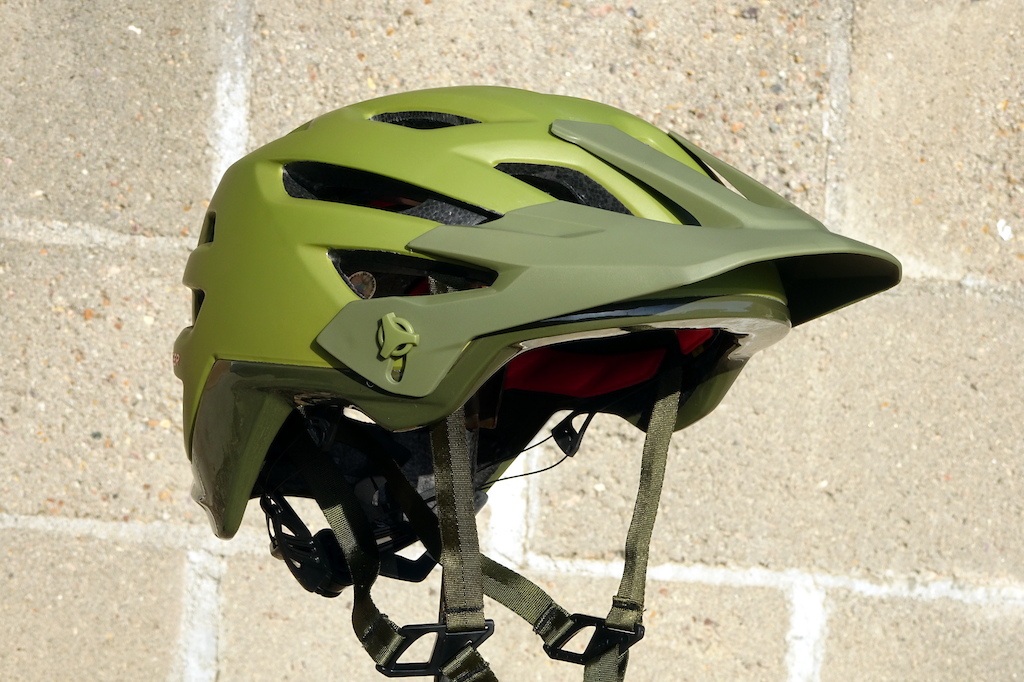 Bontrager's Rally MIPS helmet ticks all the boxes that a top-drawer half-shell all-mountain helmet needs. Its EPS-foam shell incorporates a strength-boosting molded-in skeleton that allows for more and larger vents. The visor ("peak" to our UK friends) slides high enough to stow your goggles or glasses according to current fashion, and fixed ear webs ensure that you'll be wearing your lid at the approved angle. Weight is around 380 grams and it looks.... pretty good.

Inside, the Rally MIPS features, as you may have guessed, the now-famous plastic brain-saver-beanie, lined with a well-designed anti-microbial pad system. The one-handed headband adjustment utilizes Boa string-winder technology. The head-form shape is a rounded oval, similar to Troy Lee's and Bell's half shells, and the sizing feels similar too. Sizes are small, medium. large and X-large.
Bontrager Rally MIPS Helmet 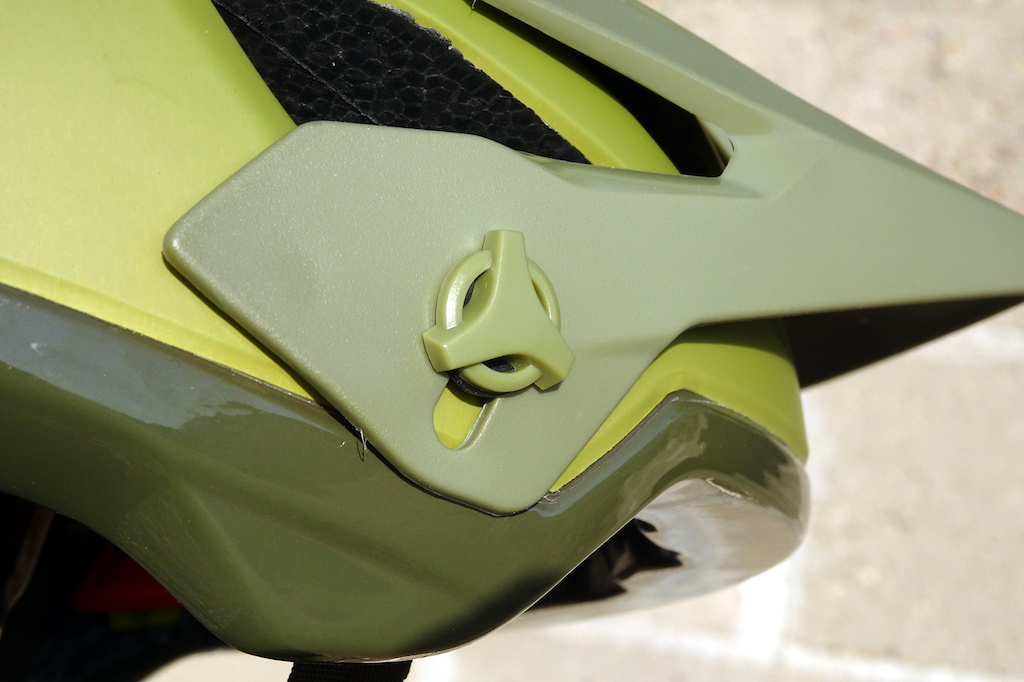 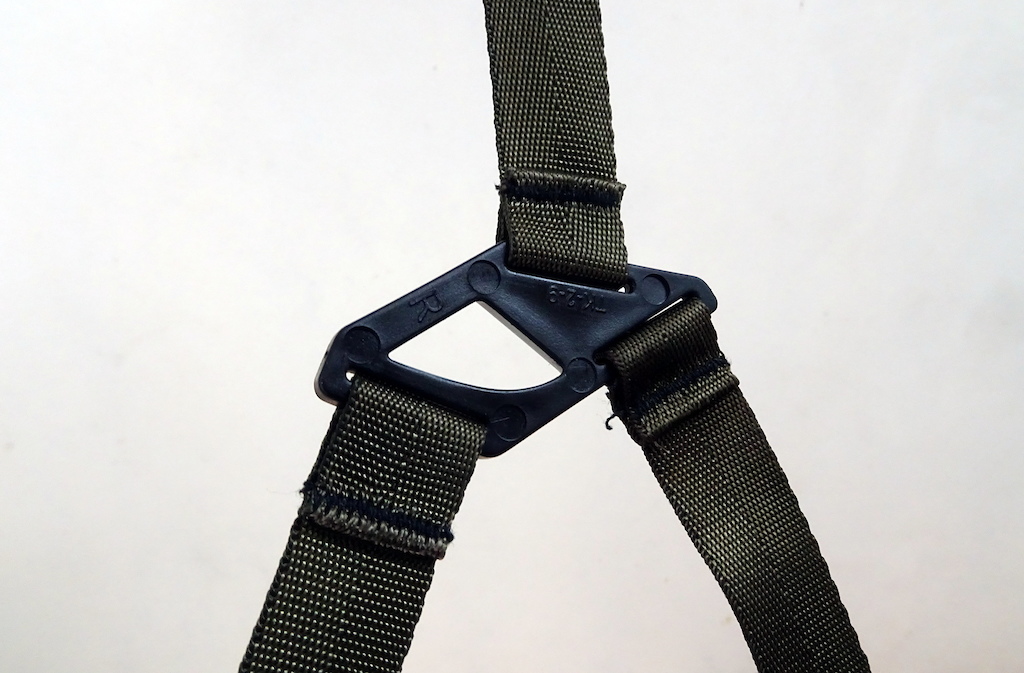 Wide buckles guide the webbing around the ears. 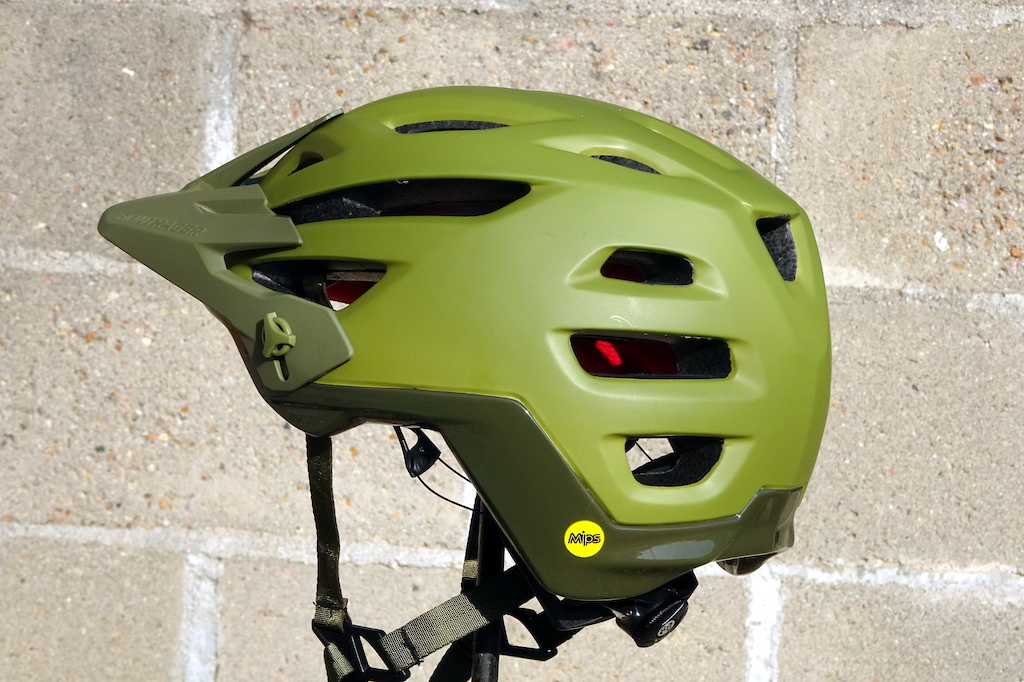 The underside has a nice wrap-around shell. 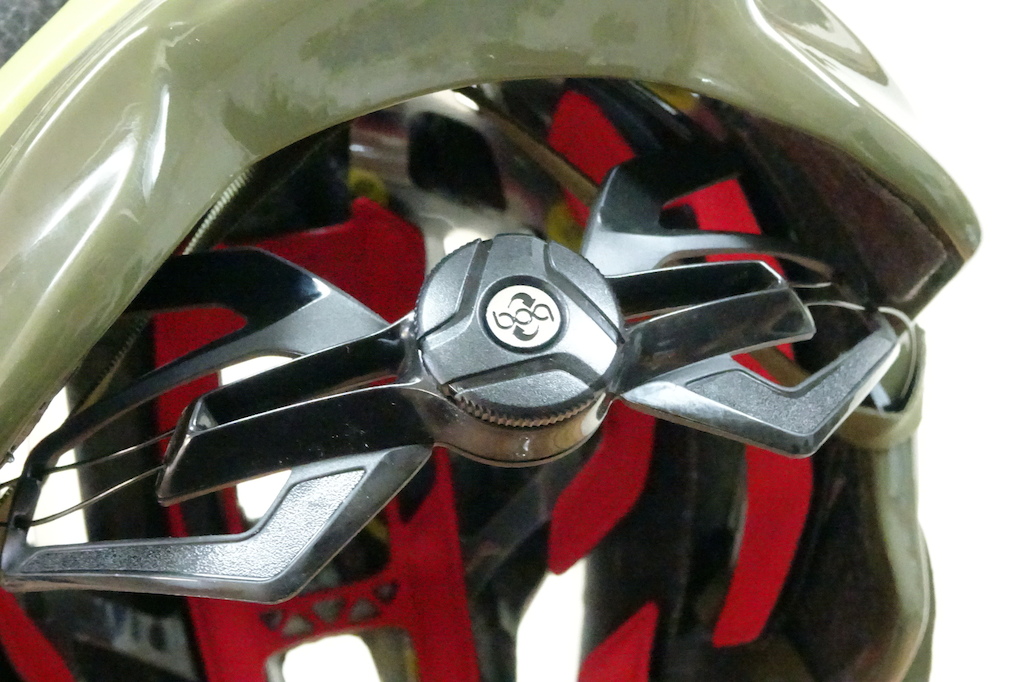 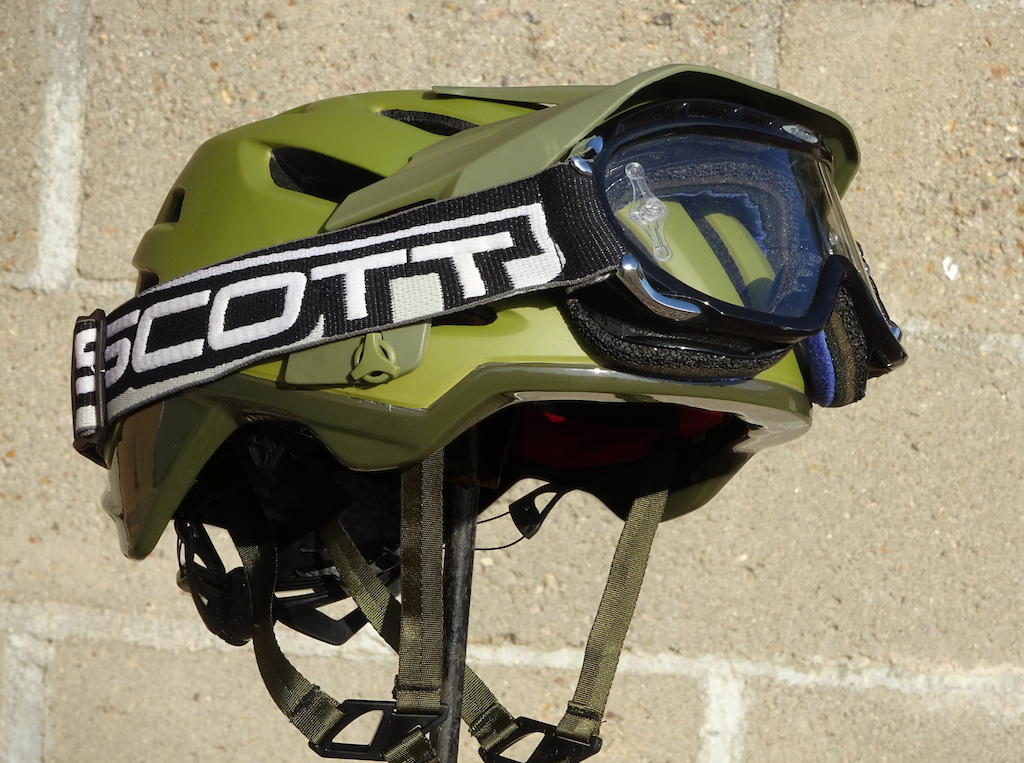 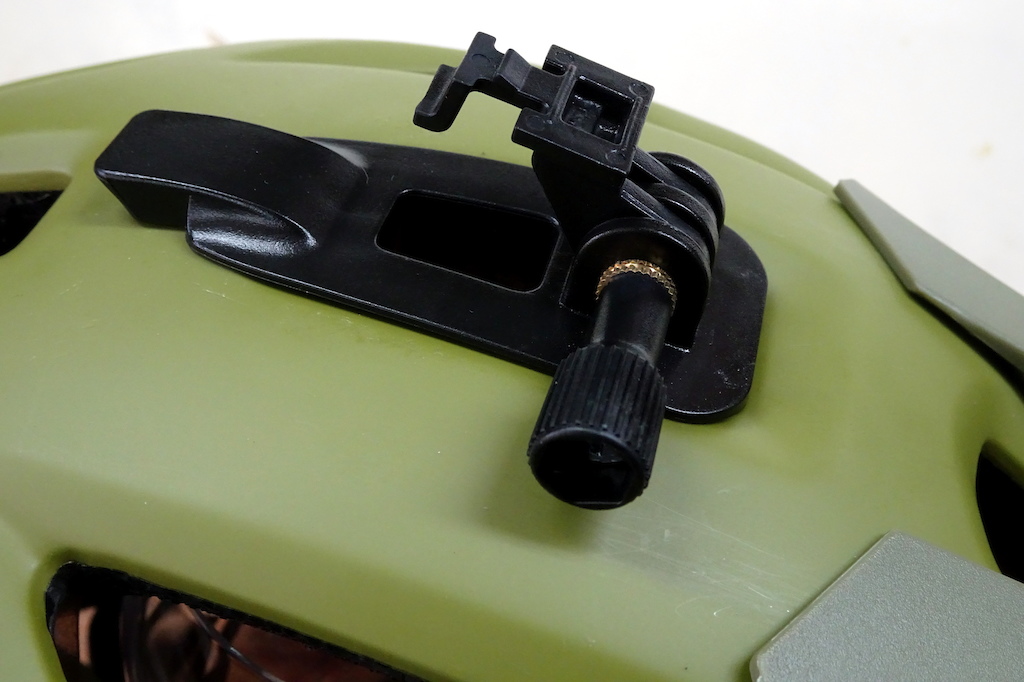 Up top, night riders will like Bontrager's "Blendr" magnetic-latching accessory mount. The well-built, hinged pad has a tongue that slips inside one edge of the helmet's central vent, while a powerful magnet fixes the opposite end. The idea is that the Blendr and helmet will part company during an impact to reduce the likelihood of rotational head trauma. Blendr mounts have a friction adjustment dial and fit GoPro cameras, as well as Bontrager's LED lights. The Blendr is included in the Rally MIPS' $140 USD MSRP. 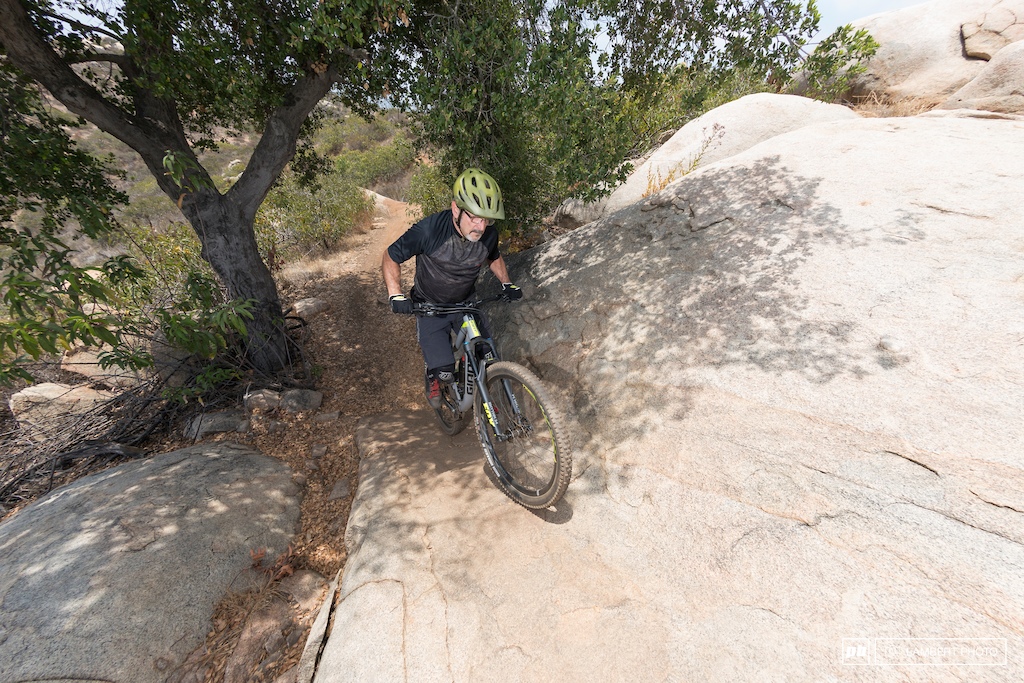 Fussing with thin webbing, clips and buckles ranks low on my list of riding chores, so I was happy that the Bontrager lid was as fuss free as any half-shell helmet I can remember wearing in the past couple of years. The only real adjustment is the chin strap buckle. because the ear-straps are spread wide by a special buckle that eliminates interference. The Boa headband adjustment was equally simple and effective.

Most visors use a simple friction washer at the pivot location to fix its position. Bontrager's lid pivots an inch behind a radiused slot that limits the angular travel of the visor and provides a more consistent friction adjustment. As mentioned earlier, the visor tilts high enough to stash your goggles on the helmet below it, which would have come in handy during transfer stages of the enduro races I never did during testing. At its lowest angle, the visor stops where the sculpted lines of the helmet and visor pair up, but not a degree below, so it couldn't drop low enough to effectively ward off the sun when it was low in the sky - which was the Rally MIP's only disappointment.

Record temperatures in the Southwestern USA provided ample opportunity to evaluate the Rally helmet's ventilation and sweat-directing features. I'd place its cooling well above a Troy Lee Designs A2, but below the Leatt DBX that I use most often for hot weather riding. In its favor, Bontrager's MIPS bonnet is filled with cut-outs that line up with deep ventilation channels inside the shell. Breezy? I could feel air moving around, but nothing feels great upwards of 40C, and I found the Bontrager's cooling to be sufficient - which speaks well for the design.

Thin as it may have been, the padding that lines the clear plastic MIPS dome provided just enough separation to eliminate the toaster-effect that shiny plastic has when it comes in direct contact with hot flesh. The shape and distribution of the padding directed most sweat away from my glasses, which was a major plus. I could blast into a tricky descent after a prolonged climb without blurred vision.

I did not try a GoPro on the Blendr accessory mount, but I did spend a little time with a Bontrager light attached. There were no wiggles and no unplanned ejects , so I call that a win. The magnetic latch is far more secure than I imagined it could be. I'd wager the chances that you'd arrive at the bottom 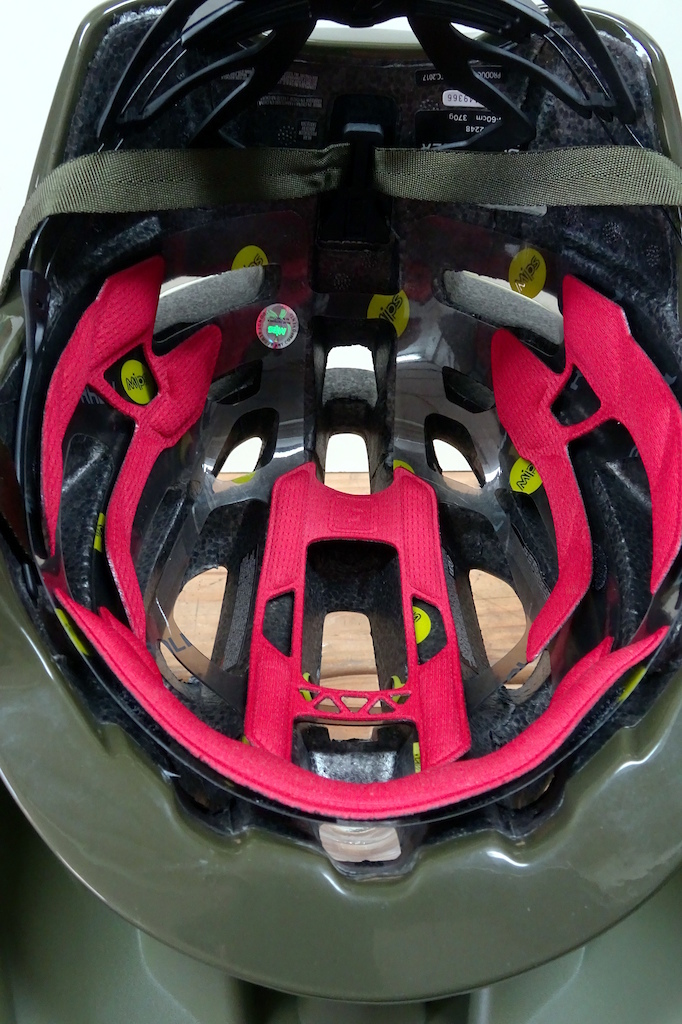 Generous cutouts in the clear-plastic MIPS skull-cap encourage ventilation. The removable padding is thin, but comfortable.
of a crazy descent with your $350 camera attached to your helmet would be 99.73 percent. You'd have to crash or smash through stiff branches to dislodge it. If you did hit something hard enough to knock it off, you'd definitely remember exactly where to look for it.

More images to be found in the review gallery.

2bigwheels (Jul 23, 2018 at 12:04)
Great helmet. Currently on my second one of these. Doesnt have the best airflow but never gets super super hot. The 1 year free crash replacement is nice if you ride bikes like I do... 50% on the bike 50% in the bushes somewhere.

Its also hella comfy so that an extra bonus.

whitebirdfeathers (Jul 23, 2018 at 14:48)
I have one as well. I crashed it pretty hard after six months of use. They sent me a replacement with very few questions asked. Great customer service and a really comfortable helmet.

eastsideride (Jul 23, 2018 at 14:51)
@whitebirdfeathers: And just one guy does all the crash replacement. Kudos to my man Luke!

Seawild66 (Jul 23, 2018 at 17:21)
@sngltrkmnd: Pulling good paint ideas from Toyota Trucks? Hopefully next year metallic sparkle paints will be back in vogue. I'd do like some color, but the latest periwinkle and fuchsia fashions not so much. Don't live close enough to Sna Fren.

wibblywobbly (Jul 23, 2018 at 12:56)
Usually not a fan of Bontrager stuff, but I would wear this helmet in a second. Saw a buddy of mine wash out in a berm and slam the side of his head in to a tree while wearing this helmet.

He was moving fast and it was an extremely violent crash. He popped up instantly and made a joke.

Plus it’s comfortable to wear and you can get them cheap.

Corinthian (Jul 23, 2018 at 13:01)
Bought one a few months ago and I'm really, really pleased with it. I've got aleopecia (so no eyebrows / lashes etc) meaning good ventilation and a lack of stinging sweat in my eyes is really valuable... Oh, and the 12 month FOC crash replacement scheme is a nice touch.

apartmentwhale (Jul 24, 2018 at 8:30)
Isn't it more functional for a helmet to have rounded edges? A rounded edge will glance off the ground/object where a sharp edge (roadie helmets) is going to stick like a lawn dart. MIPS PLUS rounded edges seems like the way to go to reduce the trauma from rotational forces.

jcav5 (Jul 24, 2018 at 9:09)
This helmet looks pretty good but I still think MIPS is snake oil... the testing they did made some pretty grave assumptions about the head to helmet interface, the data they released is pretty vague, and the price point is a little bit extreme.

If safety is your main concern, I still think the Kali is the way to go...they are more expensive (my interceptor cost around $200) but they are one of the few that have actually put out hard data and plots with actual values. Plus they have a lifetime, free crash replacement program... hard to beat that...

OrangeGoblin (Jul 24, 2018 at 1:11)
Still can't believe its taking helmet designers so long to properly integrate go-pro/helmet light mounts on helmets. This looks like a pretty perfect execution. I'm still stuck with a shitty velcro strap on my A1. Might be time for an upgrade - shame i loath the look of this helmet. :-/

Mac1987 (Jul 24, 2018 at 14:35)
Too bad it doesn't fit my headshape. After trying 10 different trail helmets, I could choose out of the overwhelming number of 1 (!!!) helmet that actually fitted my head. It seemed like all major brands use roughly the same shape helmet. Fortunately for me, Scott was the exception to the rule with the Vivo Plus MIPS helmet.

vtracer (Jul 23, 2018 at 14:48)
Nice to see that they offer a crash replacement within the first year. It would be nice if helmets rated for multiple impacts with EPP foam had caught on in mountain biking.

mrback1968 (Jul 25, 2018 at 2:45)
got one of these, a great helmet which is really comfy. I think the pads are a tad too thin tho, they dont wick sweat away as good as I would like but prob just due to the crazy hot weather at the minute.

bubbrubb (Jul 23, 2018 at 22:00)
Hanging from it’s strap, then the phot was flipped upside down. Why break out photoshop? Friggin millennials.

sngltrkmnd (Jul 23, 2018 at 14:58)
Looks sharp! I really like the magnetic mount - my primary concern w fixed mounts on my MIPS Giro helmet is a neck injury.

Victoriamike (Jul 23, 2018 at 22:28)
Had the previous version of this helmet and I have to say the thing I loved the most about it was the light mount.

toddball (Jul 23, 2018 at 12:57)
More or less back and side coverage than a Giro Feature (or Chronicle, or whatever it's called now)? I apparently have a tall head and most helmets just perch on top.
Below threshold threads are hidden

msusic (Jul 23, 2018 at 12:37)
Specialized Ambush is the most comfortable and best ventilated helmet of this type that I've used.