With the rise of extreme trail riding among the masses, or at least a perceived increase, there’s a whole host of gear coming out that uses downhill inspired designs mixed with features aimed specifically at riders looking for lighter weight options. One such area is with kneepads. Full armour’s hardly the top ticket for all day riding, and on all-day rides even knee pads can be more hassle than they’re worth if there’s lots of climbing involved. Sure, you can take them on and off, but your buddies won’t be thanking you every time they have to sit around and wait for you to get yourself ready at the top and bottom of every climb. Enter centre stage the AMX Zipper from O’Neal, which gets around this problem with the addition of a zip so you can take them on and off easily without the need for shoe removal. To ensure that the zip doesn’t cause any issues with movement it’s actually elasticated and stretches up to 10% to help keep the shape of the pad. Using the same visco-elastic Sas-Tec SC1 as their gravity Sinner pad, the actual padding is low profile yet still offers significant impact force dissipation while minimising any impingement on the movement of your knee when pedalling. Shaped to fit a bent knee, there are twin Velcro straps that can be set and then left as neither crosses over the zip which makes it quicker and easier to get them on and in a comfortable position each time you use them. Construction is light too, coming in at 356g a pair for our large size, and features a tough Cordura front impact face with soft terry towel against your knee, and a thin neoprene backing with silicone grip strips top and bottom to hold everything in place. The Sas-Tec insert is also removable to make for easier washing without degrading its performance over time. MSRP €99.99, www.oneal-europe.com

The AMX Zipper knee pads use Sas-Tec padding to help dissipate any impacts that may occur.

Burgtec were an early adopter of the wide bar movement when it originally kicked off on the World Cup scene. That spawned their original scandium Ride Wide bar, but a few years down the line though and 750mm seems just a bit too xc for many, which is exactly why the new 780mm Ridewider is now available. It's as wide as the majority of riders need, but as there are accurately etched cut marks on the aluminum bar it's easy to do some trimming should they be a little too wide out the box. As bars get wider the sweep will generally increase to compensate for the arc your hands follow as they pivot from your shoulders. Therefore, nine degrees of back sweep is mated to four degrees of up sweep and creates a comfortable position for your hands given the greater width. Given that the trend for flat bars seems to have moved away as bike geometry has caught up Burgtec expect the 30mm rise bar to be their biggest seller to downhillers. That said, they still see merit in the 15mm rise bar for those who want a lower front end, and those who want to use them on a trail bike. It was this rise we opted for which came in at a true weight of 315g and suited our riding perfectly. MSRP £64.99 GBP. www.burgtec.co.uk

Burgtec has answered the call for wider bars with their 780mm Ridewider aluminum offering.

Scott Sports have been around for years in the optics market although they seem to curry most favour with the motocross contingent. However, their latest top end offering may just be the goggle to bring them further into the MTB world as the Tyrant MX comes with a number of great features that make them a great choice for the pedal powered market. Anti-fog lenses are expected on all but the most basic goggles these days and so a clear lens with the coating on it comes as no surprise here. Scott also feature their patented Revolutionary Air Management (RAM) venting on the Tyrant, and this works by having forward facing vents on top of the frame which push the air through 90 degrees to direct directly down over the inner surface of the lens. In much the same way the screen blower works on a car, it helps prevent fogging, in conjunction with the coated lens. The 3.2 face foam is a triple layer foam on the upper half of the goggle, mated to a dual layer on the lower half. While both feature the same soft felt layer against your skin, underpinned by soft open cell foam, the upper half also has a 5mm thick band of much denser foam between that and the goggle frame itself to help with venting and to make for a comfortable fit against your forehead. Finally, the unique feature on these goggles is the Fit System, which allows users to dial in the shape of the goggle’s frame to suit their face. Four positions can be dialled in using the supplied plastic key basically a plastic screwdriver and is matched with the adjustable (and removable) nose guard. MSRP £60GBP, www. Scott-Sports.com 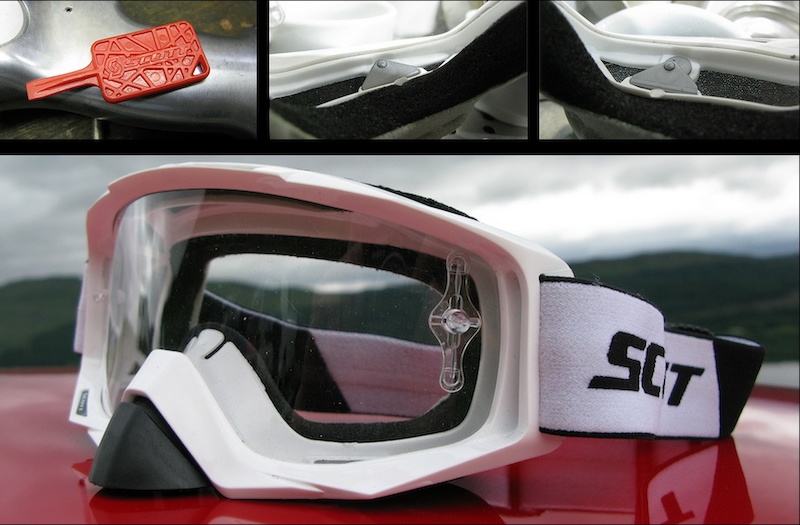 csquared253 (Mar 14, 2014 at 0:21)
It's crazy to think how big Scott really is. Mtb, road biking, moto, skiing/snowboarding.....damn a finger in every pie and they still manage to make quality products on every front.

ShempHoward (Mar 14, 2014 at 5:48)
You can't beat Scott goggles for price to quality ratio. No clue what the reporter was talking about, we have been using Scotts for DH since the 90's. $30 for good pair of Scotts or $120 for crappy "MTB" goggles whatever that means.

muchentuchen (Mar 14, 2014 at 6:46)
Was REALLY tempted to get Tyrants instead of Oakleys, but then I have not been riding a lot these days so no new pair-so far.

mentalhead (Mar 14, 2014 at 7:46)
Yeah, but they ain't best in none of these, so why should we care? They have great goggles however and their goggles are definitely unbeatable in price to quality ratio. I cannot say the same for their bikes though.

taskmgr (Mar 14, 2014 at 9:17)
I had a pair of scotts, the fogged up and were pretty unsatisfactory so I went back to smith. I have the scotts kicking around as a reminder. they were about $50 (not the cheapest of the cheap) but very dissapointed to say the least.

bigtim (Mar 14, 2014 at 5:28)
Hello? Is no one noticing... a zip... on knee guards?! That is genius! I get fed up having to take shoes off to get pads on and off before and after a ride. Also will stop that problem when you get home from a ride and have to scrape all the mud off your legs with the pads which then gets spread all over the floor before you get a chance to jump in the shower.

Been using them for a while now and they are brilliant.

meSSican (Mar 14, 2014 at 5:57)
Switched from Oakley Crowbars to Scott Tyrant goggles last season and am completely satisfied. The Fit system works well and very comfortable. Plus chicks dig them so there's that....

Guess they were afraid of using the 'E" word

markhouse (Mar 14, 2014 at 0:55)
I use the Scott goggles and they are awesome really good fit and if they fog as soon as you start to move even at a slow place they clear.

kieronash (Mar 14, 2014 at 2:56)
I've got the old RW150mm bars, love them and would buy the new ones (and cut them down) when I need replacements. Agree with the anodising and graphics being soft, you can hardly make out the logos on mine.
I'm keen to try their pedals too but wouldn't swap out my point 1 stem any time soon.

lalena (Mar 14, 2014 at 12:09)
When it comes to goggle reviews, I would like to see where the goggles were tested. I've gone through so many goggles that claim they have excellent anti-fog capabilities. The only goggles that I've kept fog free so far during North Shore winter rides, are the ones from Ryders.

jedrzeja (Mar 14, 2014 at 14:07)
I also thought to stay with old width and whenever I buy something newer, even if it is wider, I always promise myself to consider cutting down the ends. The fact is that my shoulders are over 700mm wide and I got to like wide grip to stay in control. I'm lacking any feedback since even the widest bar I grip the widest way possible. My hands always cover barends. This way it is easier for me to assess a possibility of going through. Whenever I hit something it is always with my last two small fingers.

wayfarersall (Mar 14, 2014 at 5:59)
Already running those Burgtec bars. Absolutely love them and a really nice company to deal with as well.

LiquidSpin (Mar 14, 2014 at 10:37)
I love my Scott Tyrants I got last year. That little key that comes with the goggles to adjust the fit is SO damn awesome. They should put this on every goggle.

slips91 (Mar 14, 2014 at 18:46)
Just got the Scott tyrant goggles today (lime green) and have to say they are the nicest and best fitting goggles I have ever owned or tried on

stonechucker (Mar 16, 2014 at 18:49)
The O’Neal AMX Zipper knee pads are very hard to find from a North American supplier. I've been looking for quite a while. Recommendations anyone?

gavisasav (Mar 16, 2014 at 20:43)
its like advertising a dh bike for lightness when its like 35 pounds i guess its kinda wide but there are many other bars offered even wider