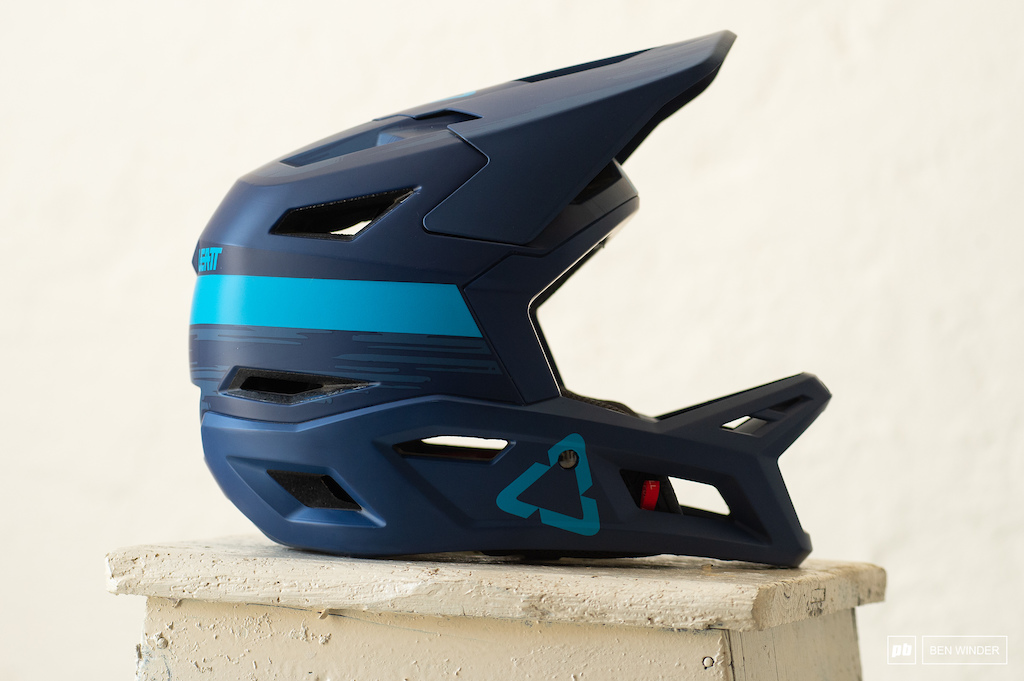 Leatt were originally a neck brace manufacturer, but have been working hard on their complete mountain bike protection and apparel range in recent years, and more specifically their helmets. The just-released DBX 4.0 is their new enduro and downhill helmet, which is certified to full downhill safety standards, but lighter and better ventilated than anything they have produced before.

There has been an influx of helmets aimed at enduro racing introduced recently, and the DBX 4.0 aims to be top of the class, with ventilation and safety being at the forefront during its development.

It is offered in four sizes, going from S up to XL, to fit head circumferences from 55cm to 62cm. Four color options are offered, with these being Steel, Ruby, Ink (reviewed here) and Black. Retail price is $230 USD and can be bought right now. It will be available in European stores shortly. 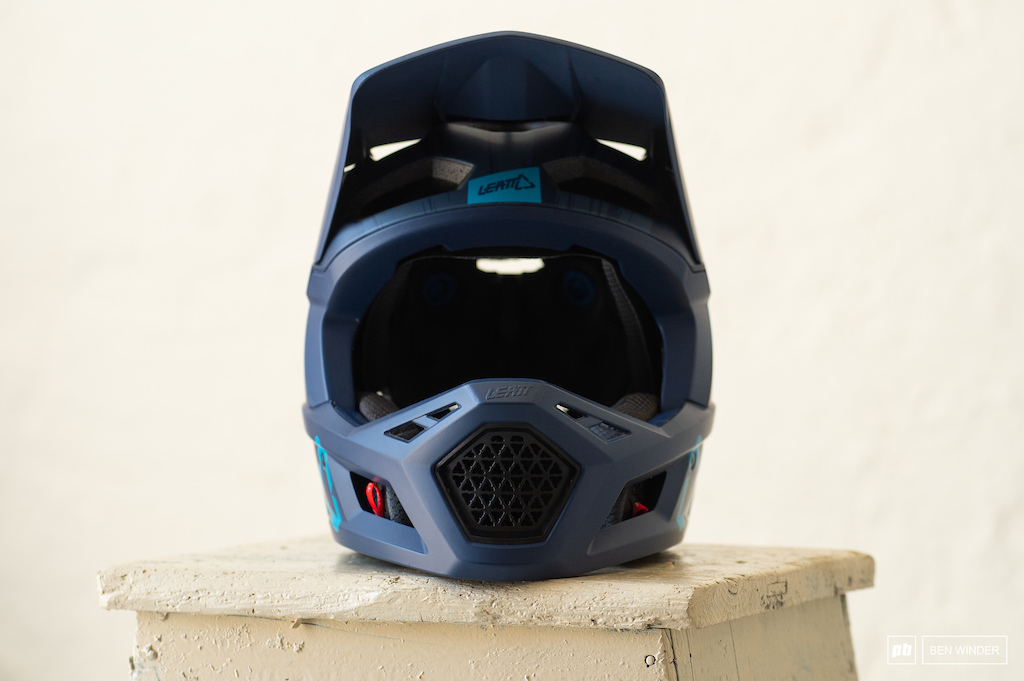 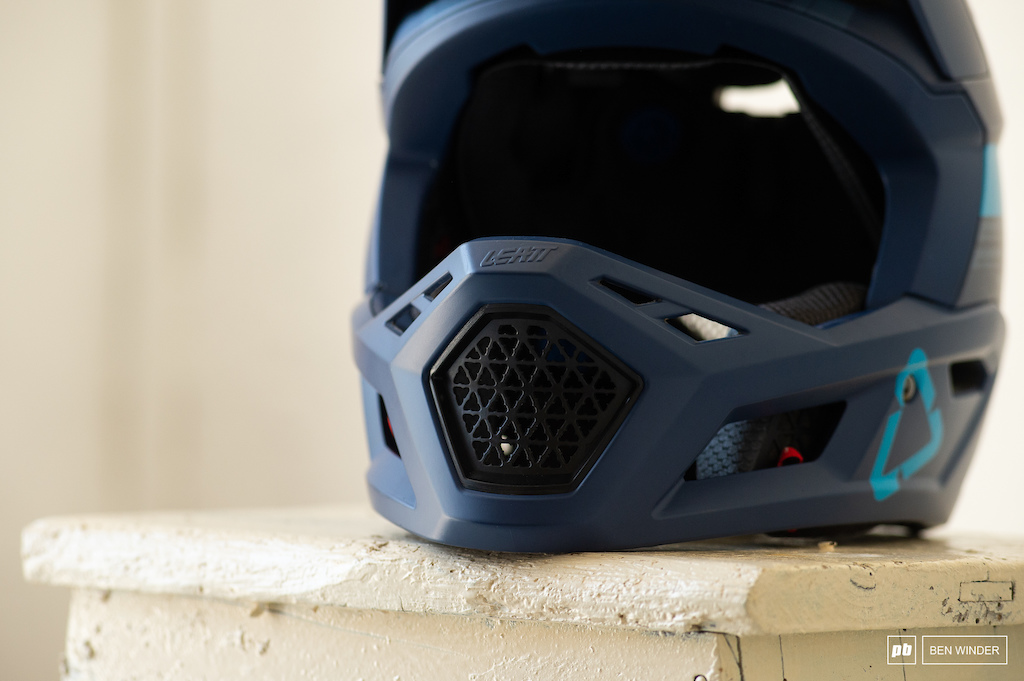 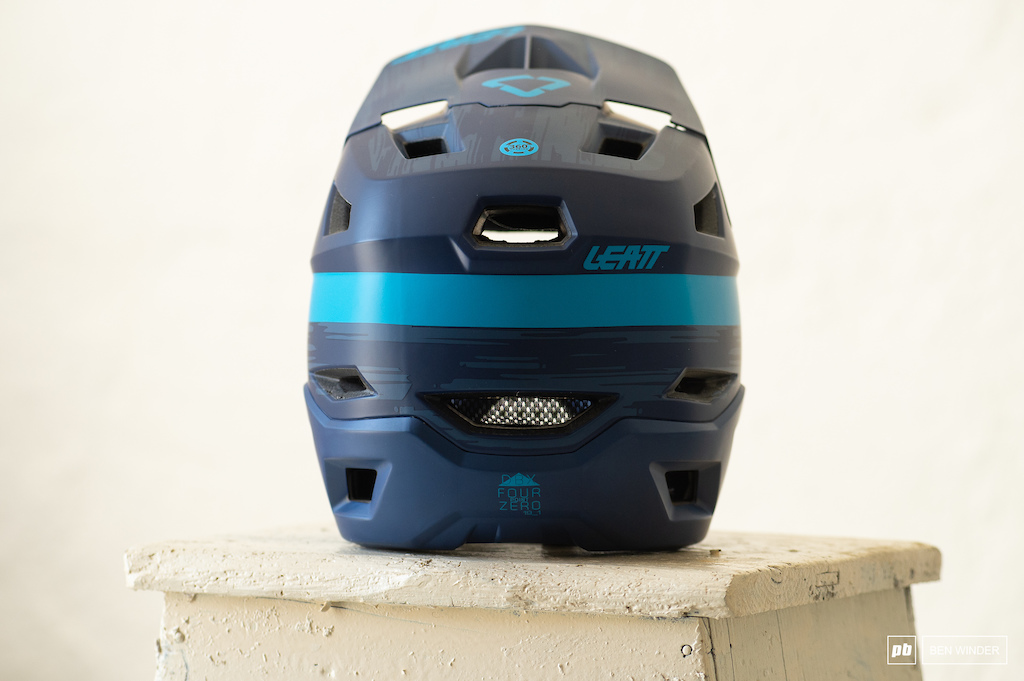 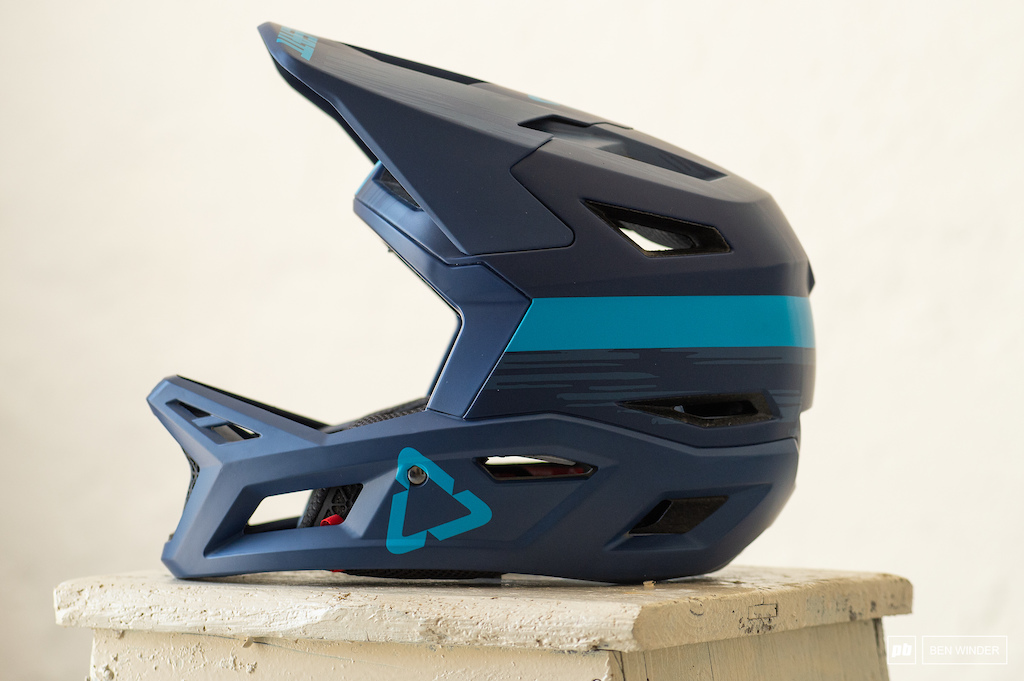 The profile of the DBX 4.0 is similar to Leatt's other downhill helmets, but with more material cut away for ventilation, and a more angled and edgy style. It features Leatt's 360° Turbine Technology, which uses 10 small viscoelastic discs that are intended to absorb rotational acceleration and low-speed impacts. A combination of EPS and EPP impact foam has also been used to provide additional impact protection against both small and large impacts. Other safety features that are always good to see are a breakaway peak and neck brace compatibility, which isn't exactly surprising to see in a full face helmet from Leatt.

With an actual weight of 880g for a size medium, including the mouthpiece, the DBX is heavier than the TLD Stage (685g, M, actual) and the Fox ProFrame (750g, M, claimed), and a similar weight to the Bell Super DH (850g, M, claimed), though the Bell has added weight from the connections for the removable chin bar. However, some of the extra weight is from the 360º Turbines, which are one of the few rotational protection systems that are also designed to help to protect against oblique impacts and add low-speed impact absorption. MIPS, for example, doesn't add any absorption protection.

Other features include the Fidlock magnetic closure, and a removable and washable helmet liner. The 'piece de resistance', and a feature I haven't seen before, is the removable mouthpiece grill, which can be removed for hotter rides with more pedaling, and returned when you want more protection or to keep mud, dust, and flies out of your mouth. The only feature some riders might like to see, but isn't present, is a POV camera mount. However, with lots of riders placing the camera under their peak, this might not be a problem. 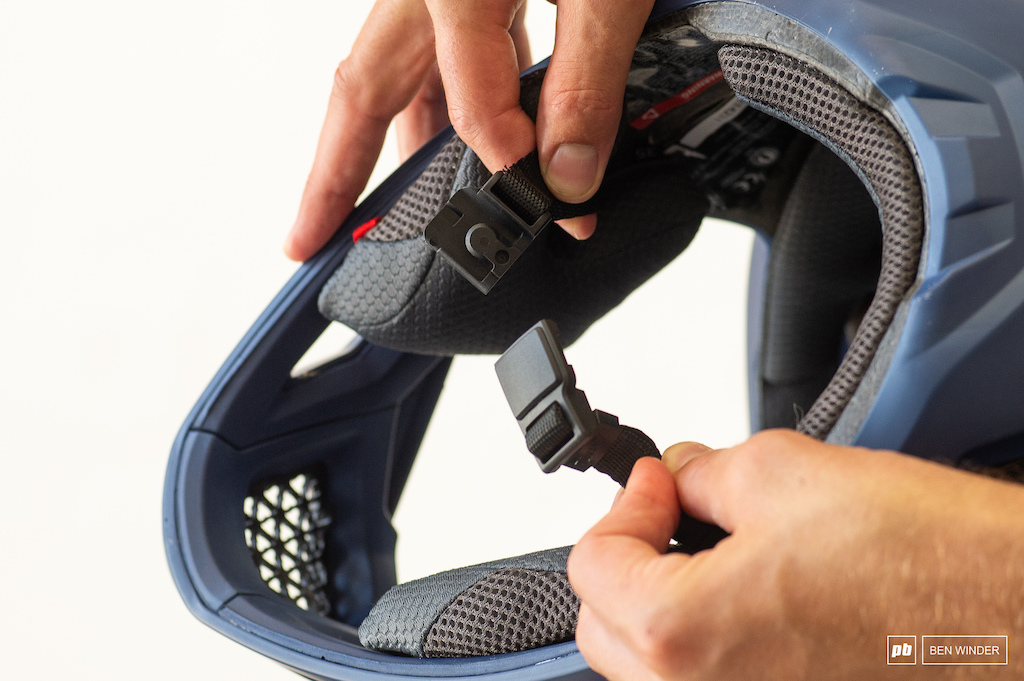 The Fidlock magnetic buckle allows for easy one-handed operation while still being secure. 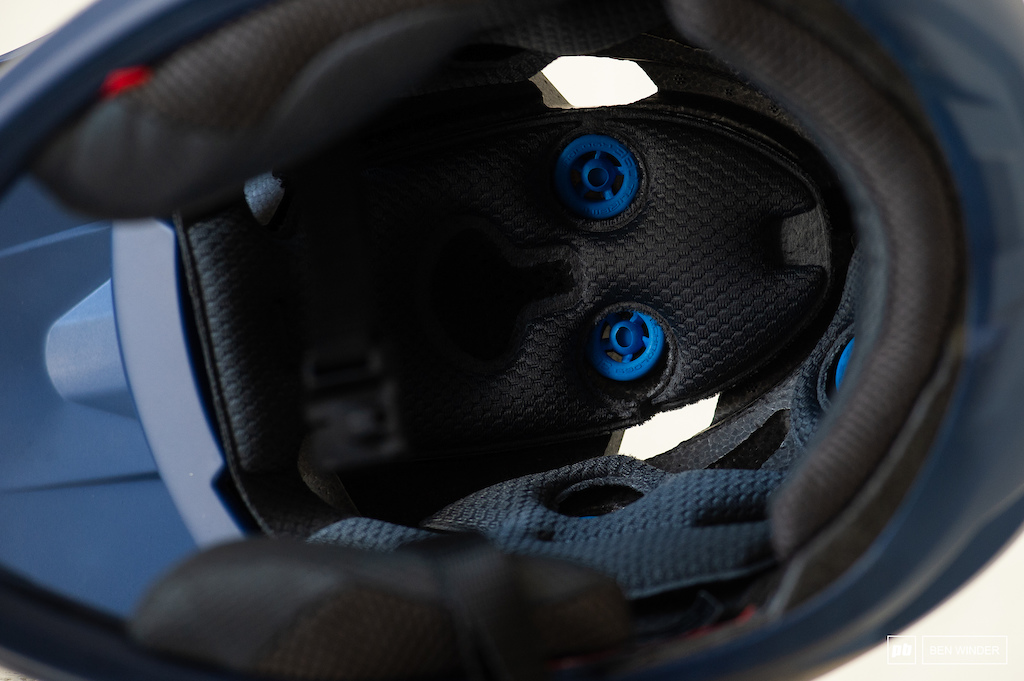 Those blue viscoelastic discs make up the 360° Turbine system

I tested the size medium and it offered a great fit, and the magnetic Fidlock buckle is the easiest on the market to connect as it guides itself into place; it can even be done with one hand while riding. Generally, I prefer a classic double-D with a full face, but the Fidlock is a suitable option for enduro riding.

The removable mouthpiece/grill is a great option and a feature that is not an option from two of its main competitors, the Fox ProFrame and TLD Stage. For dry days you should be OK, and be able to breathe more easily, but if it's muddy or dusty, or don't like inhaling flies, you can pop the plastic plug in and get some extra protection.

The lack of peak adjustment might frustrate some riders; it was just in the top of my view when riding. I would like the option to move it a few millimeters higher. The lack of adjustment also means there's no option for storing your goggles underneath it. This breakaway peak also developed a slight rattle on bumpy sections after I had popped it in and out a couple of times to see how easy it would break away. This could be solved with some rubber tape. The breakaway force needed to remove the peak was low when pushing downwards, but took a decent amount of force upwards. Catching a small branch could still pull your head back.

Compared to the TLD Stage, the DBX helmet feels more secure as there is more padding and the shell is more closed. The cheek pads are also bigger and thicker, which make it a little harder to breathe on those "200-bpm, mouth open, feel like I am going to die" sprints at the end of a stage. The area around the ears is also more closed, which cuts out some wind noise. Of course, the downside of this is that the DBX weighs nearly 200g more than the Stage.

The DBX 4.0 bridges the gap between the super light TLD Stage, Fox Proframe and a full-on downhill lid. The DBX is more towards the downhill side of the spectrum, but still offers great ventilation and a competitive weight.

Boardlife69 (Nov 29, 2018 at 1:58)
Waiting for the DBI model. The difference between the DBX and DBI is a removable mouth grill for Direct Beer Ingestion technology.

whateversm (Nov 29, 2018 at 16:49)
I had one of the worst crashes of my life at the end of the summer.. I was luckily wearing this helmet for the 1st ride and only ride i had it. I pile drived my head so hard i broke 3 vertebrae in my upper back and shattered the helmet. Now although this sounds bad (and it was) I never blacked out and did not show any major signs of concussion. I believe the 360 turbines did what they claimed. I was also not wearing a neck brace and tucked my chin to avoid a scorpion and i also believe the chin bar bottoming out on my shoulder probably saved me from breaking my neck instead of my back. So I'll be buying another one.

AyJayDoubleyou (Nov 29, 2018 at 4:31)
"Generally, I prefer a classic double-D with a full face, but the Fidlock is a suitable option for enduro riding."
To me, this is backwards. Enduro you will be wearing it all day. DH, its on and off as you push up, or get in the uplift vehicle. Nothing is more annoying at a DH spot than someone who waits for a clear run, and only then decides to put on their helmet and goggles and takes a whole minute over it.

theboaz (Nov 29, 2018 at 9:22)
is there any data to suggest that Fidlock might open in a crash, while the D rings will keep you safe? I am not going to buy a MTB helmet that does not have a fidlock, releasing those D rings with gloves on doesn't always go smooth. Does having an easier mechanism to operate reduce the manliness of the product?

jibb (Nov 29, 2018 at 12:27)
All of the vent cut outs of reasonable size increase the likelihood of the helmet getting awkwardly hung up I’d imagine... which doesn’t sell the idea to me

jbeanbuyer (Nov 30, 2018 at 5:39)
This looks good, though for most people that don't race professionally, the DBX 3.0 with the removable chin guard is a great option!

It's the same as a 'peak' on a baseball cap. A visor in Europe is a clear plastic lens/shield like on road motorcycle helmets.

VwHarman (Nov 29, 2018 at 4:42)
visor is, I think closer to universal. On a hat, or ball cap, I have heard this part referred to as the brim of the hat. Visors also sometimes refer to those silly slept things poker players where in dick Tracy movies or something.

It's such a cliche, there is a fake spikey hair visor that sells like crazy:
www.etsy.com/listing/613908067/flair-hair-white-visor-brown-hair?ref=pla_similar_listing_top-3

wowbagger (Nov 29, 2018 at 2:07)
Really? I hate nothing more about my current FF helmet than the self-adjusting visor.. different folks, eh

mfoga (Nov 30, 2018 at 8:33)
@gdnorm: What has the seatbelts in order to use a Hans device that would not normally require a DOT helmet? Sure you can run a lower level helmeted there is no sanctioning agency but why would you.

mfoga (Dec 1, 2018 at 10:32)
@gdnorm: none of those are Hans devices. HANS device. www.leatt.com/shop/mrx-pro.html If you wanted to know if it works with a neck brace. “Other safety features that are always good to see are a breakaway peak and neck brace compatibility,”

xvire (Nov 29, 2018 at 2:25)
Could be a collective sue with Specialized. I mean, 'Enduro' is definitely infringing or something.

hybridDET (Nov 29, 2018 at 7:05)
@Serpentras: Are you talking about the external appearance? Inside, the Leatt lid has way better cushion IMO. My proframe has about 25% of what this Leatt has in terms of cushion and looks more like an XC helmet.
Below threshold threads are hidden

But then that's not tough. I've done better looking sh*ts.

andrewlombardo (Nov 29, 2018 at 4:45)
So when did full face helmets suddenly become "Enduro" specific??? What a marketing ploy.

butters1996 (Nov 29, 2018 at 6:18)
Enduro is pretty much dh lite with shorter travel bikes and a lot more pedaling, so it would make sense to market a breathable full face to that market?

maxphilip (Nov 29, 2018 at 7:49)
There should be a market or a catagory of specific helemets that offer greater ventilation. I don't think its a marketing ploy. Just the evolution of the enduro catatgory.

IllestT (Nov 29, 2018 at 1:05)
*magnetic closure.
The magnetic only engages the buckle. Fidlock has been on cycle helmets for around 10 years now on various other brands so I'm pretty sure it's safe

KxPop (Nov 29, 2018 at 1:21)
I was in a crash with my Fox Proframe which has a Fidlock buckle and hit my head so hard I lost probably around 30 minutes or so of memory. Cracked the helmet in half (it was only hanging together by the rubber padding on the chin bar) and ruptured a kidney + liver. The helmet was still on my head though, and the buckle didn't break! I've actually been through a few Proframes and Metah helmets (all with Fidlock) and that's never happened to me.

SonofBovril (Nov 29, 2018 at 1:32)
I've used the Fidlock buckle on several of their other helmets - best buckle out there for a bicycle helmet in my opinion
Post a Comment