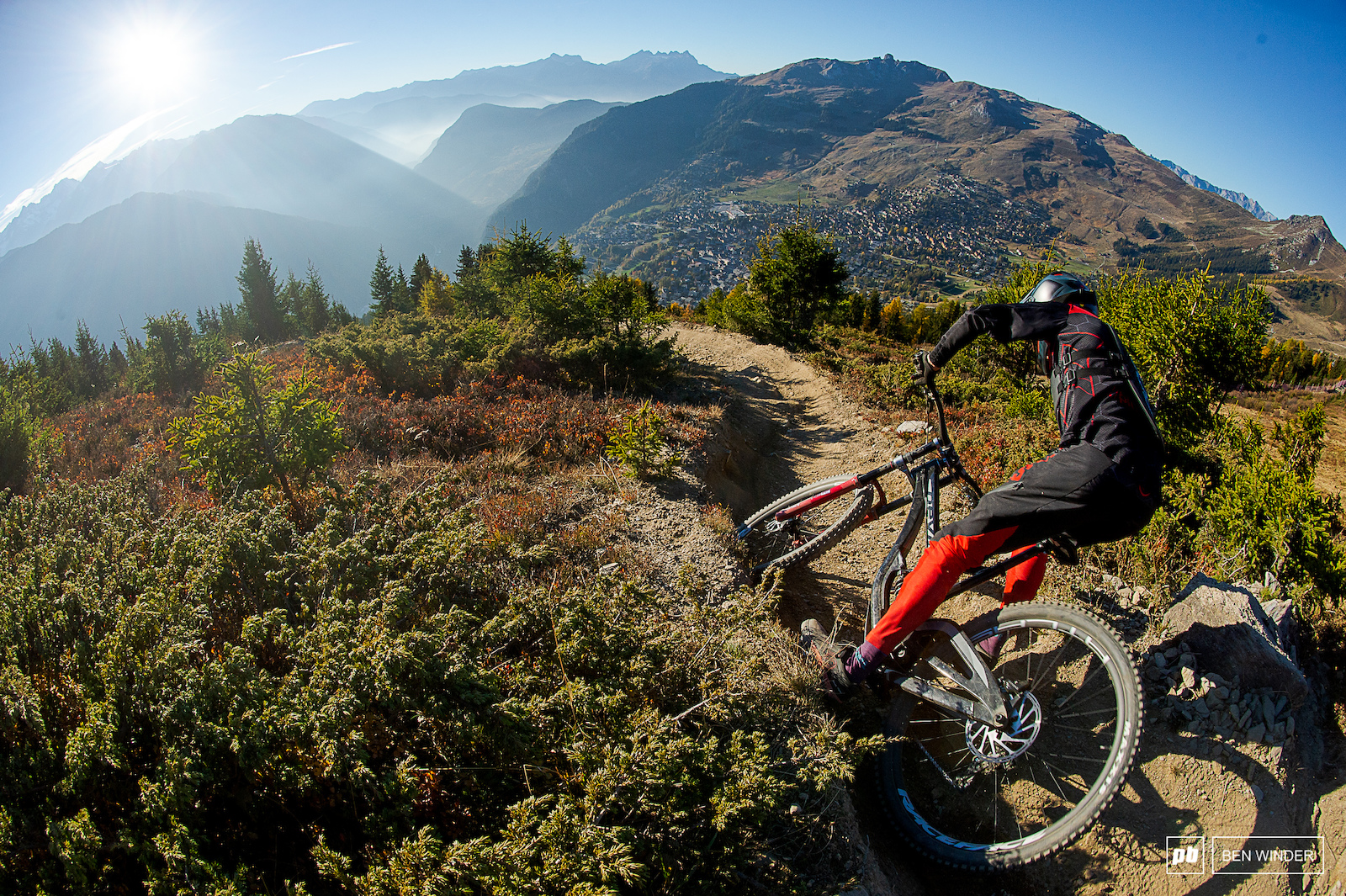 It was only a few months ago that we featured five 29" downhill bikes in a Ridden and Rated feature. That crop included Trek's Session, Cube's Stereo, Banshee's Legend, Norco's Aurum HSP, and Commencal's Supreme. This second batch includes four more race winning rigs from Intense, Saracen, GT, and Devinci. That's nine downhill bikes in a head-to-head comparison, and if you are wondering who came out on top, and which was my preferred rig, read on to find out. 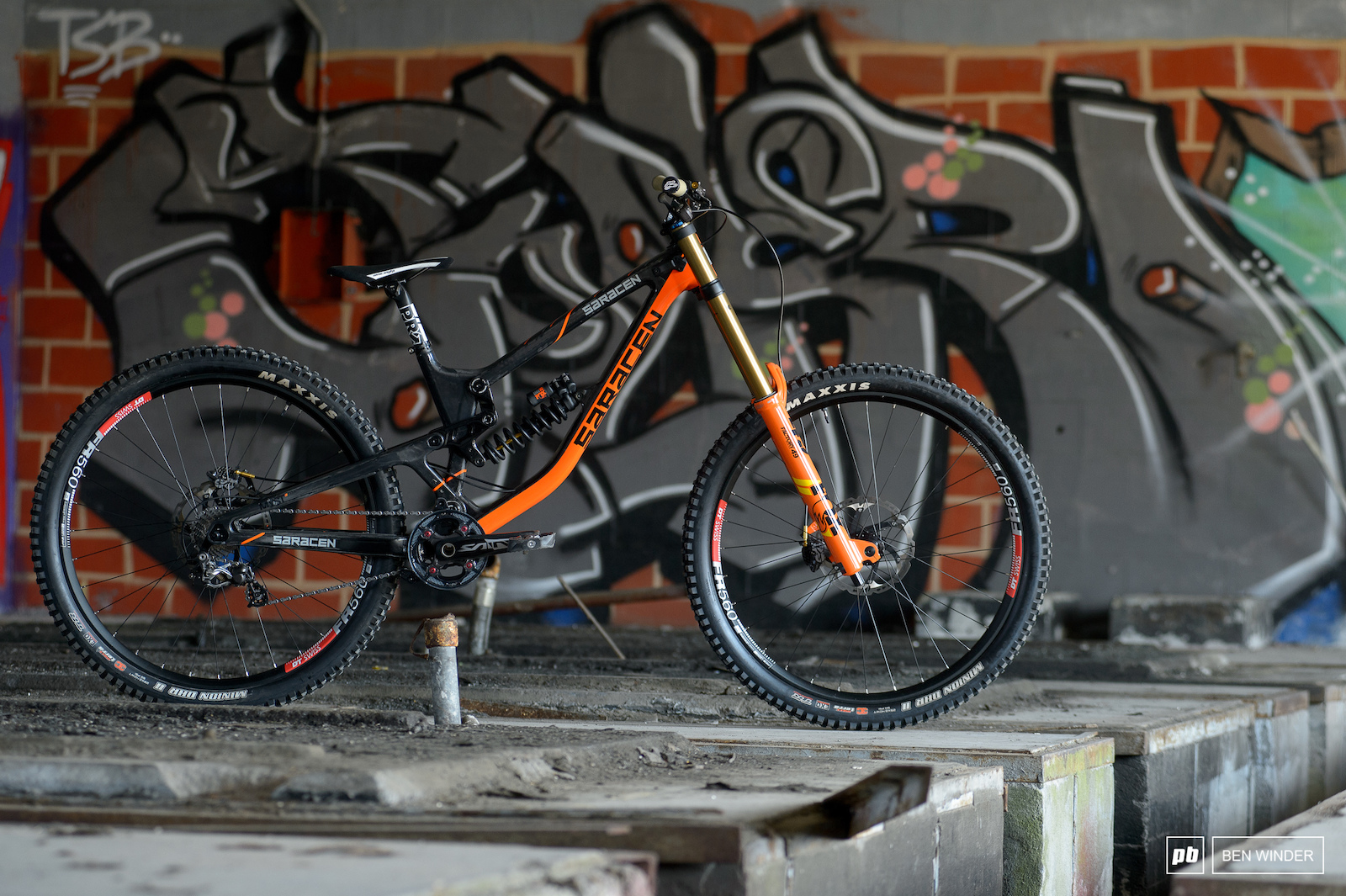 Saracen's Myst has been on the racing circuit for years, a brand with a long history that in more recent years was revived and fuelled by Madison – one of the UK's biggest distributors. This 29" wheeled downhiller for 2019 and onwards shares a silhouette with the previous Myst but has been tweaked and tuned with input from no other than Danny Hart, and 2018 Junior Downhill World Champ, Matt Walker. 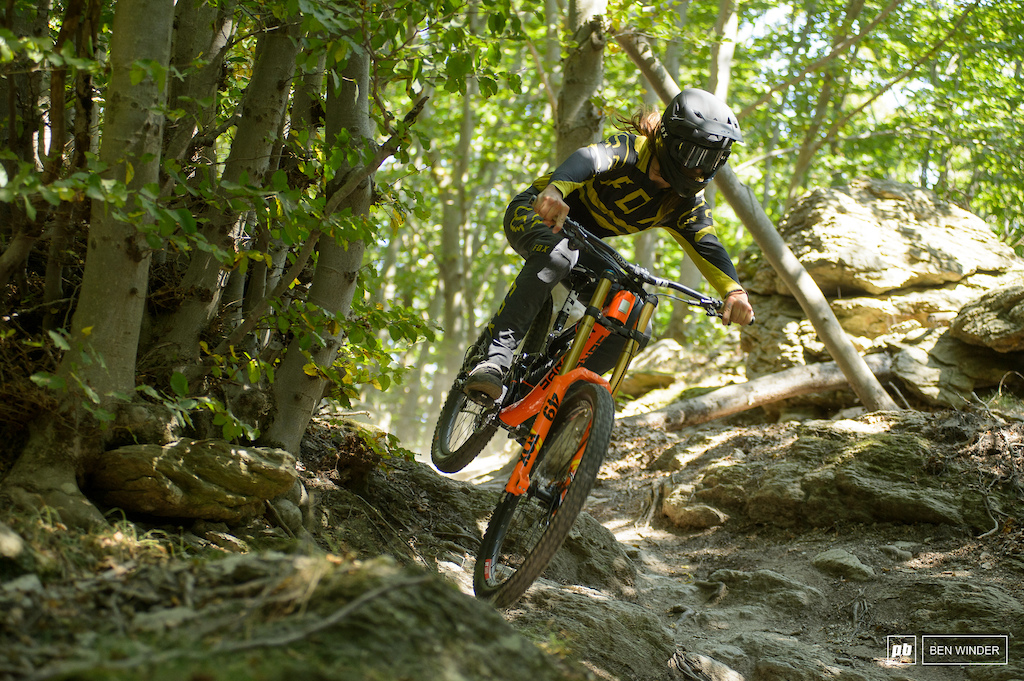 The Saracen was a real head-turner out on the track. People seemed to love the orange frame that matched the Fox 49 and the clear-coated carbon-fiber treatments. The Myst proved that a single-pivot bike with a linkage-actuated shock can still hold its own against the big boys.

The Myst is a great all 'rounder that will do everything well, with some adjustment to fine tune the fit and feel to your needs or to the track. The lack of an XL size puts tall riders out of the equation, but smaller riders can opt for the 27.5" wheel version that offers even smaller sizes. It' only other limitation is that it is not available globally, but one can be found in many dealers around the world, or from Madison's own online shop, freewheel.co.uk. 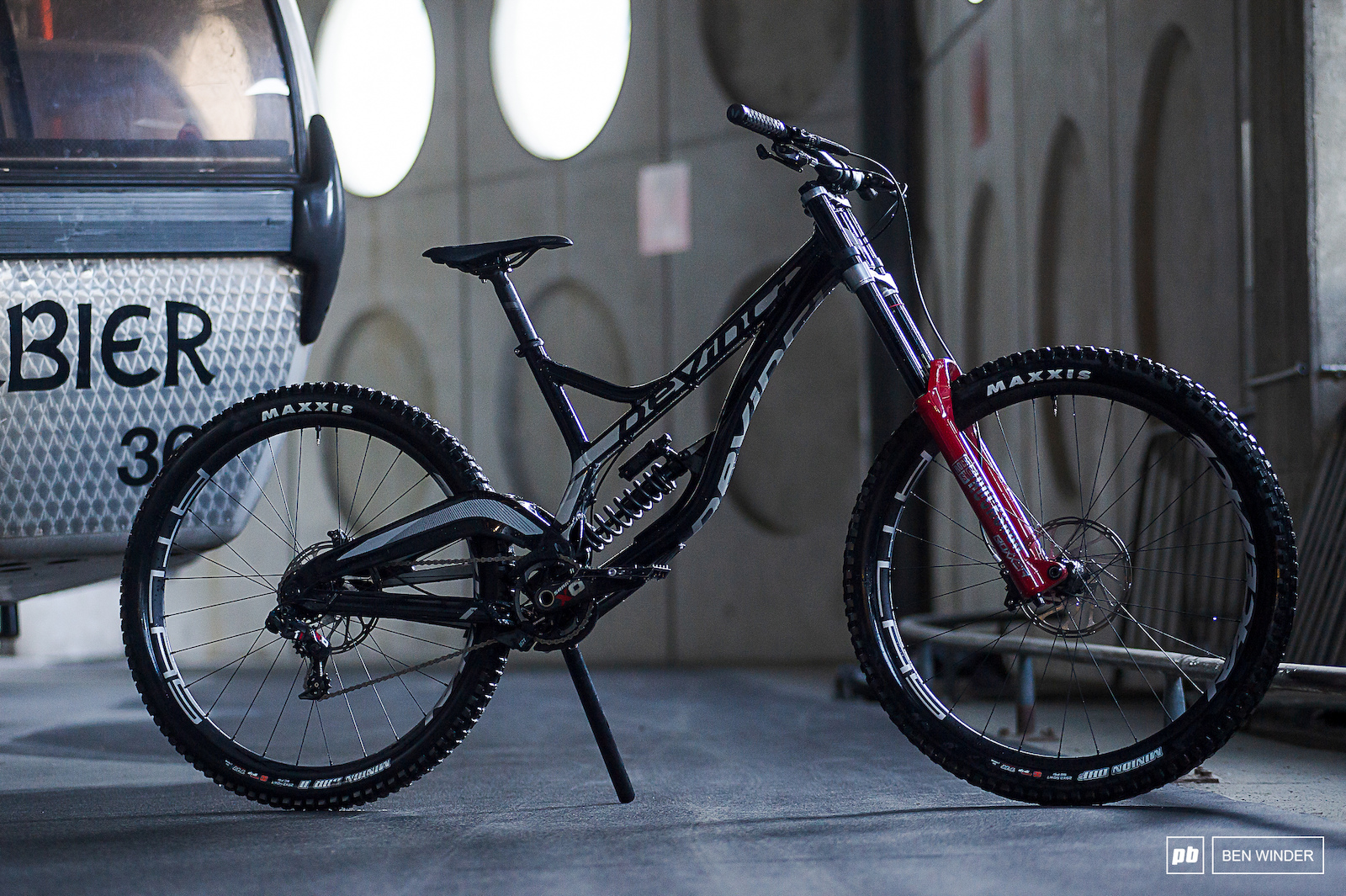 Devinci's Wilson has been on the World Cup circuit for years, but after a brief hiatus, it is back under the Unior Devinci Factory Team, with Dakotah Norton taking it to 5th place in Losinj. The current iteration rolls on 29" wheels, with a Canadian made aluminum frame and 204mm of travel, delivered via a Split Pivot suspension design. 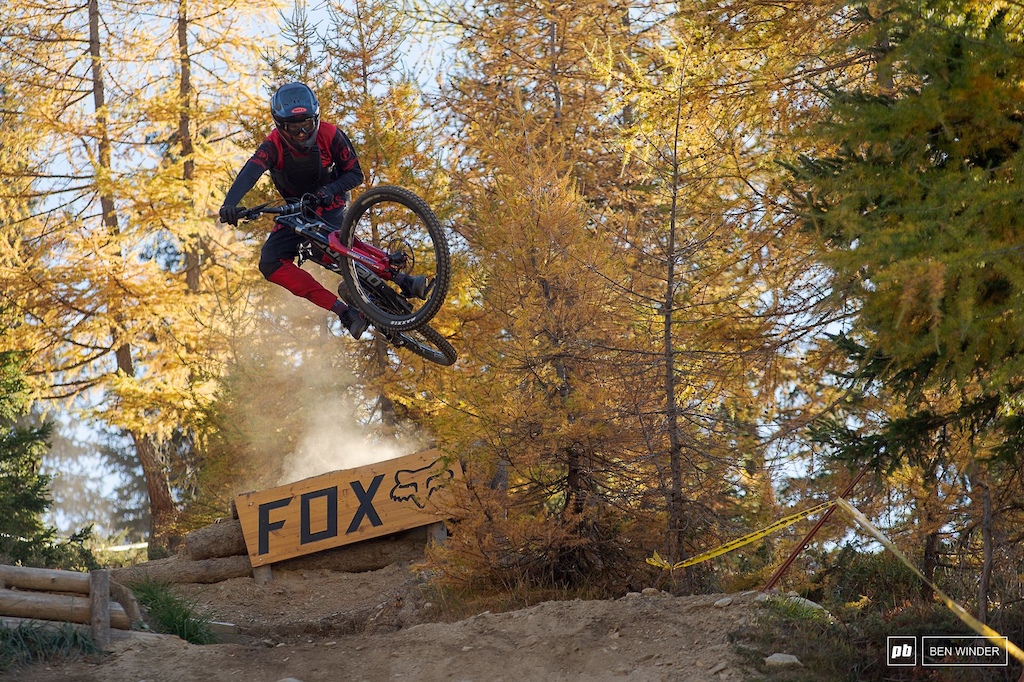 While the Saracen Myst is a great all-'rounder, the Devinci Wilson is a high-speed brute whose massive size and geometry ignores boundaries. This is a bike for people who want to go fast and carve corners, and one of the best choices if you ride brutal descents serviced by chairlifts. 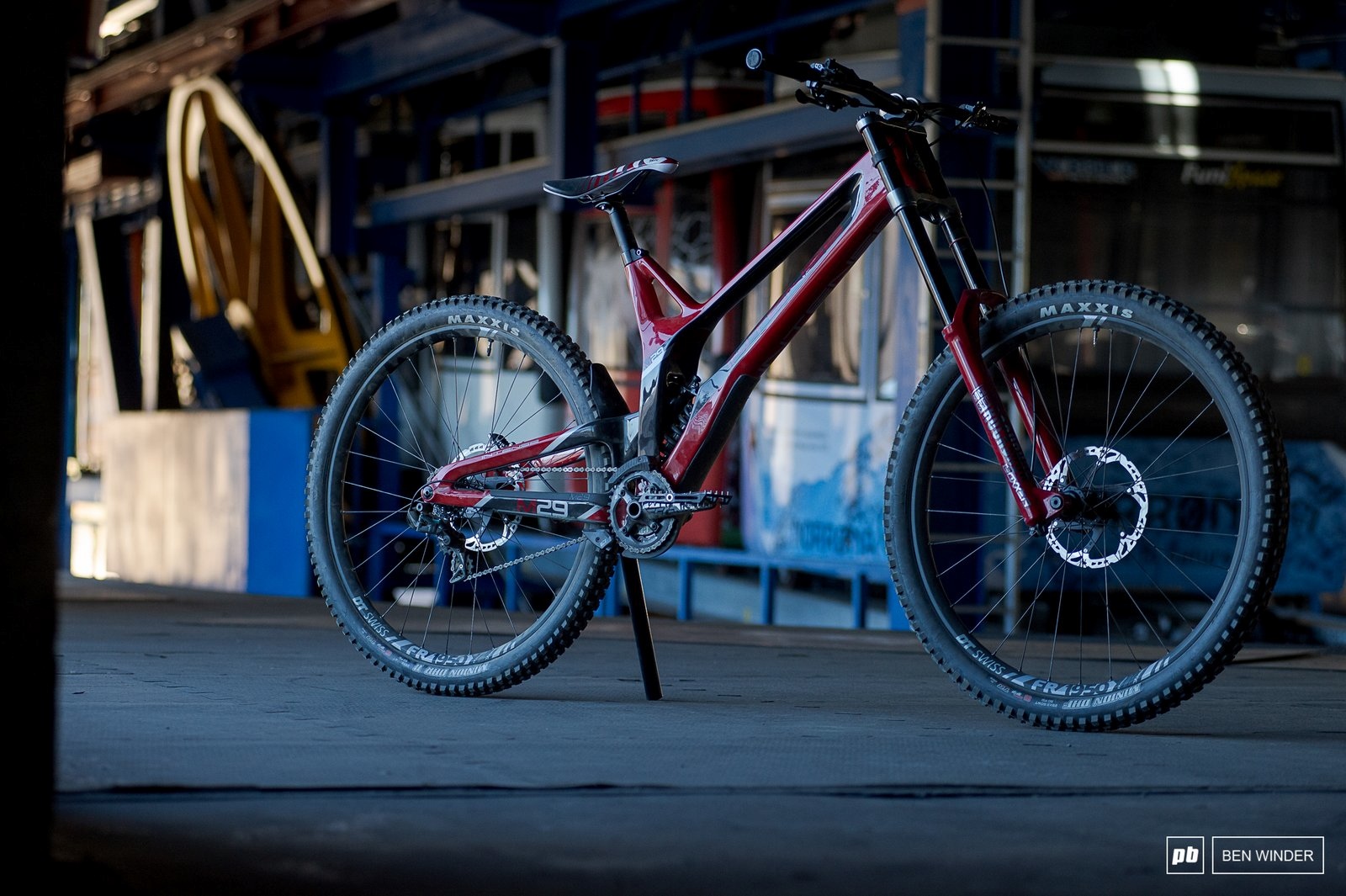 Intense has been competing at the sharp end of the downhill World Cup since before many of Pinkbike's readers were born, with the legendary M1 regularly visiting the podium. Back in the day, other manufacturers simply re-badged Intense frames with their own team logos. Nowadays, Intense Factory Racing and Cero Design (the studio behind Unno Bikes) have been heavily involved with the development of the 29" DH bikes. They were race-testing aluminum M29 mules during the 2017 season and were one of the first to debut a carbon production model.

In 2019, the M29 will be available as a complete
Intense M29
Travel: 208mm rear / 200mm front
Frame construction: carbon
Fork: Rockshox Boxxer World Cup
Shock: Super Deluxe World Cup Coil
Sizes: M, L, XL (tested)
Weight: 16.77kg / 37lb (XL, w/o pedals, actual)
Price: $5,999 USD Elite build
intense.com
bike in the 'Elite' build and also as a frame and shock. Initially, a race team replica going by the name FRO (For Racing Only) was released, and the 15 bikes sold out almost immediately, despite their $10,000 price tag. The Elite build reviewed here costs 'only' $5,999 USD and is ready to be put to test against the clock straight away. The frameset is also available for $2,499, including a RockShox Super Deluxe coil shock. 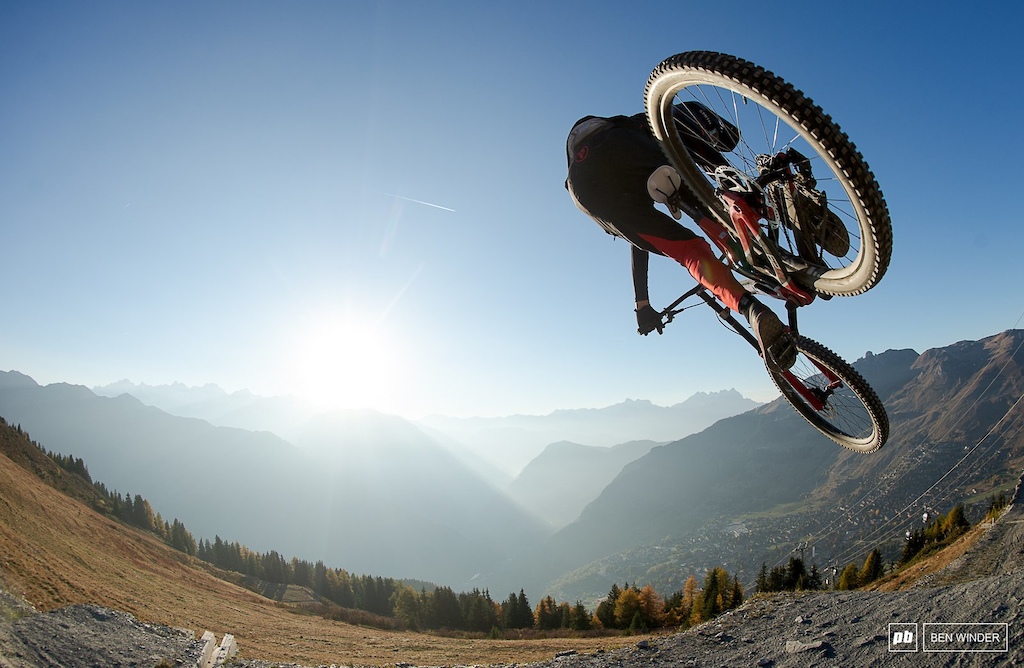 The M29 did have a few little annoyances when it came to shock access and some small hardware issues, but who can't like the M29? The iconic shape and style of Intense is something that is envied by many other brands.

The M29 had a unique ride quality and feel that is not found anywhere else. It excelled everywhere and sits securely as my second favorite thanks to its combination of style and superb ride characteristics.

The full review of the Intense M29 can be found here. 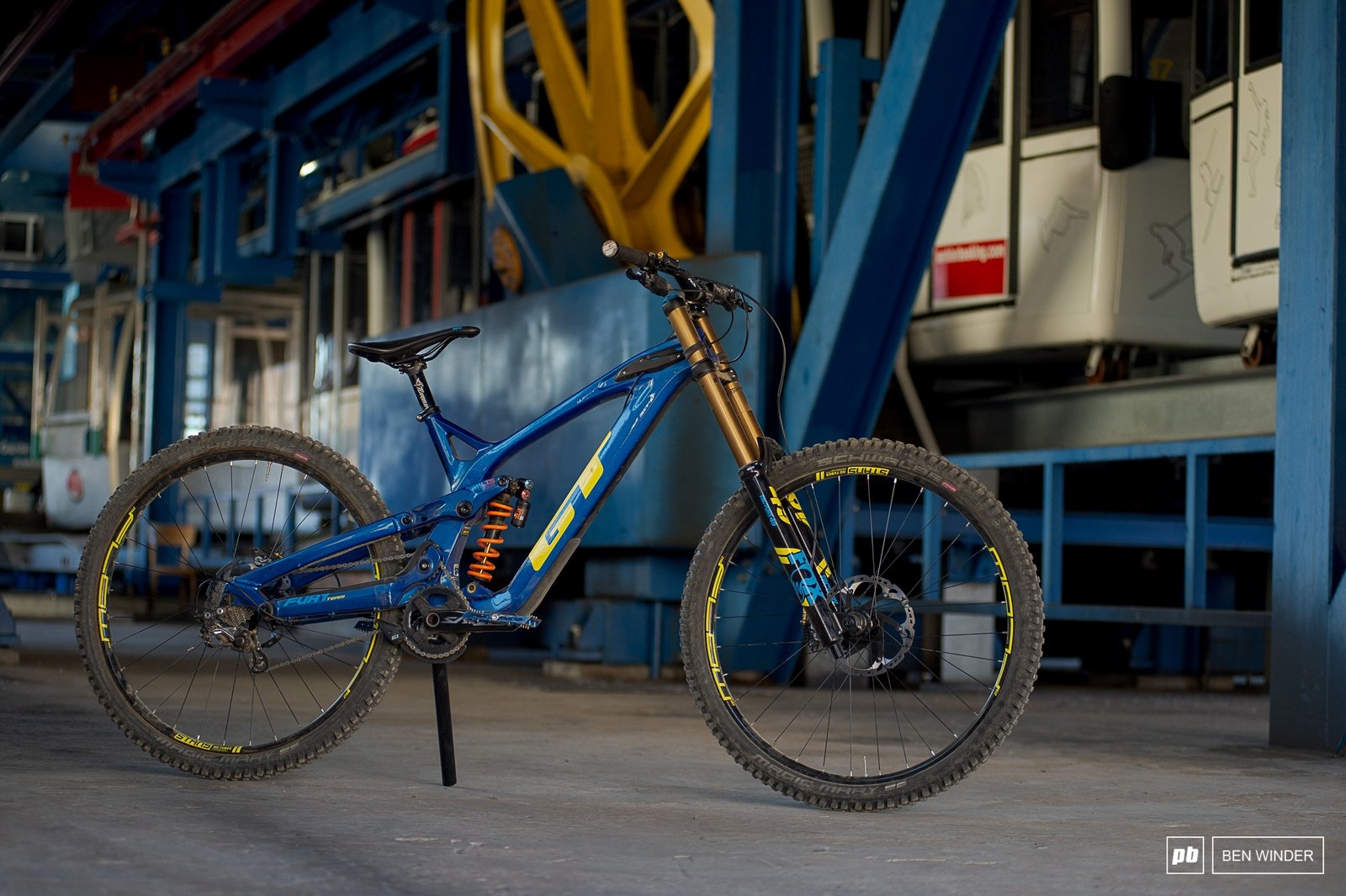 
After seeing prototypes of the Fury under the GT Factory Racing Team on the race-track in 2018, this new model was much anticipated. The Fury 29 marks a departure from GT's I-Drive suspension configuration, to the more conventional LTS design, with a high main pivot point and idler pulley. The current iteration's carbon frame can change between 29" or 27.5" wheels with a 'Switch Kit' in order to offer a bike for shorter riders and to provide snappier handling for bike park use. 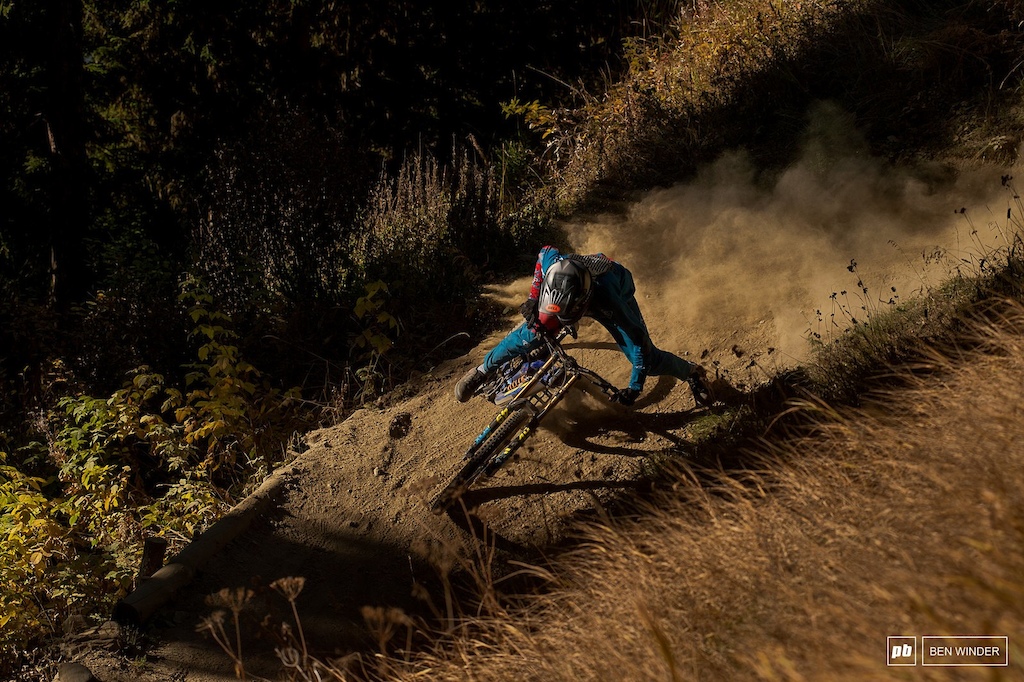 On track, the Fury had a great balance between a real high-pivot-idler machine and classic four-bar system. If you like a four-bar design, the GT gives you that, but with a smoother ride and less feedback from the trail through your feet and legs. Its heavy weight will put some riders off, but if you want a rig that can be bashed around bike parks, or you're a hard rider and don't want to worry about thin carbon tubing, the Fury could be for you. We had an issue with a weak shock bolt during testing, but GT assures us that has been addressed on all models moving forward.

Like the previous Ridden and Rated for big wheel downhill machines, and despite my criticisms, all the bikes featured here are more than capable of taking on the hardest tracks all over the world, and they are all better than everything from earlier this decade – if you have an old 26" bike from 2011, anything here will blow your mind with its capability.

But, one bike has to come out on top. The Intense M29 was a fantastic machine in my eyes and sets a benchmark for many others to work towards. But, and there is a big but – the Commencal Supreme 29". The Supreme took our 2018 Bike of the Year award, and I still post it at the top of my list. It simply does everything - it's a superb value and it comes in many colors, build options and sizes. Above all that, there is still nothing else that gives the bump munching ability, grip, balance, tracking, and silence that the Andorran bike offers.

Flowcheckers (Mar 18, 2019 at 2:00) (Below Threshold)
I'm betting there will be more crashes with more racers on big wheels. There are trade offs to the increased speed of the wheels.

*I decided to be PC Police this week.

Verbl-Kint (Mar 18, 2019 at 2:44)
Good luck and godspeed to @paulaston, definitely my favorite reviewer on PinkBike. He's always been balanced and honest on reviews, even if it means knocking an envied brand off their lofty perch.

daweil (Mar 18, 2019 at 0:32)
Commencal, cube are alu, and from the other manufacturers cheaper options may follow. Also other brands besides the pb reviews do exist.

CONomad (Mar 18, 2019 at 0:33)
Thanks for the reassurance Paul, being 6'5 I really went out on a limb and was one of the first to buy the Commencal, the only other option at the time was the geometrically stunted and over priced Trek. But I'd always had good luck with Commencal and took a gamble, which paid off as the last season on it was absolutely amazing (by both my experiences and WC results)! It's great to know that even by the reviewer's standards though I picked a winner not a lemon.

It looks cool, but for “heritage” are we going with ancient history or a more recent heritage of cracking frames, poor qc and Jenson USA sales?

This is the least important factor in buying a bike. Intense is just another consumer direct brand, nothing else.

groghunter (Mar 18, 2019 at 10:00)
The funny thing is that's part of their heritage too. Lots of M6s and M3s needed replacement rear triangles, so much so that "M3 front triangle" was a common thing on buy and sell.

They've always been maintenance monsters. I can't see myself buying another Intense, ever.

skelldify (Mar 18, 2019 at 16:54)
“Intense has been competing at the sharp end of the downhill World Cup since before many of Pinkbike's readers were born.”

Pretty sure they didn’t have a team for quite a few years before 2019.

dualsuspensiondave (Mar 18, 2019 at 3:15)
So the least expensive carbon bike of the litter has a con of being expensive @paulaston ? That is really interesting.

FrEeZa (Mar 18, 2019 at 3:06)
Ah yes, when one of the cheaper bikes is entirely made of carbon, is a complete redesign from the ground up and comes with WC forks and shock, yet the price is too high for low end spec WC parts. Not having many cons in the cons section is not a bad thing, you know? At least the saddle on this one comfortable

tacklingdummy (Mar 18, 2019 at 5:59)
I don't see the point of carbon when these DH bikes are weighing 35-39lbs. Bike manufacturers can easily make those weights with aluminum frames. Perhaps stiffness but that is still a stretch.

MarcusBrody (Mar 18, 2019 at 3:55)
Would you still prefer the Commencal to the Intense if racing was only a small part of what you ride on your DH bike?

jason475 (Mar 18, 2019 at 6:27)
The only "cons" you put down on the Saracen were...no xl size, and limited availability. So if this is about which bike is the best in your eyes, how does a bike you listed performance or spec "cons" on, win over a bike that had performance cons??? Intense must be upping the ad dollars this month?

MarcusBrody (Mar 18, 2019 at 7:34)
Well, the M29 didn't have any performance cons either. If you read the longer reviews on those bikes, it seems like Paul got along just fine with the Saracen but felt that the M29 was special (though in a different way from the total ground munching of the Commencal).

Sometimes how we feel about bikes aren't a linear combination of the pros and cons list. That's why the longer form reviews are nice.

In a dh machine like this... great performing suspension should be a massive massive plus. No XL... o.k. well... is that a ding for anyone under 6'2? You need to talk about the bike and the people buying/riding that bike in a review not those that aren't/can't. Those people clearly aren't interested in that bike because they can't buy a big enough one.

The bike that got the thumbs up has crappy components for the money and has maintenance issues. And is expensive. But it looks pretty.

Didn't realize I was reading a Men's Health review.

mtb-journal (Mar 18, 2019 at 8:16)
@paulaston thank you for the new reviews and keeping the comparison format with all other DH bikes you have tested.
Now all we need is to see how the V10 meassures up against those bikes and its a wrap.

NinetySixBikes (Mar 18, 2019 at 15:52)
Con for a direct to consumer brand: Low-spec components for the price tag. Welcome to the crazy wonderfull world of MTB...

Squeakybb (Mar 18, 2019 at 13:18)
I have the 27.5 legend. Objectively best downhill bike I've ever ridden. I'm sure the 29 version shares most of the same positive characteristics.