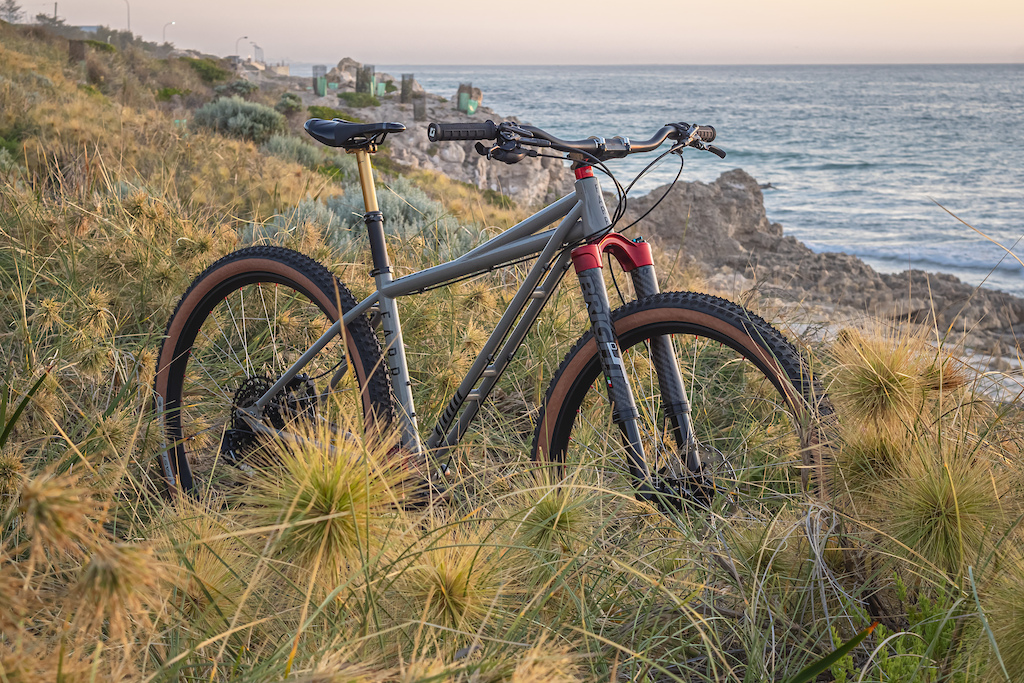 Photos: Mat Wikstrom.
Australian brand Farr set out their stall as soon as you hear about them. This isn't a brand that's invested in tackling the techiest terrain but instead about broadening horizons and making those epic adventures easier, faster and more enjoyable. 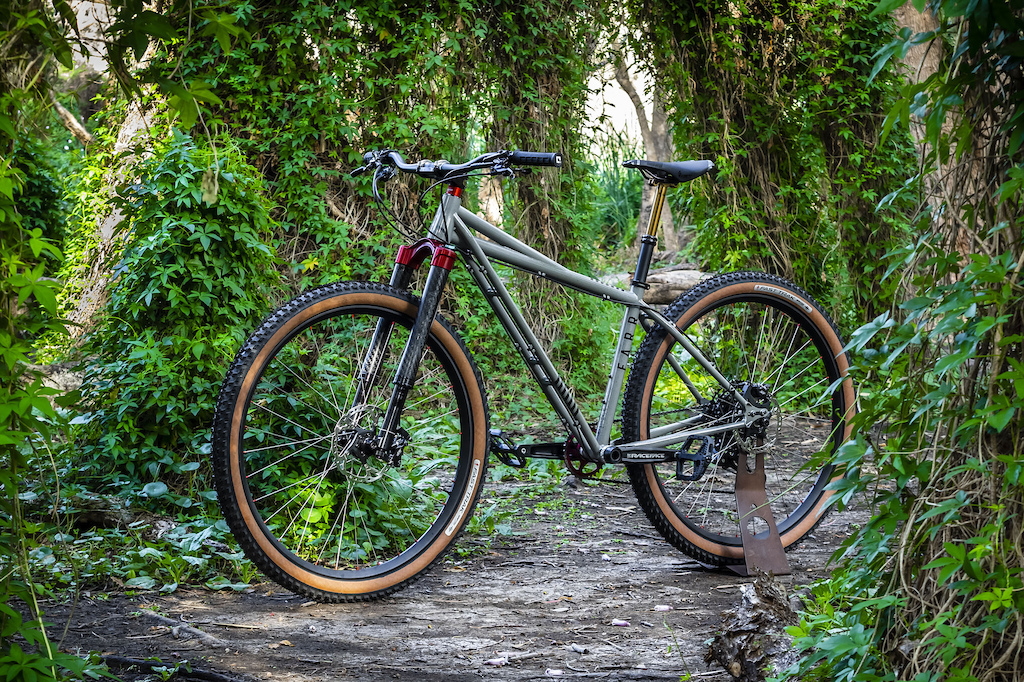 Like a lot of the unusual projects we've seen in the past 12 months, this bike was dreamed up during lockdown. For Farr, the inspiration came from two places - firstly from old-school MTB and BMX bikes. Back in the day frame designs were a lot less uniform than they are now and Farr wanted to hark back to that era with this bike. Victor Momsen, the designer, said, "We were looking at some of the great bikes from the early days of both sports – so many cool frame designs that showed the creativity back in the day. Today it has become all about carbon and me-too designs that all look very similar on the trails or roads."

The second design cue comes from the world of motorbike and the Ducati trellis design. First created by Massimo ­Tamburini, this uses a steel skeleton to vertical strength but allows for lateral flex, there's a great deep dive on it from Cycleworld, here. This isn't the first time we've seen a trellis design in the bike world and part of the inspiration comes from the original SE Quadangle from the ’80s. 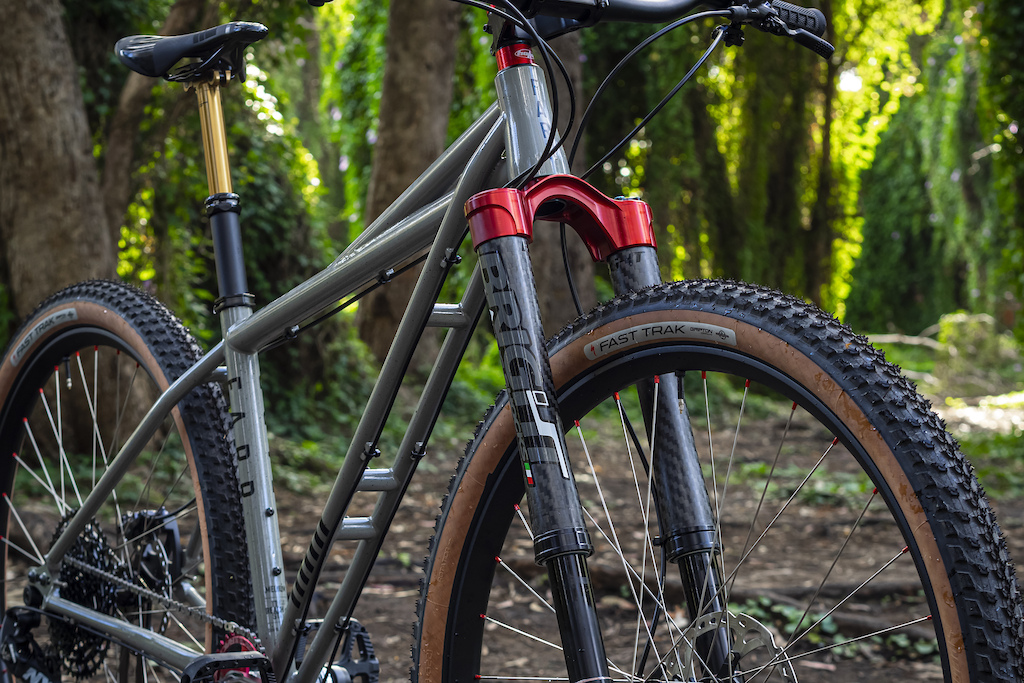 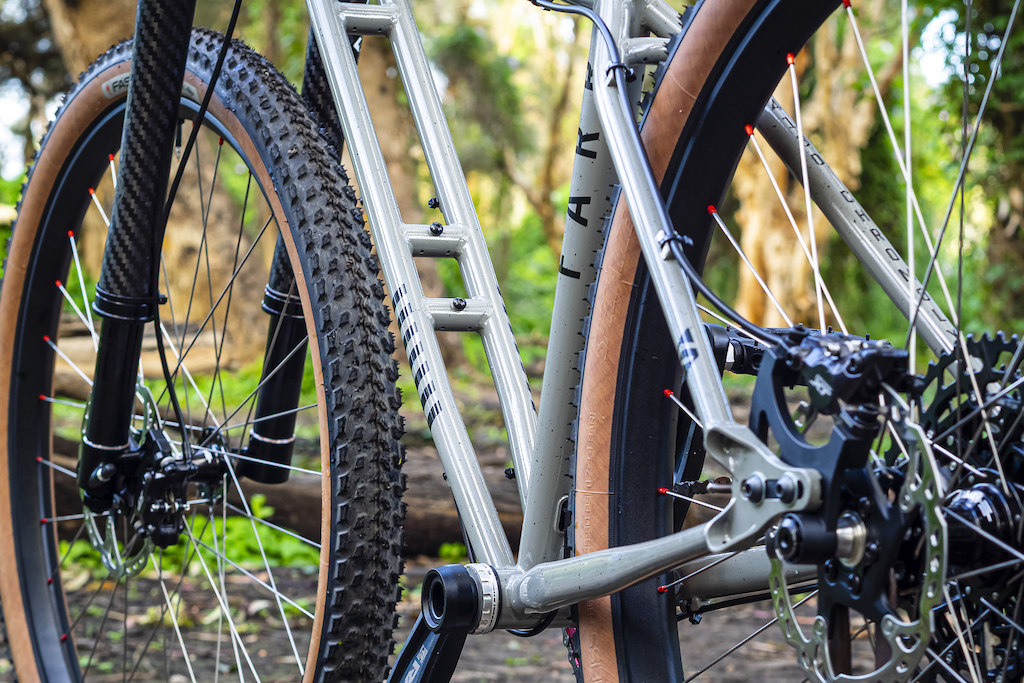 The Ducati-inspired trellis design apparently adds around 800 grams of weight over a standard steel hardtail frame but Farr argues this isn't all that much if you're planning on packing up the bike with bags for a long tour anyway.
Of course, this isn't a full throwback and Farr has tried to update the designs it drew inspiration from to make a modern mountain bike. The wheels are 29" front and rear with Boost spacing and it also has modernised geometry and is compatible with a dropper post. The bike is designed to be run rigid or take a 100-120mm fork (510mm axle to crown) although Victor admits the design and amount of oversize tubing/welding would allow for up to 140mm travel up front (although this would raise the BB and slacken the angles a bit). Put the whole package together and Farr describes it as "an old school BMX meets vintage MTB meets bikepacking meets fun bike for adult outliers". 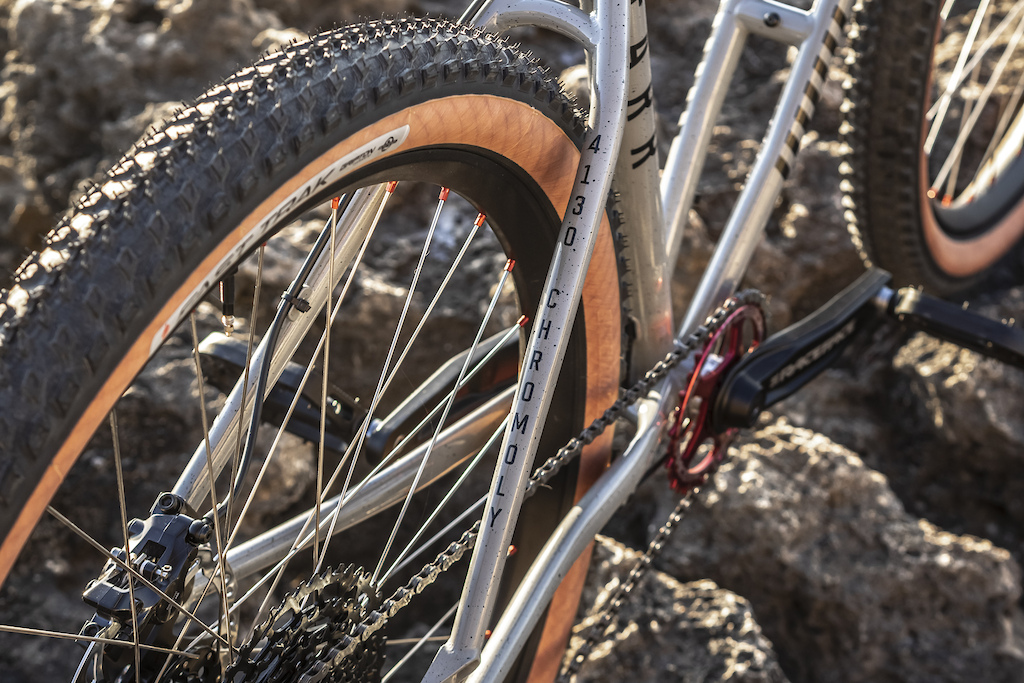 What other material could it be for a retro-inspired frame? These Cromoly tubes have clearance for up to 2.6" tyres too.
Geometry

Farr wants to make it clear that this isn't a trail bike and while some of the angles head that way, it has stuck to fairly conservative reach and angles to ensure versatility. It currently straddles the line between MTB and gravel geo which points to its touring ambitions with a more playful edge. 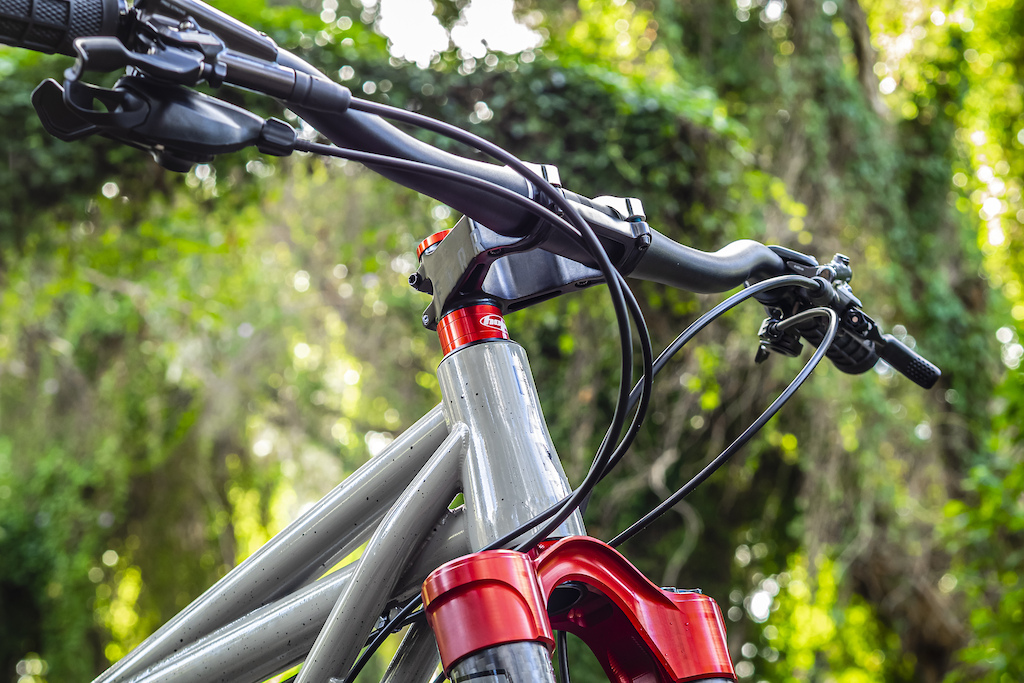 This MTB build of the bike comes with RF's unique Headspace 35 stem. 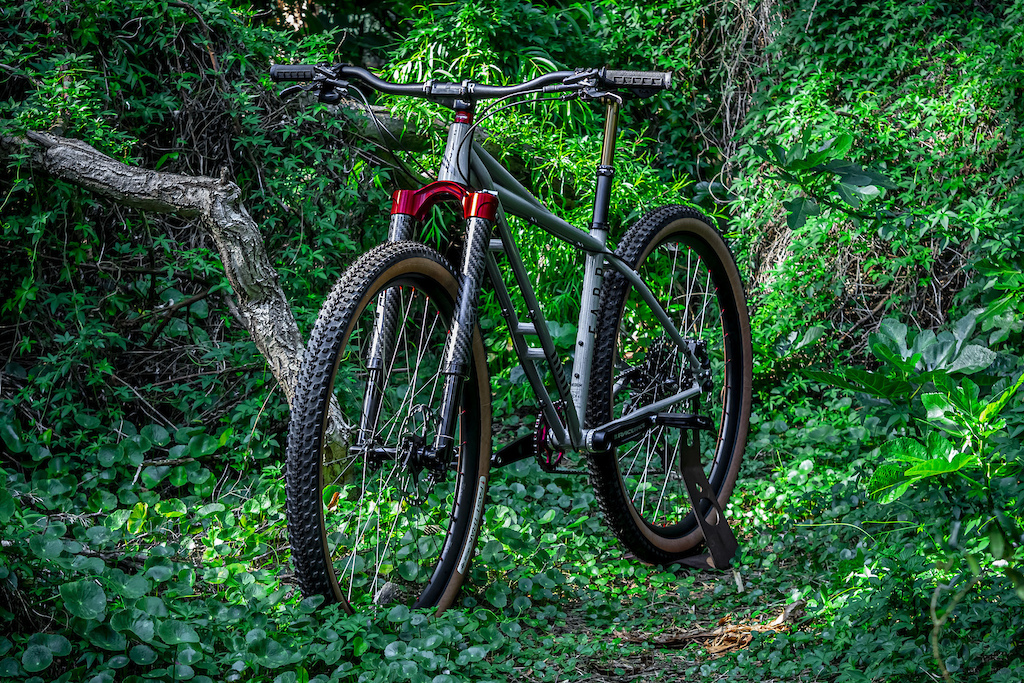 It also has a custom 120mm, 510mm a2c fork from Bright Racing Shocks in Italy. Its F929 upside down XCO fork looks great and the custom red anodizing is just adding some icing to the cake. 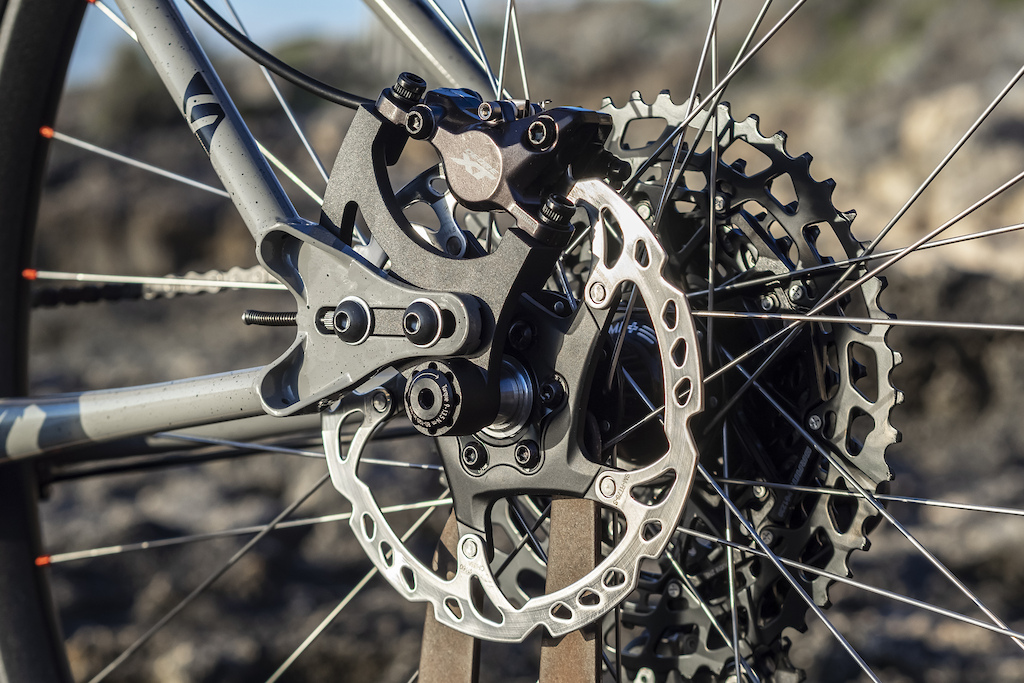 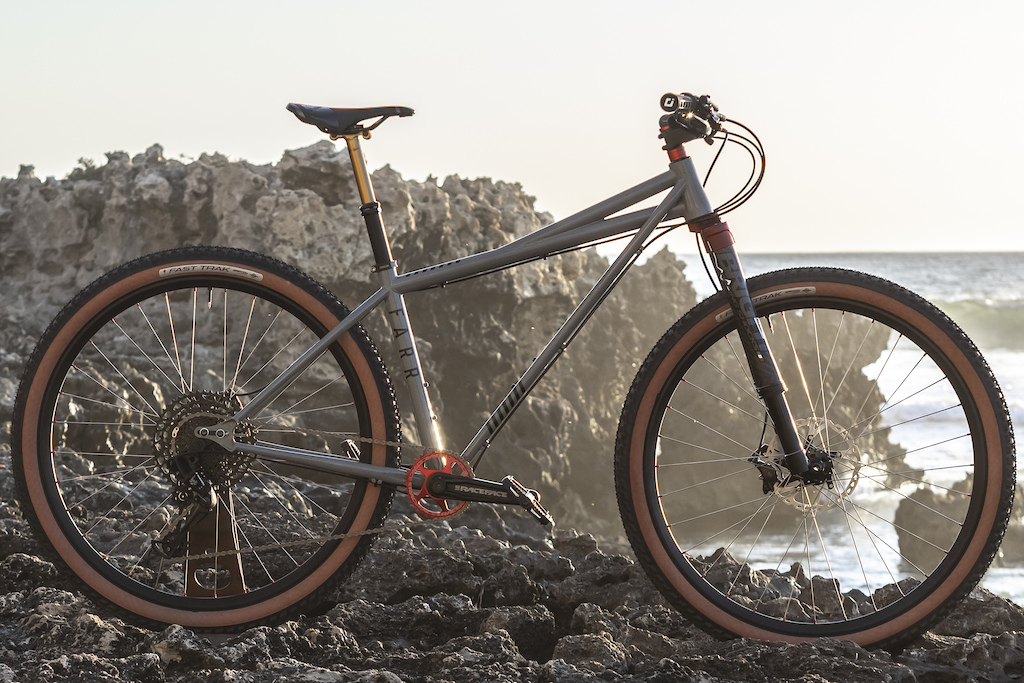 The Twin-T has a totally unique silhouette.

Farr will be producing 100 units of the Twin T across the two different colours, however another run could be considered if the demand is there. The Taiwan-made frames are available to order now for delivery in July or August. More info, here. 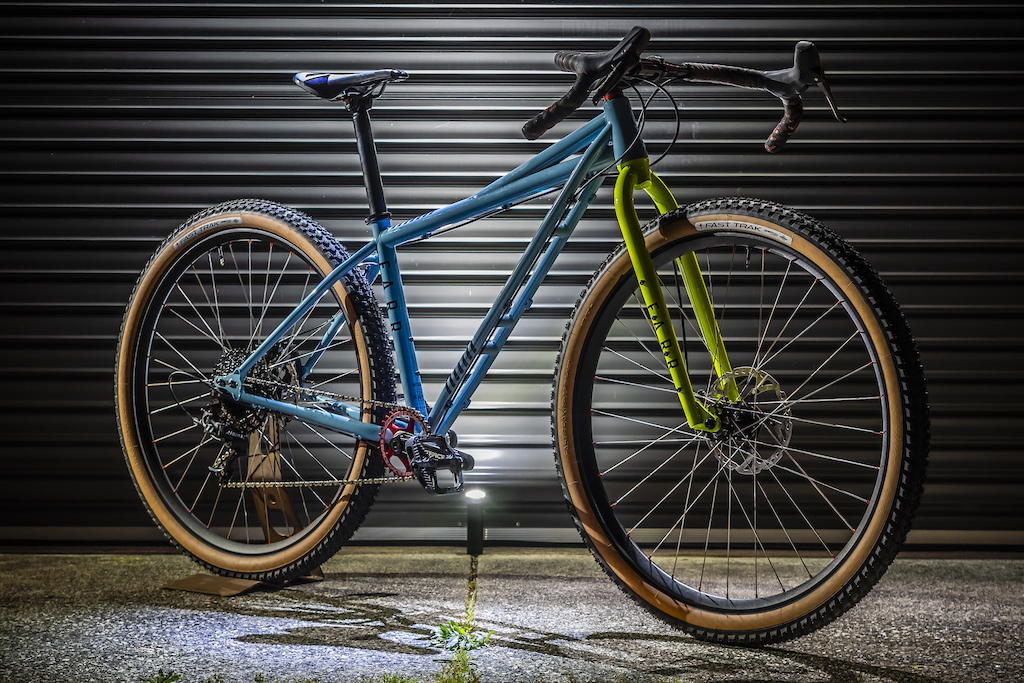 The frame can also be built up as a gravel bike.

blackthorne (Jan 20, 2021 at 4:59)
Farr wants to “ make those epic adventures easier, faster and more enjoyable” then makes a bike that weighs more than a WW1 tank

seraph (Jan 19, 2021 at 22:24)
Did any of you actually read the article? "This isn't the first time we've seen a trellis design in the bike world and part of the inspiration comes from the original SE Quadangle from the ’80s."

Compositepro (Jan 20, 2021 at 1:08)
@seraph: you do know a lot of people just come to pinkbike for the comments the article is more like a header

Craigatdescentworld (Jan 20, 2021 at 6:11)
@johnny2shoes: Killer V - that was the shape given to the smaller frames to help with standover where it looked a bit like the Farr frame, the Delta V was the first Suspension bike (and the Super V followed it )

AlexBreck (Jan 19, 2021 at 20:04)
Heard they're making a special water bottle that fits in the trellis so water weenies can shut the Farr Cup

I guess you mean Farr Queue...

NorCalNomad (Jan 19, 2021 at 23:20)
@iamamodel: They wouldn't have to that thing already weights 5 billion spoons of marmite or whatever the units are. It'd only take about a half a dozen donuts for it to weight more than most EWS winning frames. 1 water bottle strapped to it and it starts weighting more than some DH frames ffs.

iamamodel (Jan 19, 2021 at 23:48)
@NorCalNomad: Marmites are the English measure. Vegemites are Australian. They are equal in value, but 1 Marmite/Vegemite to 10 Peanut Butters (volume) because you need far less. For the Euros there are 5 Nutellas / Nutinos to the Vegemite.

Arepiscopo (Jan 19, 2021 at 16:42)
That’s a sweet bike. But with two downtube you should have double the water bottle holders...just saying.

BikesBoatsNJeeps (Jan 20, 2021 at 7:34)
At least this Ducati wont completely hide and mash your perfectly sculpted hair into a full face AGV, you can allow your frosted spiked hair to stick up through the helmet vents.

FlatSkilz (Jan 19, 2021 at 22:42)
Those BRIGHT Racing Forks look the goods. Is there anyone that has feedback on them? How do they compare to other offerings? After having a Lefty nothing else in the current RS & Fox shed performs as well so have been disappointed and I've been considering Intend as the Lefty is 100mm only.

just6979 (Jan 20, 2021 at 8:00)
I really don't see the Ducati trellis in the design. It just looks like a double-down tube old-skool design, which I'm pretty sure were used purely for strength, not just for creativity's sake. The top-tube-on-bottom front-end is pretty cool looking, and that stem is interesting, although damn long!

rodeostu (Jan 19, 2021 at 17:41)
Wow. That's sort of the velocipedic equivalent of those giant combs on the Ferrari Testarossa's air intakes. Whatever functional benefit the structure provides is kind of irrelevant when compared to how cool it looks.

snl1200 (Jan 20, 2021 at 11:51)
So a 20" Surly Ogre Frame has a claimed weight 2.7 kg. with paint. So their estimate of the added weight sounds about right as the Ogre seems a fair comparison. I would also agree that those who buy a cromo touring bike and load it up for bike packing might not be the crowd to be that worried about the additional weight...to a degree. I like cromo but do my best to keep what I strap to it light so considering this amongst other options that would be a factor. It does look beautiful though IMO and that wide downtube might make for some cool custom frame bag options and mounting options for the underside of the tube like stashing a pump, tube and tools in that space between the dual downtube. The slight bump up front might make a gas tank snack bag pop up a bit more but likely not that big of a deal. Cool bike. Well done.

Woodrats (Jan 19, 2021 at 18:16)
Looking through the pictures and it’s like oh alright, kinda cool. Then you see the last one.....
It’s like when you look back on a yearbook and it reminds you of your braces and acne. Just awkward.

SonofBovril (Jan 19, 2021 at 21:56)
Victor Momsen is South African as far as I know? He was involved with Patrick Morewood on the Morewood brand before they both went their own ways and Patrick created Pyga Bikes while Victor went on to do the relatively successfull XC & marathon brand - Momsen, in South Africa.

Not sure if he is a partner in Farr or just a designer, but interesting bike, looks to have been based off the Momsen STR29 but with a changed front triangle... momsenbikes.com/shop/frame-kits-various/frame-momsen-str29-2018-green

Sshredder (Jan 19, 2021 at 18:49)
There was a frame builder that made frames with bird cage design tubing much like the Ducati. It was a full suspension road bike with 20 inch wheels.

Rig (Jan 19, 2021 at 23:26)
Haha that is what they called their gravel bike if I am not mistaken. I had one for a while, really nice frame and was super cheap. Just heavy as boat anchor - but can't fault them for that at the price.

watchtower (Jan 19, 2021 at 21:31)
As a kid I always wanted an SE Quadangle, as a big kid I really like this but I already have a good hardtail and spend 80% of my time on my dual suspension thing.

kuna26 (Jan 21, 2021 at 12:37)
Big points for looks and something different, however it is heavy and good luck drinking your water bottles as they will be covered in whatever your front tire encounters.

Kramz (Jan 19, 2021 at 17:59)
Only thing I would change, is raise the bottom bracket height, with at least level chainstays, and then put a asymmetrical chainstay, on the drive side. Just to improve BB height.

pikebait2013 (Jan 19, 2021 at 23:44)
This bike challenges our expectations of the appearance of mountain bikes and that’s what I appreciates about Farr.

MattP76 (Jan 19, 2021 at 23:11)
They have really missed a trick with this. Should have given it more up to date geo and decent rear tyre clearance. Also stop with this gravel bike rubbish!!!

ReubenSandwich (Jan 19, 2021 at 17:22)
Only clicked on this to see what the USD fork was. Ugly bike. Excessive tubes. Looks even worse with drop bars, wish I hadn't clicked.