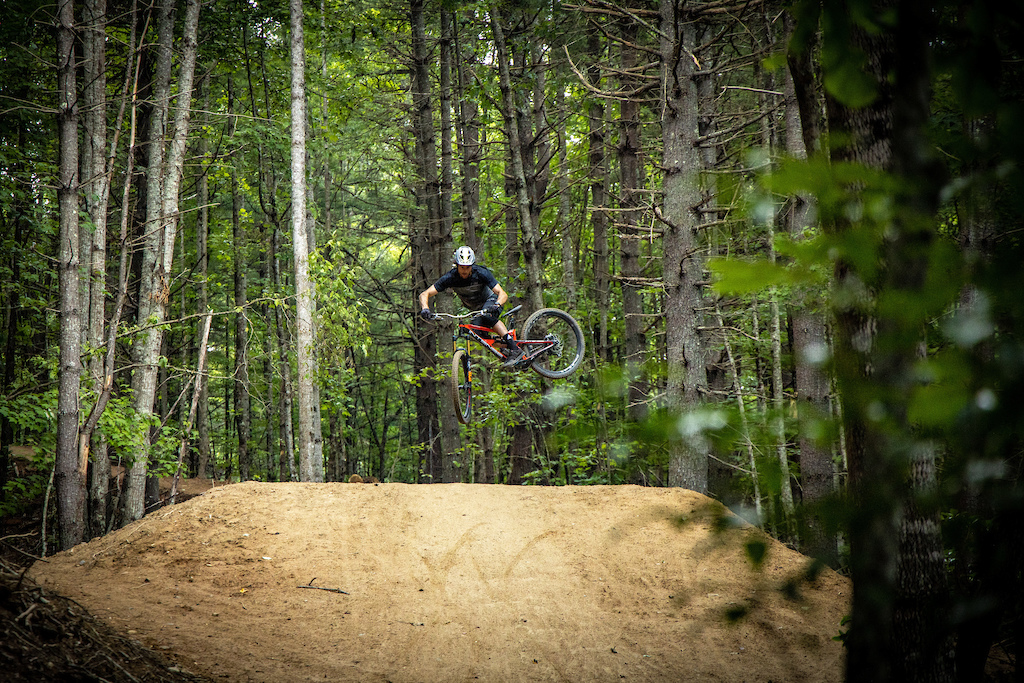 With races canceled due to Covid19, a lot of racers and riders have had a little more time on their hands than normal. In Western NC, a few of them, including Neko Mulally and Isak Leivsson, have been hard at work building a new bike park along with help from a host of other locals including the Shaw brothers.

The idea for a new bike park stemmed from the demand for a maintained mountain bike-only trail network in Western NC. While the area is known for its rugged and remote terrain, the trails in the surrounding national and state forests are all multi-use, multi-directional, and not designed for mountain bikes, which may come as a surprise for many. While that's part of the regions' allure, the absence of mountain bike trails has left the area a bit behind and led to a lot of controversy surrounding the upkeep and management of current trails in the forests, especially given the large numbers of multiple user groups vying for access.

Camp Kanuga is located a short drive from both Pisgah National Forest and Dupont State Forest, near Hendersonville, NC. The camp and its adjacent conference center typically host thousands of kids throughout the summer and business expos over the year, but with COVID-19 it's been strangely quiet for most of the year, outside of the sound of trail building. 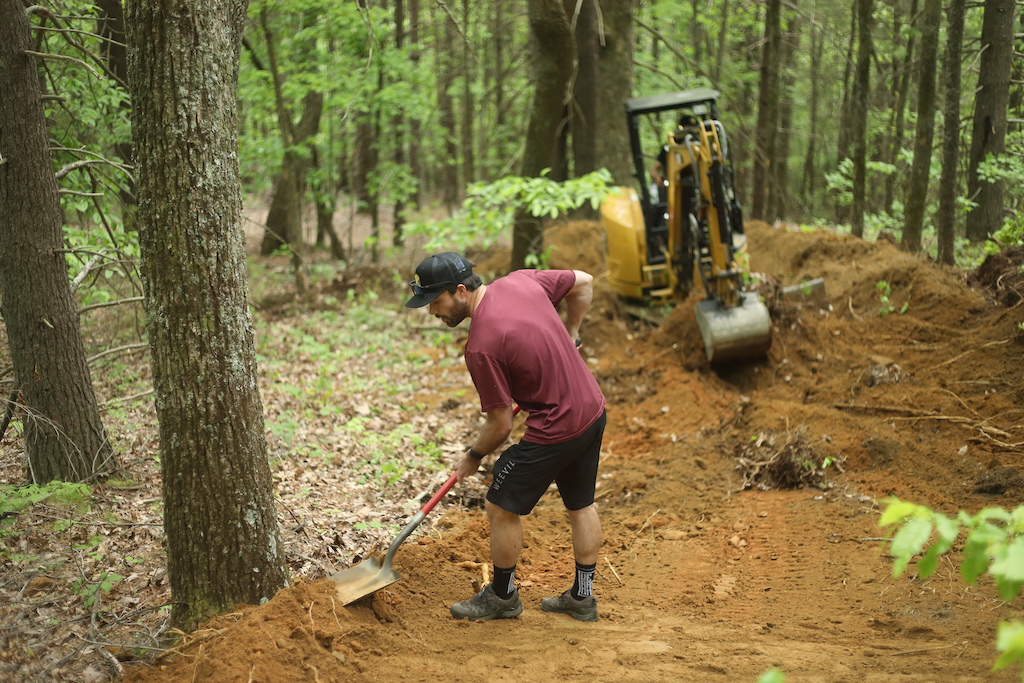 Last year, Kanuga approached local mountain biker Dr. Dave Lamond, who lives next to the camp about what it would take to add trails to the property for its campers. Lamond then reached out to Neko Mulally and formulated a plan to build some trails, eventually opening the riding to the public.

While the bike park was planned to be opened late at the end of 2020, the lack of campers along with Neko, Isaac, and others having no travel on their calendars allowed the timeline to be accelerated. Over the course of a few months, they've managed to build the full first phase of the bike park which opens this weekend. With the camp and conference center being completely on private property, there was no red tape to go through either, once they broke ground. 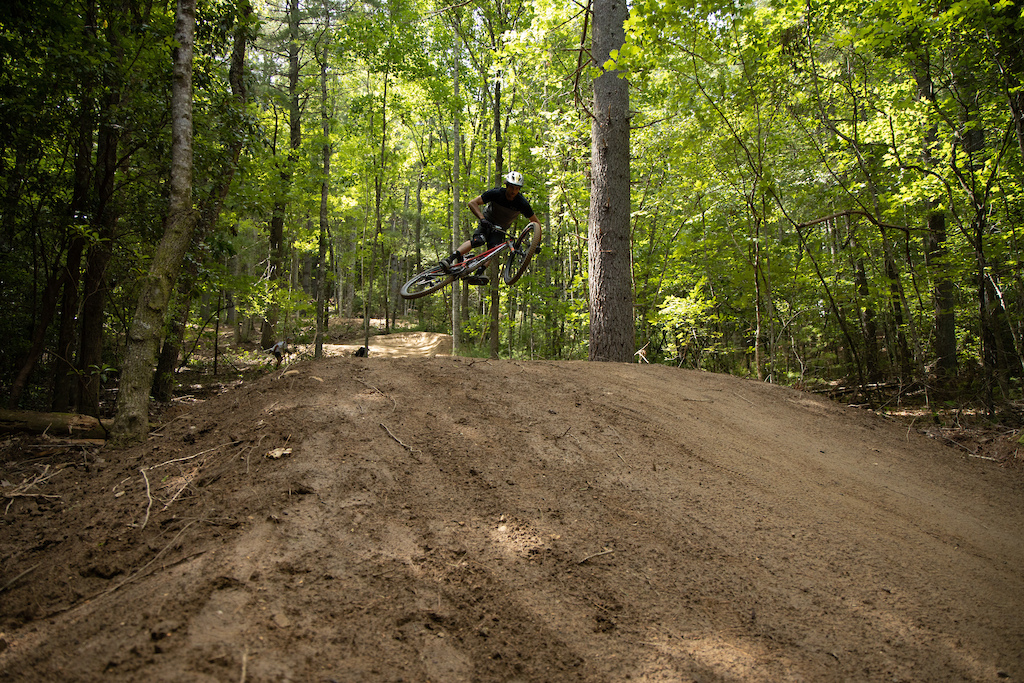 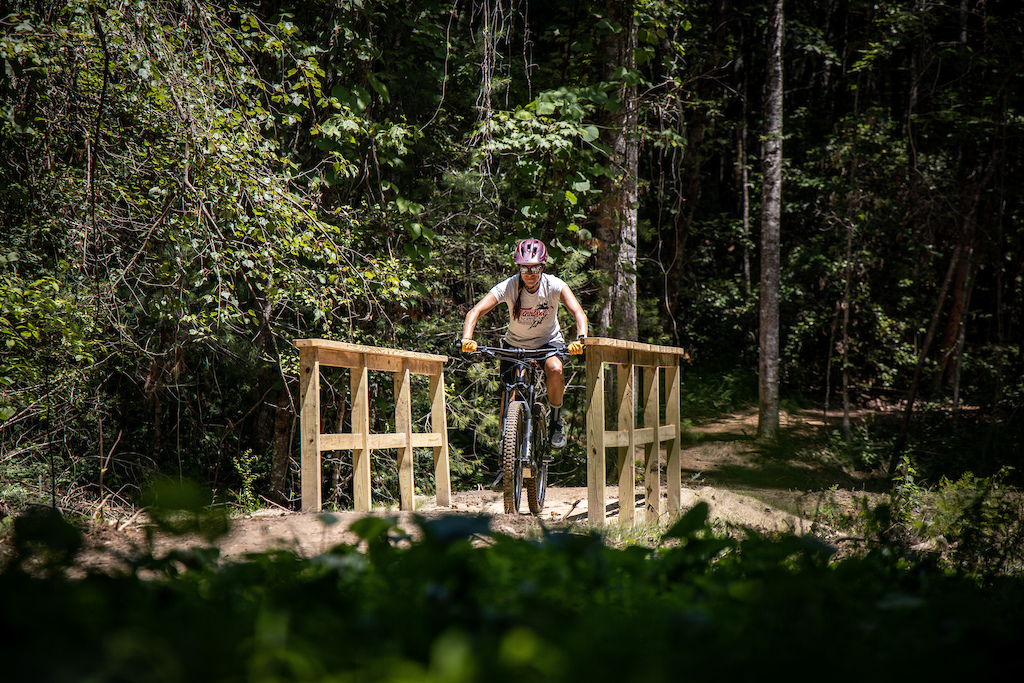 Kanuga is open to monthly and annual pass holders 24/7/365. The park will currently be open to day pass holders from Thursday to Sunday, 10 am to 6 pm. There will be eMTB rentals available and there is a "Pro Shop" where riders can find essentials for the day.

There are 10 trails, including one climbing trail with 520 vertical feet of drop from the top. There are three progressive jump trails, from green to black, handbuilt singletrack, and something to ride for everything from a hardtail to a downhill bike. The trails have been built with riding in mind and will be maintained by a trail crew on a daily basis. There are plans for Ride Kanuga to expand in the future to include an expanded bike shop and adventure center in 2021 along with more kids' trails, a skills park, more XC trails, and more trails on the mountain with more riding to come each year! 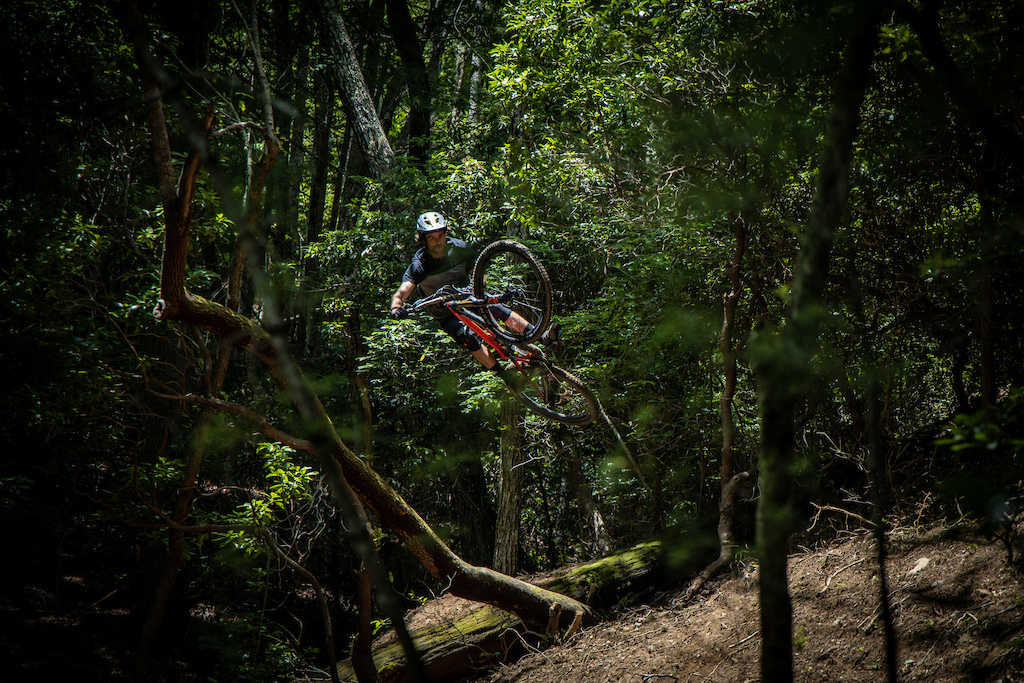 Trails range from jumps and flow to natural and raw. 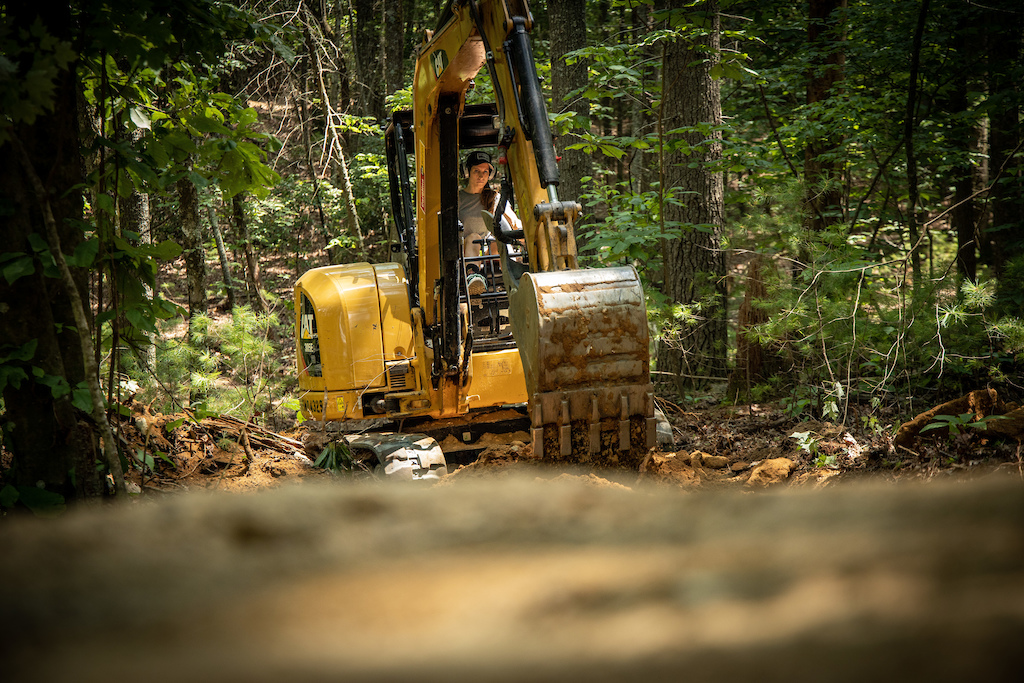 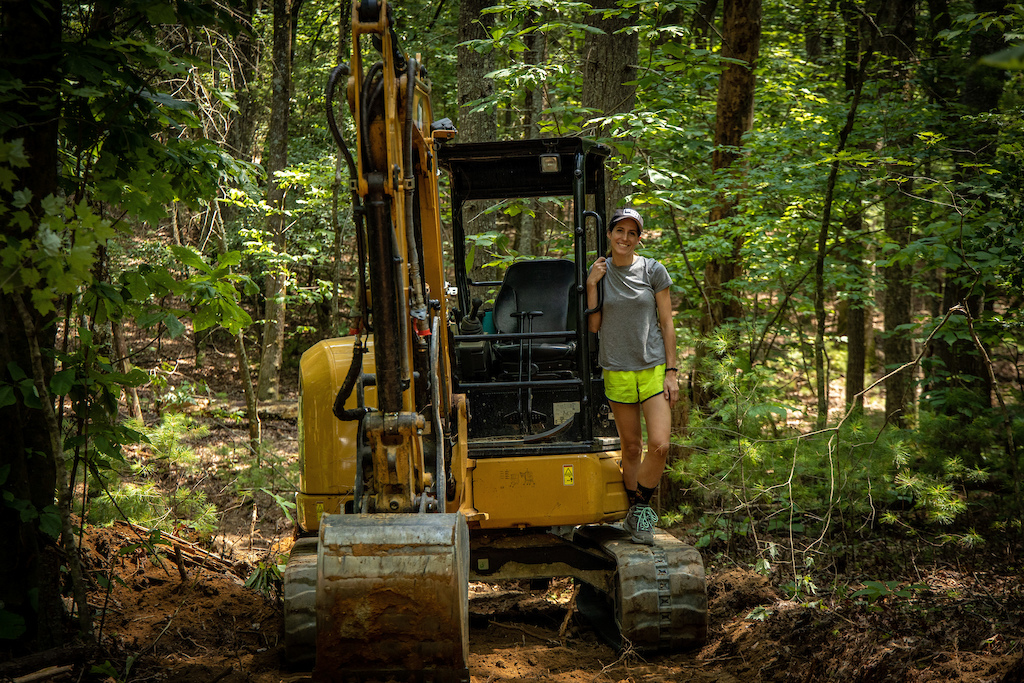 Callie Horwath was the lead operator on the High Rocks Climb, Evergreen, Rhodo Ruckus and GNCC trails and key in developing the bike park. 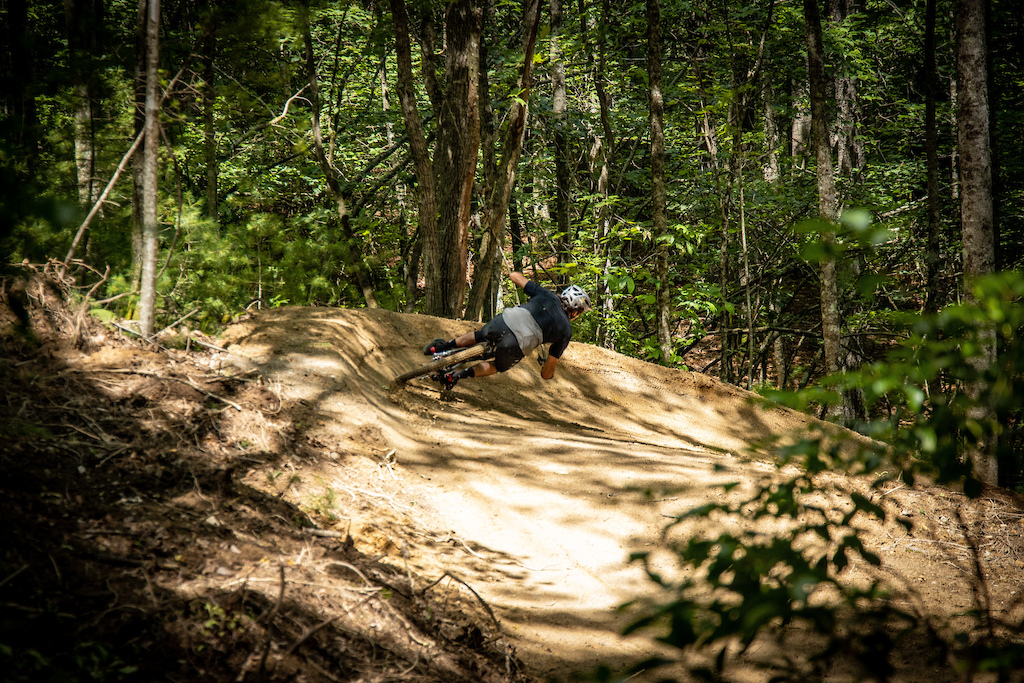 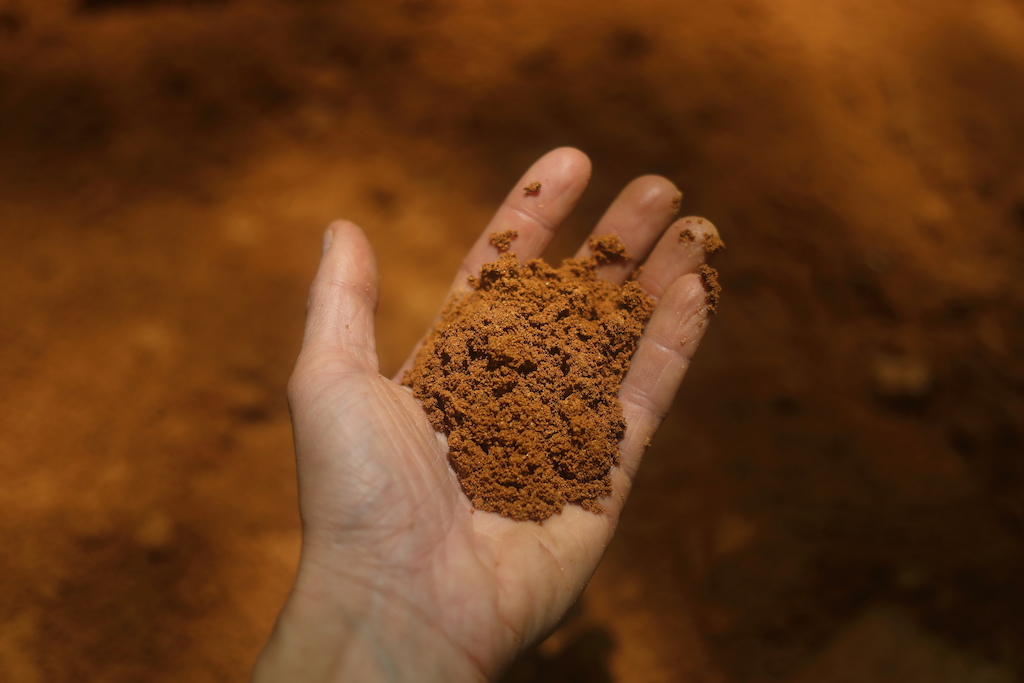 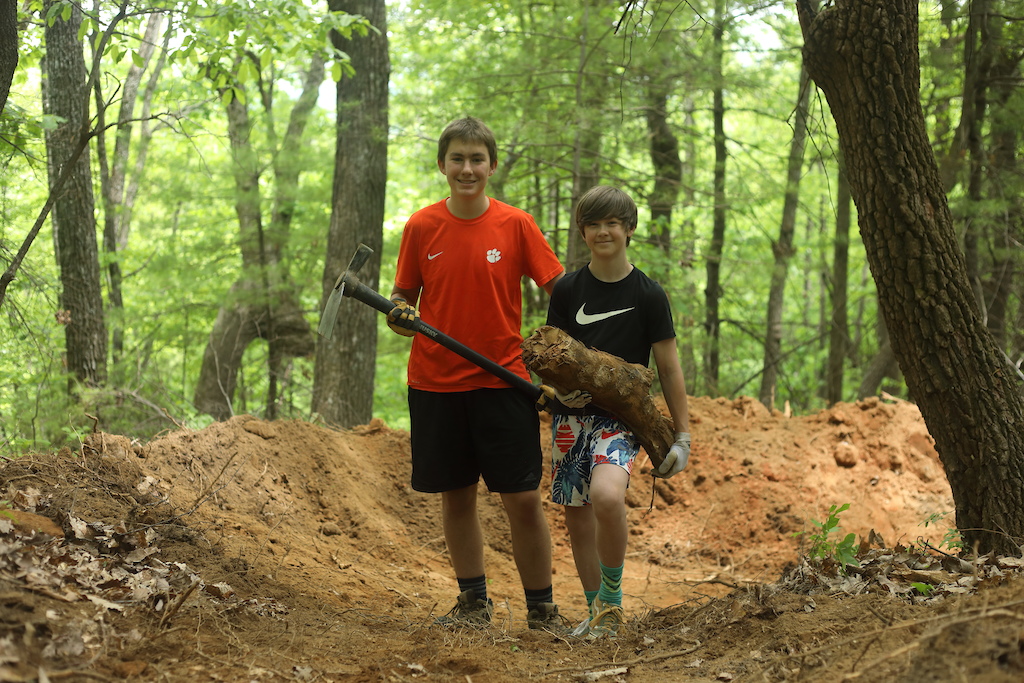 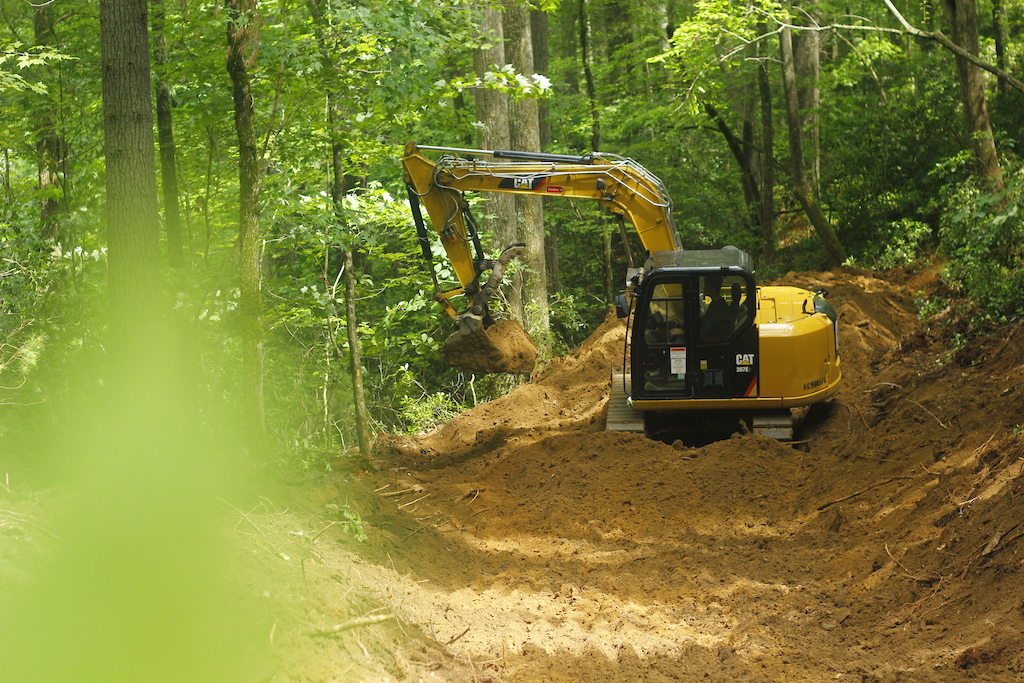 Kanuga offers trails for all skill levels with options for everyone, kid to adult. 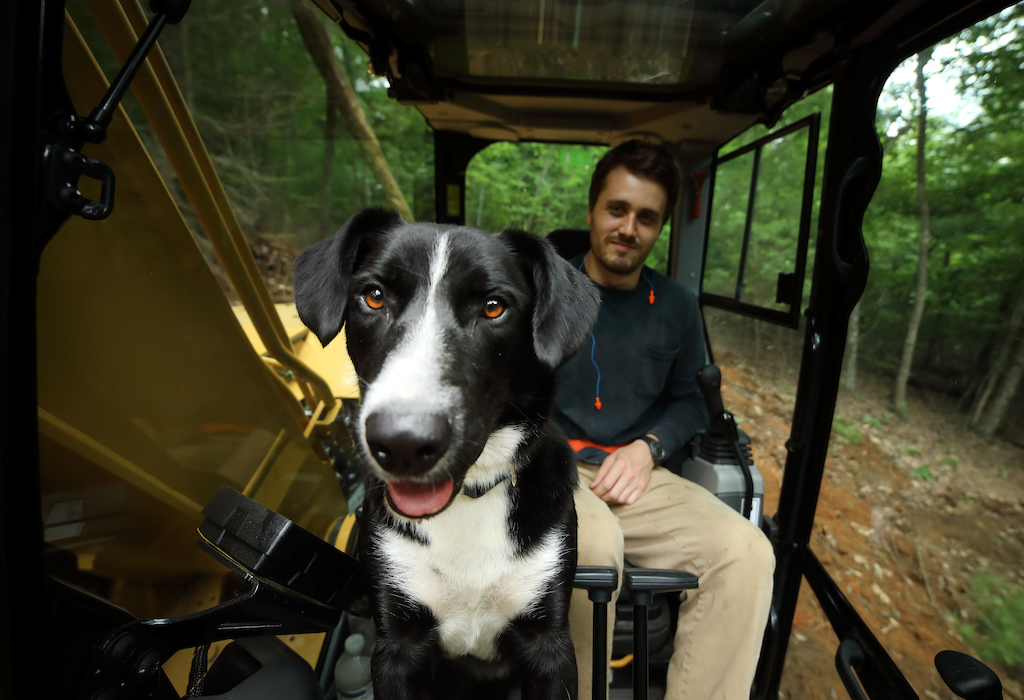 Isaac Leivsson and his pup, Casper spent a lot of hours on the mountain over the last few months.
Ride Kanuga will be open this Saturday at 10 am, with bike demos and food trucks all weekend.

Visit the gallery for more images from Ride Kanuga.

phillyforester (Jul 23, 2020 at 15:47)
That little tree hop jump looks suspiciously familiar to the one in this video: www.pinkbike.com/news/video-neko-and-logan-mulally-and-the-shaws-build-a-loamer.html

GlassGuy (Jul 24, 2020 at 7:20)
The only place I rode an ebike was in this area, and a lot of people had them, and I will add the ebike made the riding way more fun(meaning the trails weren't very interesting)

BigballmcCall (Jul 24, 2020 at 2:33)
Not much different than other places that are machine built downhill runs. Pedal up and blast down. It’s another year round place to ride big jumps and features. I guess the pay to pedal up is what rubs some, but it’s another option to have.

jfraz828 (Jul 23, 2020 at 16:49)
I guess I’ll find out this weekend, but I’m curious about the length and grade of the climb back up and how many loops an average non-ebike rider should expect to get in a few hours?

blowmyfuse (Jul 23, 2020 at 14:05)
Somebody was nice enough to load the trails so you can see elevation profiles onto Trailforks:

ridealltheb1kes (Jul 24, 2020 at 5:08)
This is awesome!! NC really knows whats up with whats up and doesn't hesitate. Too bad Virginia cant wrap their head around it.

giveherhell (Jul 24, 2020 at 13:26)
Don't they know ebikes are going to ruin trail access? How dare they open new trails which allow ebikes!

danielsapp Plus (Jul 24, 2020 at 4:38)
The climb is really mellow on a trail bike. I wouldn't say you even need to be much more than mildly fit although you may want to pack a little extra try hard in your backpack for the most fun...as is the case with most things.

pmhobson (Jul 24, 2020 at 7:55)
@Bigbobmegadeth: I believe the value proposition is that people in the area will have access to front-country machine built flow trails that are fundamentally different than the raw, techy back country trails that are more characteristic of western North Carolina.

weezer23 (Jul 25, 2020 at 8:10)
@Bigbobmegadeth: you are right, no reason for you to pay, so just stay at Windrock and stop bringing negativity to something that is great for our area. It is amazing that you people will find ANYTHING to complain about. We are so fortunate to have people in NC that are willing to take their own time and effort to build us amazing places to ride. I don't own an e-bike, so I plan on riding this place and pedaling my rig uphill just like I do everywhere else that I ride and I also do not mind one bit paying a fee to help the people who are using their time to bring us great places to ride...so in other words quit being a tool, if you don't want to pay and pedal uphill then go shuttle somewhere else. It is that simple...

It's a free country and everyone is allowed to have discourse and debate. No one has to agree with your mindset. Heck, we could have a drink and talk about it but online you can try to silence other mindsets?

Bigbobmegadeth (Jul 28, 2020 at 7:35)
I’ll probably still ride there once and then, like most people, realize the hour+ drive to ride 3 to 4 laps and get tired isn’t worth it. I’m in good shape, normally falling in the top 1/3 on Strava, but I don’t wanna climb 10 miles in a day. I understand the concept, and benefits to the community, and I actually hope I’m wrong. But my prediction is that this place will be a ghost town a couple years from now when people go back to riding lift serviced parks. Maybe when ebike cost is marginally different than traditional pedal bikes this place will thrive, but the cost differential is significant.

The barriers for entry into mountain biking are high enough, I don’t see how making them higher is a good business decision. Feels like the land owner just wanted to justify his pandemic assistance loan or grant.

blowmyfuse (Jul 28, 2020 at 12:22)
@Bigbobmegadeth: Not sure how the park and the camp are structured as business entities, but I do know the park owner/backer @davelamond is good people and goes out of his way to help others.

After what happened to me this morning in Bent Creek, doubt I'll ever spend a dime there. A guy pushed past me behind the lake on an e-bike FLYING up the steepest hill like it was nothing. Bike was noisy, whirring and whining and he was GONE in an instant.
I live maybe 40 minutes from it, have no desire to rent or buy an e-bike or see someone on one pass me twice in 1 climb to the top, especially both of us paying the same access fee
.
If I'm bombing descents only, it's gonna be a shuttle/lift and max runs I can get.

Otherwise, I'll spend my climbing juice in the quiet of Pisgah where ebikes are illegal and I can relax my mind on the ups and fill my spirits on the downs.

So if e-bikers want to go there to do their laps, fine. If the guy who was poaching Bent Creek wants to do it again in Bent Creek, I know what they sound like and plan to put him in the ditch.